Former World road champion Claude Criquielion lost his last battle and passed away on Wednesday morning, 18th February 2015, at only 58 years old. Ed Hood takes a look at the man from Lessines’ life and career, and what his contemporaries in the peloton thought of him. There was so much more to Claudy than that crash in Ronse. 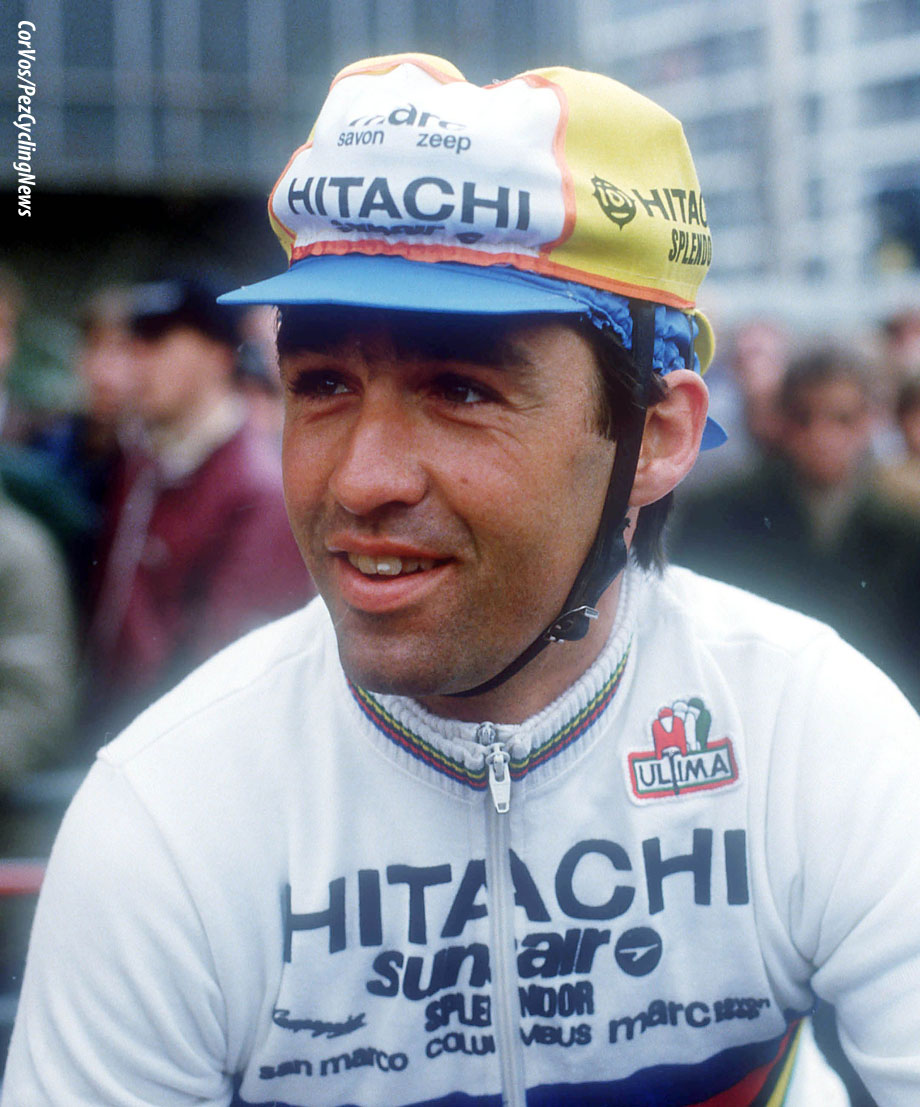 The death of Claude Criquielion was announced to me in a simple text message from my English friend, Ian Whitehead who lives in Gent; ‘Claudy has died.’

During the night of 15/16 February 2015, Criquielion suffered a stroke and was hospitalised in critical condition; he died at 9:00 am on 18 February 2015 in the hospital in Aalst, Belgium of a severe brain haemorrhage. 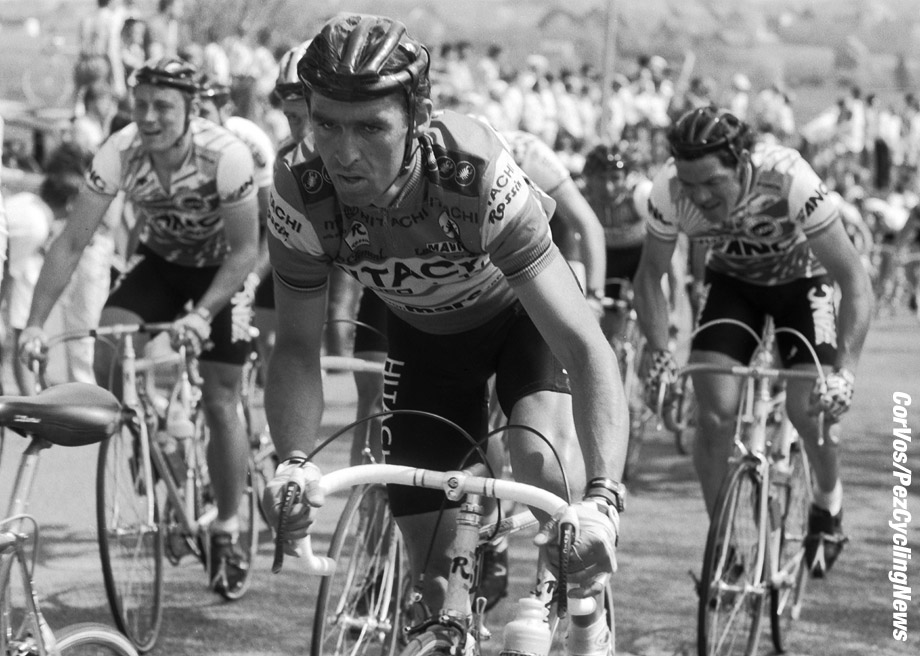 A Champion’s Aura
It’s unfortunate that the mental image most people have of one of the most talented riders of a generation of great riders is of a shattered, disconsolate Criquielion dragging his bike across the line on foot at the end of the 1988 World Professional Road Race Championships in Ronse, Belgium after clashing with Steve Bauer of Canada in the closing metres when the usually smiling man from Lessines looked to be en route to his second World Professional Road Race Championship. 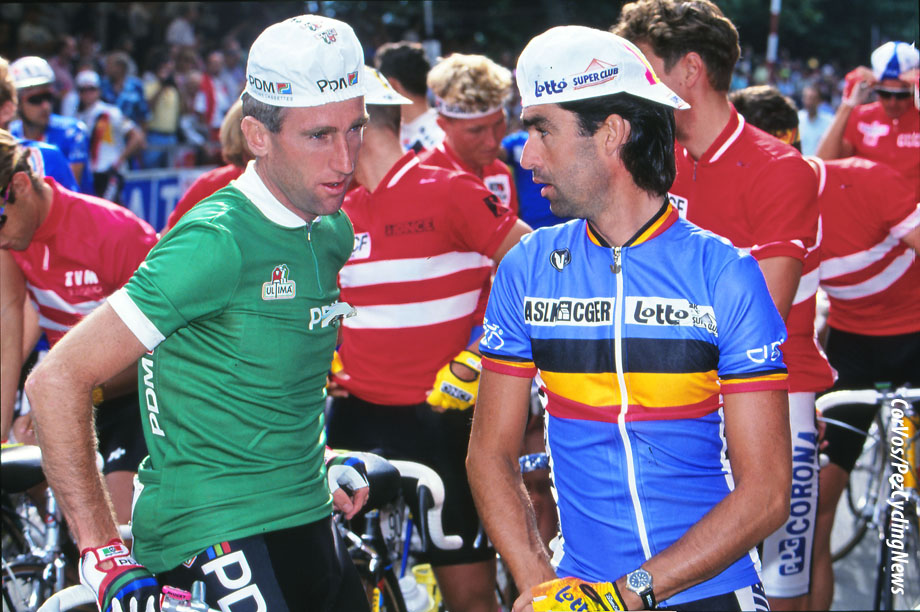 Claude and Sean at the Worlds

Not so for me, I was fortunate enough to be road side with my friend Dave Chapman for the 75 kilometre Sarrebourg to Strasbourg time trial stage 8 of the 1985 Tour de France where Hinault demolished the best riders in the world by more than two minutes and tore the yellow jersey from the back of Denmark’s Kim Andersen. I have two over riding memories of that day; the demonic look in Hinault’s eye as he hurtled past me, just inches away, through the funnel of over-excited fans.

And how Claude Criquielion looked as he rode the course as part of his pre-race preparation. He passed us three times that day, once in the race – where he finished in 14th spot – and twice prior to the race on his warm-up, once behind the team car and once ‘en seule.’ With the distance of the time test being a massive 75km he wouldn’t have ridden the whole course twice but would have been familiarising himself with the technical second part of the parcours. 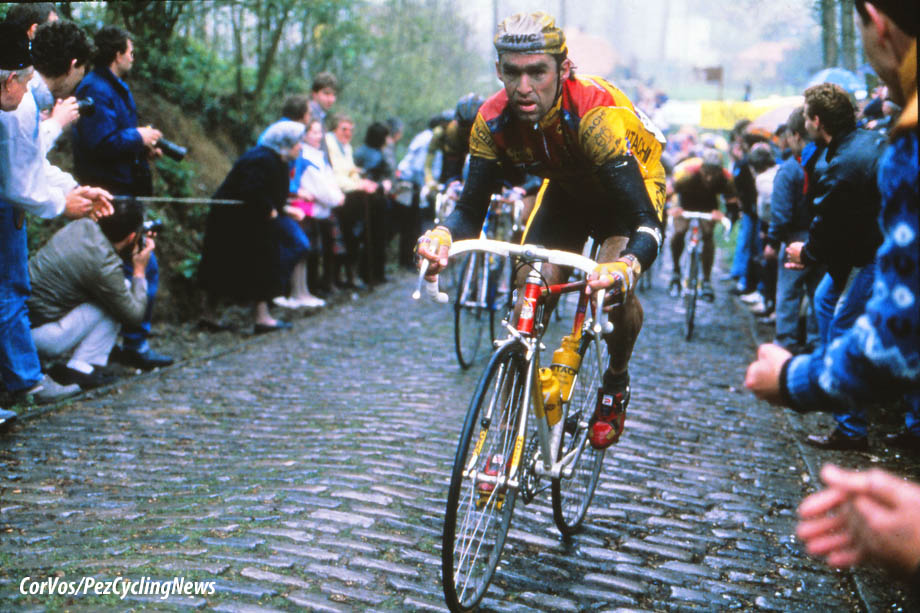 His legs were bare but oiled; the colour of teak – with his dark skin and jet black hair he always had a magnificent tan – which made his long sleeved Hitachi world champion’s top seem impossibly white, almost as if illuminated from within. His ‘Oppy’ cap was perched on that thick black hair in the casual manner that only the coolest guys can achieve and his position on the bike was relaxed, perfect, at one with the machine. He looked a million dollars, even if you had no idea about cycling or the rainbow jersey you’d take one look at this man and think, ‘wow!’

He had that aura that only the very best do. 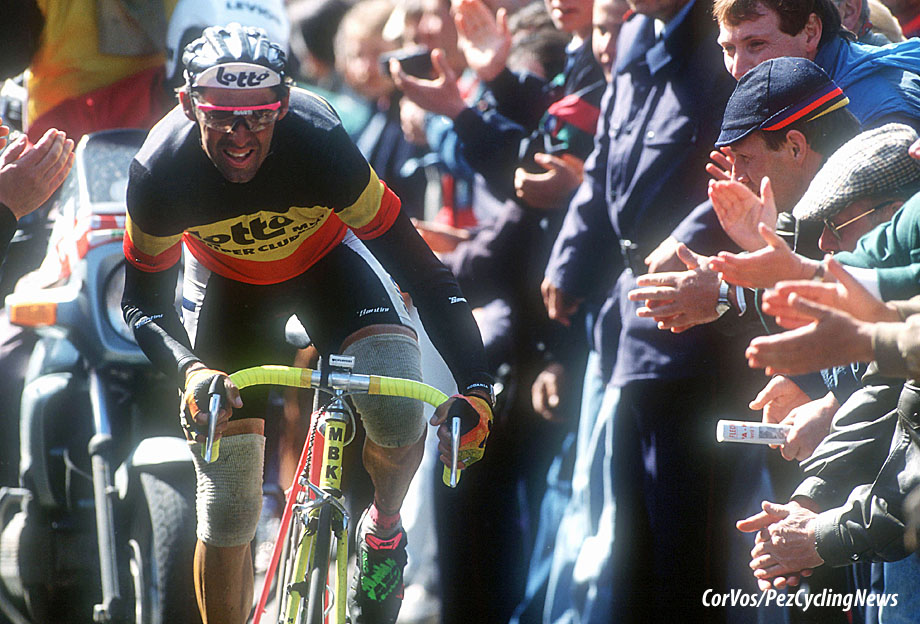 A Champion’s Palmarès
It was 1977 when he first served notice of his talent with a stage win in the Tour de l’Avenir, then, as now one of the world’s main proving grounds for amateurs with big dreams. The following year he was second in the GP Faber in Luxembourg behind Etienne de Wilde but ahead of Fons de Wolf – all three would leave their mark on world cycling. He was also top ten on GC in the l’Avenir and GP Tell in Switzerland. 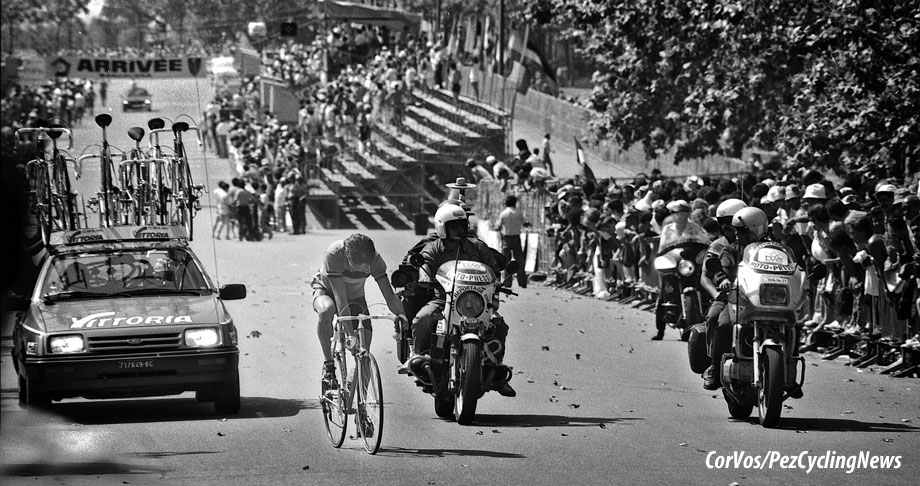 Climbing Montjuich for a rainbow jersey

His neo-pro year in ’79 for Kas was nothing short of sensational with a top ten finish in le Tour and overall wins in the Setmana Catalana and Escalada a Montjuich. For season 1980 he was back to Belgium and Splendor-Admiral with stage wins in Tirreno-Adriatico, le Dauphine and an excellent third on GC in the Vuelta which would be his best ever Grand Tour result. That year also saw him 13th in le Tour.

If ’81 was less spectacular there was still a top ten finish in le Tour and a win in the GP Paul Borremans in the colours of Wickes-Splendor. The name on the jersey was the same for ’82 and there was a win in the tough Brabantse Pijl. It was Splendor-Euroshop for ’83 and ‘only’ a top 20 placing in le Tour but victory in the Clásica San Sebastián. 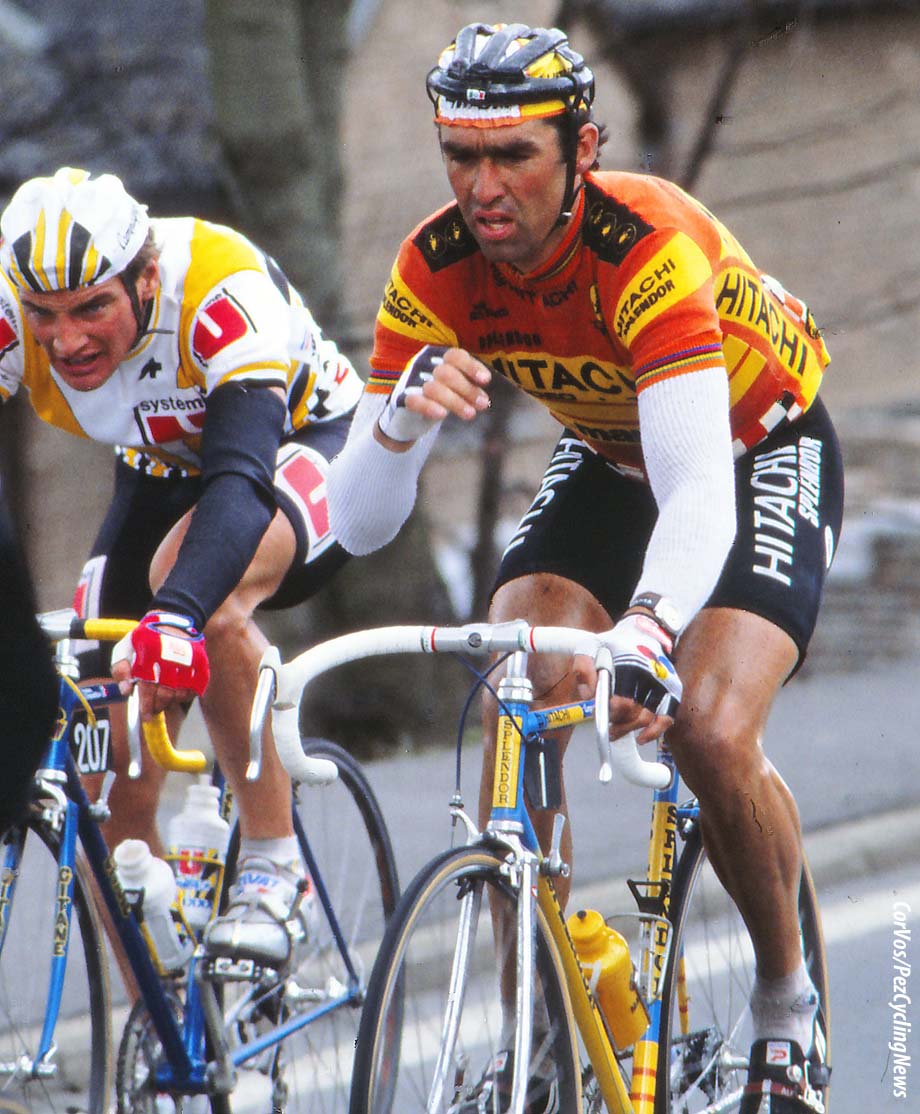 The ’84 season with Splendor was his greatest; another top ten in le Tour, another win in the Escalada and victory in the GP Merckx – with the latter two seeing the rainbow jersey upon his back after his magnificent win in the Worlds on the brutal Montjuich circuit in Barcelona. In 1985 he continued to build his credentials as a ‘man of the Classics’ in the colours of Hitachi-Splendor with a win in Flèche Wallone – and a top 20 spot in le Tour. In ’86, still in the same livery, he took two beautiful overall stage race wins – the Midi Libre and Tour of Romandie. 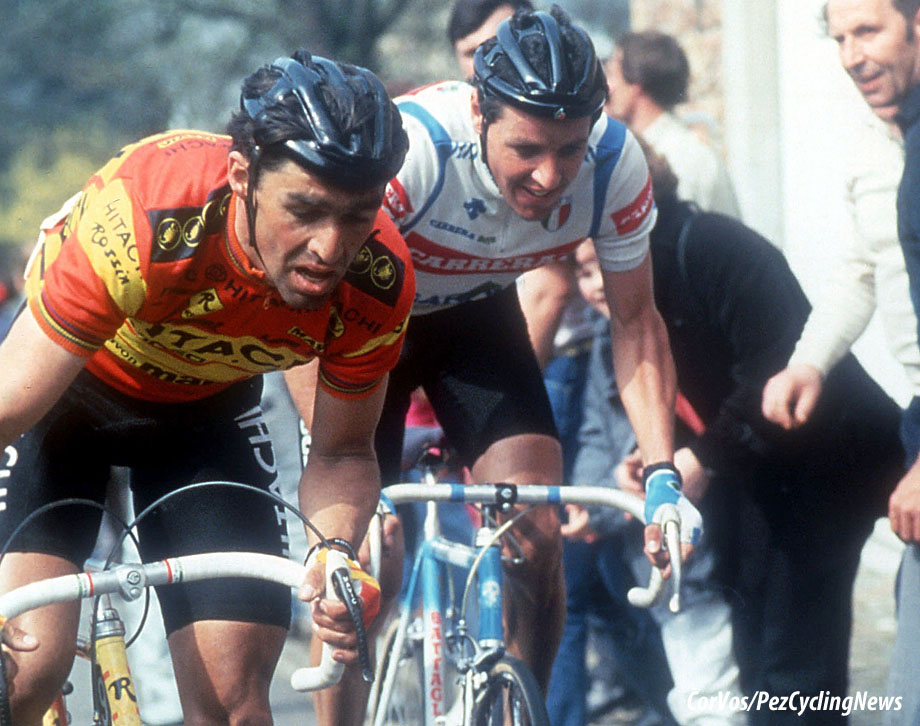 Stephen Roche and Criquielion clashed many times in Flèche and Liege

Classics and shorter stage races were his forte; his brilliant ninth in le Tour as a neo-pro was a curse in disguise, creating a huge expectation and pressure from the Belgian public and media for a Grand Tour win which was never going to happen given that his talents lay elsewhere. If his ‘Belgian Legend’ status was in doubt up until this point he made sure there it was cast in stone in ’87, winning le Samyn and the Tour of Flanders for Hitachi – and there was an 11th spot in le Tour. 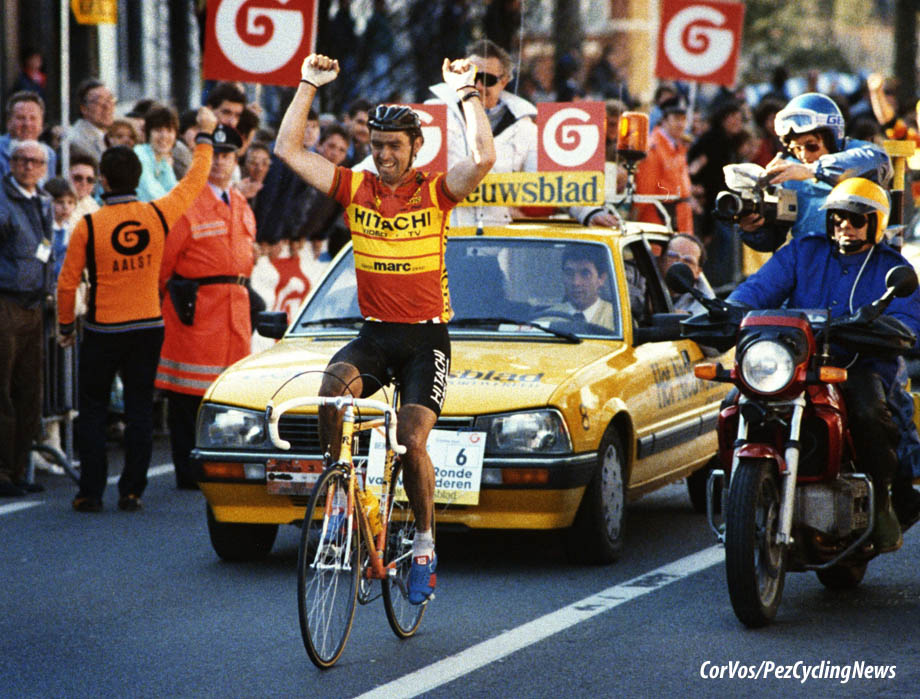 For ’88 there were Bosal exhaust systems sharing the maillot with Hitachi but Claudy just kept on winning – with the Midi Libre going his way and another top 20 in le Tour. In ’89, still with Hitachi, he added another Flèche Wallone to his glittering palmarès but fared poorly in le Tour in 36th spot. The Lotto jersey for ’90 may have been less chic than he was used to but he soon swapped it for the Belgian National Champions jersey which he wore to yet another top ten Tour finish. 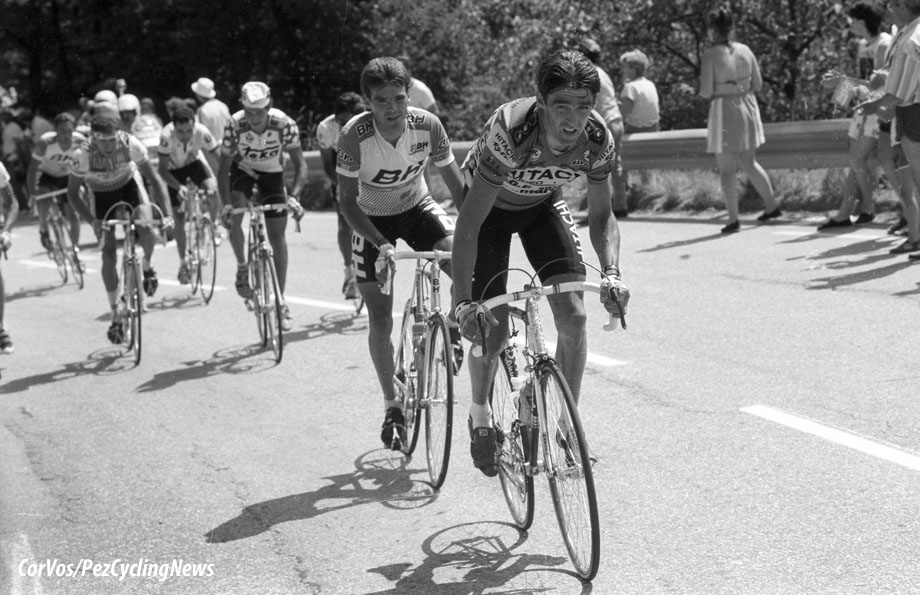 Always a good performer at the Tour de France

His final season was ’91, still with Lotto; and no one will ever accuse Claude Criquielion of having ridden the dreaded ‘one season too many’ – only the brilliant Italian Moreno Argentin was able to best the Belgian in the Flèche Wallone and again in Liege-Bastogne-Liege.

His palmarès display Criquielion’s extraordinary talent and versatility but are only a fraction of a career which saw 64 professional wins and dozens of podium finishes. 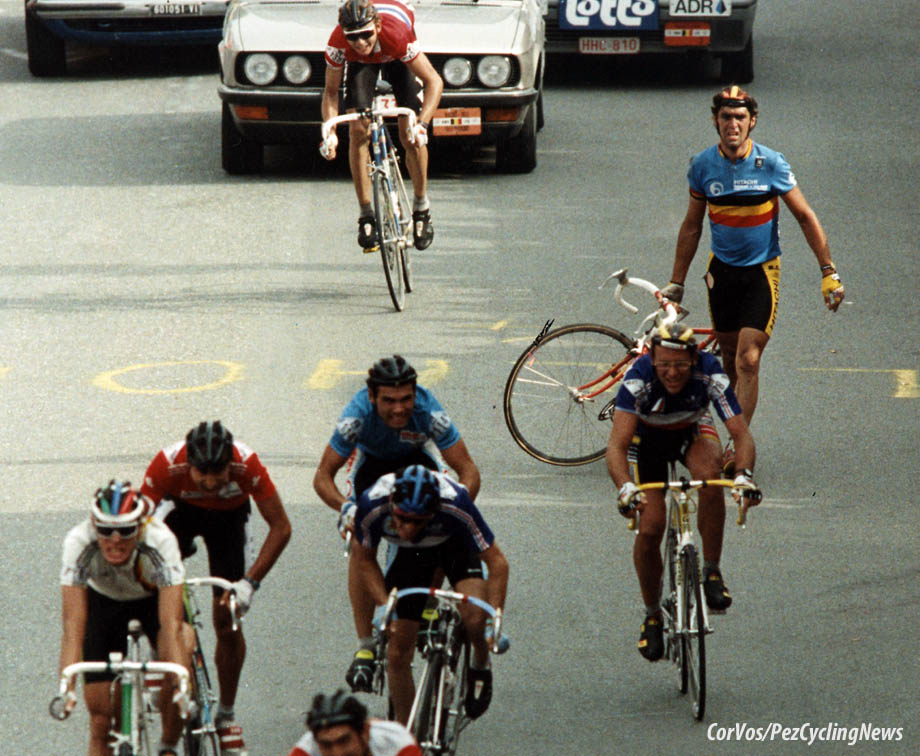 But no obituary for Claudy can ignore the events in Ronse in the late summer of 1988 for which most remember him. Ace photographer John Pierce was there and remembers it like this;

“There were three of them clear; Fondriest, Bauer and Criq as they entered the finale but Fondriest was way too far back and was set for third, Criquielion went for the long sprint to one side and had the legs because it was uphill and his morale was sky high with it being in Belgium; Bauer instead of sprinting ahead, shot sideways – as if to get on Criq’s wheel – but hit him broadside with his arm under Criq’s ribs – Criq went airborne, right off the ground, bike and all.”

Bauer was disqualified and Fondriest won; Criquielion took the affair to court on the grounds that Bauer’s actions were deliberate and had cost the Belgian a fortune in lost earnings. He lost the case; it’s up to you to form your opinion on the crash which you can see here: 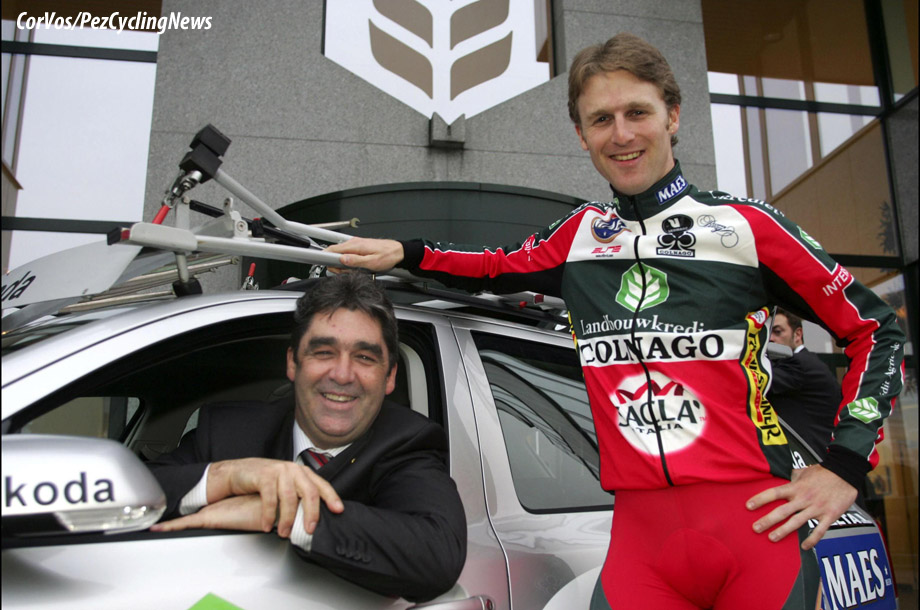 Retirement
Criquielion hung up his wheels in 1991, but stayed involved with cycling and became directeur sportif of the Lotto-Adecco team from 2000 to 2004. His son, Mathieu Criquielion, turned professional for the Landbouwkrediet-Colnago team in 2005; Claude Criquielion became the team’s manager.

From 2006 until his death Criquielion was an alderman in his home town of Lessines for the liberal Reformist Movement which is a conservative/liberal French-speaking political party in Belgium. 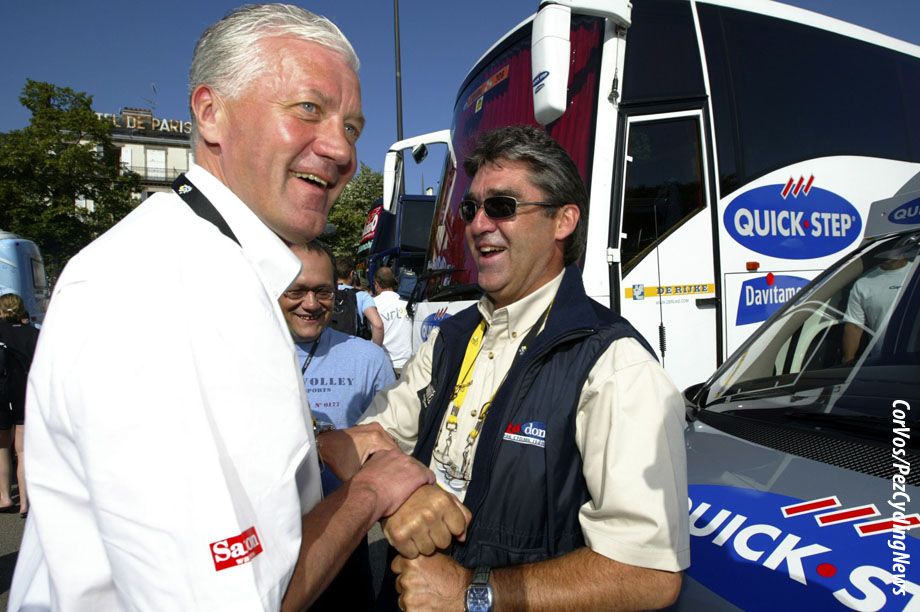 Fondly Remembered
Our friend Ivan who’s fluent in Flemish and has followed the Belgian race scene for some 40 years has kindly translated a few of the tributes being paid to Criquielion in Belgium.

Freddy Maertens, Johan Museeuw and Carlo Bomans all spoke warmly of Claudy; seemingly he was a really nice guy, easy going, always up for a laugh, Freddy thought he was a great rider and Museeuw said he learned a lot about training from him as a young rider.

Meanwhile his friend and former rival; a very emotional Eddy Planckaert said Criquielion was an amiable man, pleasant to be around, helpful to others, a real family man, happiest at home with his wife and children, in some ways too easy going a character for the sport of cycling, he would be a super star with his palmarès today, it’s sad that he was so underrated and people only wanted to talk about Ronse 1988, while his victory at Barcelona in 1984 was magnificent and overlooked as a result of Ronse. 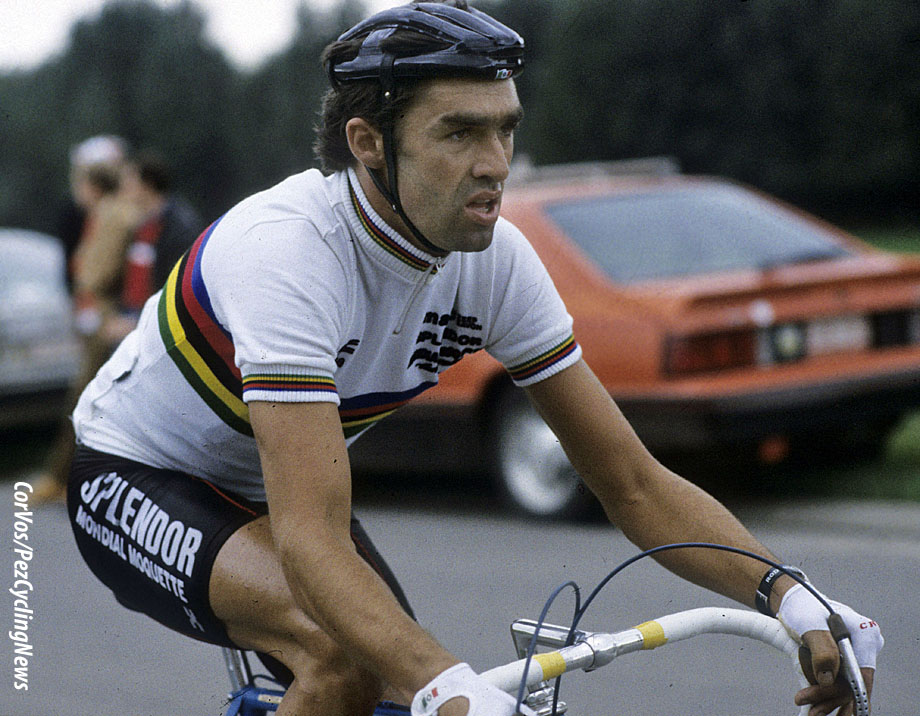 According to Planckaert, Criquielion never got over the Ronse incident and carried the anguish of it to his grave; Planckaert said that after he beat Steve Bauer for Paris-Roubaix in 1990 Criquielion later told him he was happy that he had beaten Bauer. 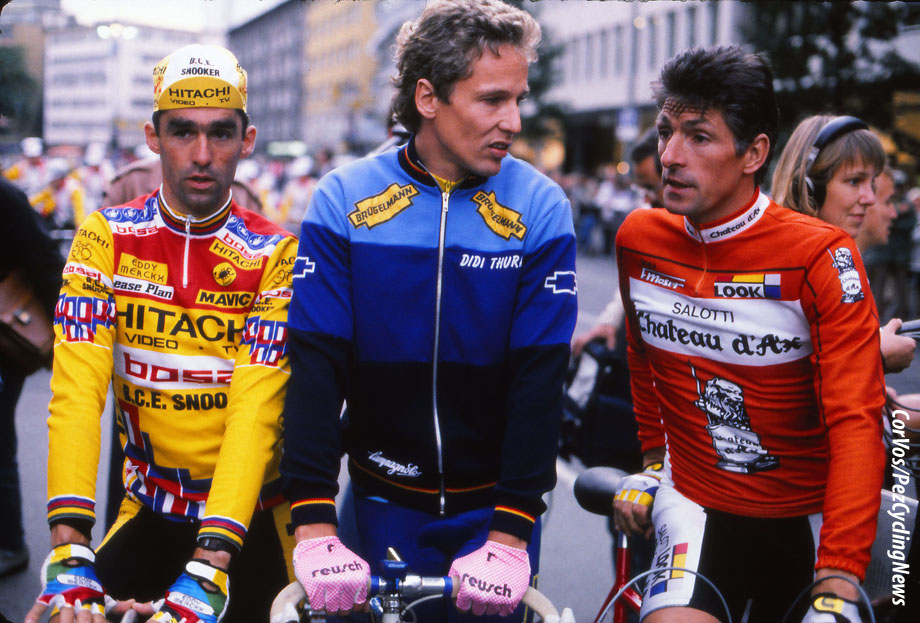 Veteran, highly respected Belgian cycling journalist and pundit, Mark Vanlombeek said that Criquielion’s unsuccessful legal action against Bauer after Ronse affected him hugely; especially the judge’s ruling that Bauer had not deviated from his line in the sprint, but that the barriers narrowed towards the line causing CC to crash, a ridiculous ruling according to Vanlombeek.

A few journalist from the Belgian Sporza Agency asked Planckaert, Vanlombeek and former Tour green jersey winner, Frank Hoste if Criquielion could be compared to any rider today, only Hoste suggested a rider – Phil Gilbert.

Ivan thinks that’s a fair comparison, even if we find it difficult to compare across generations.

Hoste also compared Criquielion to Hinault and Fignon in the way he rode, always aggressive, always attacking, never a calculator, Hoste was super-impressed by Criquielion’s Ronde win, he said Criquielion wasn’t good on the approach to the climbs in that he started them too far down but always got back to the front over the top – he did that all day and then left everyone for dead on the Muur to win Belgium’s biggest race. 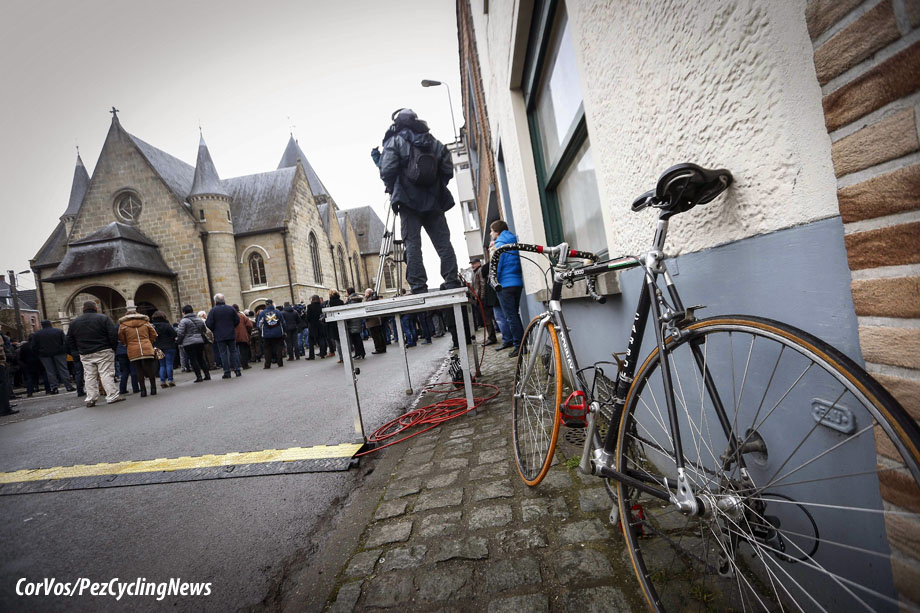