ROADSIDE DAVE: Does the TOMRV

Last seen at the Tour de Georgia emulating our heros and legends – Roadside Dave has resurfaced! This time just back from another awesome adventure in Mississippi, where he joined 1500 rider at the Tour of the Mississippi River Valley.

Finally, after resuscitating a near dead season, it was time for a hard weekend of training. Normally, it’s training around my work schedule during the week, and hitting the races on the weekends, much like any other lowly amateur. After shelving some of my idiot behavior from the early season (I like to go out and have fun, so sue me) I had begun to at least finish races with the front groups. In my last criterium, I even made a little jump off the front, a move which last year became trademark for me. Now, with my sights set on a particular race at the end of June, it’s time to buckle down and pour some miles in my legs.

Winding roads, no traffic, and mostly blue skies make the TOMRV a must-do.

I was lucky to hear about this ride up the Mississippi river from friends of mine called TOMRV (Tour Of The Mississippi River Valley), and it just so happened to fall on a race-free weekend. Normally, this had conflicted with the Peoria Cycling Classic, and I had never attended. This year, being free and clear and in need of a big ride, I headed off to Dekalb, Ill, (thanks to Professor Reynolds for the parking spot, and the Colt 45) to rendezvous with the faithful Evil teammate Bear, and head on from there to Bettendorf, IA.

TOMRV, held by the Quad Cities Bicycle Club, is in its 27th year and it’s rather popular. Roughly 1,500 cyclists turn out each year to ride the hilly yet scenic roads along the glacier cut river. From benign flats to scenic, challenging bluffs, the mileage and the terrain of TOMRV issues a challenge to all who tackle it; from the pissant racers like me, to the older fitness nuts who come to take on the ride. I read some stats somewhere, and these are now approximations: the youngest rider was 14, the oldest 70 something.

Every manner of beast turned up. Mostly roadies, but there were recumbent riders, tandems, a few knobby tired riders, some hybrids, your basic cycling mish mash. The first day was to be 106 miles (although a shorter route option is available), from Bettendorf north to Dubuque, IA, where we would camp at a community college. The second day was a return leg to Bettendorf, but it was a little shorter, at 86 miles. “Perfect training”, I thought, as I picked up the meaty and mildly pungent Bear and we drove on to Iowa. Bear was a veteran of TOMRV and many Ragbrai’s, so I knew I could hang with the old boy, have some fun, and ride well. His knee problems of last year were gone, and he was riding well atop his Sycip. I opted for the Salsa Campeon, and put a 27-tooth cassette on the back, so to ensure not flogging myself on the formidable climbs.

The mighty Bear, from the lens and frame-eye view of Dave’s front wheel.

DAY 1
After a restless night’s sleep, complete with a neo-tornado, a vicious rainstorm, and then oppressive heat, it was time to get up and go. Tents broken down and packed into my car, we headed off north, in search of Dubuque. The weather had cleared, the temps climbed and hovered in the low to mid 80’s, and we basked in the sunshine. The first bits of road were nice and rolling as we eyed the river to our right, with a lick of a tailwind at our back.

As is typical of these sorts of things, riders find like-minded riders, and it wasn’t long before we Evils had hooked up with a crew of competent riders from the St. Louis area. Our group pedaled ahead for the first 50 miles or so, before it was imperative that we stop at a bar right on the riverfront, and drink from the chalice that is Pabst Blue Ribbon. Then it was on to the lunch stop on the Illinois side of the river. True fun it was to ride over the metal bridge, look down to see the Mississippi rolling by underneath us, a touch of vertigo had by all. 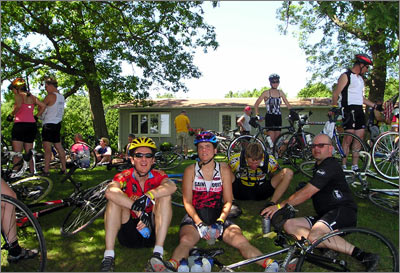 Very well stocked rest stops are a standout of the TOMRV, allowing full-relaxation between pulls.

One thing about TOMRV, they really have the support nailed down. Bountiful rest stops provided a veritable smorgasbord of cycling goodies: Gorp (trail mix, Iowans just have their own name for it), bananas and fresh fruit of all sorts, peanut butter bagels, crackers, chocolate, soda, water and Allsport, and the lunch stops came complete with Subway sandwiches – and all of it was all you could eat and/or carry. Hats off to the organizers, and especially to the volunteers who helped man these posts.

Some rest stops had the local old boys clubs like the Lions or Moose, selling grilled goods. This was where Bear would immediately dismount, lured by the smell of cooked meat. I’ll admit I wasn’t far behind him. You ain’t lived ‘til you’ve eaten an Iowa pork chop, kid. The only problem at these stops, and I am sure ALL of the other riders will agree, is that Iowa has a big problem right now with their gnat population. Clouds of them plagued us all, and all around one could see lycra-clad folks of all sorts, spasmodically waving their hands around their heads as they tried to eat.

Back on the road, it was now time for the mean road to start. Out of the lunch stop, into the quaint and beautiful town of Galena, and up the treacherous Chestnut Mountain, a ski resort. Up, up and away we went, climbing, climbing, and more climbing. Where the hell am I? Back in Georgia? All the pulling of the early day had taken it’s toll, and I was now languishing off the back of the rest of our group, laboring to turn my 27, finally recovering and spinning out the rest of it.

By mile 95, I had had enough of this silly bicycle. I was ready for the vaunted buffet dinner that was so highly touted, and a warm shower. Salt caked my face, my chamois butter had long since been evaporated or absorbed, and the road just kept going up. Back over the river into Dubuque, on the wheel of the Bear, what a sight. We were spared the traditional climb of Dubuque’s “Wall” because it was under construction. Fine by me. The shower ruled, the buffet was impressive and very tasty, and bed was right around sundown. I was shot after the ride. 105.14 miles, average speed of 17.5mph in just over 6 hours. Day 2: Where is everyone? On second thought, who cares…?

Day 2
Boy, I really needed that solid rest. From about 9 until 6:30, I slept like never before, as evidenced by the plentiful mosquito bites on my exposed areas (damn tent) that I never noticed while they were being delivered. One lucky mosquito must have tipped off his pals, for a party started and they feasted on my neck and ears. Today, they still itch, I assure you. Upon rising, Mother Nature had decided the campus of Clark College needed a bath, and she opened the taps at about 7:00am. Buckets of windless rain came straight down, and I began to layer appropriately for the day.

We set off for Bettendorf bundled like schoolchildren. Sure enough – and I take the blame for this as Murphy’s Law is mostly mine – as soon as we left town, the skies almost immediately cleared. From the first rest stop’s bluff, we could see patches of indecisive weather all around the horizon, but for us, it was sunshine. Off came the layers, stuffing them into each pocket and up the back of my wind vest. Great, nothing like extra stuff to carry.

We climbed out of the Dubuque area for the first 15 miles or so, up long, gradual climbs. Not the killers of yesterday, but certainly longer. The group of yesterday was splintered between those who had agendas and timeframes, and fellows like myself, Bear, and Hacky Jedi (another St. Louis product), who did not. So, without a need for speed, and with a wicked crosswind, we set about being the last riders on the road, stopping frequently in all towns, making friends, and being the last jag-o-loneys to sneak into the support stops, some of which were literally closing up as we rolled in. At times we wondered if we were on the right road, as there wasn’t another pair of wheels to be seen. I put myself on the front of our trio for most of it, pulled at a leisurely 18mph or so in the crosswind, and enjoyed the relatively flat back half of the day’s ride. 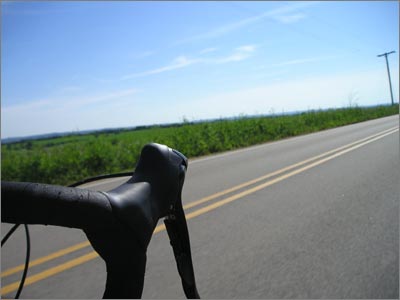 Life should always be this simple –just your bike, the open road, and you taking a one-handed snapshot while pedalling…

The beauty of the river valley is all around when on TOMRV. All of the small towns, the outrageously friendly people, the scenery, the challenging riding, and the food make TOMRV a touring cyclist’s dream. And hey, it can be good mid season training for the racers, too!

Info can be found at www.qcbc.org/tomrv/ – go check it out!

TOMRV SPECIAL FEATURES
– We provide a bike lockup at Clarke with a guard overnight.
– We use wristbands and baggage tags. The wristband and one baggage tag is included with your registration. TOMRV will not serve you at rest stops without a wristband and will not transport baggage without a baggage tag.
– We provide each rider with a fanny bumper , a tag for your bike. We will label it with your name or nickname and with the number of prior TOMRVs ridden.
– Every registered TOMRV rider receives a free T-shirt and is eligible for over $3,000 in door prizes .
-Beer garden
– Showers are available at the end of the ride on Sunday