Greetings from Helen, Georgia! I thought there was a good possibility I’d be dead long before I got a shot to add another entry to this year’s roadside view of the Tour de Georgia. Fortunately, I’ve been spared and contrary to yesterday’s dismal performance and subsequent total implosion, which came complete with long night time transfer to the next hotel, today was an absolute polar opposite.

The first real mountain stage was not as deadly to me as I thought as the legs worked, and worked wonderfully. The transfer tonight was short and easy, I get to stay in this funky ass cool hotel for two whole nights without moving again, and to top it off, we ate dinner as a group at the palatial Frogtown Cellars winery.

In the morning, we piled yet again into the vehicles and transferred to the top of the first climb of the day, and despite early signs that indicated I was not wanted…

… we suited up and headed off. The sweeping initial descent hinted at the beauty to come on the long climbs ahead. The switchbacks came in waves… 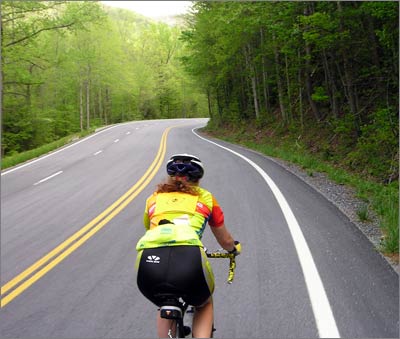 … as we ascended into the Georgia sky, up past tall trees, running streams below, and spectators, eager to grab up good spots on the roadside by which to maybe catch a glimpse of their favorite. Some locals were just curious onlookers, here for the festivities.

As the first climb began, I happened upon K.W. and Kay, who offered me a few sips of a glorious Bloody Mary and a bit of good old southern chit-chat.

It was Tour-like, except instead of a variety of international flags, you got several Confederate flags hanging from the old dilapidated buildings and small oddball shops dotting the landscape of lush vegetation. No ski villages or chalets in Georgia.

To say that the scenery in the North Georgia Mountains is stunningly beautiful would be a brash understatement.

Today’s three mountain passes, which would be conquered by Jason McCartney in impressive fashion shattering the whole peloton in the process, provided some of the most beautiful imagery as well as some tough climbing for myself and the rest of the Discover Adventures group.

I seemed to have brokered successfully for my intestines and fortitude during the night, as all systems were go as we rode good tempo uphill, and hammered the technical and exciting descents. I had mistakenly called the worst climb of the day Hog Pen in previous articles, and I wish to correct that. It was Wolf Pen. Wolves, Hogs, both mean. So mean, in fact, that I employed a 27 tooth cluster. I even orchestrated this picture of me leading Vic “The Missile” up a climb… 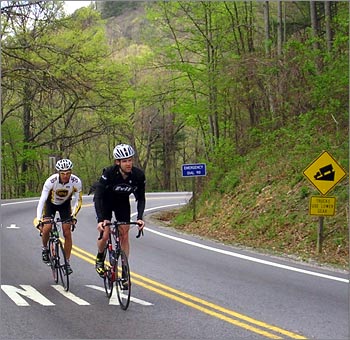 I say orchestrated, because he simply rode behind for the good of the photograph. Vic can kill me, and chances are good he can kill you, too. Dang masters racers. Dig that signage!

After watching the race come by at breakneck speed over the past gap, we were off to Frogtown Cellars (www.frogtownwine.com) for a nice wine dinner which was, without doubt, the most luxurious dinner I have ever experienced on any cycling tour. Period. Seated comfortably by the open doors of a huge open wooden deck we munched specially prepared pasta and drank wine in the palatial mansion nestled among 28 acres of vineyards in the hills we had just climbed.

Discover Adventures knows how to show its guests a good time, and they delivered in spades this night. The wine and food was great, as was the scenery and service. A fitting end to a glorious day in the mountains.

Tomorrow the party could be over, as the monstrous Brasstown Bald climb awaits, with its 25% gradient, at its worst. Perhaps I was allowed to frolic on Death’s holiday, maybe he’ll show up tomorrow. Who knows. It’s once again midnight, and I must shut ‘er on down to bank a little sleep.

Sea Otter: PEZ INSIDE The Car!