If I had the slightest bit of sense in my thick head, I would have stayed here in Helen today, enjoying the Bavarian town and the Corvair convention. Looking at cool cars, sipping drinks on porch bars, and doing some quality people watching would have been a better way to spend my time today.

Dave – the new King of Self-Portraits. Note he’s not smiling.

Instead, I chose to jetison all my intestines, blood, 4 Ѕ gallons of sweat, and any morale I had earned back yesterday out on the today’s climbs of the Hog Pen and Unico gaps in the Northern Georgia Mountains. Though I was present at the base of the granddaddy of them all, Brasstown Bald, I chose instead to save myself further humiliation by waiting out the races arrival, and heading back to the hotel over the Unico Gap. My double, even with a new 27 on the back, would not have carried me even on my best day up the punishing steppes of the 3 mile Brasstown climb, complete with its midsection, which is at some 23%. No. Uh – uh, F%$& that.

Our day began under sunny skies, with furtive glances and mutterings of how many and what size beatings were in store for all of us. As the Discover Adventure group listened to the morning meeting at the Hampton Inn, all was a bit uneasy. It was as though we were an infantry unit, about to go out on what was sure to be a very risky combat patrol. I was one of those who had some bad feelings taking residence in my guts.

We began the climb, after traversing Helen a few times due to being lost, slowly but surely. It was, right off the bat, not going to be as stellar as yesterday. Nope, not a good day at all. The temp shot up quickly and rested at 88 degrees. The wind seemed to be on our noses the whole day, and the damn road just kept going up. Seeing the next three switchbacks on the way up, and no room for recovery along the constant drag upward, is hard to take with dead legs. I found myself alone. I found myself cursing and weaving, and ultimately, I found myself stopping. I was sweating buckets down my nose in a matter of moments, despite eating and being hydrated to the eyeballs. I found solace in locals Kirk and Mark, who offered up an ice cold Grolsch beer, which at the 3.8mph I was manageing sounded like Utopia. I wheeled (or is that wheezed?) over to their encampment, and enjoyed the suds, before setting out once again and perfecting the climbing style of a rank amateur. This was true pain. (See pic above…)

I made my way along the morning torture, and was happened upon by Thaddeus and Mark, the fellas doing the signage on the route for the racers. I only knew they were behind me as I fumbled my bike around like an old codger because I could hear Thaddeus screaming “Eeeeevil! Eeeevil!” I don’t think I said anything as they came along me. I had no expression. I just shot the pic.

As the climb ended, I regrouped with Vicki and Jon for the descent. They always say going down is more fun, and it could never be more true than in this case. Speeds touching 50mph are enough to make the pain go away for a while, simply because all your attention is focused on finding the clean line, not the keg party that lactic acid had just thrown in your legs.

Lance and Jens on Brasstwon Bald.

We slogged up and down some rollers until we made the base of Brasstown, which was looking more and more like Alpe d’Huez by the moment. People were coming in droves, cars parked all the way down the mountain, a drink stand, flags and chairs and people trying to find shade in the intense mountain top heat. Soon the caravan begin popping up, motorcycles, pace cars, officials, medical vehicles, then the helicopter popped over the mountain top. The excitement was visceral as leading Domina Vacanze rider hurtled past us and began his own private hell up Brasstown. Then the Lance group came by and the crowds were going crazy. 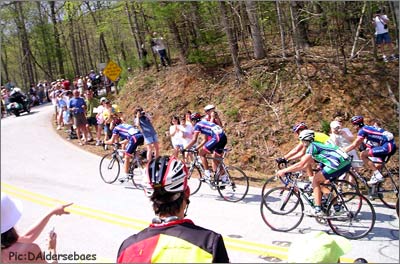 We got out while the getting was good, and headed for home. I am off to eat the hell out of some sloppy greasy burgers. Tomorrow is the last day of this epic voyage, and I can say that while I am sad to say goodbye to some of the great new friends and riders I’ve met, I am looking forward to home, my faithful dog Bogart, and my good old Wisconsin rolling hills. This mountain stuff takes some serious getting used to. 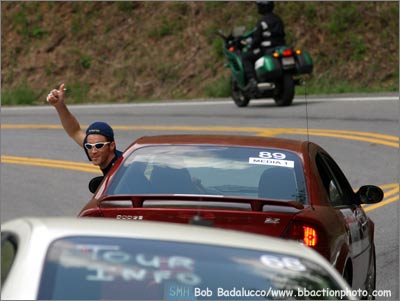 Ted Arnold gives an enthusiastic hiho from the media car yesterday. Today his laptop packed it, resulting in no actual race report. Good news is, Ted is getting a new laptop!.

Thanks for the support out there y’all, it’s nice to be noticed sometimes.