Roadside PEZ: “For many years, I have been coming to Bologna to watch the Giro dell’Emilia. It’s one of the last and finest Classics on the pro calendar and one of the best races you could ever hope to see in Italy.” Ale Federico thinks it is second only to Sanremo and Lombardia, and wonders why it’s not on the ProTour calendar. Let’s take a closer look at one of the most beautiful races of the season. Read on!

The Giro dell’Emilia is frequented by the best Italians and by a large number of international champions. This year, Evans is here, Kolobnev too, as well as Lovkvist, Gesink, Vinokourov, Kirchen, Basso, and many others. Easier to note, there are no sprinters in Bologna – they’re in France for another Fall Classic: Paris-Tours.

This year, Fall has not yet come and it’s still warm; there’s no sun, but it doesn’t rain. The meeting point for all the journalists is on the top of the brutish climb of the San Luca beside the Sanctuary where, every year, the GS Emilia organizes a refreshment area for the media. My wife, Natalia, and I arrive in the early afternoon while the race approaches quickly from the Apennines to Bologna. A large, expectant crowd awaits the race on the San Luca climb. 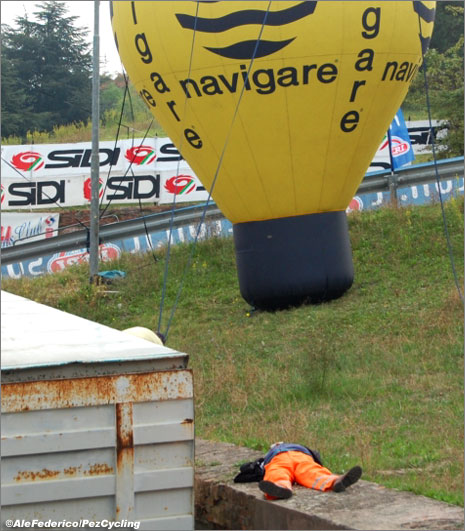 Someone worked so hard to prepare everything that now it’s time for a rest.

The climb is quite steep and just walking up the damn thing is hard. Inside the archway that ascends next to the road, you feel like you are in a never-ending church: it’s mostly dark and silent. The only sounds are the labored breaths of the pilgrims making their way to the top. 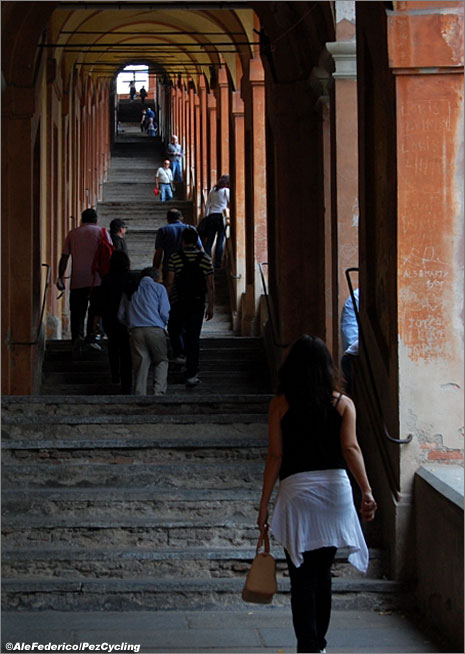 Finally, we arrive to the top, and we get the credentials. Natalia is very happy to wear her creds, despite the fact that she’s constantly approached by passersby who assume she knows something about the race and ask her for updates. There’s just something special about those first official credentials at a bike race… 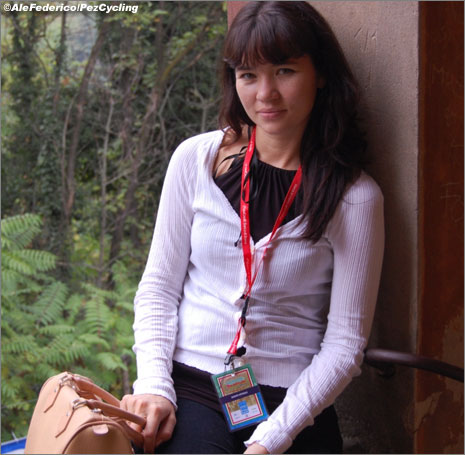 She’s completely uninterested in cycling, but she does know that Alexandre Vinokourov is riding again after a long, er, pause. She originally hails from Uzbekistan, and since there are no Uzbek riders here, she feels it is important to at least support her neighboring Kazakh. Credentials in hand, we retrace our previous steps back down the climb. We stop just after the Orfanelle, the hardest part of the final climb.

There are many people clustered along this section. The official speaker continually keeps the fans updated on the race news. At long last, he cries ecstatically: “Riders in Bologna!” That’s the sign for everyone to draw even closer in these last moments before the race storms by. The helicopter moves over our heads, at long last, drawing concentric circles smaller and smaller. 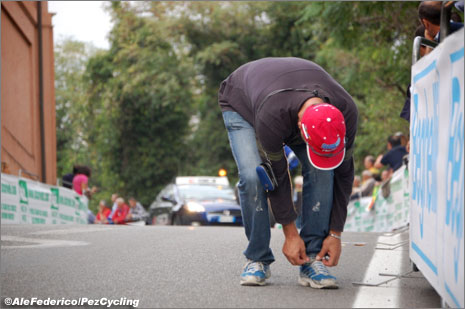 Even with the race baring down, there’s always an extra second or two to tie your shoelaces, right? 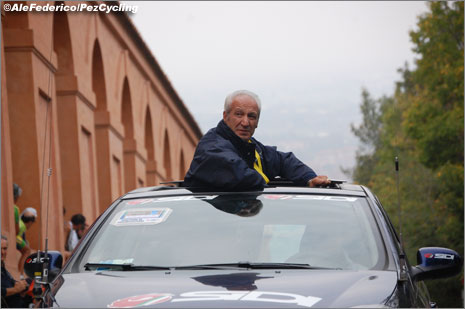 The organizer of the Giro dell’Emilia, Mr. Amici, enjoys his spot at the head of the race.

The continual race updates announce the scene right before it unfolds before our eyes: there’s a break still off the front, but it’s advantage is falling rapidly under the impetus of Lampre and Liquigas for Cunego and Basso. The two teams are united in their goal of setting up their respective leaders. 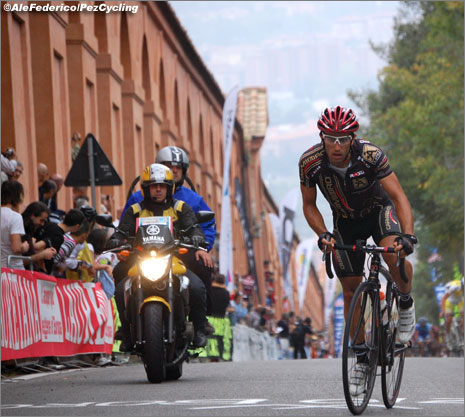 The first time up the San Luca, it’s Ratti solo out of the break… 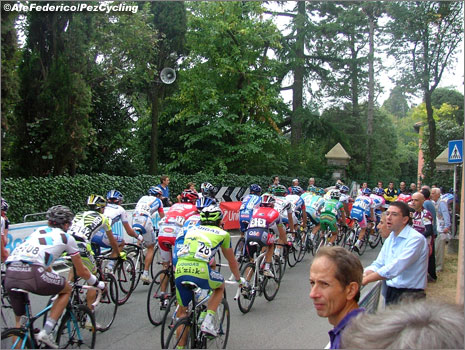 …But the bunch is only a few hundreds meters behind him, chasing hard.

The final circuit (the race climbs the San Luca five times) is very fast. It is just ten kilometres long and the leaders take less than fifteen minutes to cover it. To put it succinctly: while the stragglers are concluding the climb the leaders are approaching it. For the people on the side of the road, this makes for a wonderful show.

During the second passage I fall in love. Lovkvist is leading the group. He would fly if he had wings. He looks so strong that I choose him as “my” man for the win. 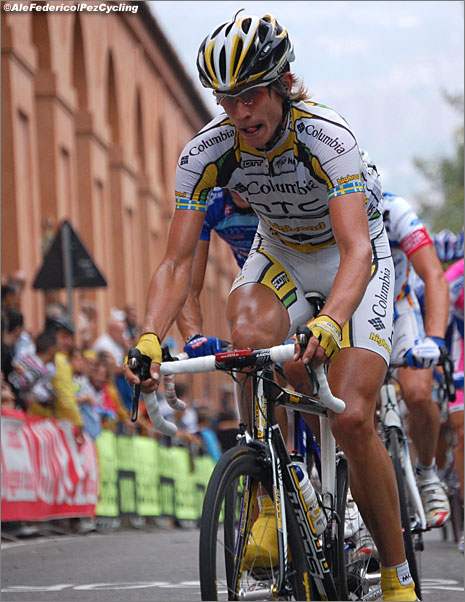 Lovkvist was Ale’s pick after he flew by, dripping with class and infinite possibility.

Before the third passage I move little bit closer to the finish. Natalia should follow me, but she’s very busy scanning the rapidly passing colors of the bunch, trying to steal a glimpse of “her” man, Alexandre Vinokourow. 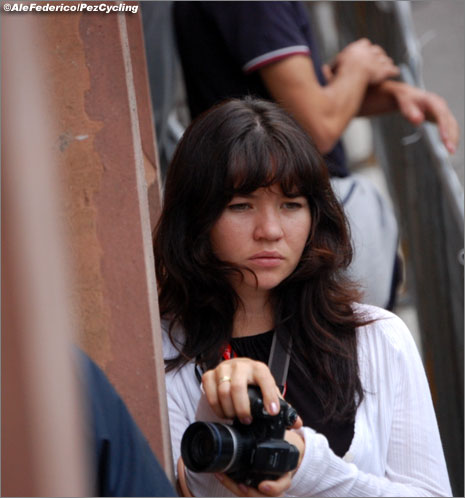 Natalia only had eyes for one bike racer on Saturday: Vinokourov. 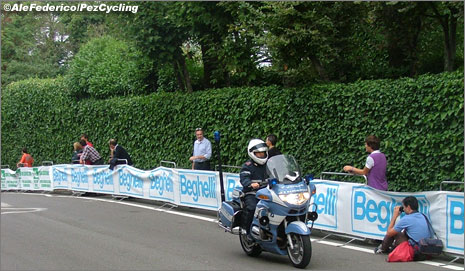 The left gutter is a safe place to be, right?

For the third ascent, I sit on the left margin of the road, right on the edge between two barriers. I thought it was a safe position to watch Gesink and Lovkvist pushing forward with their attack, but it ended up being a little bit dangerous when Lloyd decide to drive the chasing group up the left gutter: right at me! In that scary moment I could feel the breathing of the major riders of the world. I was scared to look at them. I almost shut my eyes in silent prayer, hoping that they were fresh and coherent enough to have their eyes open, so they wouldn’t collide with my crouched figure. I knew it before, but this time I felt it through my whole body: it’s a hard climb, but it barely seems to slow them down. 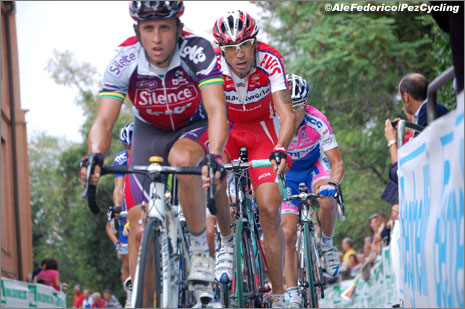 Matthew Lloyd drives the chasing group for Cadel Evans on the third ascent of the San Luca. 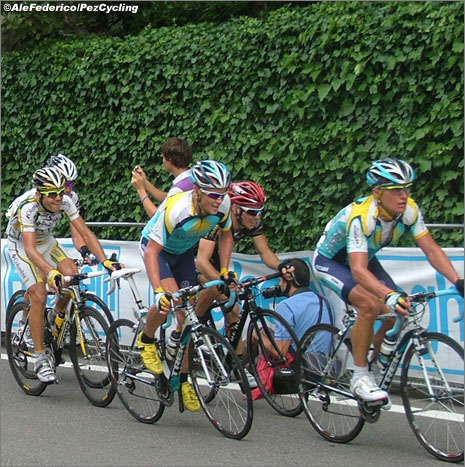 For the penultimate climb up to the Sanctuary, Ale opted for a less dangerous perch.

To watch the fourth passage I find a less exciting place. Lovkvist, Gesink, Fuglsang are still together ahead, but this time they are joined by…Vinokurov. It’s Natalia’s moment. I leave her to bask in the happy moment. She can’t come with me to the finish line, so I move quickly to get in position for the finale. As usual the finish line is crowded with photographers, masseurs, and journalists. The speaker keeps his machine gun commentary on full blast, and we know that the leading group of four will hit the climb together for one last battle. These minutes are eternal. 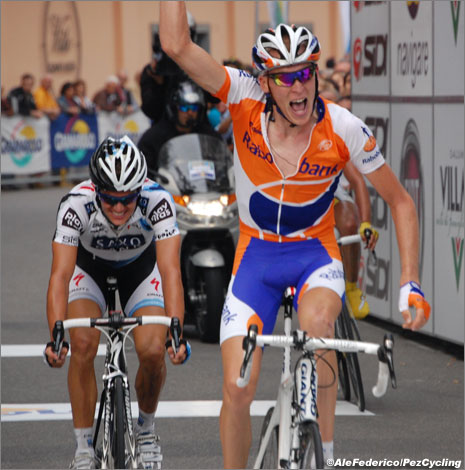 Gesink was a triumphant victor atop the wild inclines of the San Luca.

Everyone is nervous at the finish line, constantly moving, searching for the best place to watch or snap that perfect picture. “It’s a sprint!” – the speaker announces. The cameras are now shooting faster and faster. Some of those shots will find their place atop the Italian newspapers tomorrow. At long last, after waiting for what seemed to be far too long, it’s Gesink, the young Dutchman, winning the Giro dell’Emilia. To find the first Italian you’ve to scan down the results page: all the way to tenth position.

The tifosi are quite disappointed. What happened to Cunego and Basso? Cadel Evans was first out of the chasers – he took fourth. Maybe he left his final attack a little too late? Fifth went to a determined and gritty Vinokourov. He didn’t win, nor did he manage to hold on to last out of the break. He lost 4th in the final hundred meters to the recently crowned World Champion, but, at least for Natalia, today was further proof that Vino is back. 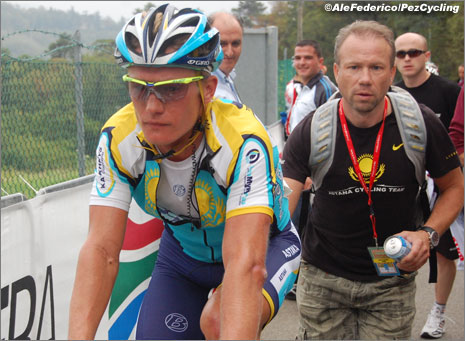 The evening comes fast on Bologna this time of year. The race disperses in the many different directions out of Bologna. Tomorrow there will be another race nearby, the GP Beghelli. The race season is stretching its back for one last big effort next weekend. There’s only a little bit of space remaining in the 2009 history books for glory.

The run to the Giro di Lombardia has started. Evans showed himself ably with a rocket-esque pace up the last climb and will certainly be looked upon as a favorite next weekend…along with his teammate and Paris-Tours winner, Philippe Gilbert.

Everyone is looking forward to next Saturday in Como to see whether the rainbow jersey can win again just a few miles down the road from his biggest success in Mendrisio. The people descending back down to Bologna discuss how far back the Italians were today: much too far behind they groan. They speculate on the chances of an Italian win next weekend. They won’t be satiated after Lombardia though, there’s a whole winter to speculate about 2010, a whole winter to ready for Sanremo.