White road sector 5. The race has passed and I’m back to the car on the top of Monte Sante Marie. All team cars are rolling out and we are waiting the ‘FINE CORSA’ van that officially closes the race. The team cars with the special blue decals are parked near me and also keeping advantage to get in that queue. 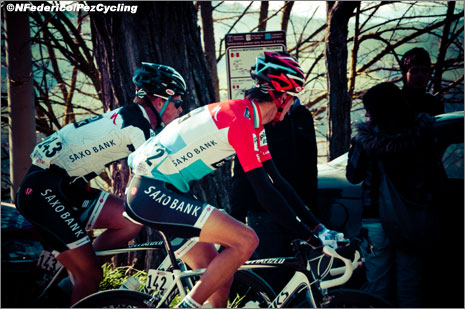 When I get back to my car my first question to my wife Natalia and to my daughter Diana is: “did you take good pics?” – I know this is getting my wife nervous but it’s stronger than me. We jump in the car and we are almost ready to go, when I see the Luxembourg Champion jersey coming slowly with a teammate. I get out calling for the camera to Diana who’s already checking my pics. I have the time to shoot one picture of Andy when he’s got distracted by the back view of a supporter totally ignoring him. I’m quite upset! 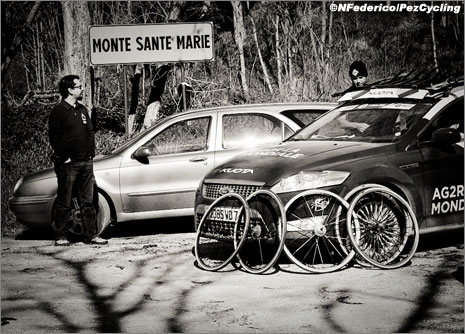 I jump back in the car and the FINE CORSA passes immediately after. There’s no way to join the queue without being little bit aggressive: nobody there wants to lose a position. Seconds are eternal in that moment and you have to wear a bad face and bluff little bit with intention – “my car or your car” – be sure the bluff doesn’t become real! 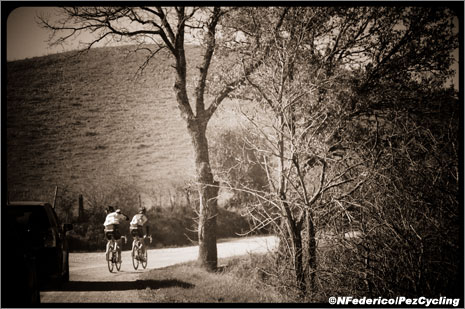 Natalia is totally against this stuff. She does the same for her dress sales, but this of bike races is something she will never understand. My luck is that today her moon turns on the right side and everything flows smooth. I’m in the queue!

At that time my only thought is to get in time to the finish line. I’m fourth or fifth after the FINE CORSA van and I’ve studied already the shortcut. I’m in good position. Natalia and Diana already lay in their seats and they look for a catnap. 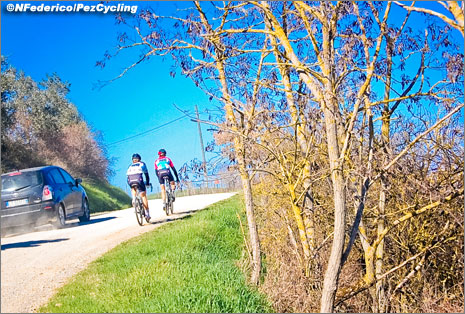 Suddenly, after a bend well ahead I see again the two Saxo riders pedaling slowly. They are behind the FINE CORSA van, which means they’ve withdrawn! They still have the race number (it’s supposed to taken off) but they’re out. I’m sure. I can’t see the FINE CORSA because the following cars are decelerating to get these riders in front of them. 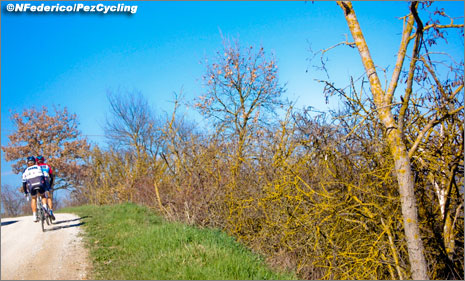 I again cry to Natalia and Diana – “There’s Schleeeeeck!”. Diana thinks I’m talking about “Shrek” and wakes up immediately. Natalia has some delay but then tries to realize what is going to happen. When they both understand that I’m talking about a boring rider it’s too late, they’ve already the cameras in their hands ready for use.

I try every method to involve them in the matter. I’m in their hands because I’ve to drive – “He’s one of the most important riders in the world!” – “You’ve in front the future of the cycling” – “That’s an unique moment we can live. Don’t fail, don’t fail these shots” –

I probably exaggerate a little bit because now the panic grows in the car. Diana continuously asks if his name is really Shrek and Natalia is quarreling with my camera which is still equipped with zoom and she doesn’t know how to use it. 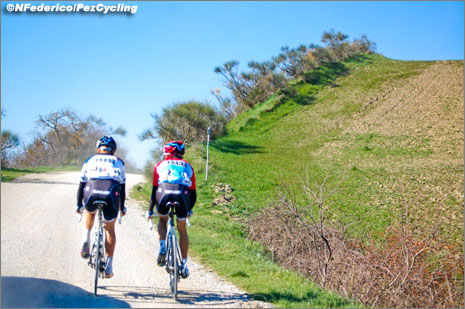 I’m very busy with the gravel road and the car behind pushing me to accelerate, so I do with cars in front of me. Schleck becomes nervous with the car in front of me because they delay little bit with their camera.

My last recommendation – “one shot of his face, don’t fail, don’t fail” – Natalia is completely in panic with camera, she did a great job when the riders were far but now we are too close and the zoom is working against. 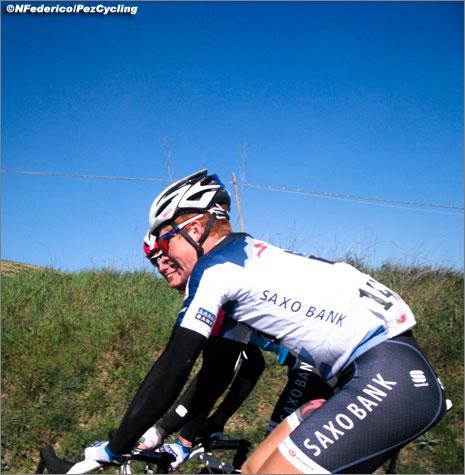 Diana is my last chance but she’s distracted by too many things. “But why he pedals so slowly?”
– “Diana, he’s out of the race! Take this shot, don’t fail” –
“But if he takes the shortcut and come first to the finish?”
– “Diana, my love, he’s out.” –
“Yes dad, but if he wants deceive all the others…” 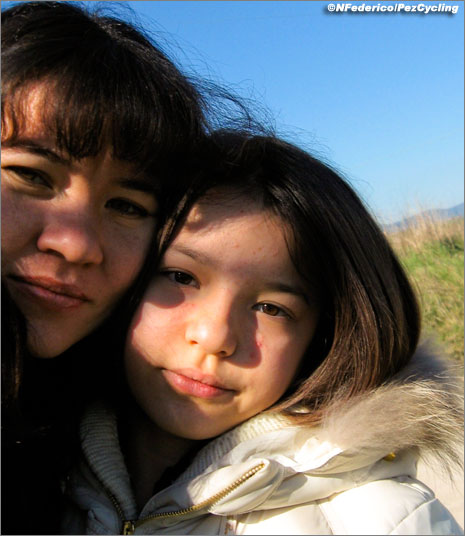 Diana does her best, which is not bad for an 11 year old photographer. It’s true, Schleck is completely covered by the teammate, the German Klemme, but we have got his smile. And, believe me, this smile was totally to Diana, a young reporter, at her first dirty job.