“Ro-dan-i-a, Ro-dan-i-a…” So sings the loudhailer announcing the approach of the race. And we only have moments to wait before the whole mad procession passes by in a cloud of noise and dust, car horns and shouts of encouragement from the fans lining the side of the cobbles.

We kicked the morning off with an easy start by strolling down to the VIP area where the team buses would park and the riders would get set-up. Pete from Velo Classic Tours has friends everywhere here in Europe and had wangled us guest passes into this cordoned off square in the heart of Bruges. There weren’t many buses when we got there but our timing was perfect as the bigger teams began to roll in.

Movistar pulled up alongside MTN-Qhubeka but the big buzz was when the Sky bus nosed into the square flanked by its Jaguar team vehicles. We were keen to see the new rear suspension on the Sky Pinarellos and somehow ended up on the wrong side of the barrier meant to keep everyone back…maybe it was the right side because the team mechanics didn’t seem bothered that we were there and we got a good look at the new kit. 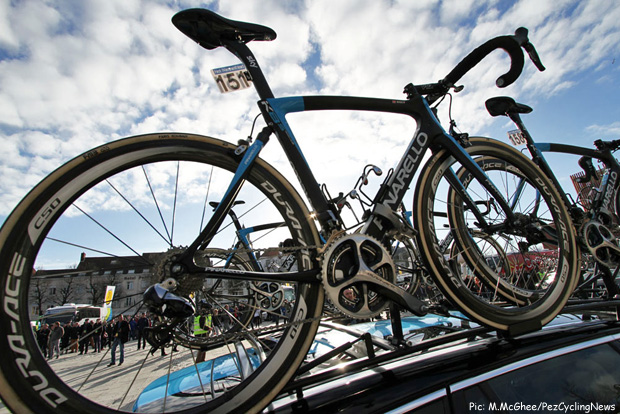 Moving around the now busy square we noticed FDJ boss Marc Madiot standing passing the time in a very relaxed way…he would maybe not be so relaxed by the end of the day to have one of his team vehicles as good as written off when it was rear-ended by Shimano neutral service in a collision. The Shimano car also took out Jesse Sergent of Trek Factory Racing in another incident and then to cap off a bad day for Shimano another vehicle took out a fit looking Sylain Chavanel of IAM Cycling… 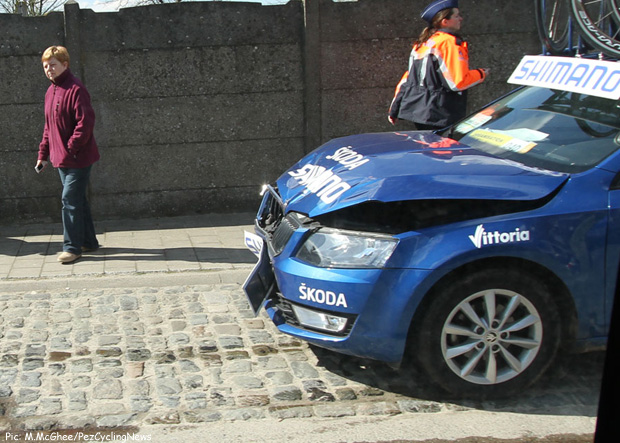 The riders were heading down to the main square to sign on and then coming back for last minute preparations so it was time for us to make our way back to the street outside our accommodation, the rather beautiful Hotel Tuilerieen where the race would pass right by the front door. However, we couldn’t leave without saying hello to Eric de Clercq, another old friend of Pete’s and he was very gracious, letting us take pictures and joking around. 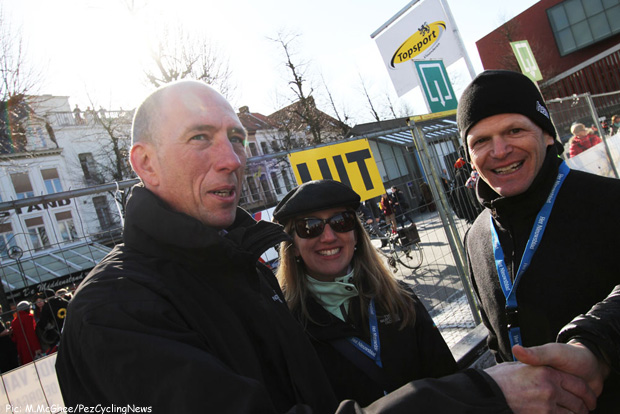 Eriq with Lisa and Peter from VeloClassic

As we hustled down a side street on our way back I literally bumped into Jens Voigt as he rushed in the opposite direction. I’d interviewed him a few weeks ago back in Edinburgh but it’s a hard life being a popular man and from the look in his eyes it was obvious he couldn’t remember who I was. Better luck next time!

Back at the hotel, the Police outriders were firing up their motorbikes and they peeled out one by one as the team and television vehicles came down the street. And there they were as the riders rolled across the bridge and down the street right in front of us. They were taking no chances and most were wearing extra layers to keep the chill at bay; Luca Paolini looked as if he was wearing a couple of extra jackets just in case. 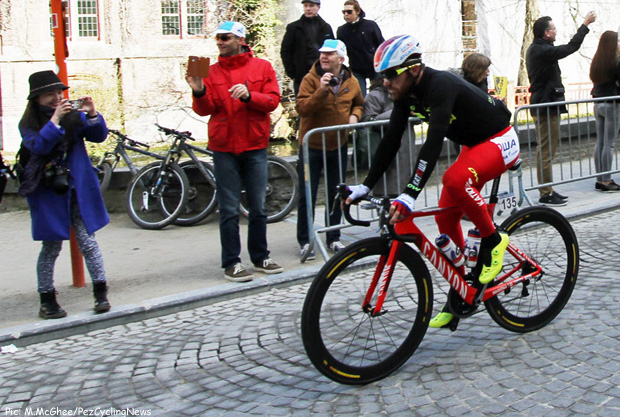 And we were off! Pete had parked our team bus down the street so we could get a fast exit and all we had to do was squeeze past all the people struggling to move along the narrow sidewalks. But we made our way in short order and were soon heading out of town. The VeloClassic Tours guys had made a banner supporting New Yorker Megan Guarnier who rides for the Boels Dolman team and in no time we’d secured it in a place where she couldn’t miss it. “Ro-dan-i-a” sang the loud hailer and the women’s pack hove into view, skipping lightly across the cobbles. Lizzie Armistead, Megan’s teammate, was off the back having suffered an early flat but she was making light work of getting back on.

We dived back into the van and shot along to another sector on the other side of the fields and caught the women coming through again, Armistead safely back in the field. 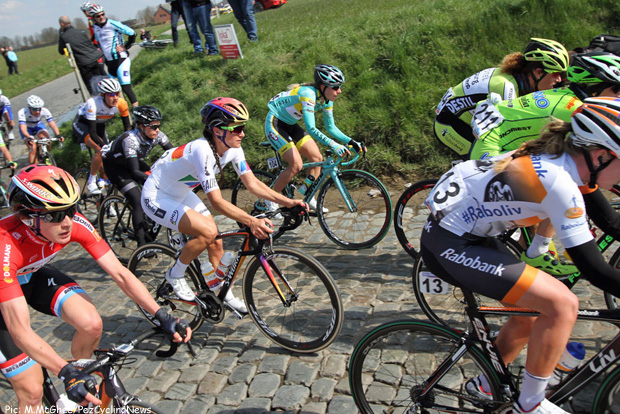 Now it was onto the men’s race and Pete took the back tracks and brought us right to the top of the Eikenberg. The crowd was growing all the time and the lone Policeman was having a difficult job strolling up and down trying to keep everyone to the side. We could follow the race progress by watching the helicopter and as it got closer, the crowd surged forward, craning their necks to look down the cobbled climb. 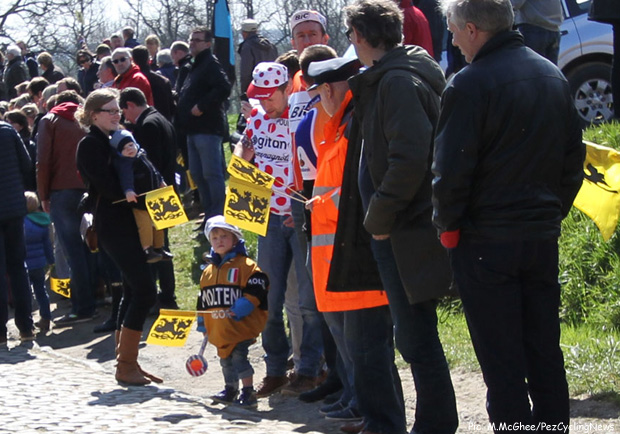 And suddenly the riders were on us as they fired up the hill making it look all too easy. There was a group off the front with the main body coming up shortly afterwards, the riders spreading across the track as some sought out the easier gutters, forcing the crowd to step back. Cars and cyclists at phenomenal speed, passing inches from stationary people would not seem like a great combination but somehow it all went off smoothly. Maybe because they’ve been putting this race on for years and know what they’re doing. 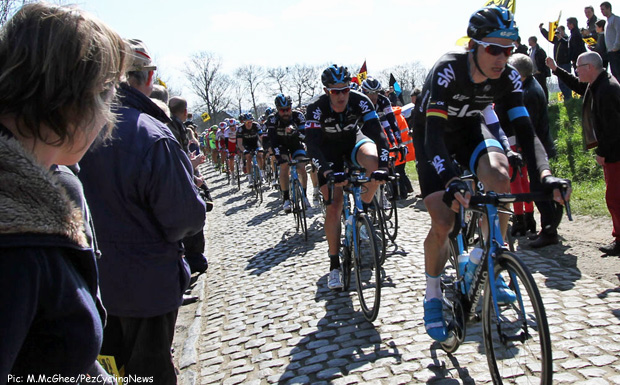 And now the mad scramble to get away from the Eikenberg and on to the next section but again Pete’s superior knowledge and experience saw us turning down one small track after another and all a sudden we had found an unguarded way through to the Haaghoek section of cobbles. We found a nice spot on the downhill and we marveled at how the sector looked great under the warm sunshine; the last we’d seen of it was yesterday in the rain and mud as we tackled the sportif in horrendous conditions. 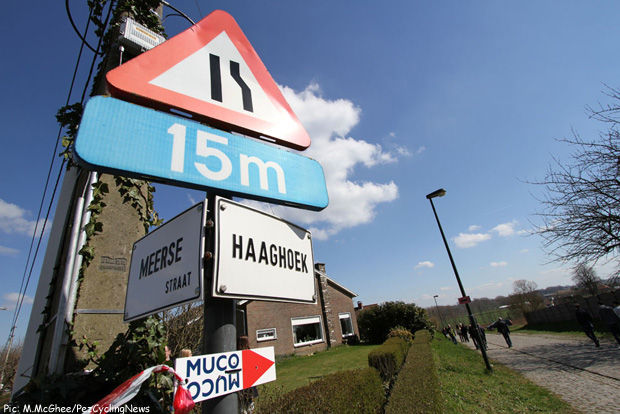 Again, the riders made it look easy. The break was still away and with all the serious stuff still to come, none of the big players were showing their hands just yet. Peter Sagan of Tinkoff Saxo, a man who’s due a big win, was looking quietly confident in the middle of the pack. 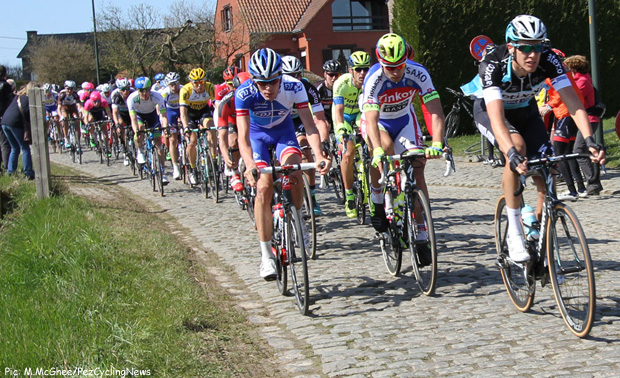 We just had time for one last viewing spot and we headed over to the Kaperij in time to see the lead group come through with a gap of 2.30 over the main peloton. The top contenders were all still keeping a wary eye on each other with nobody ready yet to make the move. 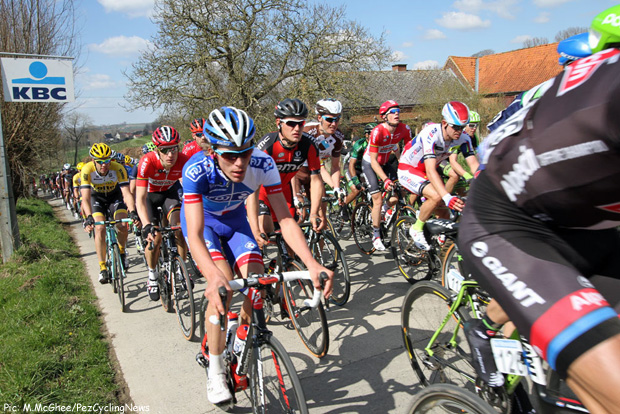 Just as quickly as they had come, the race had passed by and was gone. Well, not quite as we were waiting for the flag vehicle that marks the end of the race convoy to pass us. While we were waiting a couple of ambulances shot by and we didn’t know at this stage that the Shimano Neutral Service vehicle had crashed, causing the injury to Jesse Sergent. Eventually we got on our way, passing the stricken service car just down the road.

We ended the day having a great lunch at the Petit Couchon, watching the final stages of the race on a big television set up for just that purpose. Eating gourmet food, drinking great Belgian beer and watching the Tour of Flanders: what better way to spend a beautiful Easter Sunday?

The only fly in the ointment was that we had to clean all the mud from the day before off our bikes when we got back to the hotel. We’re riding the Gent-Wevelgem course tomorrow!

Thanks to Peter and Lisa Easton at VeloClassic Tours for showing Mark the best way to see the Classics. Check them out for yourself at veloclassic.com
Like PEZ? Why not subscribe to our weekly newsletter to receive updates and reminders on what's cool in road cycling?

Week-end of wins and podiums for RusVelo