Our man Mark was introduced to the cobbles of Flanders last week by Velo Classic Tours, riding the roads of Wevelgem, Scheldeprijs and De Ronde. To finish him off he tackled the Hell of the North and those murderous tracks to Roubaix, but he still had time for rider watching at the sign-on in Compiégne.

It’s Monday morning and I’m sitting in a cute café in the heart of Gent, reflecting on the craziness of the last few days, and how our cycling superstars are put squarely in the frame and then, almost as easily, forgotten about until the next race.

I’ve just literally bumped into Tyler Farrar coming out of another coffee shop, this time a well-disguised Starbucks (you can take the American out of America…), and nobody but me knew who he was. We shared a knowing smile and he knew he’d been recognized, possibly because he’s seen me sticking a camera lens in his face several times over the last week, but he’s off-duty now and so we both left it at that. And this is the essence of the sport that we call our own. Our heroes are treated to mass adulation by an audience that can literally get close enough to tug their sleeves and ask for autographs and photo opportunities. There are no security men or personal bodyguards (now that the bogeyman of cycling is gone) and the riders literally run the gauntlet whether it’s to sign on or during the race itself. Stand in the wrong place and they have to walk around you to get by. But we wouldn’t have it any other way and it’s this ‘approachability’ that makes cycle racing so unique. 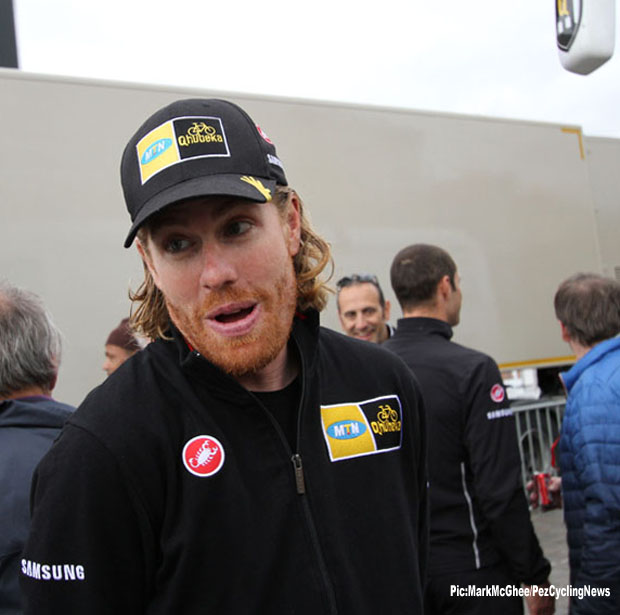 Up close and personal with Tyler Farrar

Time to catch up. Yesterday saw another fantastic running of the spectacle that is Paris-Roubaix and we were out on course to catch a real Belgian flavor of the action. Before that however, we’d been down to Compiégne to catch the sign-on and it was a strange mix of some riders walking about almost incognito and others being treated to a media scrum worthy of the biggest rockstars. The team buses come in behind the stage and the riders are forced to walk along a narrow channel flanked by adoring fans and autograph hunters. Some are hardly recognized while others can hardly move. And among all of this, faces float by you only glimpse in cycling magazines through the years. 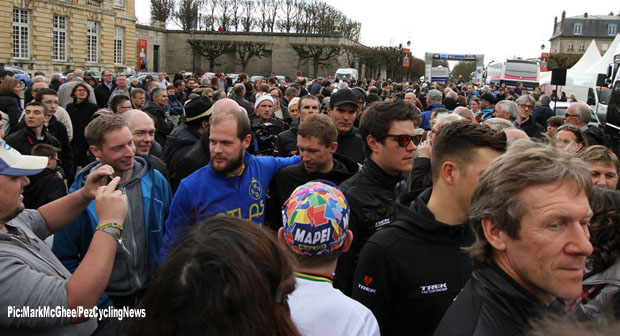 Trek Factory negotiate their way to the stage 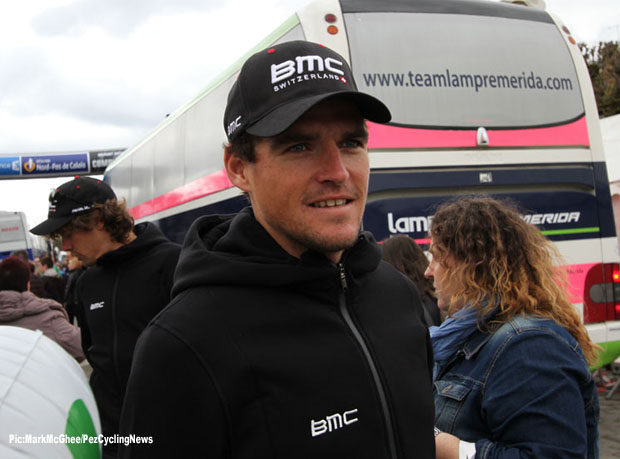 Trying to remain incognito, we spy out Greg Van Avermaet as he quietly makes his way through the crowd, but who could miss that gap-toothed smile? Sylvain Chavanel also cuts his way through the spectators but he finds it more difficult remaining anonymous due to his status as the French housewives’ favorite. I find myself standing next to a hero of my generation, Dag Otto Lauritzen, who is waiting to interview man of the moment Alexander Kristoff. I also get my now usual shot of Scott Mitchell, the man behind the ‘Brit-pop’ image of Sir Bradley Wiggins. 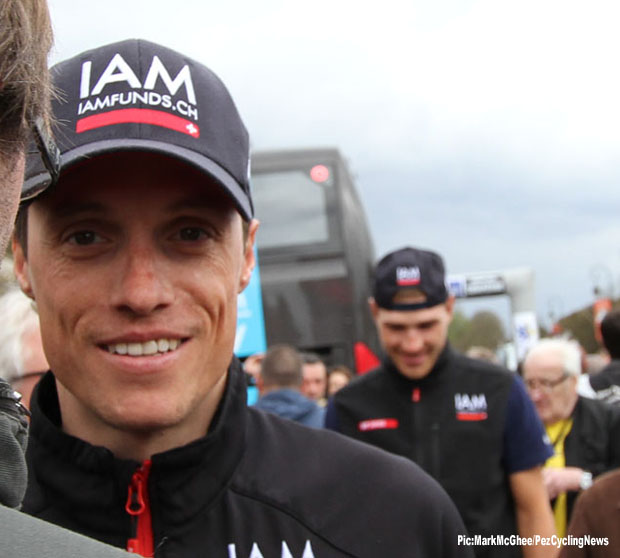 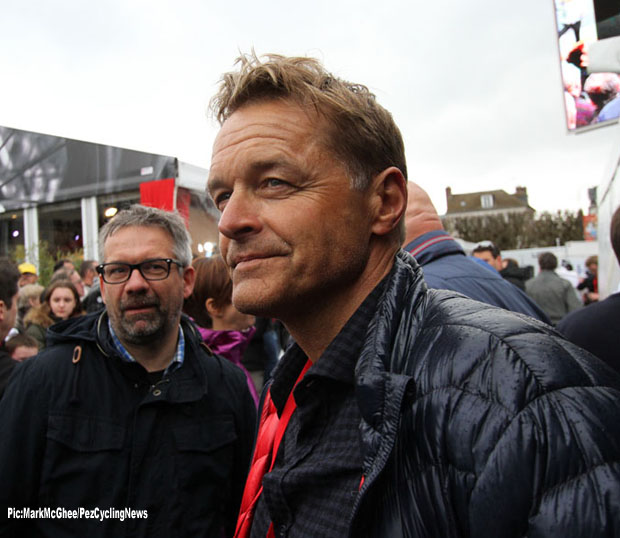 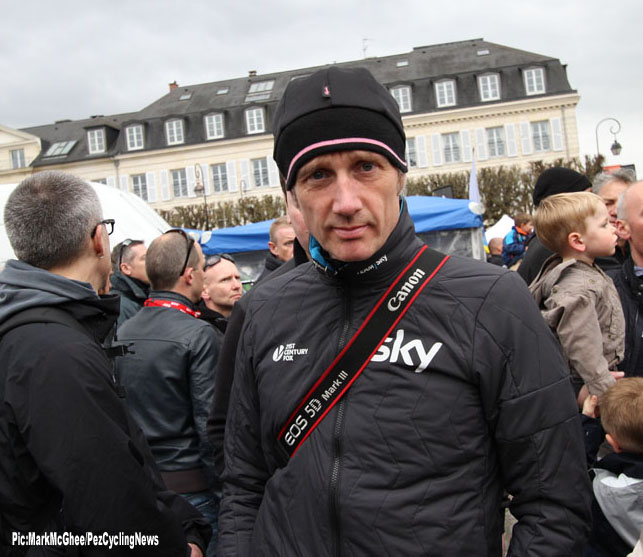 The man behind Sir Brad’s image

And then it’s time for Wiggins himself and he can hardly move through the pack of photographers, let alone the signature hunters. As he’s ushered onto stage, and asked about his famous sideburns of all things, he remains cool and collected despite what must be an irritating experience. 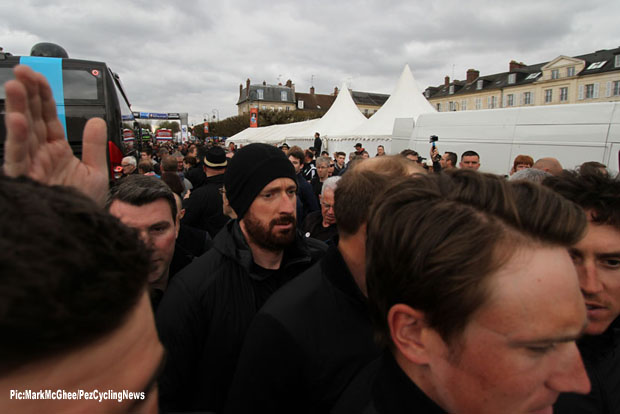 Bradley Wiggins making for the stage 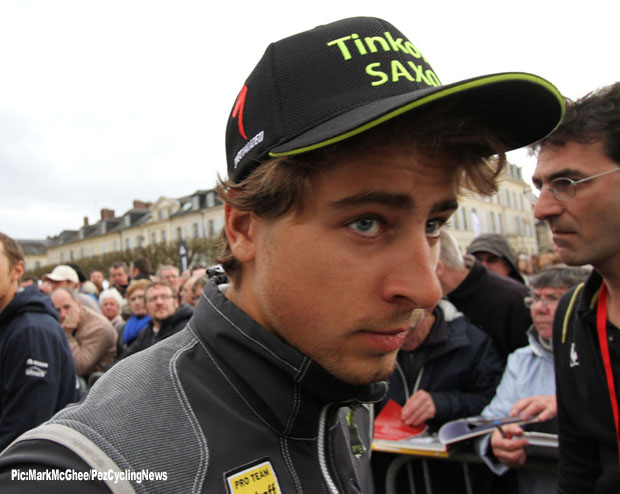 Peter Sagan looking relaxed ahead of the main event

And then it’s time for the L ‘Enfant Terrible himself as Peter Sagan strolls into the Press area before being introduced to the crowd. He’s very relaxed and takes the time to be photographed with kids from a local club. As Alexander Kristoff and Luca Paolini come through we decide to head back to Tournai for a well-earned rest and to prepare ourselves for the morning to come. 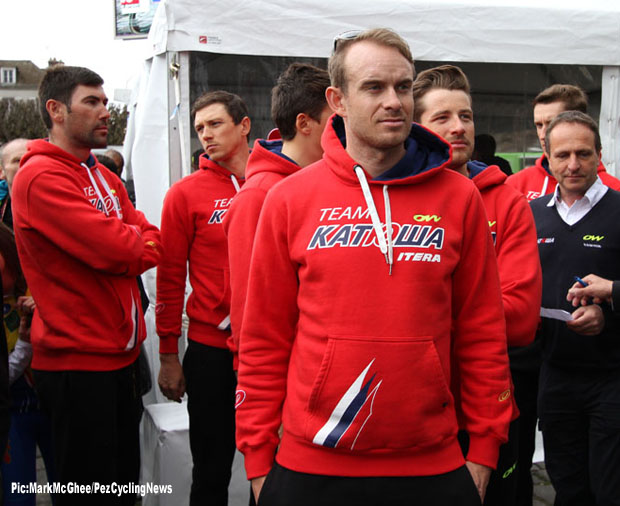 Alexander Kristoff preparing himself for what’s to come 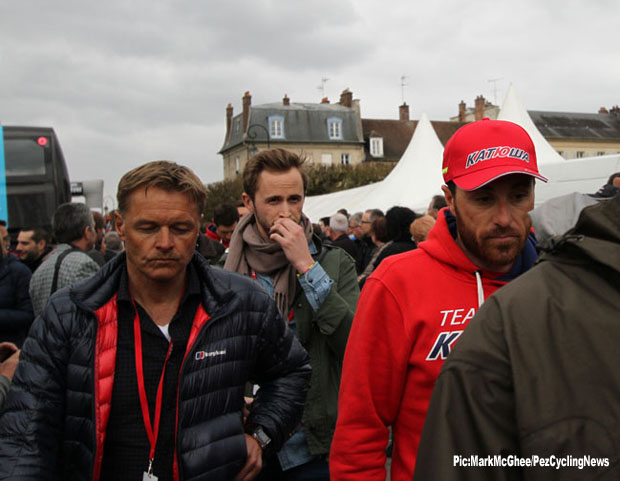 Luca Paolini flying below the radar

We’d already been out that morning on what was meant to be a recovery ride but had turned into a 40-mile head butting against a strong and blustery wind. We’d started in the rain and the day took in the Kluisberg and the Knokteberg before turning for the long slog back to Tournai.

We really felt for all the sportif riders tackling the Paris-Roubaix Challenge in what could only be described as very trying conditions. We were feeling very smug because we’d chosen to ride the route the day before in what turned out to 75° heat, with the sunburn to prove it. I’d described previously just how hard the Flanders cobbles are but they really bare no relation to the cobbles of l’enfer du nord. They are just more brutal, last for much longer (4km at some stretches) and just come thicker and faster as the route progresses. And you’d swear that the pave are actually physically harder bits of stone, especially when you come on to them from smooth tarmac. You start at the Arenberg Forest and it just gets harder from there on in. 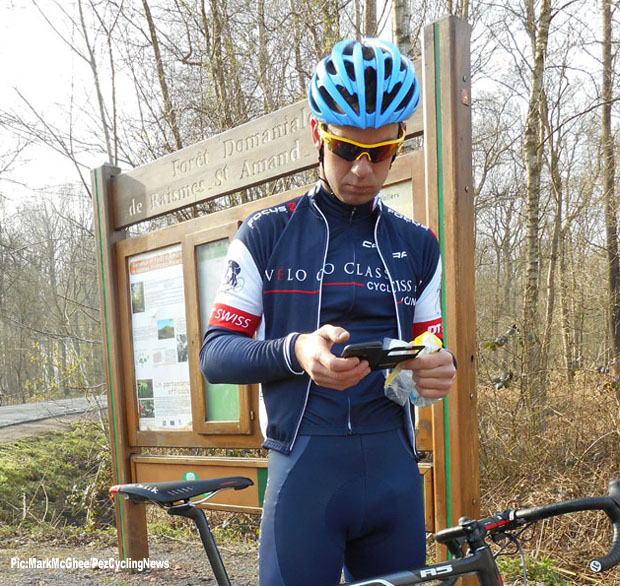 2008 4th place finisher Martijn Maaskant takes it in his stride

Halfway in and you become aware that your hands are blistering and your back muscles are going into spasm and by the time you come out of the Carrefour you’re just about ready to give up. But then you’re through the stretch at Hem and it’s a run through the traffic into Roubaix. All of a sudden, you take a right turn and you’re running down the access road to the stadium and another right takes you into the velodrome itself. The Sportif people were setting up for the next day but Pete from Velo Classic Tours, pushed past and took a circuit of the track before the security people jumped in to stop him. 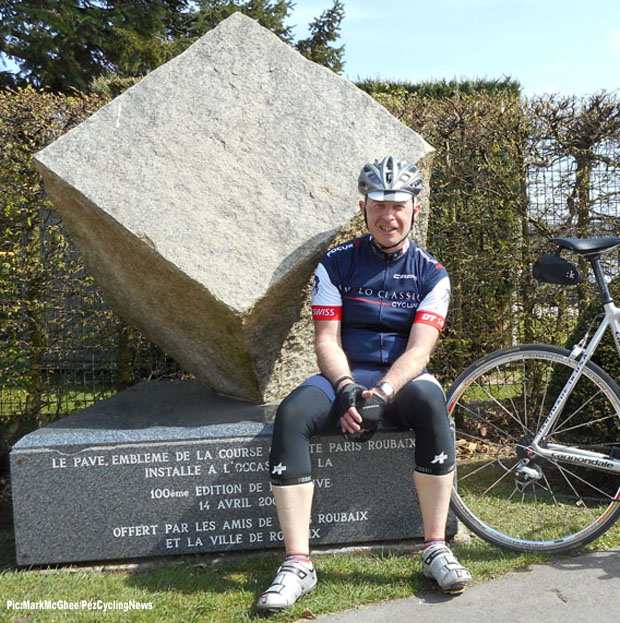 We then set up for a well-deserved lunch and took a trip to see the famous showers of the old stadium. Not ones to be put off by officialdom we found the water key and took the traditional post-ride shower in possibly the grungiest but most famous showers in the world. 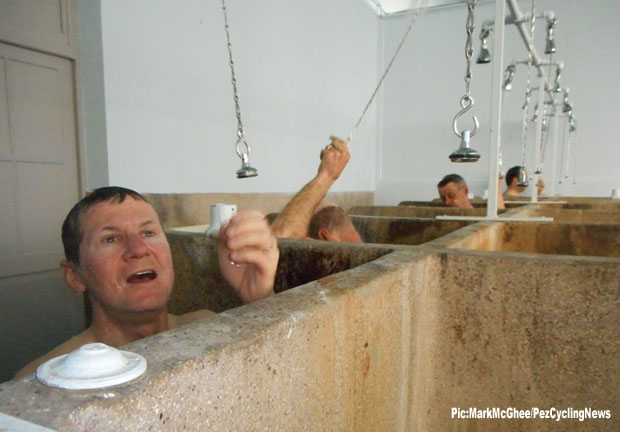 Then it was a quick trip to the shop before heading back to our hotel in readiness for our ‘recovery’ ride. The fact that we’d just completed the cobbled sections of the Queen of the Classics, not to mention Flanders and Gent-Wevelgem over the last few days, was only just beginning to sink in and it made the pain of blisters, sore backs, broken saddles and mind-numbing muscle poundings fade into the background. So now it was just the race-chase of the main event itself to go. 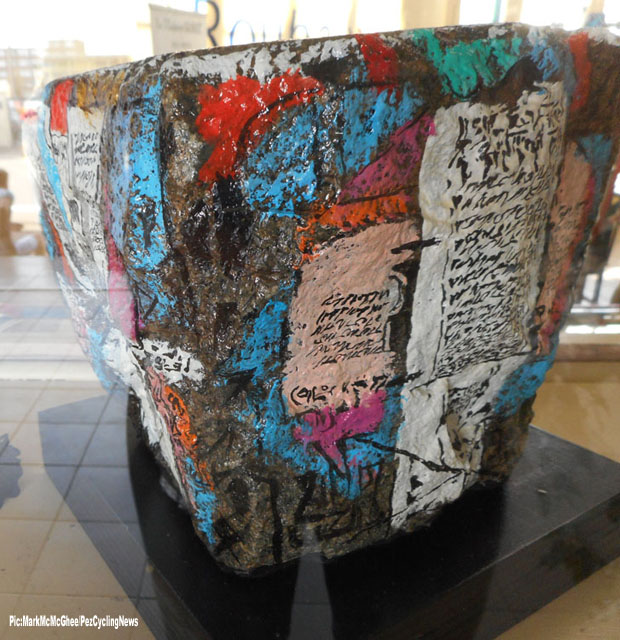 A famous cobble of Paris-Roubaix

My coffee is finished but I have a long wait in London before my connecting flight to Glasgow so it won’t be long before this 12-day epic is done and dusted, described and filed in my ‘life events’ file.

Stay tuned to PEZ for the final installment!

Thanks to Peter and Lisa Easton at VeloClassic Tours for looking after Mark and giving him such a great time on the cobbles. Check them out for yourself at veloclassic.com
Like PEZ? Why not subscribe to our weekly newsletter to receive updates and reminders on what's cool in road cycling?