Roadside PEZ: A Day With BMC

Roadside PEZ: It’s December and it’s Denia in Spain so it must be the BMC team’s media day. Our man on the Spanish coast, Alastair Hamilton, was as usual ready for a morning drive in a team car, an afternoon interviewing some of the World’s top riders and of course a very, very nice lunch prepared by the BMC chefs.

As soon as I arrived at the Denia Marriott La Sella Golf Resort & Spa hotel, Georges Lüchinger the chief communications officer for the team was there to make sure I knew the itinerary for the day and point me towards the tea and coffee. First up was the 2016 team photo; watching Georges and photographer Tim De Waele trying to get the lads to be in the right place with the right clothing and glasses did remind me of herding cats. In the end the job was done and you’ll see the finished product in January. 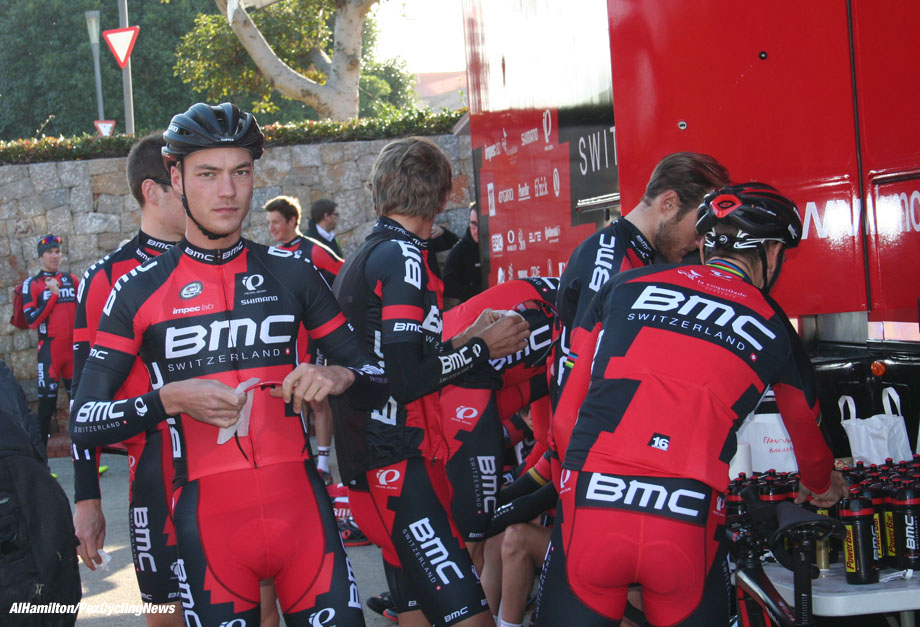 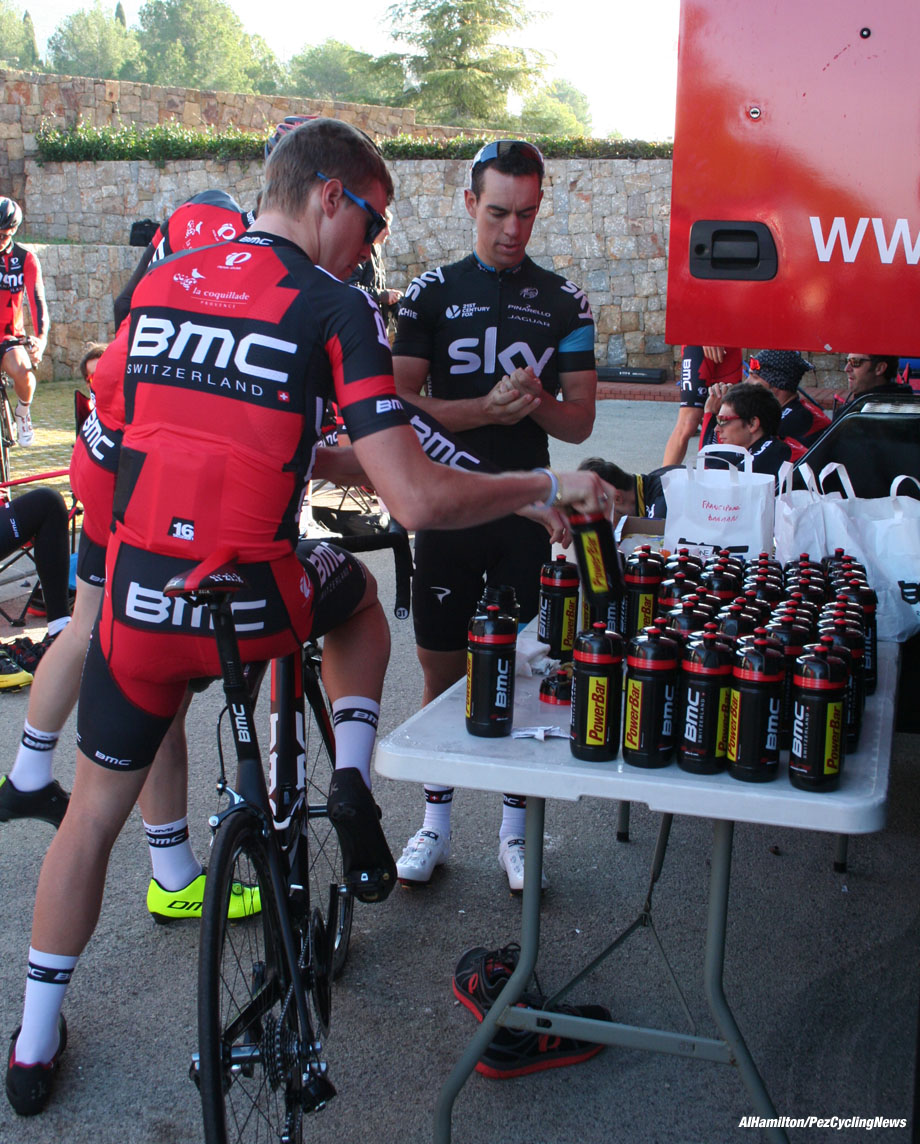 The Australians choose their drinks

Down at the mechanics’ trucks and bus, the riders were getting themselves ready for the ride and the large team contingent would be split into groups of around eight. I would be with the self named ‘Latino Group’ consisting of: Beijing Olympic champion Samuel Sanchez, Manuel Quinziato, Darwin Atapuma, Daniel Oss, Alessandro De Marchi, Manuel Senni, Damiano Caruso and Taylor Phinney. DS Max Sciandri would be driving and Perry Moerman was the mechanic who would keep me entertained in the back seat. 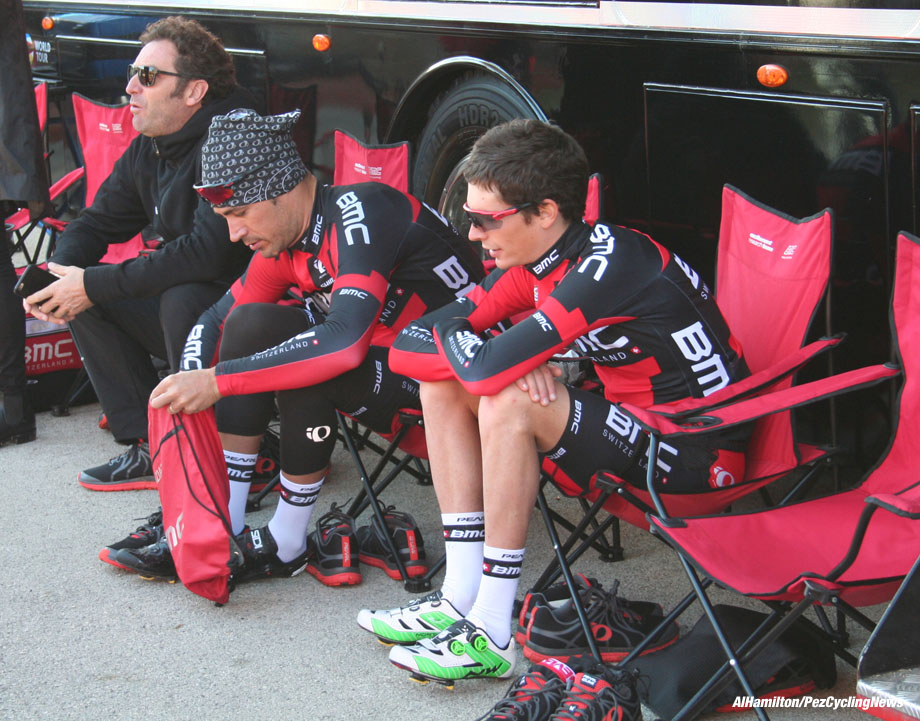 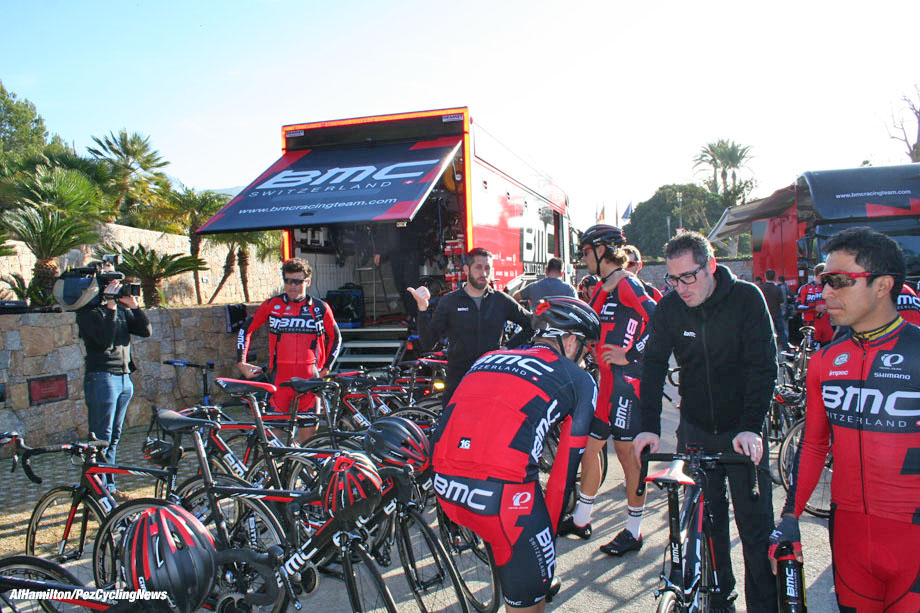 As the riders were still finding their bikes I noticed Atapuma had two SRM power meters on his handlebars. I joked that he had too much power, but I got an explanation about the problem he had been having with his meter, so forget the jokes. 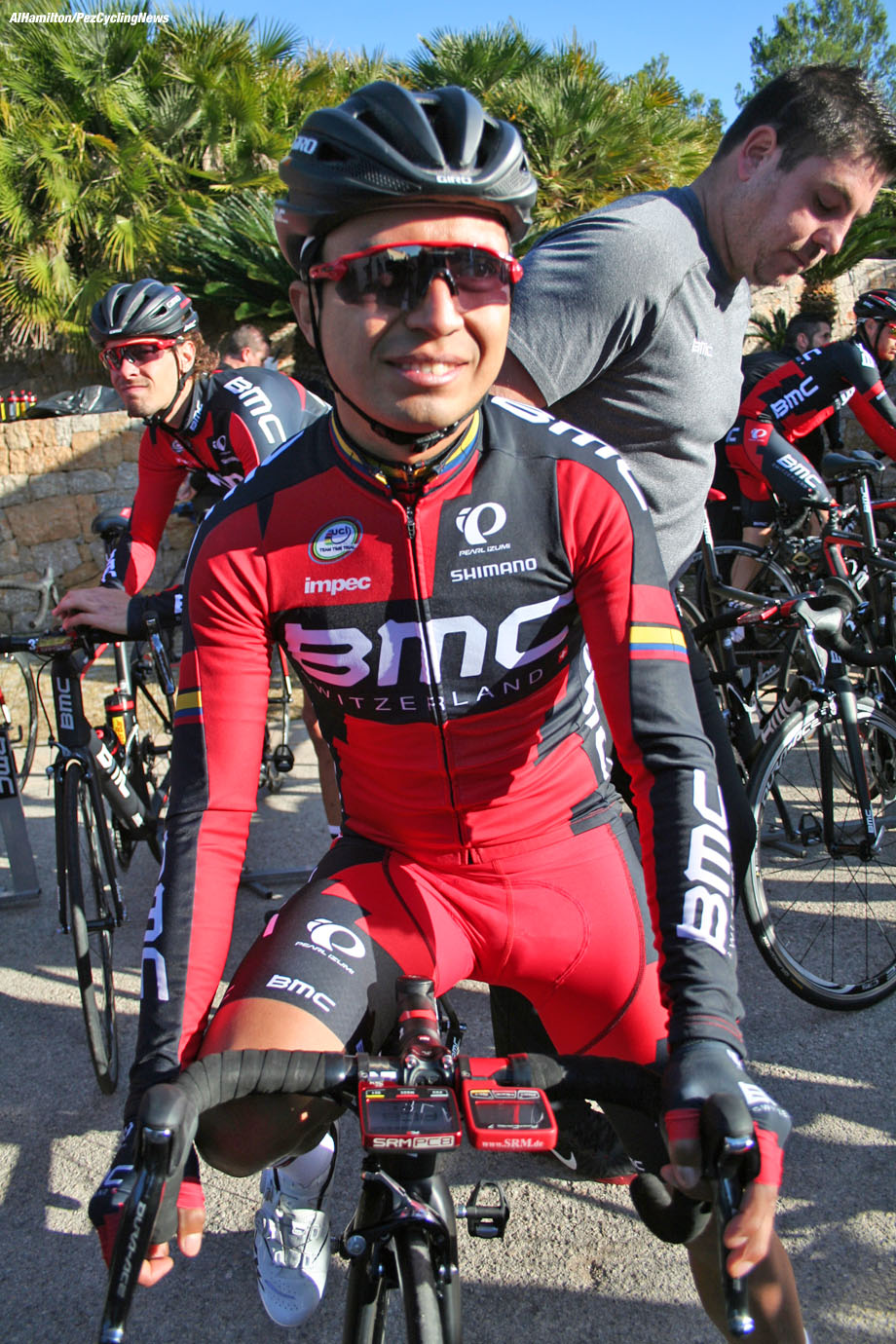 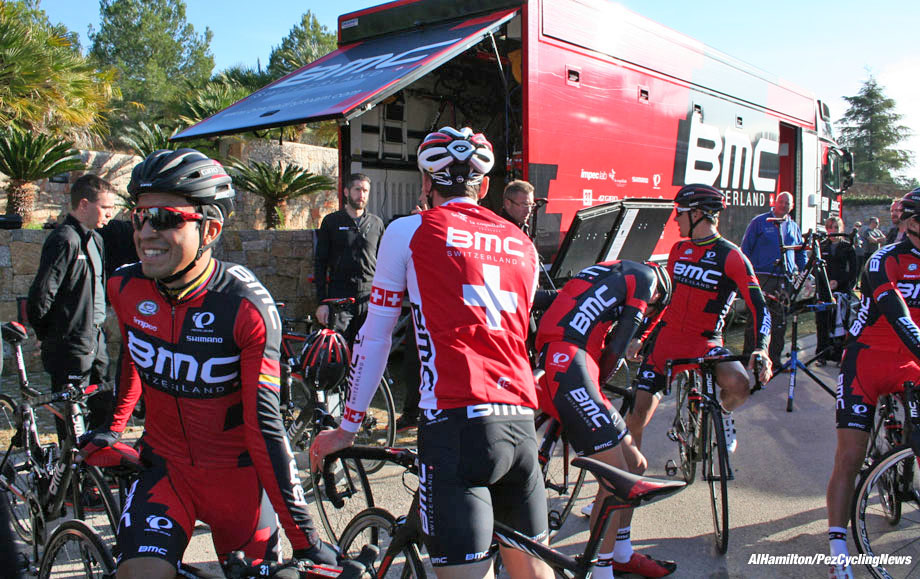 Off we headed towards Javea and the coast, which is a short flat ride. As they entered the town the group took a couple left turns and they were on the climb of Montgó and on the way to Denia and the port where the rich & famous moor their yachts and take coffee at one of the port-side bars. Today a part of the BMC WorldTour team would be the only customers, well it is December. 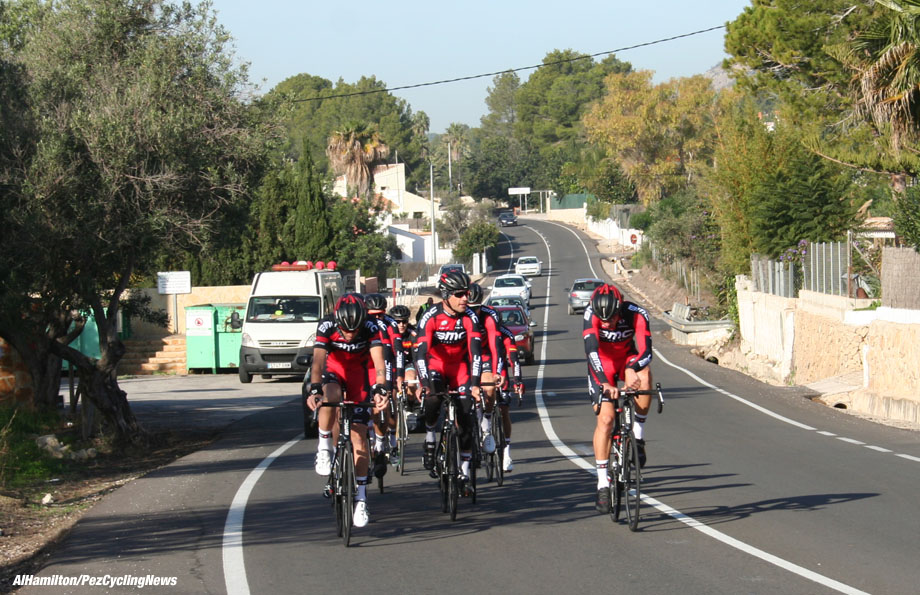 Quiet roads out of Denia 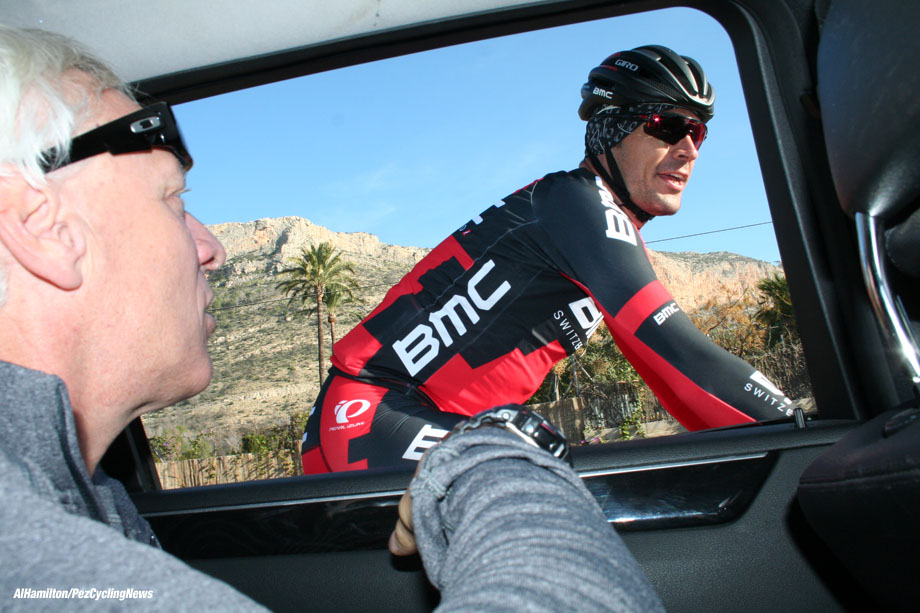 Manuel Quinziato back to the car to talk to Perry 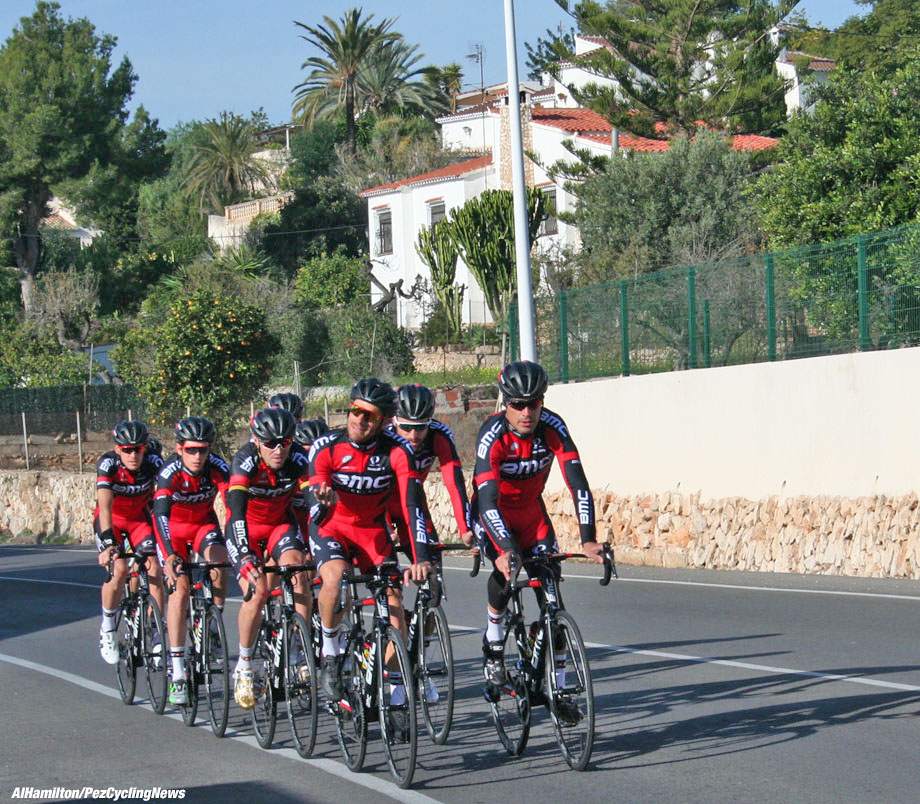 Nothing too hard today

It’s a perfect position looking across the port towards the Castle, blue skies, twenty degrees and not a breath of wind. 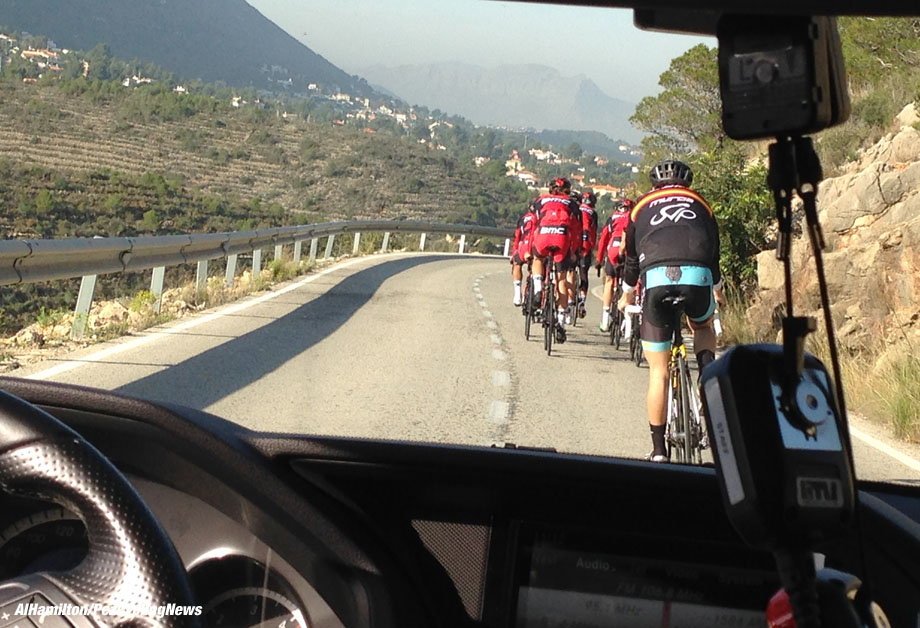 There was a little mist on the coast 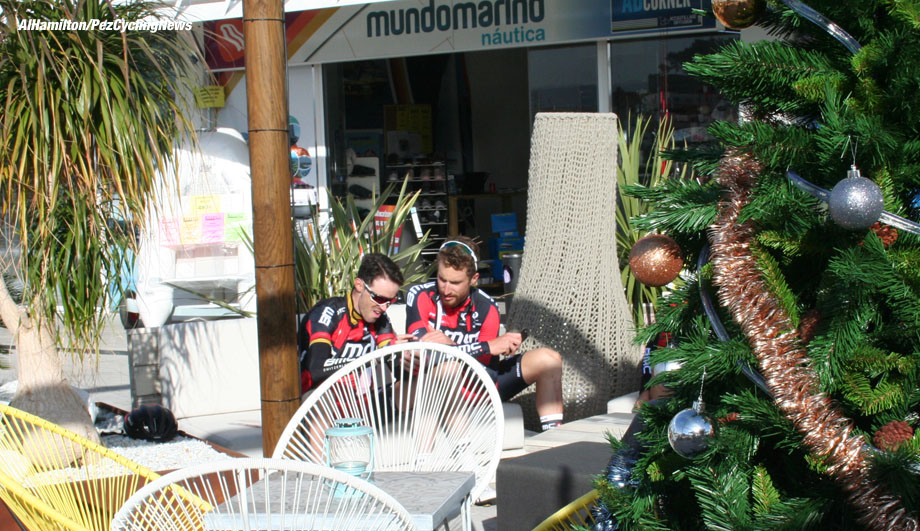 Sun and a Christmas tree 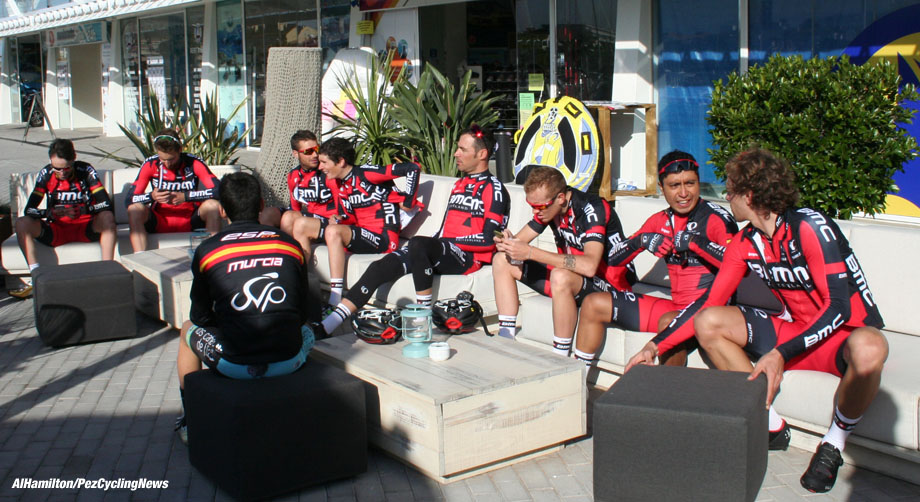 Talking to Max about Taylor Phinney’s crash was quite harrowing, Max was in the team car when it happened and knew it was bad when he saw the mechanic just put his head in his hands when he got to Taylor. I’ll miss the gory details, but it is unbelievable that he’s racing again. 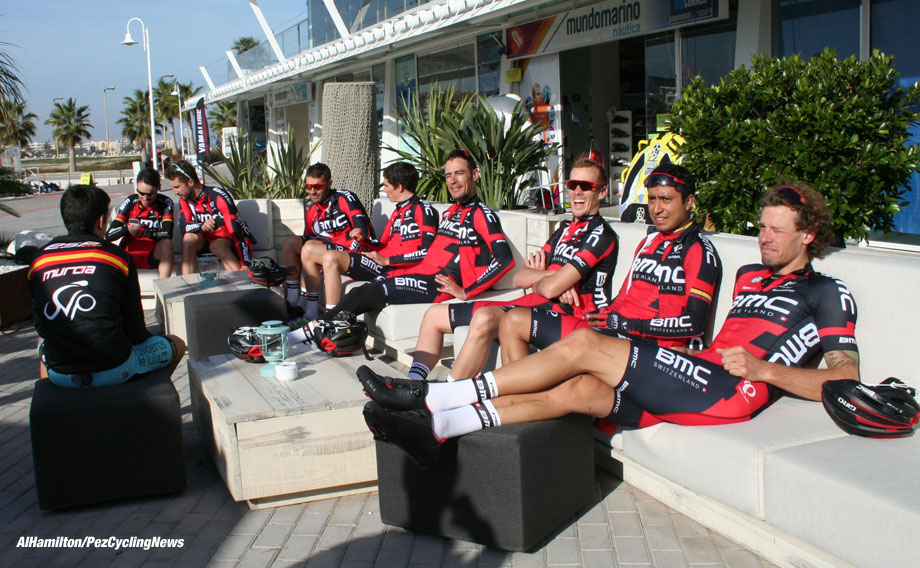 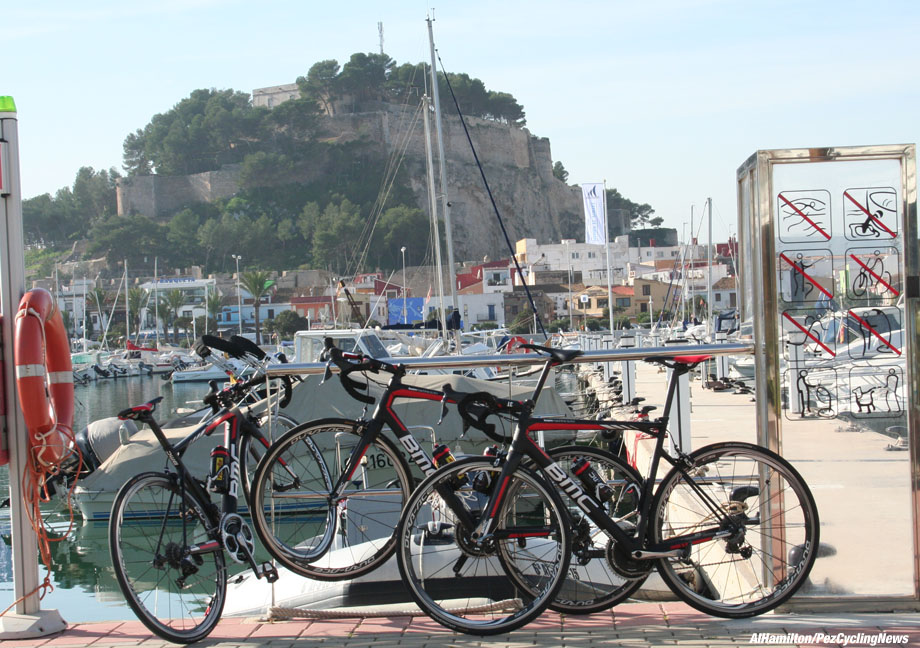 Not a bad place, Denia

Coffee, chat and sunbath over; it was time to take the same route back to the hotel. Samuel Sanchez was very happy to be there and was looking forward to the season, a good sign for man who will be aged 38 in February. I also had to congratulate Manuel Quinziato on his recent marriage to Patricia, she has appeared many times in Daily Distractions as she used to work on la Vuelta a España. 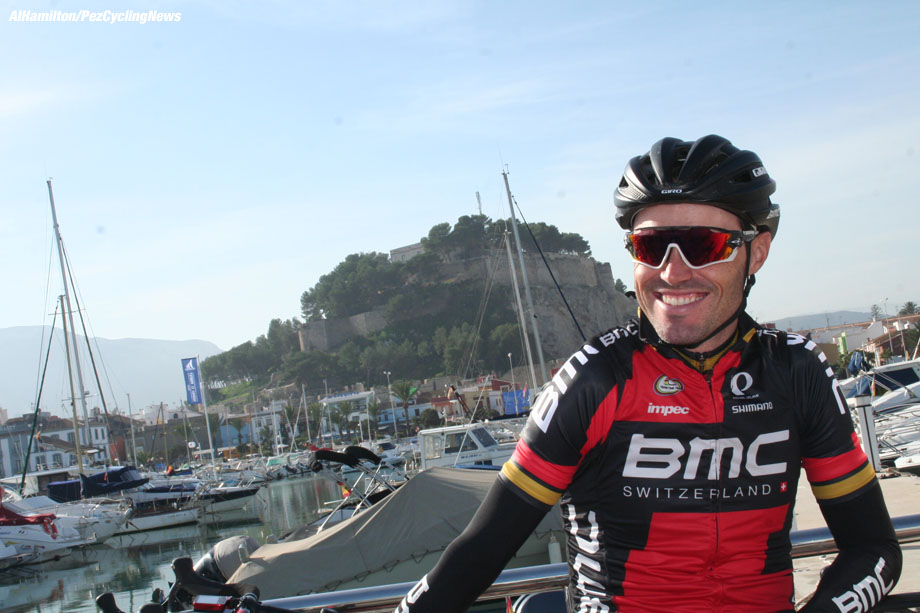 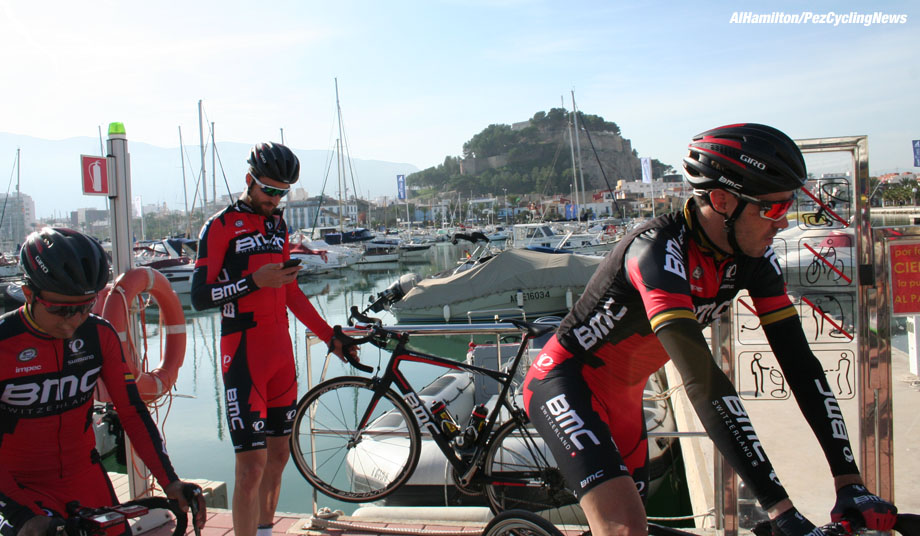 On the way back the chat in the car turned to power meters and Max remembering the first ones when he was a pro with Carrera. He remembers having this big box on the handlebars and yes, back then it was an SRM. 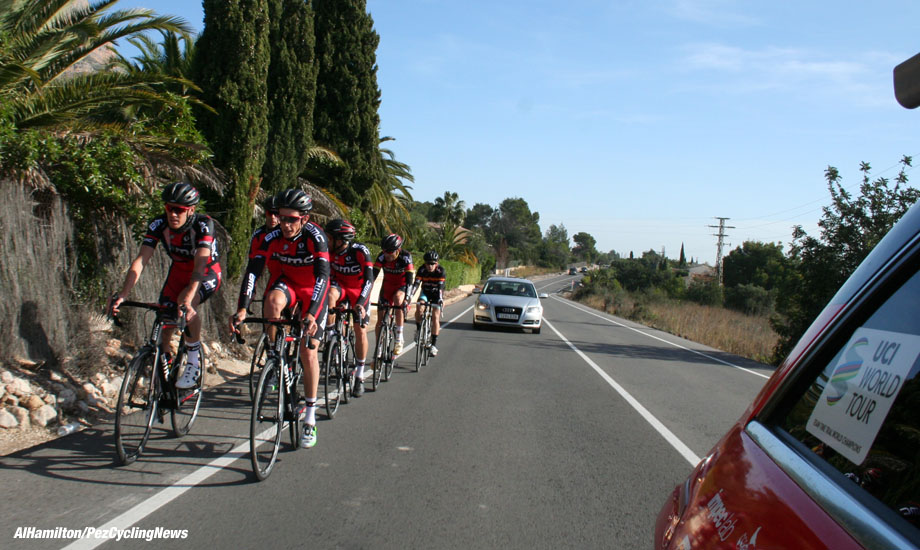 A Comfortable ride back for lunch

Lunch was the top quality you would expect from a WorldTour team chef, both chefs in fact. Healthy and filling all topped off with the best Tiramisu I’ve ever had. At my end of the table was Nico Van Looy of the Spanish website ciclo21, Andrew Hood of VeloNews and Kenny Pride of CycleSport Magazine with BMC team manager, Jim Ochowicz. 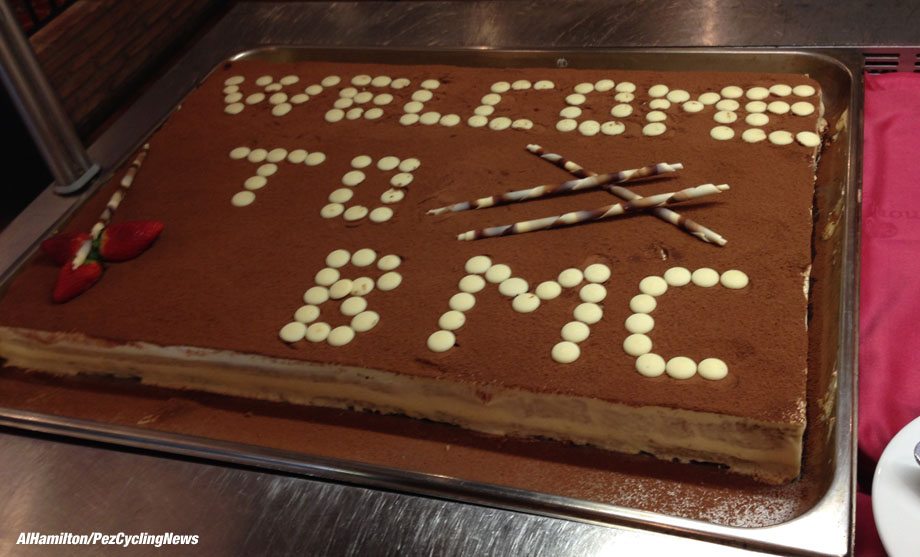 The talk at the table covered many subjects and it was helped along by the best wine, not from Andy Rihs’ vineyard, but picked by him. It was strong at 15·5% and we were sure this was to dull the senses of the journalists for the pending interviews. Made us all a bit sleepy, but the chat with Philippe Gilbert, Greg Van Avermaet, Richie Porte, Taylor Phinney and Rohan Dennis was as good as ever.

Keep it PEZ for the BMC interviews.