Roadside PEZ Paris-Nice Stage 5: PEZ-man in France, Daniel Thévenon, is still chasing the ‘Race to the Sun’ and as he heads south to Nice and the Mediterranean, he finds himself deep in the wine area of Beaujolais. With a clear head we join Daniel with some strange artwork on stage 5 of Paris-Nice.

You can catch up with Daniel’s Stage 1 and Stage 4 adventures.

It is Stage 5 of Paris-Nice. Five hundred meters to go to the summit of the Côte de Saint-Uze, situated 47 kilometers from the finish in Bourg-de-Péage. Classified as a second category climb, it stretches over 2.7 kilometers and serves up an average gradient of 6.5%. A molehill compared to what awaits the peloton in the three days to come, but it could play a role in determining the denouement of today’s relatively flat transition stage. 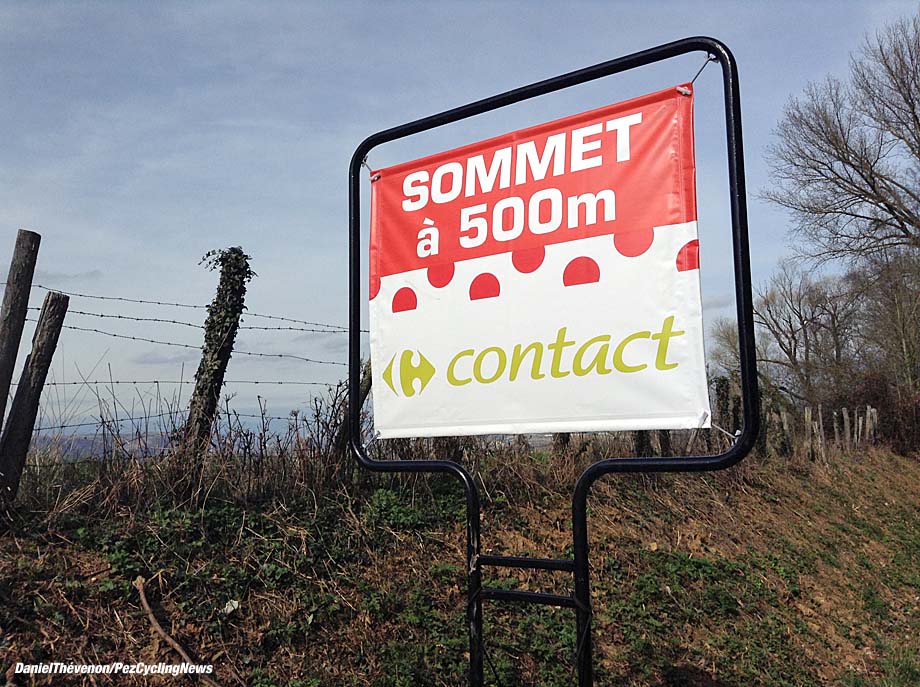 Amateur riders climb up the côte ahead of the race. The pros may zip past a little faster in a few minutes time, but one has to admire the valiant effort. These fellows are having a real go at this. 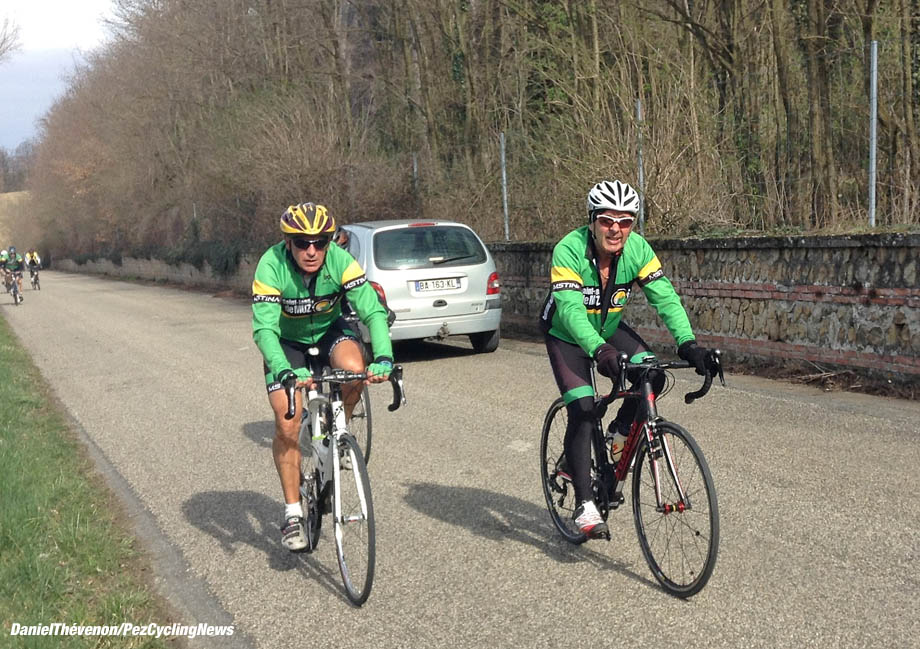 Somewhere along the uphill road, close to an orchard of blossoming cherry trees, a local artist exhibits his cycling-themed work. The riders appear to appreciate his style: Arnaud Démare has signed his Milan-San Remo victory portrait in person. “Magnifique! Merci”, he wrote on the canvas. 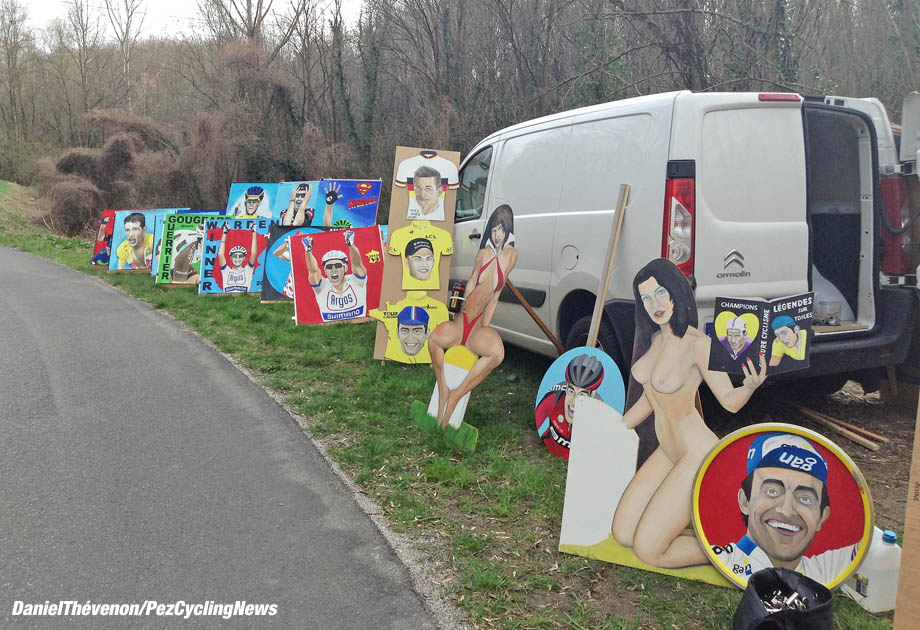 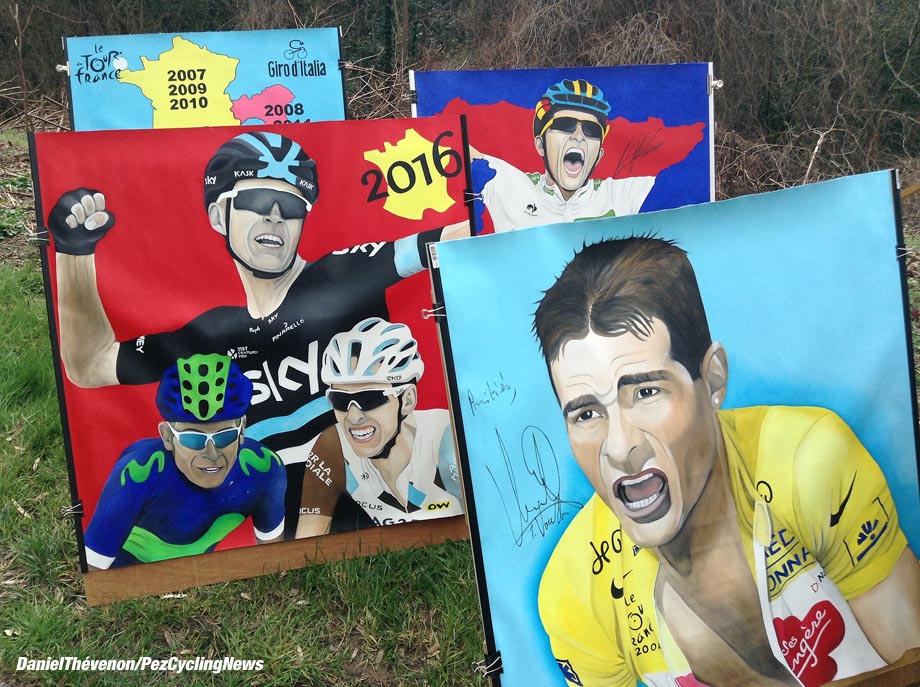 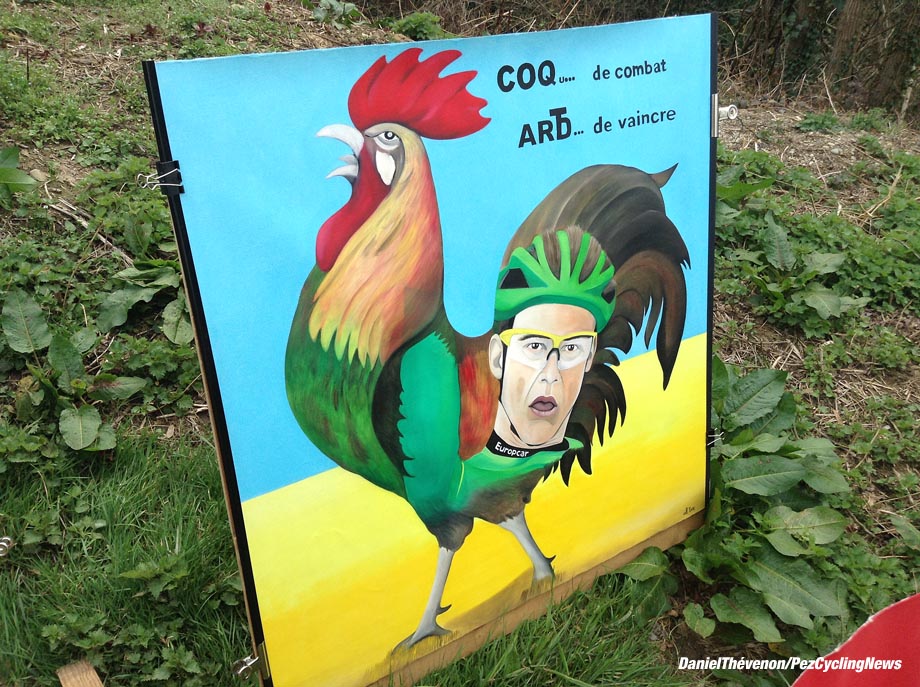 The summit. Whoever cuts this line first will scoop 7 points in the King of the Mountains rankings and pocket 75 euros. That’s right, 75 euros. What do you mean, it isn’t straight? 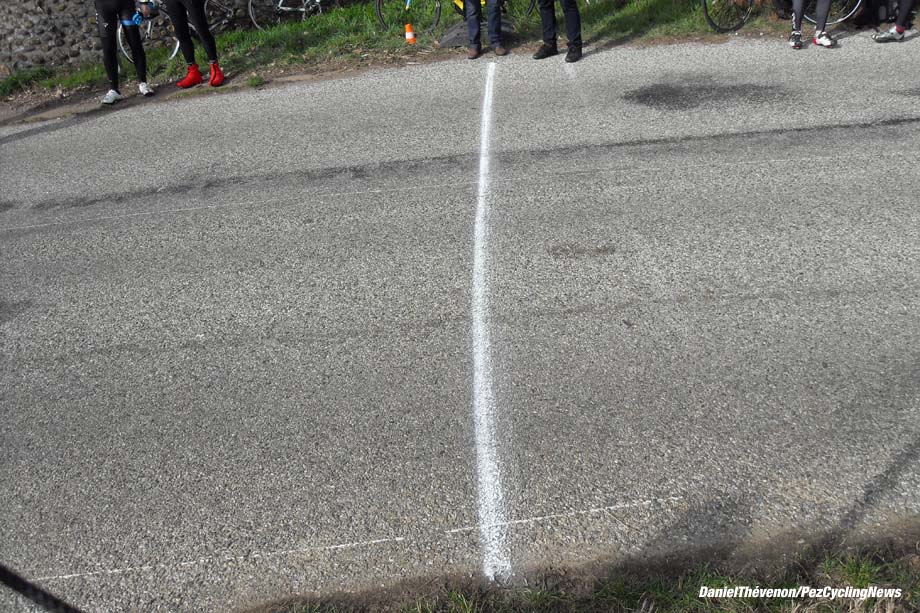 A club of cyclists from Saint-Péray in the neighboring Ardèche department waits at the summit. The mood is very jovial. Perhaps that has something to do with the much-improved weather. However, an irate motorist soon storms through, sounding his horn to protest at the spectators obstructing the road. Not everyone in the Drôme is delighted to welcome Paris-Nice. 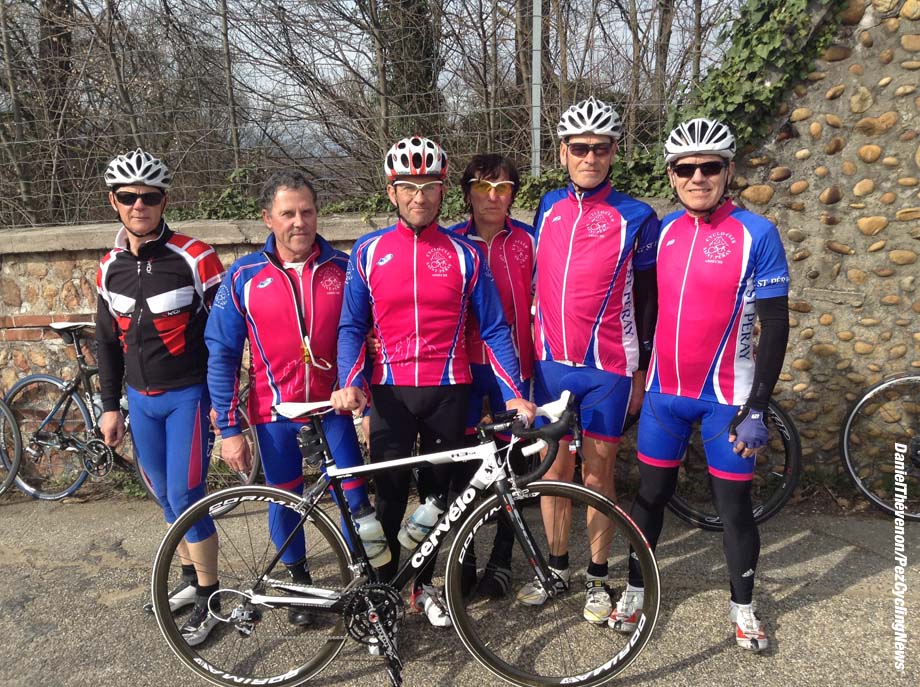 Nearby, a Cofidis Solutions Crédits team car is on standby. When the peloton arrives, the soigneur will distribute bidons to Geoffrey Soupe, Christophe Laporte and co. Elsewhere, a vehicle for Team Sunweb is stationed. The driver is asked about Warren Barguil’s brush with the gendarmerie at Mont Brouilly the previous day, but he has nothing to declare. “Everything has already been said in the press”, he says. 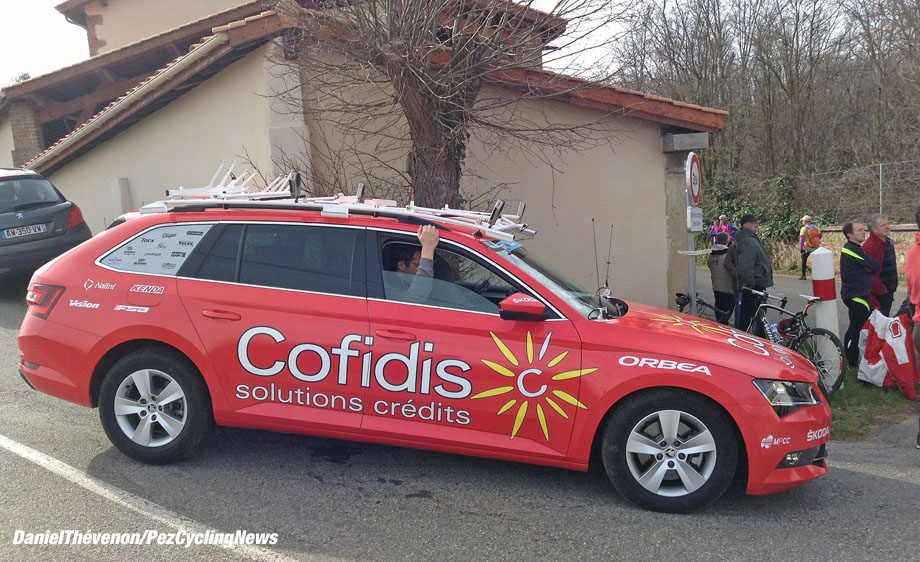 The race commissaires arrive on the scene shortly before the athletes and prepare to record the results at the summit. Paris-Nice may be a World Tour race but the methods remain quite rudimentary. The driver will read out the numbers of the contestants as they cross the line, while his accomplice jots the information down on a minuscule notepad. Old habits die hard. 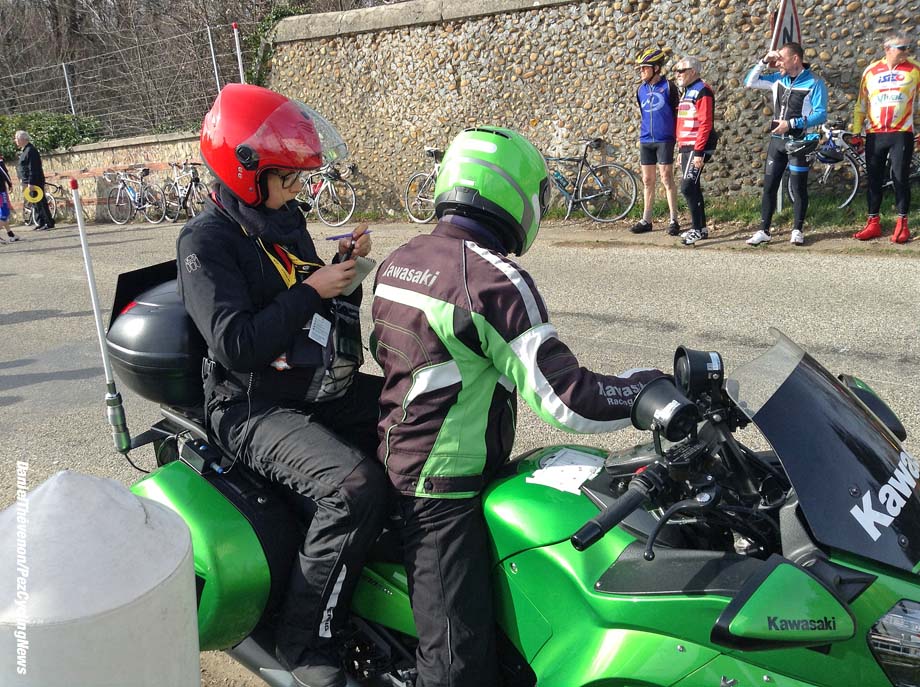 Spectators at the summit brace themselves for the arrival of the riders. The race is slightly behind schedule but a break-away of six is expected shortly. It holds a lead of 2 minutes and 20 seconds over the peloton. 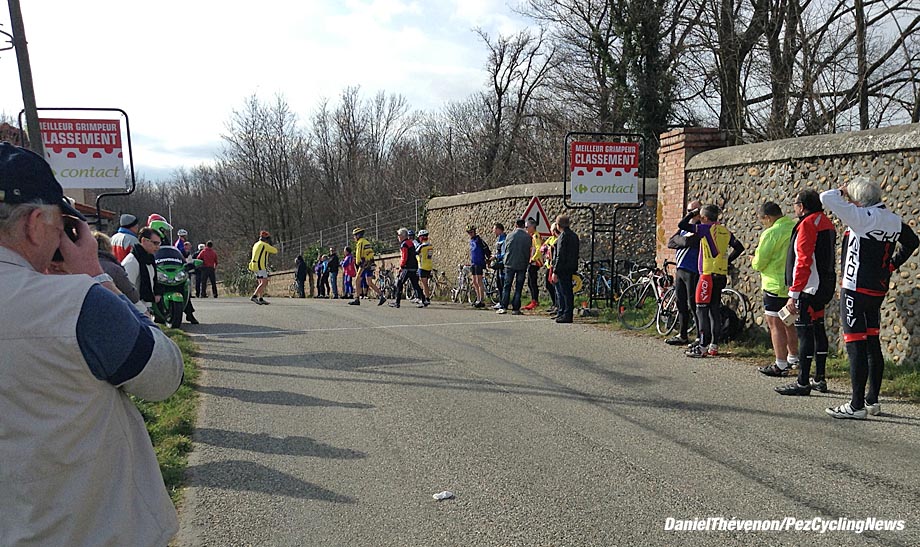 The race helicopter appears in the sky, a sure sign that the action is drawing closer. The flying machine’s unusual presence in this rural area makes the local dogs fall silent and scares away the horses. 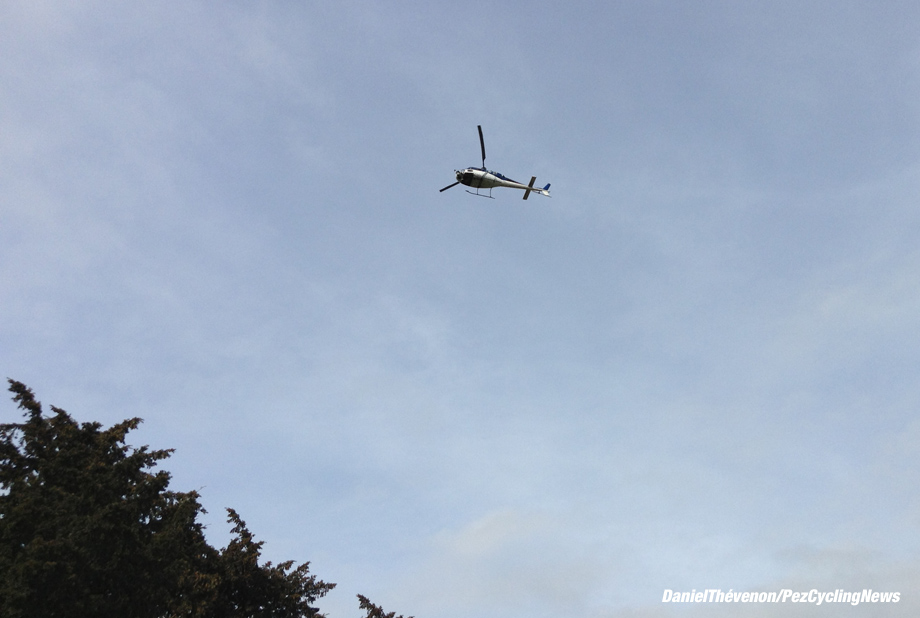 France’s Pierre-Luc Perrichon is first to the top. The Fortuneo Vital Concept rider will not be relieving his team-mate Romain Hardy of his polka dot tunic just yet but a man can dream. “It would make sense for Romain to focus on the General Classification and leave the jersey to me”, he proposes after the stage. In Perrichon’s wake come fellow fugitives Natnael Berhane (Dimension Date), Lilian Calmejane (Direct Energie), Federico Zurlo (UAE Abu Dhabi), Rémy Di Gregorio (Delko Marseille Provence KTM) and the local boy Axel Domont (AG2R-La Mondiale). 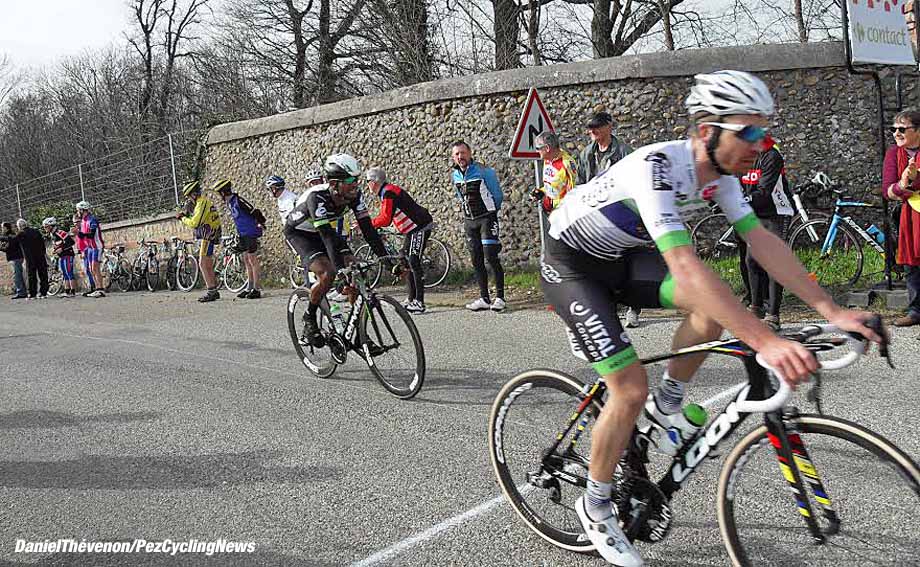 The peloton crests the Côte de Saint Uze moments later, spearheaded by the Cofidis and Lotto Soudal formations. Some of the spectators had expected to get a close look at their favorite riders as they slowly inched their way to the line, weighed down by the gradient. That the lycra-clad mass should, instead, rush past faster than a TGV personally piloted by Usain Bolt comes as something of a disappointment. The spectacle is over in a matter of seconds. But they were there. 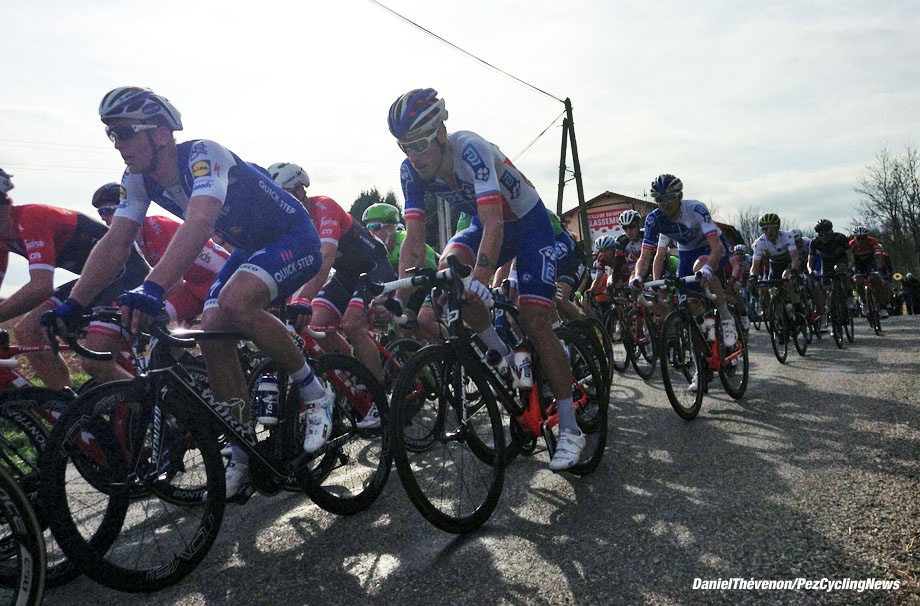 German national champion André Greipel rides close to the front, making no secret of his lofty ambitions. ‘The Gorilla’ will beat his chest in Bourg-de-Péage. 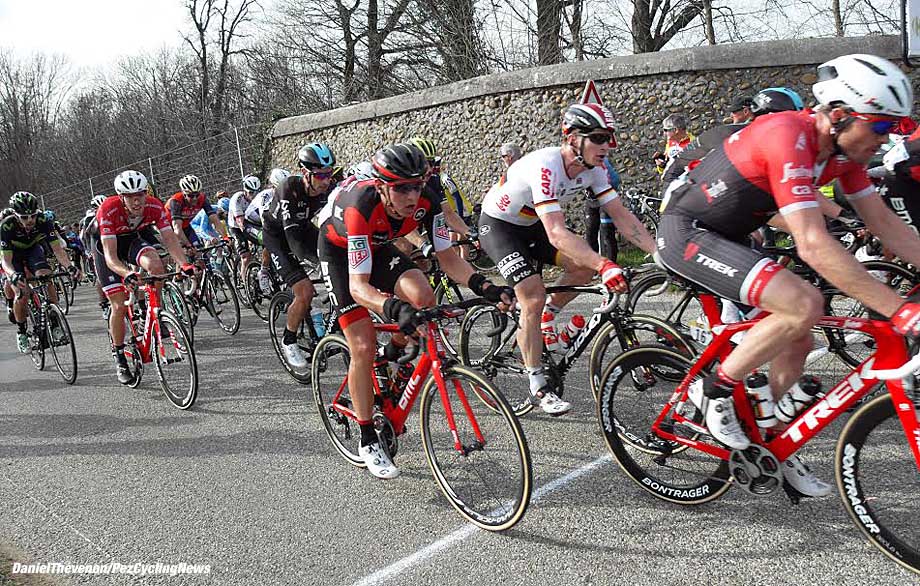 In the Permanence, relocated inside Bourg-de-Péage’s Centre culturel Jean Cocteau for the occasion, race officials distribute sheets of paper detailing the day’s results. The arid statistics lack a certain poetry. 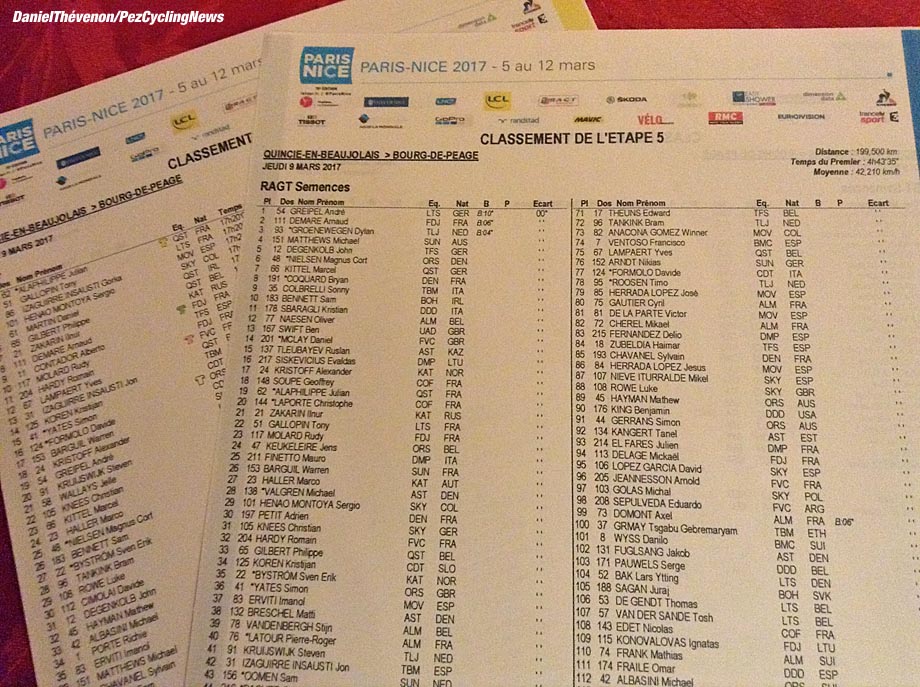 But the journalists present in the Salle de Presse are busy listening to race leader Julian Alaphilippe, who has dropped by to answer their questions. These are kept to a minimum due to the long transfer to Provence that awaits the riders this evening. “Tomorrow a new race begins”, the wearer of the maillot jaune defiantly announces. “Do not expect me to ride conservatively. Attack is the best form of defence.” 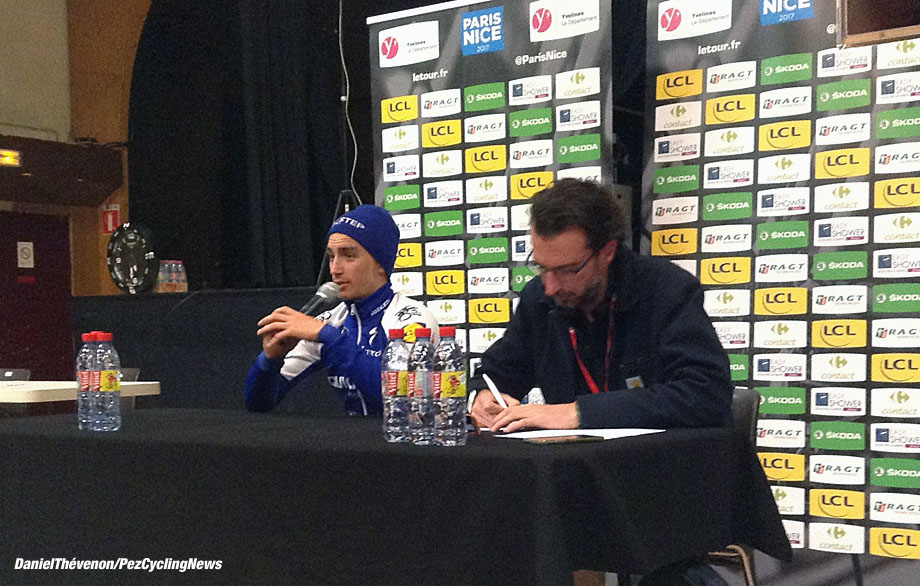 # More to come from Daniel from Paris-Nice and Ale Federico will be roadside at Tirreno-Adriatico. #