Every year, cyclocross gets bigger and bigger in North America, and it’s getting to become the cycling discipline that the “cool kids” do now, with nothing cooler than the Worlds coming to Louisville in 2013. However, there’s a place where cross is soaked deep into the mud like nowhere else, and that’s Belgium. And since I’m living in Belgium for a few months, let’s join the craziness shall we?

I’m on sabbatical this year from Brock University, so we’ve planned for years to make this a travel year for our family. So when planning my research visits, two rules were part of my hidden agenda: 1) avoid living in winter as much as possible for a year, and 2) live deep in the heartland of cycling during cyclocross and spring classics.

Thus, I conveniently find myself visiting Brussels from November – January with my colleague Romain Meeusen, who also coincidentally does sport science support for the Lotto team, at the Vrije Universiteit Brussels. And in the spring, I’ll be back living in the Netherlands during the Classics season.

As soon as the family was reasonably settled, the next priority was to target my first cross race, the GVA Trophee GP van Hasselt. 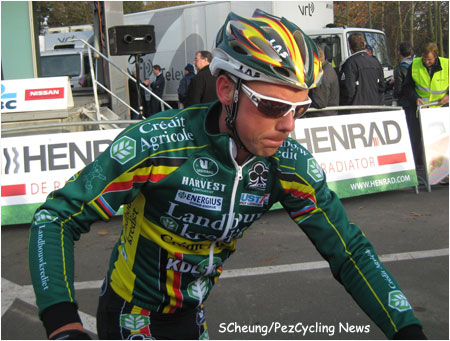 You can’t talk CX without starting with Sven Nys, the Cannibal of Baal. 24 previous editions of the GP Hasselt, and Nys has won the last 7 straight and 8 of the last 9! One of the best mudders on the circuit, Nys proved in Niel eight days prior that he’s still got plenty of speed in those legs and smarts in those brains with a solo attack and victory on a fast course.

Kevin Pauwels started knocking on the CX doors last season, and this season has blown the hinges off, utterly dominating the first half of the season. But the CX season lasts over 5 months, and it remains to be seen how he fares once the ugly weather descends and whether he can last the whole season. After seeing him in person, call me a believer, but somebody explain the left-handed bike carry please! 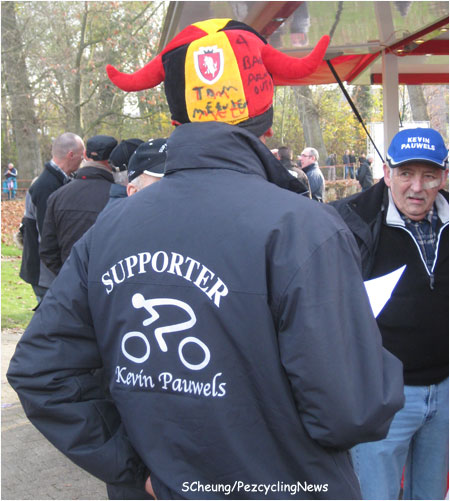 First rule of true CX stardom: you’re nobody without your own supporter’s club, complete with club clothing and ideally flags and umbrellas with pictures of you on them. We spotted supporters club for Pauwels, Nys, Wellens, and even Espoir rider Floris den Tier – start them young! 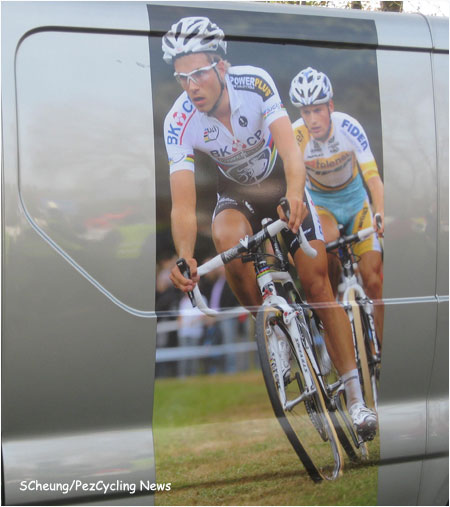 And if your rider isn’t competing, then there’s no such thing as a “cheer for your team anyway” mentality. With Niels Albert out due to breaking his hand this past Tuesday in a training crash, this was the only sign of the Belgian Champion or his supporter’s club, and the BK-CP area was pretty subdued and empty of crowds. 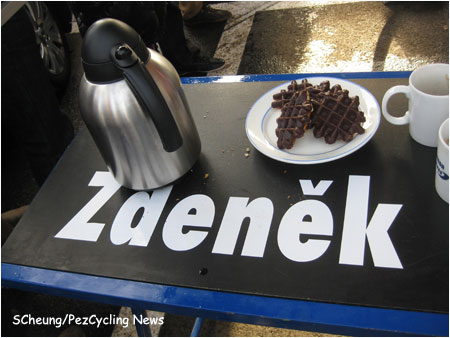 What to do if you’re not Belgian like two-time reigning World Champ Zdenek Stybar (Czech Republic) and don’t have your own Belgian supporter’s club? Well, you compensate by having your own huge bus that’s about twice the size to the other stars’ camper vans, and also having your name on your tables just in case you feel ignored. Are chocolate waffles really the pre-race meal of champions? 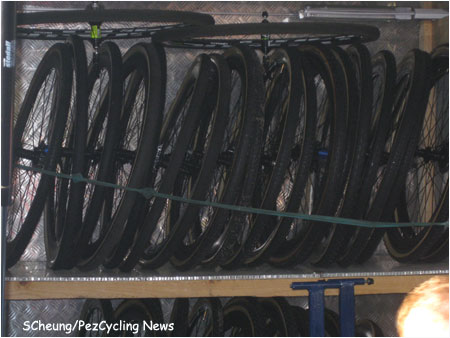 Second rule of true CX stardom: anyone can have one spare set of wheels, but I lost track of counting the spare sets of wheels in former World Champ Bart Wellens’s camper. You can also count on three race/spare bikes plus another one set up on the trainer.

The pre-rides of the courses are done earlier in the day, and the final warmups are done on the trainer. Some riders are chatty, like Wellens carrying on a long conversation with his entourage. Nys was a circus-magnet, with the fans and paparazzi stampeding to his corral when he emerged for his warmup. 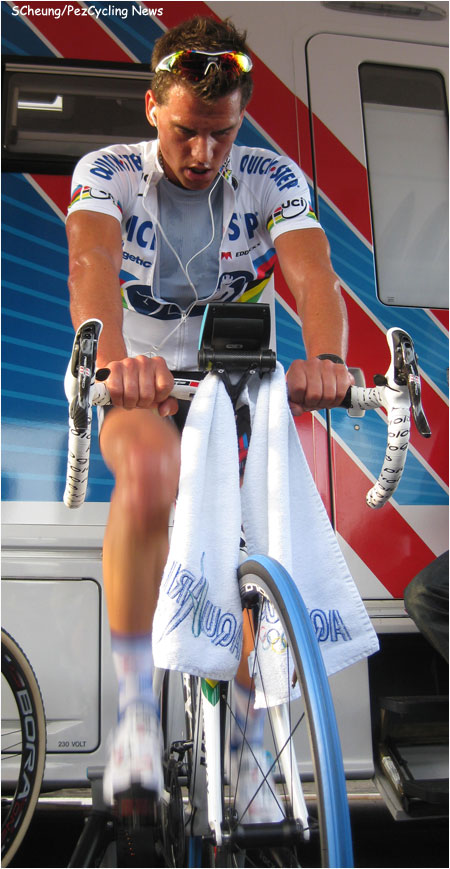 Stybar of Quick Step was all business and oblivious to everyone around him, not even raising his head or eyes off his front wheel the whole time. His Eddy Merckx bikes looked suspiciously like the Ridley X-Nights ridden by Telnet-Fidea, proving that, even in the carbon age, the practice of rebranding bikes is still alive and well. On the other hand, there’s no denying that those are Campy 11 shifters, so they can’t be too shabby in the mud. 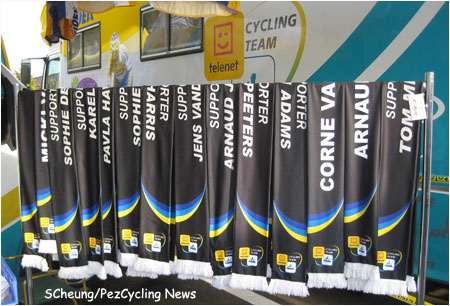 Chapeau to Telnet-Fidea for their sponsorship of what seems like half the CX peloton, with pros, Espoirs, womens, and juniors on the squad. A giraffe might be needed to model all of the custom rider scarves… 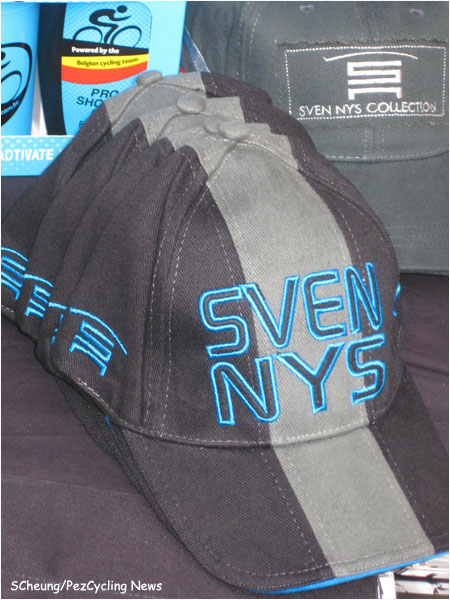 Or you can be the Cannibal, and not only have a team souvenir stand, but your own stand selling your own clothing line.

Enough with the pre-ride and the stroll through the riders’ area. Let’s get back on course with the action. 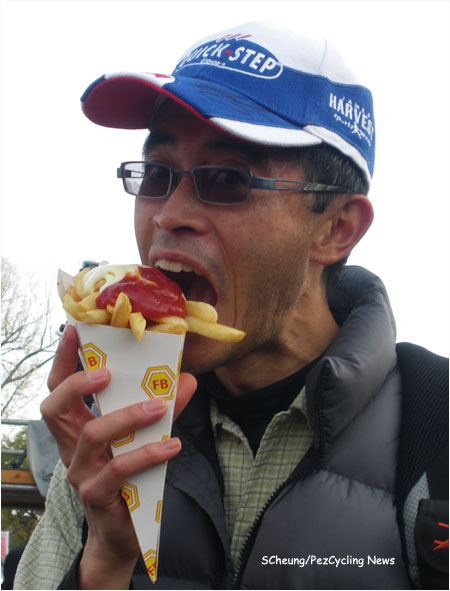 But first, since I didn’t build up the courage to pinch one of Stybar’s chocolate waffles, I had to refuel myself somehow. My degrees are in exercise science, not sports nutrition!

There’s no denying the sports truism that the risk of carnage draws in the audience – why else would there be the masses around the big double log barriers? My boy Zachary caught this image of Bart Aernouts on the 7th lap about to biff hard into the second log after landing over-rotated onto the front wheel. An A&A Drinks rider dismounted and ran the logs one lap, but left his bike at the first log when he didn’t lift it high enough. Radomir Simunek of BK-CP won the crash of the day honours, severing his fork smashing the logs on lap 2.

With no real hills or mud due to the unseasonably warm and dry weather (we haven’t had rain in Brussels since we arrived Nov 1), the main technical challenge came down to the long sand stretch. By long, I don’t mean a few metres, more like 100+ metres right after a 90 degree turn. The top men made it seem easy, but a lot of running happened in the back half of the pros and in the other categories. 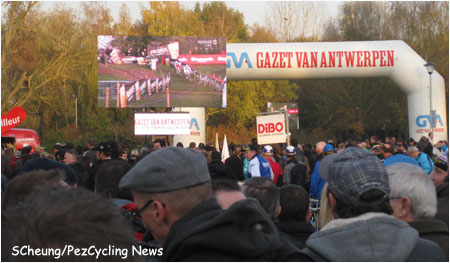 Despite the massive crowds, racing CX in Belgium can still be the loneliest experience in the world. As soon as the favourites go by, the crowd all turns around and drink their beers while staring transfixed at the giant TVs set up around the course. The end result is that the majority of the peloton race in this tunnel of silence staring at the backs of people the whole time.

This was the start of Pauwels’s double-dip weekend. He was completely imperious today in Hasselt, easily making the final break with Nys, Stybar, and an emerging Tom Meeusen (the hero for my boys Zachary and Jacob after watching him repeatedly jump a deep ditch at the race in Niel), controlling the break and preparing for his winning sprint by being the first into the last 180 degree corner 75 m before the finish. Pauwels completed the weekend sweep with a brilliant solo victory the next day in Aspere-Gavere on a hilly course. 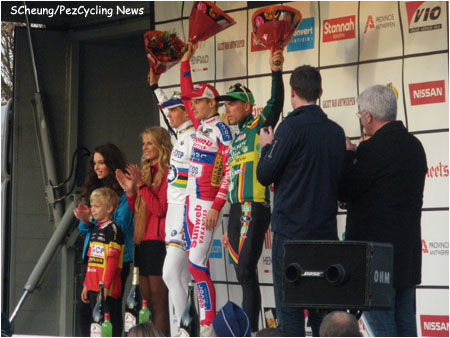 The podium of Pauwels, Stybar, and Nys. Sure, the podium almost always consists of these guys plus or minus Niels Albert and Lars Boom when he parachutes in, but no way does that mean that CX is boring to watch, as brilliance has its own fascination.

With fans this young, there’s little chance of CX ever diminishing in popularity in Belgium. The difference really is that, on TV or live, cycling is a spectator sport for the masses rather than the converted, with most of the audience never having touched a racing bike in their lives. Best of all, I can even walk into my lab on Monday and talk knowledgably with my colleagues about the weekend’s races without being stared at like I just came from Mars.

Man, I’m going to enjoy my winter in Belgium!

Stephen Cheung is a Canada Research Chair at Brock University, and has published over 60 scientific articles and book chapters dealing with the effects of thermal and hypoxic stress on human physiology and performance. Stephen’s currently writing “Cutting Edge Cycling,” a book on the science of cycling due out April 2012, and can be reached for comments at [email protected] .