Roadside PEZ: In Search Of A Kermesse

The sun was warm on our skin as we sat down outside the cafe on the start line at Eernegem, the coffees had just arrived and we had all the time in the world to look at bikes and talk to riders. But there was something wrong – English voices and a guy with a ‘Billy Bunter’ style cap; ‘what the heck is he doing here?’ I asked myself.

A trip to the toilet, where there was a poster on the wall, confirmed my fears; “Penny farthing race, 8 laps of a 1.4 kilometres circuit, start time 2:00 pm.”

It was some trepidation I approached my companion; ‘I have to talk to you Vik…” 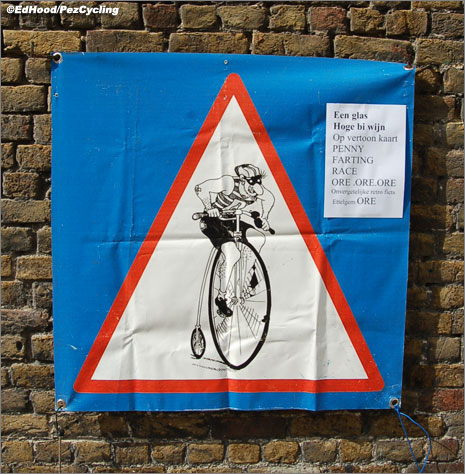 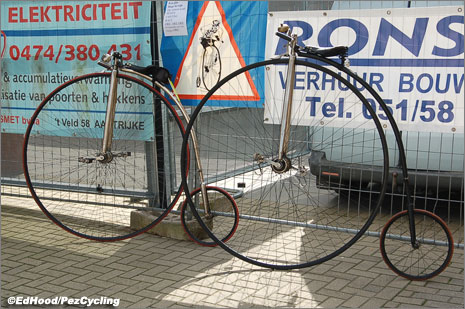 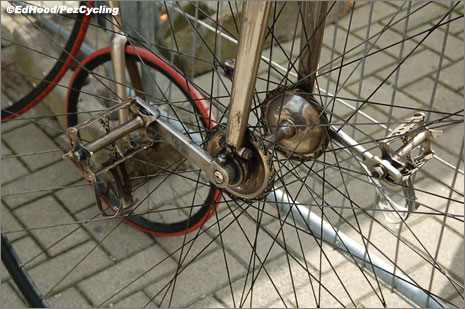 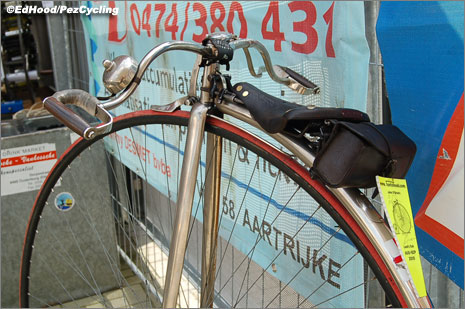 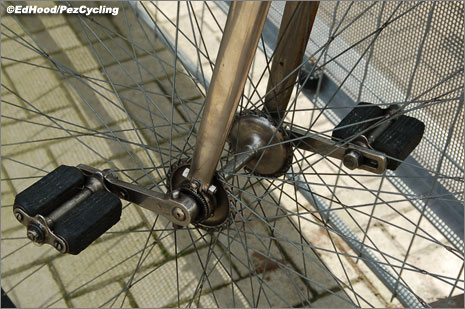 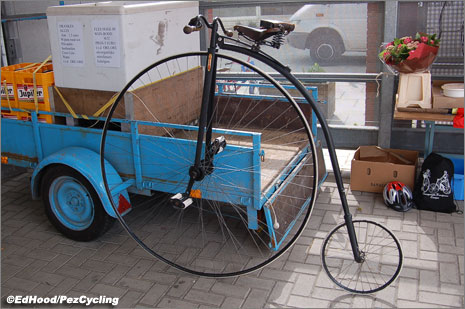 Around 35 seconds later the Fiesta was hurtling back out of Eernegem.

We searched every square metre of Sleidegem but couldn’t find the damn sign-on cafe.

As a last toss of the dice we headed off into the fields behind the village – and there we were; bikes, guys with hi-viz vests, girl friends with wheels, guys with big stomachs, hanging over the barriers and the sign-on in a marquee. 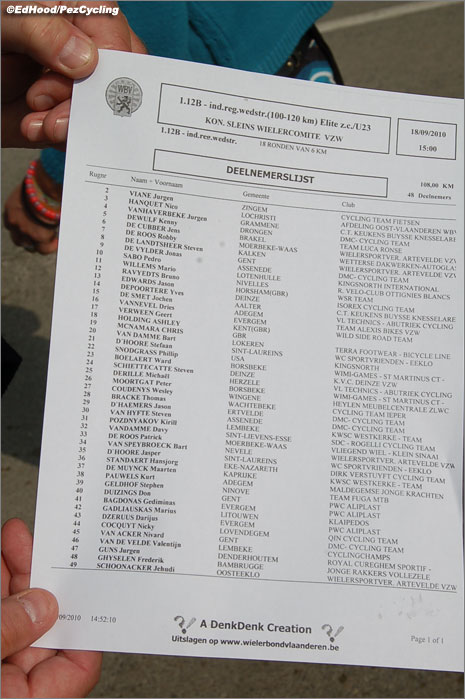 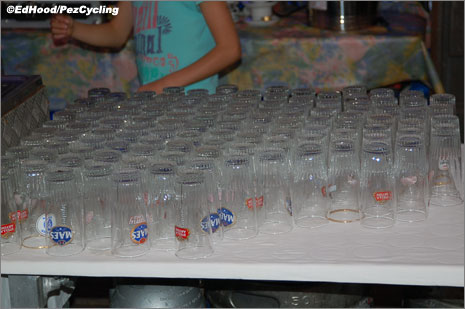 We soon had a pils and our one Euro start sheet; not a big field – 49 riders.

If this was March it would be 149, or more, but it’s a long season and many riders are already thinking about their Spring Campaigns. 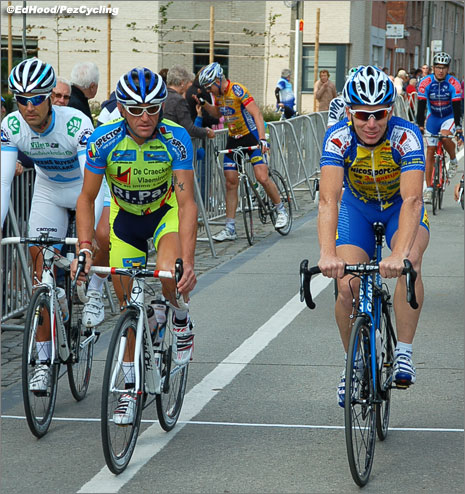 Van Speybroeck in the middle, Mario Willems on the right. 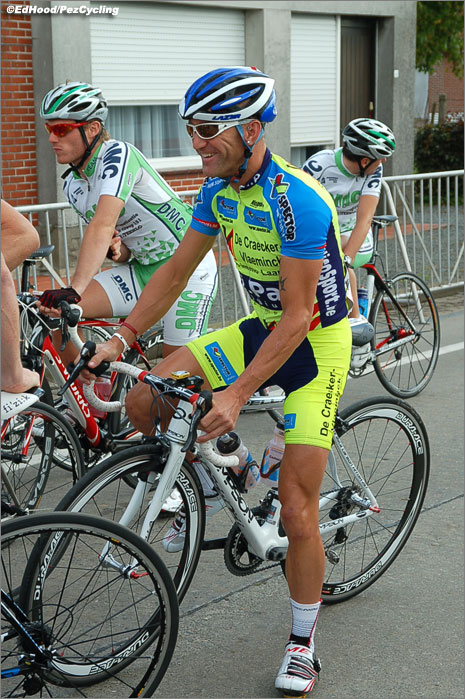 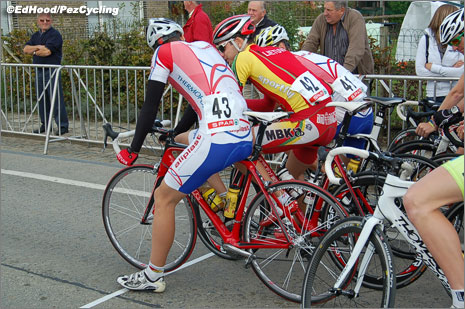 It looked to us like a straight show down: Kermis King, Mario Willems (25 wins in 2010) and fellow Belgian Bart Van Speybroeck (8 wins in 2010) versus the Lithuanians of Aliplast. 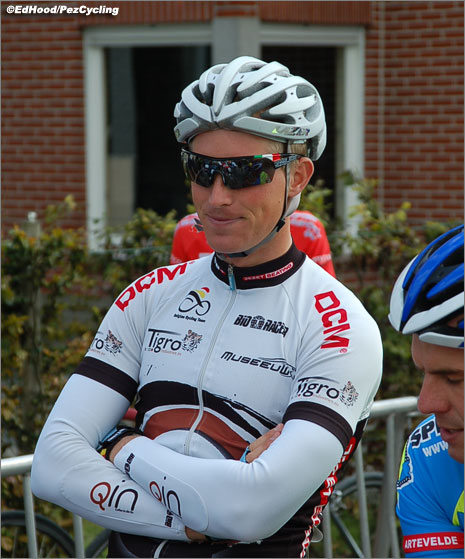 James Spragg’s QIN team mate and Gent six day rider, Nicky Cocquyt was there and so too were ex-pros Jehudi Schoonacker and Jurgen Guns. 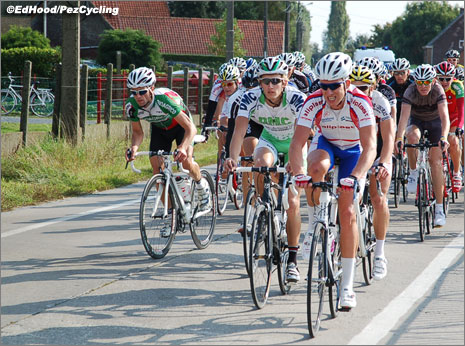 A break went early and flurries for the seven euro lap primes apart, it wasn’t the worlds hardest race – but it was early days.

Mr. Pez himself once said to me of criteriums and kermesses; ‘a buncha guys turn up, ride round in circles, one wins then they all go home!’

But like any art form, kermis watching has it’s subtleties – you have to get the right barrier spot, near the finish and a ready supply of pils; know your Euro pop; be comfortable conversing with eccentric people in varying states of intoxication; avoid being caught ogling the riders wives and girl friends and you have to know your riders.

The music at Sleidinge wasn’t the best – it was too modern – the likes of Kate Nash and James Blunt don’t belong at the kermises; ideally you need 70’s disco, bubblegum and Euro Pop. 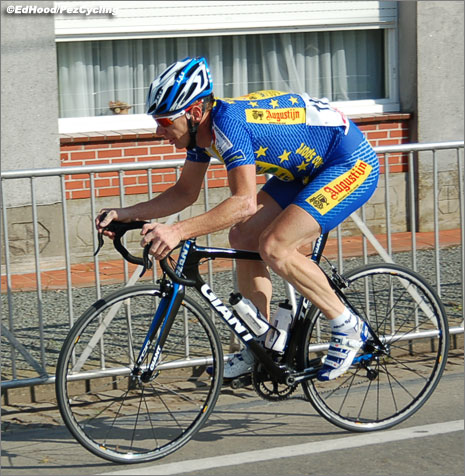 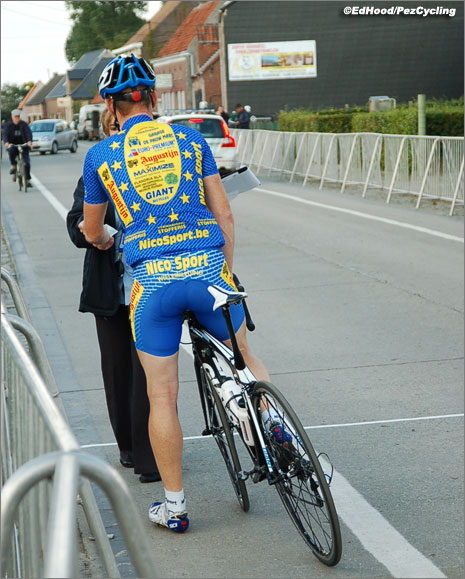 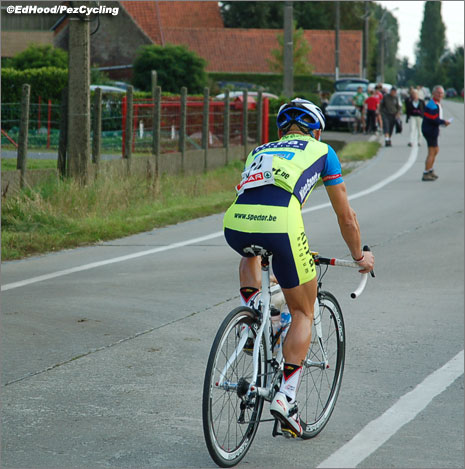 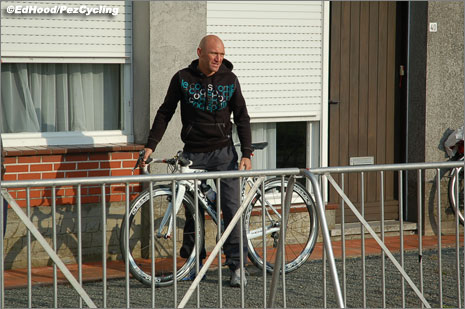 At half distance there was a minor sensation as Willems and Van Speybroeck handed back their numbers to get their five Euro ‘dossard deposits.’

Mario’s wife would tell us later; ‘he did not have good legs; too many races.’ but we wondered if it was more the thought of a bitter finale with those big Lithuanians that caused him to climb off.

The next day he notched win number 26 – the reigning king of the 100 K kermises, big Guy Smet is on the same number so it’s going to go to the wire. 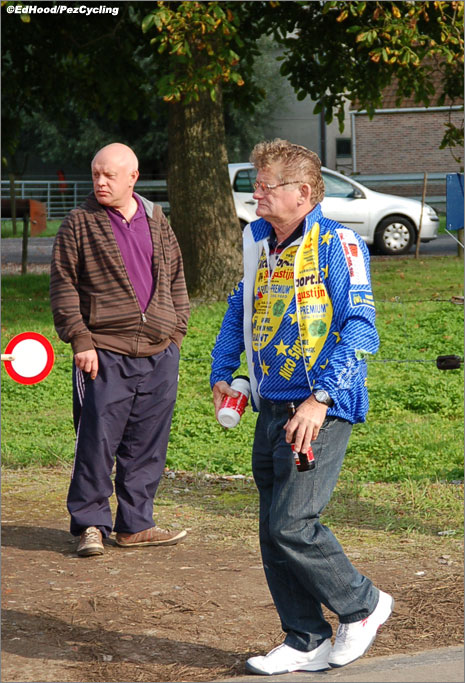 Someone asked Mario’s soigneur about his boy’s abandoning; ‘that’s kermis racing!’ he grumped back between slugs of his pils.

Meanwhile, the BlackBerry flashed to tell us that Mosquera had won the stage but lost the GC down on the Bola del Mundo. 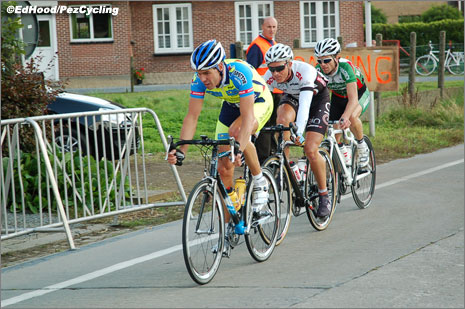 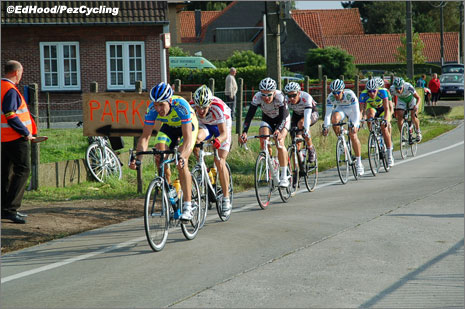 Into the last third of the race and there are eight clear, including big Lithuanian track rider Gediminas Bagdonas and Nicky Cocquyt.

But there’s a lot of talking going on; ‘are you going to work or not?’ 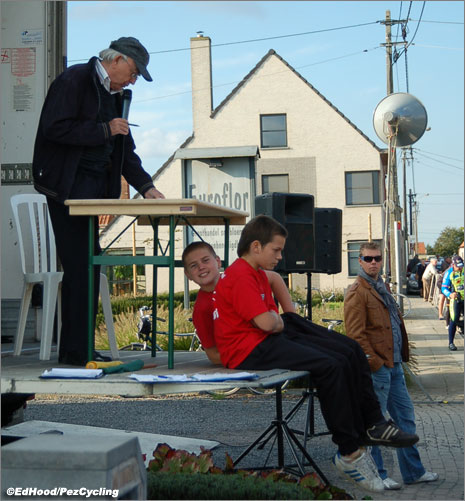 The laps tick over and after 19 circuits, the speaker tells us; ‘laaste ronde! dernier tour!’ 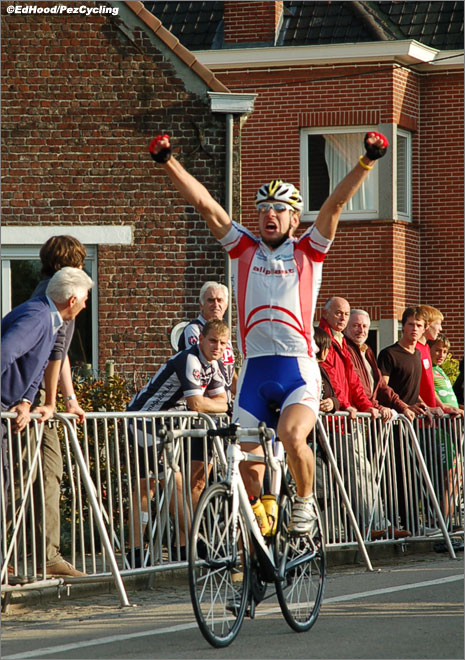 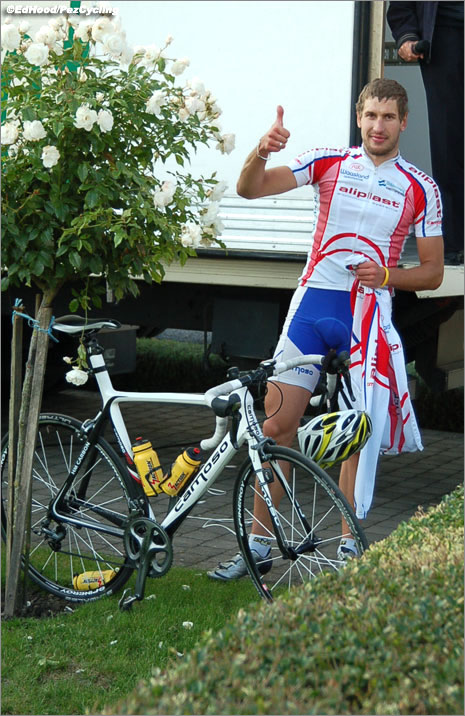 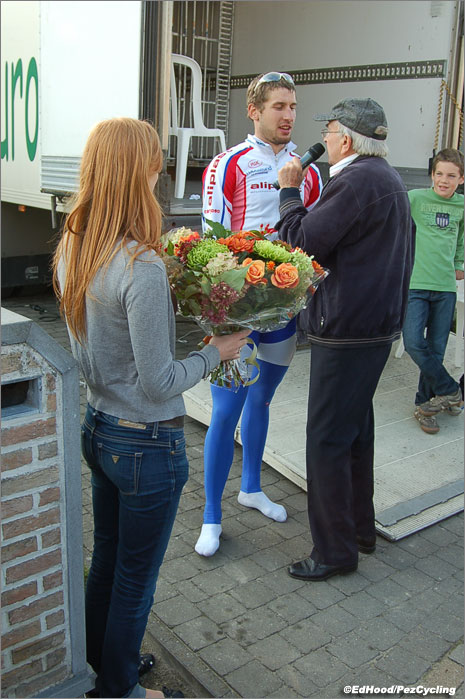 Bagdonas is too quick for the rest and Cocquyt has to be happy with second.

The Lithuanians speak English and Bagdonas tells us; ‘this is my tenth win of the season in Belgium, I am a track rider and this is part of my preparation for the World Cups.

My event is the omnium and I need to make sure I qualify for the Worlds and the London Olympics.’

His soigneur tells us he’s a good boy; ‘he has respect!’ 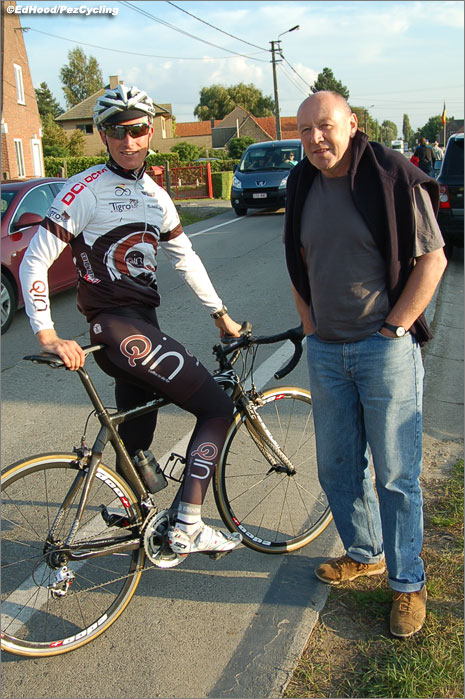 Nicky Cocquyt explains that the finale was ‘political’ with riders trying to buy and sell the race and he got baulked when Bagdonas jumped. 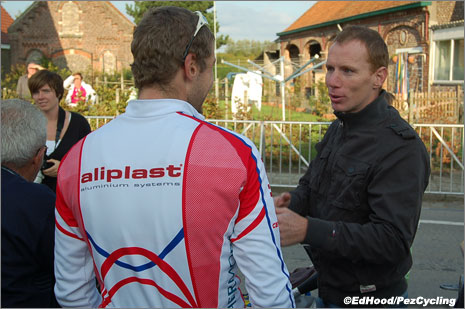 Mario chats to Bagdonas; ‘the legs not so good, today.’ 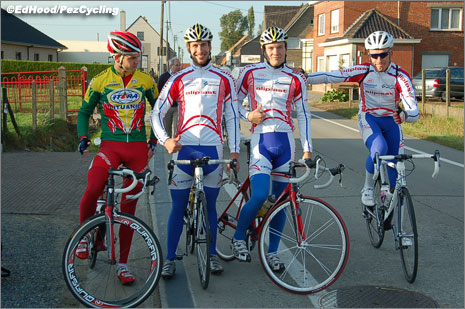 The Lithuanians pose for a shot and then pedal off to Evergem.

It just remained for us congratulate our fellow barrier hanger on predicting the top three with a quarter of the race still to go.

We headed off in search of frites – the only thing missing from an otherwise perfect afternoon. 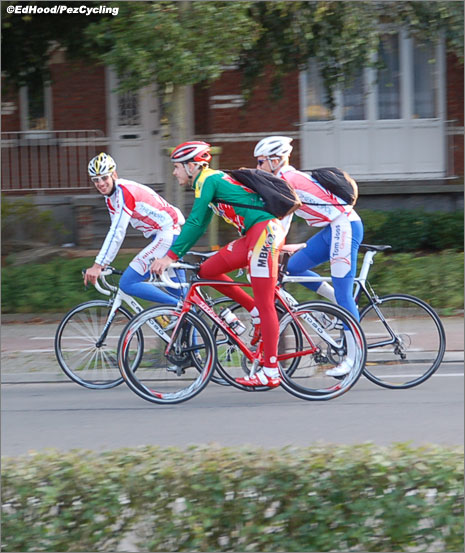 As we parked up at the frites stand, the Lithuanians pedalled by.

No frites for them – maybe a big salad and a slab of blue steak.