Cav has settled another ghost, it was 1967 when Tom Simpson last won the world championships for Great Britain. In Copenhagen last autumn the Manx man became the second Briton to don the rainbow jersey. But it was way back in 1959 when Ireland’s Seamus Elliott became the first and only rider from the British Isles to win Kuurne-Brussels-Kuurne – until Sunday, that is.

Cav is in a different class from the other fast men – it’s as if he has another gear.

His team were outstanding – Dowsett and Hunt in particular – but Cav tackled the bergs with aplomb, kept out of the wind on the long, flat run in and when it was time to ‘launch’ it was clear from the first half dozen pedal thrusts there would be only one winner. 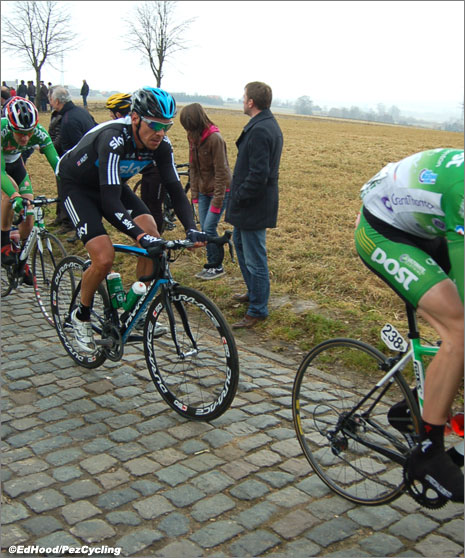 We had a ‘private screening’ of the finale in l’Escale bar in Ronse – our usual hang out for the last hour.

When we arrived there was football on the TV and major dissent from the guys at the bar when Kuurne-Brussels-Kuurne was mentioned.

Our host ushered us through to the back room, where among the empty beer crates stood a magnificent plasma screen TV – result ! 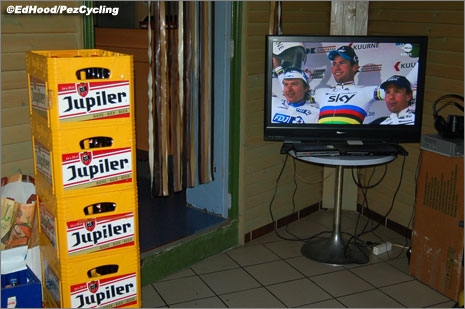 The papers had the race as a straight Cav (nicknames ‘Manx Express’ and ‘Manx Missile’) v. Greipel (‘Gorilla’ and ‘Gringo’) shoot out.

They had a great stats panel, as well as nicknames, we got:

Kuurne-Brussels-Kuurne is a much more egalitarian affair than the ‘new improved’ Het Nieuwsblad.

It’s not marketed as one of the ‘Flanders Classics’ package and the buses park up on the main street.

It’s ideal for wandering sad old race fans like us. 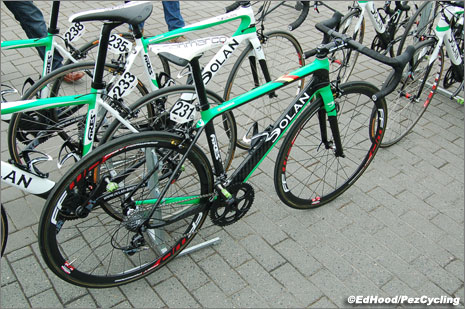 The first bike we looked at would play a significant part in the day’s action – Niko Eeckhout’s Dolan.

It carries understated red, yellow and black flashes, in honour of the day in Antwerp a few years back when ‘Rambo’ out sprinted Boonen and Gilbert to win the Belgian elite championship. 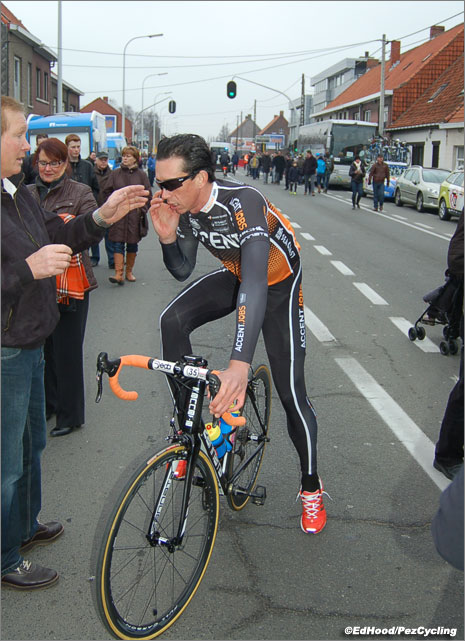 Leif Hoste may have gone from Pro Tour to Pro Continental, but he still looks the part and is very popular with the fans.

Vini Farnese were here – but it was a case of ‘going through the motions’ for the Italians. 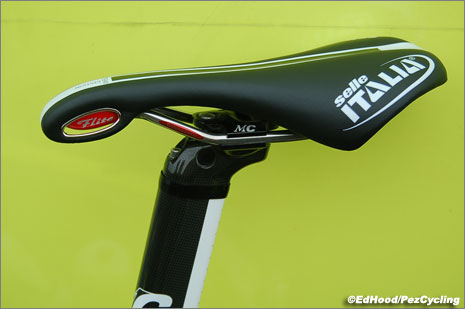 We liked the saddle clamp on the integrated seat posts of their Cipollinis – one of the neatest we’ve seen. 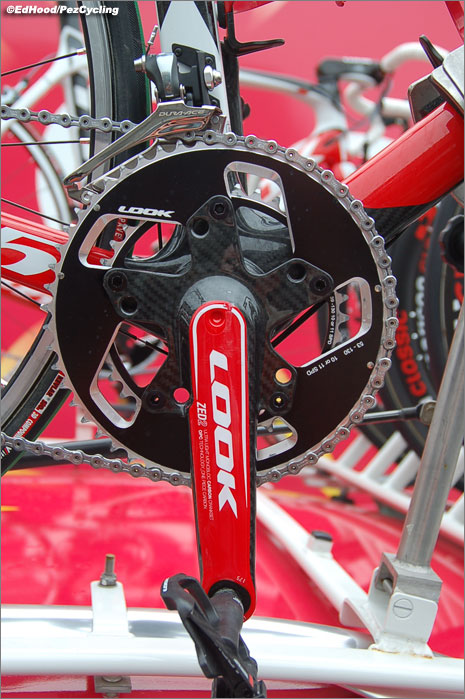 Look have always been innovators, and their new crankset – said to be the stiffest on the market – continues the trend. 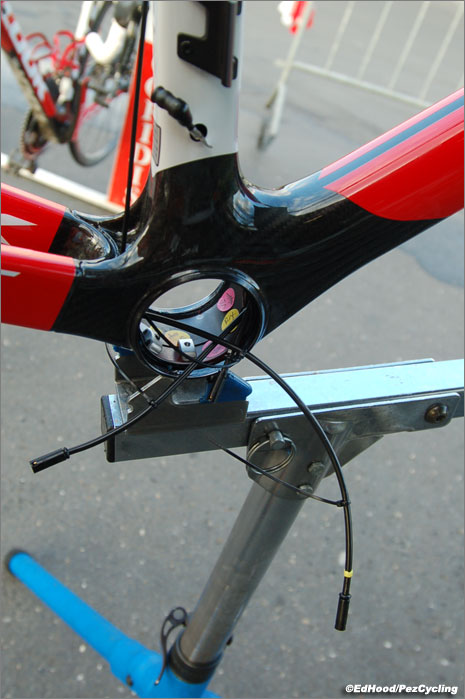 Nice wiring for the Di2 setup.

But if you do buy a Look, it seems they come with wiring diagrams, now . . . 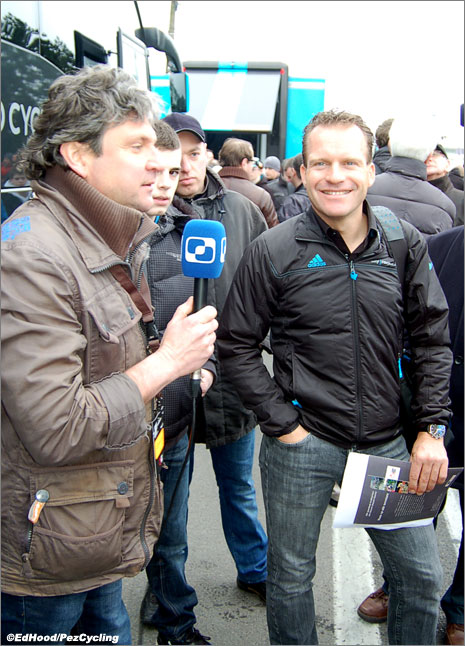 Down at the Sky bus, two time KBK winner and Cav’s boss for the day, Steven de Jongh was in much demand. 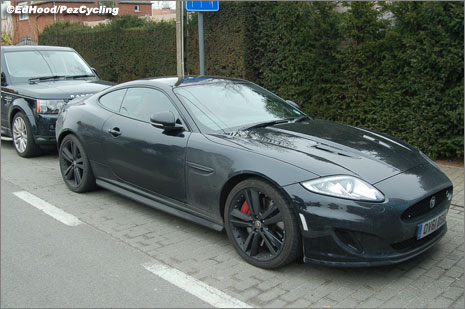 But impressive as the Sky bus is, we were more impressed with Alex Dowsett’s Jaguar – it looks like it has the sports suspension, brakes, wheels and rims package to us. 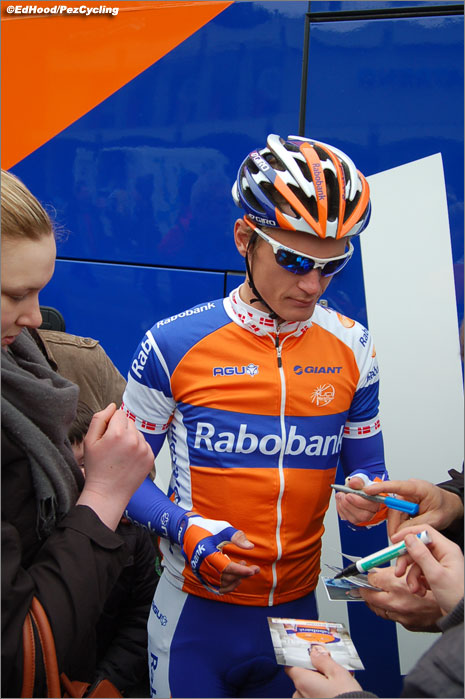 Matti Breschel was much in demand outside the Rabobank bus with the frenzying autograph hunters.

After his ride on Saturday it’s obvious he’s on the way back after a horrible 2011. 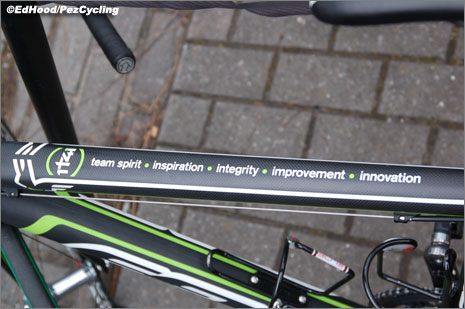 Over at 1t4i we weren’t sure if those top tube legends were what you’d want to be reading as you chewed on your stem on one of the ‘kasseien’ sectors. 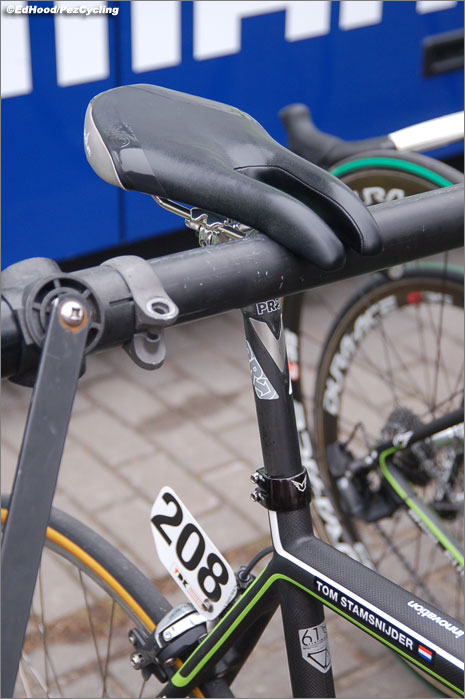 And what about that saddle Tom Stamsnijder was riding ?

Our first stop was the Edelare Top, which is the long, straight, well surfaced climb which carries the main road to Brakel from Oudenaarde up on to the ridge of the Flemish Ardennes.

Usually it’s gutter to gutter up here, but not today. 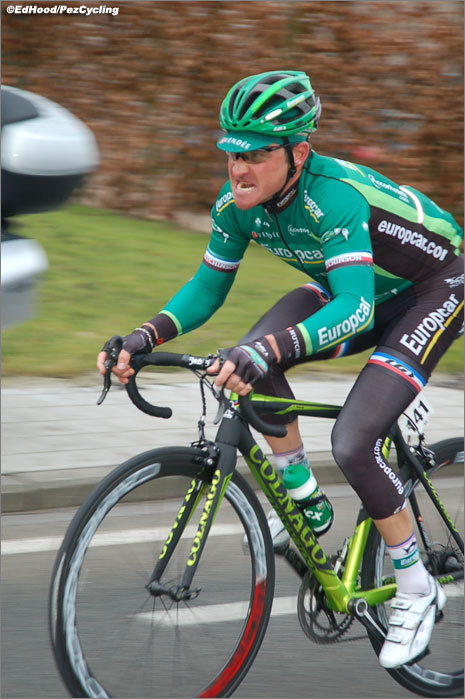 Tommy Voeckler’s jaw was jutting as he tried to make daylight at the front of a long, long string.

After around 30 minutes in the saddle, there were already grimaces aplenty.

On the way to Kluis and a ‘klein’ frites – that’s small, we couldn’t face a ‘groeten,’ which is large, but sometimes enormous – we passed a QuickStep out training. 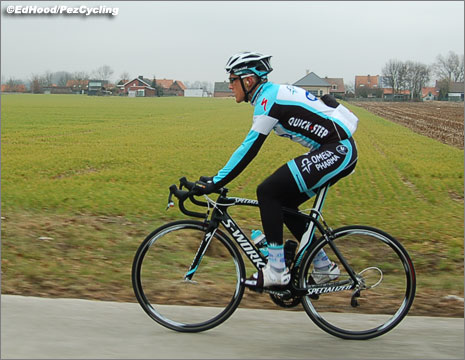 He was floating along at a lazy 40 kph with plenty of time to give us a nod.

The race is difficult to see more than a few times, due to the elongated loop which it describes. 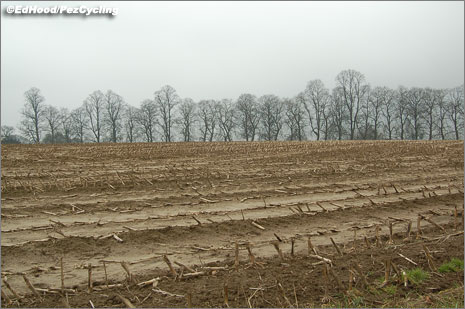 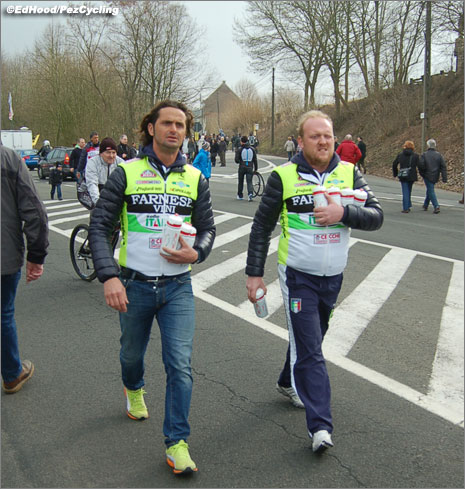 But a good spot is at the top of the Oude Kwaremont, the riders loop round by Ronse after the climb and this gives enough time for you take a brisk walk to the top of the Cote de Trieu which is their next ramp up onto the ridge. 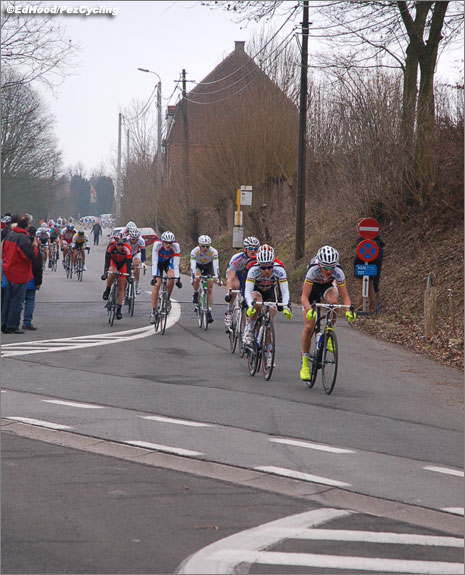 And we had time to watch the juniors in their version of KBK spin past on their restricted gears – maybe the next Sep Vanmarcke was in that peloton ? 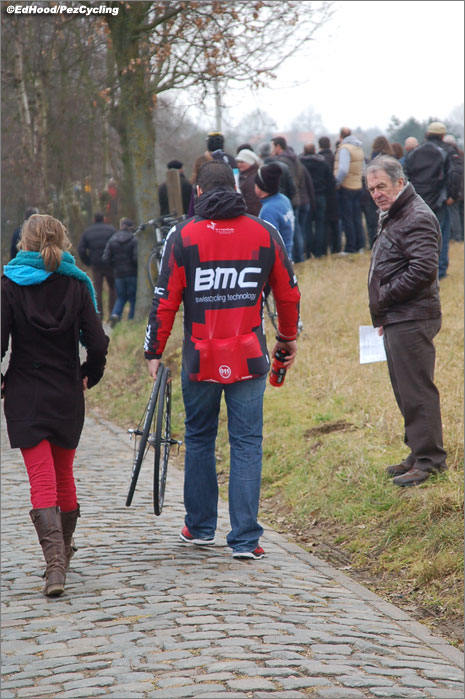 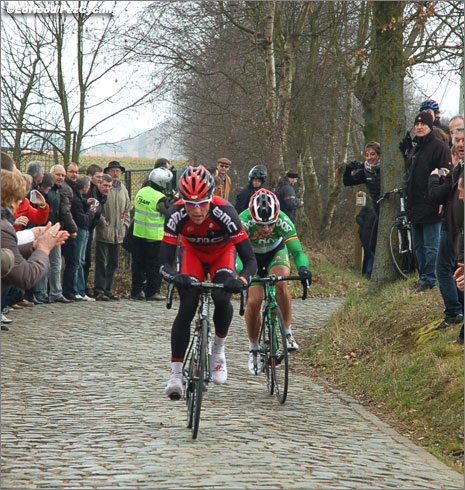 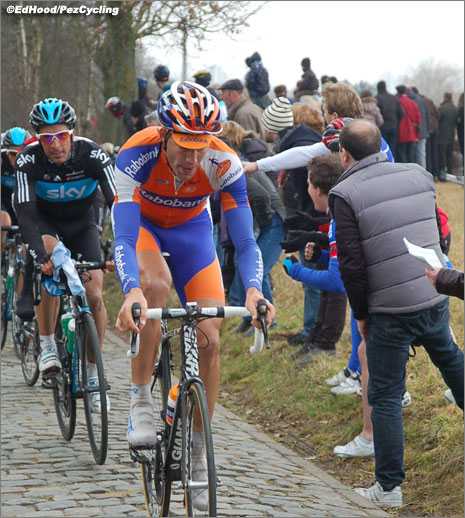 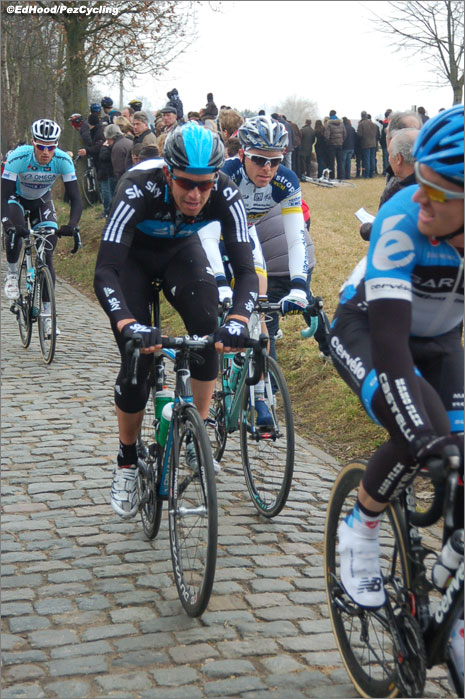 On the cobbles of the Kwaremont there was a break well clear with that man Rambo right there.

The Boonen inspired lead group was around one minute back with the peloton a long, long gasping, clattering and banging line. 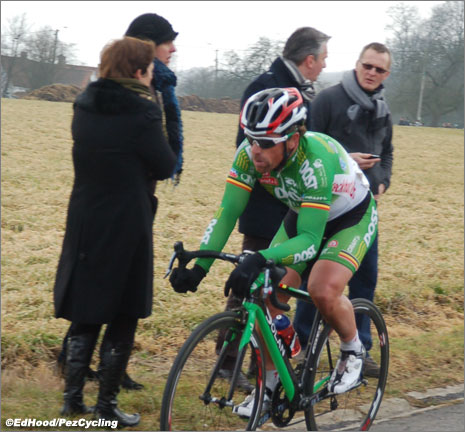 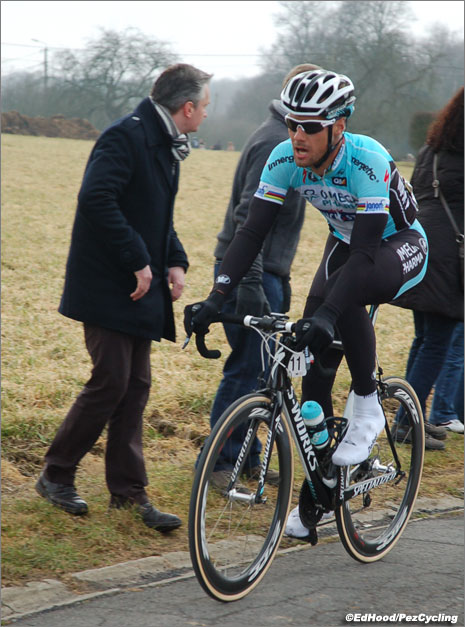 By the time we got to the top of the Cote de Trieu, Boonen had bludgeoned his way through to the front but hadn’t quite caught Eeckhout.

There was little chance of a Boonen win on Sunday – not with the Sky, Lotto and Rabobank trains there for Cav, Greipel and Renshaw – but KBK is a vital part of his preparation for the Ronde and Roubaix.

Over the weekend he put in just under 400 K of racing at an average speed well over 40 kph, including all those hellingen.

After we’d seen them blast past we headed for Ronse and our bar. 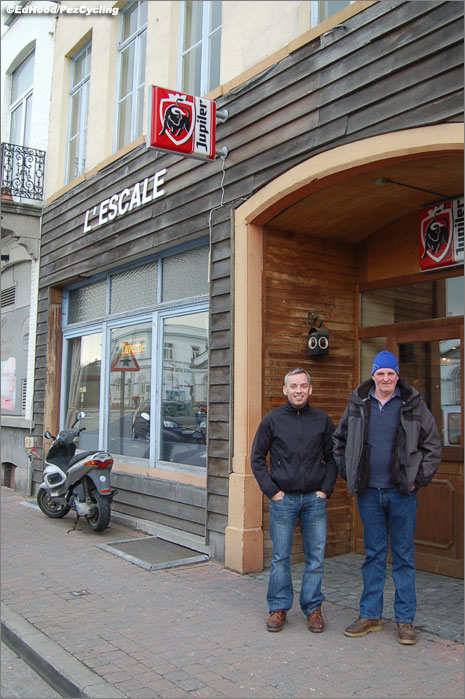 Duly settled in the back room with our Jupilers and plasma screen it was time to watch the last 58 K.

Due to the nature of the parcours – the long, flat haul to the finish from the last climb, it’s unusual for a break to ‘stick.’

In the last hour a group went clear including the irrepressible Eeckhout with Chavanel, Mol, Kuchinsky, Ghyselinck and Delfosse.

But Sky committed early with Dowsett and Hunt in particular doing huge spells to keep the gap just on the minute.

On the two finishing circuits the escapees were rounded up and it was always going to be bunch sprint.

Sky received little help from Lotto, but Greipel was well back at the line, anyway.

Cav was fulsome in his praise for his team, saying that they made it easy for him – we did notice.

Next for him is Tirreno and then his dream of winning the Primavera in the rainbow jersey.

I wouldn’t bet against it.

For us it was Oudenaarde and a Coke with Jered and Ashley; back to Gent for a pizza; a last three Westmalles at the Vivaldi before a reasonably early night and then the battle with the Brussels commuters on Monday morning, en route the airport at Charleroi and the Ryanair punishment flight home.

But on Monday afternoon I’ll close my eyes for a minute and think about the music of the peloton on the cobbles – that’ll make me smile.