Roadside Report: We arrived in Europe the day before the Omloop Het Nieuwsblad – the first major classic of the Classics season. Two months later, we were there for one last big day out to draw the Spring Classics season to a close: Liege-Bastogne-Liege. Let’s take a look back at the day that was.

After a great week spent exploring the Ardennes (more on that later), we arrived to the big day – La Doyenne. The morning went smoothly; we arrived to Liege in due course; we even found a legal parking spot. Getting to our credentials proved a humorous task – we needed to get through the barriers to arrive at the press area…to get our press creds. Unfortunately, you were not allowed past two stern policemen without press credentials. After contemplating the amusing situation with looks of incredulity, the policeman resorted to his radio, whereupon garbled noises followed, which resulted in a begrudging nod to us. Why does it always have to be so complicated? 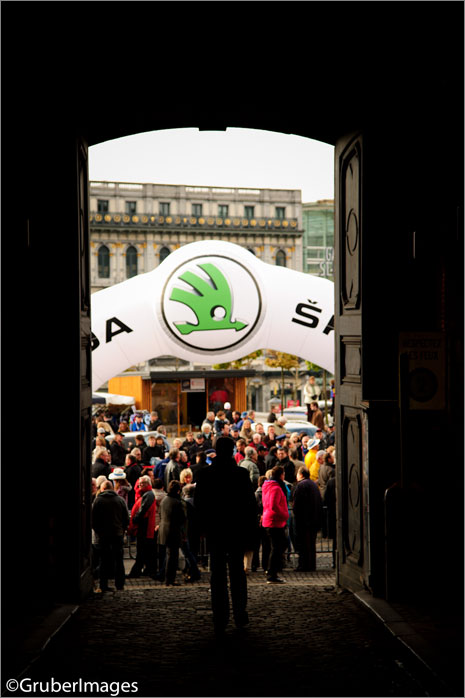 I’m a huge fan of the doorway behind the press area.

We lingered for a little while, watched the people crammed against the barriers, marveled at the amazing collection of cameras in attendance, tried not to knock over any bike riders, and then realized – we’re not big fans of race starts – so we left. If you’re looking for those pre-race starting area shots or pre-race portraits, look elsewhere. 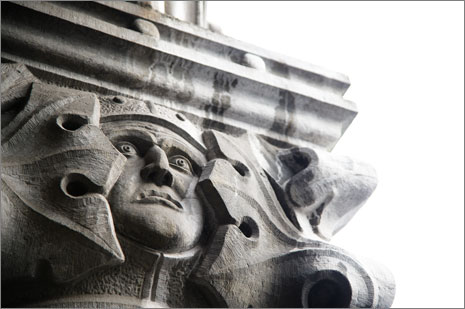 I did take one pre-race portrait before hitting the road…

Out on the road, in search of our first stop, we settled upon a beautiful little forest just outside of Remouchamps – Philippe Gilbert’s home and the town which La Redoute keeps watch over. At this point in the race, barely thirty minutes in, La Redoute is just another little note on the stems of many of the riders though. 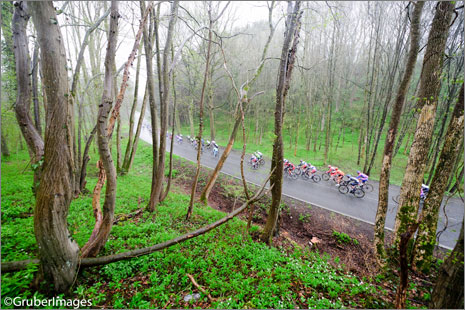 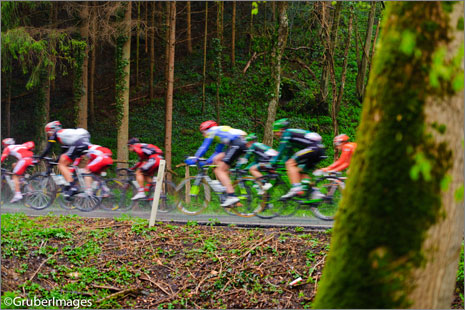 Ashley and I separated to our respective spots – I clomped high into the wet forest, while she crouched low in the grass next to the road. As we waited, the sky elected to do what it did a lot of that week – rain. When rain wasn’t enough, the hail came, and with the hail, came the race. 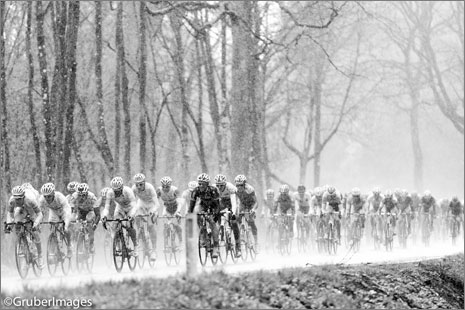 I’ve never seen anything like that before. The section through the forest was on a slight downhill, and the attacks were coming from every direction at the front. At the back, however, the aims were different – scores of riders were back at their respective team cars looking for rain jackets…and once in possession of their rain jackets – struggling with them. 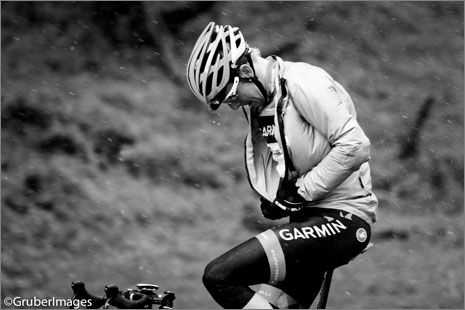 Once the race passed, we ran back to the car as quickly as possible – not because we were in a hurry to get to the next spot, but because the hail was, well, hail. Unfortunately for Ashley, she was closer to the car and a faster runner than I am…so she had a miserable wait while I made my way to the car with the keys. Oops.

Back on the road, we added a new spot to our race chase for 2012 – the Cote de La Roche en Ardenne. It’s a nice climb, but without too much in the way of dramatic views. We parked near the top across the road from an unfortunate car that had gotten stuck in the roadside mud. The crowd watched the car’s tires struggling in the goop and after a suitable amount of time had passed, about a dozen helpfuls came to the rescue. It took some doing, but the car managed to get free just ahead of the race. 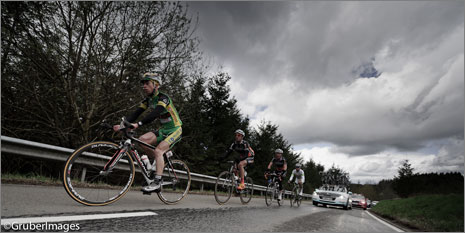 Oh, the drama you encounter chasing a race…

Once again, Ashley and I parted ways. I headed into the forest, she went up the road. 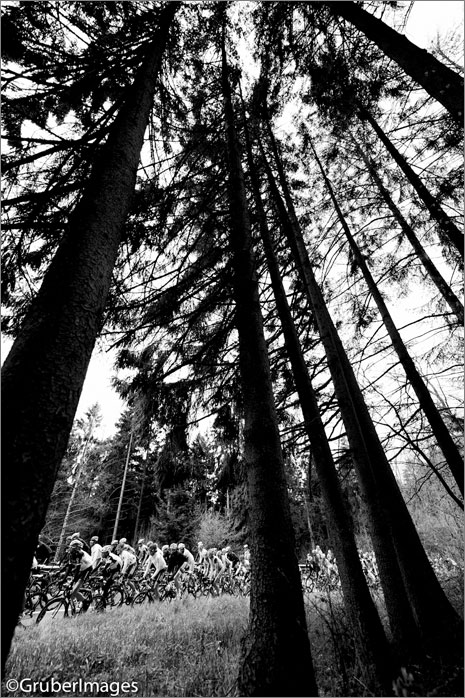 I got a couple of nice shots, but Ashley took what might have been the picture of the spring. Bless her for this one. 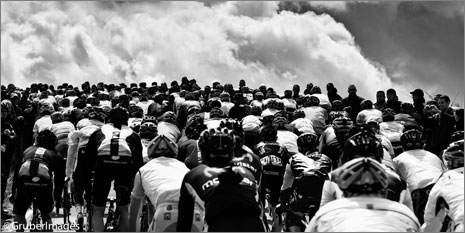 Back in the car, we crested the climb and realized that we had made a mistake in picking our spot. We now know just where we want to go next year.

Next on the docket was the climb we’ve all seen a thousand times in pictures, but just can’t quite help ourselves from going back – the Cote de St. Roch. 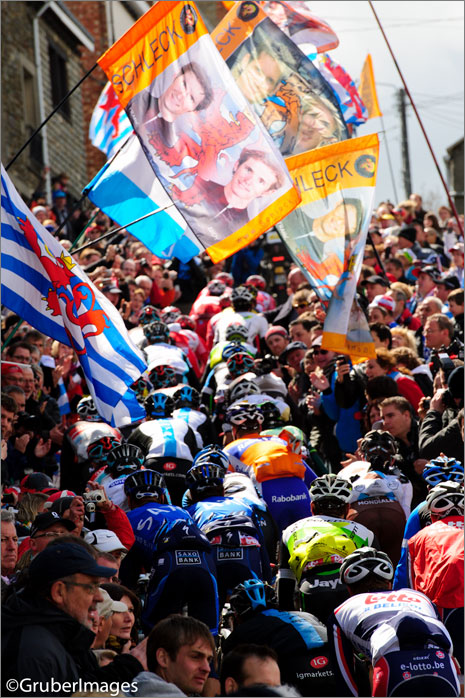 It’s one of those places where you know you’re just one of a thousand other clicking cameras, but it’s just such a great climb with such an awesome atmosphere, there’s no avoiding it… 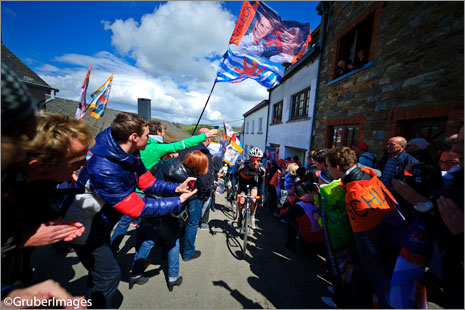 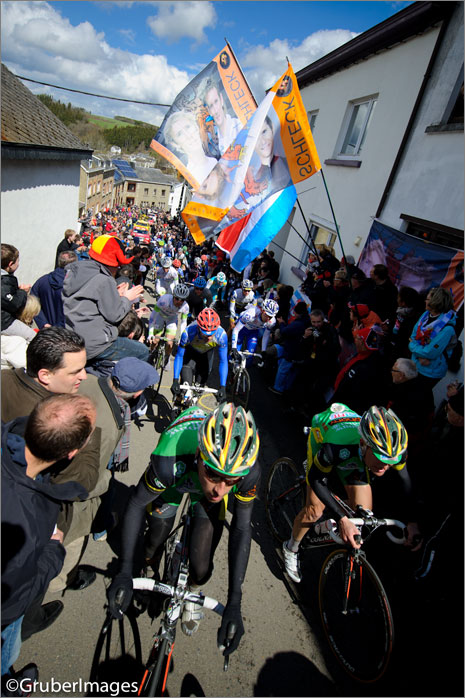 Wildly random shot from above.

It makes for entertaining pictures, but one shouldn’t forget – this is objectively one of the hardest climbs of Liege-Bastogne-Liege. Unfortunately for the climb, it will always be known for its looks and not its brawn, because it’s such an early ascent. 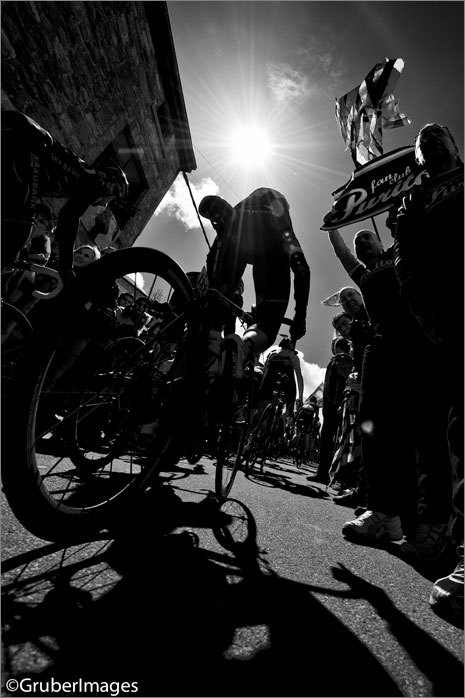 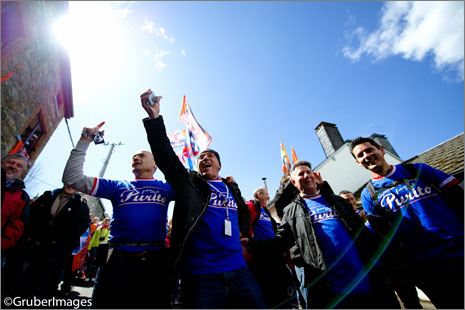 If you ever find yourself in the Ardennes on a Sunday late in April, do yourself a favor and check out the scene on the St. Roch. It’s not only an iconic image, it’s a pretty fun party in a great town – Houffalize.

Back in the car, which we had parked quite illegally, but just right for a race day, we headed off to familiar roads around Stavelot. There are a lot of options for the part of the race, and while we’re big fans of the fun on the notoriously steep, Cote de Stockeu, we thought we’d change things up a bit and shoot for the Cote de Wanne and the Col du Rosier. I love both climbs, and I have a hard time not going with my riding preferences when it comes to chasing races. 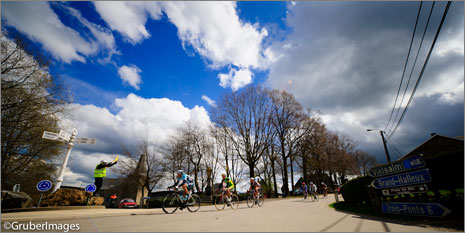 The break rolls through the town of Wanne, en route to Stavelot and the difficult ascent of the Cote de Stockeu.

Unfortunately, it was time for me to finally learn a lesson – my favorite climbs to ride aren’t necessarily the best climbs to shoot – unless you can get to that special spot that you love so much while riding. In the case of both the Wanne and Rosier, we weren’t able to get to those spots, so we ended up with two spots that were more or less, meh. 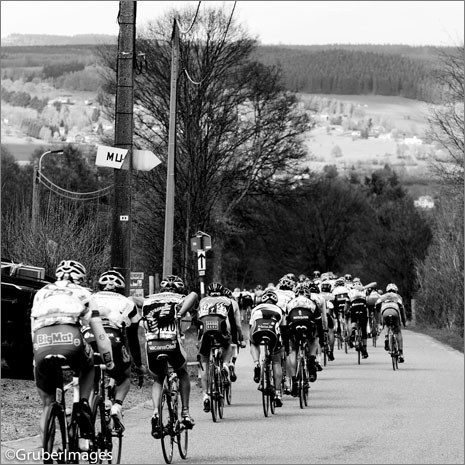 The peloton begins the descent into Stavelot.

It also highlighted a fact that needed underlining – more spots aren’t always better. We got to heaps of spots at this year’s Ronde van Vlaanderen, but looking back, I have to admit, they weren’t necessarily worth it in terms of the pictures. Sure, it was great to see the race more, but at this point, when we chase a race, we’re looking for a special picture. It’s hard not to get caught up in the numbers game of – how many spots did you go to? Looking back, we would have been better served to find a good spot on the Cote de Wanne instead of a concessionary spot in the town of Wanne as well as another ok spot at the top of the Rosier. 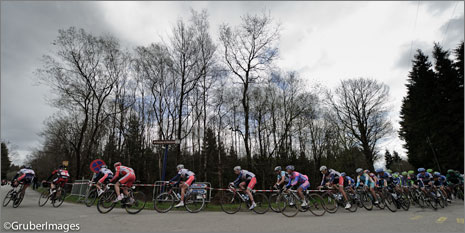 It seems like the top of the Rosier, but it’s not quite – there are still a few more painful vertical meters that need taking care of.

Ah! But is it really so bad?! We were out on some of our favorite roads, chasing a beautiful race on a brilliantly crazy weather day. We had some good snacks in the car, our car was working fine, even the policemen were cooperating for the most part. Overall, we were feeling pretty good, and with that good feeling, meant another change in plans – we were going all in for our first try on the Cote de la Redoute.

Le Redoute is a beast, a menace of a climb. It’s also quite beautiful once you get past the large, busy motorway from whence it climbs from.

It’s also the sight of the OTHER major party of Liege-Bastogne-Liege. The party on the St. Roch paled in comparison to the one on La Redoute, perhaps that’s because of the fact that revelers have an extra few hours to imbibe a few more liters of the their favorite brew. I’m assuming Jupiler in this case. It’s the beer of the Belgian roadside cycling fan! 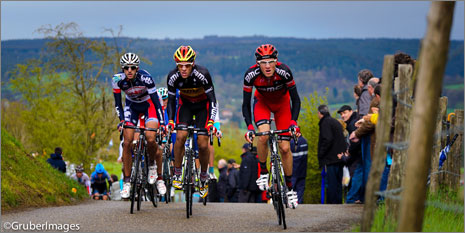 On La Redoute, we had one of our more memorable occasions in a car – a group of fans, seventeen beers too many for all of them, had blocked the road, stopped us, surrounded the car, and began rocking it back and forth. If you know how bad our suspension is, this was a most troubling situation, so we did like any good motorist would do and attempted to run over them. They got out of the way.

I’m kidding. I didn’t TRY to run over them, but I did start driving forward, and they did move out of the way. 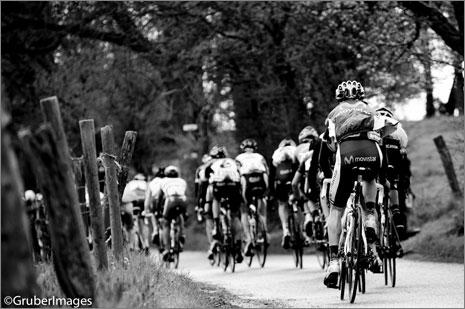 La Redoute is famous for its steep part, but the last couple hundred meters to the true top aren’t to be laughed at.

We got a sweet parking spot next to a sausage vendor most of the way up the climb. I hopped out, handed over four euros, and before Ashley was even out of the car, we were two sausages heavier. Perfect.

The race came soon after.

Ashley huddled in the midst of the eight million other fans and photographers, while I headed for the quiet part of the climb, which is actually the top of it.

While waiting for the approaching race, she who must not be named for fear of saying her name too many times had another photographer walk in front of her. As in, right in front of her. You know those laws of nature where two objects can’t occupy the same space? The other photographer apparently hadn’t heard of that. So, Ashley, being the mule that she is, picked up, moved around him, and sat right back down in front of the offending clicker. 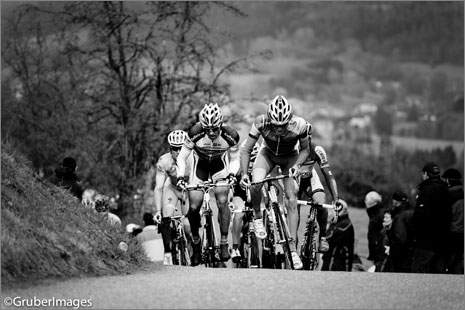 Who knew taking pictures could be such a feisty business.

So the race came, the drama of the photographer positioning battle subsided just long enough to press madly on the shutter buttons, and as is often the case on La Redoute, nothing really happened. The rotten fruit was jettisoned, legs were further beaten into a pulp, but that was about it.

La Redoute is a great climb, it’s iconic, but it’s not the place where the race is decided – that honor falls to the Cote de la Roche aux Faucons and/or the Cote de St. Nicolas – both of which we didn’t manage to make it to.

Looking back at this race – we made some mistakes – and that makes me happy. It makes me so excited for 2013, because I know there is so much room for improvement. How can that not be encouraging?