You can’t keep a man like Ed Hood away from the races. Every year, as the Belgian opening weekend approaches, the tickets are booked, and he’s there, like clockwork. Let’s take a look back at Ed’s day chasing and watching the Omloop Het Nieuwsblad, or Gent-Gent as the classicists prefer.

Our timing was perfect, we dashed into Cafe de Kraai in Munkzwalm just as the winning three man break passed the 16 kilometres to go mark.

But Tom’s timing in the finale was a wee bit out, his jump didn’t get the gap into that headwind that we’re used to seeing him open, Sep Vanmarcke latched on and stuck. 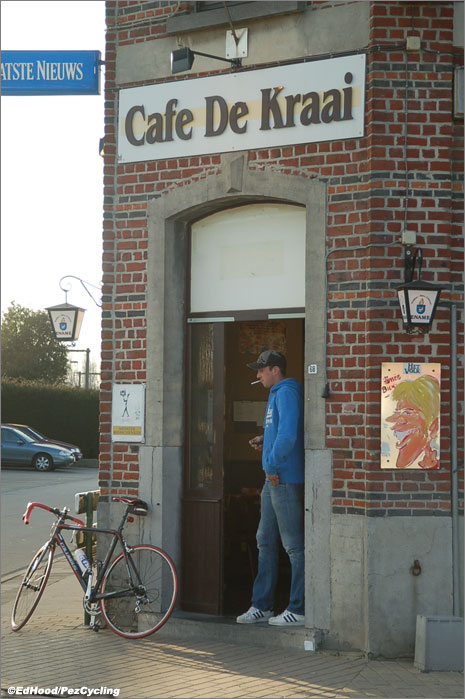 And when Vanmarcke’s kick came, there was little for ‘Tornado Tom’ to do but drop his head between his shoulders and freewheel into second place.

Although we’re supposed to be impartial, we’d have loved to see a Boonen win. 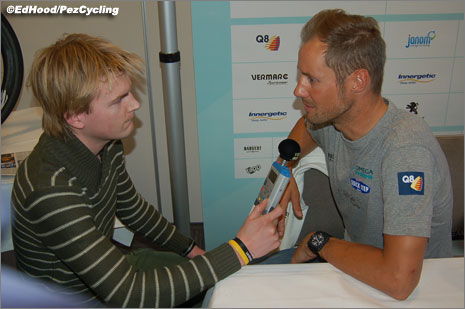 At the QuickStep press conference on Friday in Kortrijk the ‘Tornado’ looked like a million dollars – tall, tanned, chiseled, relaxed.

But 23 year-old Vanmarcke from beautiful Brugge is on the way up and the day of his confirmation had to arrive some time. 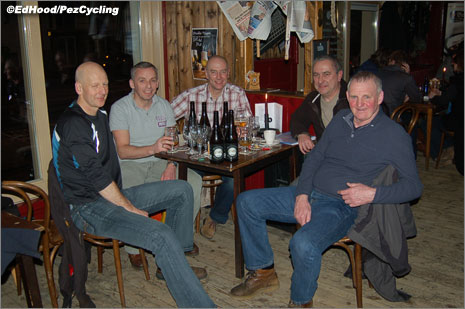 Saturday began for us in De Karper – Iljo Keisse’s dad’s bar – as the clock ticked past midnight on Friday.

We’d agreed to bail out at 01:00 am but those 70’s disco hits kept coming – you can’t walk out on an extended play version of Giorgio Moroder’s ‘Theme from Midnight Express.’

They’ve flattened the station in Gent and our usual paper shop; it was the second filling station before we picked up our paper.

The newspaper, which gives the race its name had Tom Boonen as 5* favourite, Flecha, Chavanel and Van Avermaet on 4* with Hushovd, Breschel and Vansummeren on 3*.

They also had a comparison of Boonen’s 2012 so far to Gilbert’s – Tom has had 19 race days, Phil has had eight.

We also get the ‘race take’ from four riders’ girlfriends, including the ever smiling Lien Crapoen whose face has graced PEZ more than once.

Dave wasn’t smiling too much though, he was even grumpier than usual at 10:00 am as we made our way up to St. Pietersplein and the start area. 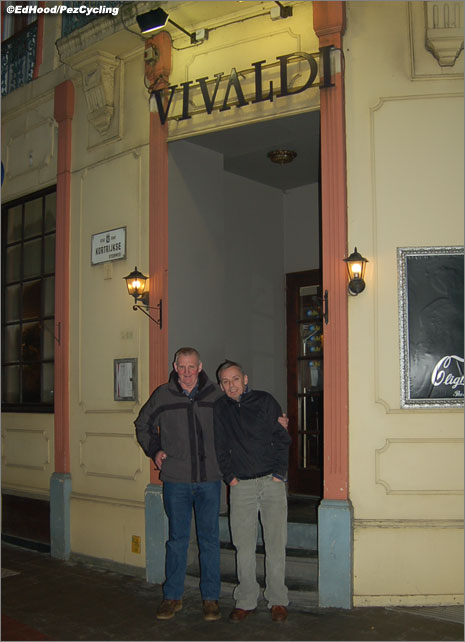 Maybe we shouldn’t have gone to the Vivaldi after De Karper – then the Monopole after the Vivaldi . . . 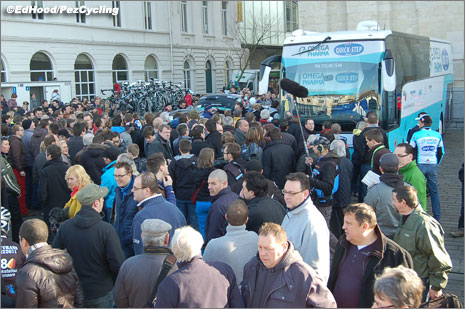 It’s nice to feel the sun on your hung over skin on the morning of Gent-Gent, but it brings the crowds out and it was wall to wall people – especially around the QuickStep bus.

We liked things better in the ‘old days’ when the teams lined up in the street behind the Kuipke track. 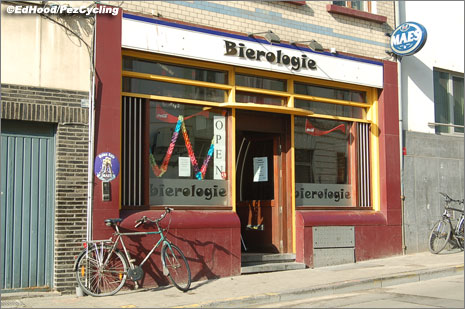 Discretion was the better part of valour for us – all that humanity is hard to cope with before full rehydration has taken place – and we headed off to Wetteren to catch the race early. 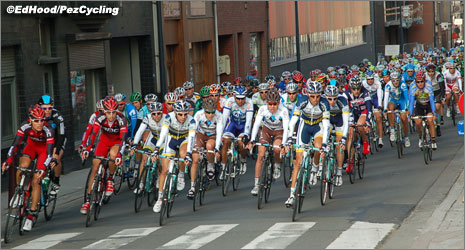 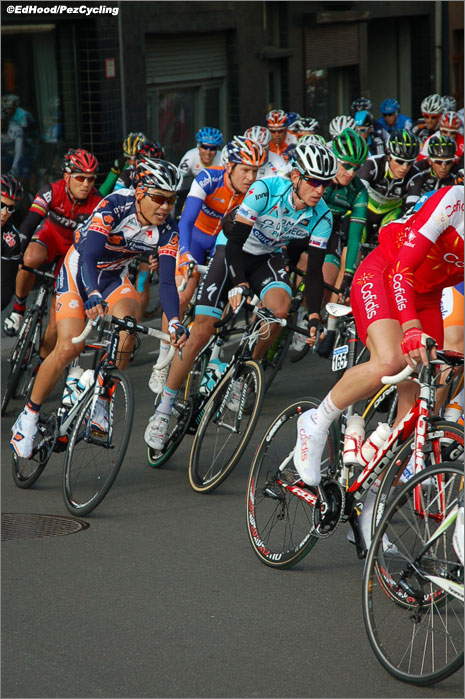 Seven were clear, the race was ahead of schedule but there was no urgency in the huge peloton, enjoying the unusual delight of Flemish sunshine in February. 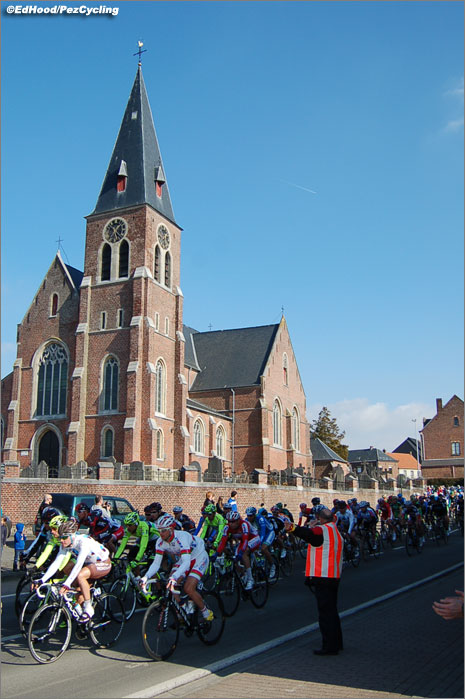 At Strijpen around 90 minutes in, it was compatto as they streamed down past the beautiful village church. 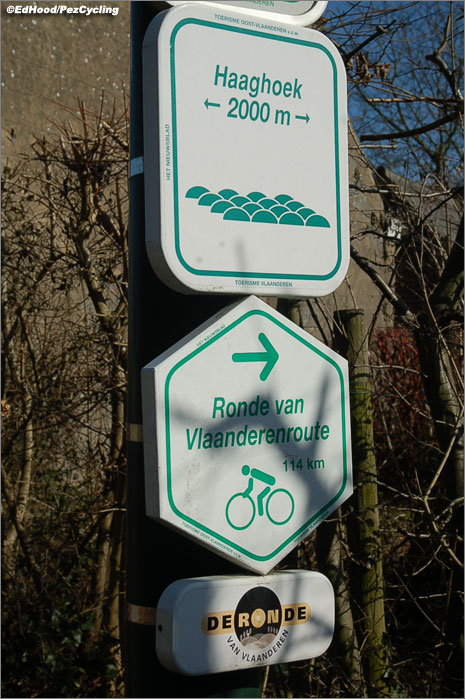 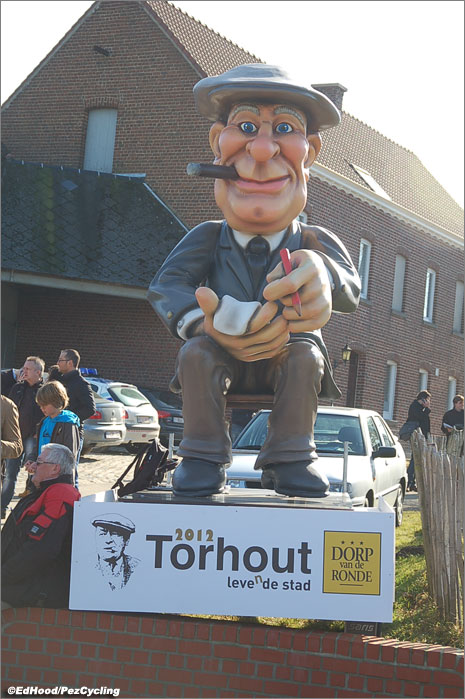 Our next stop was the long switch back of ‘kasseien’ called Haaghoek, recently re-laid so the cobbles are neat and tidy with none jutting out at evil angles like they do on some sectors. 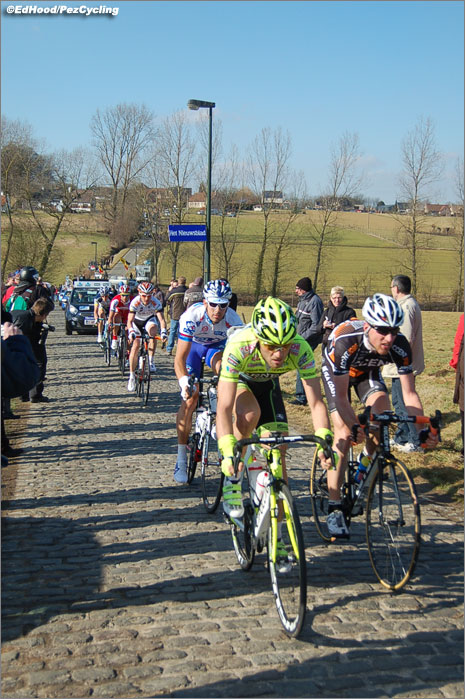 There was a little bit of a tail wind and a break of six or seven streaked past, carbon rims ‘clacking’ and transmissions ‘swishing’ as rear mechs fought to keep chains from bouncing off.

Cofidis, Vacansoleil, F des J and Vini Farnese were all represented; but we knew it was all academic – too early. 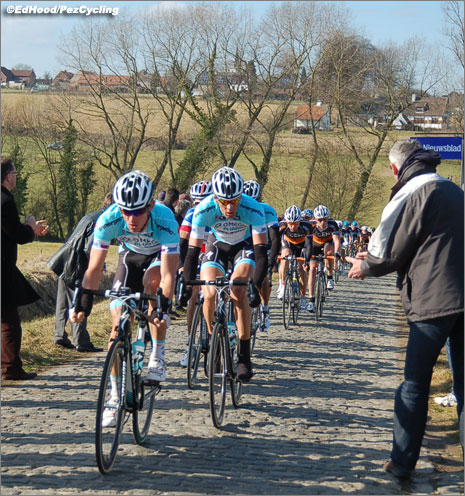 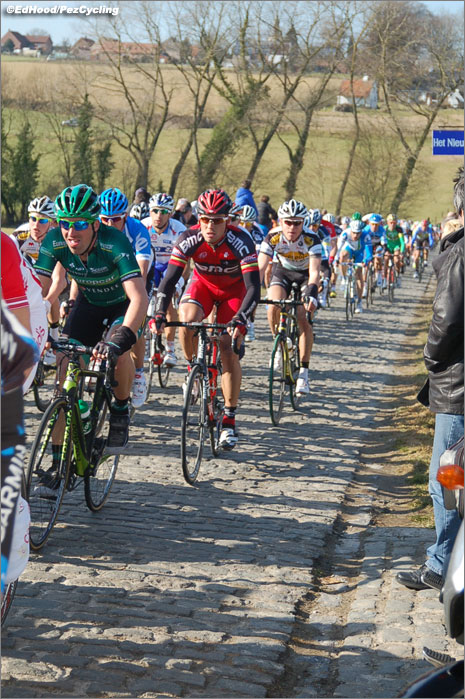 The gap was wearing on for five minutes when the QuickStep driven string hurled itself down Haaghoek and was carried up over the hump by its own momentum.
The noise is beautiful; the carbon rims crack and bang, chains dance their tune and bottles try to rattle out of cages – somehow you don’t notice the noise from the motorbikes, just the rhythm of the peloton on cobbles.

It seemed to take a lot longer to walk out of there than it did walking in. 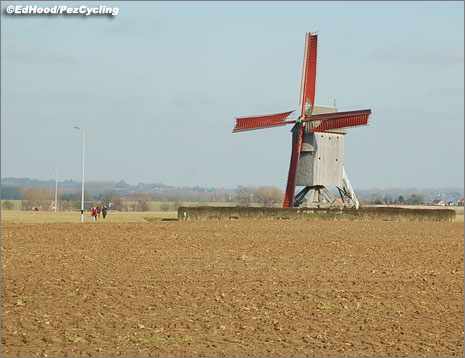 The Molenberg climb was our final spot, cobbled for half of its length with a nasty right hander.

Four hours in to the race; Langeveld was ‘en seule’ in the rain here, last year.

We positioned ourselves just around the right hander at the top on the concrete section road, and bang ! 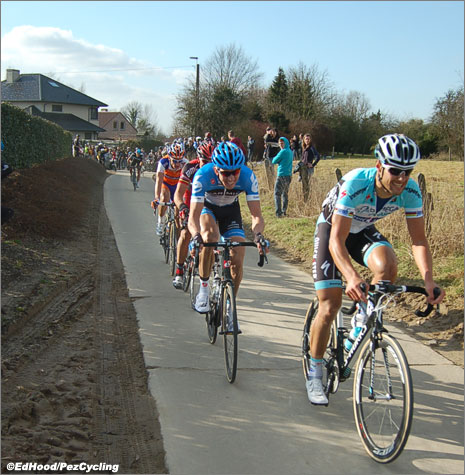 He caught us by surprise and is driving like a demon – Vanmarcke is there, Hushovd too and Breschel.

Flecha is bridging, the pace is straight out of Star Trek – with dust clouds to choke on for those further down the line. 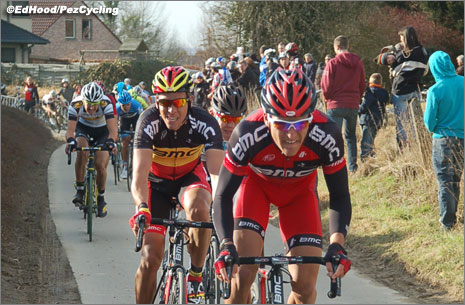 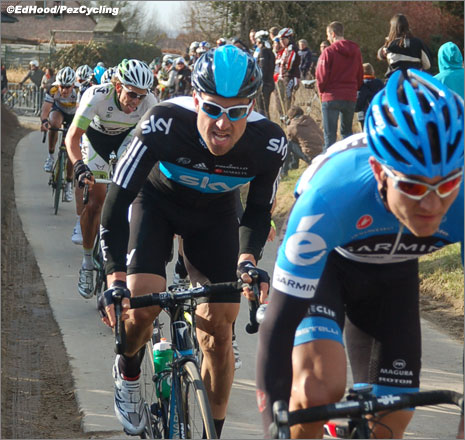 If you’re not in the top dozen, forget it. 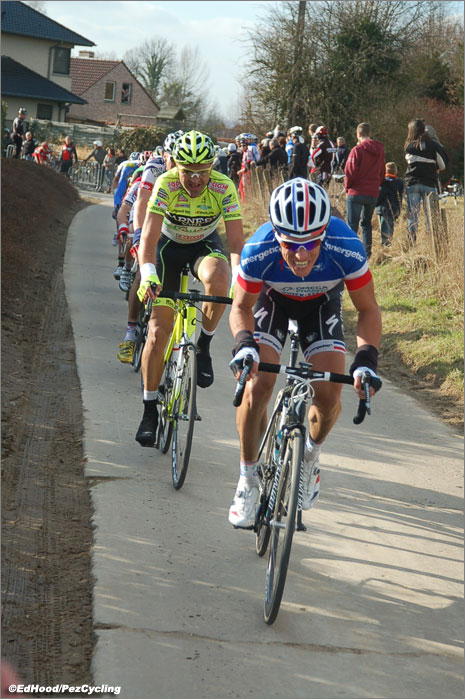 But there’s prize money, placings and UCi points to race for, as well as the podium and further back down the string, brutalised legs have to be commanded to close those gaps. 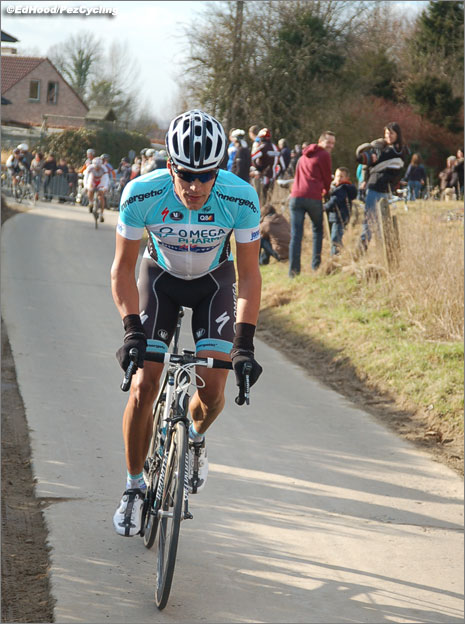 Big Gert Steegmans rides past, job done for the day.

The ‘course open’ car passes and calm descends as we yomp through the fields back to our hire car.

There are 16 K to go when we spot the Cafe de Kraai in Munkzwalm. 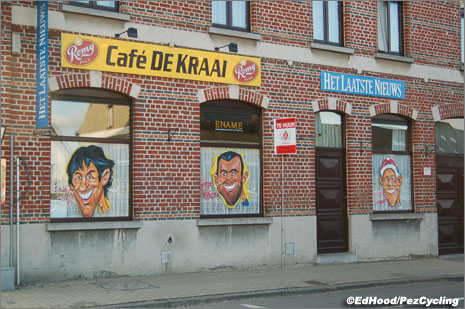 The caricatures of Cancellara and Van Petegem on the windows are a good sign – there’s sure to be a TV. 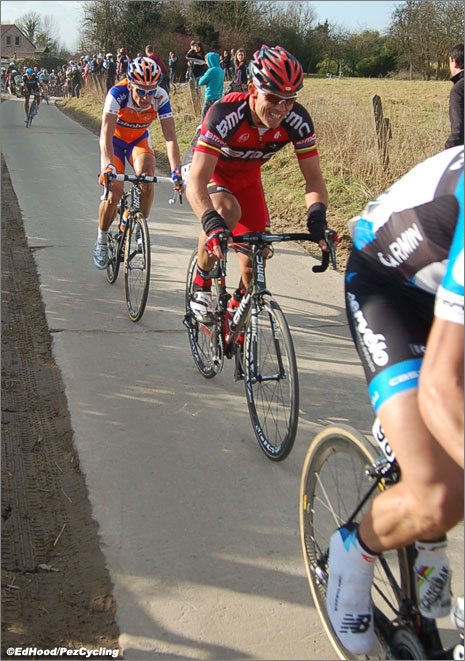 It’s Vanmarcke, Boonen and Flecha – we’d learn later that Scandinavians Hushovd and Breschel got the chop on the final long sector of granite blocks.

You can tell it’s a headwind by the laboured style of the three escapees.

Flecha tries to get away as the line approaches – no chance.

Was it over confidence, impatience or nerves which inspired Tom to jump first – we’ll never know.

For Vanmarcke, it was the day he ‘arrived’ and for Flecha a remarkable third consecutive year on the podium.

‘Can we go to the student cafe and have spaghetti, boys ?