Spanish seaside town, Calpe, on the Costa Blanca, has been a Mecca for professional teams for years. They try places like South Africa, The Canaries, Tuscany, Mallorca, and the States, but if anywhere is the most popular destination, it has to be here and the teams keep coming back. Many riders pay their own way here for extra training and some have bought houses in the area. PEZ joined Quick-Step for a day…

The Quick-Step press officer; Alessandro, suggested I should get there around 10am, as it was going to be an easy day, “Spanish time!” As the riders where not leaving until eleven for a short ride of around 2 hours with a coffee stop (nice work if you can get it), but they have been doing long, hard, mountainous rides since their arrival last week. Tom Boonen likes it here so much he came to Calpe earlier than the others by a few days. 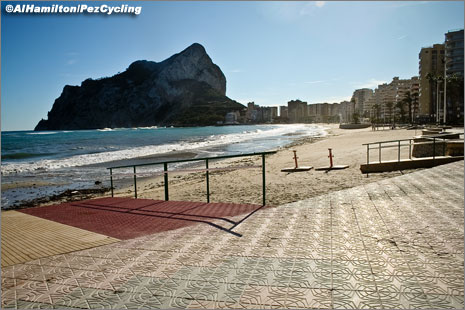 On the subject of “Tommeke” Boonen, he is a very nice chap. OK, I know he has done a couple of stupid things in the past, but he is a superstar in Belgium and could just be a prima donna and ignore anyone that he can’t be bothered with, like some lesser riders do! 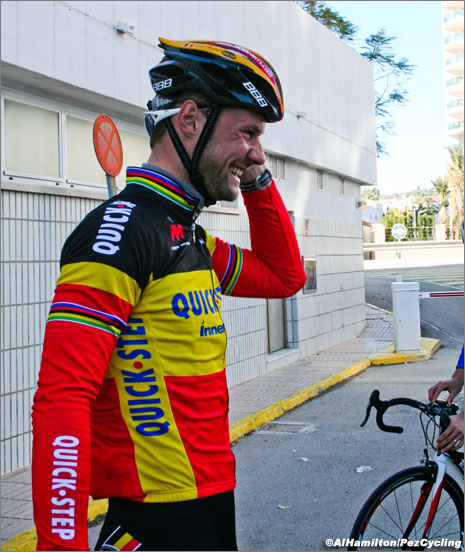 Tom has time for everyone, after a TV interview in the hotel an old Belgian guy (who looked like a stalker) cornered Tom on his way to get changed for the ride. This old boy had a long winded story, but Tom took it in stride making all the right noises, and the man went home happy. 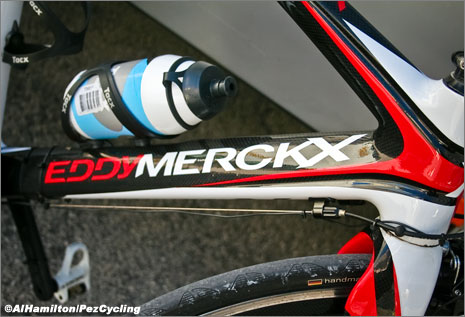 Eddy Merckx and QuickStep – a match made in heaven.

I found the same when I asked Tom about the new Eddy Merckx bikes. I expected the usual “it’s the best bike I’ve ever had etc.” but Tom wanted to tell me all about it. 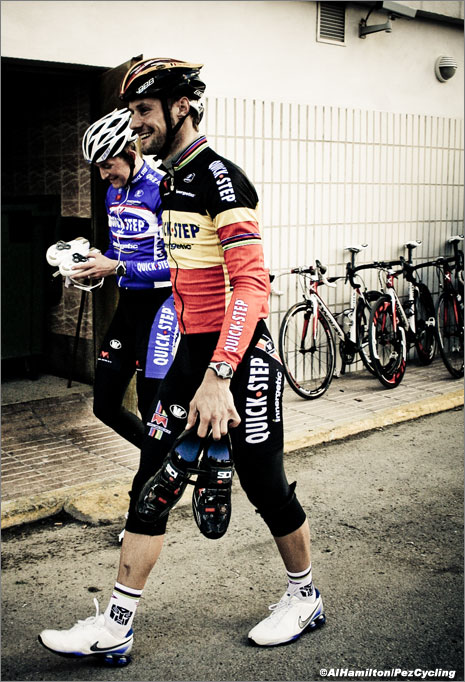 “Merckx Bikes are really a new company as it was a complete take over. They have managed so much in just a month”. What about the special size of frame that Tom needs? “Well, first they made me an alloy frame to my specifications, and then after I had ridden it and was happy, they made me a carbon version. I ride a 57cm seat tube with a 59.5 top tube, so it’s a long bike; it also has extra strengthening at the head tube”. 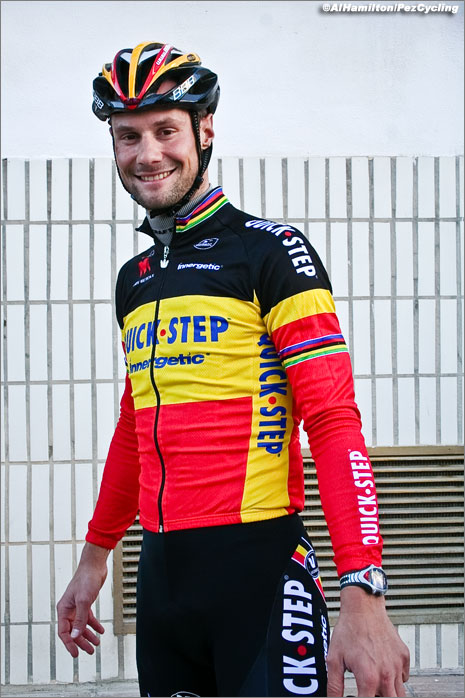 What about Paris-Roubaix? “This one is for normal roads; they are making a special for Roubaix”. And you for Roubaix? “Yea, I hope to be good!” Roubaix and Flanders? “I hope! That would be really good!” 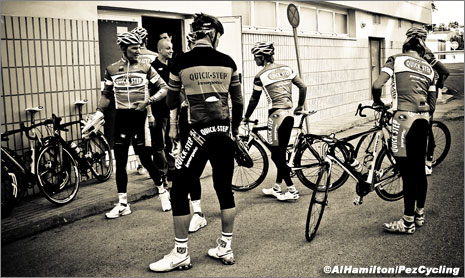 The team were on an easy day of around two hours; out of Calpe and up the steady climb to Benisa, then back to the coast to one of my favourite coffee stops in Moraira, then home. Not a long ride, but a very nice one. 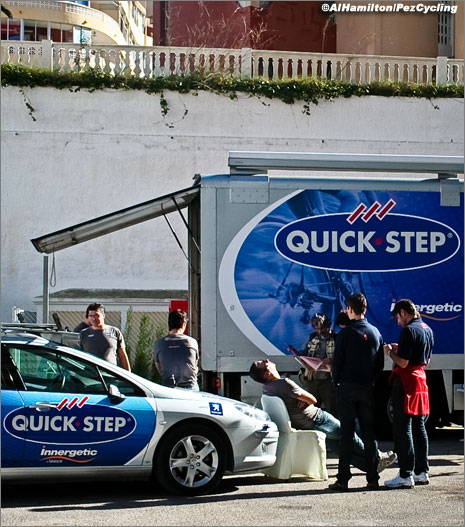 The mechanic’s job is highlighted by periods of absolutely nada…

I left them to it and went to look for the other teams based in Calpe. I had spotted the smaller Belgian team; Topsport, earlier, they were split into two groups of around twelve riders each and must have been on a big ride. Topsport were round the corner in the Hotel Diamante Beach and luckily Katusha and Astana are also here, but, as I discovered, I couldn’t be in two places at the same time: looking for Alberto Contador was going to be tricky. 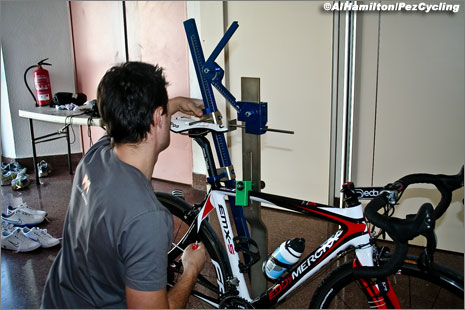 …And of course, these periods are followed by work, lots of it.

First of the Quick-Step riders back was Frenchman Jerome Pineau who was having a saddle problem and wanted to try a different one. The mechanic got to it as there was nothing else to do with all the team still having coffee. 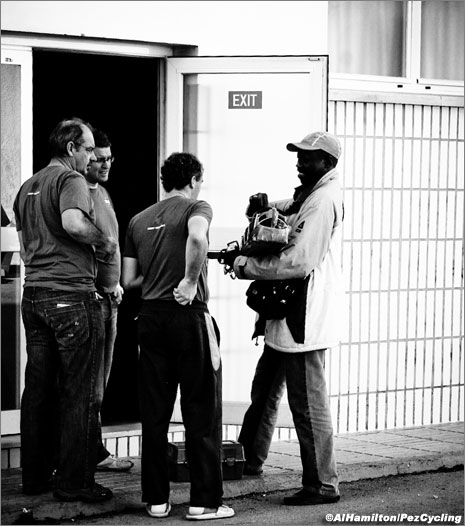 Watch? Wallet? How much?

A group of Italians were next to arrive; Dario Cataldo, Marco Velo, and Matteo Tossatto amongst them, but it was a long wait for the others, not extra kilometres, but extra coffee down at the beach. As we waited, a street seller tried his best with the copy sunglasses, watches, and CD’s with the mechanics and masseurs. 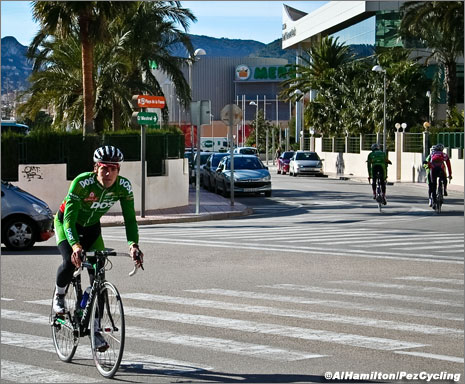 Pro teams big and small are hard at work in Calpe.

While I was waiting some of the Belgian registered, Irish team AN Post passed on their way to a smaller hotel round the corner. Stijn Devolder rolled in looking well. How’s the form, Stijn? “Its coming” and for Flanders? “Yea, great by then!” 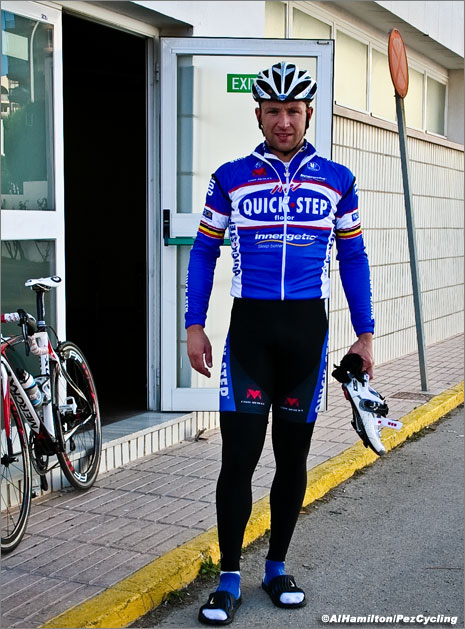 Stijn Devolder: looking to pull off an incredible three in a row at De Ronde.

After a few hours, the Boonen group returned. As you would expect Tom was first, it wasn’t much of a sprint but then there was nothing important to prove. The riders disappeared back into the hotel, work done for the day, except Tom had left his clean washing behind to be rescued by Kevin Hulsmans. 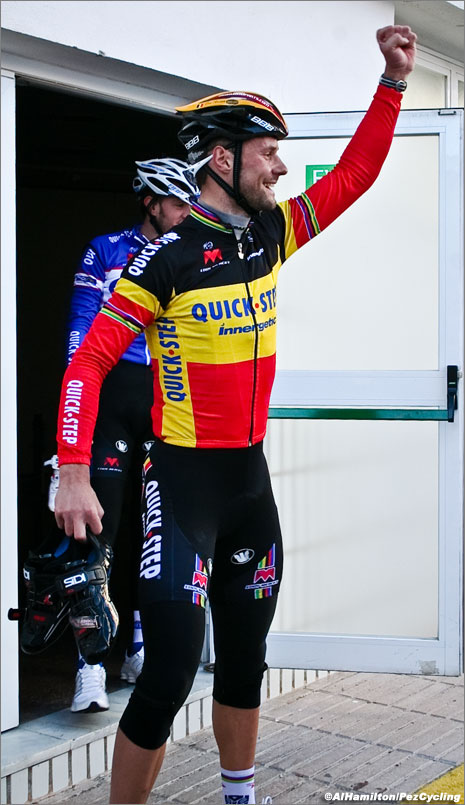 A fist in the air for first back, Tommeke. 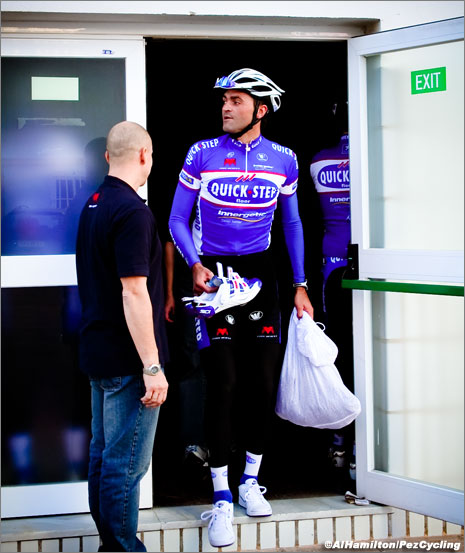 Tom was a bit too happy with his feat and forgot his laundry. Kevin Hulsmans grabbed it for him though. 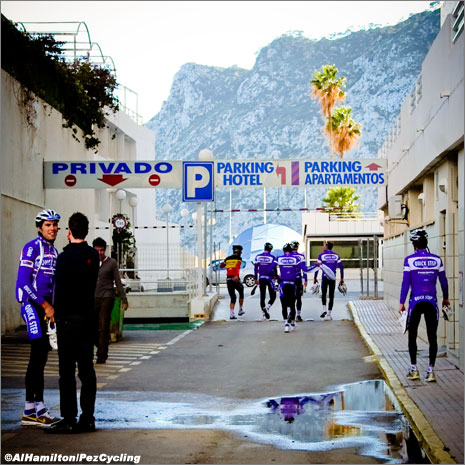 The QuickStep team heads off to a shower – another day in the books. 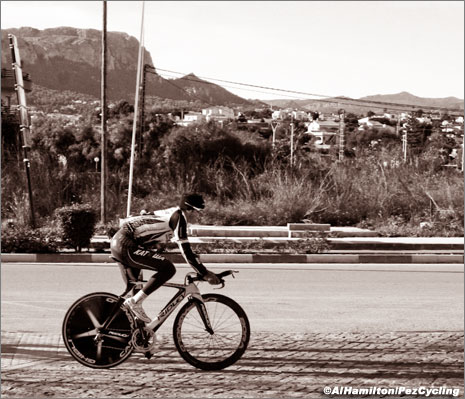 The Katusha boys enjoyed some time on their time trial bikes.

With work done at the Quick-Step camp, I ran round to see if I could find any action at the other hotel. Katusha had also been on an easy day and some of the riders were testing their time trial bikes, but the mechanics had shut up shop for the day. 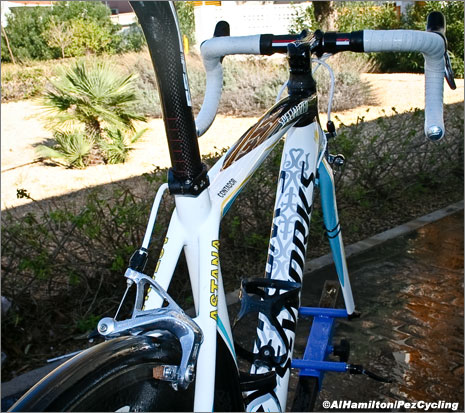 Alberto Contador will be enjoying a Specialized in 2010…and beyond.

I had hoped to catch Alberto Contador, it wasn’t to be as the bikes were all lined up and I had missed the riders by seconds. As is normal the team leader’s bike was first to be washed as the others lay in the hotel basement with Vino’s bike at the bottom of the pile, things might be different in July! 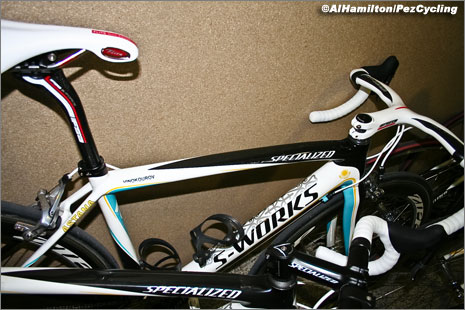 Vino’s bike at the bottom of the stack.

That was my day in Calpe, lots of teams, lots of climbing and very importantly, lots of sunny weather, roll on the 2010 season.