A new road season is under way and our PEZman in Italy, Alessandro Federico, was race chasing in Tuscany on the gravel roads of the Strade Bianche. We experience the race through Ale’s poetic prose and he shows us the Italian countryside through his camera lens. A beautiful but dusty Saturday in the Tuscan hills. 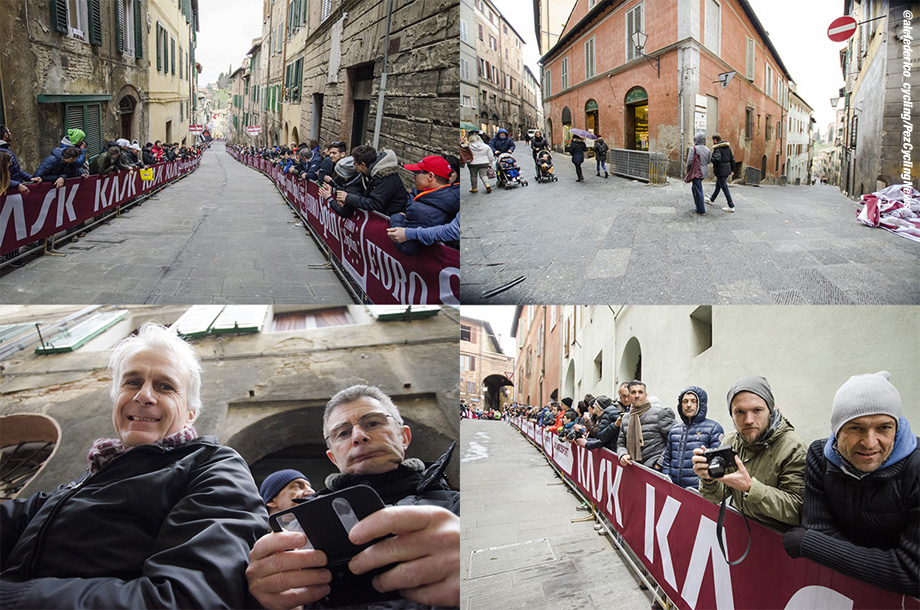 It’s about 15:40 in the afternoon when me, Angelo and other photographers are laying on the paved road climbing to the ancient town. All around the people have been waiting for hours and we just arrived, exhausted after a full day chasing. I’m excited, I’m breathless and my heart is exploding. It’s not just because we ran up the climb, to be in time for the final shot, no. It’s the emotion of being there, the excitement of being in such a privileged position to wait for the race. We become a sort of full observer. We are not part of the race and we are not part of the crowd, but we are in the middle of that, in between riders and crowd. 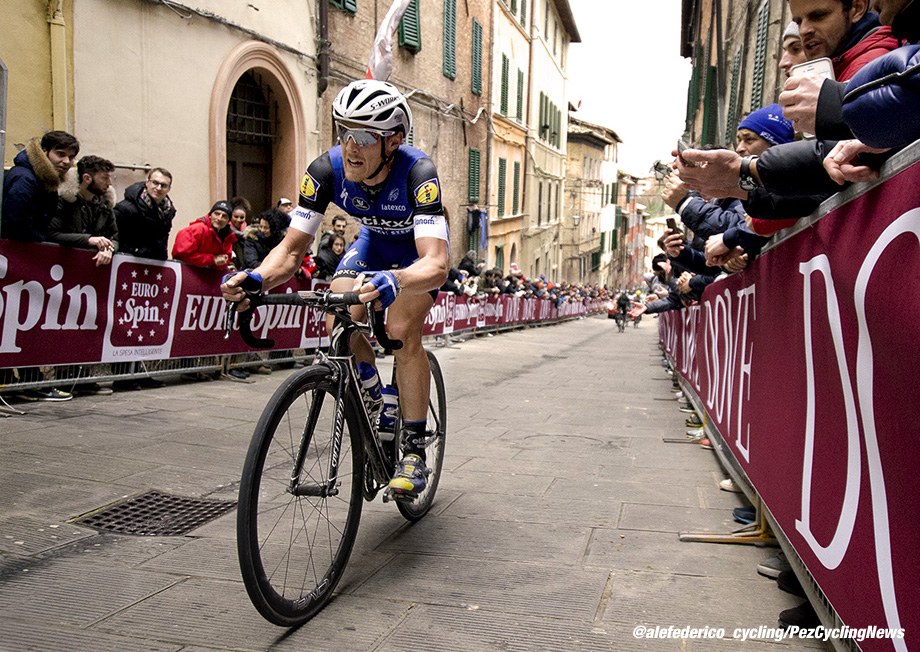 I look behind me to Angelo, and I can see the same emotion on his face. I talk to him, telling that it’s magic to be there once again and I don’t understand if he gets it or not, but it’s too late and the race is already approaching us. Brambilla has already put everything he had on the pedals and rides with exhaustion but with a good margin. When the trio comes it’s another story; Cancellara pushes hard than ever, Stybar and Sagan follow. It’s a moment only. I recall the same action last year with Van Avermaet, Stybar and Valverde. I realized that around me the noise of the crowd is so high that it could be scary. It could, if I was there. But I’m there just physically, because I’m somewhere else above the scene. I’m totally concentrated to try to stop a fragment of that moment with my camera, repeating all the actions I did all through the winter to be ready for this moment. The best action of the year it’s now and there won’t be a second chance. Cancellara passes through, Stybar and Sagan are on his wheel. 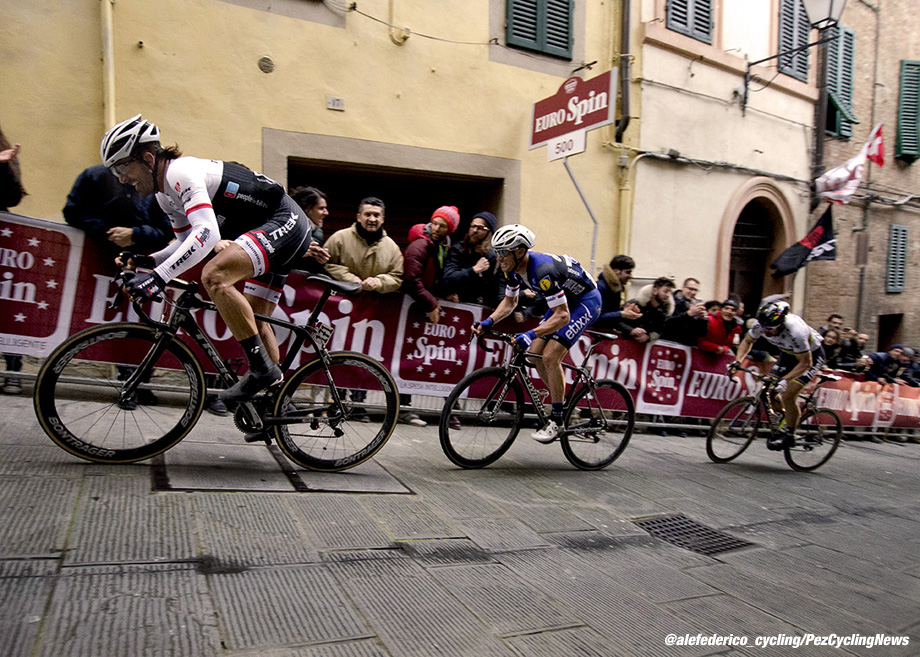 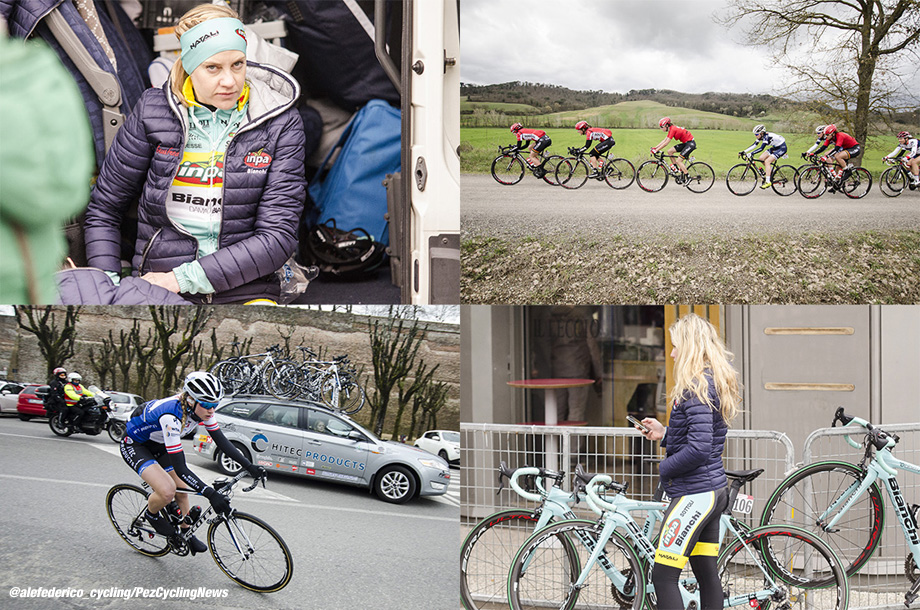 The deal was to watch the women’s departure, one time passing on the course and then to try to chase the men’s race to the finish. The modified route was helping a bit more, but being a new route we lacked experience. Can we do that or not? This was the question for everything. But everything really went well from the beginning to the end. The forecast was for rain (even heavy rain) from noon time, so that we were prepared for the worst, or the best if you prefer. At the end, we didn’t feel a drop, thanks to the south-west wind that blew quite strong all day long. This allowed us to have more time out of the car and enjoy the possibility of taking pictures and meeting the people. What surprised us a lot is the amount of foreigners coming down here to watch the race. This is not happening for Milano-Sanremo, for example, and even for the Giro. Many Belgians and especially Dutch, some English and a few Americans also. Siena is a big attraction, even without the cycling, but a lot of people were there for the race, maybe also attracted by the Gran Fondo the day after. 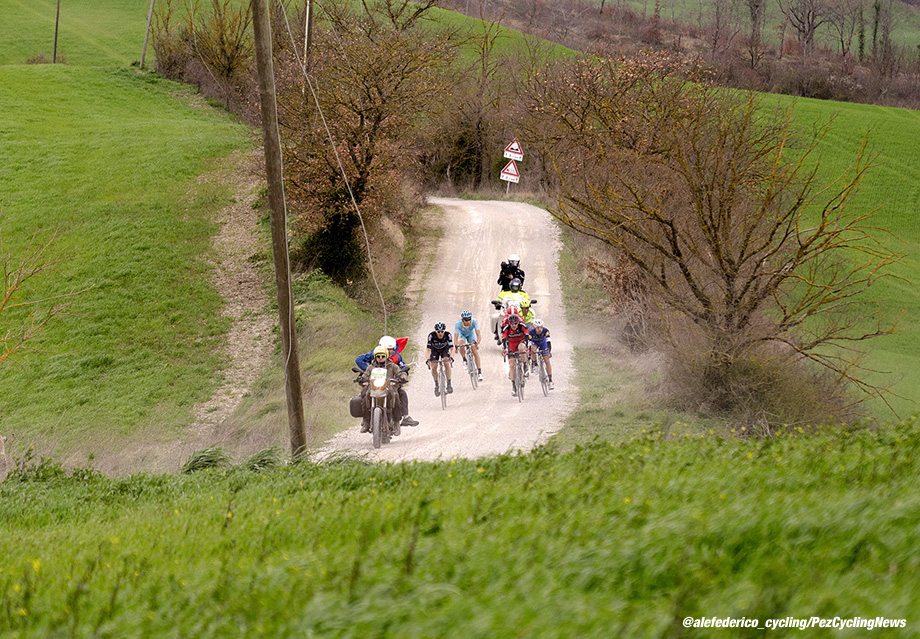 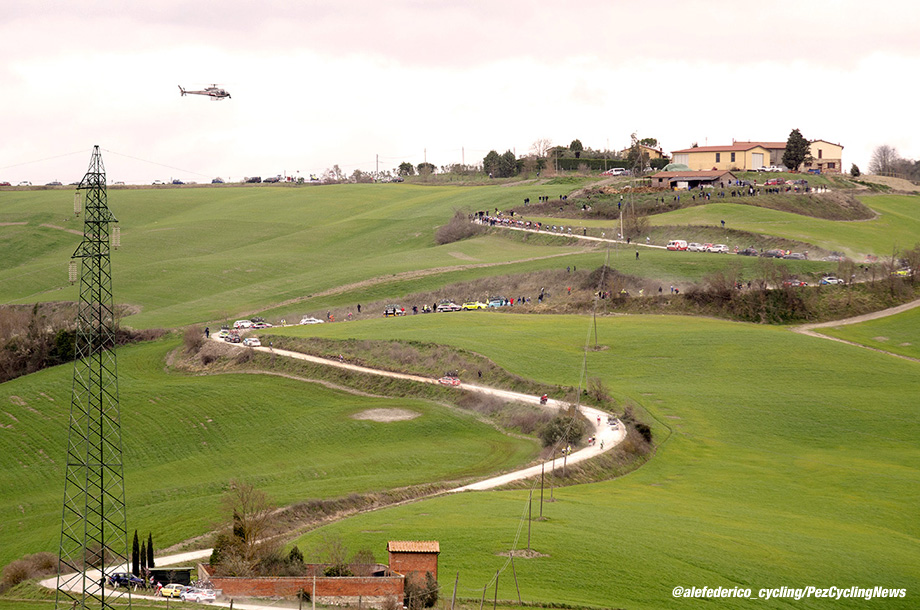 If few years ago we were almost alone, covering this event, now there are a lot of journalists and photographers coming here. I think this is a very good thing for cycling and Italian cycling especially, which sometimes is too close to the rest of world. To tell the true, we have seen more exciting edition of the race. There was a big group of people controlling and we didn’t see the big battle till the last kilometers, while last year, for example, Sagan, Valverde and Stybar were out front 60km before the finish. At least, this is what we saw from the road. The impression was also that Sagan was very controlled and Etixx had a big advantage with more options. I was waiting for something from the young Belgian Benoot and my favorite was Valverde, but both at the end disappointed. 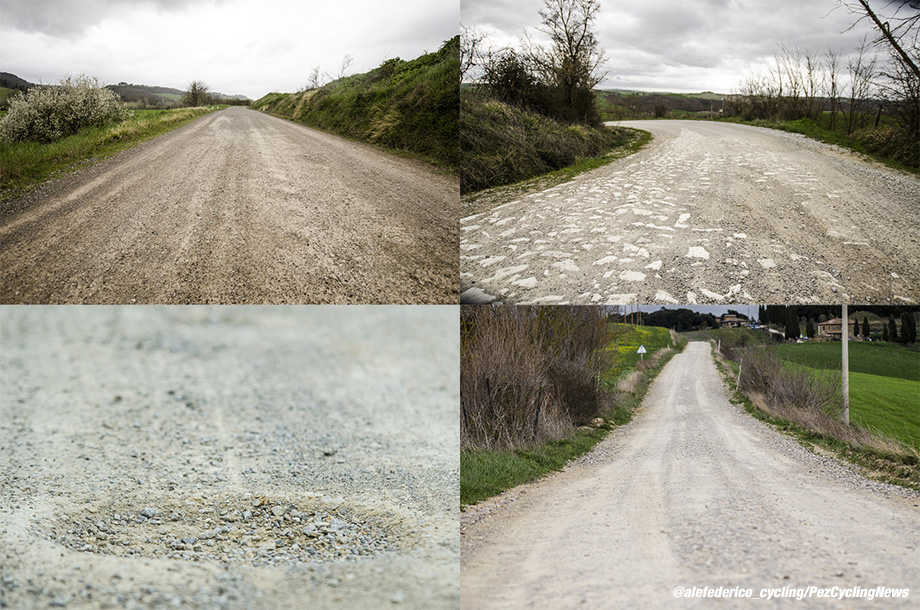 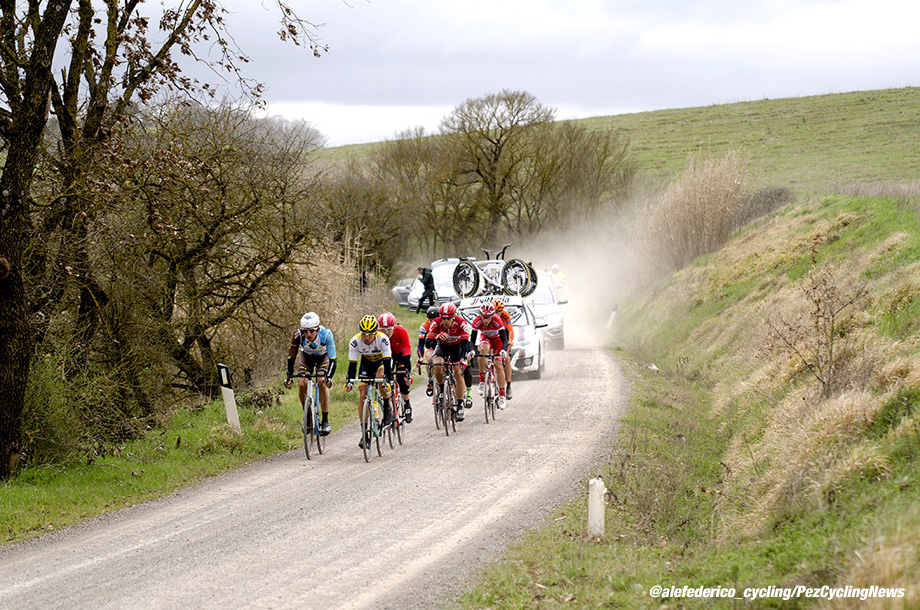 However, despite the length of the race being reduced to only 175 km (very short for a pro race), at the end we saw a surprising selection. I can’t imagine what could have happened if the big names made their moves earlier. The route was certainly harder due to the introduction of the new climb to San Martino in Grania, but in general these roads have no rest. Too many changes of rhythm, many hills and nasty descents on the gravel. This is really the northern classic in southern Europe, no doubt. We noted that the gravel condition was a bit worst than last year; some heavy rain in the last days have probably ruined a bit the perfect surface we usually see. What could have happened in the case of rain? We don’t know and we are happy we didn’t experienced it. It was so nice to enjoy some sunshine and walk on fields of grass after a long winter passed in the office or at home. 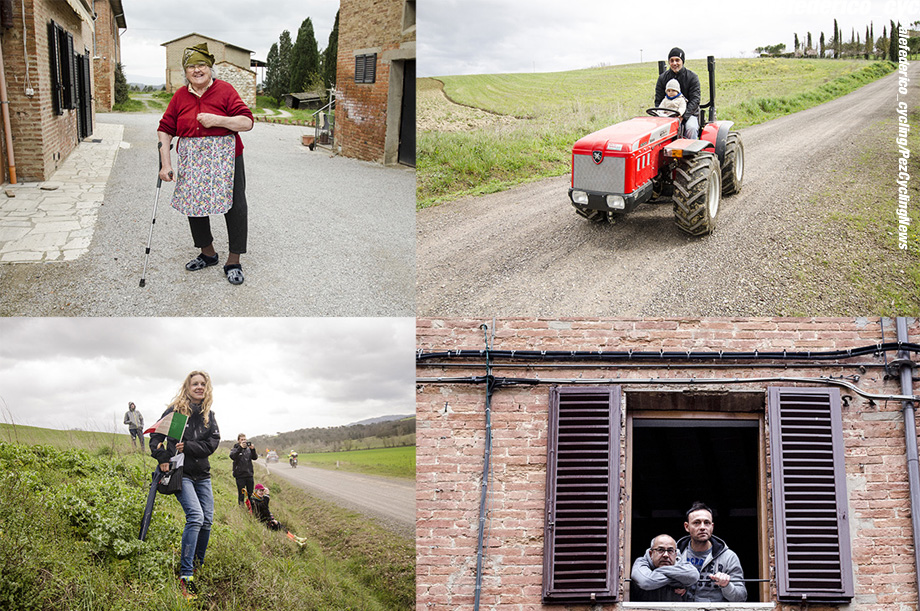 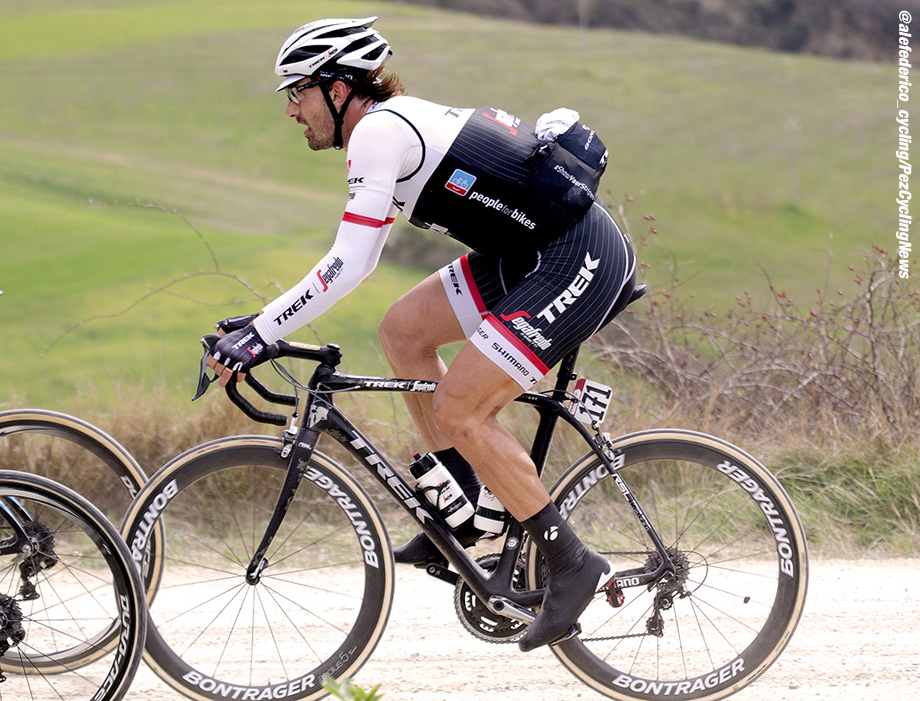 So that’s it? When next? I leave Siena still excited, still impressed. I will need hours to recover from the emotion, but I will recover. The time passes through the elements composing the soul, breaking up the emotion and placing them in order. But then, something will wake up all those pieces and again another emotion will explode. Stronger. 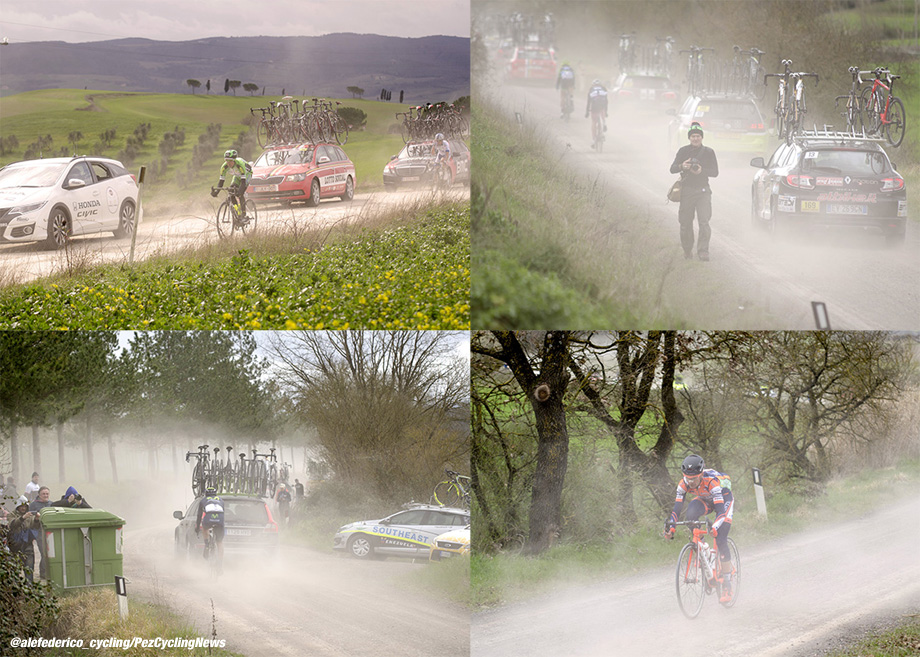 Clarke Victorious in Stage One of the Tour de Taiwan