I’m thinking of renting an apartment in the sea-side town of Calpe, as I seem to be down here for team training camps more and more often each year. Quick-Step, Astana, and Katusha have all been here recently and now RadioShack are here to fight over the hard roads of the area. Press day didn’t have many journos (none), but there was a TV crew and a few photographers…and me. But no Lance!

Calpe is about half an hour up the coast from my house so I didn’t need an early start, but had I known the team were not starting their ride till 11am, I could have had an extra hour in bed. The Diamante Hotel is becoming the hotel of choice for most teams in Calpe. It used to be the Esmeralda next door, but it appears that someone booked the wrong hotel a couple of years ago and now it’s the Pro Team haven. 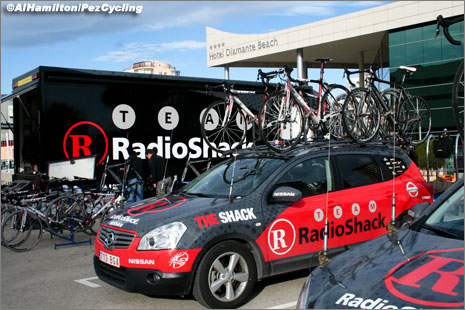 There was no mistaking which team was in attendance in Calpe.

I had arranged to meet my old mate; Alan Buttler. He is in a very special club of only a few people that have worked for victorious riders at all three Grand Tours, at the last count he had worked for the winner on 7 Tours de France, a couple of Giro d’Italia’s and a couple of Vuelta a Espaсa’s, there’s not many people who can make that claim. His long career as a mechanic has been with Motorola, U.S. Postal, Discovery Channel, Astana, and now RadioShack. 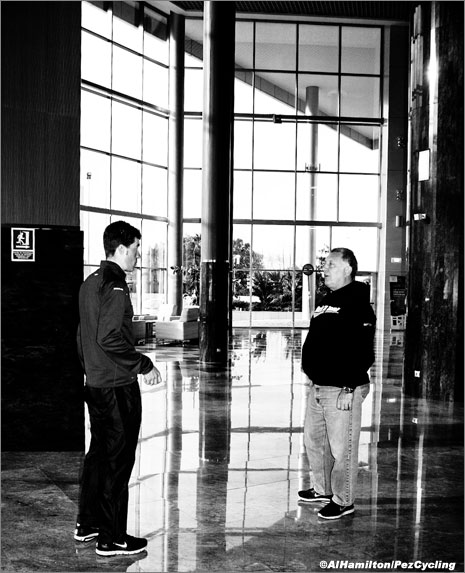 Haimar Zubeldia chats with Alan Buttler about his cranks in the lobby of the Diamante.

I owed Alan a coffee, as the last time we met at La Vuelta in Valencia I had left my wallet in the car, yes honestly! There was time to chat about old times over a cafe con leche with Alan and about Belgian cyclo-cross with Philippe Maertens who as well as being the press officer for RadioShack, he commentates on TV throughout the cyclocross season. Alan Buttler knows a lot of behind the scenes stuff that has to stay there, but if he ever writes a book I’ll be in that queue. 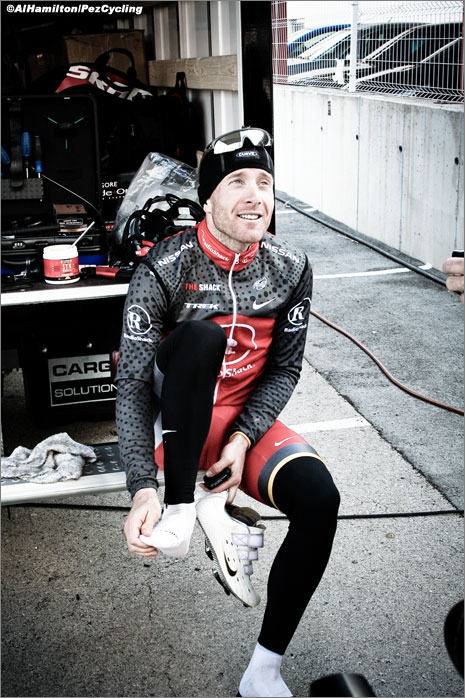 Lance might not have been in attendance, but everyone else was, including Levi Leipheimer.

As we crossed the hotel foyer, Haimar Zubleldia needed to talk to Alan about his cranks, there was a lot of this kind of stuff going on as all the team bikes are new and some of the riders are also new to the team. Over in the car park the first two riders to arrive needed to do shoe plate adjustments. The team are using LOOK pedals, all the bikes were fitted with Keo 2 Max except Levi Leipheimer who was using the Blade Carbon Ti. The two new riders where New Zealander; Sam Bewley and from Japan; Fumy Beppu. 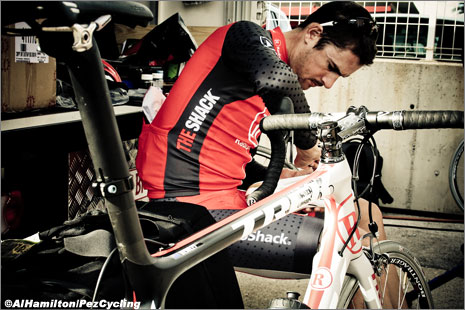 Young Kiwi, Sam Bewley, has made the jump from Trek-Livestrong to the ProTour for 2010.

Sam Bewley has stepped up from the Livestrong-Trek team this year after a very successful mountain bike, track, and road career. He has been a World Champion on the boards and has a great Pro road future ahead of him. He looked too intent on his job in hand so I left him to it to bother Fumy. 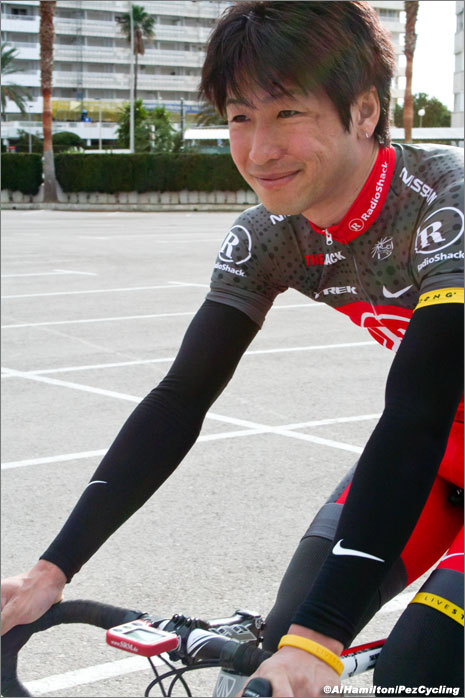 Fumy Beppu is a late addition to Team RadioShack; his profile is not yet on the team’s web-site. Last year he rode for Skil-Shimano, but had to get released from his contract before joining The Shack. No less than Lance Armstrong spoke up for Fumy as a strong team rider, due to them being in Discovery Channel together in 2005 to 2007.

So, Fumy are you happy to be with RadioShack?

“Yea it’s great to be here in this team, to be back. I was so happy to receive my release. Everyone on this team wants to help and it feels good.” 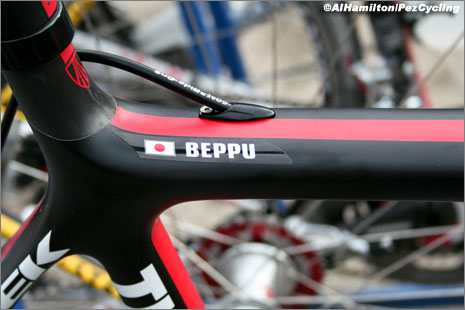 What about this year?

“This is a big team with so many good riders I will have to fight to get a place in the team; I’m looking forward to it!”

Lance has spoken highly of you, that must be nice?

“Sure, but I think people know I’m a hard working team rider, so….” If you check-out Fumy’s race stats you will see he has ridden nearly every race possible, he’s a nice guy and it can’t be easy coming from Japan to Europe. 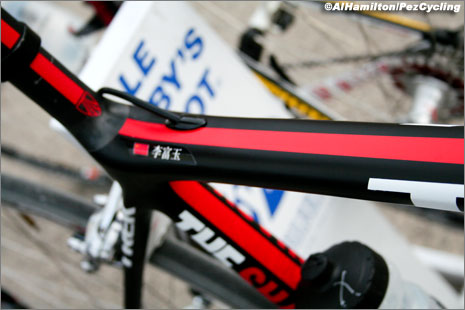 That looks a bit different…

Talking of riders from far flung places, I had spotted a name tag in Chinese on one bike that turned out to belong to Li Fuyu. Li rode for Discovery in 2007 becoming the first Chinese rider in a Pro Tour team. After Discovery he was with Trek-Marco Polo before coming back into the fold this year with RadioShack. I’m sorry, but I had to ask how to say his name, because I can’t read Chinese! This broke the ice and in very good English he explained how happy he was to be in the team, I commented “this is big, eh?” His look said it all in any language! If he rides on morale, this happy guy will go far. 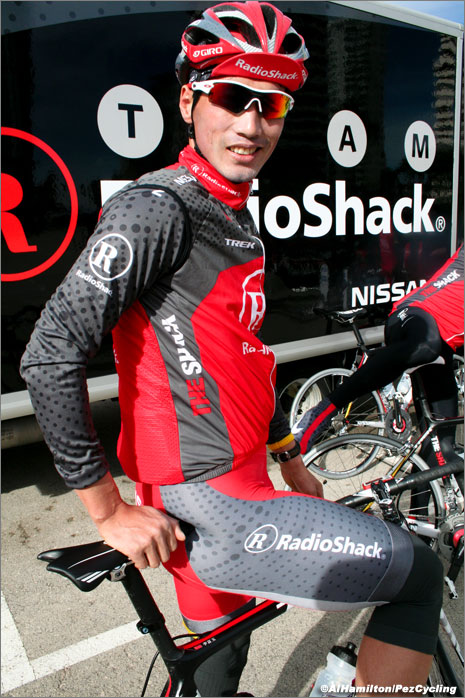 Li Fuyu hails from China and forms part of a solid Asian contingent within RadioShack.

The other riders started to wander down to check out their bikes before the ride. Haimar Zubeldia was ready to go as DS; Alain Gallopin explained the route of the five hour ride which included four handy climbs, all are around 700 meters high. 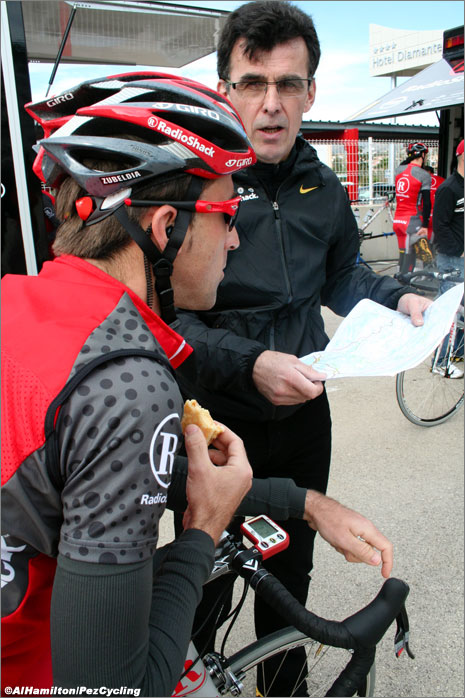 The TV crew were interviewing riders and team director; Dirk Demol (Paris-Roubaix winner) as the top man Johan Bruyneel kept a watchful eye on the proceedings. 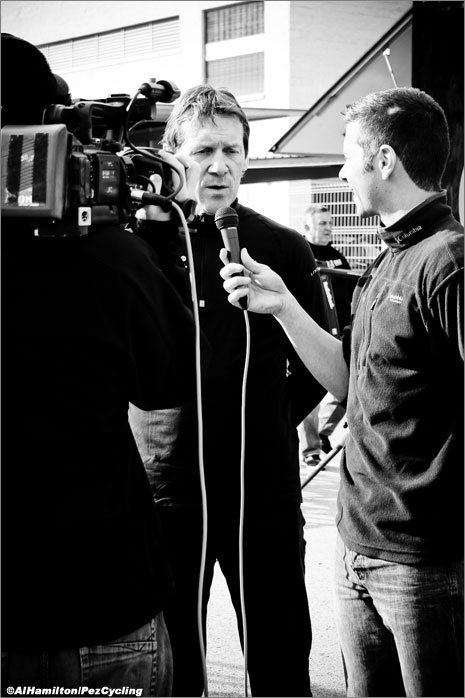 Dirk Demol gets some tv time. 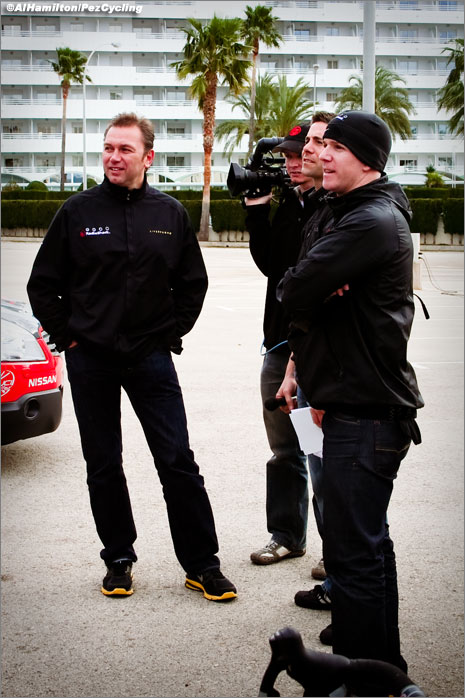 Chris Horner’s new yellow shoes were very obvious, but he was more interested in drinking a can of coke than messing with shoe plates. 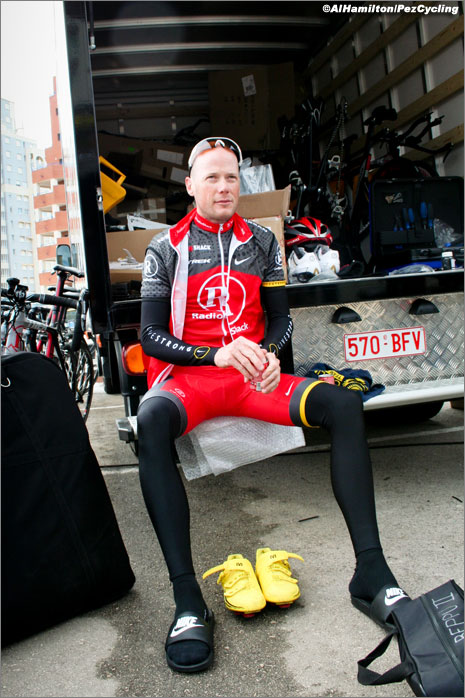 Haimar Zubeldia was happy to chat in the same “pleased to be here” attitude as all the others. He knows this area well from previous training camps and didn’t think it was too hard a day, personally I couldn’t agree, but then it’s not my job the ride a bike all day every day. The shout went up and they were off, Alan was in the car today so no second coffee and I’d see him later. 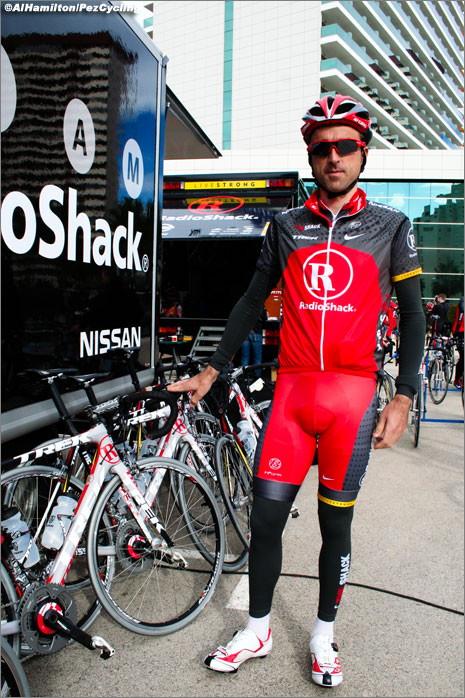 After a relaxed lunch Alan called me to say they were getting near to Calpe. Back at the hotel the mechanics were still working building up the time trial bikes. Most of the work seemed to fall to Craig Geater. Craig has been a mechanic since he worked for the failed Linda McCartney Team; we met then in Belgium in a small hotel which was over booked. I have apologised for his discomfort, but it wasn’t my fault, honest!

Craig is from New Zealand and has just bought a house in Belgium, but admits he probably won’t see it very often. Of the mechanics on the team they are a mix of nations, English, US, New Zeeland, Belgian, Portuguese and a Mexican and the masseurs are much the same. 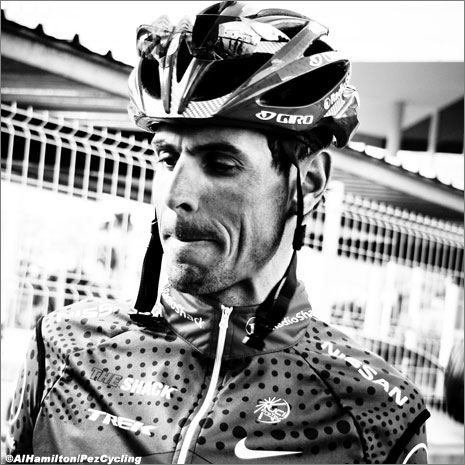 Half the riders appeared as there had been a split which seemed to have been caused by strong man; Tomas Vaitkus. The big Lithuanian has local knowledge on his side as he has a house up the coast. His shout of “losers” to the second group said it all! 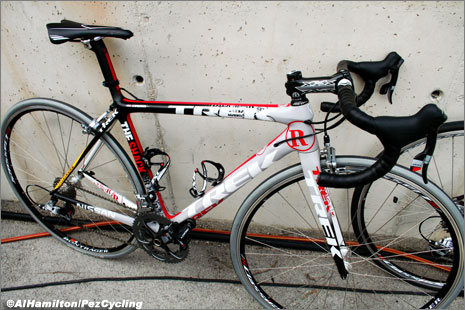 Riders having problems were Andreas Klцden, with his SRM and computer, but Craig would sort it out. Levi was having saddle adjustments and needed to make sure it was level, but the true Pro was attending to it himself. 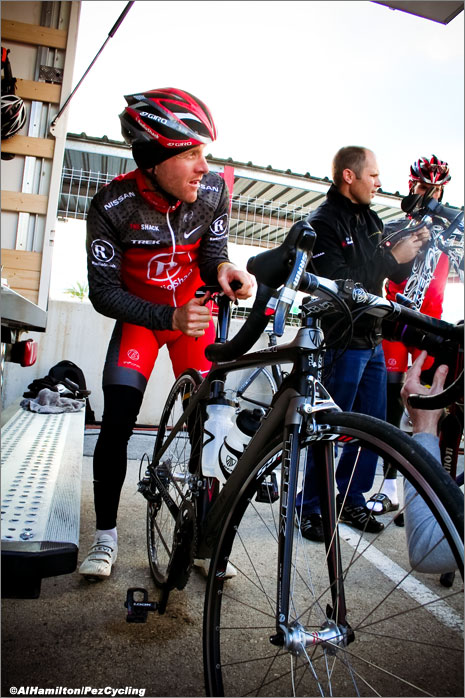 Levi takes a hands on approach to his fit.

Over a last coffee, I remarked to Alan how the team had a similar feel to when I visited the Astana training camp two years ago, he summed it all up in one phrase “same stuff, new paint job!” With that it was time for me to go home; maybe I’ll be back to the Diamante Hotel next year, by the amount of teams that have used it this year there is a high possibility.