Roadside PEZ: The rain in Spain does not stay on the plain, it is usually on the hills, especially near the coast in February if there is a bike race. Stage 2 of the Volta a la Comunitat Valenciana made its wet way from Alicante to Denia, finishing with a circuit taking in the climb of Montgó. Al Hamilton was roadside for the finalé.

After the near perfect day on Wednesday’s stage 1 team time trial, the plan for Thursday’s stage 2 was to go to the start, take in a climb mid-race, see the peloton climb Montgó before tearing down to the coastal town of Denia to see the finish. Two problems with that: 1. EUROTRASH had to be put together and Ed’s Copenhagen ‘6 Day’ needed to be published, and 2. There was no way to get from the race course to the circuit before the peloton. So, ‘Plan B’ was enacted: Go to Montgó for the penultimate climb and Denia for the finish. 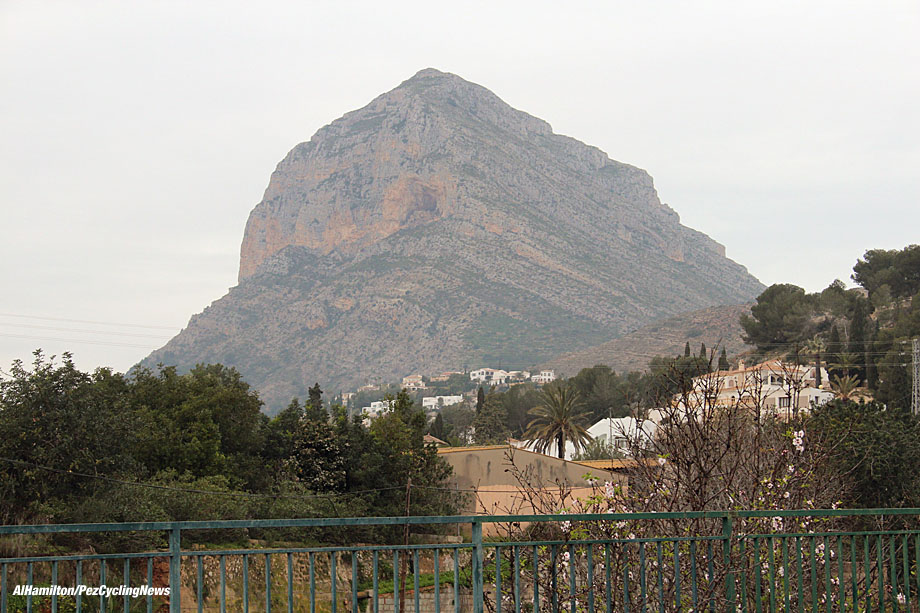 Ale Federico would be disappointed in my ‘Race Chase’ as it would be more of ‘Race Wait’. Looking up at the climb of Montgó from Jávea/Xàbia reminds me of my mate and ex-pro Steve Sefton who used to live at the base of the climb, he will be wishing he was here today. 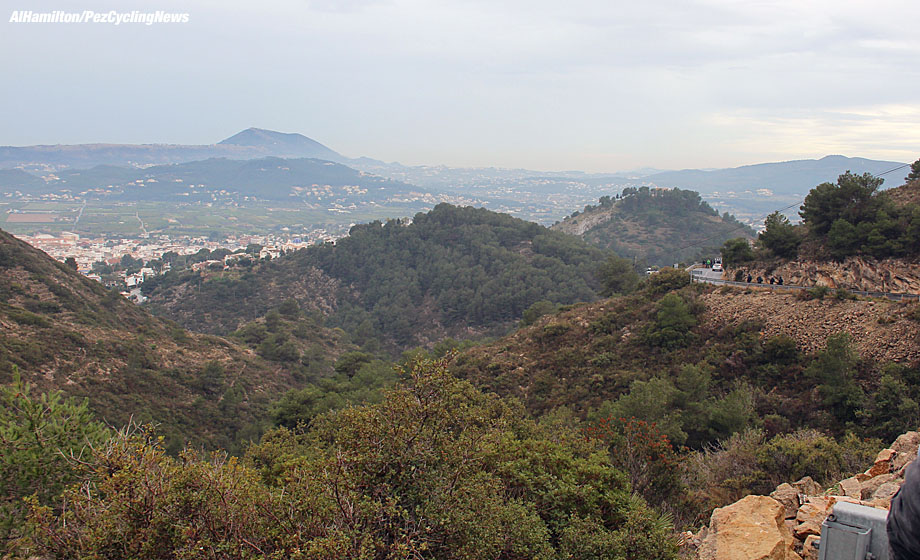 The race has to climb up here twice

The climb isn’t too tough and can be taken on the big ring (if you are a pro), but of course a ride of 180 kilometers will dull your freshness. The car had no problem. 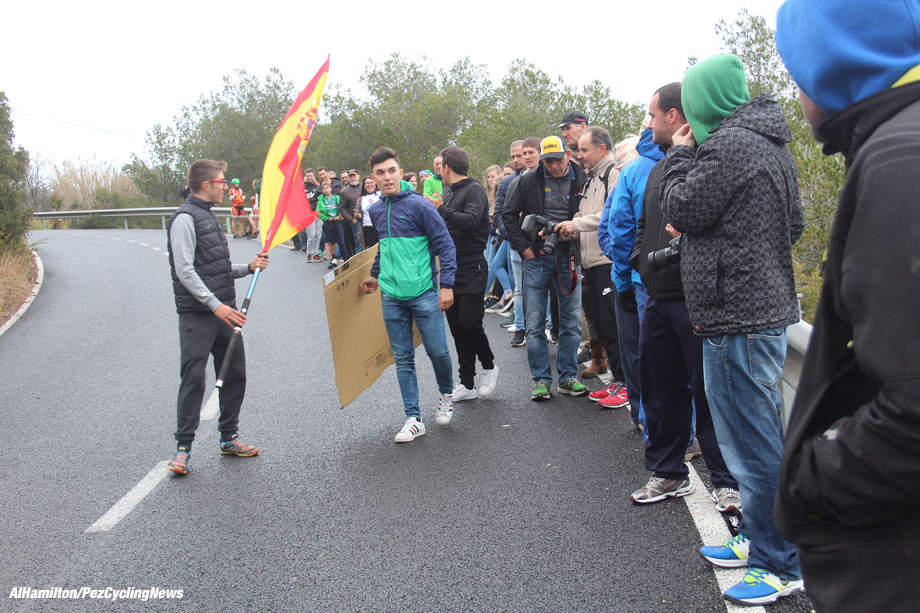 I got there early, it was raining and there was a cold wind blowing up the hill, not the weather you expect on the Costa Blanca, but it is still winter. The fans were starting to line the road, these guys had a flag and banner, but I never found out what the message, a secret for the TV camera. It was too cold on the exposed side of the hill – A move was called for. It was also a good idea to be nearer the car anyway, a quick getaway would be needed to get to the finish line. 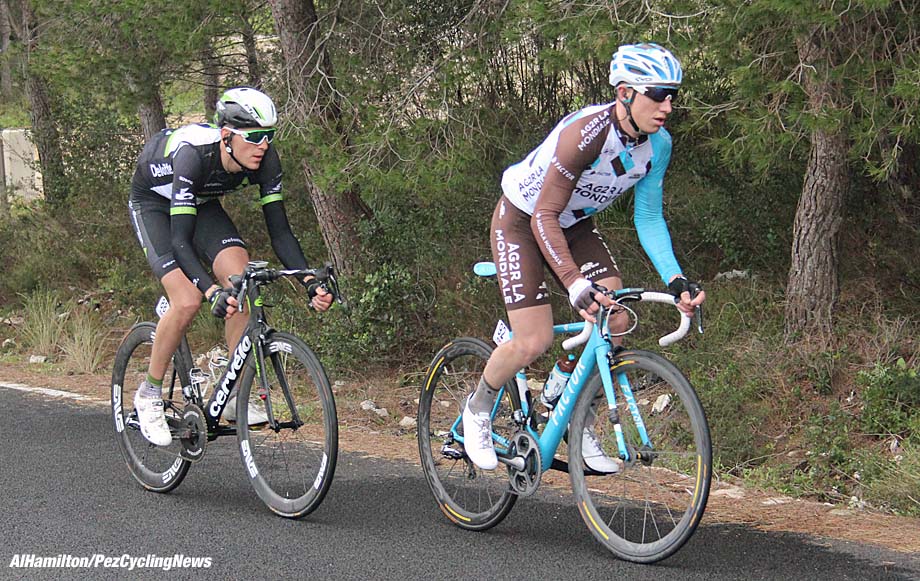 First to appear was two of the original break of the day: Johan van Zyl (Dimension Data) and Cyril Gautier (AG2R-La Mondiale), they had escaped on the second climb of the day, the Alto de Xixona, and at one time they had a five minute lead. Hector Saez (Caja Rural-Seguros RGA) had been with the other two all day, but was dropped the first time up Montgó, not by much thanks to a bit of ‘sticky bottle’. 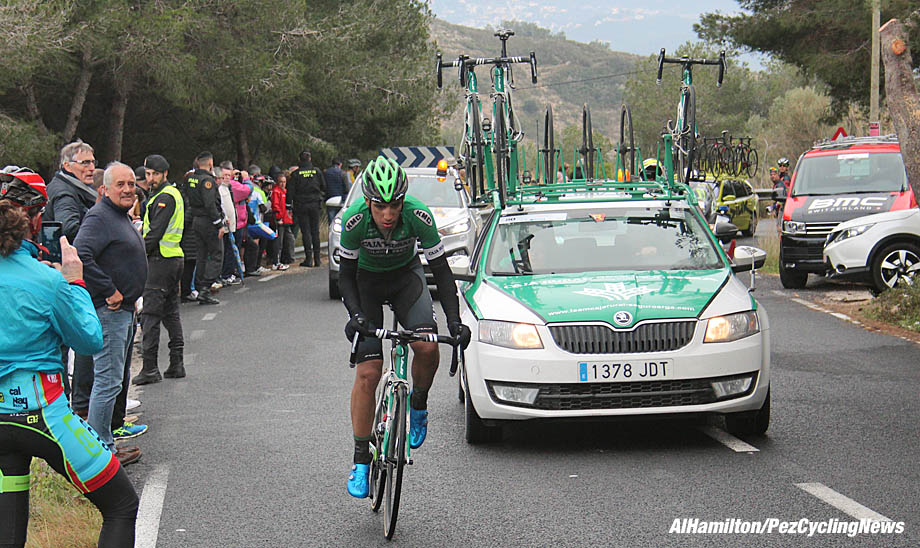 Hector Saez and his team car in close attendance

It wasn’t long before the unmistakable sound of a helicopter thudded through the trees as it hovered close to the peloton who were slowly pulling back the escapees. BMC were in control for the yellow jersey of Manuel Senni. At the end of the day he would lose the jersey, but it would stay in the team. 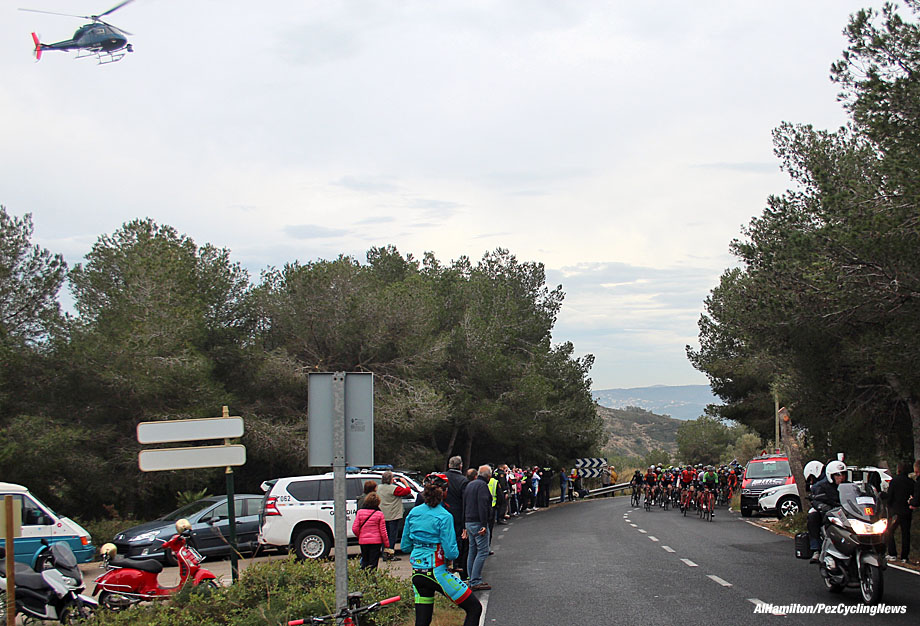 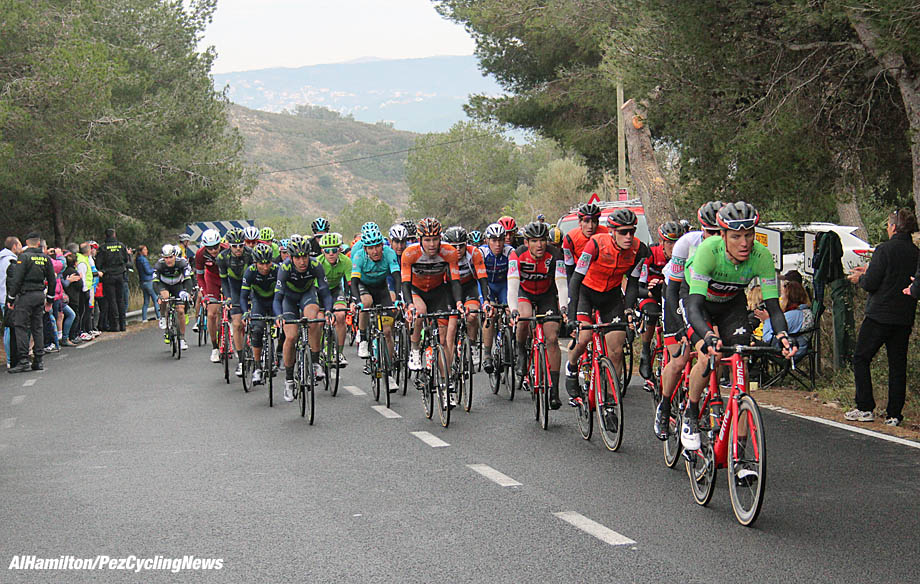 Halfway down the bunch was Giro d’Italia and Vuelta a España winner Nairo Quintana, he was surrounded by his Movistar teammates. He tried his hand at an attack later on the circuit, but nothing came of it. 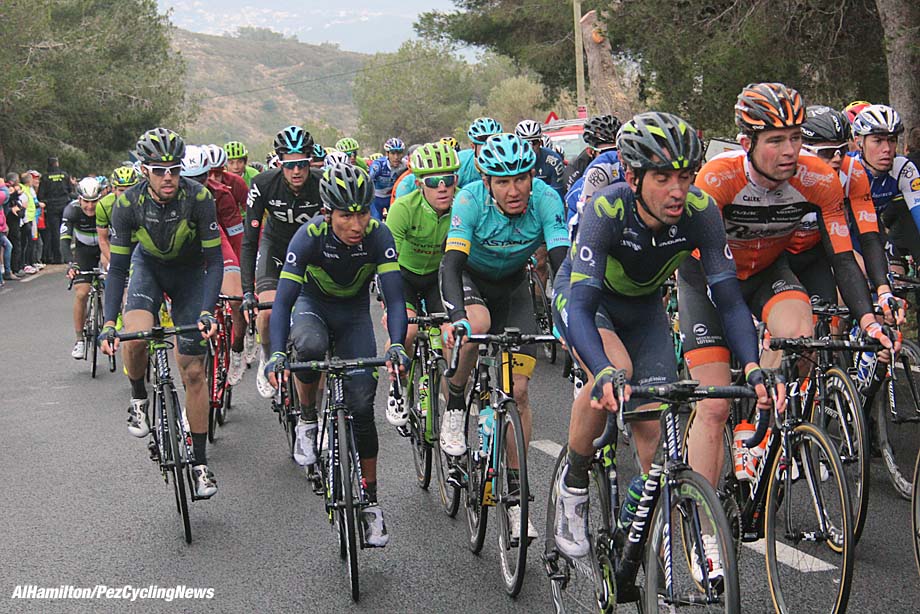 Nairo and his boys

You could see in the riders faces that it had been a hard days work in the saddle. 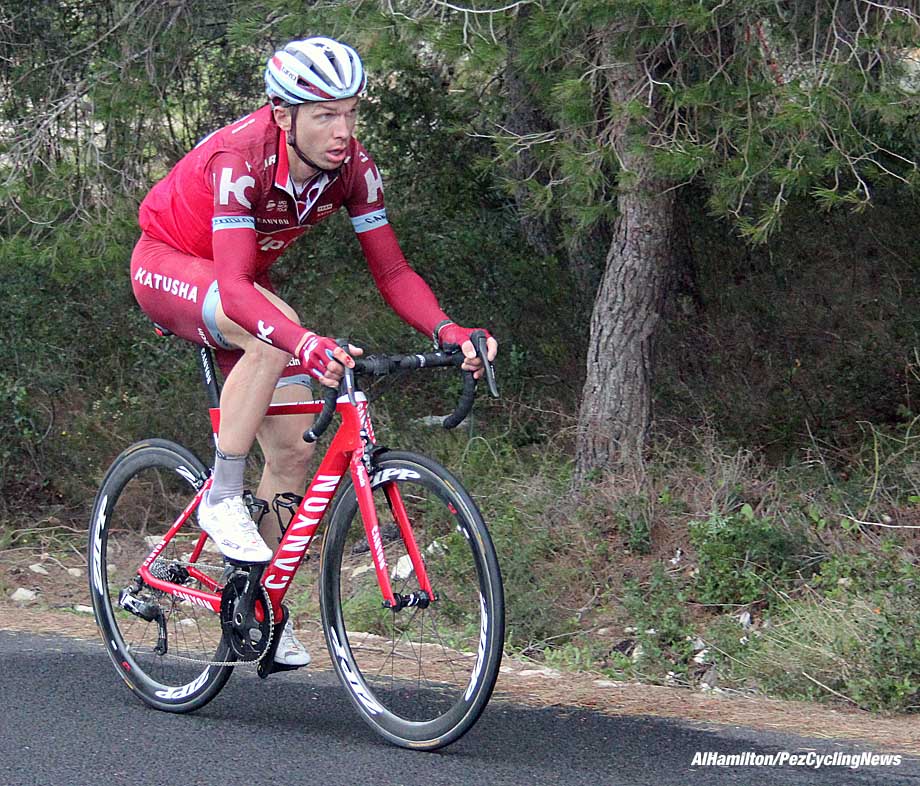 Tony Martin was at the back of the main group; keeping his powder dry? As it turned out he had a plan to give his new Katusha-Alpecin team his first victory. 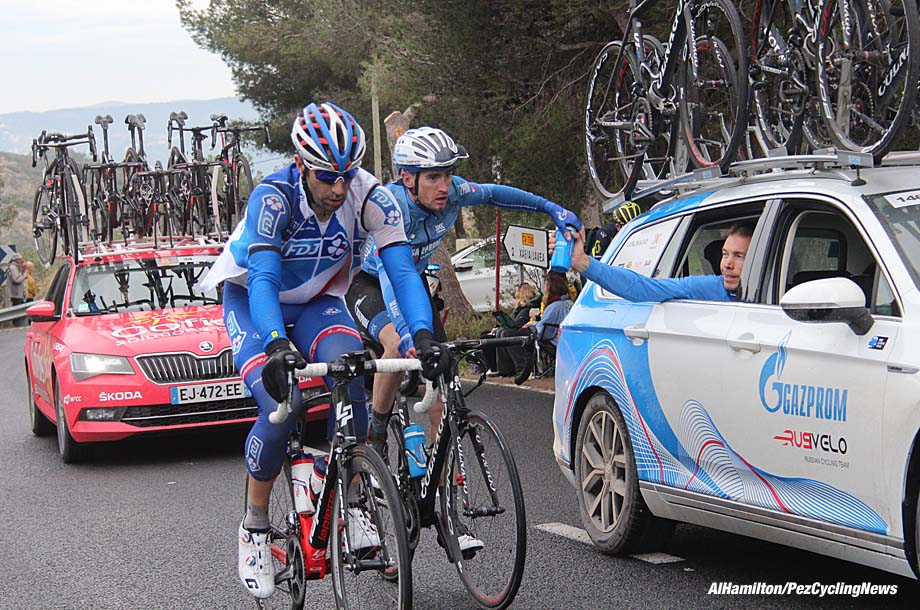 Just off the back

The stragglers started to come up the climb, many would make it back to the main bunch, but there was also a large group that would finish 20 minuted down. 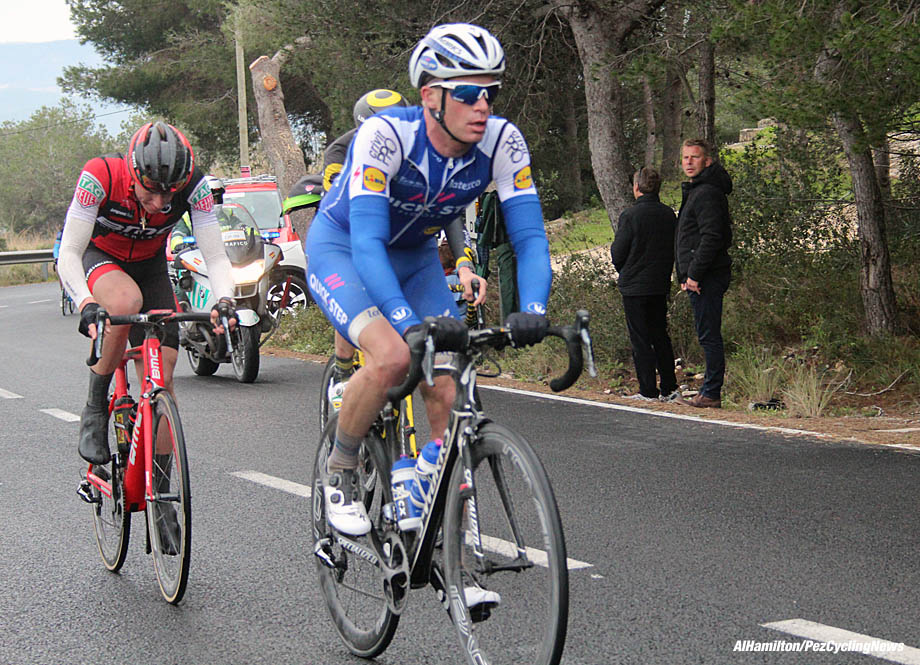 ‘6 Day’ man, Iljo Keisse of Quick-Step must have been thinking of the dry indoor wooden tracks of the winter season and not of a wet, cold day in Spain. 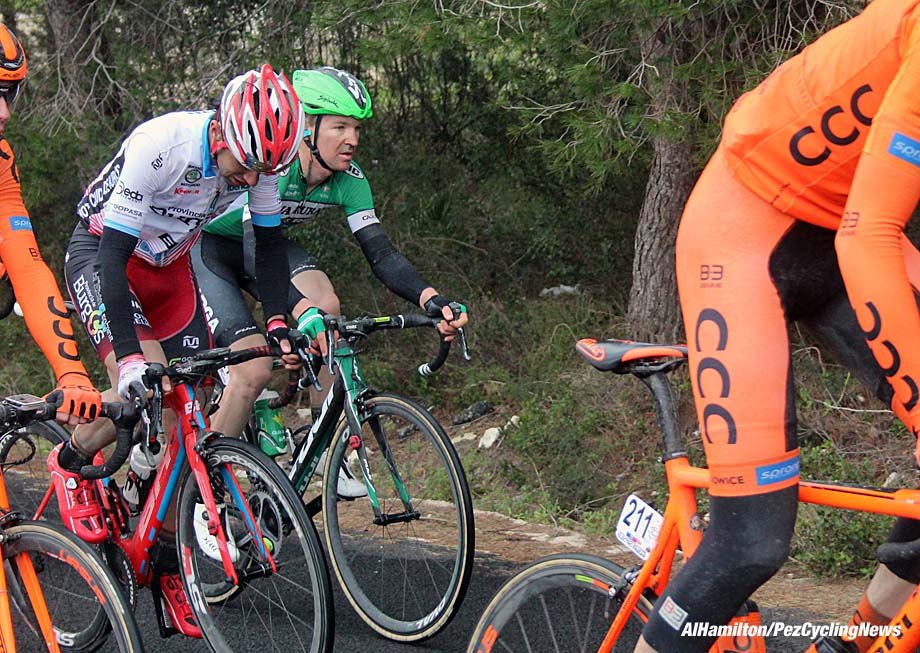 I was keeping an eye open for our man, Chris Butler of Caja Rural-Seguros RGA. He was safe in a large chase group, but like everyone else he looked keen to get the torture over as soon as possible. 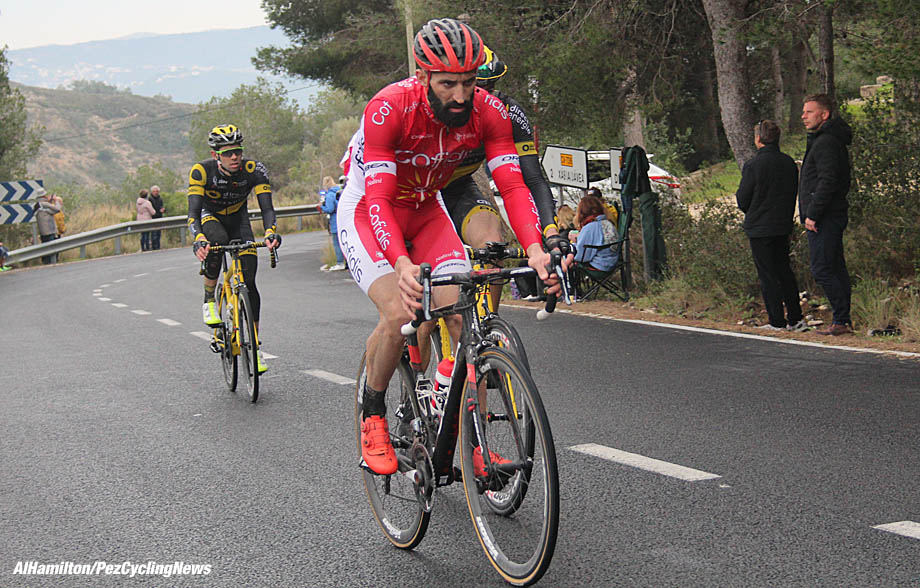 Big beard wearing Geoffrey Soupe was off the back of the big group that came in at 20 minutes, but he got back to them before the finish. 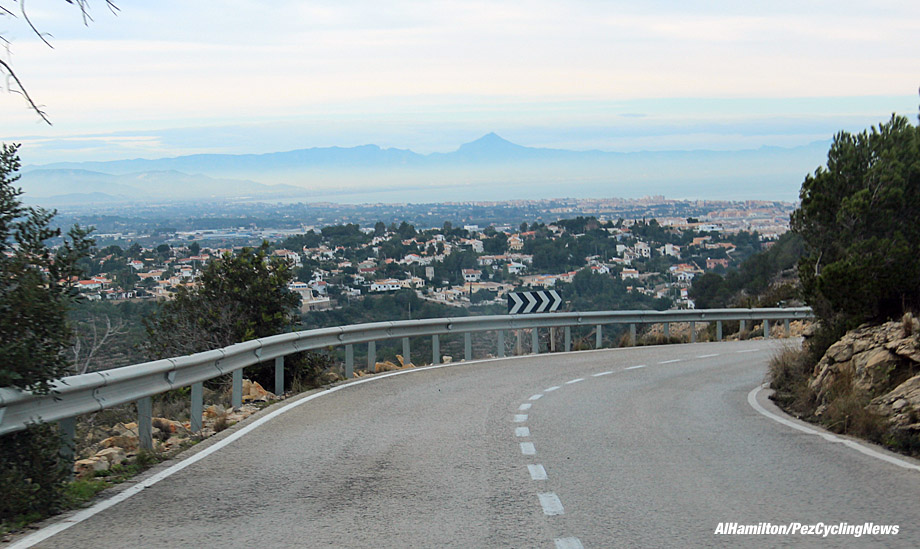 The view down to the finish in Denia

Getting the car out wasn’t too difficult, use of the horn had the police come to my rescue and they maneuvered me past the waiting traffic to let me chase the race down to Denia on a closed road. There isn’t much to beat that feeling. 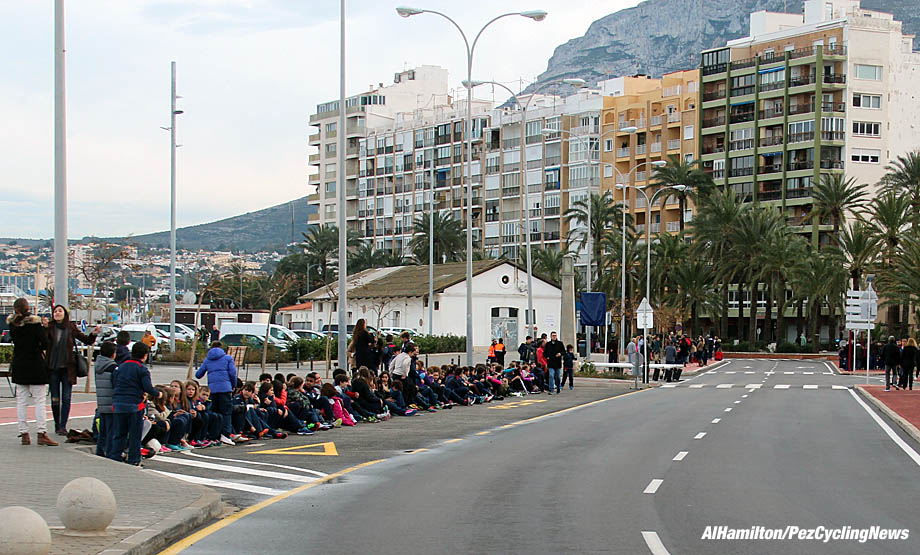 Down in the port town of Denia, the local school kids had been brought out to see the race come through. I didn’t see them at the finish, so class must have reconvened or they went home. This being the first race of the year it was good to meet up with old friends. Laura Meseguer was there for Eurosport and is always a pleasure to catch up with, as is soigneur John Evans who now works for Sky – he had been with Tinkoff last year, so it was good to see he had a new team, but when you are as good at your job as he is… 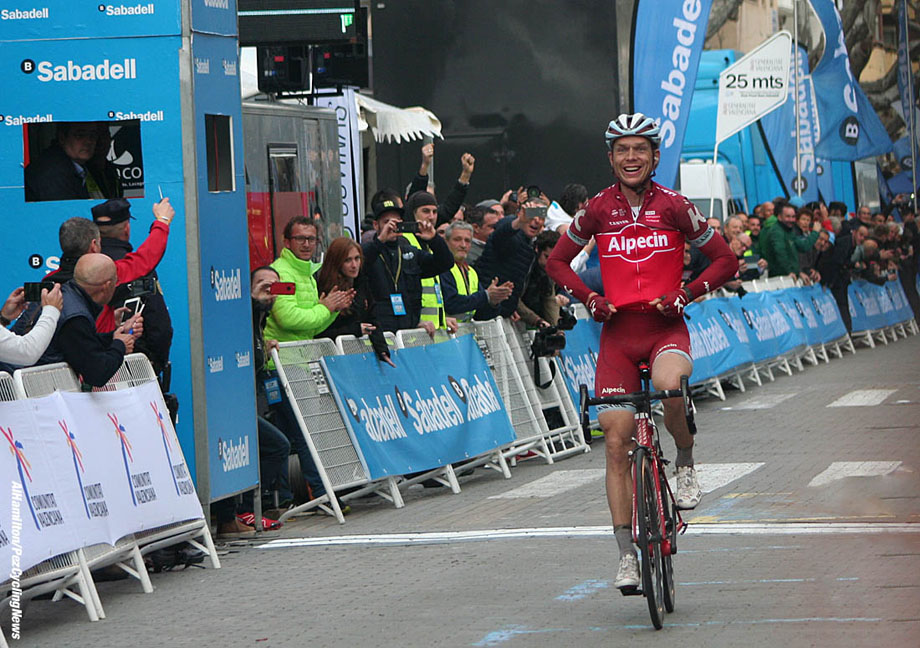 At the finish line we could see on the big screen that Tony Martin had gone solo from a small group that had escaped the last time up Montgó. He shot down into town for the stage win just 11 seconds ahead of the chasers, including Quintana and Astana’s Michele Scarponi. 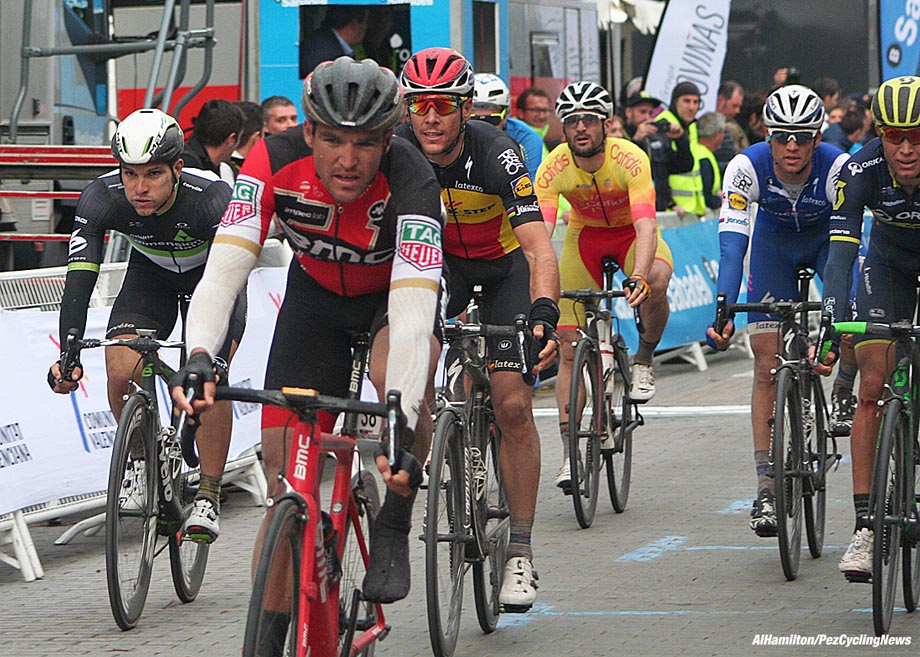 Next at 19 seconds: Greg Van Avermaet won the bunch sprint for 8th to take possession of the leaders jersey. 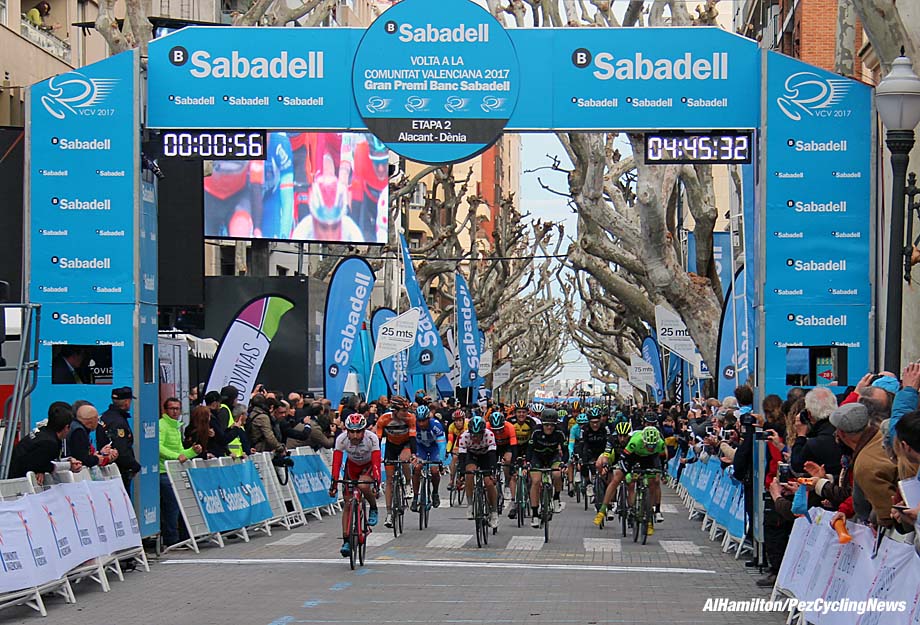 The next bunch a 59 seconds

The next big group was brought in by Ibai Salas Zorrozua of Burgos-BH just a head of (ex) KOM Michal Kwiatkowski (Sky). 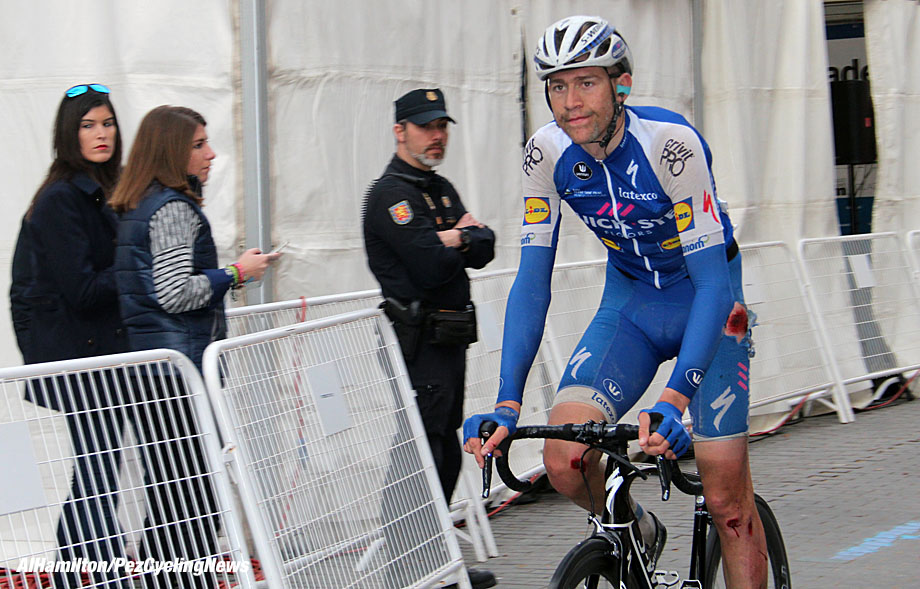 Laurens De Plus (Quick-Step) was one of the unlucky fallers during the stage, he finished at 4:55, but he did finish ahead of 2016 Paris-Roubaix winner, Mathew Hayman (Orica-Scott) along with Pieter Weening (Roompot-Nederlandse Loterij). Not so lucky was Vuelta a España stage winer, Sergey Lagutin who broke three ribs in a crash early in the stage. Lets hope he will have recovered in time for a ride in the Giro d’Italia. 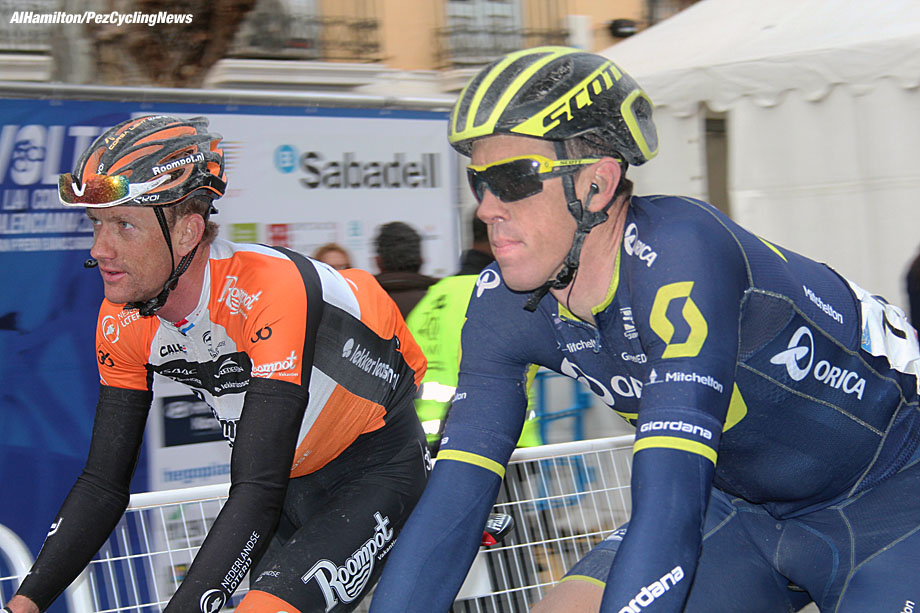 Pleased to win early in the season, Tony Martin said: “I crashed two times, but I had a plan in my mind, and in wet conditions not so many riders can go with me. I took some risks but everything worked out to the plan. I usually win only in the time trial so it’s special to win in this road race.” 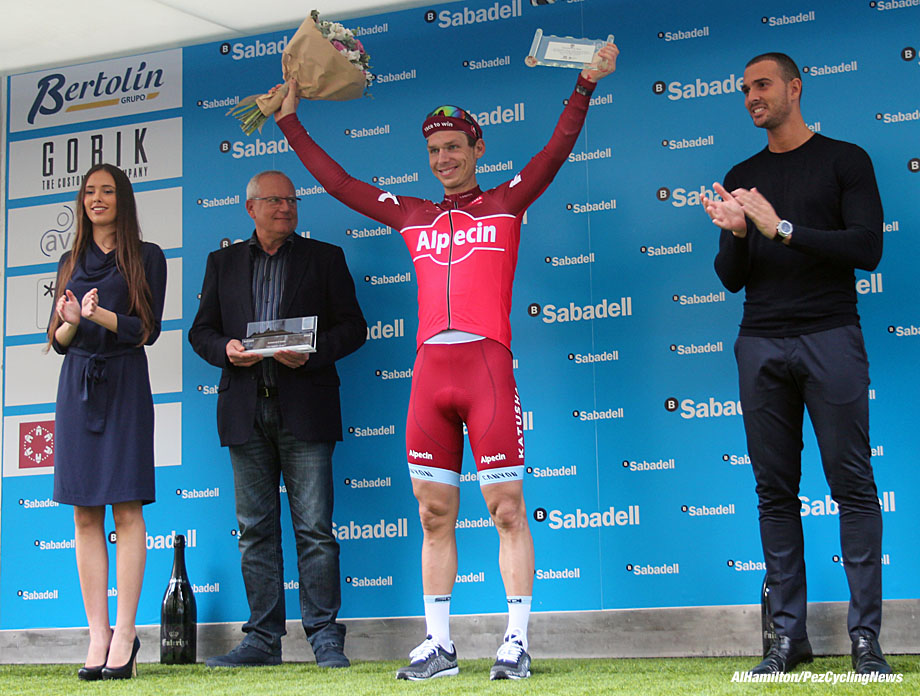 Tony Martin on the podium

Greg Van Avermaet kept the overall lead in the BMC house and still has a 21 second buffer on the next non BMC rider, Sky’s David Lopez. 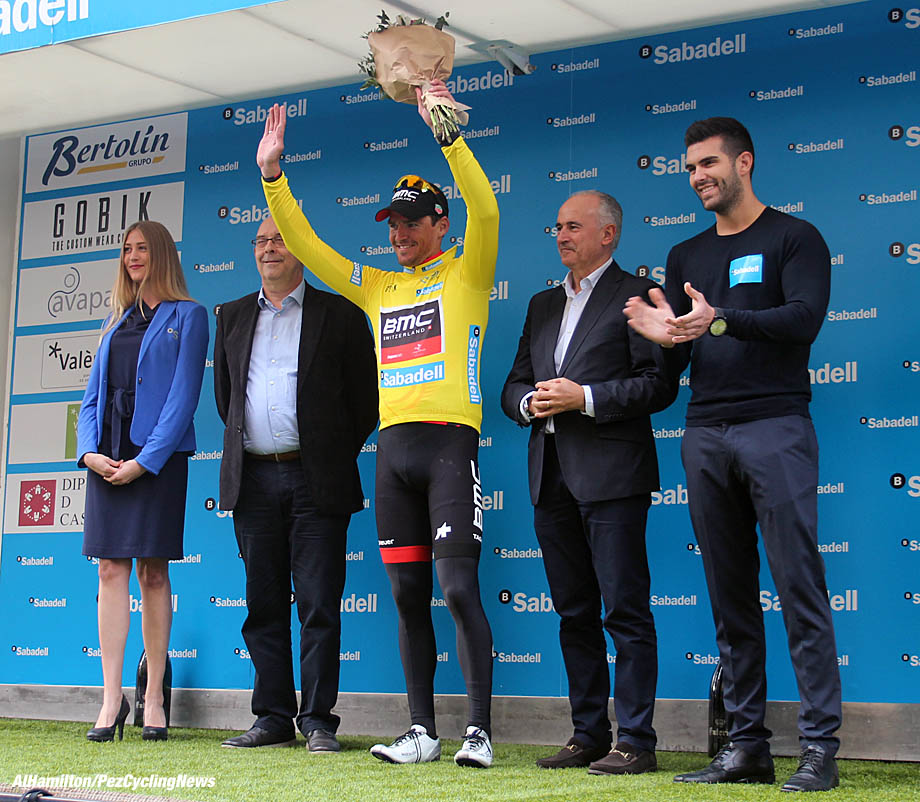 Everyone on the podium was happy with Greg’s lead 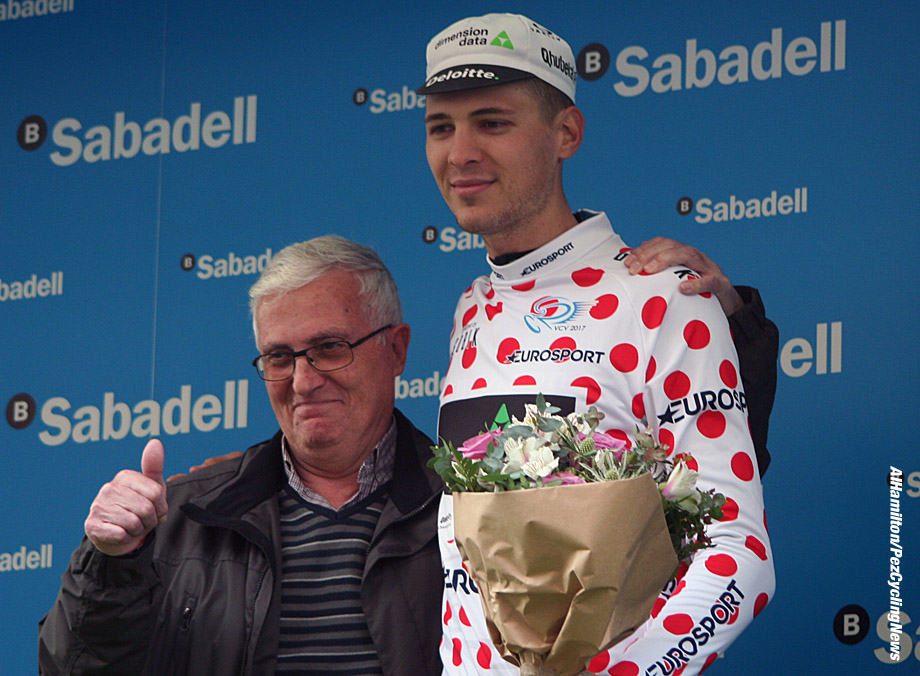 Thanks to the long break of the day, Dimension Data’s Johann van Zyl took the KOM jersey from Michal Kwiatkowski. There was just the TV interviews with Laura to be done and then everyone could go for a warm-up.

The 2017 Volta a la Comunitat Valenciana has been very successful, building on its return last year, lets hope it carries on. Still two stages to go, remember to catch-up with the final results and videos in Monday’s EUROTRASH. 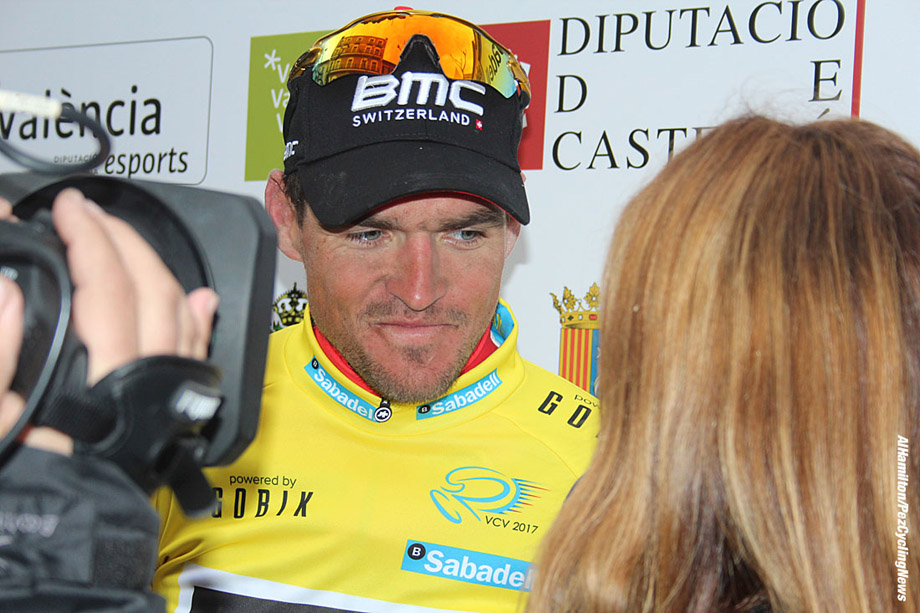