Roadside PEZ: A Day For Contador Not Greipel!

Roadside PEZ Paris-Nice Stage 7: Daniel Thévenon is moving nearer the Grand Finalé in Nice on Sunday, on Saturday he was at the summit finish on the Col de la Couillole to catch the decisive action. With (little) thanks to French internet here is Dan’s take on Paris-Nice stage 7, but it was not a day for the Gorilla!

At an altitude of 1,678 meters, the Col de la Couillole, in the Southern Alps, is the highest location to ever host a finish of Paris-Nice. In the final part of the ascent, which lasts nearly sixteen kilometers, the competitors will encounter snow for the first time in this edition of ‘the Race to the Sun’. 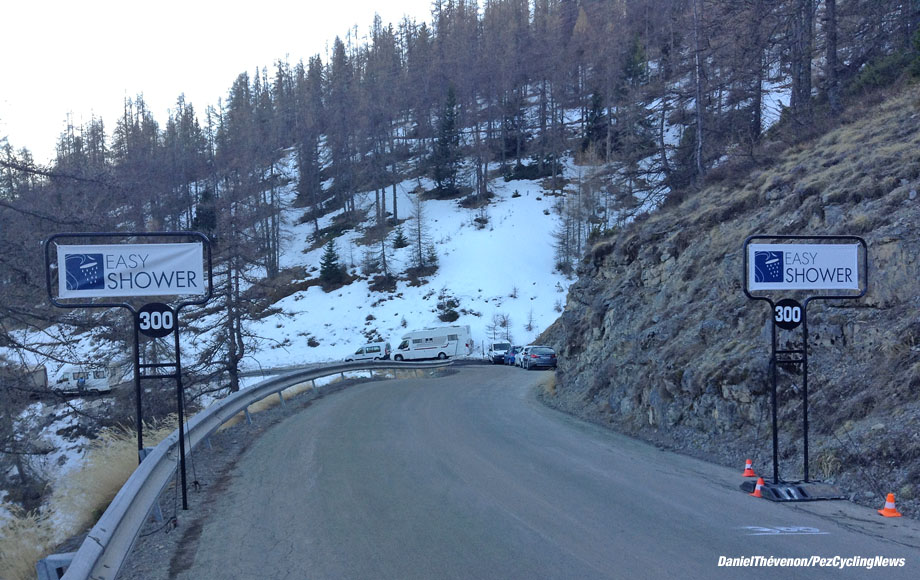 Spanish tourists express their admiration for Alberto Contador. “He is an example to us all”, they claim. The leader of Trek-Segafredo will soon answer their call, forming an alliance with Sky’s Sergio Henao to pummel race leader Julian Alaphilippe before attacking on the final ramp. 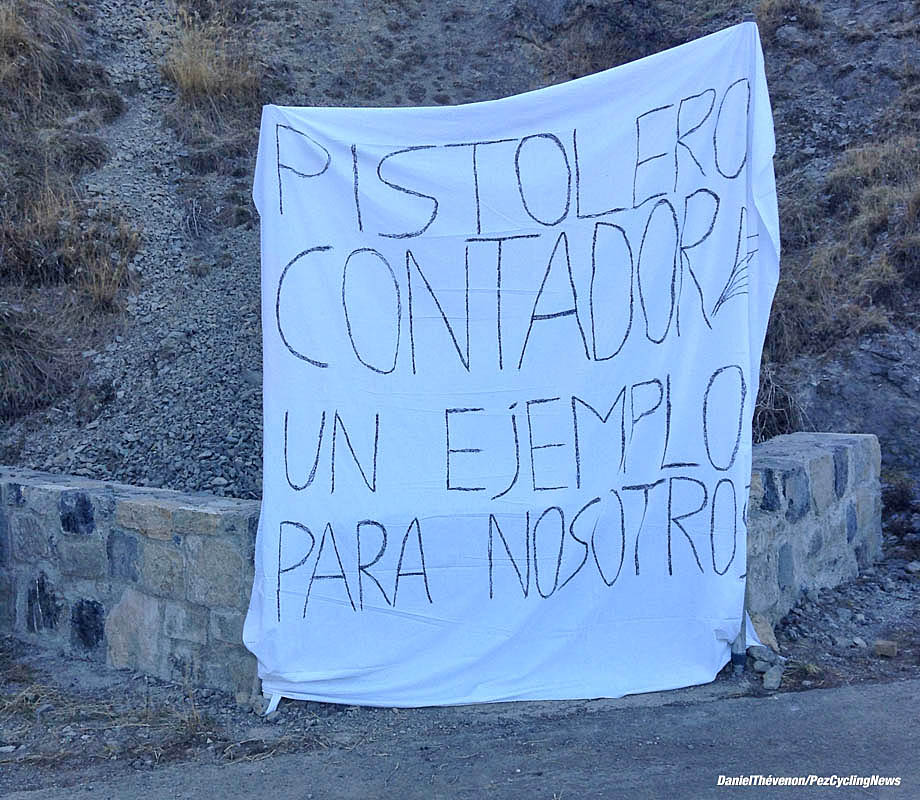 At the summit, spectators clad in winter coats receive news of the latest developments in the race. Australia’s Richie Porte has pulled clear of the pack and is eyeing victory for BMC. 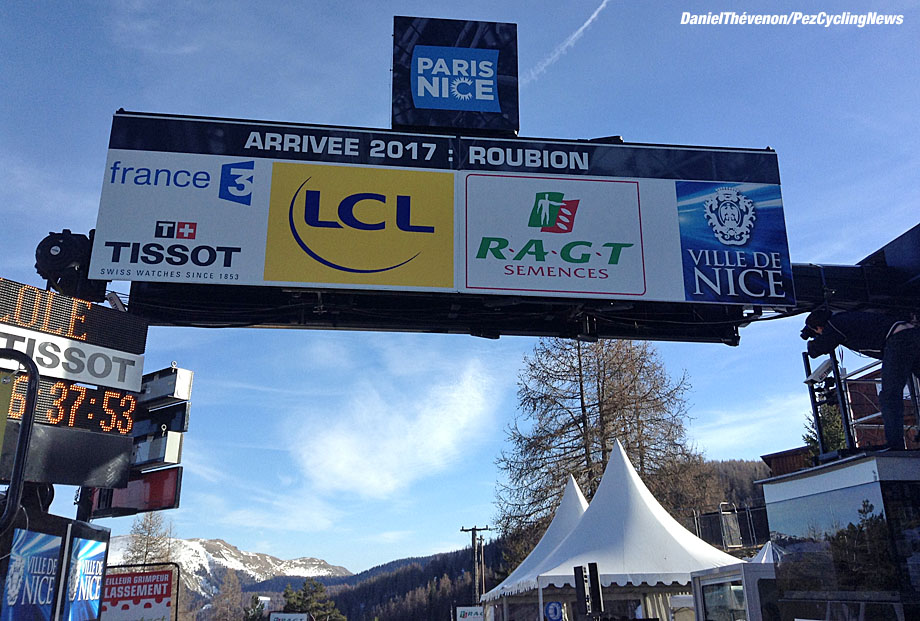 Alaphilippe races to the line but he is too late: the yellow jersey is lost. 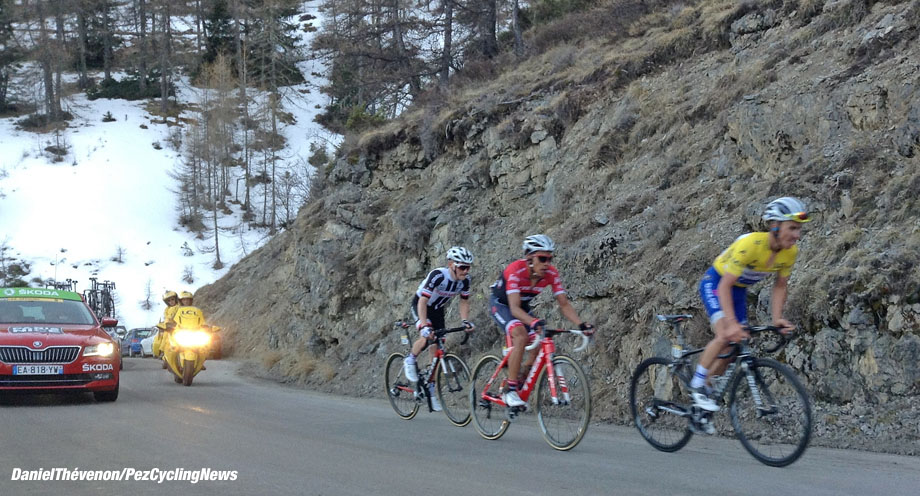 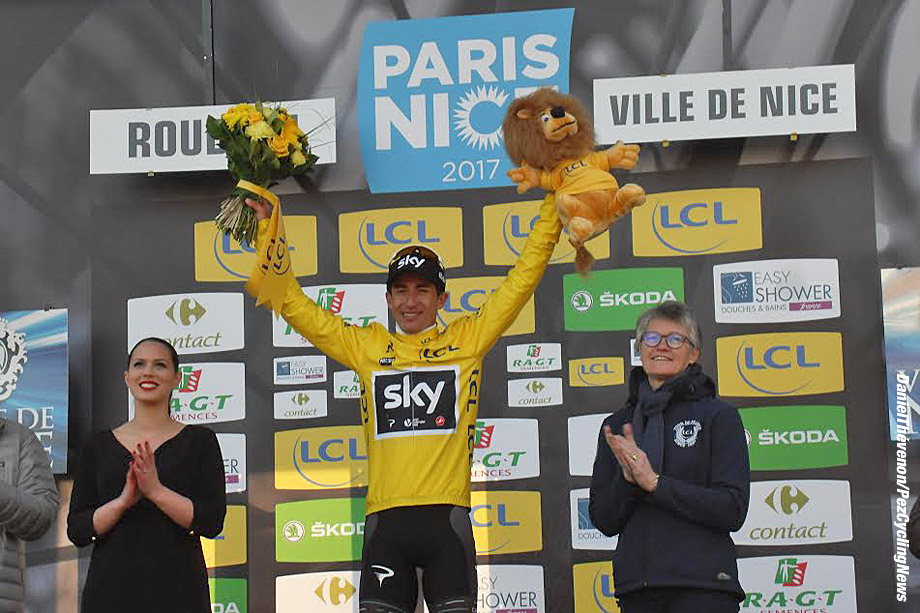 But all is not won yet. Contador has not said his last word in this race. A mere 31 seconds separate El Pistolero from the yellow jersey and tomorrow’s stage in the mountains overlooking Nice should prove riveting, much like last year’s high-octane finale. 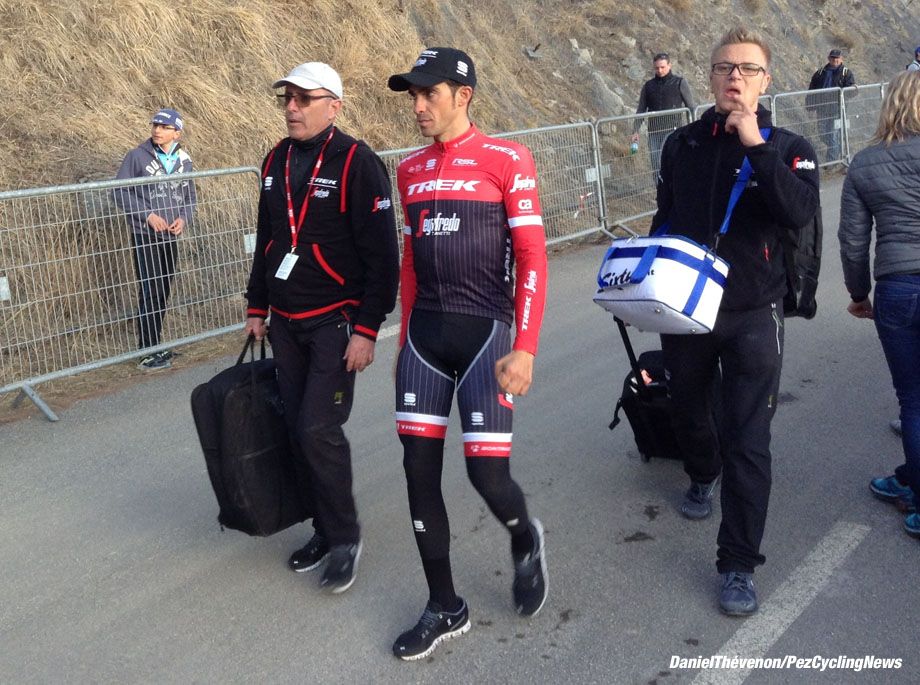 A soigneur for team AG2R-La Mondiale commiserates with Axel Domont after the finish. The young Frenchman could not hold on to his polka dot jersey and cracked in the final climb. 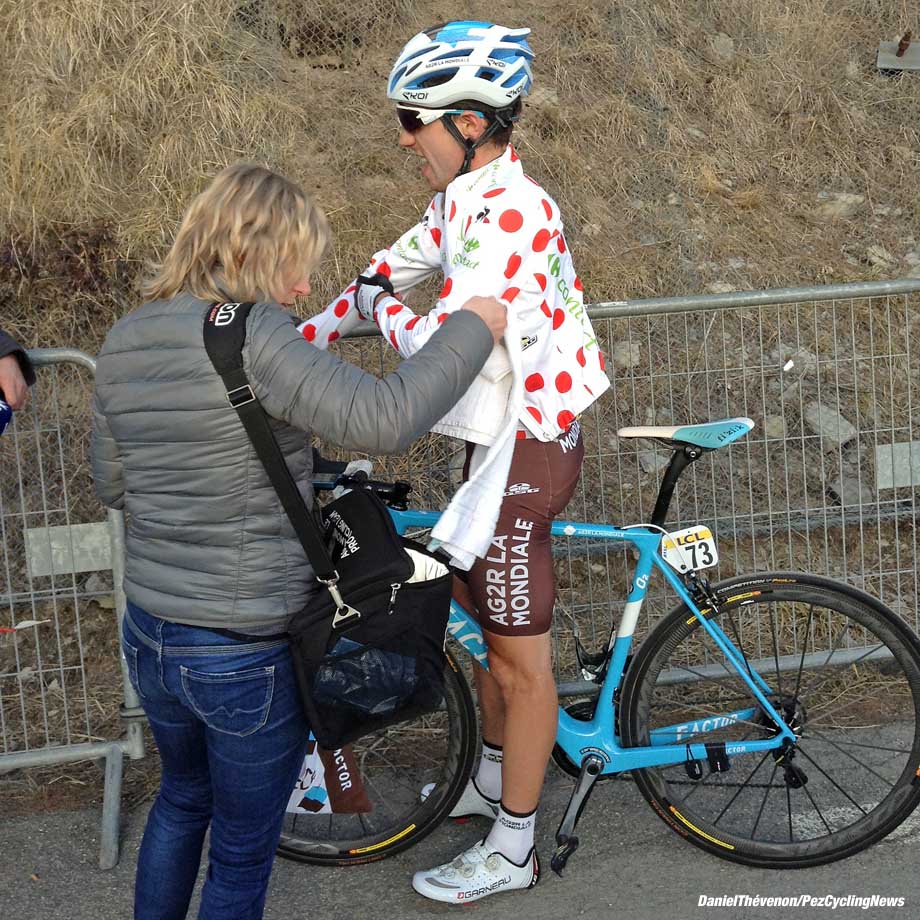 His compatriot Lilian Calmejane, a member of the Direct Energie stable, replaces him at the top of the King of the Mountains rankings. Calmejane, a stage winner at last year’s Vuelta a España, broke away from the peloton early and picked up points at the crest of the day’s previous cols. 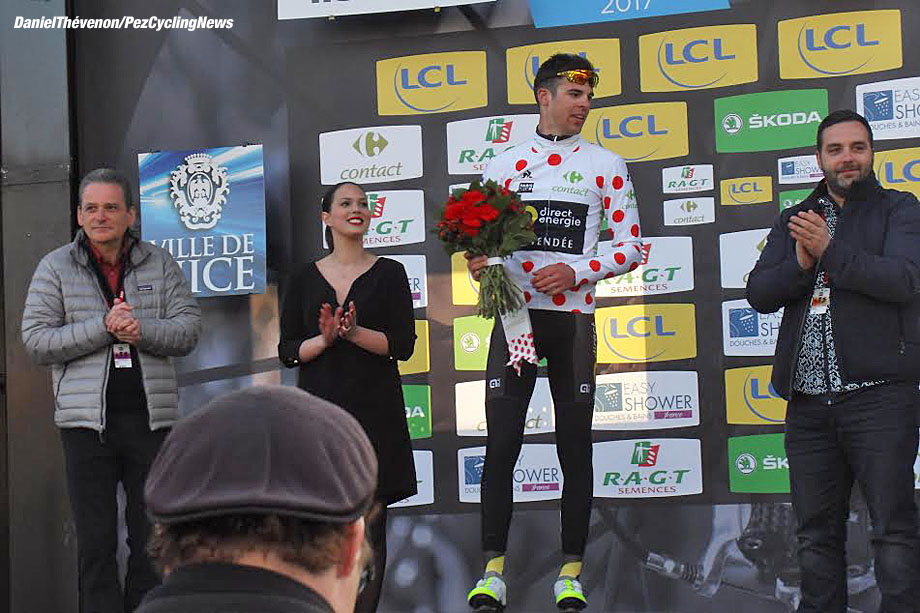 Long after Porte has crossed the line, groups of delayed riders continue to reach the summit, exhausted after a hard day in the saddle. 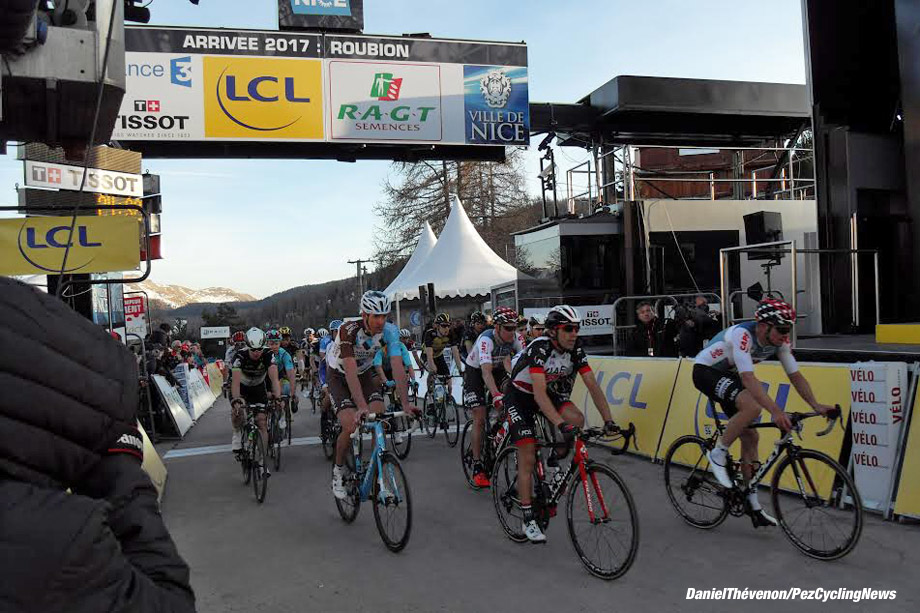 The strain certainly shows on these Quick Step Floors riders. 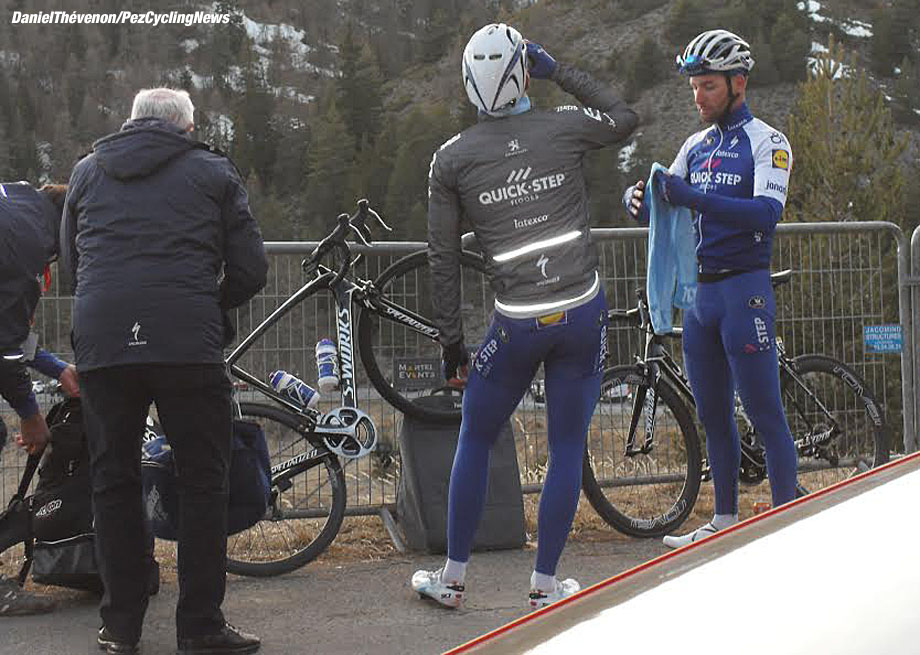 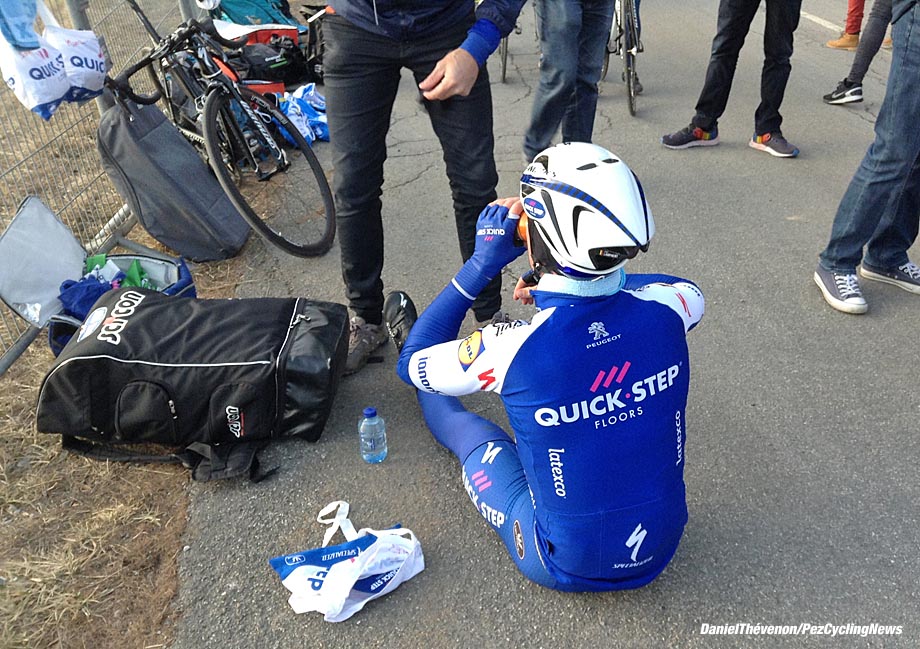 Katusha’s Tony Martin seeks some warmth at the summit. 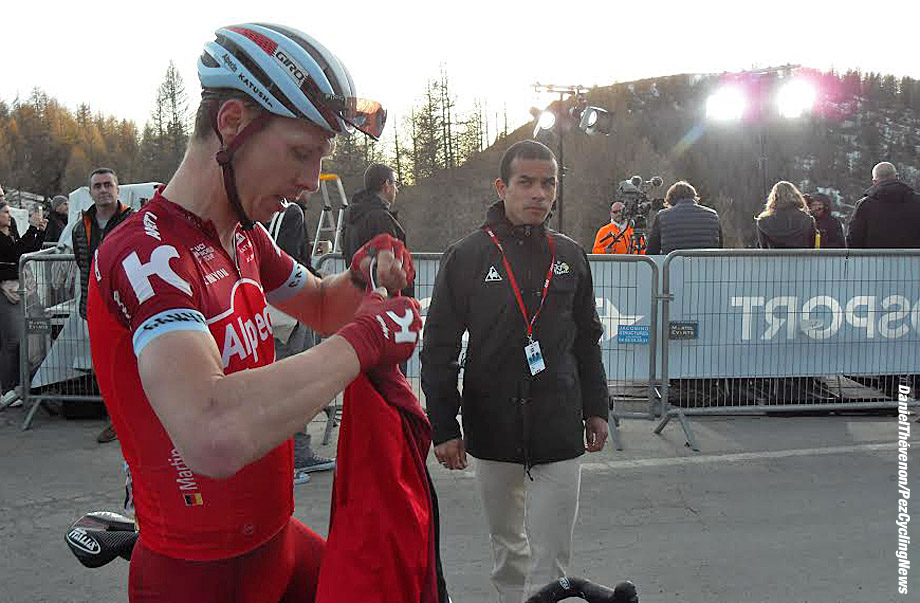 Jakob Fuglsang, the leader of Astana, answers the questions of a journalist after the grueling stage. The Dane was very much on song today, finishing sixth at the top of the Col de la Couillole. 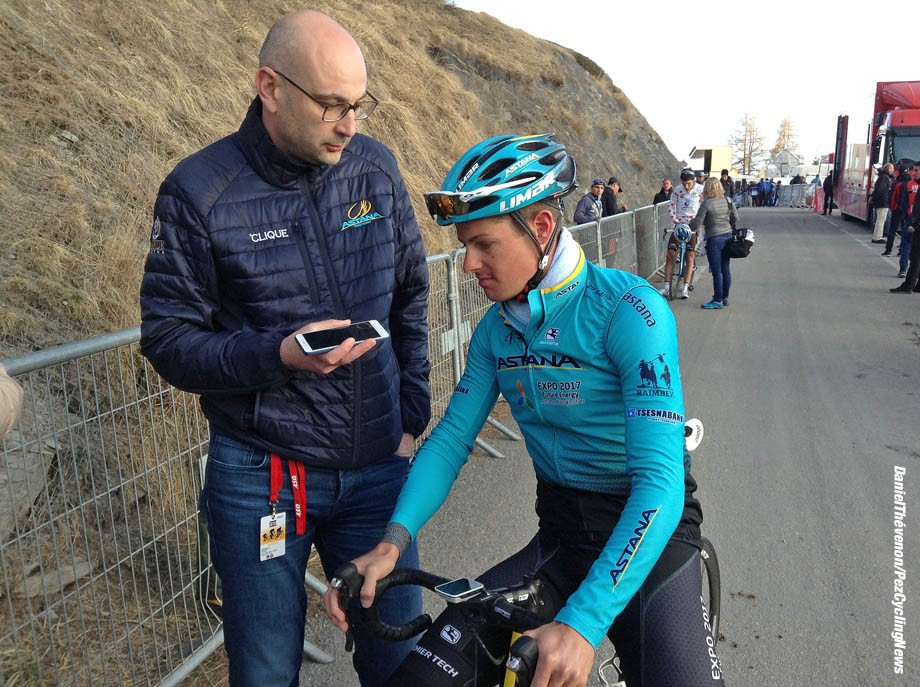 The soigneurs of Team Sky have prepared these musettes for their riders to pick up as they arrive after cutting the line. Germany’s Christian Knees and Spain’s David Garcia Lopez are grateful. 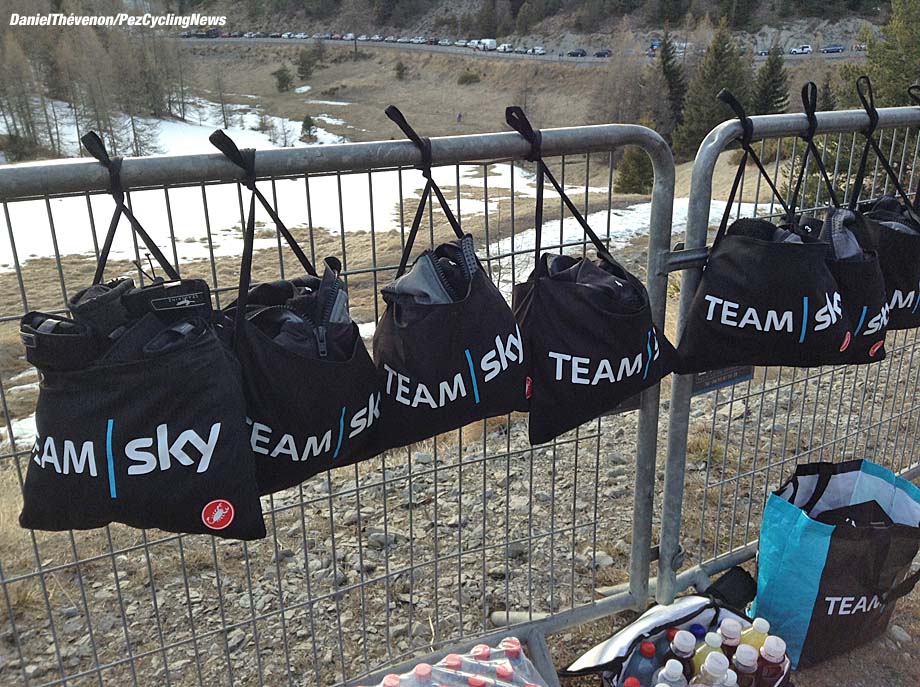 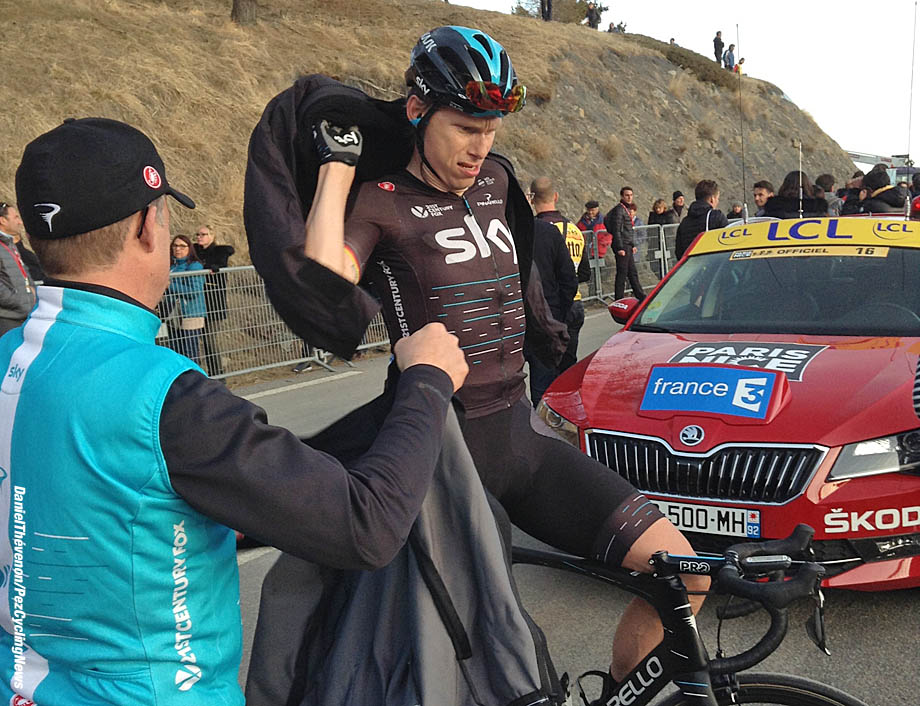 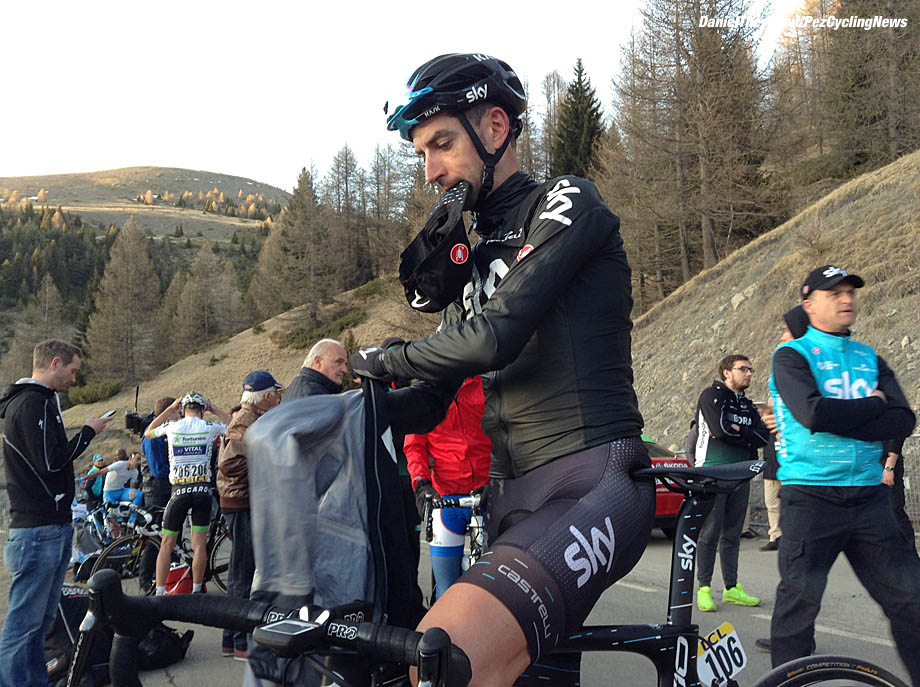 The Québecois rider Antoine Duchesne speaks to journalists after cutting the line. Fatigue is etched onto the face of last year’s King of the Mountains. 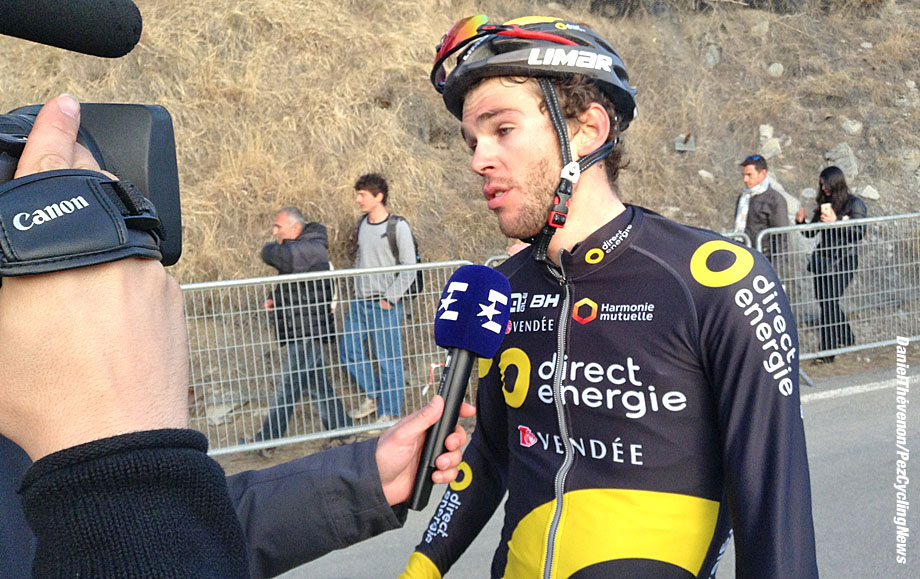 André Greipel prepares to pull on some arm warmers at the finish of the stage. The champion of Germany has insisted on finishing Paris-Nice despite the race concluding on a mountainous terrain hardly tailored to his strengths. 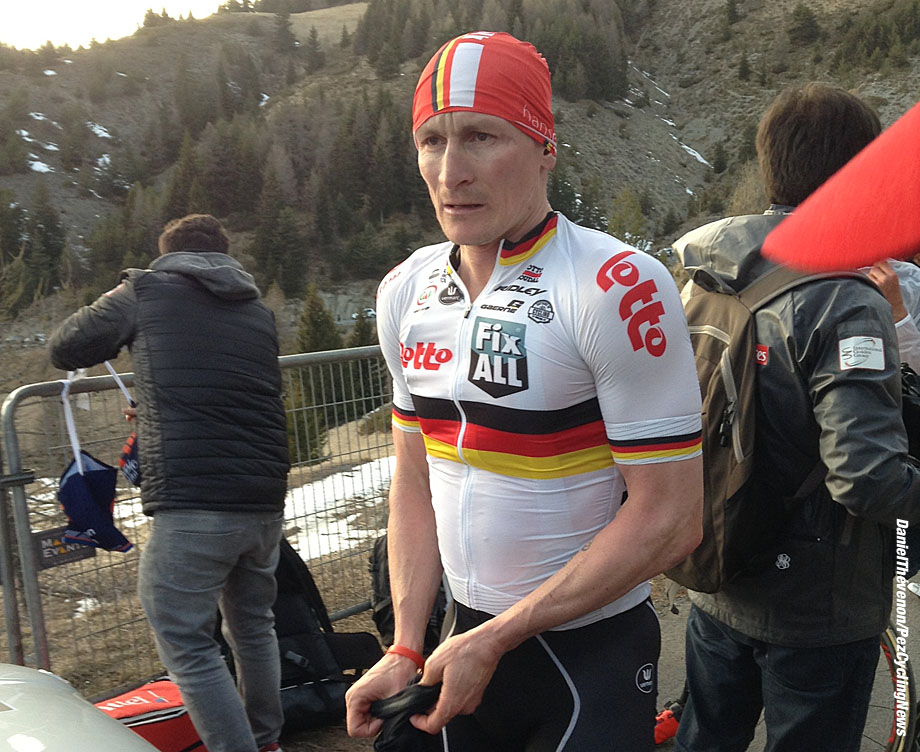 Richard Virenque, the record holder for the number of King of the Mountains prizes at the Tour de France, in his new role as a pundit on the television show “Les Rois de la Pédale” (“Kings of the Pedal”). 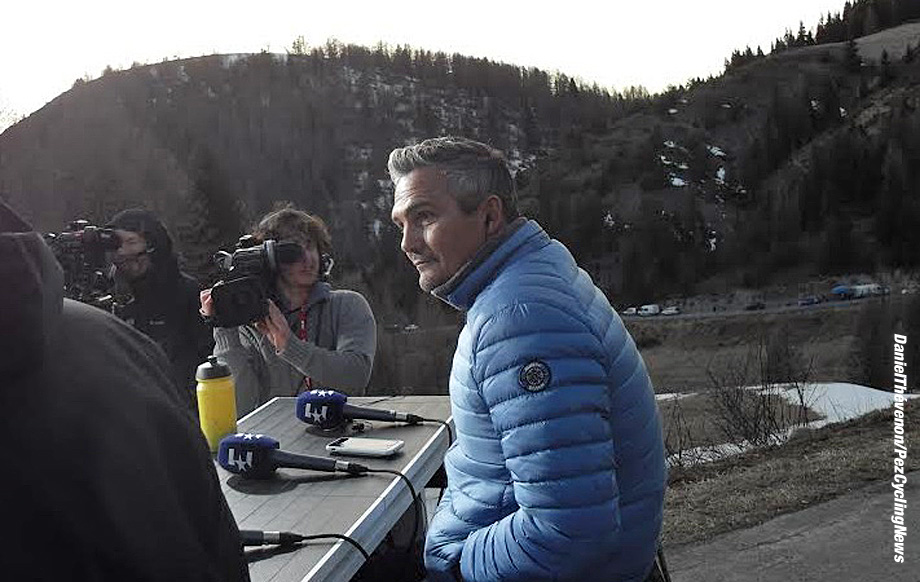 In the evening, at the Servotel inn in Castagniers, the mechanics of the Astana formation attend to the bikes. They work into the night, even as the athletes sleep ahead of another mountain stage tomorrow. 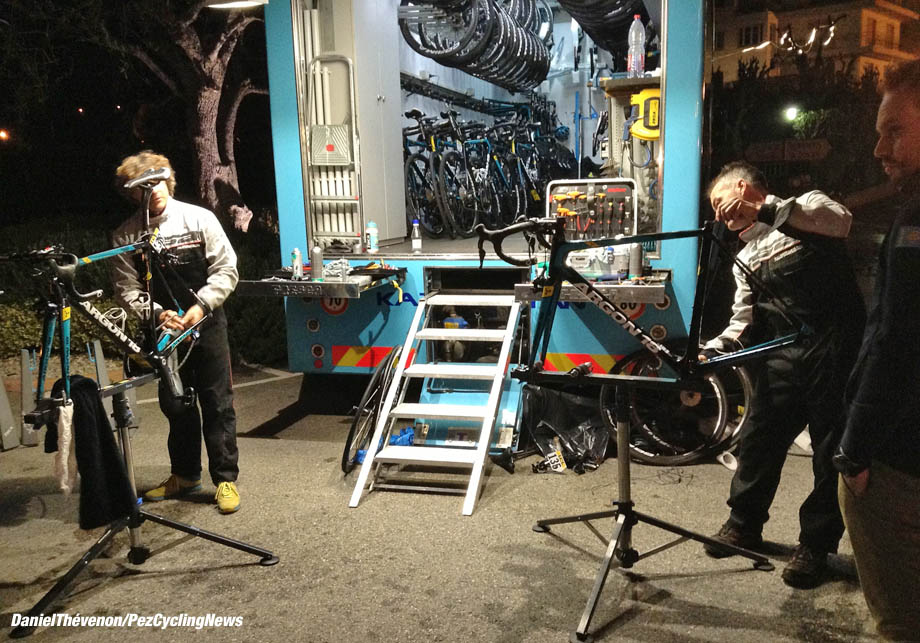 # Keep tunes to PEZ for Daniel’s final ‘Roadside’ from Nice and you can catch up with all the news and video from the French stage race in EUROTRASH Monday. #