Roadside PEZ: The opening weekend of the Spring Classics would not be the same without the presence of Ed Hood, and 2019 will be no different as Ed will be in Belgium next Saturday. The last time Ed rounded up his posse was in 2017 to take to the kasseien, to witness the carnage and the beer. Het Nieuwsblad’17 Roadside.

# Stay tuned for the Het Nieuwsblad and Kuurne preview and Ed Roadside 2019. # 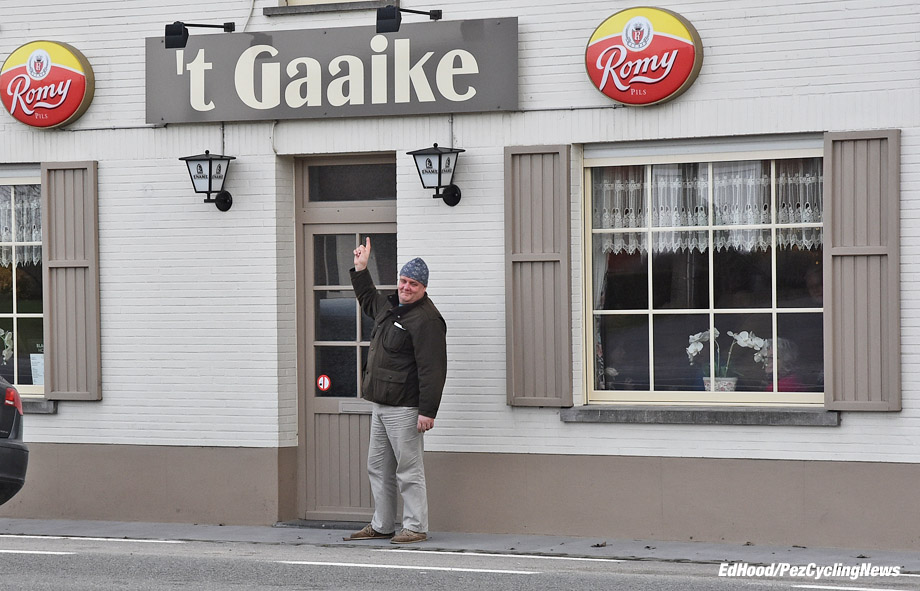 But everyone is as tired as each other and the chasers can’t make a dent in the three escapees margin. With 10K to go the fire goes out of the chasers as they begin to think about those precious World Tour points and Kuurne, tomorrow. The lead goes out to a minute; it’s going to be a quality podium.

Vanmarcke makes the first move, Sagan reacts, then GVA – the Olympic Champion opens a big gap in a trice. Sagan can’t close it, Vanmarcke sits up two wins in two years for GVA; another second place for Sagan and another place of honour for Vanmarcke – a podium of real quality after a hard race on a bright but cold and windy day. We applaud with the locals, pay the bill and head for the car – another Gent-Gent in our ‘experiences bag’. 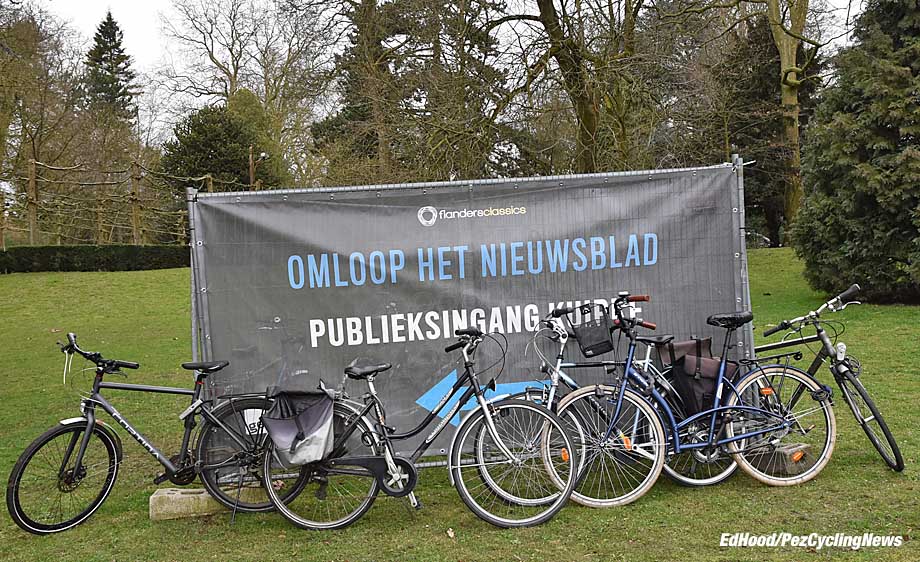 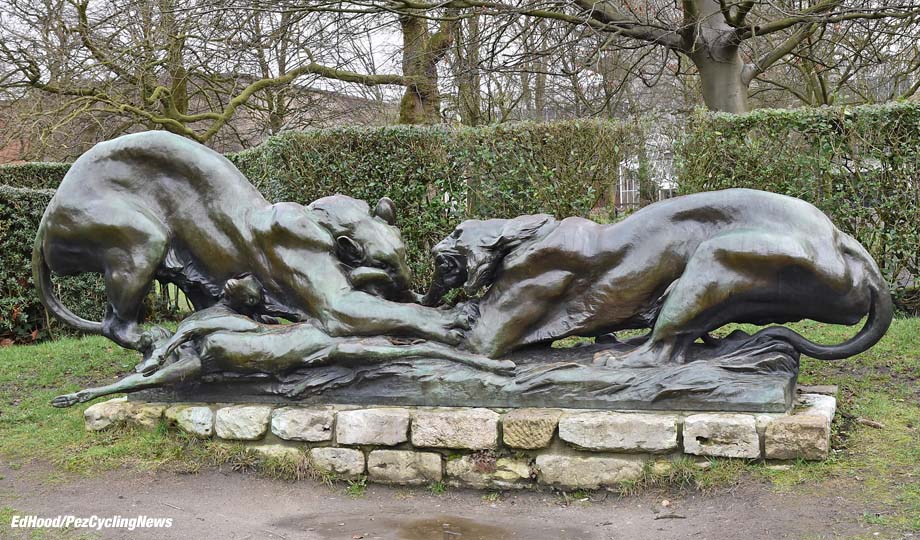 In the grounds of the Park, wherein sits the Kuipke Velodrome, a bronze of two wild beasts tear apart the carcass of a hapless creature which has crossed their path. A metaphor for the Belgians and Sagan fighting over today’s victory? Let’s hope so.

Het Nieuwsblad is World Tour for 2017 – and it shows; advertising everywhere, huge crowds, barriers and a sign-on inside the Kuipke velodrome. Progress? Maybe – but not if you’re ‘old school,’ used to getting up close to the bikes and being able to chat to riders, who now of course hide in their mega buses, venturing out only to sign on and go to the start it’s all a tad glitzy, rough edges smoothed off. Anyway, time to have a look at the hardware. We’ve been told that Direct Energie and Cofidis are on the new FSA electronic derailleurs – nope. 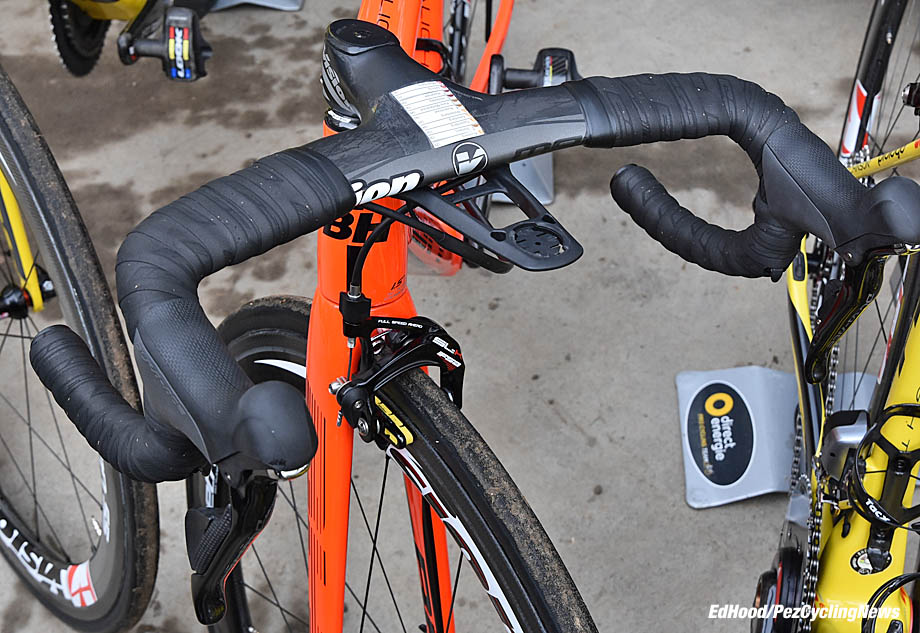 Shimano Di2 all round, but nice FSA brakes and Vision integrated bars/stem on Coquard’s machine. 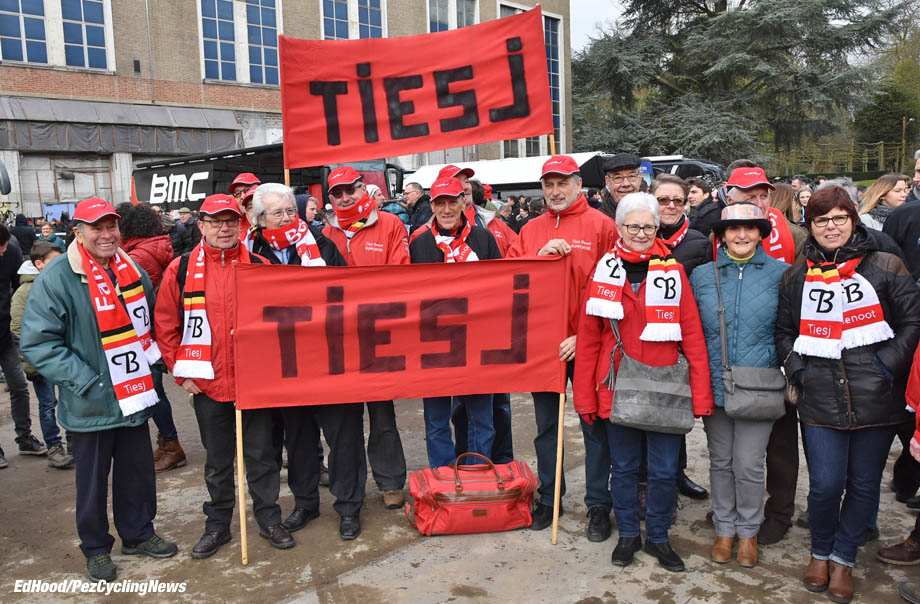 Meanwhile the Tiesj Benoot fan club is out in force, the precocious Belgian was third last year and is hungry for that first big win. 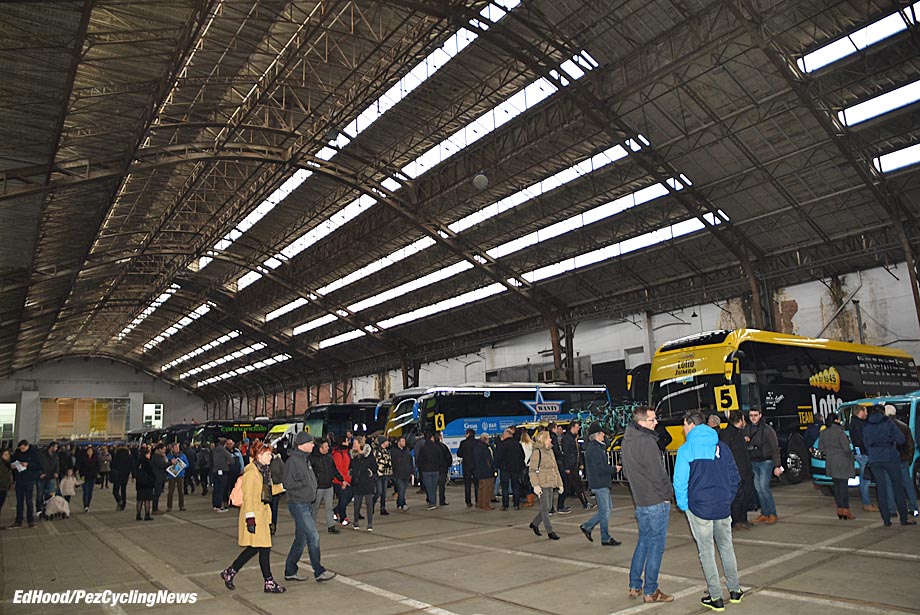 Half of the teams are parked up outside the velodrome with the rest inside the huge exhibition hall built back in the 30’s. 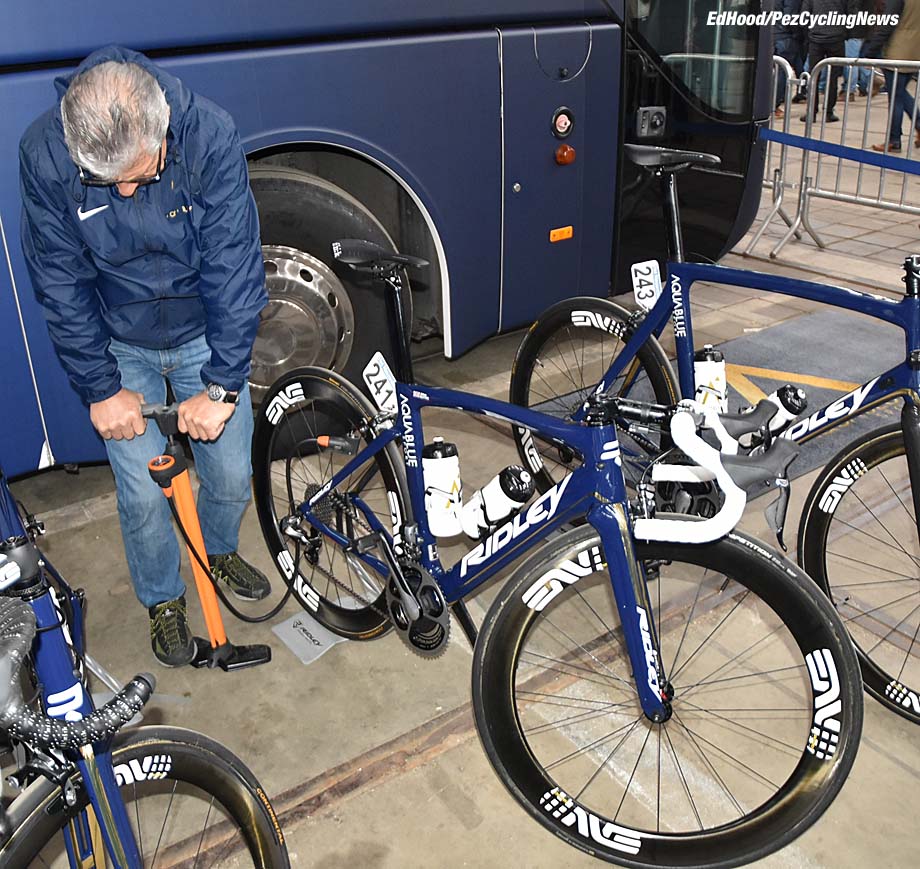 Out of that cold wind we like the new Aqua Blue pro-conti team’s dark blue Ridleys – British Champion, Adam Blyth’s machine get its tires topped up. The teams are presented inside the velodrome, we don’t linger, too hot and too many people. 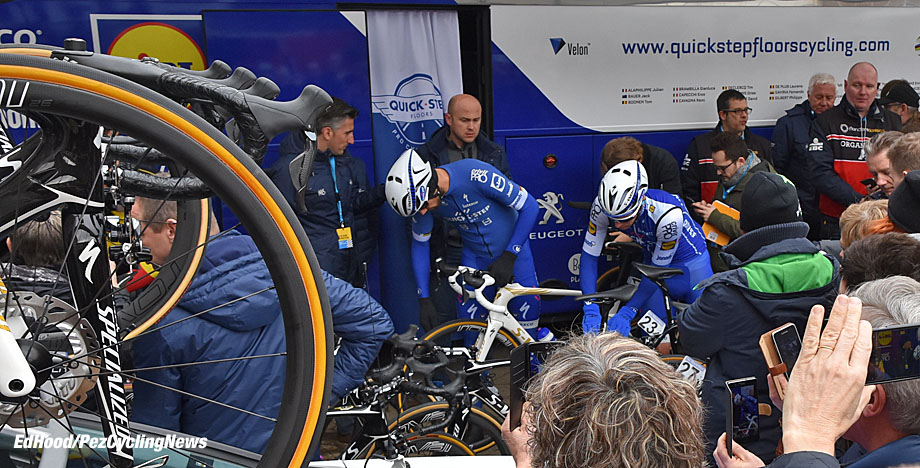 The Quick-Step bus, and if you have any doubts about Tom Boonen’s position in the firmament of Belgian cycling they’re dispelled by the sea of people around the team bus, all clamouring for a glimpse of the great man. 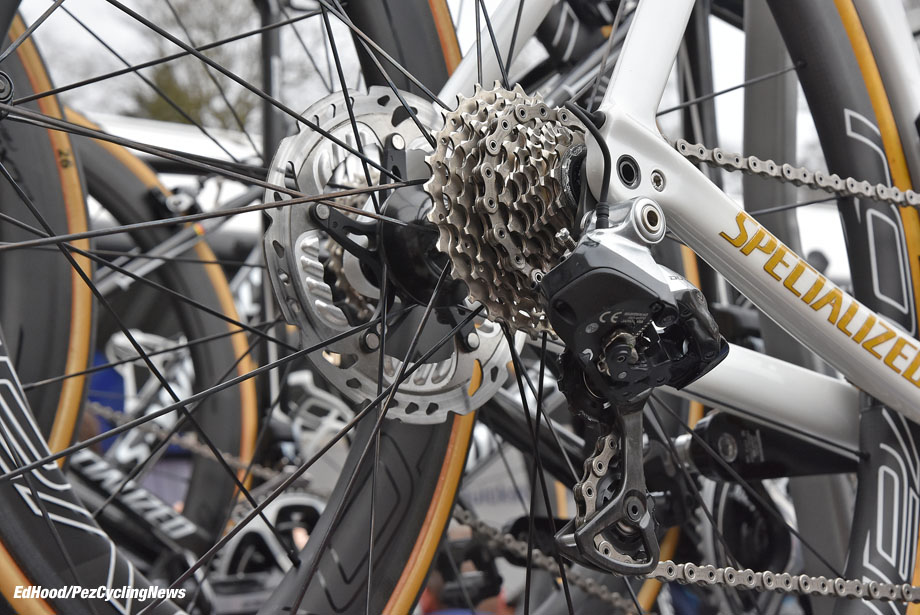 Meanwhile, Dave tests the edge of the brake rotors on Tom’s spare bike – yes, that would slice your hand off nicely. 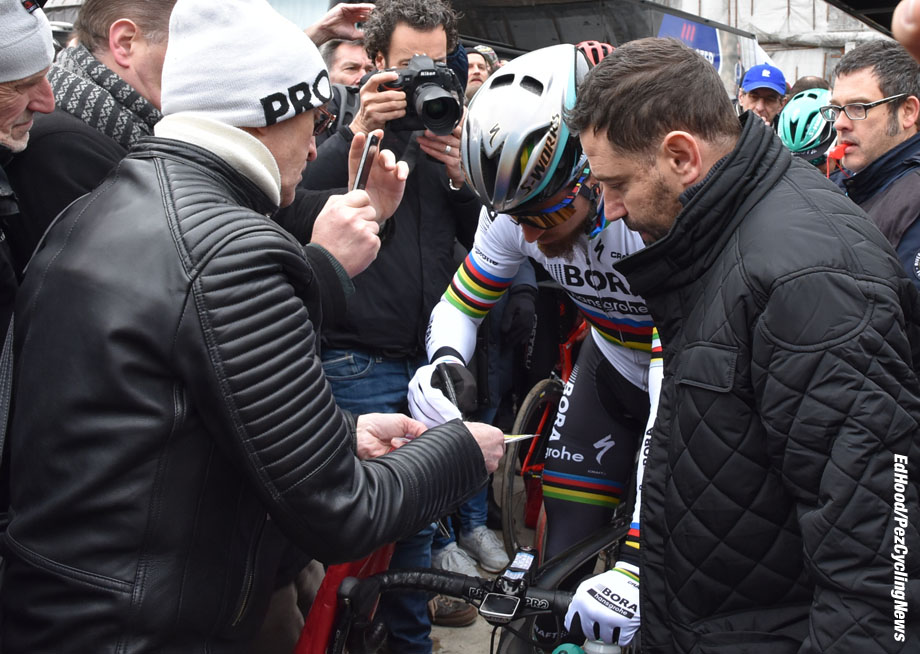 Time to head for the car; and rivaling the throng around Tommeke is that around double World Champion, Peter Sagan – the race stewards have to clear a path for him to get away from the bus. Oosterzele and our first siting, it’s compatto and very cold, an icy wind slicing in from the right. 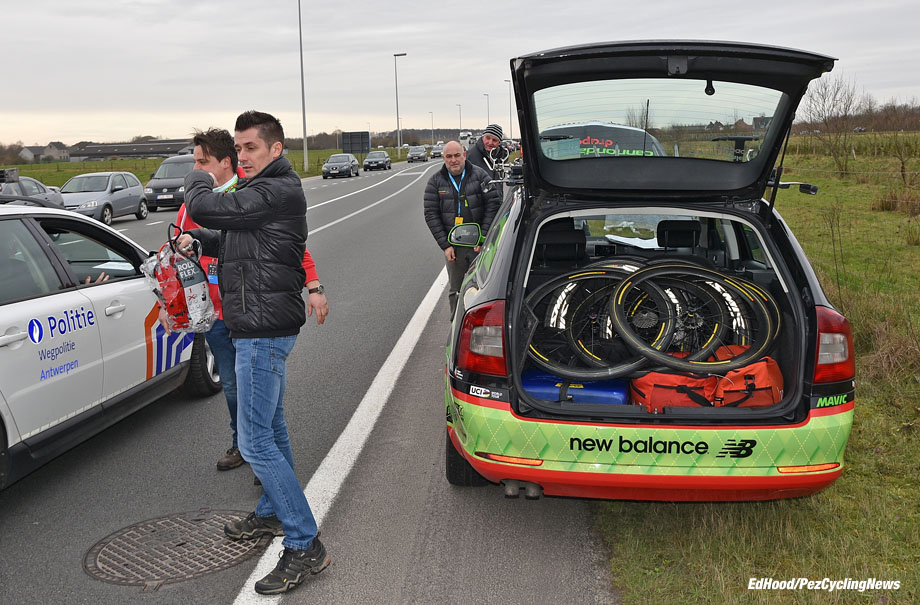 The main excitement is that the Cannondale-Drapac car has a flat battery and the staff are jumping out into the traffic flow, waving jump leads optimistically. The top of Leberg, the first hill of the day, two are clear, an AG2R-La Mondiale and a Veranclassic but just by seconds, then a cluster, then a long, long line whipped along by a strong icy tail wind. 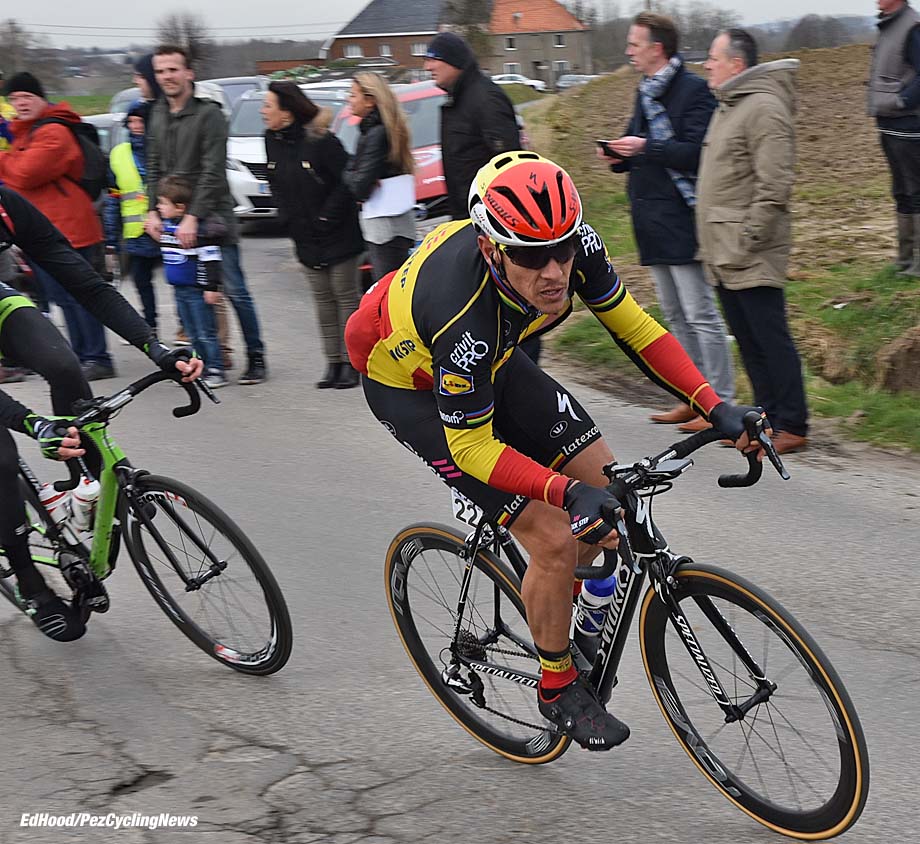 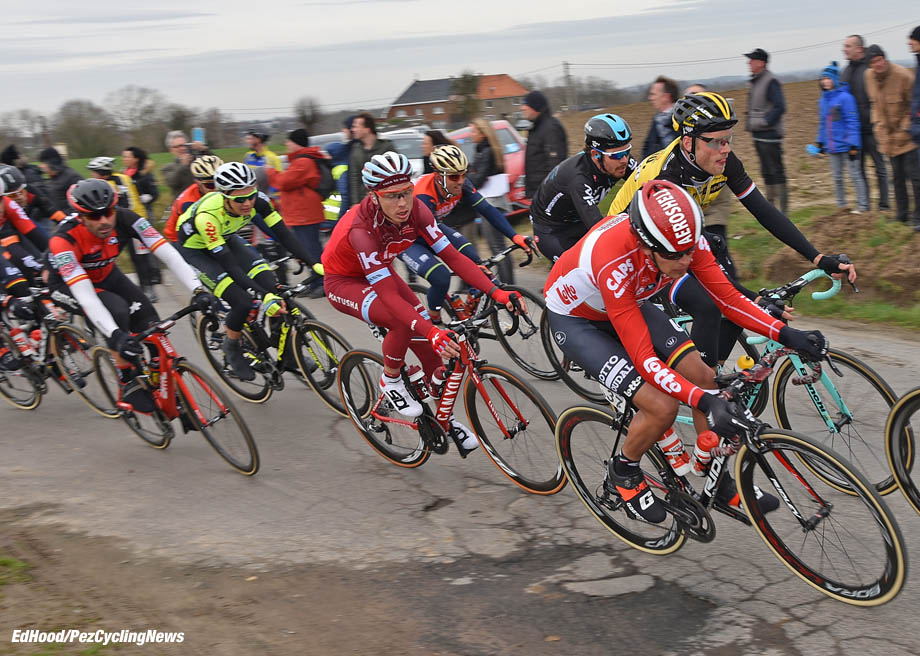 Gilbert is easy to pick out in his Belgian champion’s kit and strange to see Tony Martin in Katusha-Alpecin livery. 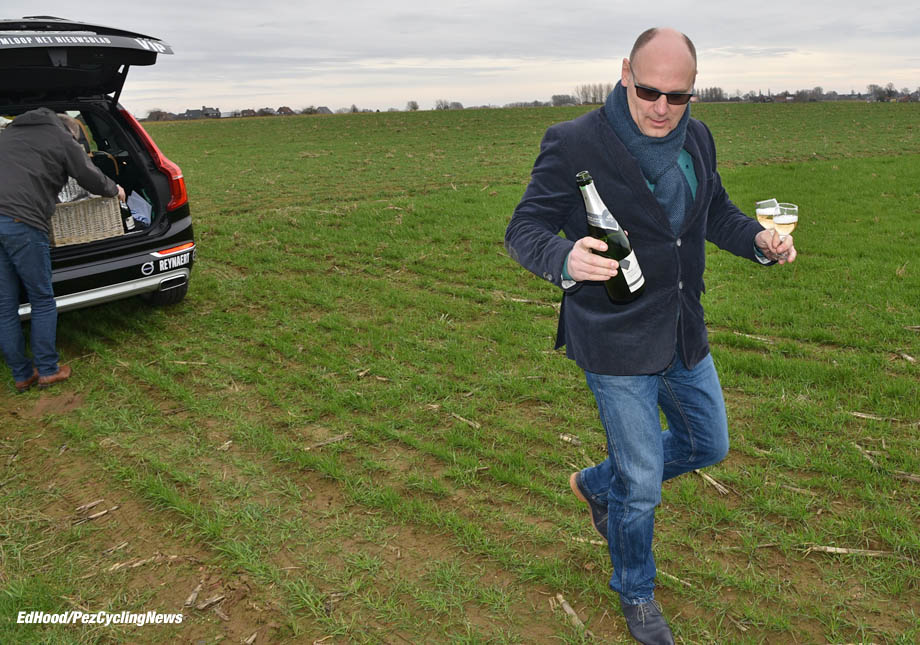 The ViP’s are well into their champers and nibbles so don’t notice Gilbert or how damn cold it is. 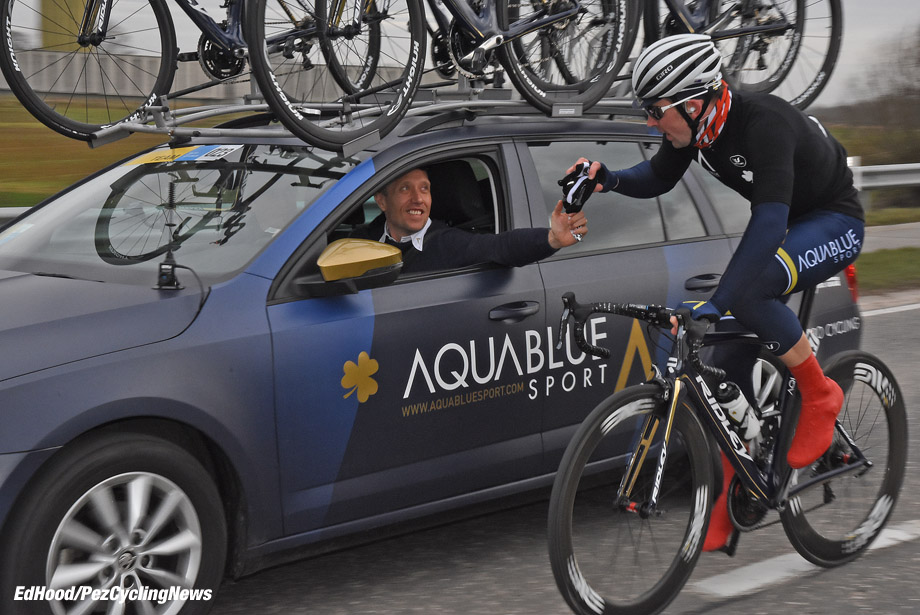 Valkenberg, half distance and we have five riders with seven minutes plus on the peloton; meanwhile Leigh Howard (Aqua Blue Sport) is in no man’s land trying to get across – rather him than me. 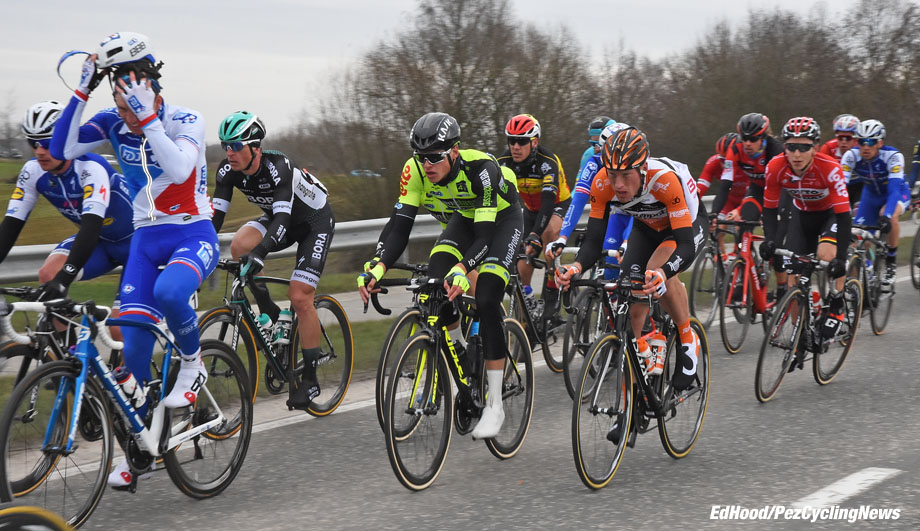 It’s full on now with few in the peloton looking relaxed. It only takes us 10 minutes to get to Zegelsem at 108K – we miss the break but catch the bunch which has split in two. 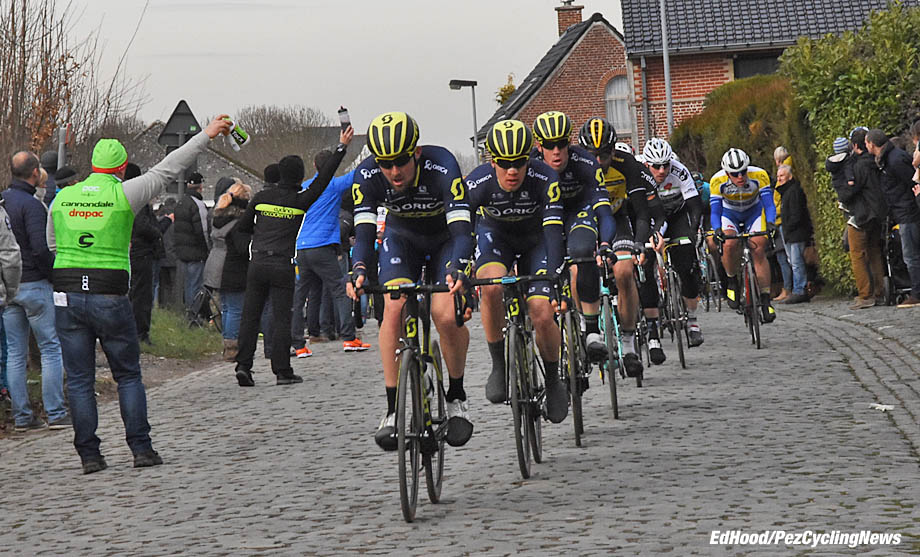 Orica-Scott are working hard at the head of the second group – for Keukeleire or maybe Cort? There’s a bit of sunshine now so it’s going to stay dry – but when you’re out of the shelter of the villages that wind is icy. 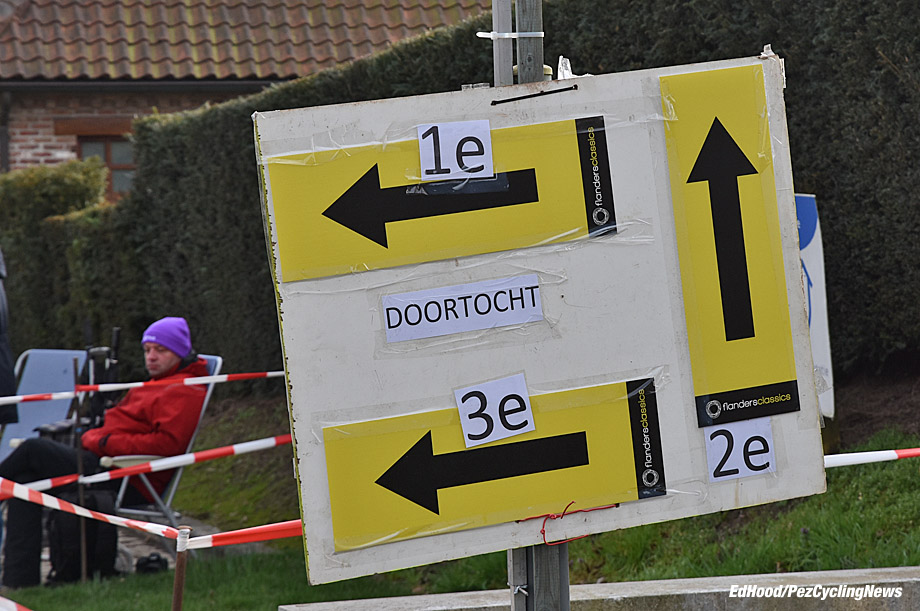 A burger then we hike along the cobbled Haaghoek which the race will traverse for the third time; there’s a tribune been set up with television screens. 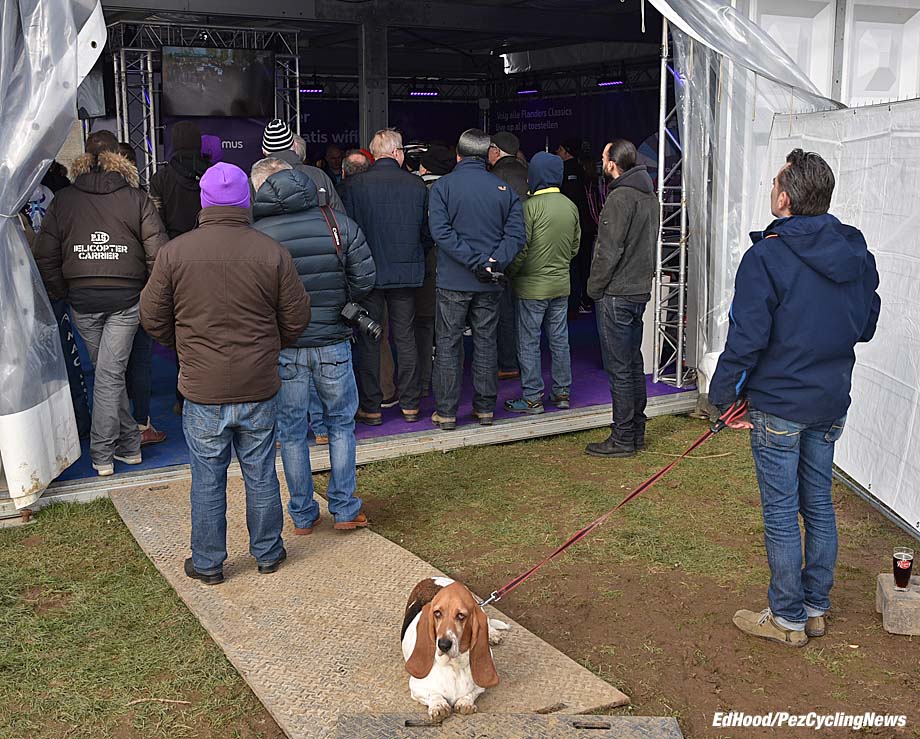 Everyone is jostling for position to catch best sight of the screens – except Fred Bassett who’s wondering when he can go home. The break’s seven minute advantage is shrinking rapidly as a Sagan inspired group of six including GVA, Naesens (AG2R-La Mondiale), Vanmarcke and the surprising track man, Thomas Boudat (Direct Energie) closes them down. But in turn the sextet only have 25 seconds on another, larger chase group. Time to head outside. . . Perfect timing. 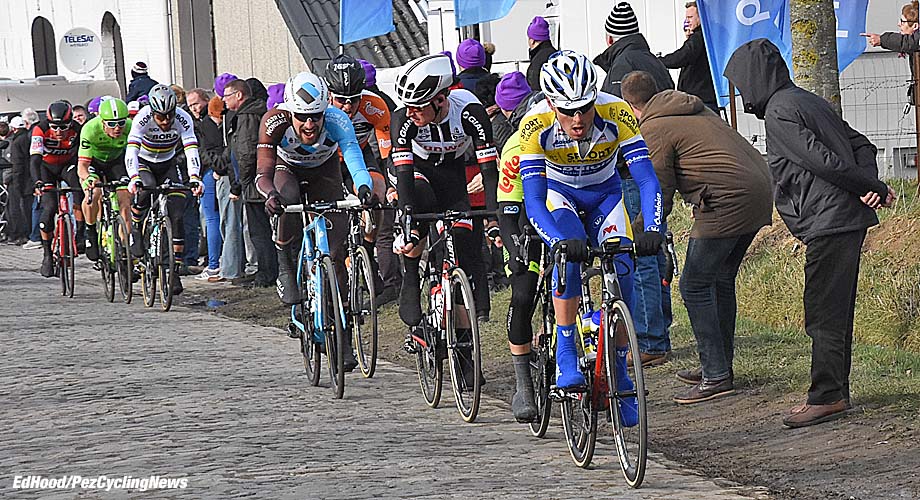 Sagan is dragging GVA and Sep Vanmarcke across to the break and the junction is being made right in front of us. Next up walk back to the car: the field is split to pieces and spread over many minutes with riders passing us in ones, two’s and little groups – there’s no chat or laughter to be heard, just the clatter of deep section rims on cobbles. 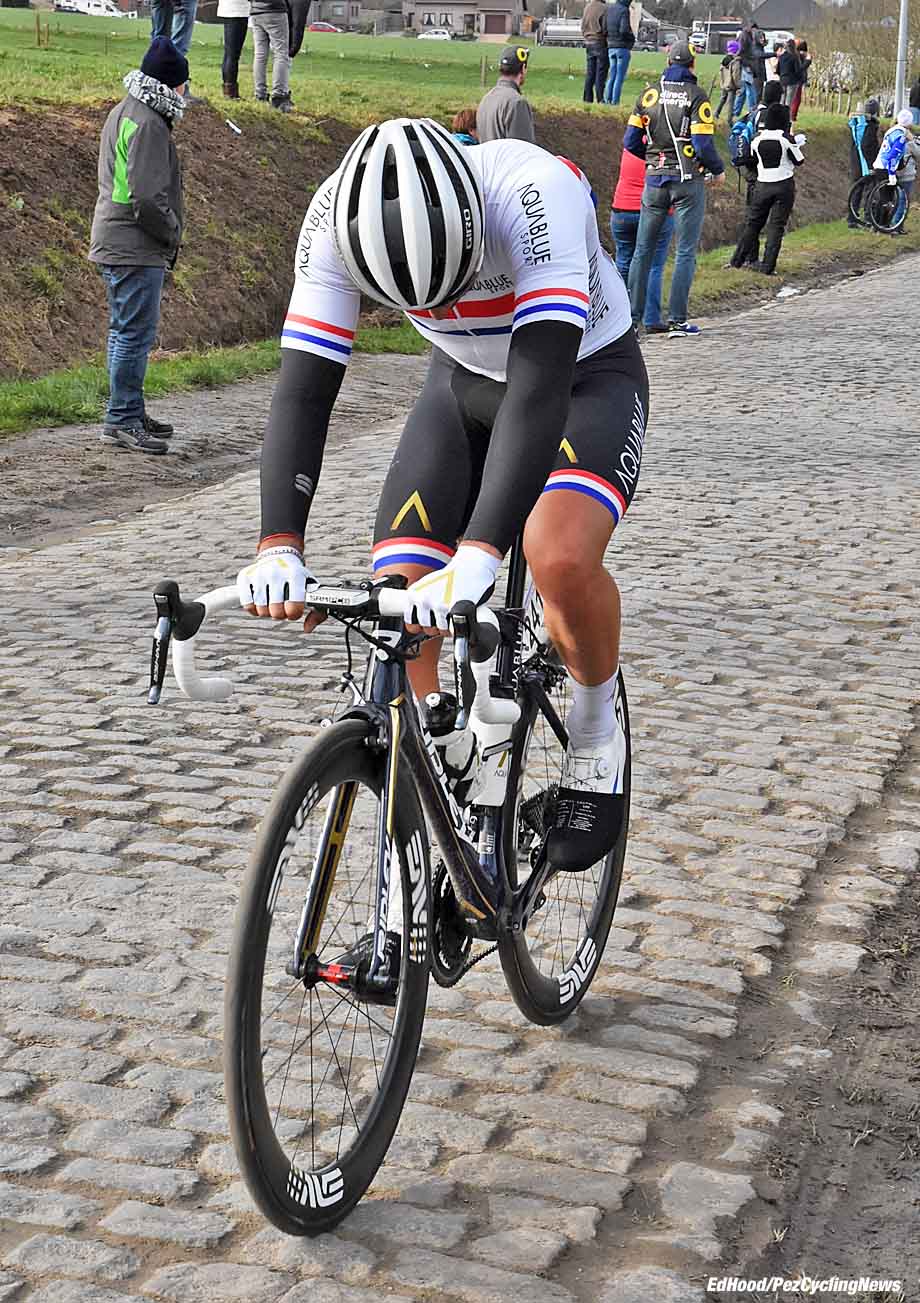 British Champion, Adam Blyth isn’t on his best day – but few are in this cold with the wind slicing in off the maize fields. Much as we love standing roadside, the best way to watch the finale is on TV in a bar – no pils though, it’s too cold for Jupiler today. GVA’s win meets with much approval in the bar – a happy ending is always good, better than the stunned silence which came with Stannard’s wins. 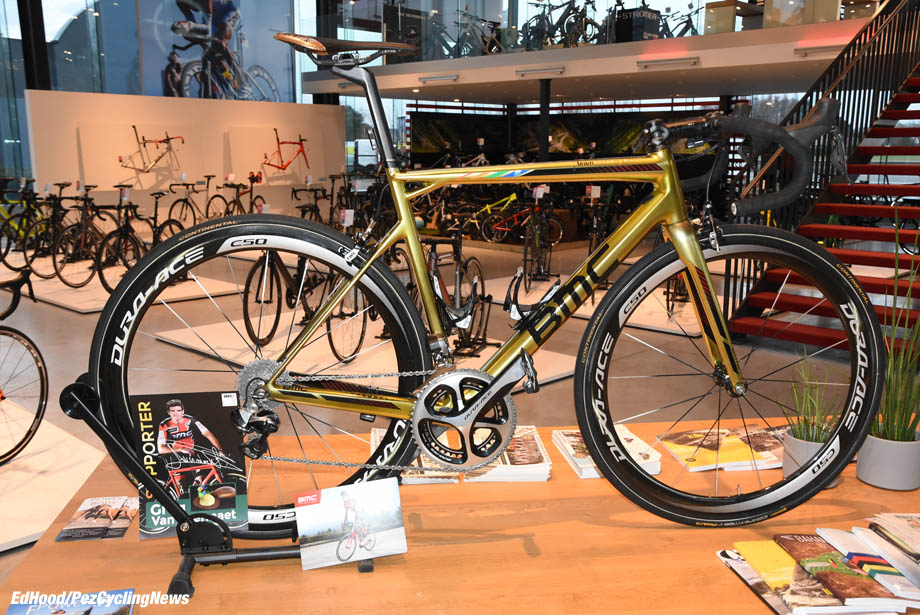 On the way back to our digs in Ghent we have rituals to perform – visiting the BMC superstore seems appropriate, homage to GVA and stand quietly beside his gold Olympic ‘tribute’ bike. And of course, we have to go down the Holiday Inn to look at the team bikes. Being a pro team mechanic always seems so cool when they’re making those final adjustments to the bikes at the start of some sunny Giro stage. 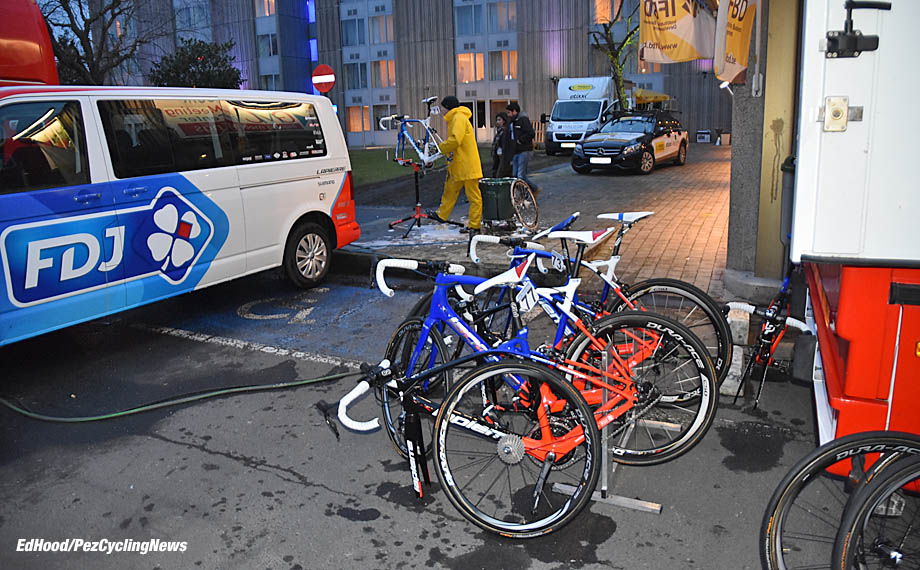 But here, with the mercury well on the way to zero and clad in oil skins to combat the spray off the jet washer, we’re glad we’re heading for a pizza. . .

# Stay tuned for the Het Nieuwsblad and Kuurne preview and Ed Roadside 2019. #