TOUR’16 Roadside: For every Batman there is a Robin and Callum MacGregor is the Robin to Ed Hood’s Batman. Callum is the PEZ Tour de France chauffeur; yes, he sees the French Grand Tour close up, rub shoulders with the stars, look at the distractions and to drive on those closed roads, but he does have a lot to put up with. Driving Miss Eddy. 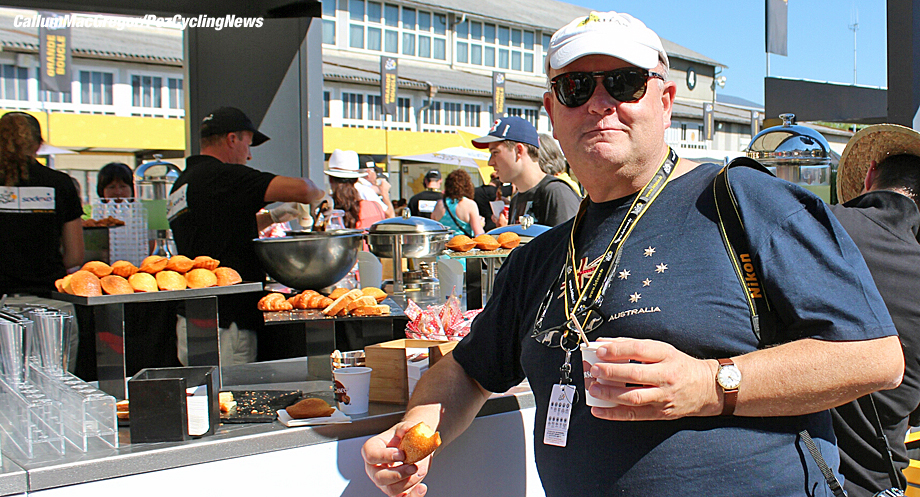 On the plane home Ed asked me to put down my thoughts on our week at the 2016 Tour de France. There’s a lot that happened and I’m not sure where to start or where to stop! I knew from the previous year driving the last week of the Tour would be a blast.

My job is to chauffeur Ed around and take some photos.

Driving a car that struggles in the mountains, often down to first gear going uphill and with traction control that decides it should take time out when I think it would be most useful, on the twisting, soaking wet decent whilst being pursued by a deranged photographer desperate to pass on single track road with no passing places and fans everywhere. 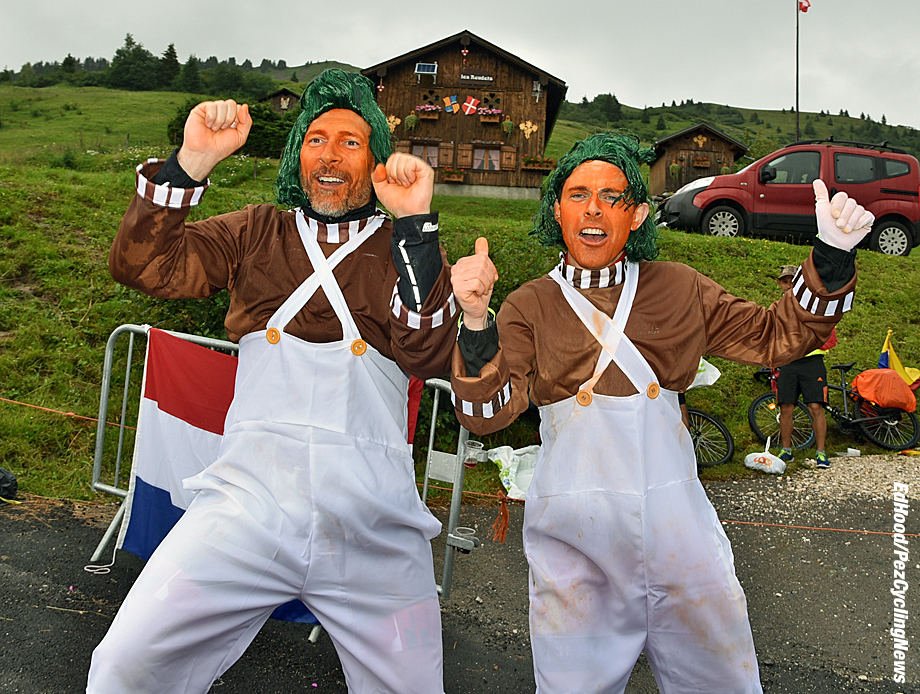 No, not Ed and Callum, but maybe next year

Every day is different, from driving the course ahead of the field, when the convoy has already been through and the thousands of roadside fans are happy to wave at any passing vehicle, even a Toyota Yaris with only press stickers to identify it, to sipping coffee in the Tour village before the start, chatting to Malcolm Elliot, three time stage winner at the Vuelta, and British cycling legend, whilst admiring all that is beautiful in the world or at least the immediate vicinity. 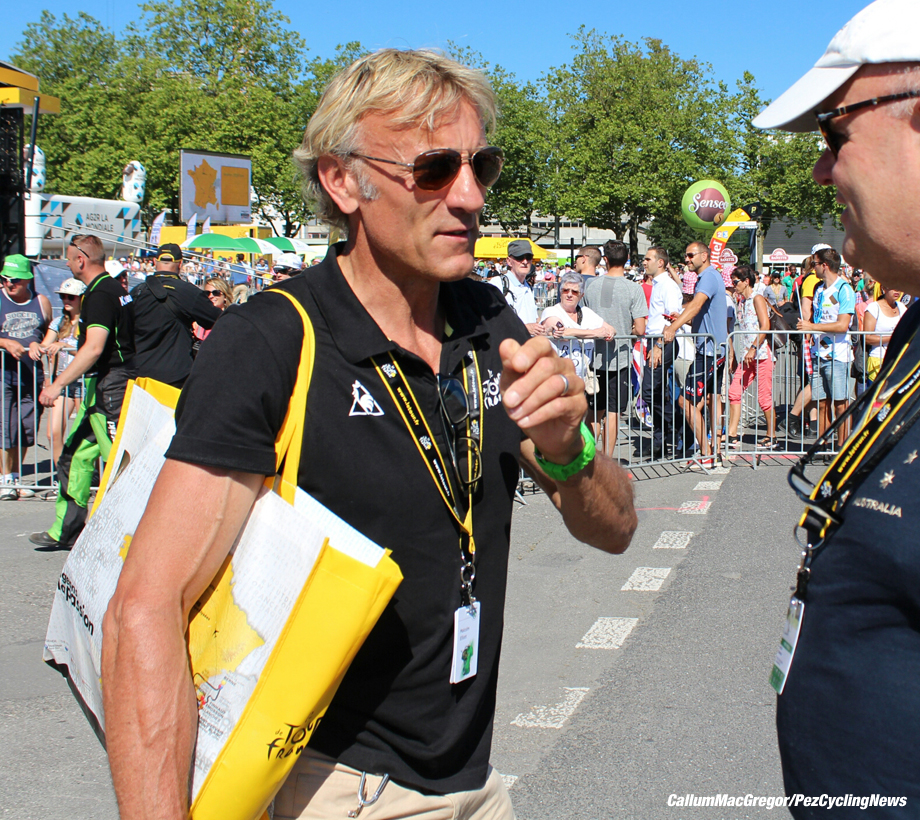 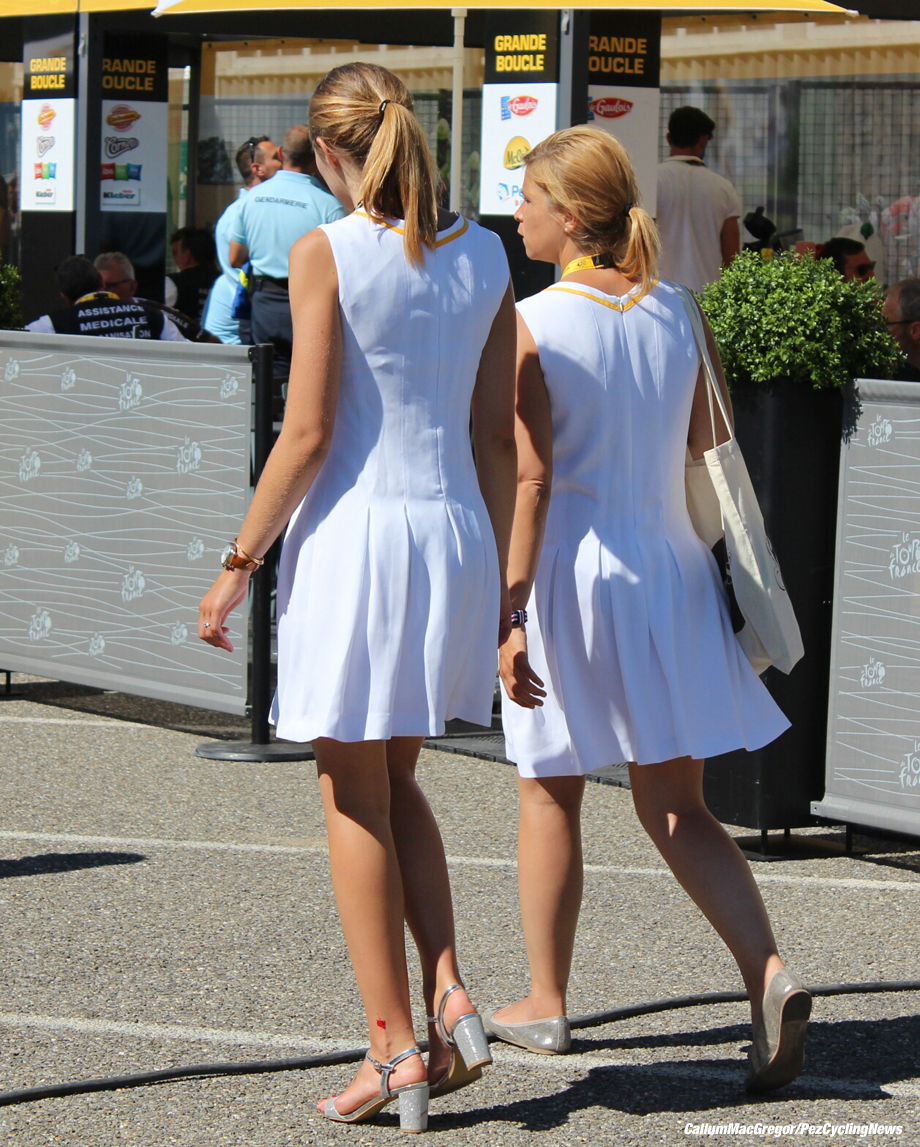 This is my second year at the Tour, on the inside, accredited. I’ve been here as a fan many times, in the mountains, at stage finishes and in Paris. I remember as a teenager in 1983 watching Hennie Kuiper and his Aernoudt-Rossin team fly past in the team time trial in Brittany. Fignon won that year I think. 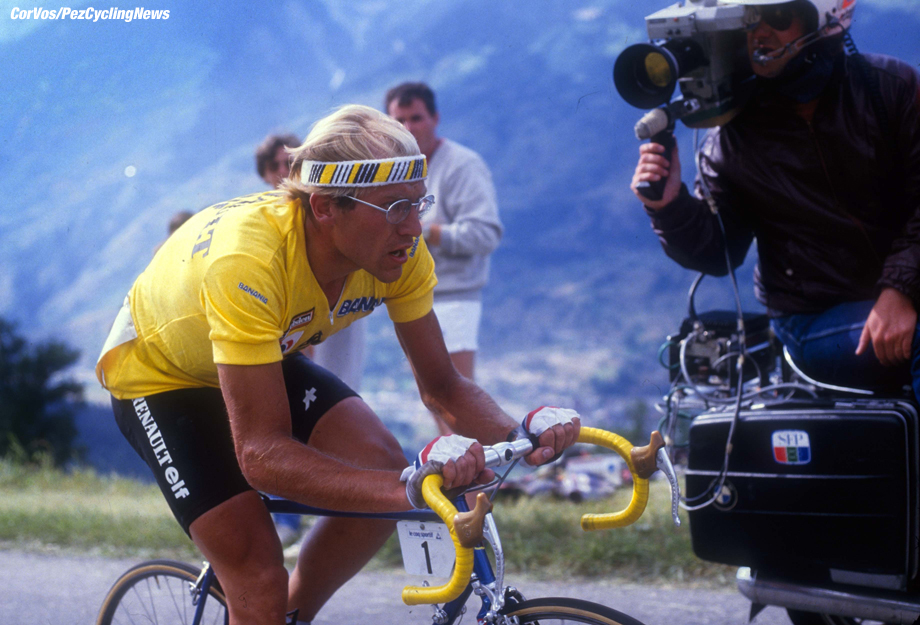 I also saw Neil Stephens winning in Colmar in 1997, rocking his baby in his arms as he crossed the line. 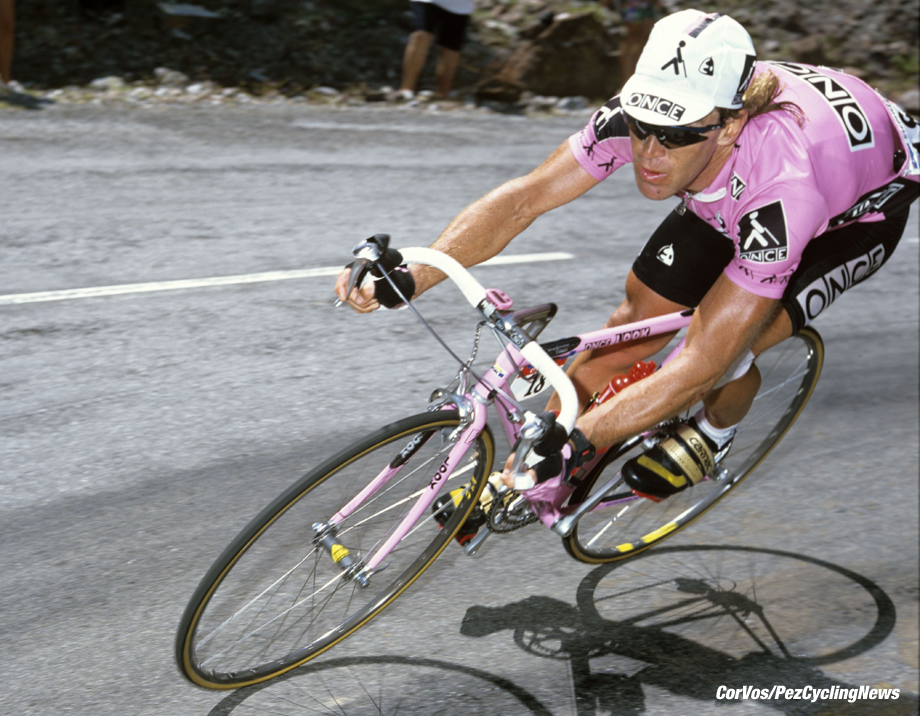 Back to the present, I have become acutely aware that at the Tour time is critical, not just for Froome et al. No genius required to work that one out I know, but when on the “inside” you always appear to be on the clock. Sometimes the clock slows down, early mornings being the relaxing time of the day. But from the point we leave the hotel to the time the lights go out at night the clock is against you.

The story and the photos have to be in before any thought of food, drink or chilling to reflect on another beautiful day on the Tour and as the evening progresses the clock accelerates and the pressure increases. What is also clear is that reporting on the Tour is a charged pressurized affair.

Photos, words, an angle for the day, getting to the village depart, getting on the course, negotiating with gendarmes and race officials, setting up interviews with riders and sponsors, finding the night’s accommodation, surviving traffic jams, getting on the end of the Tour convoy to get off a mountain, trusting sat navigation to find the place you need to be.

Oh and the eternal stressor wi-fi – will it or won’t it work, load, crash? Happy days!

Some imagine reporting is a simple task but I’d beg to differ from what I have seen. It’s been said that this year’s edition wasn’t a classic, no grand battle for the win, Froome dominating without destroying his adversaries in the mountains as he has in previous years. But every tour has a million stories and just because the headline story is not the greatest it shouldn’t detract from the beauty or the telling of all the others. 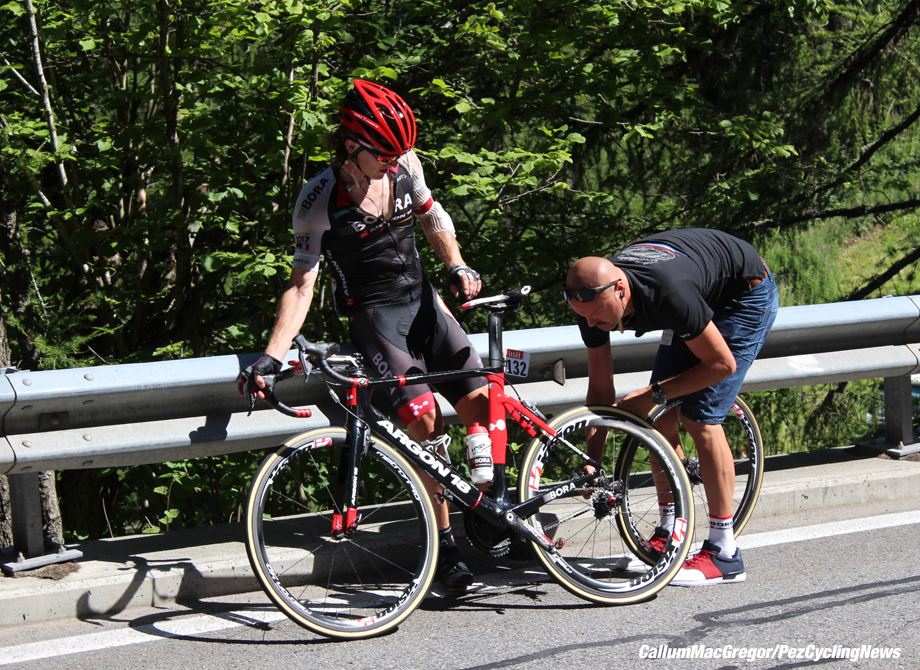 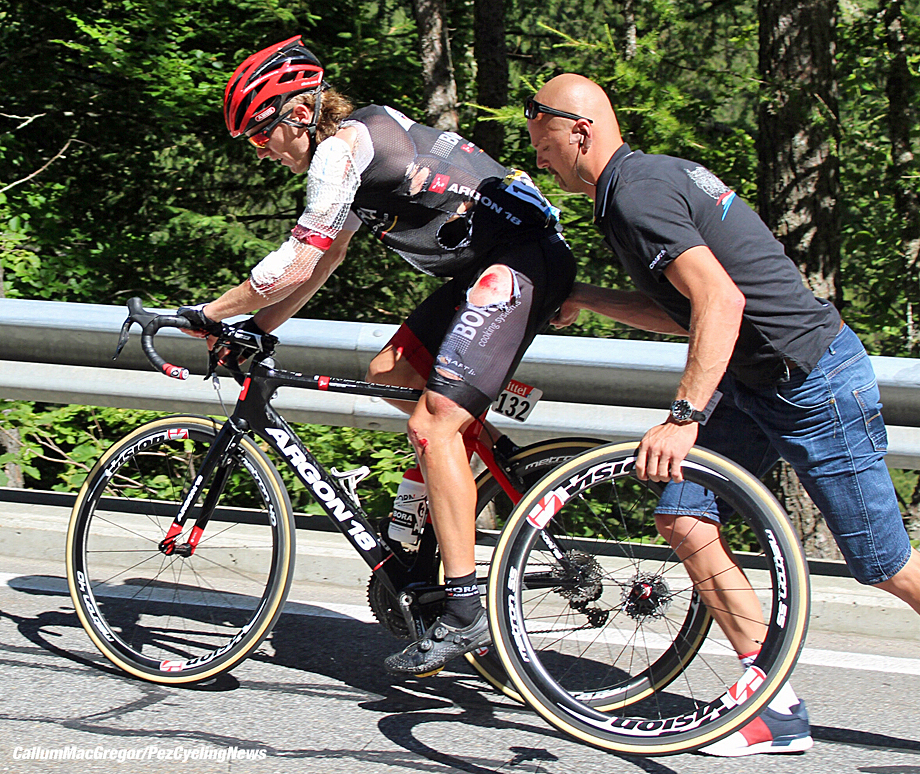 Can you imagine the pain of being pushed with a fractured pelvis?

Watching Shane Archbold Bora-Argon 18, get a wheel change in front of me climbing the Col de la Forclaz on stage 19 will remain with me for a long time.

Because having changed wheel the mechanic had to cant the bike at an angle to allow Archbold to get his leg over the Argon 18 machine, it was clear he had had an off, with shredded clothing and bandages applied on the road, evidence enough that he was suffering. No words were exchanged with the mechanic, job done he was pushed onwards and upwards.

There was a brutal truth to this moment, no screaming fans, just torn flesh and a man with a job to do which meant getting back on his bike and making the time cut. It would be Shane’s final stage of this year’s Tour. A fractured pelvis diagnosed following the stage. What I had witnessed on that mountain was a man who, with these injuries silently accepts his responsibility to finish the stage without a word of complaint; this will remain vivid in my memory.

Fellow riders passing checked out which of their number was in trouble as they continued up the mountain solemnly. These men of the Tour are special, exceptional even and not mere mortals and their individual stories are what make this event so beautiful.

Having the credentials means that time can be spent in areas the fans can’t, which for a fan like me can mean that the clock is forgotten, a dangerous thing. With the hottest of hot women, podium girls and sponsors models distracting from star spotting. 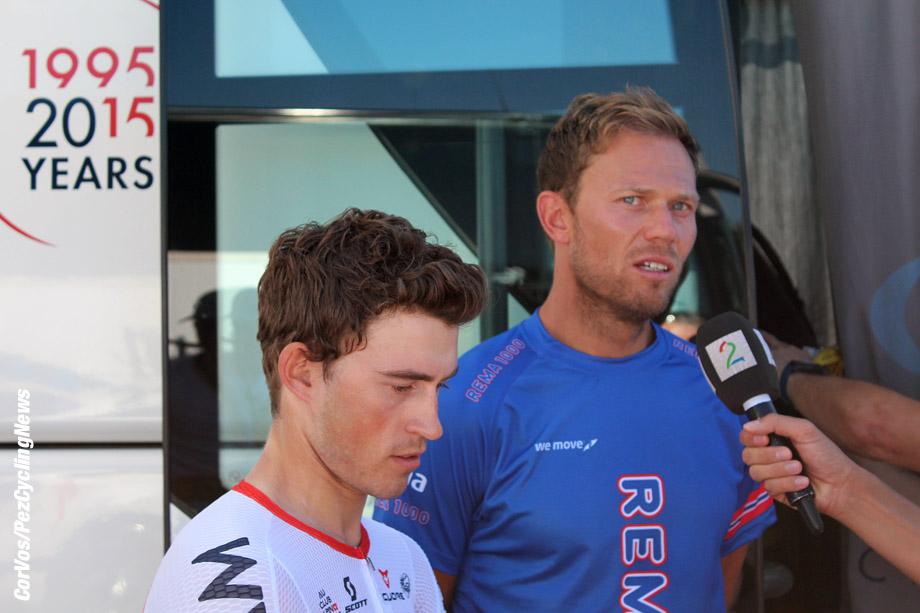 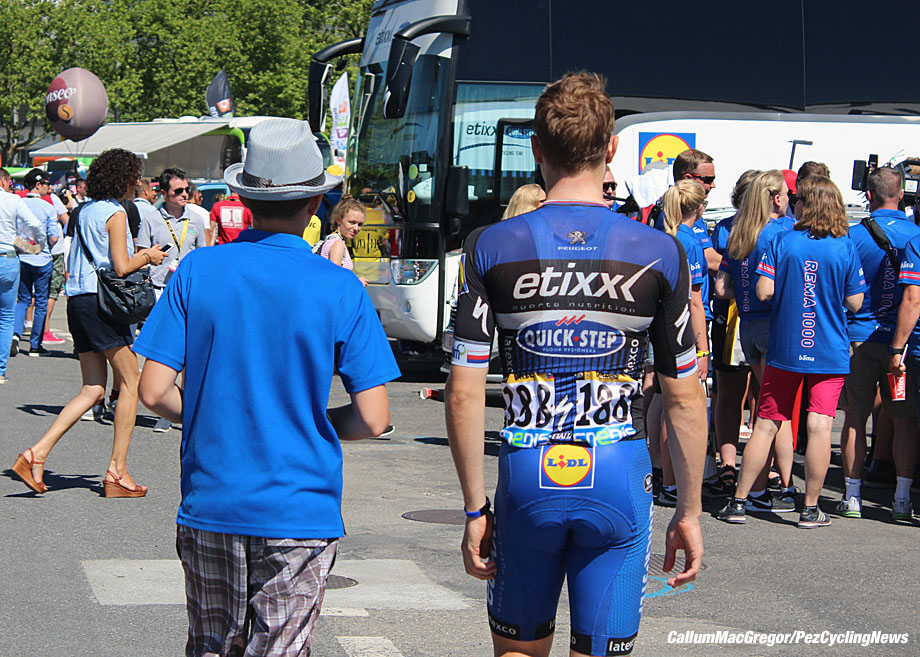 Vakoc: Hanging out with your cool older brother 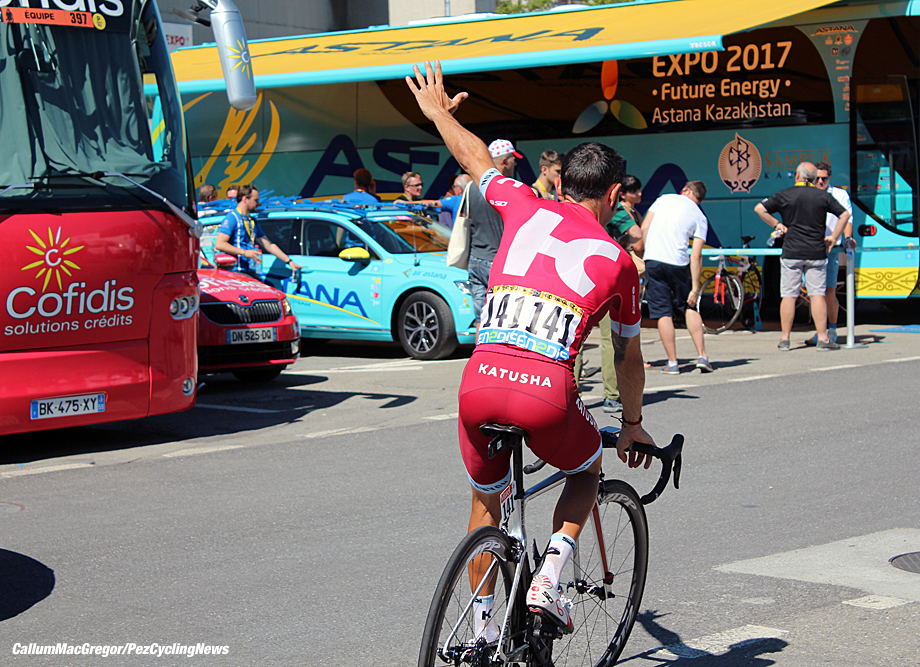 Joaquim acknowledges a friend on his final Tour

There are riders from yesteryear mingling with today’s rouleurs, who are all to a man immaculately presented. No ill fitting jerseys or oily chain ring marks on calves to be seen. The ensemble cast that makes up the entourage is generally too cool for school, everyone whatever their job is important, indeed critical to the race, the look for all is nonchalant casual, wearing shades with a style that is distinctly French and I’m left feeling slightly out of place, a style makeover required me thinks. 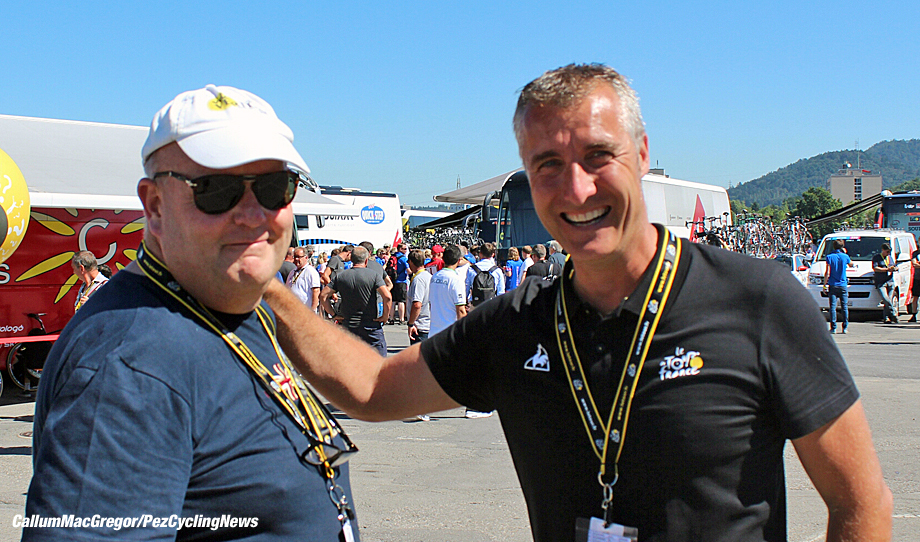 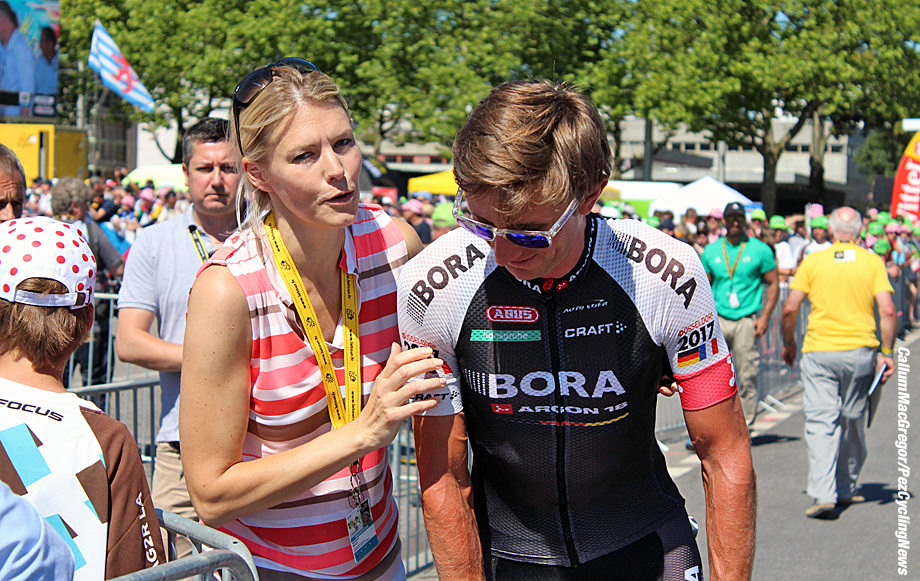 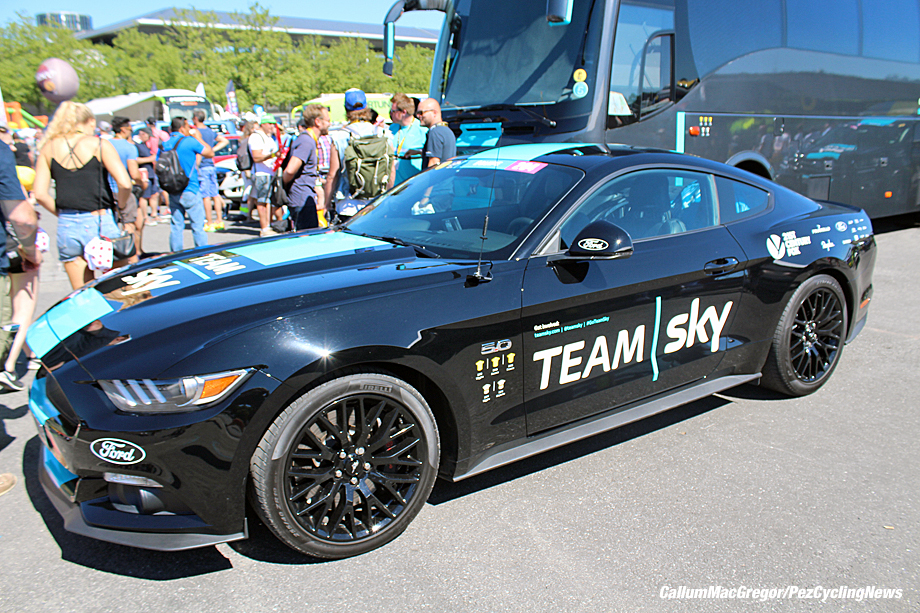 Jean Michel is one of I’m sure many exceptions to my rule, Ed is greeted as an old friend and I am warmly welcomed. Jean Michel Monin is the man you need to see about getting a sticker for the car to follow the contra la montre (time trial) the following day, no problem says he and true to his word produces the essential sticker from pocket unprompted when we track him down the next morning.

Our stress levels reduced, the clock slows again and we can chill knowing that the day’s essential item acquired we will follow a rider on their own personal journey up the mountain in a world of pain. Something for us to look forward to! 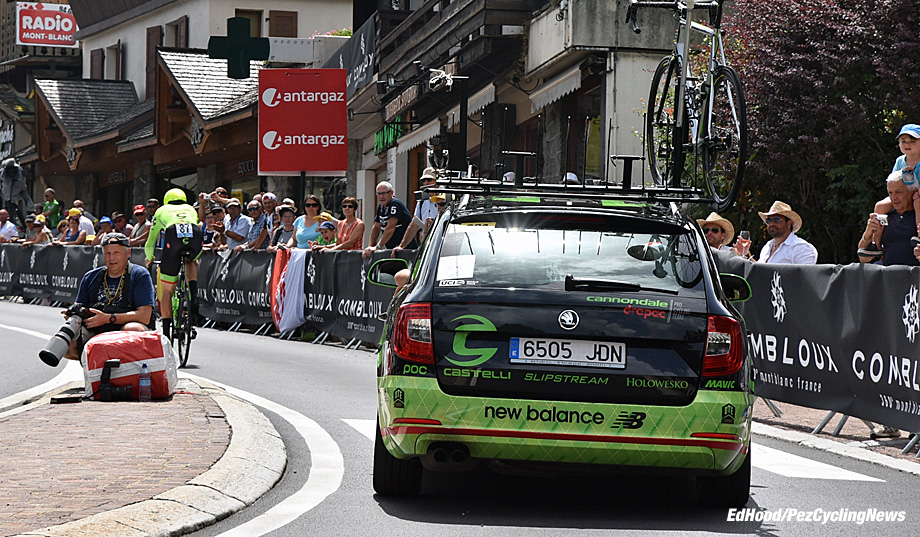 And a word about the fans, not the clowns or the fools dressed to grab attention and hopefully their fifteen seconds of fame on television, of whom I wonder would Warhol approve? No, the real fans for me are the families and extended families camped and set up for the day with BBQ’s awnings, tables chairs, parasols, vin and bierre and the riders who pedal the cols to cheer their heroes and encourage the grupetto. 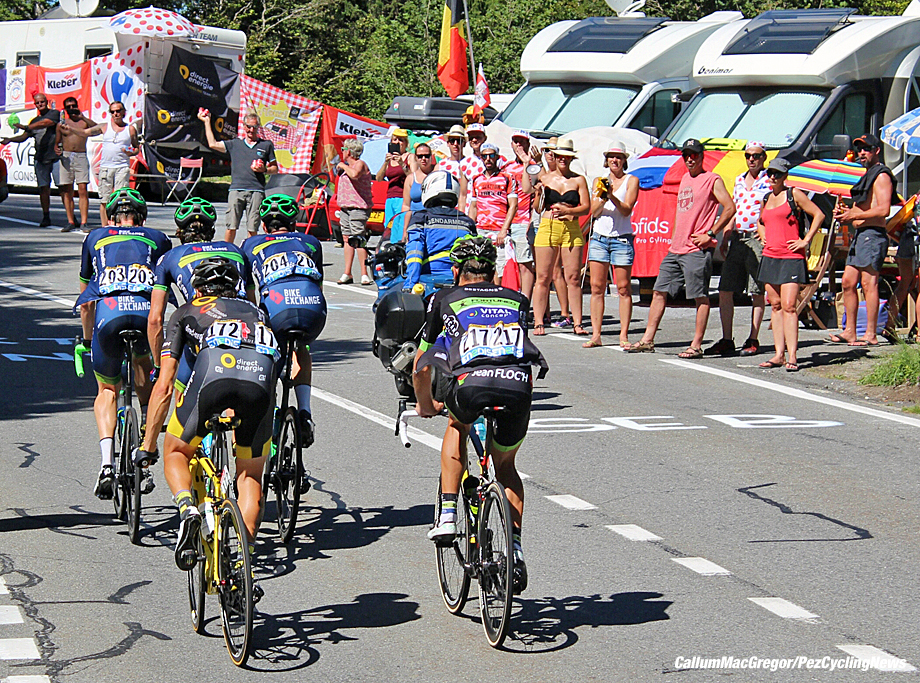 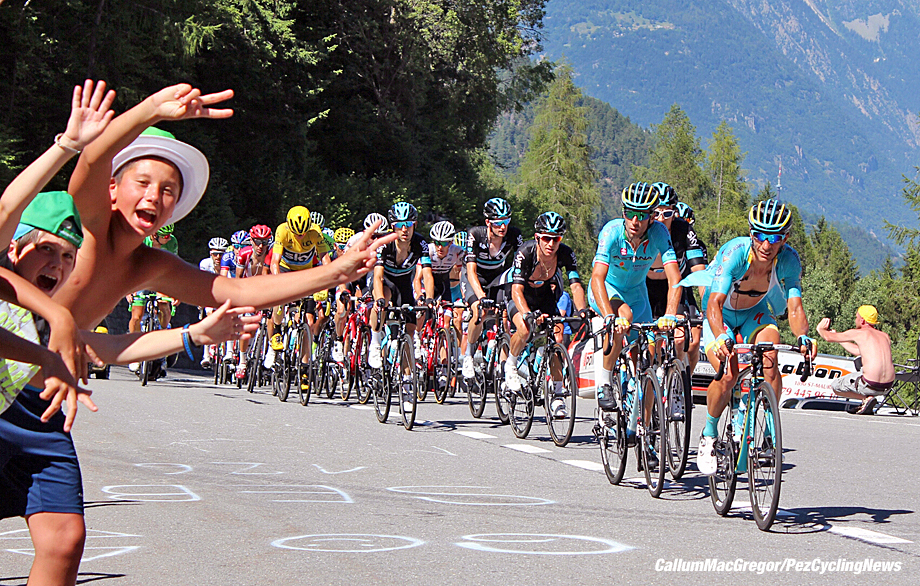 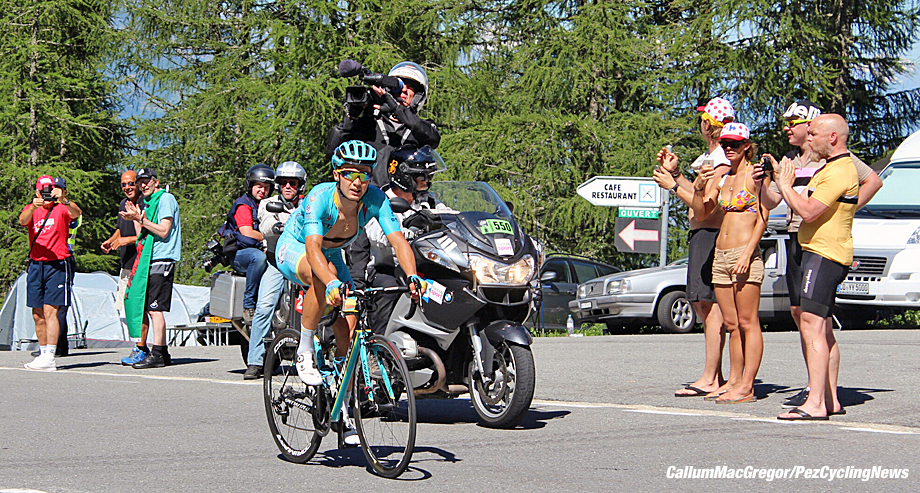 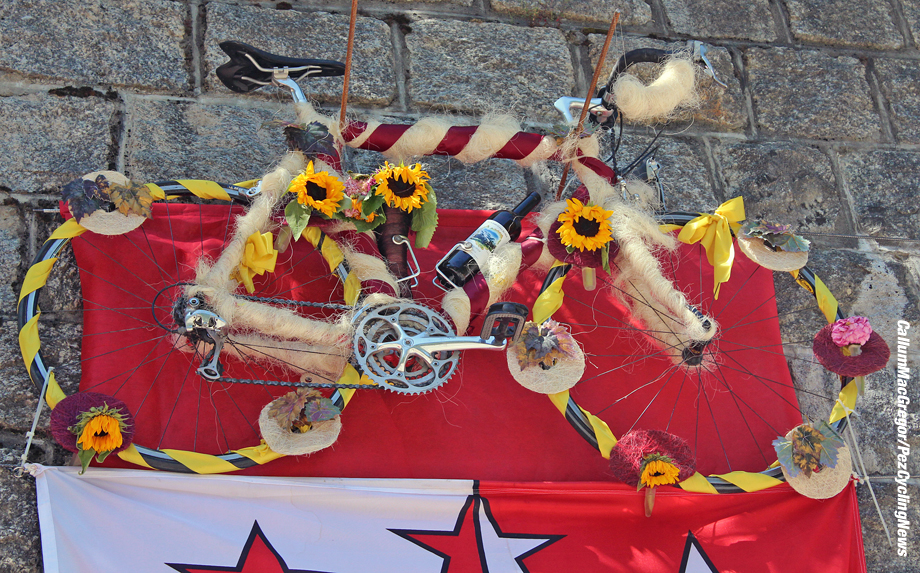 Decorated bike with local flag, the creators appreciated their work being noticed

The joy of the Tour irrespective of the winner and their style on the bike or style winning is the happiness it brings to all who watch, whether roadside or on television across the globe. In a time when France has been the target of such atrocities as Nice and the Bataclan theatre in Paris, the Tour is a vehicle for happiness that transcends national borders and to see this from the wheel of an underpowered Yaris has been a privilege and life affirming.

Monsieur Froome said it best from the top step of the podium in Paris, Vive la France and Vive Le Tour.