On the 'Ball of the World'

Roadside Vuelta’12: Stage 17, the penultimate stage of the 2020 Vuelta a España, finishes on the summit of the Alto de La Covatilla after 178 kilometres of hard racing. Back in 2012 the second last stage of the Vuelta finished on another mythical climb – The Bola del Mondo. Ed Hood and Martin Williamson were there for PEZ, this is the story of their day, with updated big photos. 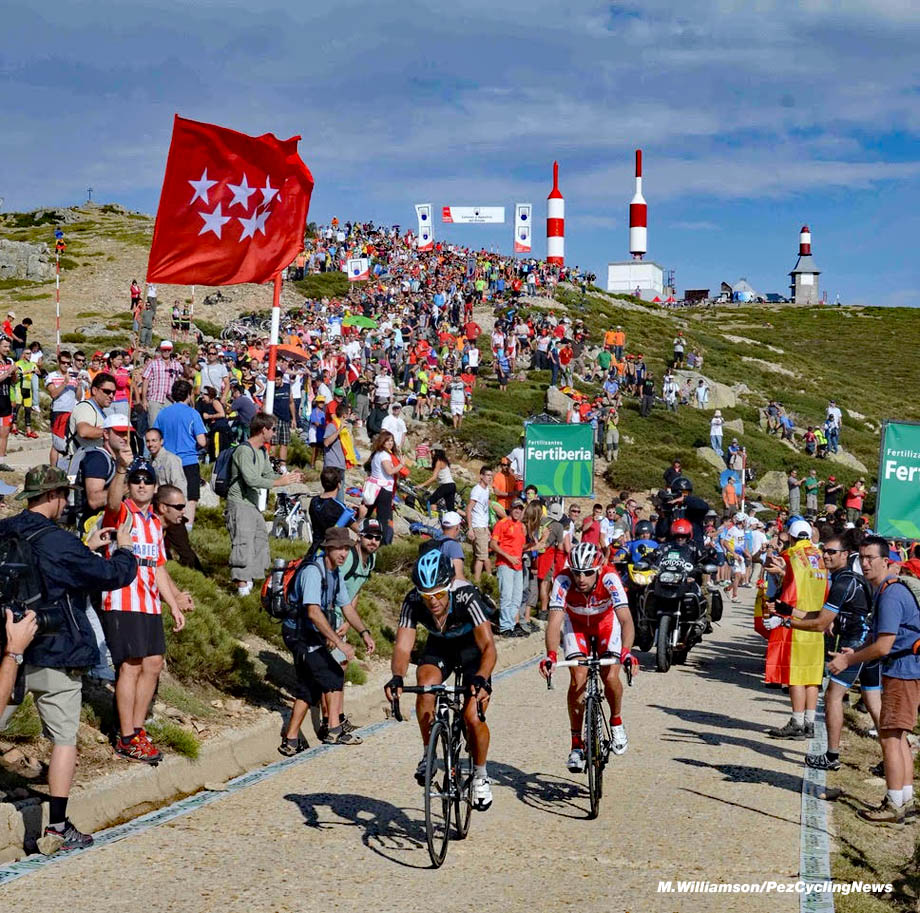 Porte is trying to get Menchov to come through, on the last hairpin; but the wily Russian is way too smart for that. We watch Porte lead on to the final ‘ski slope’ to the line, high above us – then the crowd closes in behind them. Although we’re less than 500 metres from the line, we have to rely on an email from Al Hamilton to tell us that Menchov has prevailed. Too experienced and too strong for the young Australian. 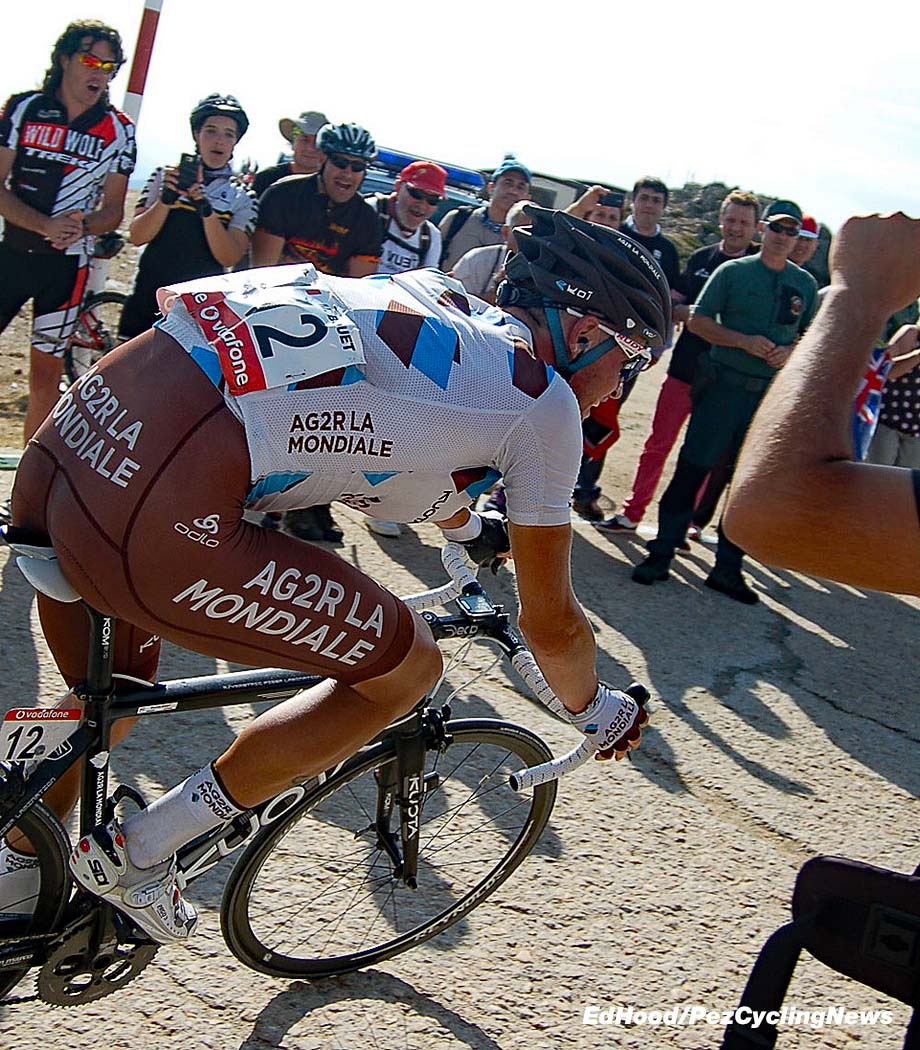 Then it gets serious as Rodriguez rips past, maybe he can’t slip Contador by enough to wrest back the jersey – but maybe he can leapfrog Valverde? It’s not to be; Valverde keeps the gap to ‘Purito’ at 25 seconds, whilst Contador concedes 44 seconds. 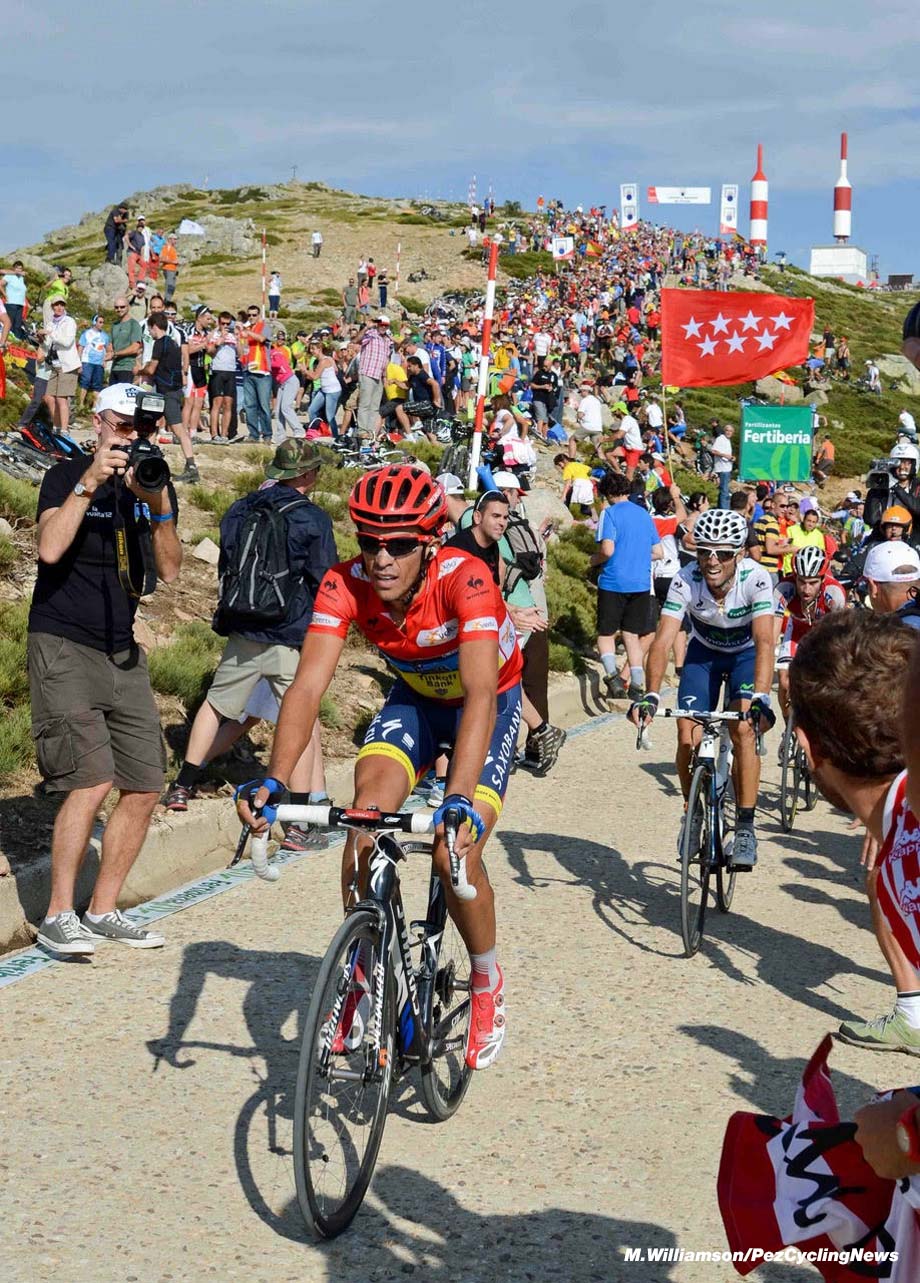 Barring disaster, Alberto Contador has won the 67th Vuelta a Espana. But let’s go back to this morning and the traffic jam. . .

The PR girl at the road block hands me the magic sticker, I peel it and apply it to the Panda windscreen, the stern faced cop waves us through, the folks in the cars behind glower at us – and we’re on the initial slopes up to the Bola. Just us and clubmen on their BH’s and Orbeas, the walkers with their cool boxes and ski poles – and very few vehicles.

Car creds – we love them. 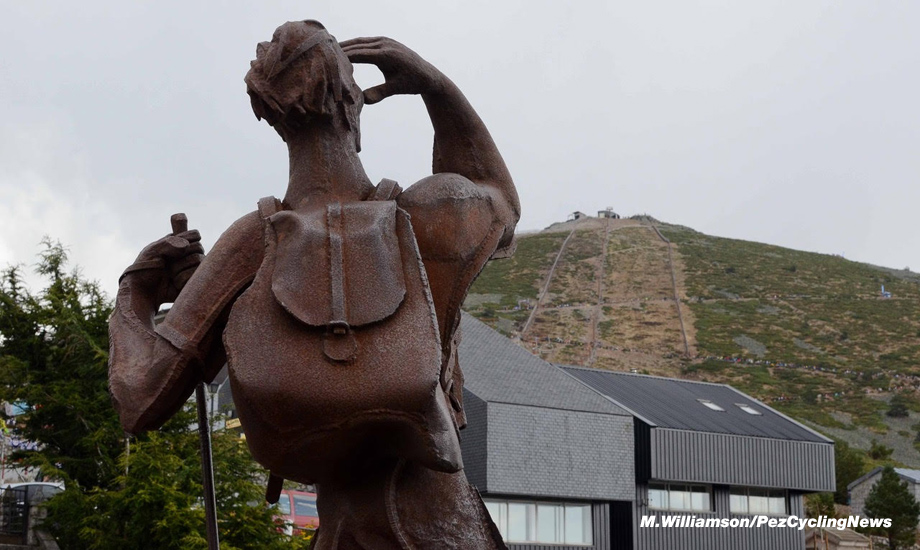 ‘Bola del Mundo’ – ‘Ball of the World,’ the man in the creds centre explains it’s named thus due to the top being curved like a ball and it being the highest point in the Madrid Region.

But Mr. Hamilton, our Spanish correspondent says; “It seems the ‘Bola del Mundo’ comes from TVE, the national Spanish TV station. As you know there are lots of TV aerials on the summit and the logo of TVE is a ball (the globe) with transmissions coming from it. So it’s named for the TV.” You’ll have to make your own mind up on that one, folks.

The grind up to foot of it isn’t a killer: not for WorldTour riders, at least. It’s wide, well surfaced and not savagely steep – a main road, after all. But the Bola itself is a ‘road to nowhere’ off the Alto de Navacerrada pass which drags up from Navacerrada then drops back to the broad plains where Madrid sits as the highest capital city in Europe. We thought we’d seen them all – the Ventoux, the Tourmalet, the Kron Platz, the Angliru, Covadonga. . . 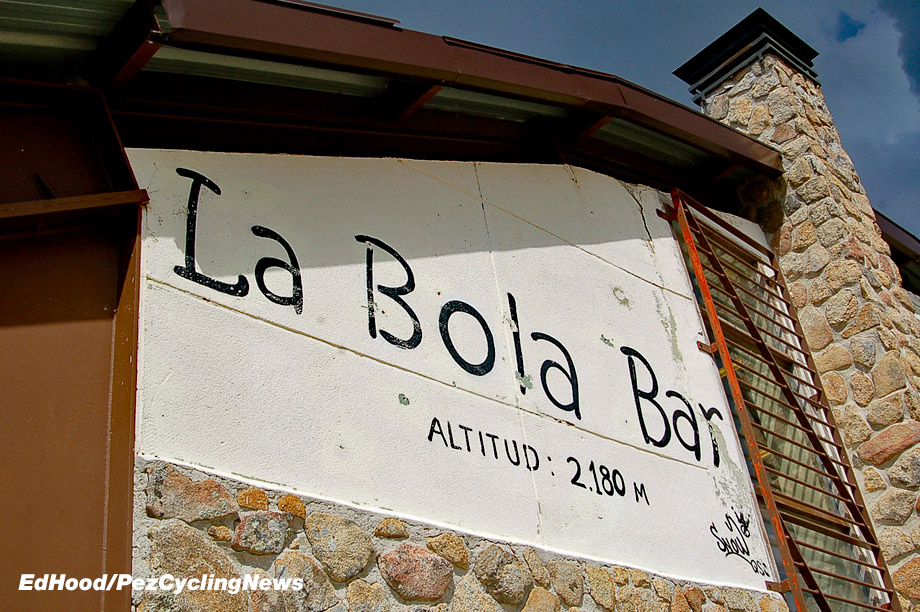 But this is nuts – we stepped off the ski lift and into La Bola Bar at 2,180 metres thinking we’d be at the top. 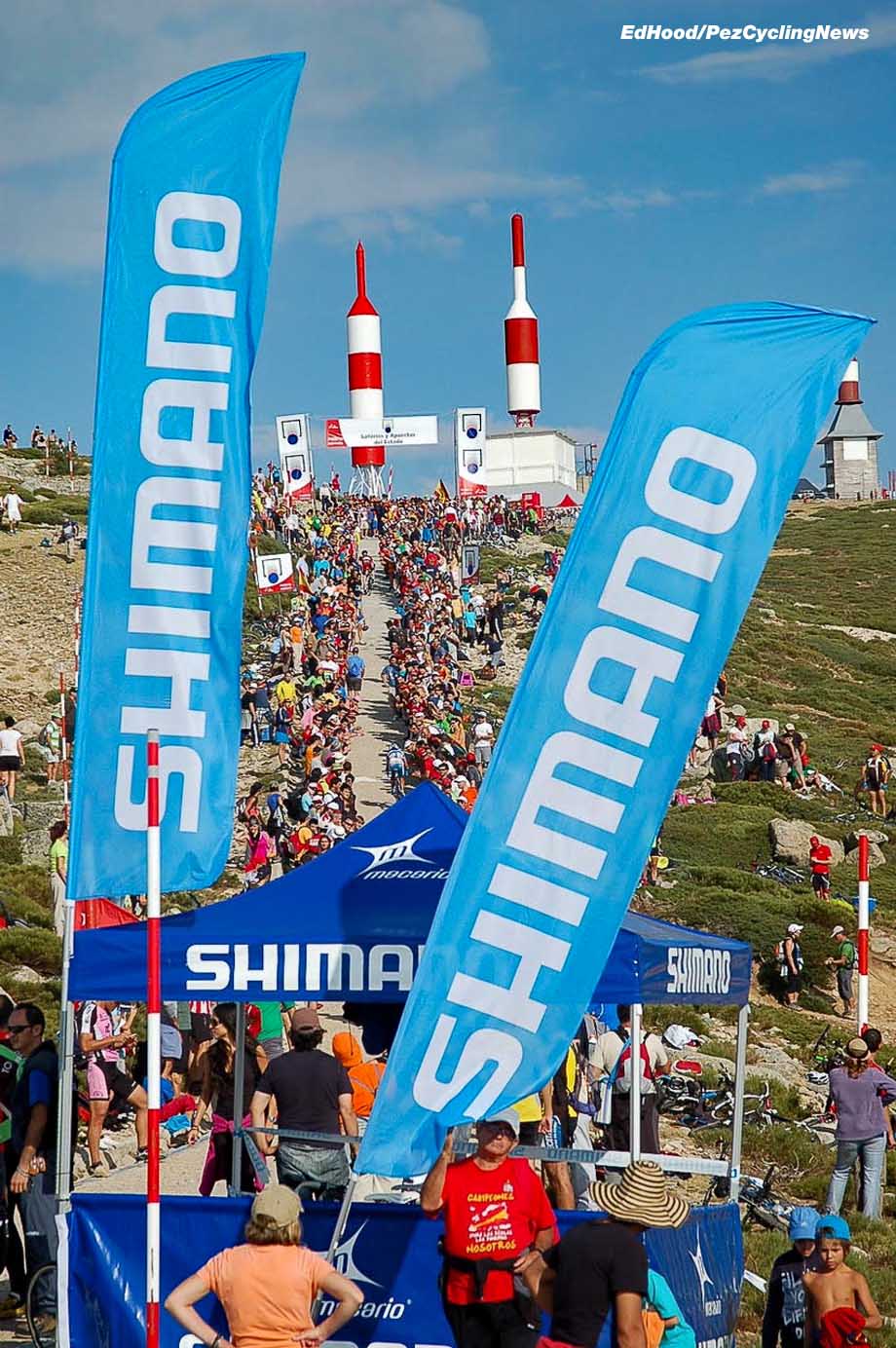 But not a bit of it – the hill rears again to where Tintin-esque structures dominate the skyline. Not only is there the altitude and the gradient to consider, there’s the actual pavement. The road surface is concrete, it’s been shuttered and poured straight onto the rock – but the ‘fat’ or smooth top surface achieved when the wet concrete is ‘tamped’ down has long gone, ‘blown’ by winter frost. The surface now consists of gravel chips, jutting out of the cement which binds it. 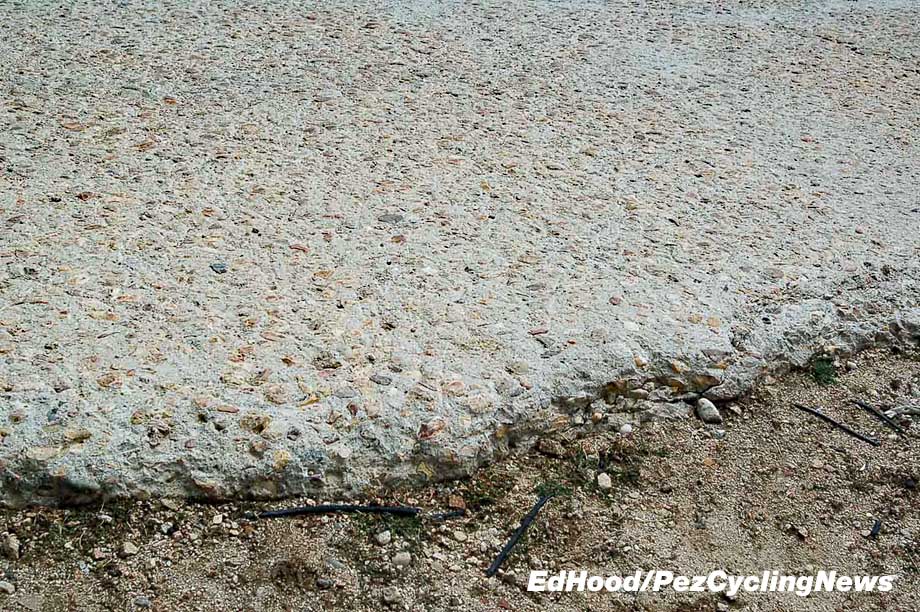 Christian Vandevelde reckoned they simply dribbled concrete out the back of a truck as they drove it up the mountain – maybe he’s right? 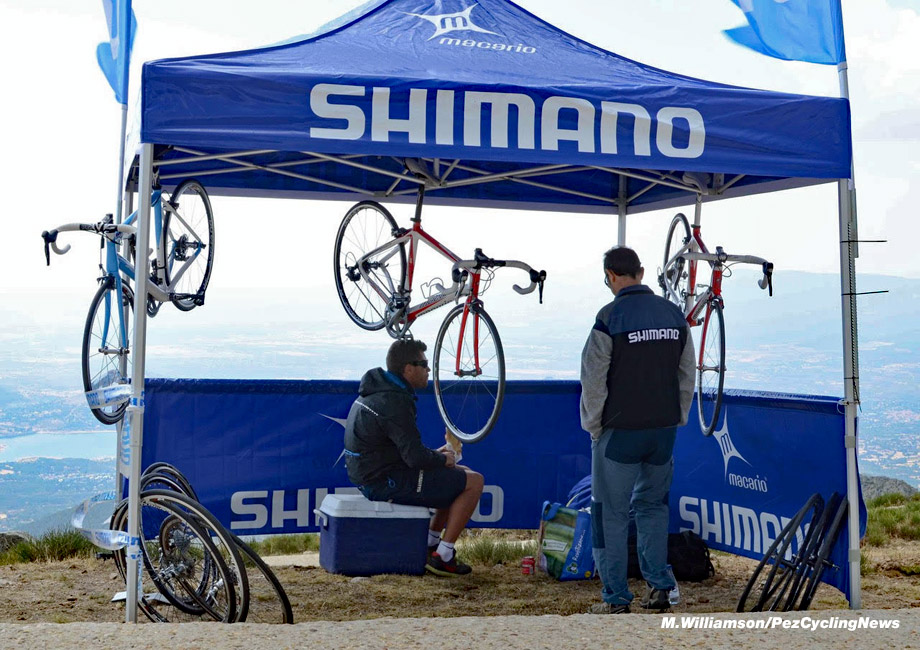 The team cars aren’t allowed up; there’s nowhere for them to go – so there are Shimano service tents with spare bikes and wheels, at intervals up the climb. The Mahou beer in the Bola Bar was from a tin; but it hit the spot – as we prepared to make the final push for the summit. 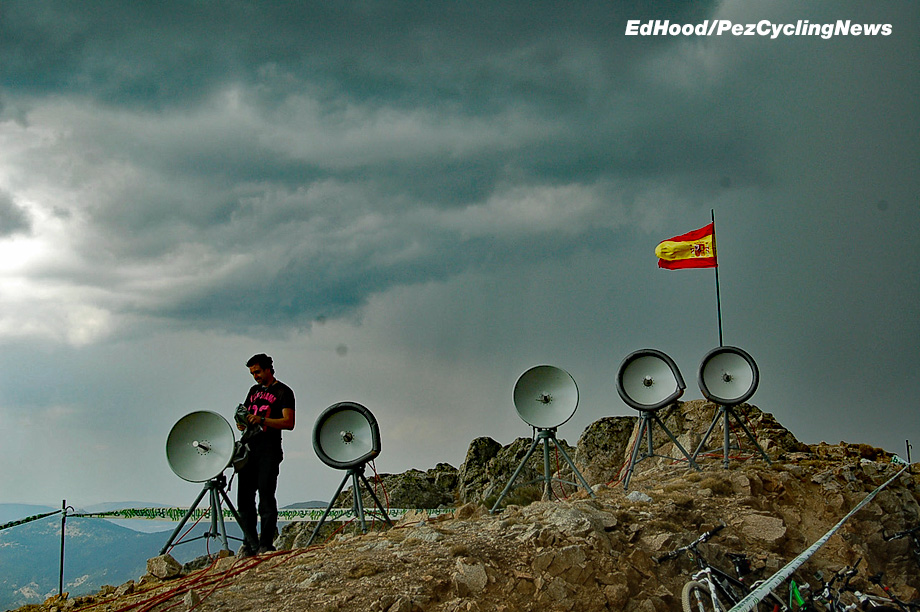 Then the thunder rumbled, the lightning flashed, the sky opened and T-shirts and shorts just weren’t the thing. We retreated to the ski lift but ‘no dice’ – it’s suspended ’til the storm passes. The race passes the Alto – where the ski lift starts – twice, once when it goes to make the loop round by Cercedilla and then on the second passage when it hangs right into the concrete ramps of the Bola.

It’s undeniably a spectacle, routing up to places like this – but it narrows the spectrum of potential winners dramatically. ‘Big boned’ riders can simply forget it as the narrow concrete ramps – looking for all the world like a farm track – ‘zig’ across the face of the Bola then ‘zag’ the other way. 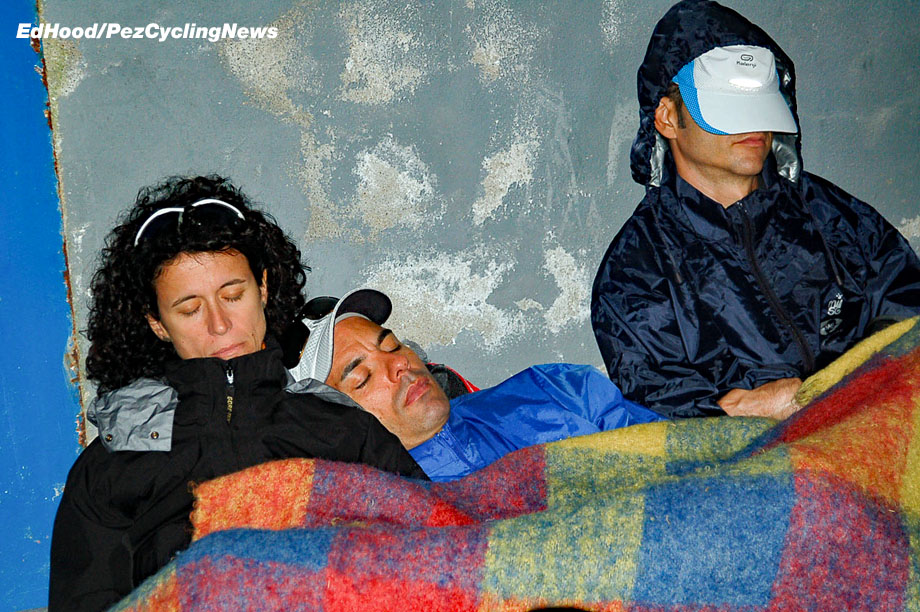 It’s a bit like the London blitz, up in the ski lift station, folks settle down for the long haul to sleep out the storm; as we think about dull things like Nikons getting soaked and deadlines.

The squalls ease, we hop the lift – a dry T-shirt, jacket, into the bar to dry out and have a bocadillo and a café con leche. The bar smells of brandy, frying, beer, coffee – and sweaty cyclists. The TV shows the break is on the Morcuera climb, Simon Clarke jumps them to steal the points – it looks like he’s sealed the KoM.

Euskaltel lead the chase, through the rain, they blink in the cold spray as capes flap in the wind. It’s a big break, with two Katushas – they’re not there for the stage, Rodriguez is going to try to get up to them, at some stage. And Cobo is there for Valverde. Still Euskaltel grind it out – but will Anton be able to finish it?

They’ve clawed back four minutes on the break, but the gap has stuck at seven minutes. 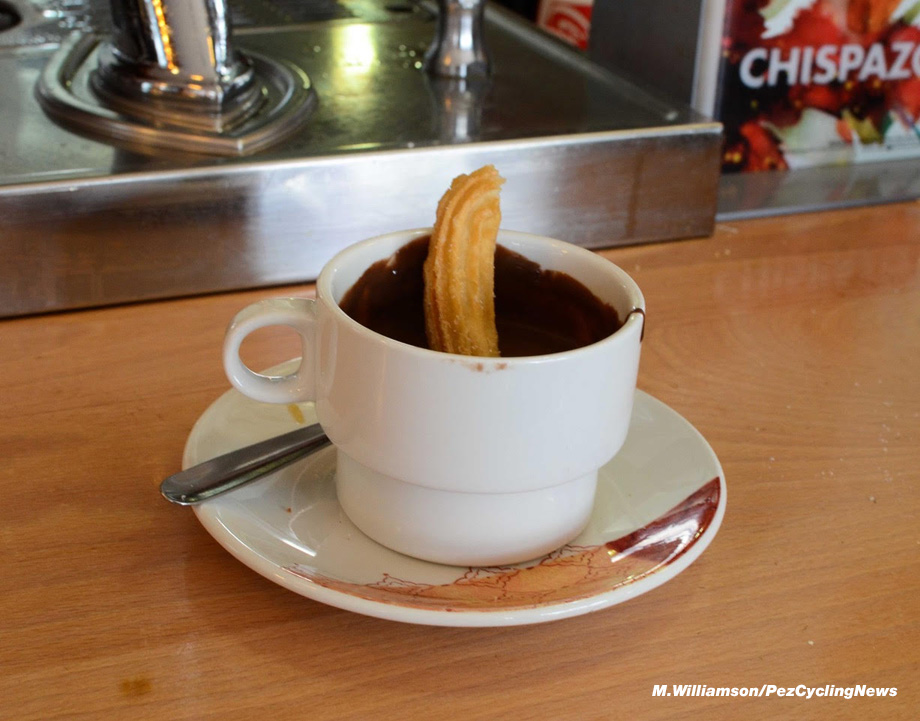 Meanwhile, ‘Hay chocolate con churros’ for the PEZ boys. On the screen, the Basques try to lift the tempo, cheeks puff out as the kilometres click down towards 50. 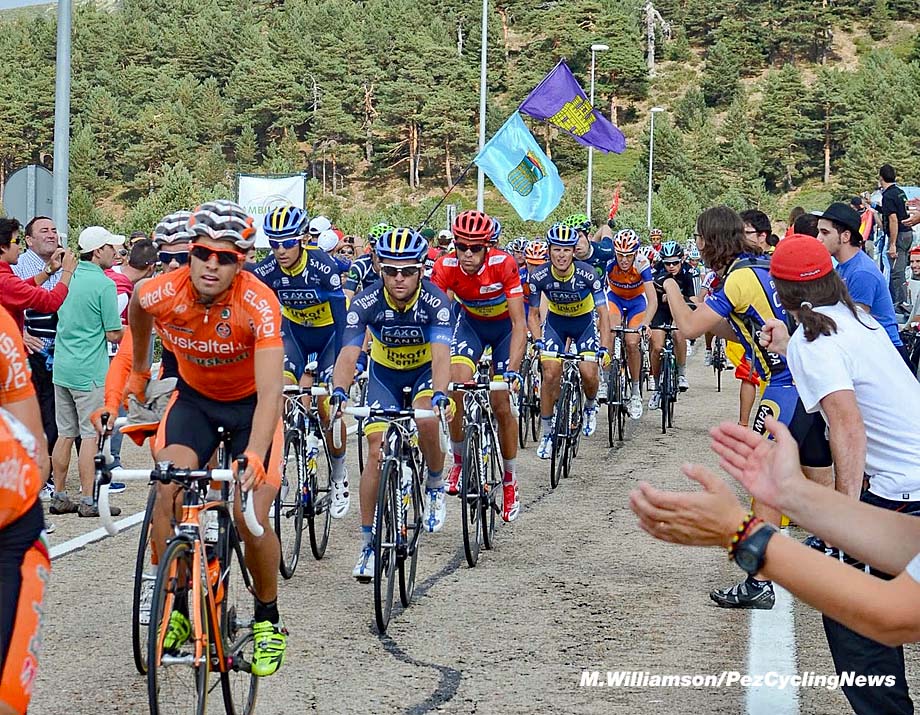 Contador and Saxo-Tinkoff watch and wait behind the men in orange; they know that their day’s work hasn’t started yet. Time to leave the TV, they’ll be making their first pass, soon. The first policeman we meet would have worked well in the Franco days – he buries his finger in my chest to stop me crossing the road. Meanwhile ‘civilians’ gamble happily on the same tarmac; “he’s got a gun,” Martin reminds me. Indeed. 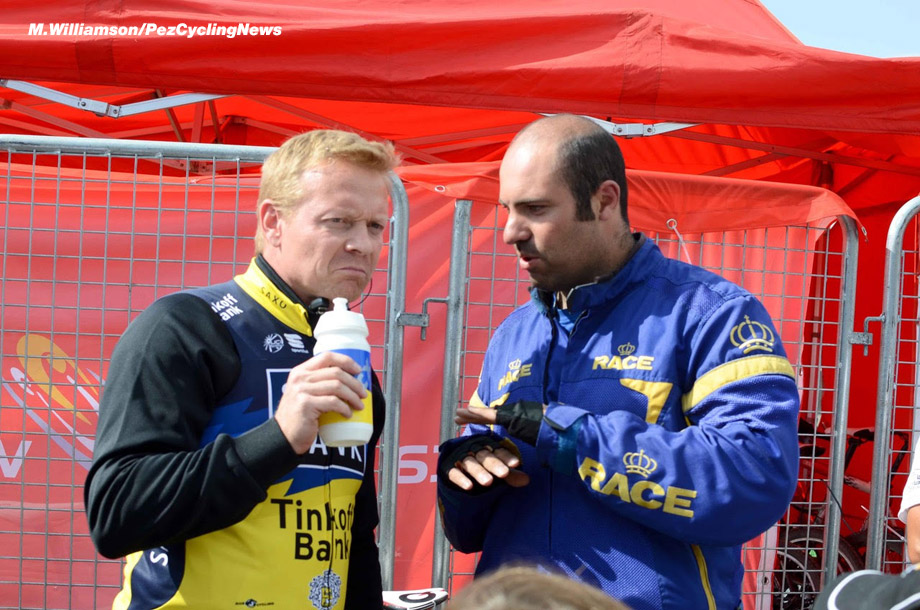 Another man having problems with authority is Contador’s mechanic – he wants to follow Bert on the Bola on the motor bike with a spare bike on his shoulder – ‘No!’

There’s no lead bikes or car – it’s España after all – bang! The break hurtles past and they still look purposeful. A few survivors from the break pedal past, maybe they harbour dreams of rejoining on the descent? 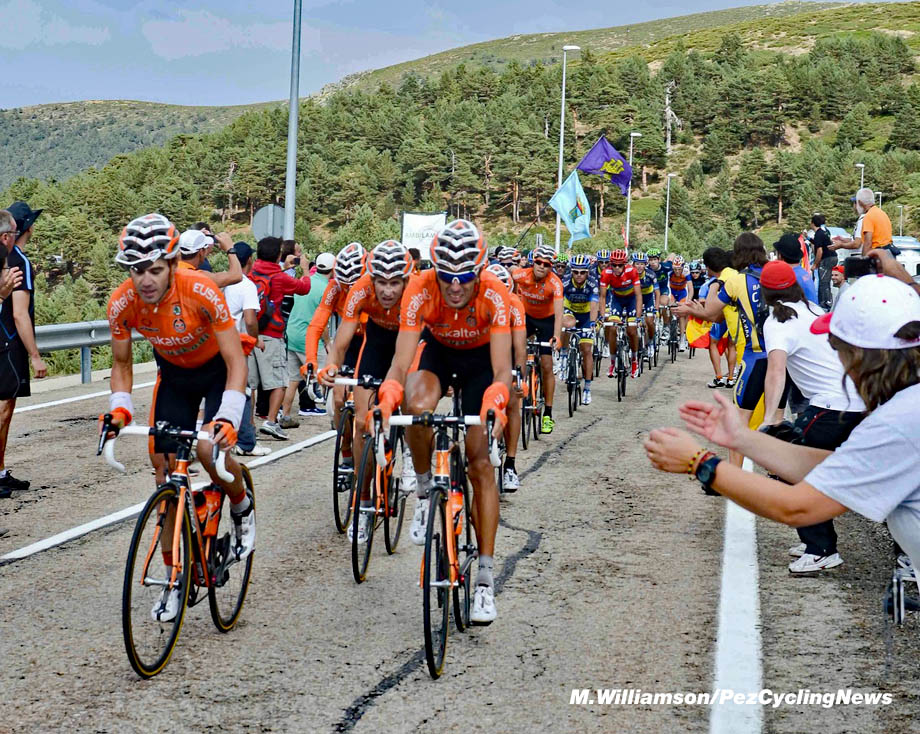 The peloton is at six minutes – and it’s still the men in orange grinding it out. Degenkolb and his Argos minders aren’t too far down and it’s around five minutes back to laughing group. The ciclistas have a 40K loop to describe before they tackle the Bola. We have a tougher call, to beat the Saxo-Tinkoff VIP’s to the ski lift – meanwhile, a bull has a bad turn at all these people spoiling his Saturday afternoon and sends fans running.

A heavy Spanish guy does a fair Usain Bolt impersonation but on rock and scrub, leaving his young daughter to the toro – but the big chap with the horns has made his point and jogs off up the hill with no damage to anyone. We snap away from our gondola as the sun warms our skin, again. We pick our spot and wait . . . . 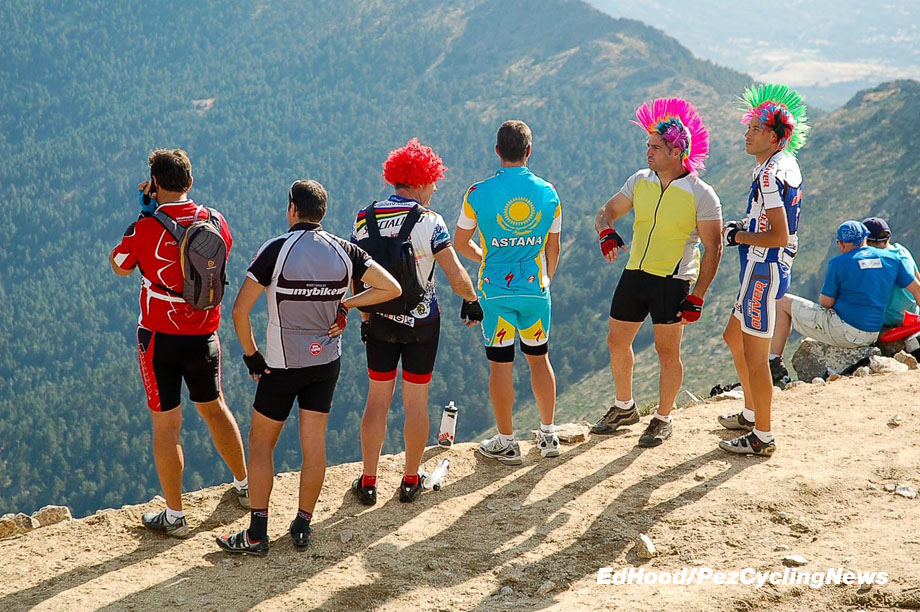 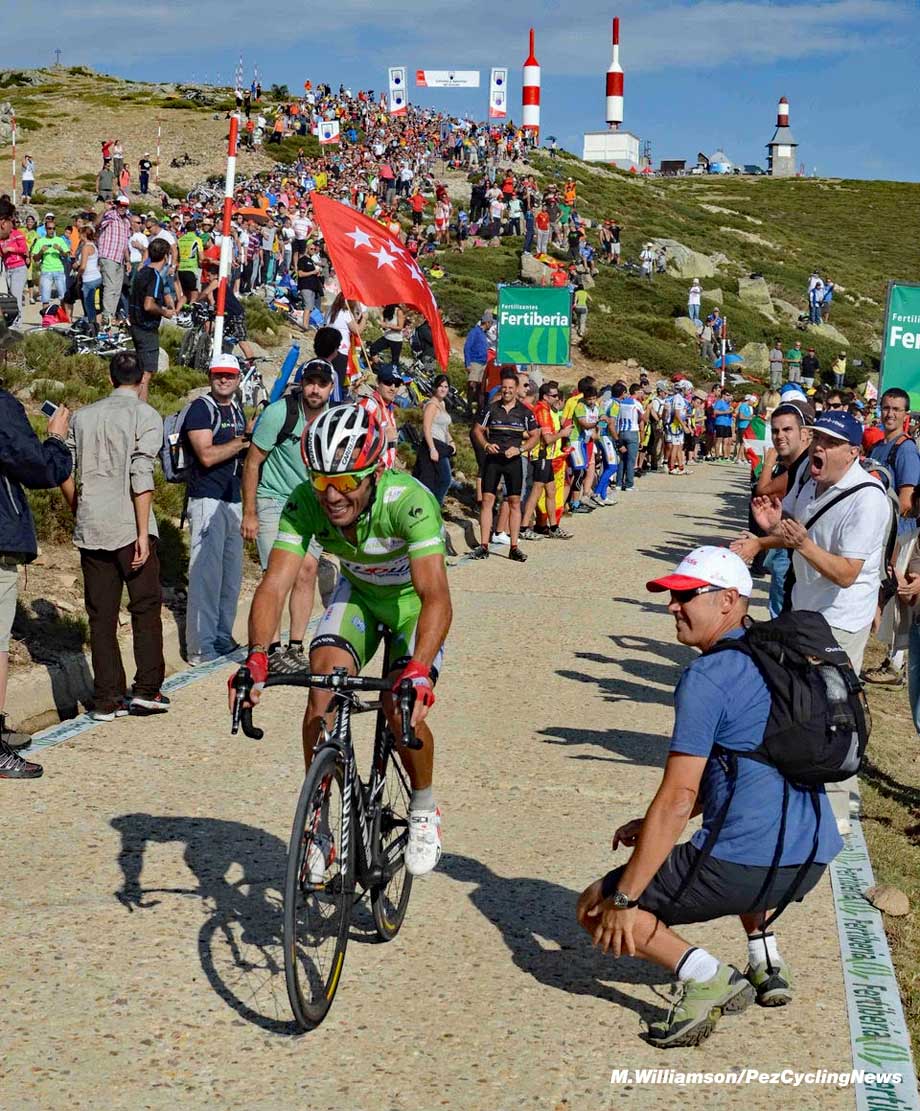 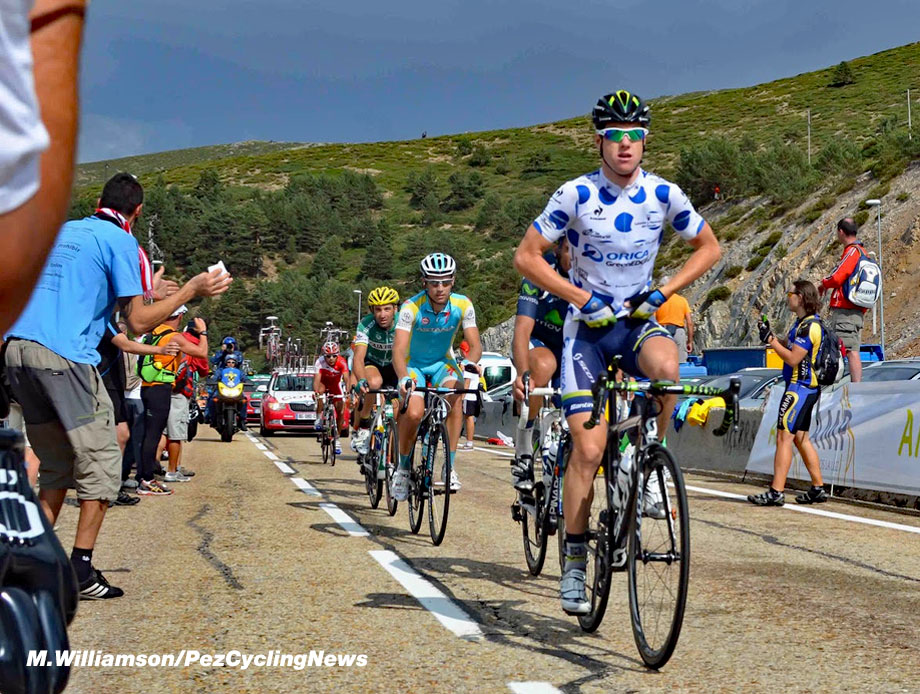 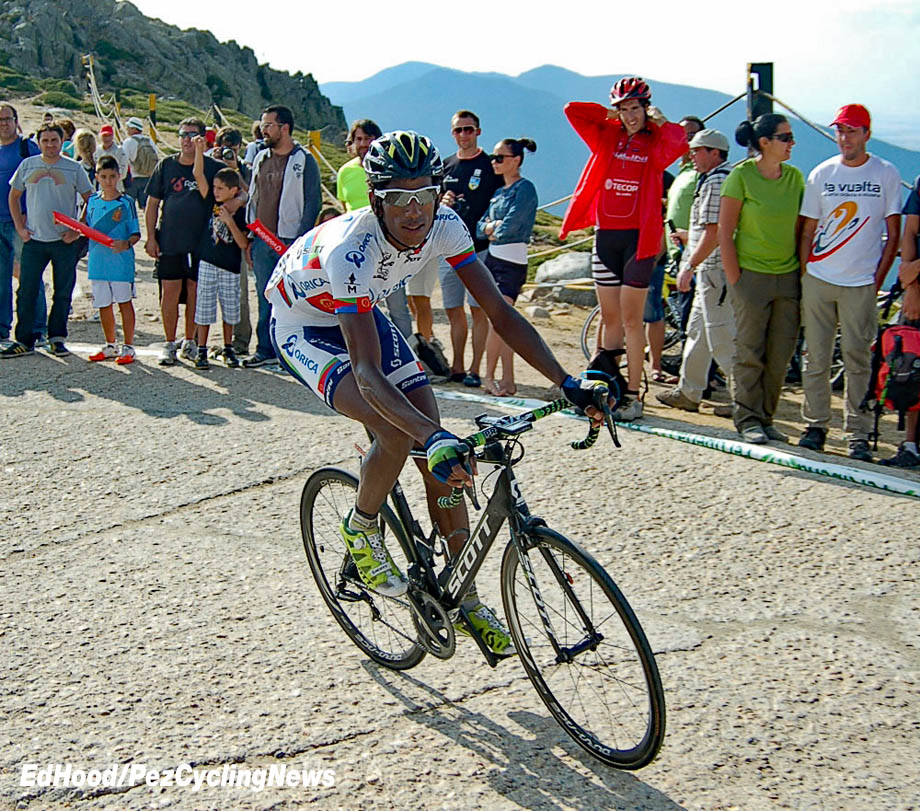 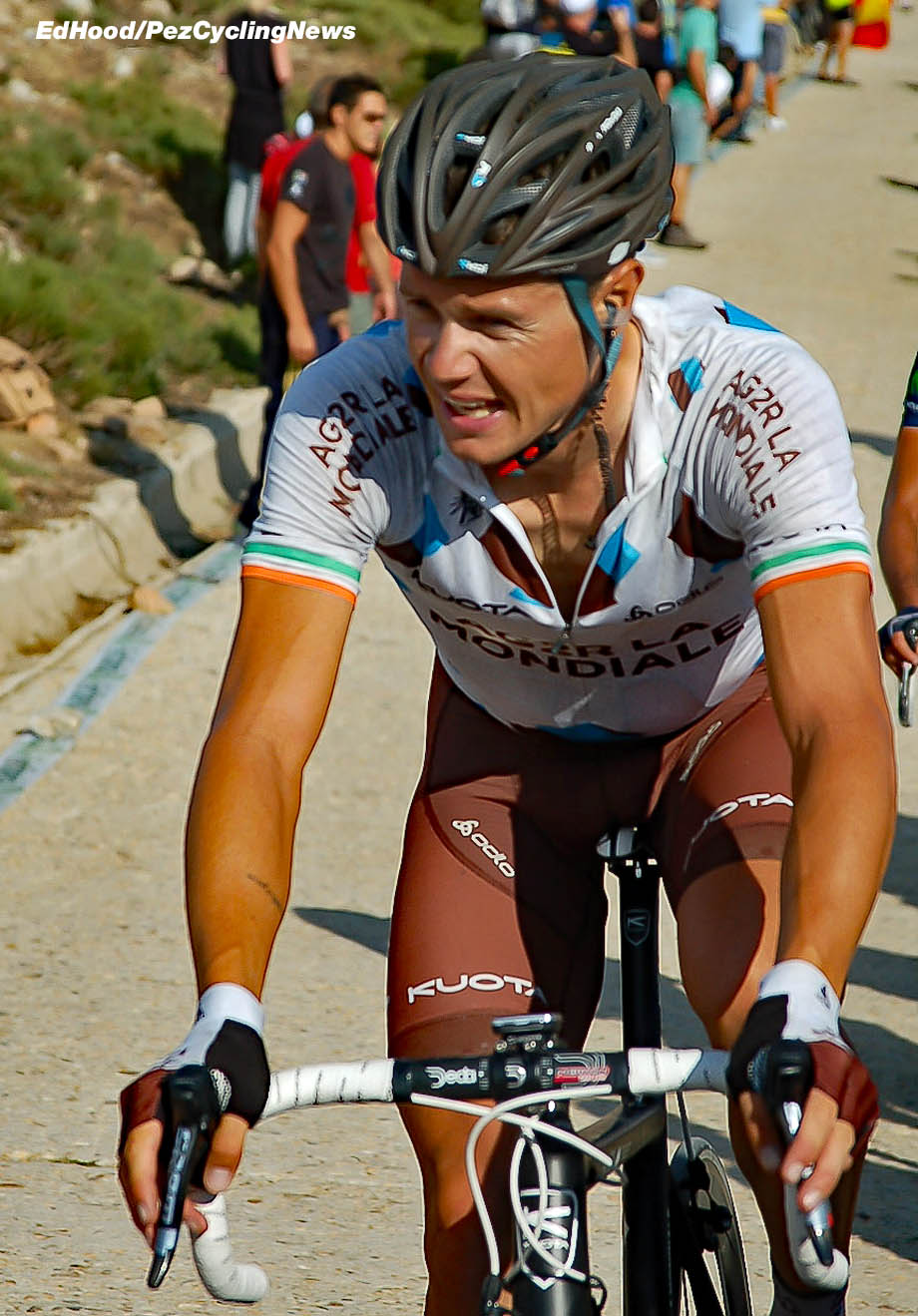 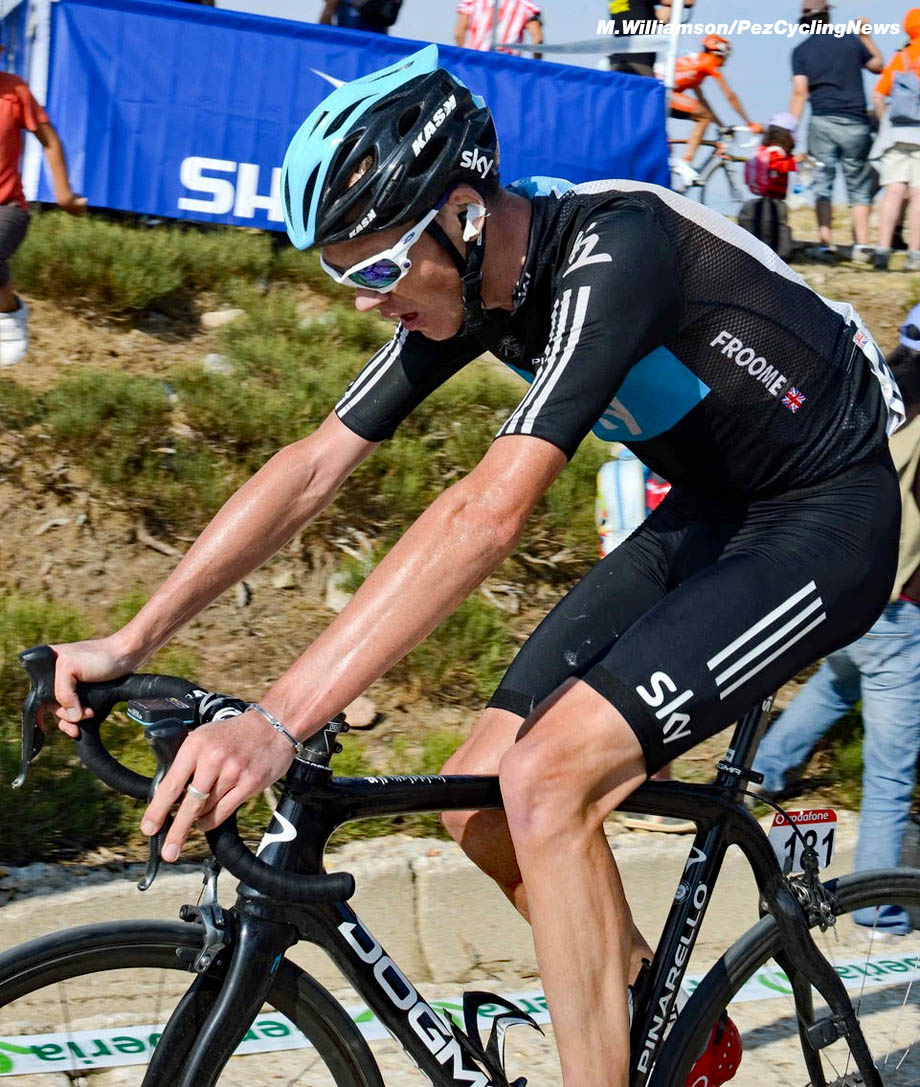 But there’s the postscript – men who have given their all for the cause – like Contador’s Saxo-Tinkoff soldiers; men who’s dreams have come true – like King of the Mountains, Simon Clarke and Daniel Teklehaimanot, doing such a big job for African cycling; men who’s dreams are shattered – like Nico Roche’s ‘top ten’ dream and Chris Froome’s ‘podium’ dream. 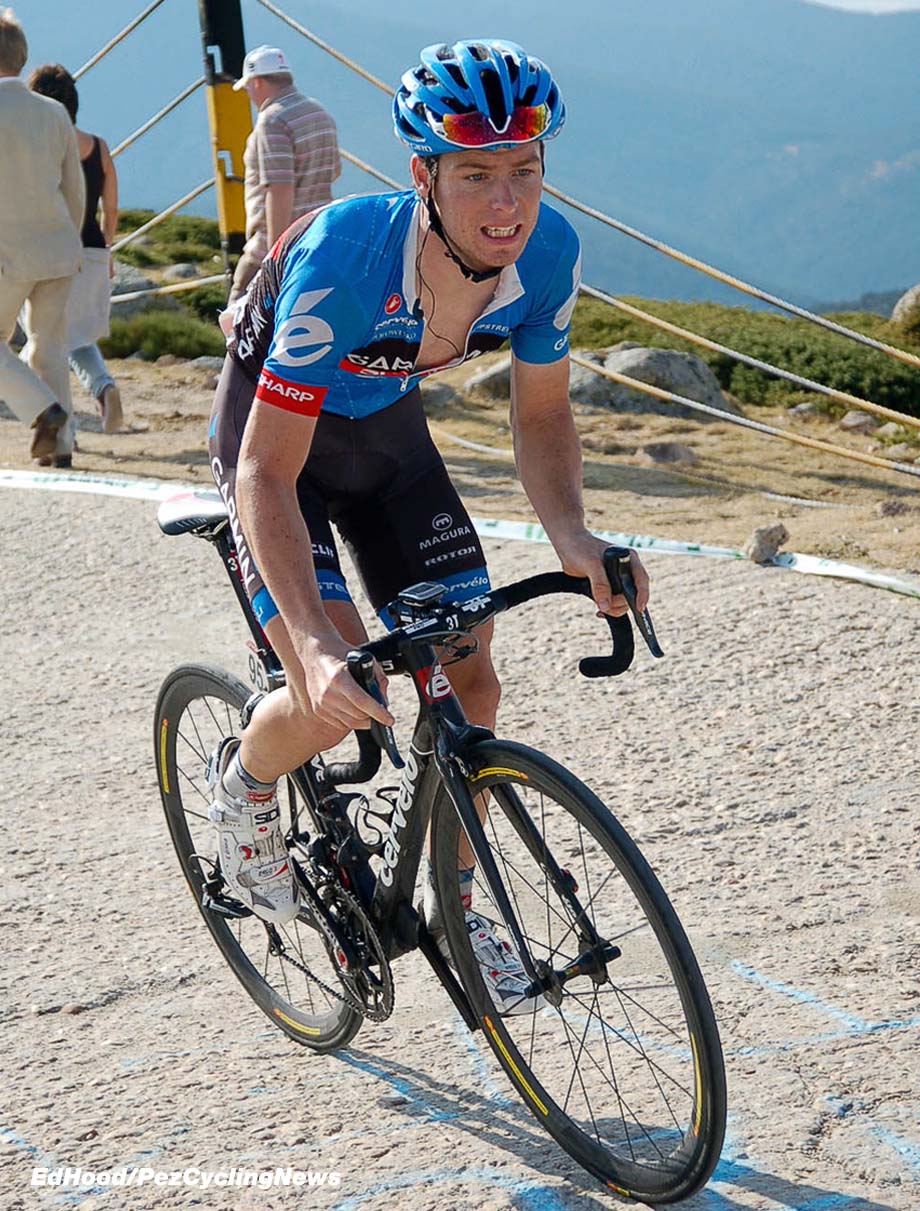 Last man on the road was Garmin’s Raymond Kreber, 34:37 was the gap back from Menchov. Days at the office don’t come much harder. 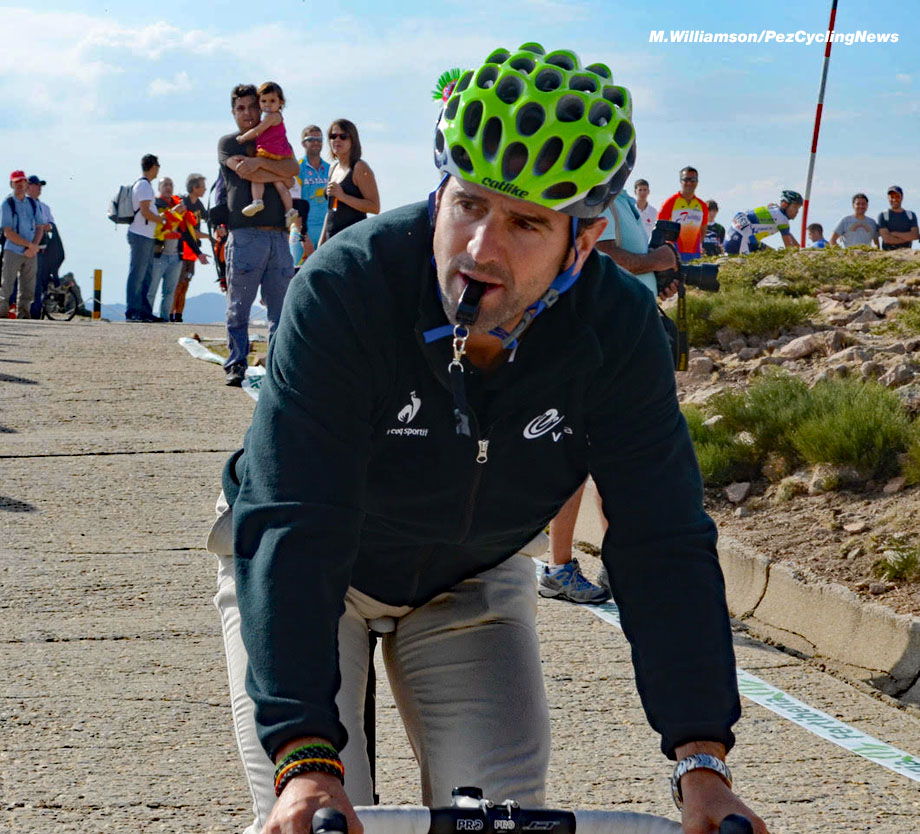 Race organiser and former race winner, Abraham Olano whistles down the climb; and for us there’s just the ski lift queue to jump and then the press room to get our copy and pictures away. Bert ambles in to the press room to no applause and answers the same old questions – every single one in Spanish. There’s a little applause when he leaves, but not much – it takes a lot to impress the hacks. 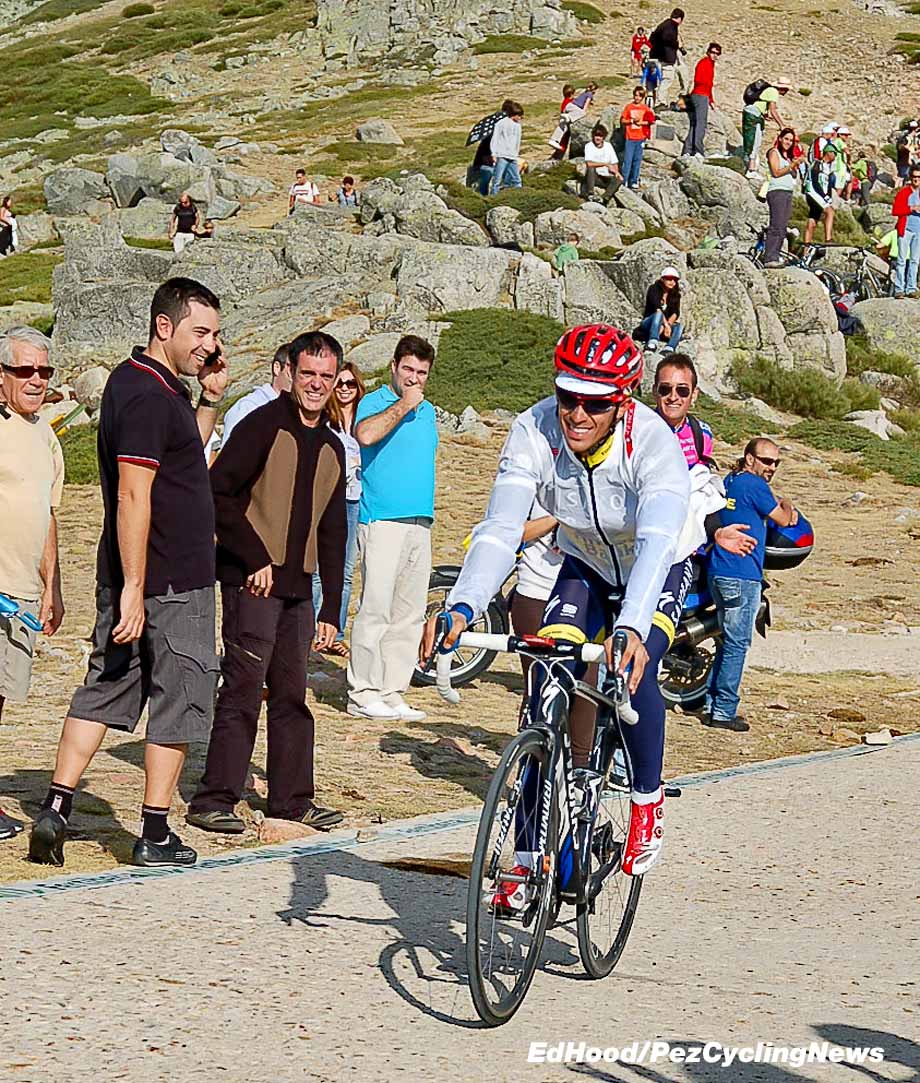 But rest assured Alberto, we think you did a ‘nice job’. 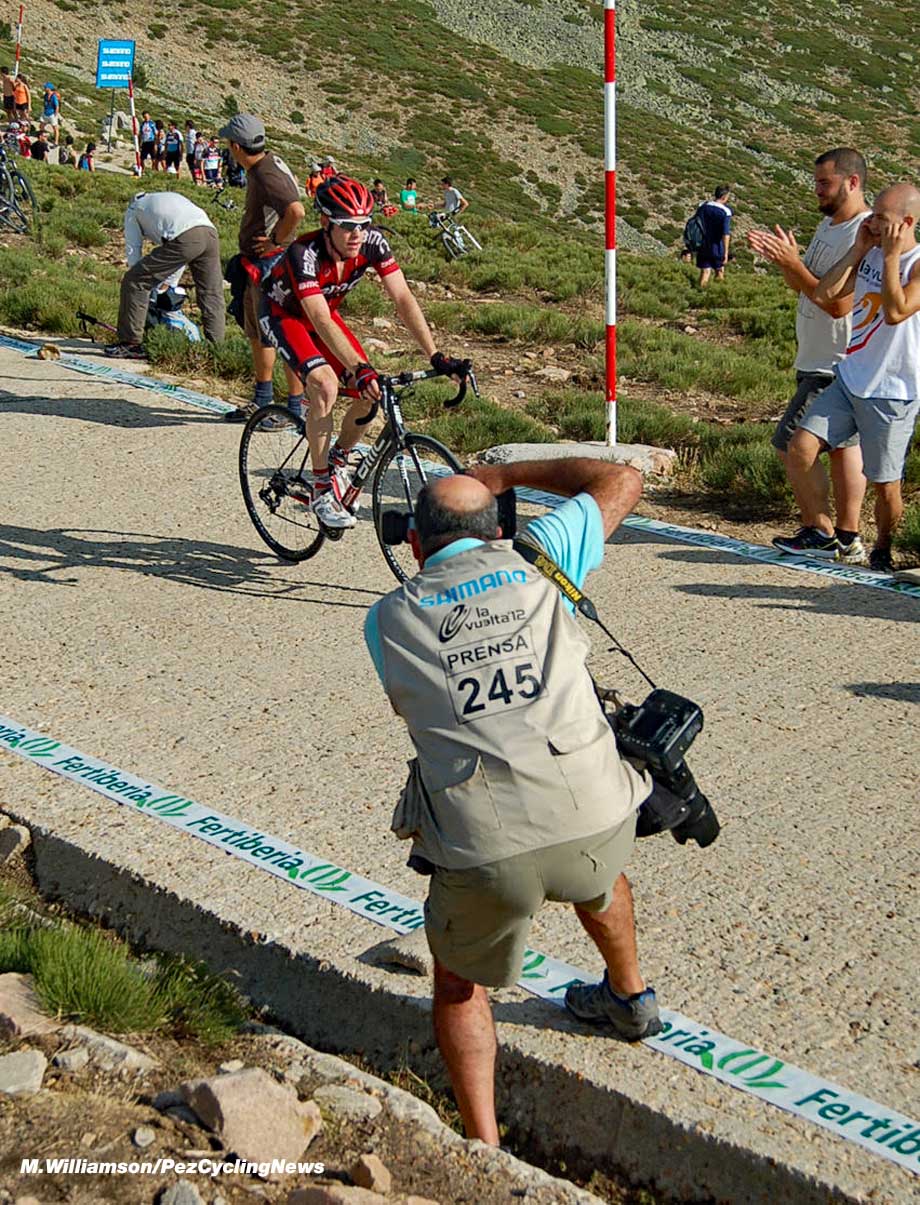 # Ed and Martin wish they were on the Alto de La Covatilla this Saturday afternoon, but… Stay PEZ for the full stage 17 race report. #