With the Aussie Nationals and Tour Down Under looming closer we thought it was time to look at one big name Aussie star who won’t be riding this year, the great sprinter Robbie McEwen. The green jersey winning, wheelie master McEwen retired earlier in 2012 but his many achievements in the sport still live on in a lot of fan’s minds. Let’s take a closer look at his career that started at Rabobank before finally ending at GreenEdge with over 130 Professional victories. 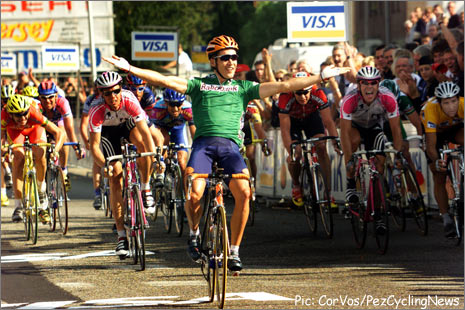 Although he didn’t claim many wins in his early Rabobank years compared to his time at Lotto, when Robbie did win he made it look easy, like here in the Tour of Holland in ’99. 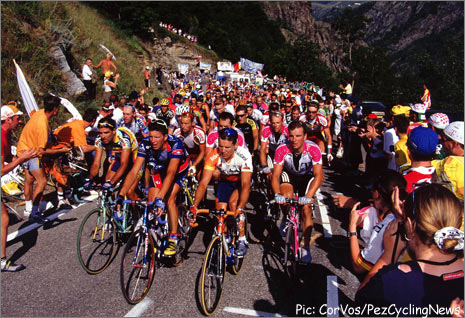 Even in his very first Tour de France for Rabobank in 1999, Robbie took control of the gruppetto in the mountain stages to control the effort in the cols so that the group would make the time limit. This was a role he would take on for many years to come with many pros following the advice from their directors and teammates on the morning of a mountain stage of ‘Follow McEwen’ to get through. 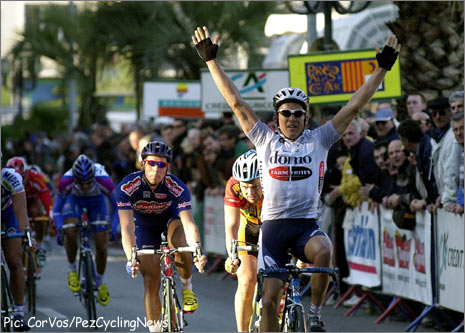 2001 was somewhat of a quiet year for Robbie but he did get some good wins, including this one at the Tour of Holland. 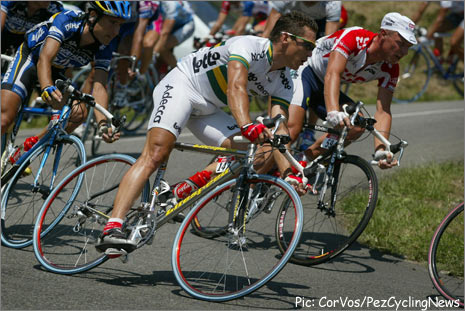 2002 was a breakout season for McEwen winning the Australian championships in January for his new Lotto team and then winning across the World all year long. Wins that year included multiple stages in the Tour Down Under, Giro d’Italia and the Tour de France. 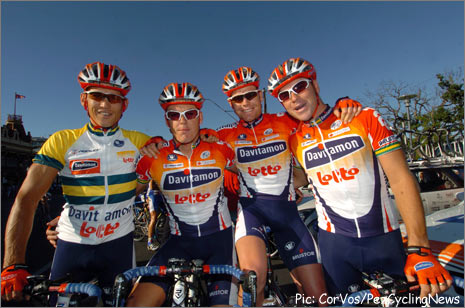 In 2005 Robbie had a lot of ‘mates’ with him on Davitamon-Lotto with a total of 4 Aussies on the team, McEwen, Nick Gates, Cadel Evans and Henk Vogels. 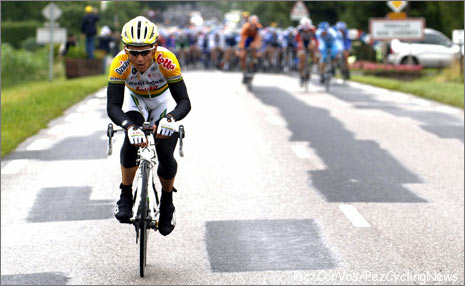 Though not often shown in breakaways McEwen was a seriously strong rider in moves – it’s just that nobody wanted to work with him when he made the break. Understandably other riders had a fear of getting rolled at the finish by Robbie so he didn’t often get the chance to shine in breakaways. 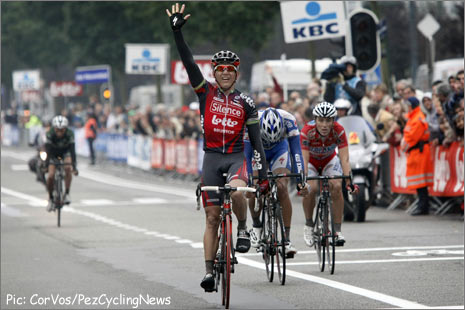 One move that did stick though was this one from Paris-Brussels in 2008. With 50kms to go Robbie found himself in a group of 11 off the front with no teammates for company. Seemingly every member of the break attacked Robbie at some point or another over those following 50kms including the 3 Quickstep riders in the break yet Robbie countered them all and recorded another superb win. This win made it an amazing five wins for McEwen in Paris-Brussels and was surely the best of the five. 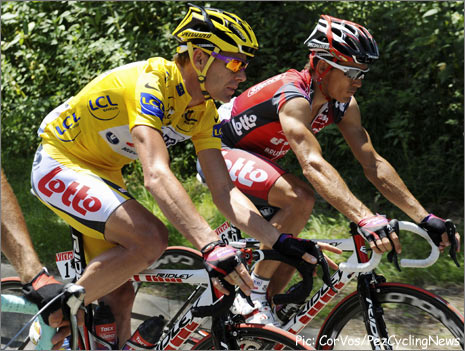 The success of Cadel Evans at the Tour de France changed the team structure forever at Lotto as management decided to concentrate on yellow jerseys with Cadel more than green jerseys with Robbie. 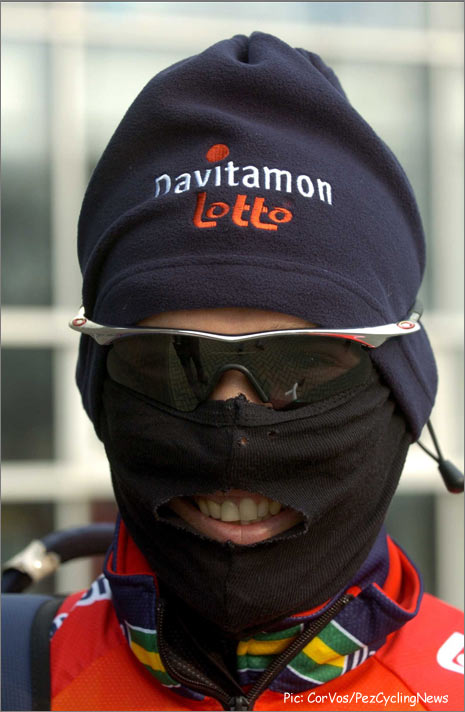 From the sunny skies and summer tempeartures of the Gold Coast in January in Australia to the cold of Belgium in February – extreme measures were called for. 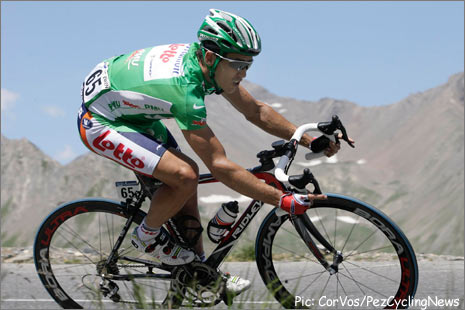 One of the best descenders in the business, watching Robbie go downhill was always a pleasure. His ability to catch up minutes on long Alpine descents was legendary. 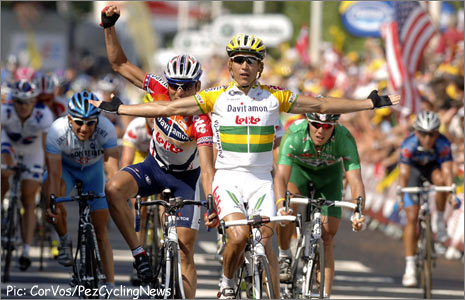 One of Robbie’s greatest wins was this stage in the 2007 Tour de France. He was off the back with only a few kilometers remaining after a puncture and crashes held him up and yet somehow he got back on to the peloton in the closing stages of the stage. He then fought his way through nearly 200 riders and took the sprint. Pure class. 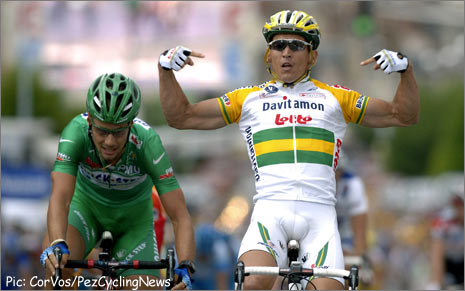 Robbie always loved a good victory salute, like this muscly effort in the ’05 Tour beating Boonen in green. 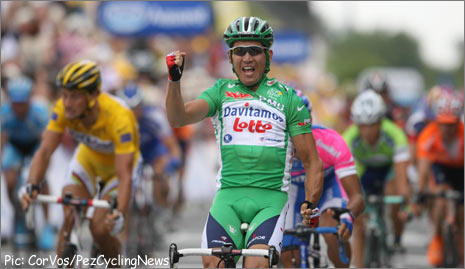 Or this ‘Runinng Man’ one in the ’06 Tour also beating Boonen who was in yellow this time. 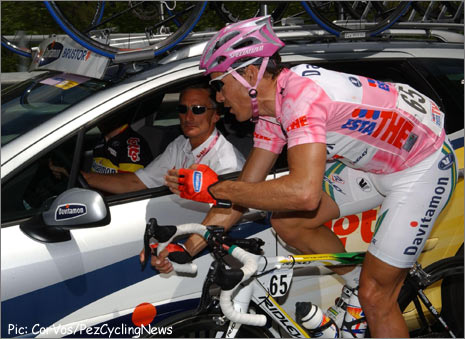 Giro d’Italia 2005. McEwen in the leader’s pink jersey chats with fellow Aussie and his director at the time Allan Peiper. Robbie won a total of 12 stages at the Giro in 9 participations but never finished the race, instead preferring to pull out early to prepare for Le Tour. 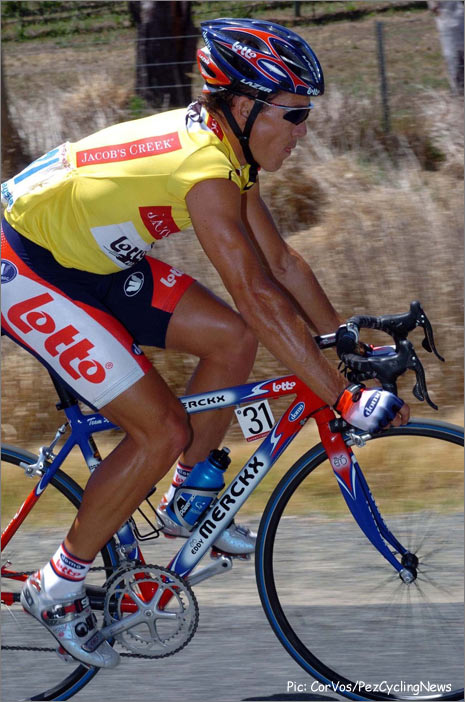 A prolific stage winner at the Tour Down Under McEwen never won the race overall with the GC just alluding him on a couple of occasions. 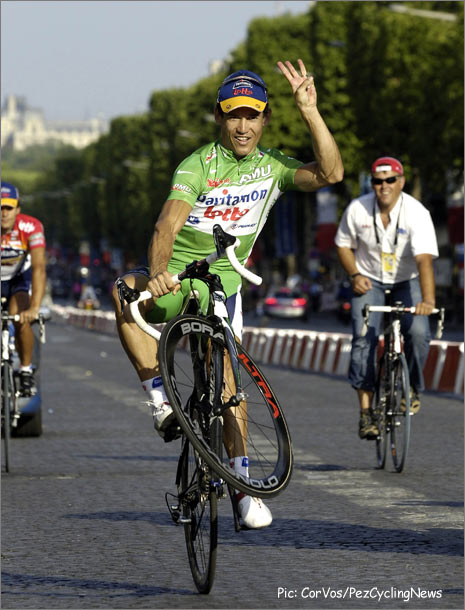 Robbie performing his signature wheelie on the Champs Elysees in 2006 to celebrate his third victory in the green jersey competition. 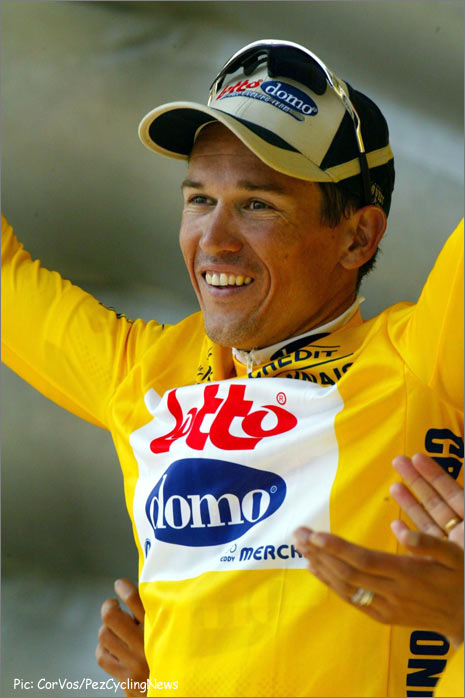 Despite often being well placed in the first week of the Tour, Robbie wore the yellow jersey just once. It was back in 2004 that he claimed the famous tunic but he lost it the next day following the team time trial. 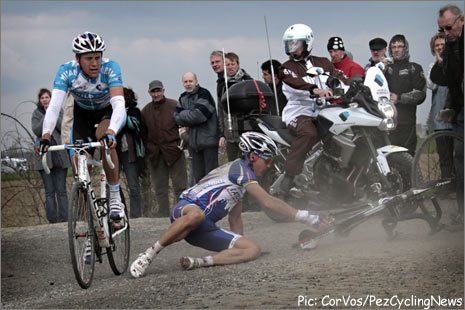 With his BMX skills from his young days, his tough character and superb handling skills you would expect that Robbie would have excelled at Paris-Roubaix but he only raced the Hell of the North a couple of times in his career and it didn’t quite work out as planned. 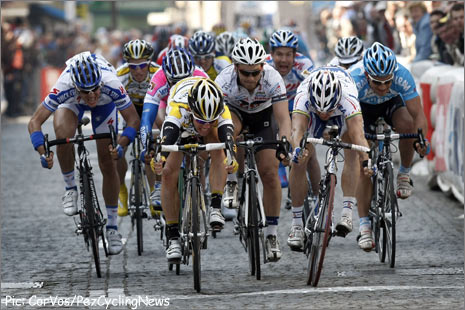 Mark Cavendish was a huge fan of McEwen as a teenager and took great pleasure in finally coming up through the ranks and being able to challenge his hero – and even beat him as was the case here at the Three Days of De Panne in 2009. 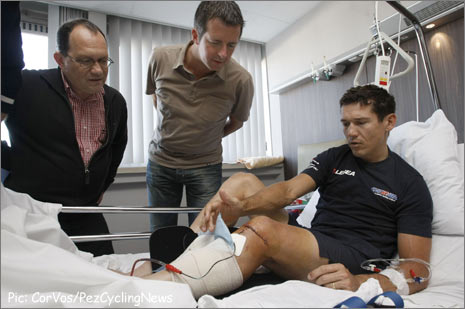 Robbie severely broke his leg in the Tour of Belgium in ’09 making that season a write-off and this injury would go on to affect him for the rest of his career. 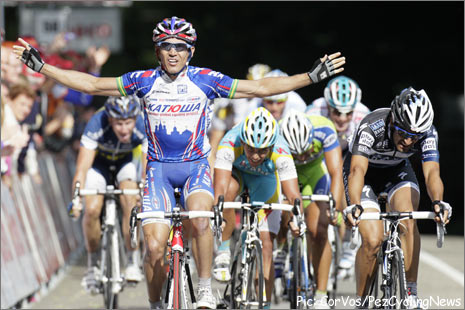 We finally got to see Robbie back in the winner’s circle at the Eneco Tour in 2010 after a very long recovery period from his injury which looked likely at one stage to end his career. 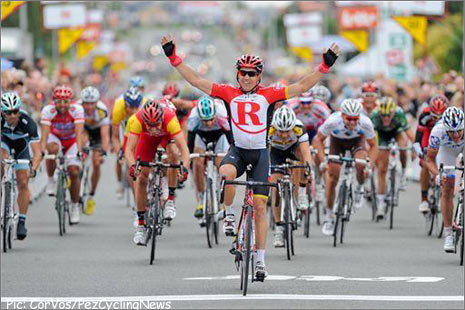 At the end of 2010 RadioShack rescued McEwen from the Pegasus debacle and he repaid them with this fine win in the Tour de Wallonie where he took 2 stages and the overall. 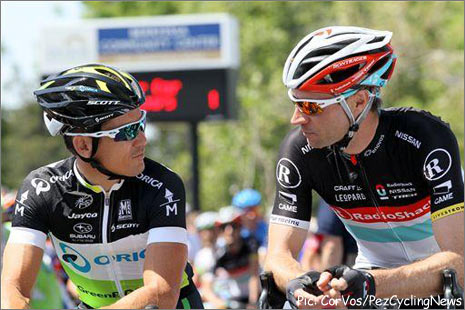 The two elder statesmen at the Tour of California in 2012, Robbie McEwen and Jens Voigt. I wonder how many kilometers these two raced together in their long careers? 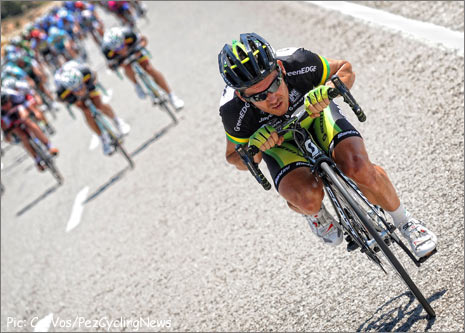 Robbie closed out his career living the dream that he’d had for many years – riding on an Australian WorldTour team at GreenEdge.