‘Girls, girls, girls !’ Sailor was the band but I can’t remember the year – that’s the tune for the ladies’ points as night five swirls and flashes to life… We’re into the final two days of the Rotterdam Six, there’s racing, music, work, and team presentations on the docket – let’s take a closer look at the finale!

I wasn’t swirling and flashing at 07:00 am, though – it was the Vacansoleil team presentation today in the Ahoy Conference Centre at 09:00 am and the ‘runner stuff’ had to be done before I bolted around the corner to be a ‘proper journalist’.

It was a good presentation; did you see the piece on PEZ?

But I have to tell you that Johny Hoogerland and Stijn Devolder whilst very different guys are both very cool guys.

The fine wine and delicate starters were just being served to my fellow guests as I headed for the lift – there was a shopping mall to visit, cake and bananas to buy… 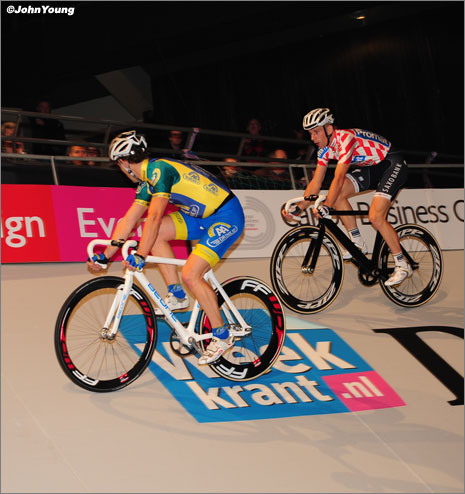 Morkov v. Van Bon – no contest, it was all Morkov.

More flowers for the boys.

When Michael comes in to change I nearly put the wrong jersey on him; he’s the black number, Jens is white – but because I notice before it went over his head it doesn’t count as a mistake, but it was close.

I’m on one rider mistake at the minute, an inside out vest – but sad to report I’m on a much higher count for soigneur mistakes.

Parking drama – well, wait ’til I tell you !

Kenny De Ketele couldn’t find a car parking space and parked right outside the glass doors. Consequently a total ban has been imposed on that part of the car park – those Belgians ! 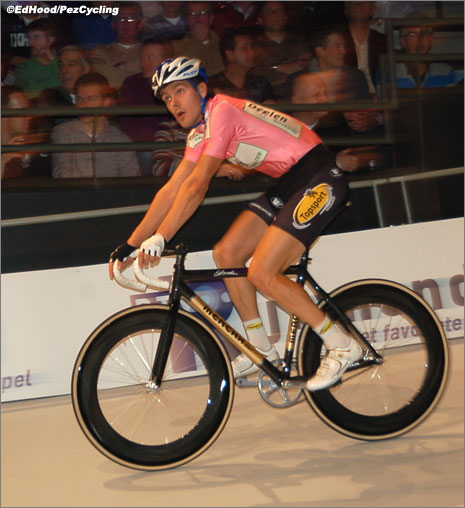 Kenny De Ketele not worrying too much about the parking drama.

On the subject of extra curricular activities; we were invited to the riders reception last night but Kris ‘passed’ on the opportunity, apparently I missed Robert Bartko dancing – wow !

Anyway, we set off on foot in search of a pizza – my internal ‘bar tracking’ radar locked-on and in no time we were in this cool establishment, good pils at two Euros a pop; Van Morrison, Sly and the Family Stone and Love Affair on the juke box and European Championship speed skating on the TV.

We had two beers, like I said to our host; ‘one more and we’d be going nowhere, tonight!’

He kindly guided us to a Turkish pizza joint which did a good job for us. 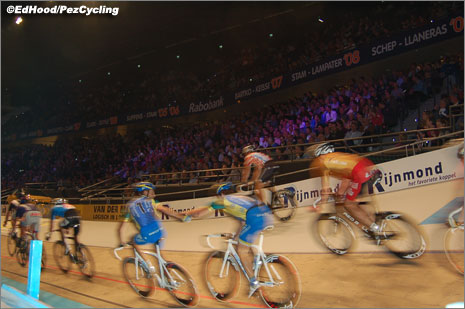 The madison fires up; ‘I’ve had the time of my life,’ it’s Jennifer and Bill on the PA – and I have to agree, before the Europop obliterates it, that is.

45 minutes + 10 laps, it’s not a good time to be having low bio-rhythms.
It doesn’t start too savagely, but they rarely do. Bartko and Ligthart go for a lap, they get half of one when Iljo decides he doesn’t like the idea – back they come. 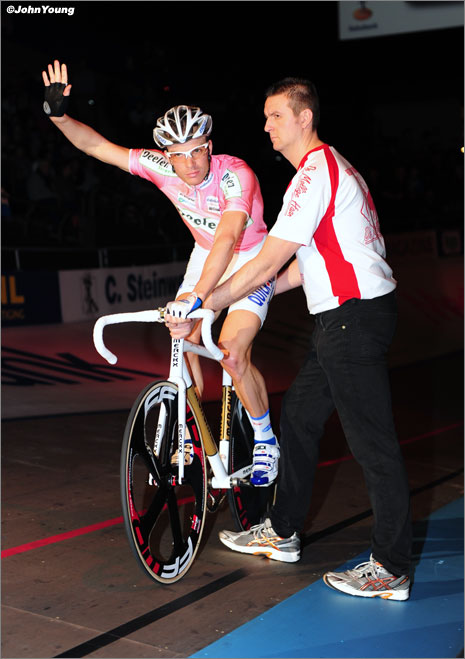 It eases, the minnows get to take a lap back.

Michael’s timing is immaculate, he’s a half a lap up in a blink, Jens Erik goes in, not as spectacular as Michael but solid, Michael again, Jens – and we’re on.

Jens Erik muffs a bottle pick up; he’s way too fast and isotonic drink splashes onto the track. 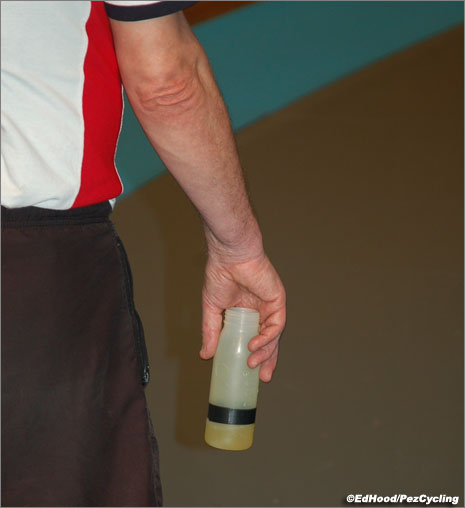 ‘You’ll have to wipe that up!’ says Kris.

It’s not as if it’s dangerous, the string is only doing around 55 kph – but I get the job done.

The fire went out after that, maybe because Bos isn’t having a good night – it ended up with Bartko/Ligthart winning – oh well!

Michael decides that he needs the track side drinks cooler – up to the cabin for the fridge; you just never know what will be next.

‘Ed, will you push Jens for Derny?’ says Jorg, the mechanic. 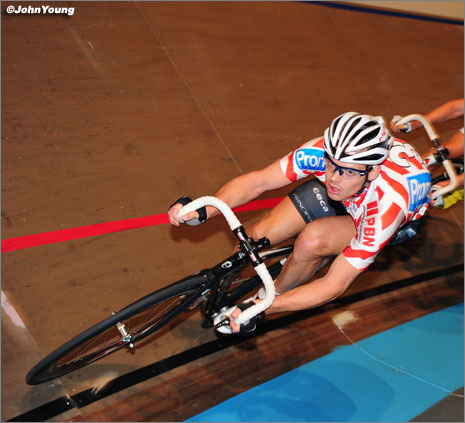 But it was fun, somehow not as serious as Gent where everyone is on edge.

Whilst the singer was doing his thing I interviewed Andreas Muller, one of the bedrock guys of the sport, if you’re an organiser and have a local road star who you want to ride your six, then Andreas is your man. 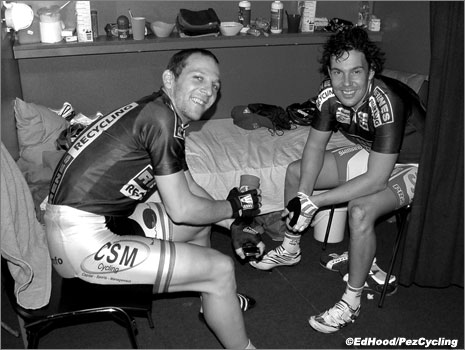 Last chase, well past midnight and even Lou Bega’s ‘Mambo Number Five’ can’t fire up the pits, soigneurs slump in stacking chairs, mechanics lock tool boxes and stare into the stands – but up there are still hundreds of hardcore fans whose heads follow every lap. 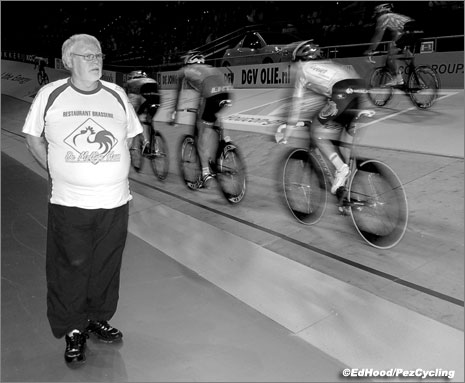 The Gibson Brothers, ‘Cuba’ and they crank the volume just in case anyone has nodded off due to an Amstel over dose.

Kris heads for the main cabin with the clothing that can be washed; I hold the fort to give the guys a drink once they finish, change them, tidy up the cabin and take the bags up.

The electronic lap board is calm, reading a row of zeros – always a sure sign that it’s not overly desperate out on the 8 x 4 ply sheets. 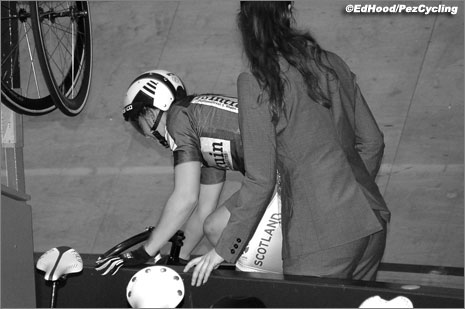 Charline gets ready for her Flying 200. 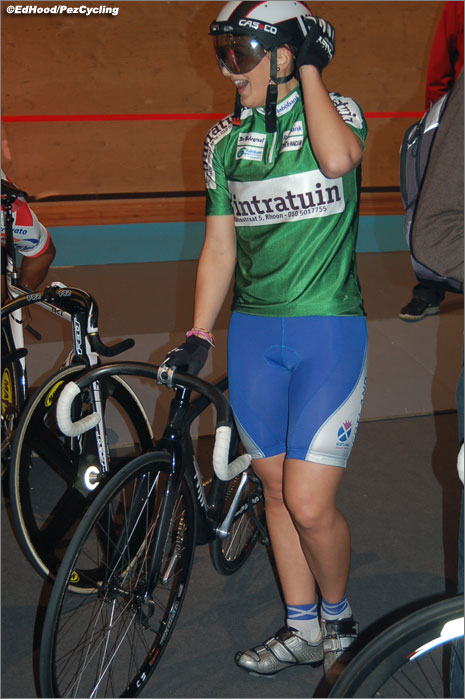 Not too long after, she was satisfied and done. 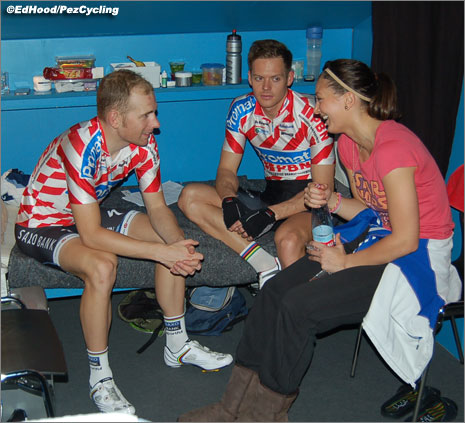 A visit to the Morkov/Madsen camp followed.

‘Murder on the Dance Floor;’ it’s hard to moan about the music tonight – live singer excepted of course.

It’s 00:50 when someone puts an axe through the PA – but wait, there’s a late announcement from the organisation; ‘We have a message for the UCi in Aigle; Kenny & Iljo are in good shape and leading the six days of Rotterdam !’

Pat’s sure to like that one if he hears about it. 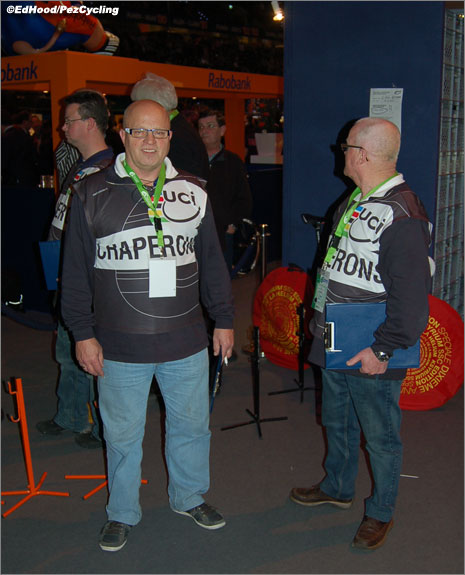 The UCI chaperones were even in good spirits tonight!

As the speaker here would say; ‘Hallelujah !’

Day 6
It’s 19:14 and the spots flash to simulate lightning as the PA blasts the noise of a thunderstorm – it’s Finale time and at around midnight we’ll know whose names will be next to get painted on the mezzanine fence.

I had one of those moments, last night, you come up the tunnel steps, the chase hurtles past in a blur of orange, green, yellow; the music pumps; the publicity girls look amazing; just about everyone is laughing or smiling; the pils flows; the speaker’s voice is full of enthusiasm and you have that diamond hard thought; ‘there’s nowhere else on earth I’d rather be at this moment.’ 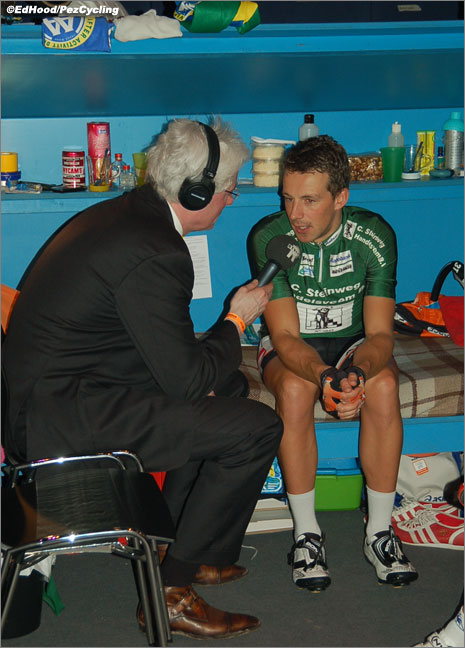 Peter Schep fields questions on the loss of his partner, Theo Bos.

It’s not as intense in my mind just now but as the ‘opening credits’ music throbs, the spots follow the riders on their introduction laps and the speaker ‘bigs the riders up’ it’s hard not to be impressed by the sheer spectacle of it all.

First gossip, Bos is out, he was rough last night – Schep will ride the individual races but not the chases. 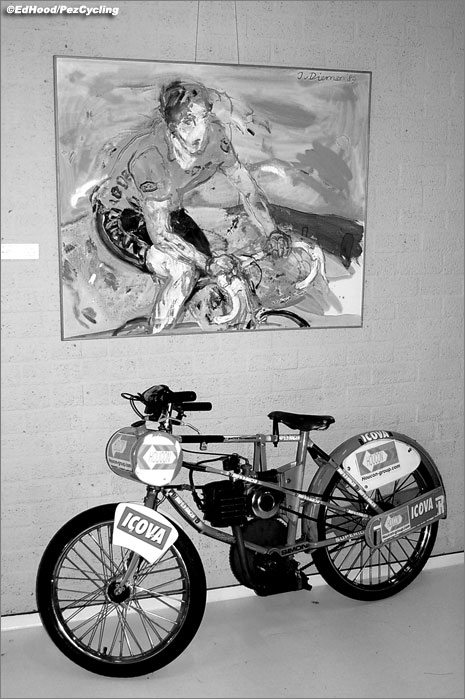 The derny – a staple of Six Day racing.

I’m glad the bookies don’t take bets on six days – I had them down to win.

I once tried to bet on a six result – my amigo, Big Pete the Bookie sent me an SMS in reply; ‘I can’t get anyone to take the bet, they all know you cyclists are dodgy ****s !’ 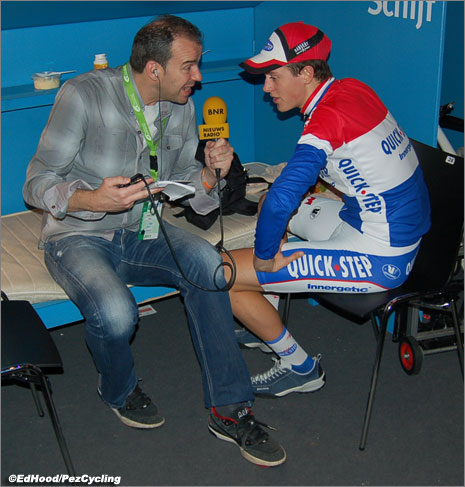 Dutchman Niki Terpstra’s pairing with Franco Marvulli would have been a good bet for the win under normal circumstances, but Franco Marvulli’s sickness put paid to those chances. Next year?

Half way through the programme they award the prizes for the U23 UiV cup event; presenting the award is former winner of the amateur six here; not to mention World, Commonwealth and Olympic team pursuit medallist, Mick Bennett of Great Britain. 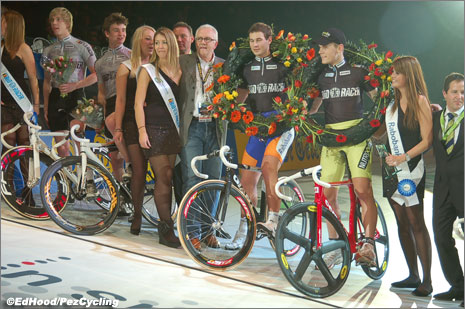 He won in the early 70’s with fellow Briton Grant Thomas who we interviewed on PEZ, last year.

Everyone is impatient, edgy, waiting for the last chase.

The minute the guys are on the boards we start to break camp – there’s Bremen to get to, tomorrow. 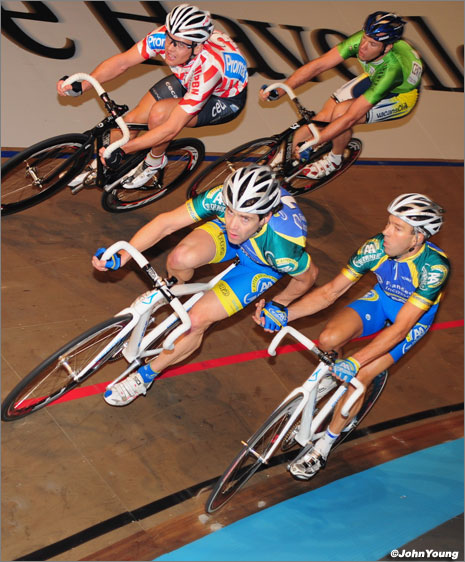 The Dutch duo of Leon Van Bon and Danny Stam had just enough to win at home.

The chase is 30 minutes old when I get trackside.

It’s about three teams; Stam/Van Bon, Keisse/De Ketele and Bartko/Ligthart.
But it’s unlikely that the German/Dutch duo can win; Big Bob is Big Bob but it’s only the thought of the German’s big hands around his throat that spurs Ligthart on – and besides, they’ll be no match for the other two teams in the cut and thrust of the lap sprints. 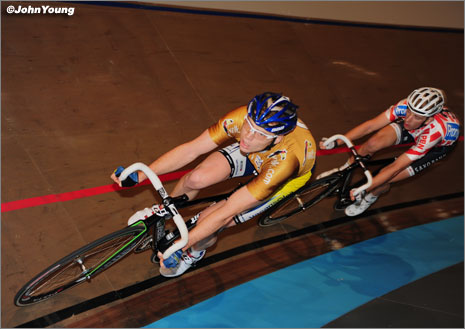 Ligthart had the fear of god from Big Bob Bartko driving him forward for most of the six days.

Michael and Jens are two laps back – but from the start the stats were against them; a Danish team has never won in Rotterdam. 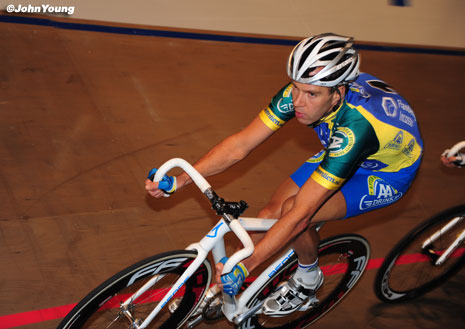 The organisation go from timing to lap scoring with 50 to go – every ten there’s a points sprint.

It see-sawed back and forth but somehow we just knew that the Dutchmen would win. 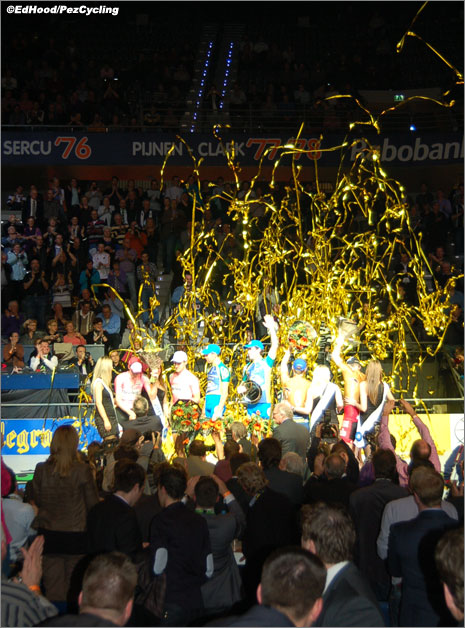 Despite the inevitability of the result, Danny must get an Oscar nomination for that victory salute routine – if there had been speeches he’d have thanked his agent, mum, kids, primary school teacher, the guy at the local filling station… 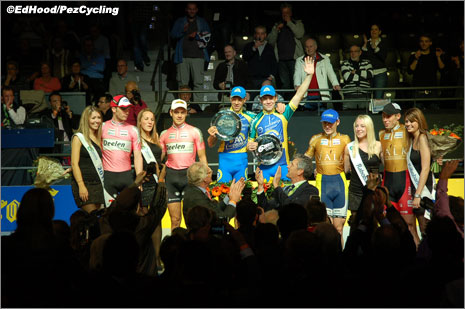 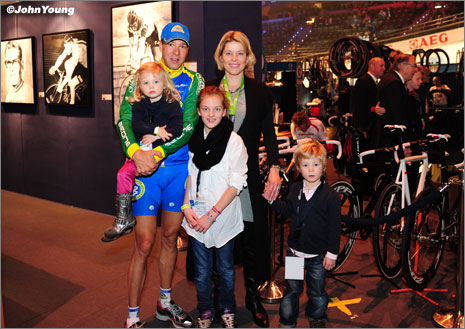 Third were Bartko/Ligthart and fourth were our men from the North, Michael and Jens.

. . . and now it’s Wednesday at 10:00 am and we’re as flat as two squashed pancakes, all out of adrenalin with 80 K still to go to Bremen.
We drove for a couple of hours, slept for about five hours and hit the trail again around 08:00.

I’m off back across the North Sea whilst Kris is heading for the Six Days of Bremen. 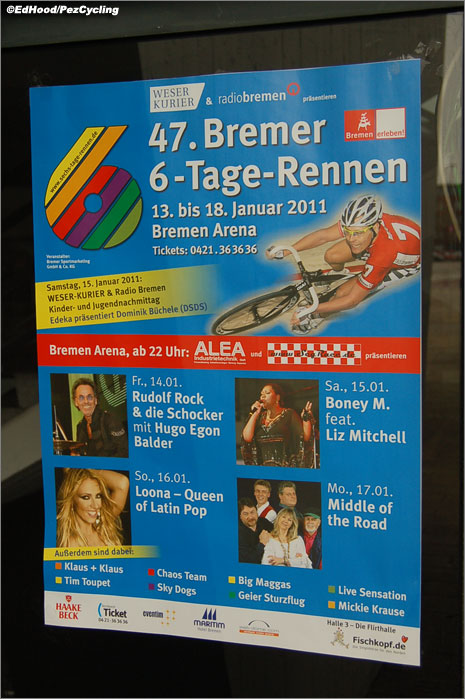 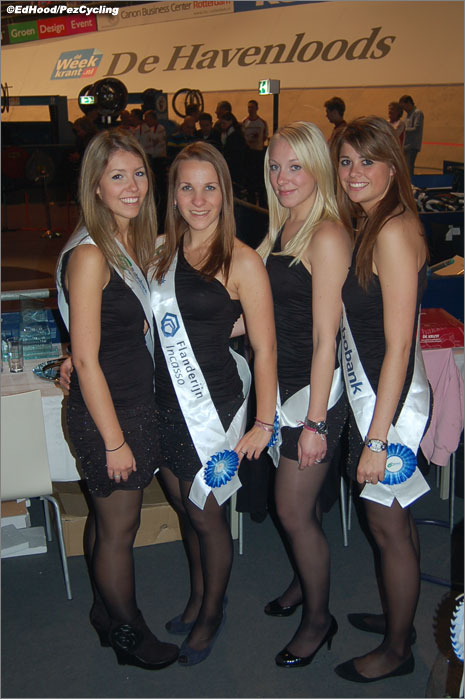 The ladies of the Rotterdam Six.

I’ll be at the finale in Berlin – I hope you’ll be there with me, thanks for reading.