Rotterdam Six: The Surreal World Of A Six

Supermarkets! I hate them; but during a six when you have to go and do the shopping in the local mall, they’re surreal. A six is it’s own little world, a bubble, a parallel universe – the ‘real’ world of kids, shopping bags, window displays, hyper teenagers and long suffering husbands seems distant, unreal.

It’s comforting to come back to the cabin, the pre-race calm, the neatly folded clothes, the towels hanging up to dry, the shoes, the helmets . .

I stumbled up to the cabin and the sweet relief of a hot shower. The cleaners were in; ‘I’ll go down to back stage and sort out my pictures.’

Back stage and my eyes just weren’t working, ‘I need water,’ over to the fridge, grab the cool bottle, splash my face, this water is sweet – Sprite, aaahhh !

The shower was beautiful.

When I went down to back stage for the wi-fi to send my pictures, I met Bobby Traksel (Holland). I got some nice shots of him at the top of the Kwaremont when he was on his way to winning the 2010 Kuurne-Brussels-Kuurne. 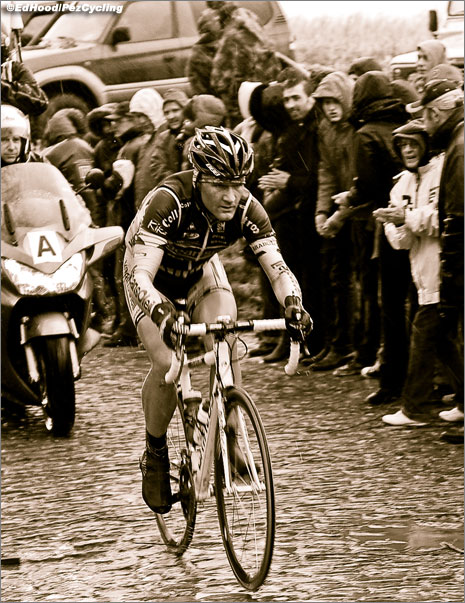 I sent the pics over to him and we got to chatting about his lucky escape from Pegasus to Landbou. He told me that eight riders now have contracts, but 17 don’t. He also told me that there are 25 top line team personnel left high and dry. One of the DS’s, a high profile name in the sport, paid Ђ50,000 to buy himself out of his previous contract only for Pegasus’s wings never to sprout. One of the female soigneurs can’t get a team and is looking at taking a job in a bar.

Bobby is highly motivated; he’s done the big base kilometres and is relying on the Rotterdam – and then Bremen – six days to give him the speed. He kicks off in the Marseilaise then Besseges.

Franco is out of the race, his pairing with Terpstra was billed as ‘race favourites.’ 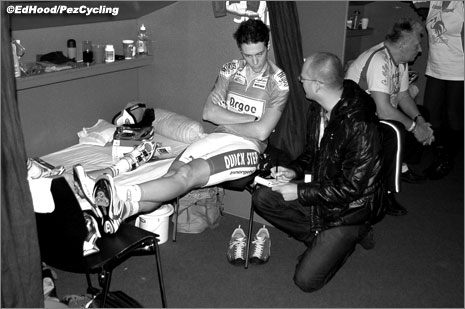 Netherlands road champion Terpstra is a big draw and has to be kept in the race. To that end he’s been paired up with tall pursuiter (silver in the 2006 Worlds) Jens Mouris. Big Jens’ partner, Jos Pronk goes home to facilitate the shuffle – he won’t be too unhappy, he’ll get his contract.

19:48 – we’ve had the rolling presentation, the points race is on and the Four Tops are smooth and sweet; ‘I can’t help myself . . 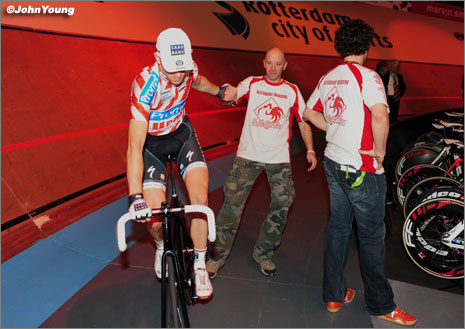 Michael comes in after his spell, I go to change him, ‘I didn’t sweat,’ he waves me away.

Jens Erik is still in the action and Jeez! we’ve won it ! – first flowers of the race.

Then it’s team devil time, Abba, Boney M, Blues Brothers; Michael looks sharp, Jens Erik rides tempo on the front, smooth, strong as befits a man who can ride 3:56 in a team pursuit – Terpstra puffs out his cheeks on the wheel.

But Schep is too quick for Jens at the end – damn!

‘A good start,’ says Michael as I change him. 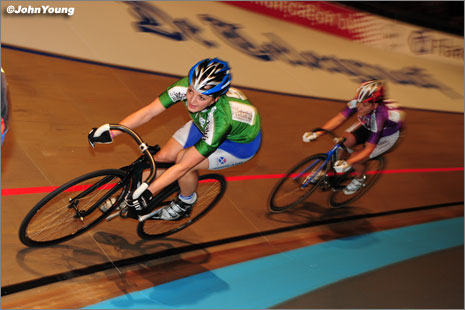 The ladies points race and the Spice Girls; I’d best tidy the cabin, the Copenhagen Six organiser, Hans Elmgreen has come to visit ‘his’ boys. 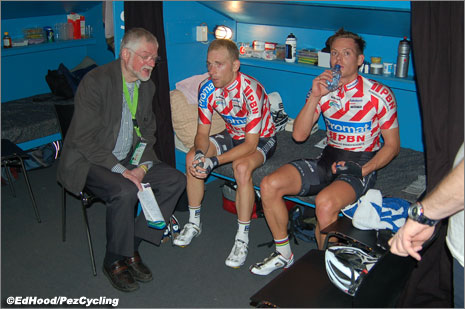 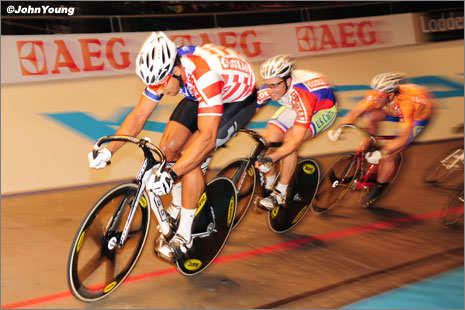 Massie led it out from way out…

It’s bright over there in the spot lights, big push, he’s away. 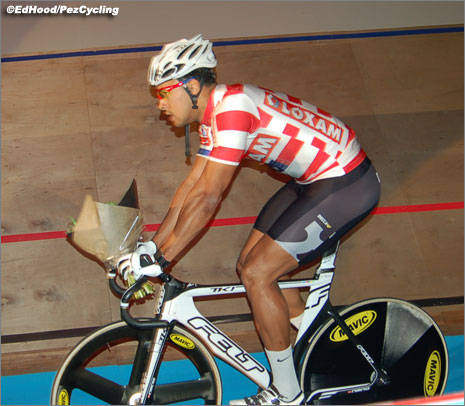 And took home the flowers!

He leads out from 10 miles out and wins, nice one – must have been my push.

20:45 – the chase is rolling, get the basins ready for the guys washing their faces, get the bottles ready in case they want a drink.

The chase is quick, early.

Terpstra is hurting on that 54 x 16, he’s riding a bigger gear than the specialists, he came straight from training camp and hasn’t found his track legs.

Iljo is on five spoke Mavics front and back with white strip tubulars – he’s serious. 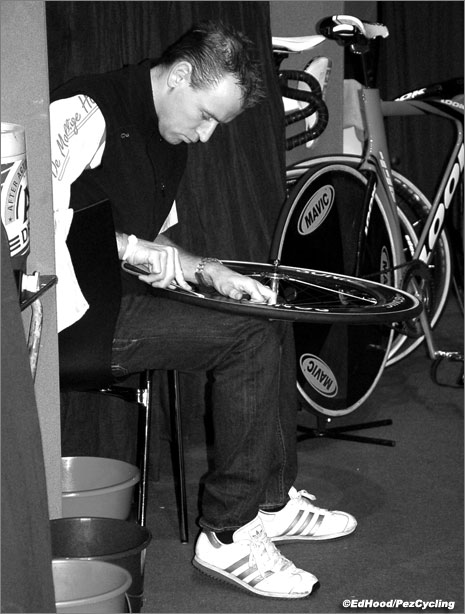 Van Hummel suffers whilst Big Bartko yells at partner Ligthart who’s not having a good night.

Our guys are strong, Jens is looking less pained when he’s ‘out’ of the race. In fact, they look so good that they’re marked very tightly, particularly by Keisse & De Ketele. 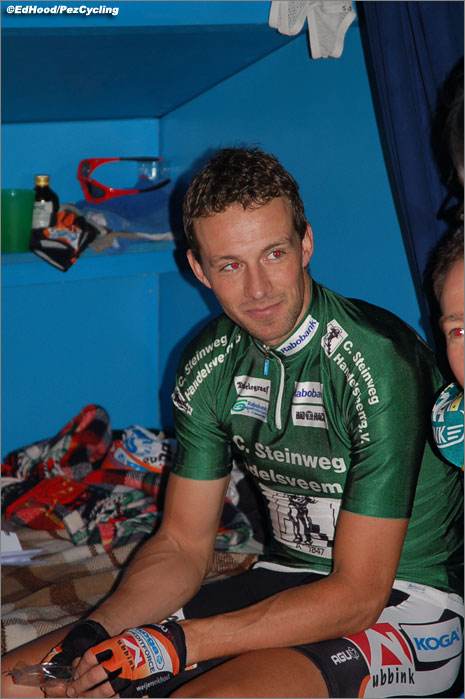 Schep & Bos look good to me; Schep is smooth and strong in the chases and Bos isn’t that much slower than when he was world sprint champion.

But it’s Stam and Van Bon who win the chase. 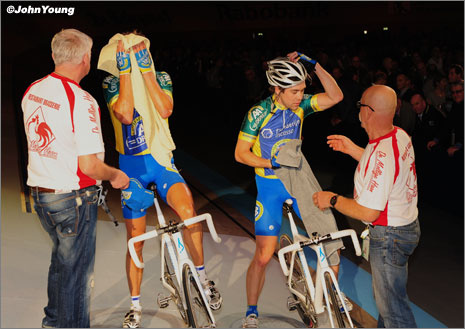 Danny Stam and Leon Van Bon wipe off after the win.

After that it all gets hectic – sort the boys after the chase; Giddeon Massie’s manager, Patrick Lyons comes to call; Michael wins the derny and needs his towel, hat and bottle for the presentation. 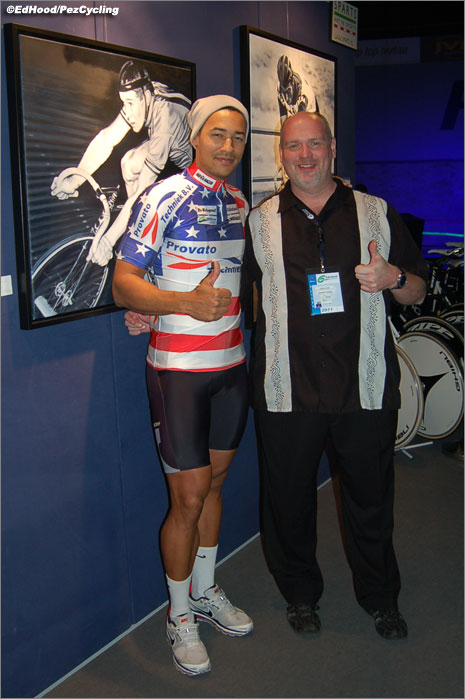 Two lap time trial, what a show – the teams follow one another seamlessly, the big tunes blast, you can drink, chat, eat nice food as the riders hurtle past at 60 kph and more.

Finally, at gone midnight, it’s the last chase and tidy up time.

It should be a little ‘potato’ chase but six day races have a way of dealing ‘surprise’ cards and late in the night Vermeulen and Stroetinga come down on that unforgiving plywood. 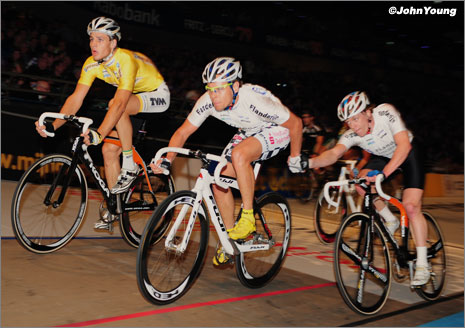 Wim Stroetinga and Leif Lampater during better times. Stroetinga would come down in a heap at the end of the evening, breaking his collarbone.

It’s hospital with a suspected broken collar bone for Wim – that’s the start of his road season compromised.

The sixes may have pretty girls, lots of laugh and decent money – but they bite, too.

DAY 4
“Tell me where the cabin key is” says the SMS – he always catches me on something, it’s in my pocket and I’m in the track centre.

It’s a lunch time start, today – and an early finish, that’s cool but you have to be up early. 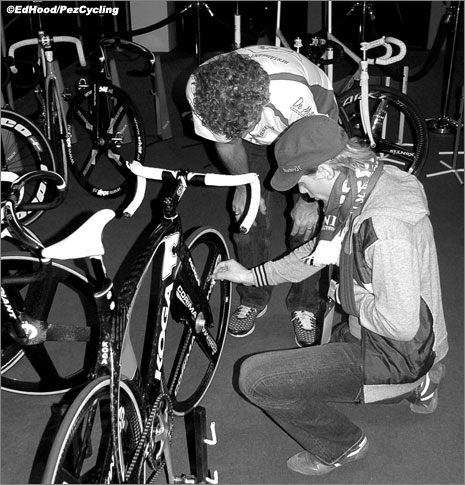 Wim Stroetinga returned the next night to survey the damage on his steed following the crash that put his arm in a sling.

My eyes weren’t too keen on sparking up again this morning, the magic shower did the trick though.

I wonder if Robbie Williams knows he bump starts the Rotterdam Six Day, every night ?

‘Let me Entertain You !’ 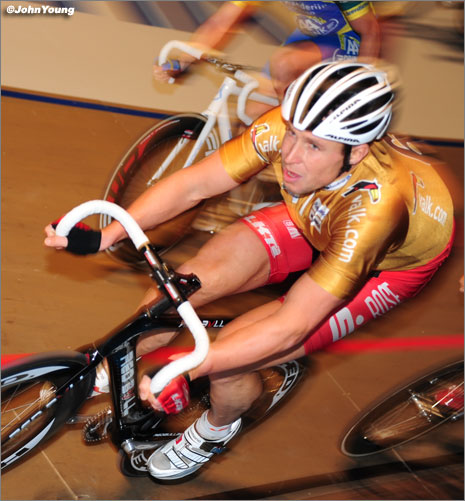 Bartko rolls round the slow running board, on the top of the bars, he eases himself out of the saddle for a few revs, looks around at the crowd and bumps up on to the track – another day at the office begins. 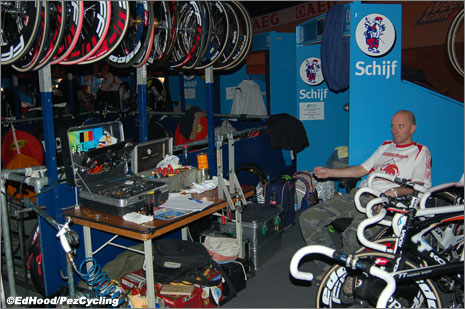 There’s more of that ‘musical riders’ stuff, today – Pronk has returned to ride with Mouris, whilst Lampater, who was with the unfortunate Stroetinga – now rides with Terpstra. 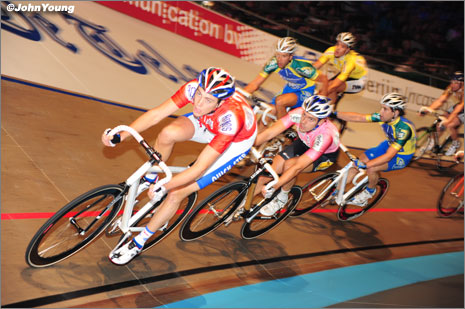 Lampater is solid, stronger than Mouris; it’s important for national champ Terpstra to show as strongly as possible in the final standings.

It’s a shame that names like Lampater, Mouris and Stroetinga aren’t well known – back in my youth there were always six day reports in the Cycling Weekly magazine and all of us knew who was who on the winter boards.

Pro cycling isn’t just about the Tour and Classics. 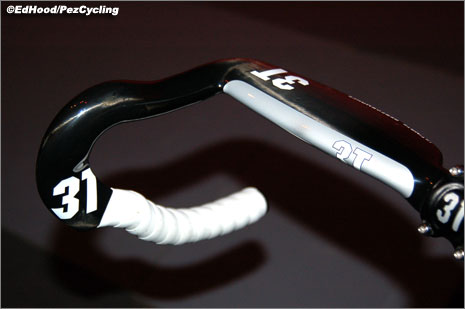 I caught up with Peter Schep’s Koga today, to check out the handlebars. They’re the 3T ‘Cameron Meyer’ jobs, specially moulded from carbon to give you an additional riding position on the tops. They work well for Cameron and for Peter Schep but aren’t things of beauty to my eye; especially when Schep rides with the tops pointing upwards – and they ain’t cheap, Dirk reckons 400 Euros. 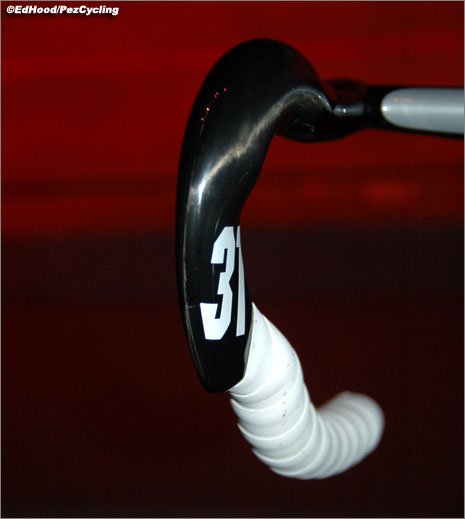 I don’t know if they’re 100% track legal, either; at the Commonwealth Games in Delhi, Meyer was on his way to the start of one of the bunch races when the UCi commissar stopped him and made him change his ‘bars. As Evan Oliphant – who was riding the race – said; ‘it made Meyer so mad he lapped us three times instead of just twice!’ 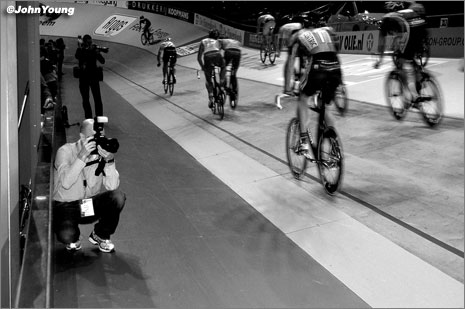 The ‘Keisse Affair’ rumbles on – Ivan sent me an email today; the word is that the Belgian Government are non too chuffed with the UCi apparently ignoring European Union law. It’s difficult to see where this one is going to end – but Iljo just keeps taking those laps. 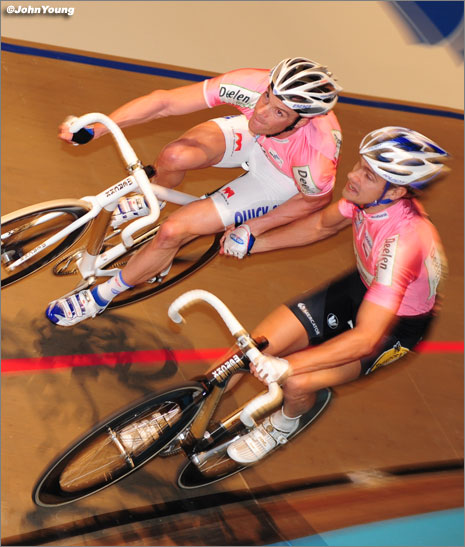 The Belgian duo of Keisse and De Ketele.

Michael and Jens Erik took a beautiful lap; De Ketele/Keisse had been on the attack but were neutralised and just as the lull came Michael went over the top, classic stuff, a half lap up before anyone knew what was going on.

Bos and Schep took the madison though, they look good enough to win, to me. 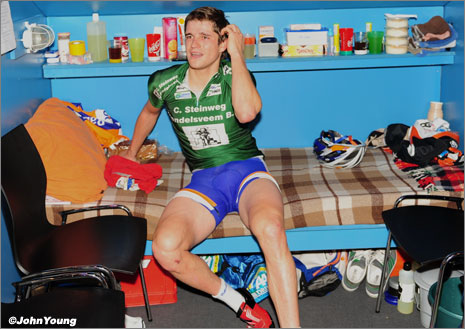 When Gregory Bauge was up for the sprint round which followed the chase, they played a kind of lazy, laid back French rap thing – it was tres cool. 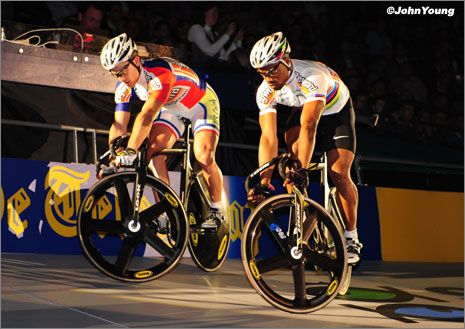 I’m picking up some of the speaker’s vocabulary; ‘Hallelujah !’ when a lap is gained and ‘Ja ! Ja ! Move it ! Move it !’ when Bauge is on a charge. 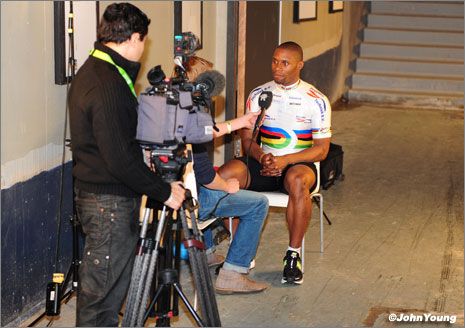 I just noticed today that when a rider gets eliminated in the devil, his face comes up on the big screens, then a paint brush graphic draws a red stripe across his smiling face – cool. 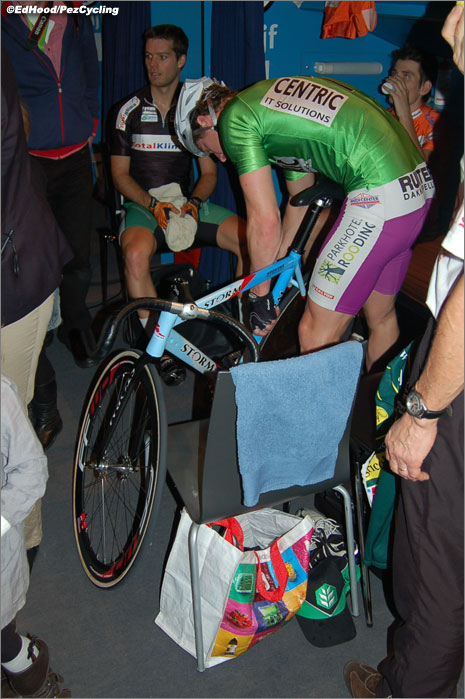 It’s a hard situation for riders on small contracts and no mechanics.

A few of the small teams are on small contracts and can’t afford mechanics or helpers, wrestling with recalcitrant bikes in the middle of riding a six isn’t recommended.

Bos won the derny with a 63 kph last lap.

And the flying two lap time trial, with Schep, in a time almost as quick as the specialist sprinters – they’re hot. 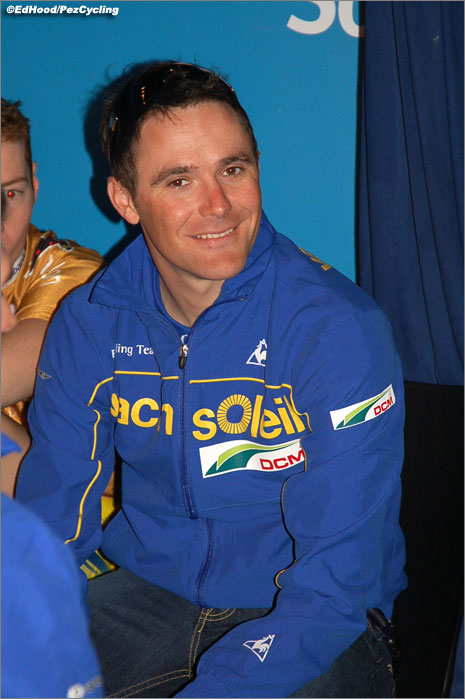 On the subject of sprinters; Vacansoleil fast man, Borut Bozic paid a visit, today – he looks fit, sharp and ready for the new season.

As a prelude to the last chase, the mad guy on the mountain bike hopped up the stadium stairs; then down them – with no front wheel. 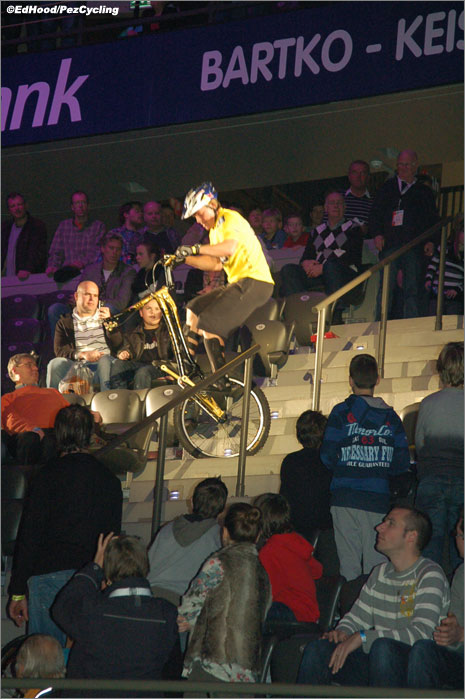