“Vingt-et-un en tкte!” – I don’t know a world of French but Italian is not so different and I start to think what can it mean. The old guy is looking at me while I proceed on my first cobbled sector of the day, checking a nice place for make photos. He repeats “Vingt-et-un en tкte!” 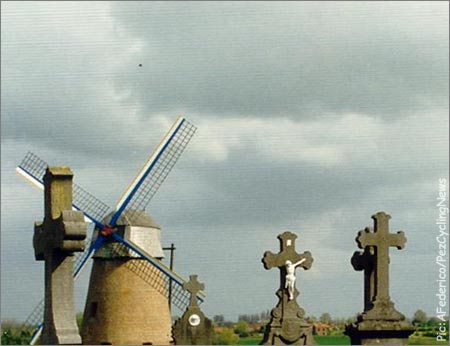 Sometimes I hate the fact when French people cannot speak a different language from their one, and to their eyes it looks so strange that nobody else can understand the French! I stop and I try to translate. I know that “tкte” means “head” (tкte de la course – isn’t it?) and I start to worry that he’s talking about my hair style. My hairs are (sorry, were) that time very difficult to control, especially in the morning and I always was unable to give them a nice look before noon time. 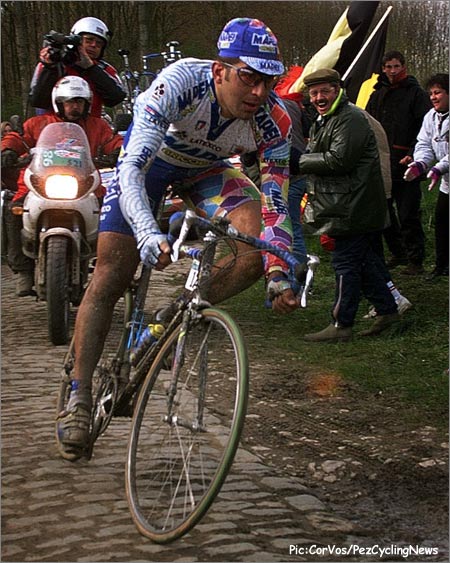 “En tкte” he insist. Other people now are looking at us and I feel so bad for my condition… when another guy, beside the old man explains “Vingt-et-un! Tкte de la course!!” – They’re talking about the race and not of my hairs, that’s enough for me to relax a bit. I finally realize: “vingt-et-un” looks like “ventuno”, is nothing else but twenty-one!

Thanks world, they’re not talking about my head and I’ve also got some information about the race. Now it’s time to enjoy my first Paris Roubaix! 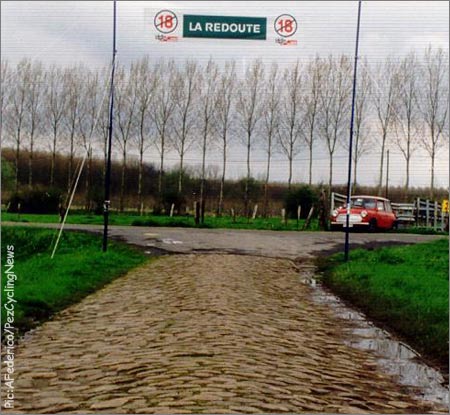 Ten years has gone since that morning on sector 26 from Quevy to St. Python. I was a student in love with cycling and I was spending my entire winter job salary on the most wonderful cycling adventure of my life. A small car (a Mini Cooper 1.3 litres), a map and a dream. To chase the Paris Roubaix.

Frankly talking the map was not enough because after the third passage in Orchies, I lost my way and I was able to see the race again just on the last cobbles sector inside Roubaix city at a few metres from the velodrome; a brand new one built by the “Amis de Paris Roubaix” the year before.

All quiet in the Trench the day before.

I lost the Pavи de l’Arbre which was one of my targets, but I never felt I missed something from that day. Everything was perfect. The countryside, the people, everything was talking about cycling. That race, as I think the Flandres, is special not only for the strength of the tradition and the route but also for the atmosphere you can feel from the day before. There you really can find what you ask from cycling, whatever it is.

The race itself gives a reason enough to get there. It’s a “just-for-champion competition” and only a few riders are credited with the victory. That time the favourite was Johan Museeuw who was winner of the Ronde the previous week. But all the Mapei Team was so strong with Ballerini, Tafi, Steels, Zanini and Peeters.

I will never forget my meeting with Museeuw the day before the race, in Compiegne, where I went just for breath the “race air”. All the riders were called to the ceremony and that afternoon I realized how strong is the French fans’ passion for cycling and how different they are from Italians. They collect everything from cycling and are able to organize pictures, caps, bottles and everything else inside magic boxes which become, year by year, small treasures. We Italians, collect everything just to do it! (but the passion is the same one).

At least Ale’s hair was tameable… after noon.

The same day I didn’t resist, and I went to visit the famous Foret d’Arenberg. It was full of mud and I still cannot understand how they could run there the day after. I cannot say that I slept during the night; I roved inside my personal world of cycling fantasies trying to imagine the next day race. But the final was every time the same one: my idol Johan Museeuw again winner in Roubaix. 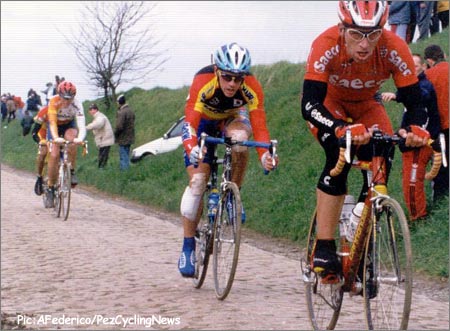 The early break thunders past.

Twenty-one ahead in the early break. A young Belgian champion, Tom Steels, inside. When they arrived at my sector they were already fragmented in different small groups. Steels was one of the first working hard. The main pack was a very long line of riders flying on the cobbles. Johan was there, he was riding well and easy. I understood what mean to ride on that surface when I see the latest. They were completely in trouble!

I moved fast to the end of the sector 18, just after the famous Aremberg forest. Everything was changed. Still few of the early breaks ahead, but the main bunch was much less compatto. It was split in many different parts. Moncassin was one of the first.

Then I start to wait for Museeuw. Ballerini was there, Tafi was there, I could see Tchmil also. I thought that I missed Museeuw and I still didn’t know that he crashed badly in the forest.

Another move and I arrived in Orchies on a sector called “Chemin de Pries”. It was unbelievable what I’ve seen there. Mud, mud and mud. It was very difficult to walk over there and I cannot imagine what it means to ride fast on it. Steels was the first to come inside. The supporters were the other face of that hell. They were very different from the people I met in the morning. They were excited as never I’ve seen in the cycling. They were screaming and they also were covered of mud. They were part of that picture and for the first time in my life on the cycling roads I felt like a foreigner. I was attracted and scared by that scene. 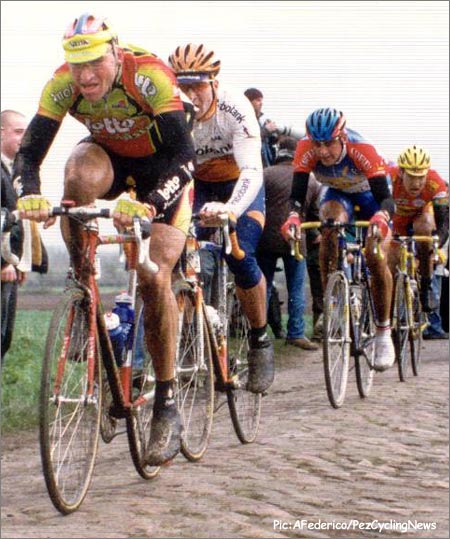 There was no more bunch. Small groups. Tchmil was one of the last. Again I couldn’t see Museeuw but I didn’t care too much because I wasn’t able to recognize anyone in that hell.

Then I lost the road. You cannot imagine what it’s like to drive in the Lille hinterland. The names you find are written in Flemish and I wasn’t able to find the way to the Carrefour de l’Arbre despite months of preparation on the maps.

I arrived in Roubaix when the riders were still on the cobbles of the last sectors. Ballerini was ahead. An Italian ahead in the Paris-Roubaix but… I was looking for Museeuw!

Someone told me he was out of the race. My enthusiasm died there. I felt tired and so far from my home… Than Ballerini arrived, alone, with more than 4 minutes on the second.

Franco Ballerini – another win for the Italians.

Again one – two – three of Mapei team with Ballerini, Tafi and Peeters. It was cold and cloudy in Roubaix and once the race was over my only thought was the long way I had to drive to be back in Italy. Today I look to my pictures and they give me all the warm I missed that day. “I’ve been in Roubaix” – “that’s the proof. I’ve really been in that hell!”.