Roubaix Does PEZ: Paying The Piper

After riding the final 17 sectors of Paris-Roubaix yesterday, and typing to you with still swollen, sore, and blistered hands, I understand to my very core that Paris-Roubaix is a race like no other. It is a contrary beast that lies waiting for you to weaken, to slow. I had my moment of weakness late in the day, and, as always, there’s a story to tell…

We started early on a beautiful Friday morning. The ride was further brightened when Mr. Scott Sunderland showed up, another of the perks organized by Velo Classic Tours . He was going to accompany us for most of the ride. We were going to ride the final 17 sectors – from Arenberg to Roubaix. 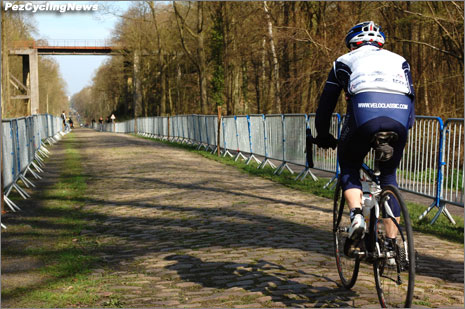 Arenberg was tough, but it was nothing like the end of the day.

This isn’t the story of the whole ride though. This is a story that starts with Sector 6 in Cysoing. We had covered 11 horrendous sections of cobbles already, but it was only now that the unfun would really begin. Up until this point, the cobbles had been tough, but in a way fair. 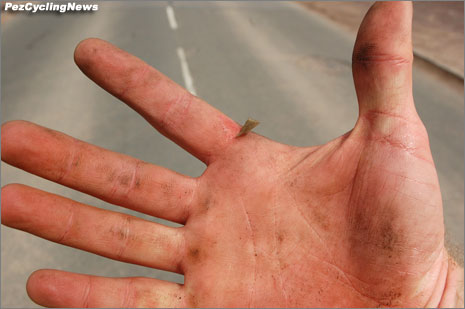 My hands were falling apart and I ached, but it was nothing so far out of the ordinary. The roads were indescribable, and the ride was far from pleasant on them, but it was pretty cool. 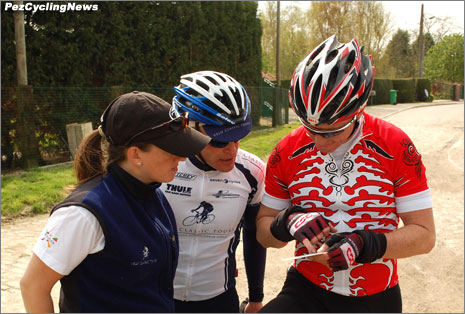 It was about to get even cooler. Lisa Easton, the better half of Velo Classic Tours had stopped the van at the beginning of Sector 6. This would be our last refueling point and Scott’s departure for home point. We enjoyed some pastries, drinks, said good-bye to Scott and then there they were – the QuickStep boys, complete with their new retro kits. 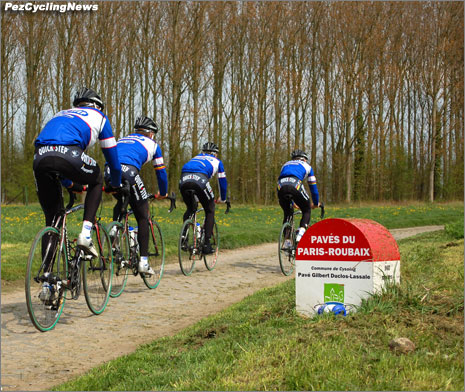 That was pretty cool, but it wasn’t but a few seconds later that the Milram team came rolling through. Milram isn’t a team that you really think twice about when it comes to Paris-Roubaix…except for one particular rider. You might remember him, he took one of the nastiest Paris-Roubaix’s in history back in 2001: Mr. Servais Knaven. 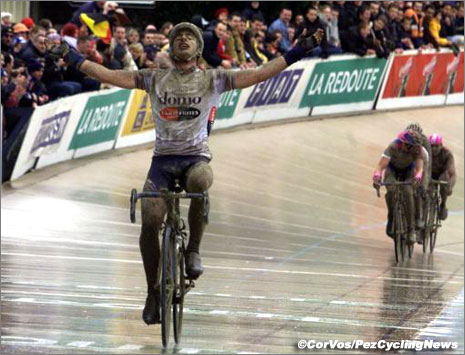 Knaven has faded a bit from the collective conscience, but the roads haven’t forgotten him. 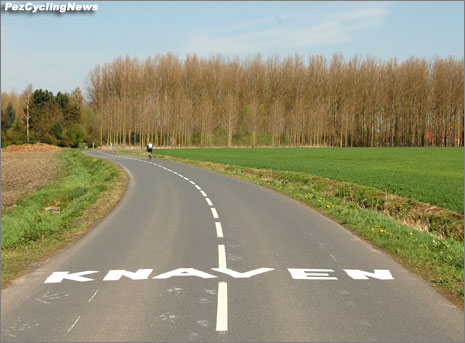 But suddenly there he was. It struck a chord in me. He was just as much a champion of these cobbled nightmares as Tom Boonen was. He too has his name etched in a gold plate on one of the Roubaix shower cubicles. I hopped on my bike and chased after him. 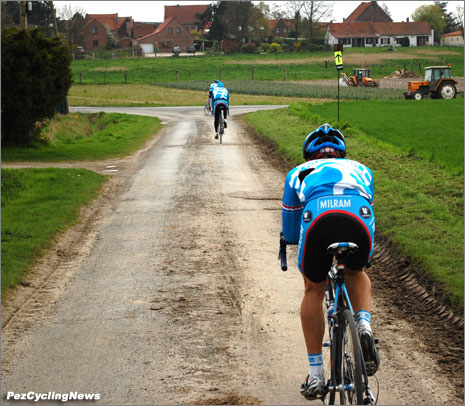 I didn’t even really want to talk. I rode the cobbles behind a man that had won over them. I watched how he moved, how he sat, what gear he was rolling, what lines he was taking. I just watched. It was special. I guess it’s just one of those rare moments when you can follow a champion…without hordes of other people around. I couldn’t do this with Boonen or Cancellara or O’Grady. Not a chance, but there was Knaven, plowing his lonely furrow across the Cysoing rocks on a gorgeous Friday in April. 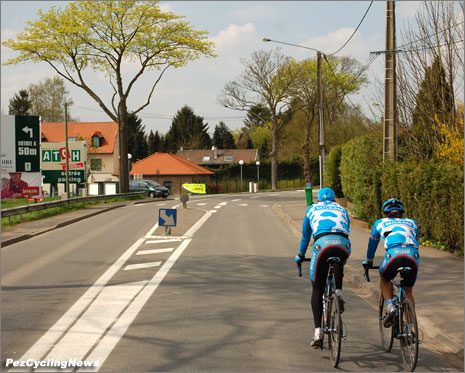 He caught up with a teammate not long after that, so I followed at a respectful stalker distance. I was enjoying the nice pavement. After his teammate turned away, I rolled up and said hi to Mr. Knaven. He was friendly enough, smiled, and we started chatting.

Then we rounded a corner and I’ll be damned if we weren’t right where we had just started this whole story. We had looped around back to the beginning of the Cysoing section.

You’ve got to be kidding me. Of course I had to play it off. Oh yeah, I meant to come back this way. I really want to ride Sector 6 twice. It speaks to me. 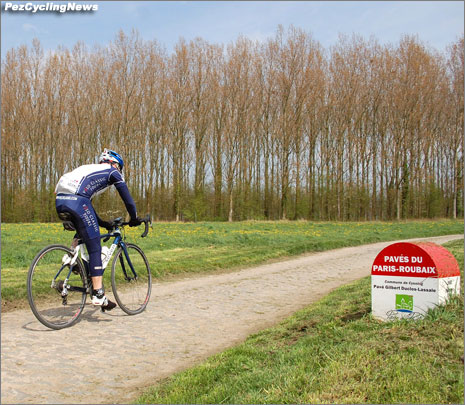 Ah yes, this scene again, except Peter wasn’t in the picture. He was probably almost to Roubaix.

I waved my good-bye, wished him luck, and got to the business of trying to catch back up to the group. I don’t even want to know how far behind I was at this point. I smashed through Cysoing then hit Sector 5 just as hard. I was flying between sectors. It was good. I felt strong. The cobbles were tough, my hands were but claws, but it was ok.

Then I ran into the anteroom of Hell – the Carrefour de l’Arbre. The main hall was but a few pedalstrokes down the way. 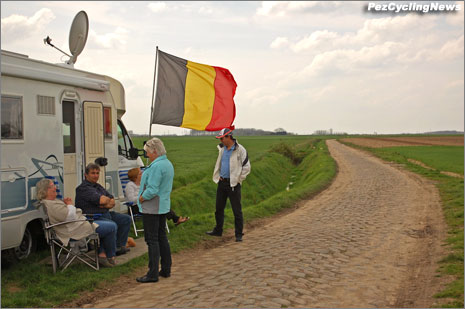 There’s a reason they’re camping out along these wicked cobbles.

I hit the cobbles nonchalantly, but suddenly things just weren’t right. This is objectively a tough stretch of cobbles. On a good many of the sectors, the road has some sort of section you can ride to alleviate some of the misery – sometimes it’s a nicely smoothed crown, sometimes the wheel ruts are a little bit smooth, sometimes you can skirt the edge and get a little dirt and grass between your tires and the cobbles. It’s not like that on the Carrefour. It’s just you and the rocks, mano e rocko. 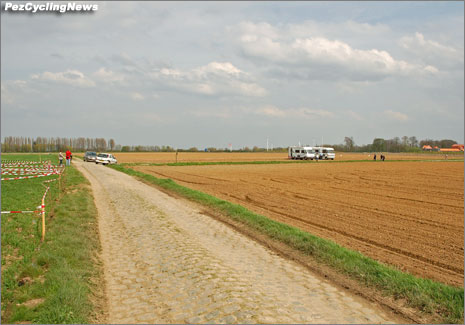 I do not fare well against rocks. These rocks pounded me. There was a stout, unfavorable wind at this point, and the cobbles just wound off into the distance, far, far away. My speed gradually crept down and I could feel each and every bang of each and every rock.

People often describe the greats as floating over the cobbles. This is an illusion. They still hit each and every one and they still suck just as bad, but when you go really fast, the bangs almost become a hum. Well, the hum that you get from a jackhammer on full blast. But my point is, the rhythm is friendlier it seems at a fast pace. Once you bog down and your speed heads southward, the hum becomes a slow tick tock on the metronome, except the tick and the tock are like a left and a right from Rocky Balboa. 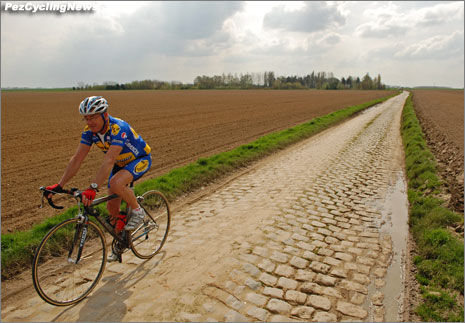 BANG…BANG…BANG. My hands were not screaming anymore. They had reached terminal suffering. All I could do was hold on, pedal as hard as I could, and make ugly faces. I’m normally a stickler for the avoidance of ugly faces. It’s just as hard to contort my face into unhappiness as it is into happiness in those moments, and you just never know when someone might take your picture, so might as well make an attempt at a pleasant visage. 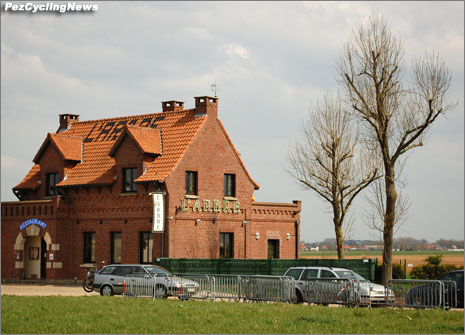 Ah the end. It wasn’t relief when I put a wheel on the main road. I felt like I had just been half saved, as if someone had plucked me from the fires of Hell, and plopped me on burning embers.

That was not happening here. I passed rows and rows of motorhomes, and they must have been served quite the treat as I rolled by, I mean, bounced by. I’m not sure, but I was probably moaning, my hands were swollen to boxing glove size, and my face lopsided, contorted in abject misery.

Yes, I think I had dug deep enough to find a little inkling of just how hard this race really is. I emerged off of that horrendous section and I knew it in my head, heart, and soul – this was a race like no other. 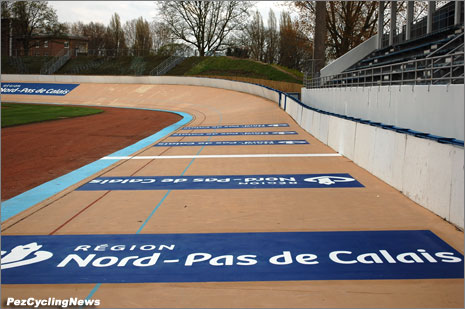 I did in fact make it to Roubaix and I did my 1.5 laps on the hallowed Velodrome. It’s a special place, that’s about the best I can do to describe it right now.

Much more to come next week – all of the goodness from the race itself, plus a full look at our 17 sector ride, PLUS a Velo Classic and PezCycling Exclusive: a trip to the timeless showers in the Roubaix Velodrome.