If there are two key things needed to enjoy the Basque Country to the fullest – it’s a healthy appetite and a pair of very strong legs. Peter Easton of VeloClassic Tours was on the scene in the Basque Country on Saturday to take in the sights, smells, sounds, and tastes of one of the year’s most unique races.

For culinary exploits, the Basque Country is the beating heart of the Spanish kitchen. And if the fastest way to a man’s heart is through his stomach, then San Sebastiбn is the aorta artery. For the cyclist, while the Basque Country offers endless miles of scenic roads, a strong pair of legs is mandatory as is an insatiable appetite for the very element that is so stunning about the Basque countryside-the dramatic joining of land and sea, and the mountains that rise above it.

This scenic landscape cradles the city of San Sebastiбn and while the views from above are spectacular, getting there can be quite challenging, the hills symbolic of what defines the region of Gipuzcoa. To best appreciate what is so charming, attractive and demanding about the region, a good pair of legs will get you just about anywhere, including the top step of the podium in the Clбsica San Sebastiбn, one of the most dramatically scenic and physically demanding races on the calendar. 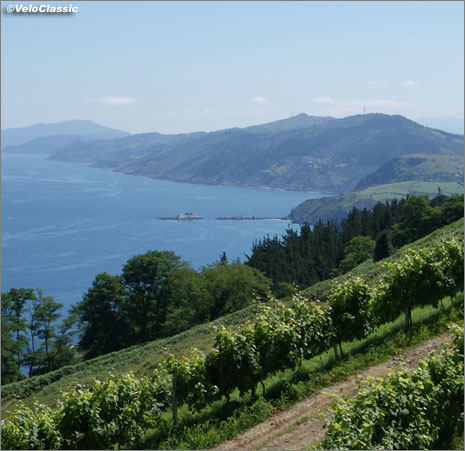 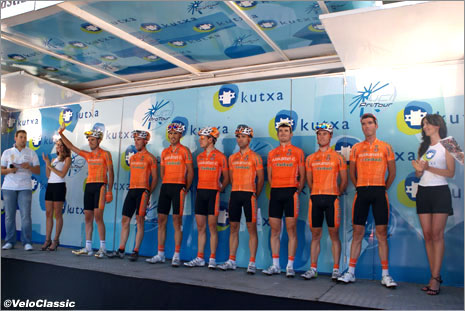 The Colors of the Day
San Sebastiбn sits in an enviable position tucked behind hills and sprawled out in an arc against the Bay of Biscay. Race day morning for the Clбsica San Sebastiбn is greeted with a milky white and blue sky that blends neatly with the city’s edge, the horizon dramatically defined by the contrasting colors of green from the collapsing hillsides and rugged edges and the remarkably deep blue from the water. The warm air rising from the water casts a lazy feel over the start village along the Alameda de Boulevard that marks the old town and connects the eastern edge of the city to the Concha la Playa. 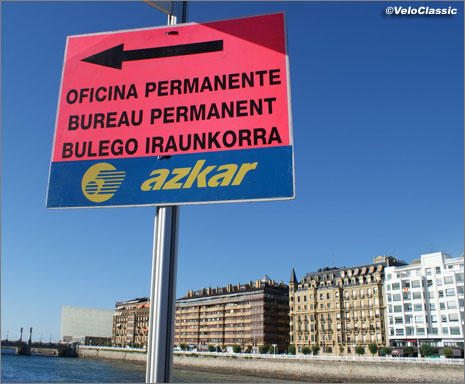 Workers moved slowly, already feeling the heat of the day. Their siesta was, unfortunately, a long way off. And while spectators and curious observers strolled the streets with an appetite for pintxos and sollitos- tapas and small glasses of beer-any professional rider towing the start better have an appetite for hills, otherwise he’s bound to get a bit queasy. There is a remarkably mellow pace to all things Basque, and race day seems to take the same approach. The city streets of San Sebastiбn were surprisingly quiet upon arrival, and the crowd swelled slowly, lazily approaching the day after what was surely a long Friday night. 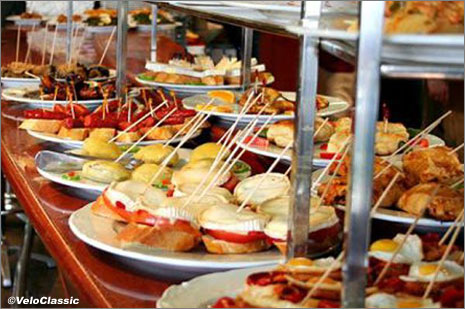 Proudly on Display
Though the center of cycling for a day, The Clбsica San Sebastiбn is just one of many days of celebration in the city, so the locals can be forgiven if they were not up and out early to see the riders arrive and send them off. Unlike the Tamborrada, which is Saint Sebastiбn Day on January 20, there is no beating of drums, no parading with human size spoons, and no 24 hour celebration period. But National, and regional, pride is paramount at every Classic, and at the Clбsica San Sebastiбn its two fold. 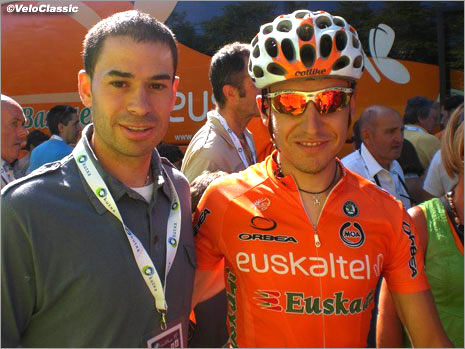 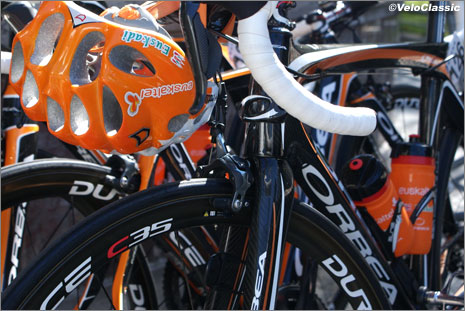 The demand for photos, greetings and handshakes was seemingly non-stop for the Spanish riders, and there was a feeling of mutual respect among riders and the fans. Spanish national champion Ivбn Gutiйrrez nearly missed his podium presentation honoring requests for his attention. 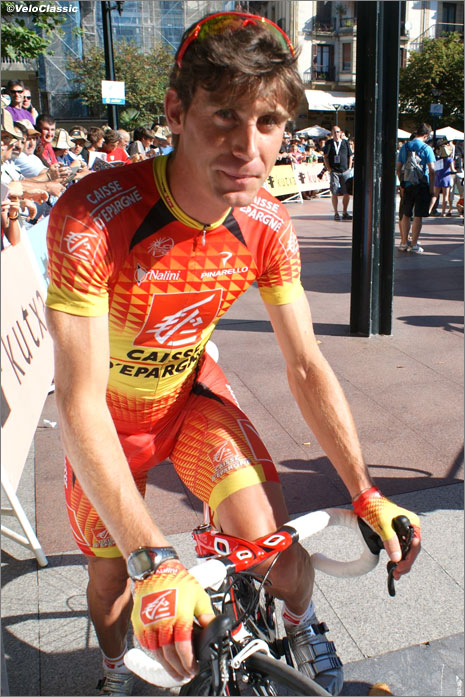 Representing the pride of the Basques was Miguel Indurain, who was merely an appetizer for the attention and applause that greeted the regionally sponsored Euskaltel Euskadi team and their adopted captain, Sammy Sanchez. The hope and anticipation of a Euskaltel/Sanchez victory electrified the crowd and provided the perfect send off for the race. 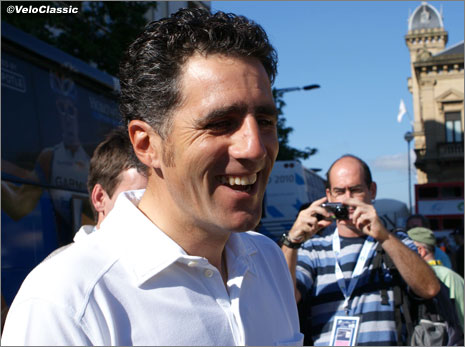 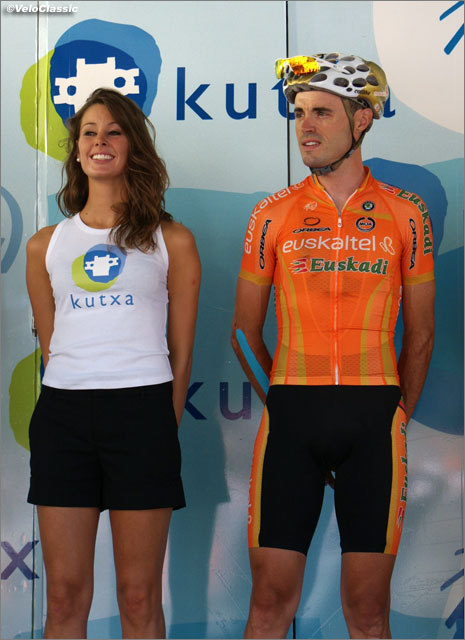 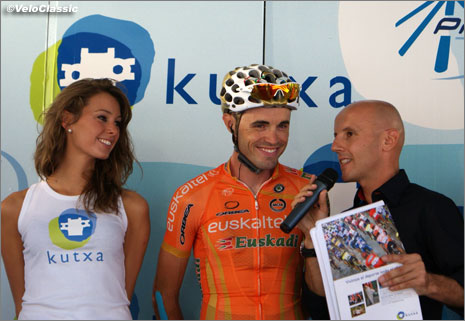 For every Classic, there is race drama, and there is visual drama. This is usually reserved for the race’s iconic spot, and for the Clбsica, both would be paired so perfectly on the Alto de Jaizkibel. And while other European cities offer a dramatic backdrop for race day- Milan and its Cathedral; the medieval centers of Bruges and Antwerp- the neutral roll out along San Sebastian’s Concha la Playa provided the purest visual spectacle that is possibly unmatched anywhere else in cycling. 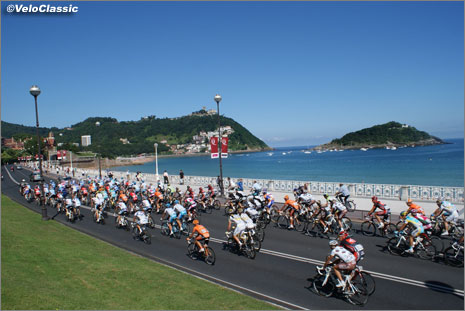 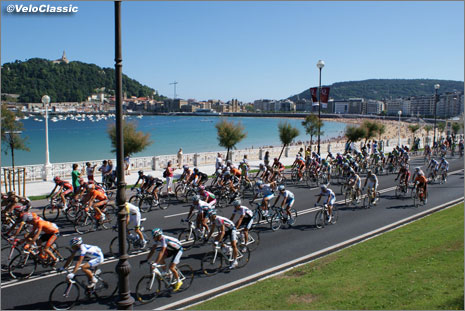 The race has a fairly simple plan: ride west along the coast. Then climb, descend, repeat, move inland through the valleys before returning to the coast and repeating the exercise of climbing and descending. Simple, maybe, but no less a challenging objective. 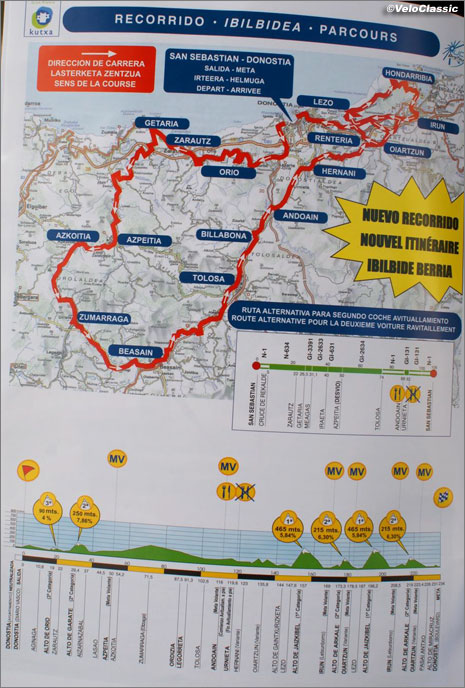 Simplicity Perfected
Far inland from the coast, the Basque hills display a rural life that seems unchanged for centuries. Cycling on most roads one can encounter sheep or cow, the silence of the hillsides interrupted only by the ringing of their bells as they graze lazily. Local cheese farms dot the hillsides, and food is steeped in tradition. Far from the glamour of the elegant city streets of San Sebastiбn, the restaurant Asador Etxebarri sits in the small village of Axpe, a startling example of rural Basque life, and an exemplary expression of culinary excellence. 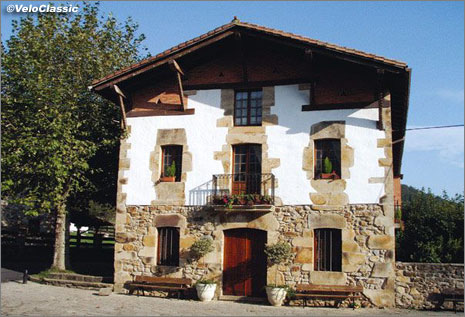 For the riders, the culmination of the perfect Basque day will end on the top step of the podium, overlooking San Sebastiбn’s Casco Viejo, proudly wearing a classic Basque txapela. Good legs will bring that success- for me, my perfect Basque day will end sampling the creations of Extebarri’s talented Chef Victor Arguinzoniz. Regardless of the endeavor, the taste of success is always fueled by an appetite for indulgence. 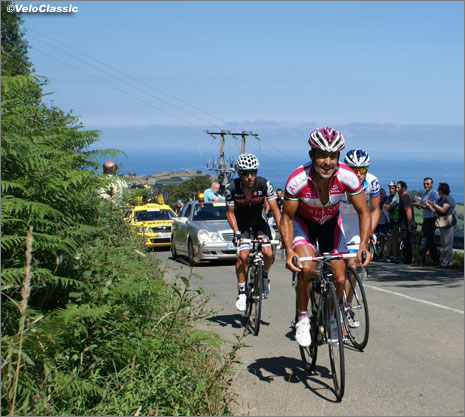 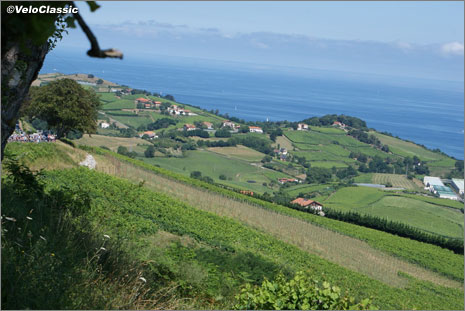 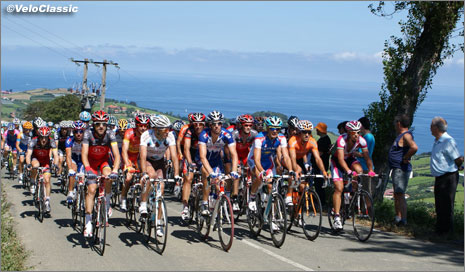 Center Stage
As the race returned towards the coast, it navigated the western edge of the Alto de Jaizkibel where it meets the port of Lezo, a visually abusive arrival after tracing the undulating roads through the remotest villages of Gipuzcoa. But a right turn to start the ascent and there is typically no sign of life until the village of Hondarribia 15 kilometers away, an ancient border town that stares at France and the mountain of La Rhune. For race day, however, the scene is significantly different, and resembles a mini Pyrenees stage of the Tour. As I ascended, the crowd swelled, and cyclists testing themselves increased. 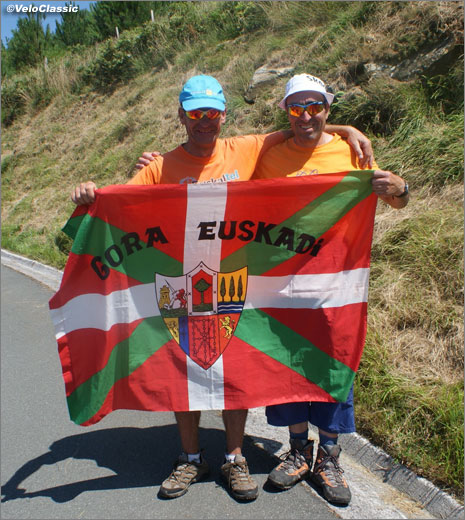 But today, the relaxed Basque way of life was infectious, and a nice quiet hillside spot overlooking the bay was mandatory, an opportunity to reflect on a magical week of riding and eating. The addition of a second ascent up the Alto de Jaizkibel was added this year to create a more challenging race, and this did not disappoint. For race viewing drama, there is hardly a more visually stunning and dramatically scenic spot for the race winning move to occur. And if you’re the strongest, you take charge here, as Luis Leуn Sanchez did. 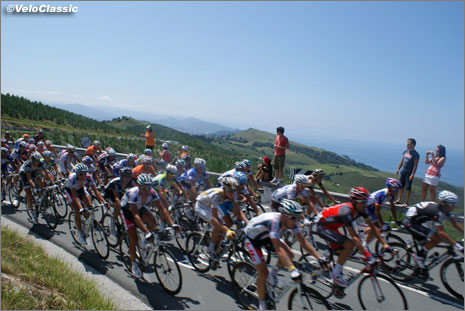 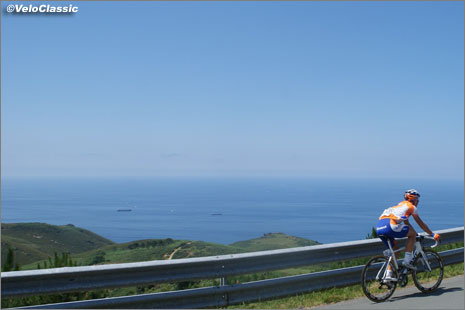 The elegant Belle Epoque atmosphere of San Sebastiбn had slowly come alive when I returned to the Alameda de Boulevard, with spectators and the casual onlooker searching for open seats at a cafй, a spot of relief from the afternoon sun, and a position along the final 500 meters for the 3-up sprint finish. The Avenue Zurriola, as it crosses the Urumea River offers a glimpse of the bay is perhaps the prettiest, finish in cycling. The late 18th/ early 19th century architecture that surrounds the old center and lines the final kilometer exudes class and style and demands the same from the winner. The victor, in an impressive display of strength built on Tour form and determination cast on the Jaizkibel, would not disappoint. 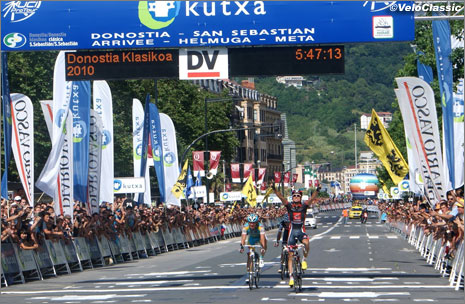 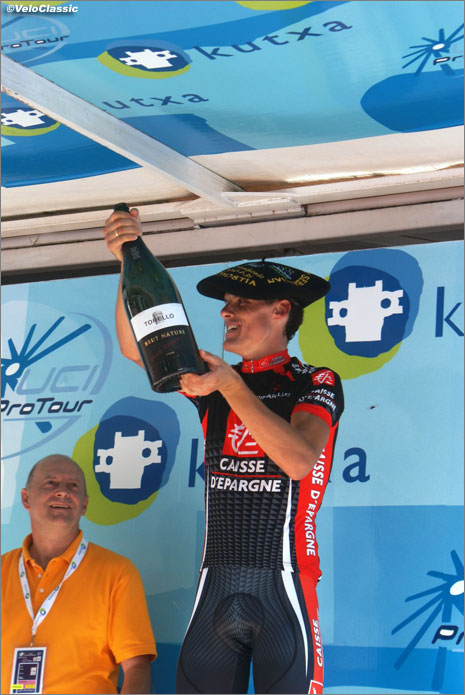 Podium Perfection
Luis Leуn Sanchez closed his eyes, pumped his fists, and then let out an enormous exhale as he stepped onto the podium and received his trophy and humbly accepted the placing of the customary txapela on his head. The strain of his efforts had disappeared, his smile flanked by two different pairs of podium companions. Much like the race atmosphere itself, there was a relaxed energy on the podium, the finishers putting aside their final hour rivalry as they celebrated with the customary spraying of champagne. For Sanchez, the celebration surely continued long into the night, perhaps, like mine, somewhere deep in the Basque hills in a tiny asador, his txapela still sitting proudly on his head, a true sign that, for today, life in the Basque Country was perfect. 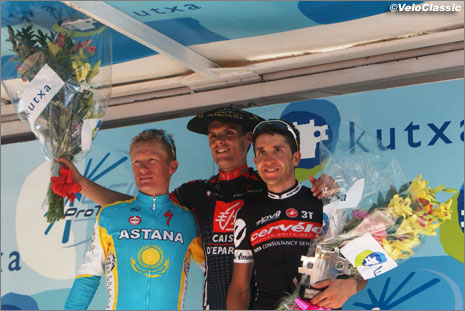 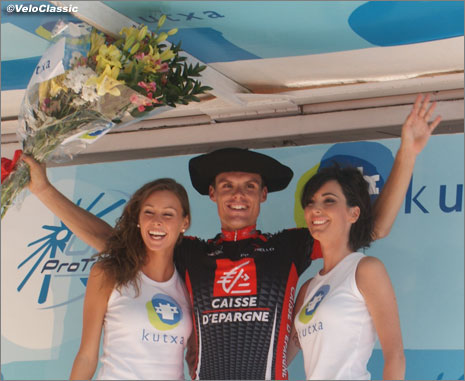 Peter Easton is not only a man of the Spring Classics, but of the latter half of the year one day specials as well. Catch up with him on the road with Velo Classic Tours and one of his eleven itineraries to the Classics. Visit VeloClassic.com for more information.
Like PEZ? Why not subscribe to our weekly newsletter to receive updates and reminders on what's cool in road cycling?