The Riviera: the mimosas smell at this time. A small boat lays on the beach just in front of the blue Ligurian sea. The fishermen just arrived and are now preparing their fish for the market. The climb if La Mani at Noli, was added in 2008 to shake up the race before the ‘tre capi’… but has it made a difference? PEZ takes a closer look…

The chaotic city of Genoa is not far from here but you feel thousand miles out of the modernity. Noli’s life, out of the summer season, is quiet and slow. The winter is quiet and warm; just few days of strong south wind can upset this small bay. 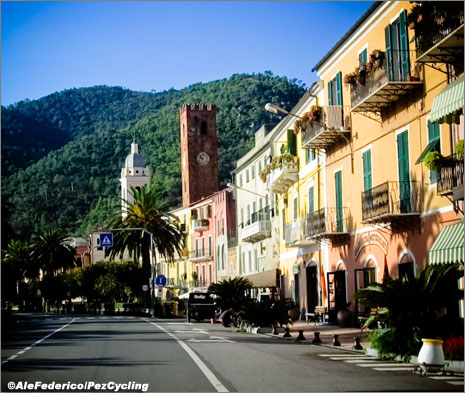 Coming into the town of Noli. Quiet winter day; the palms are suggesting new summer tales. No tourists today, but a lonely place for fishermen.

It happens; ten warm and quiet days and a couple of heavy waves on the beach. The sea advances to the road sometimes, but then it turns again. The cold north winds are blocked by the mountains sitting just few hundred meters from the seaside. 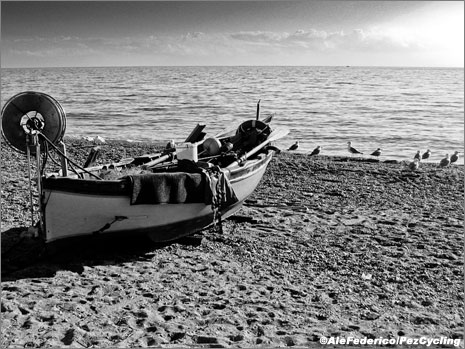 Just landed from the sea. Gulls are waiting for their part. 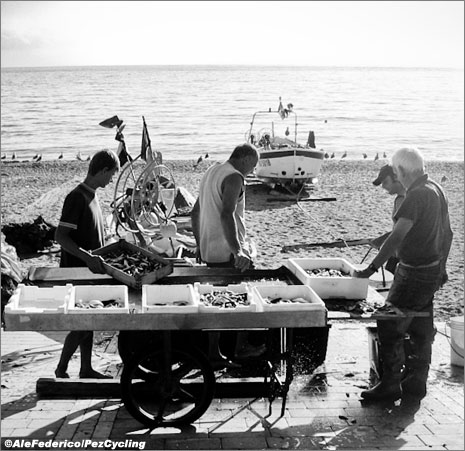 Today’s market. Not a wide choice but fresh for sure.

Since a couple of years ago the race was passing along the main road so fast that was hard to recognize somebody. Now the race turns hard right through an ancient arc and finds its way towards the new Mаnie climb. 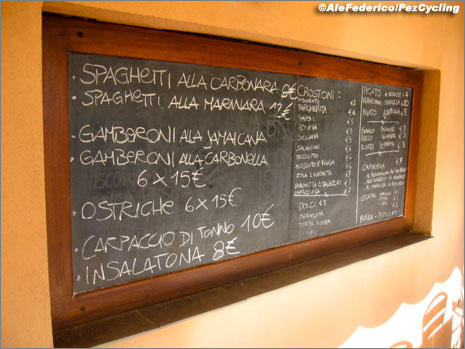 Everything prepared for lunch time. Do you prefer spaghetti or carpaccio?

The critics are not yet sure if this climb has really changed or not the race – it’s hard to change a 300 km race with a small climb – but for sure it’s added an interesting theme into the challenge in place between sprinters and finisseurs. Is it enough to make heavier the sprinters’ legs? If we look at the 2008 edition, we probably reply that, yes, this climb was creating some panic inside the bunch which was split in several small groups in Finale Ligure. But if we look at last year we discover that nothing really changed. 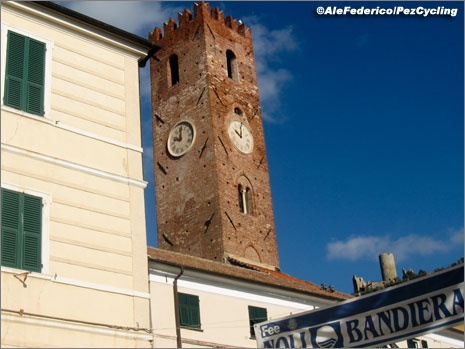 Noli and its tower from below.

There’s only one way to find out something more. To go there and see it. It’s a winter work day and there’s nobody on the road. The sun is high and the sky free of any cloud. The perfect day. 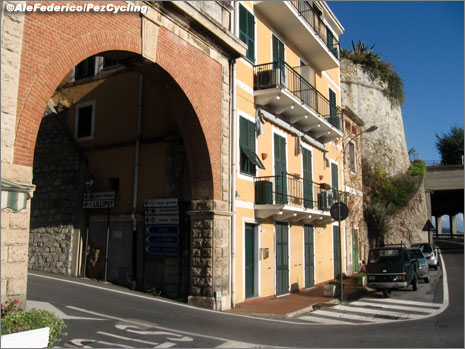 The arch introducing the climb. 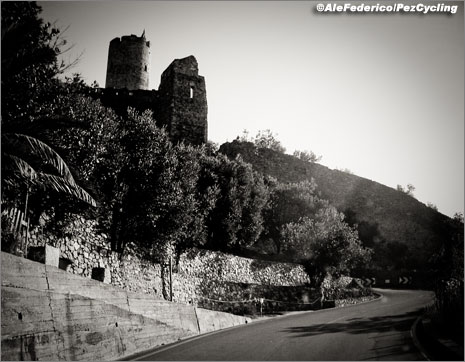 The first part of the climb is the steepest.

It’s almost lunch time and the few restaurants on the main road are preparing the tables. Seafood and spaghetti. The light smell comes out of the windows. Onion, carrot and celery: the base of any Italian dish. 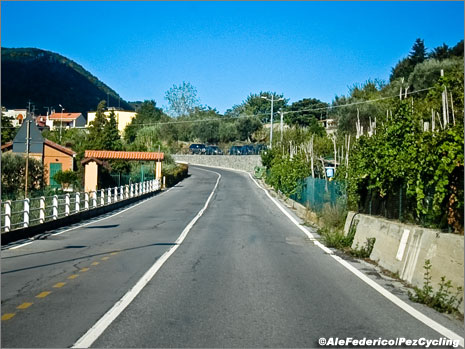 The climb after the first kilometre becomes regular, and the road is large.

The arch introduces to the climb which starts immediately in the old town. Couple of turns and you’re out of the ancient walls. Noli is already down below with its towers. The slope is 8%, constant. The road is large and, on the left, the view opens to the valley, closed by the town of Voze, the top of the Mаnie climb. 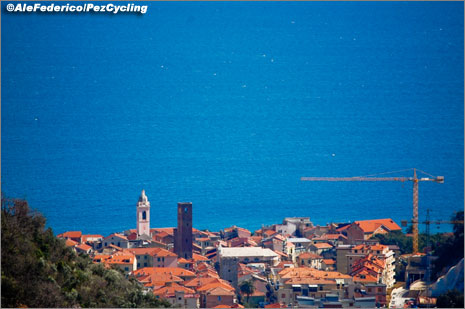 Noli and its tower from above.

The church, it’s already a symbol. The last part of the climb is the most hard. On the top there’s a couple of kilometre flat. Country roads; a couple of “taverna”, and start the descent. 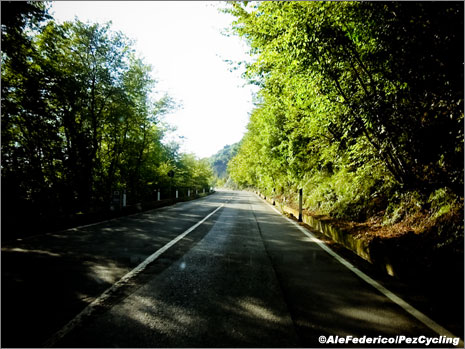 On the top a couple of flat kilometres. 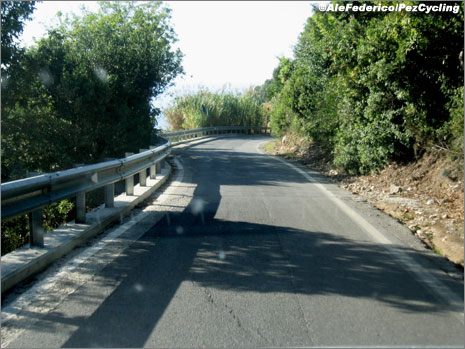 Suddenly the road is narrow; the toboggan run begins. Around, only olive trees and water.

After few switchbacks I realize. It’s not the climb giving the difference, but the descent! It’s not dangerous, cannot be compared to the Cipressa; but it’s narrow, it’s long, and requires acceleration at any turns. And I counted many. It gives no rest and, coming after the climb can really give trouble. 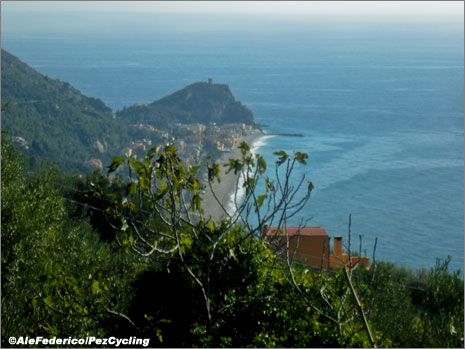 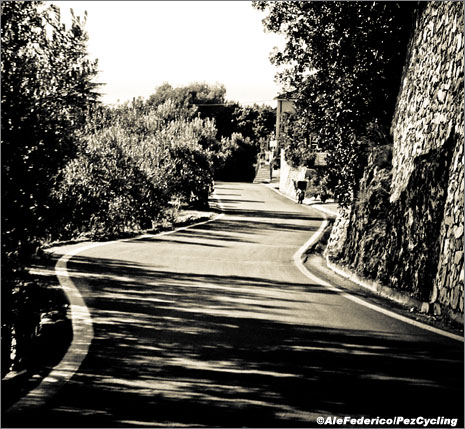 Keep in mind that this part of the race was traditionally used by the teams to organize the final hours. This road now changes the rules and gives the opportunity to the brave to organize something different. As usual the tool is in the riders’ hands and must be used in the right way. It would be probably too optimistic to try an attack on the climb, but it’s possible to “mix the waters” and make heavier the sprinter legs riding a good tempo there and attacking hard along the descent. 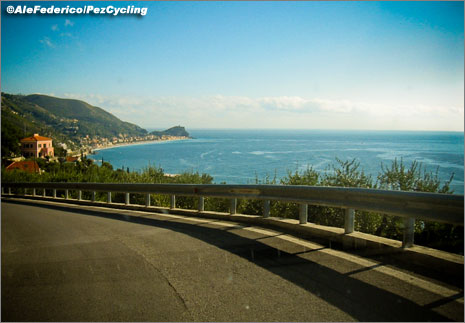 Couldn’t change anything. But it’s anyway something to try. As always fantasy and courage is the good mix required by anybody who wants win this race. Who talks about Sanremo as a sprinter’s race hasn’t really understood the deep soul of this race. It’s easy to change idea. 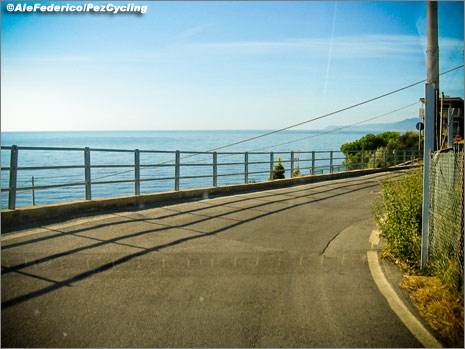 A switchback looking west: Sanremo is somewhere in the distance.

Have a tour here, through the olive trees. Have this view of the blue. Do you see, on your right, well ahead that coast? It’s the road to Sanremo. You can have it. But you must want it. Is there somebody in the bunch really interested?