This is a tale of two differing fortunes – one of victory, one of second place. It’s often like that in bike racing, but it’s rarely so vivid in its harshness. Haussler made the perfect move in the final moments of the 2009 edition of Milano-Sanremo. He left nothing to chance, put in the perfect sprint, and he had it. He had it all the way until he reached the line, where Mark Cavendish gobbled up the win, spat out Haussler’s remains, and continued on to one of the most successful sprinting seasons we’ve ever seen.

The 2009 Milano-Sanremo was a less than thrilling bike race for the first 299 or so kilometers. It wasn’t one of those years where the attackers ever got much of a leash. Pippo’s move on the Poggio never had a chance, hell, it barely got six inches off the front of the field. So it was going to be a bunch sprint. Ok, cool. I can handle that. I like bunch sprints. It certainly wasn’t going to be a banner year though. While galloping sprinters is an entertaining sight, it’s rarely a finish for the ages. 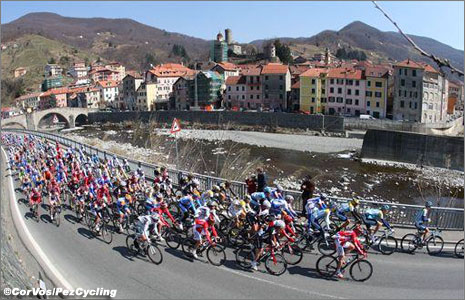 This year’s MSR was good for pretty peloton pictures, but that’s about it…that is, until the streets of Sanremo.

Something peculiar happened at around the six hour forty seven minute mark though: this race became one for the ages. As George Hincapie began to lose a bit of steam in the last 500 meters, Cervelo’s Heinrich Haussler came up on his left with a full head of steam. He went by him at an incredible speed. Haussler later said that he thought he was leading out his proven sprinter teammate, Hushovd, but Hushovd was nowhere near Haussler’s wheel. This was Haussler’s move. He got a huge gap instantly, a gap virtually unheard of in a sprint like this.

In ANY other year, the win would have been Haussler’s. Normally a couple of bike lengths in the final few hundred meters is plenty, especially when you’re dealing with a solid sprinter of Haussler’s caliber, arguably one of the top 10 quickest in the world. The only problem for Haussler was that he was dealing with the fastest man on the planet bar none. He was dealing with perhaps the fastest sprinter we’ve ever seen: Mark Cavendish. 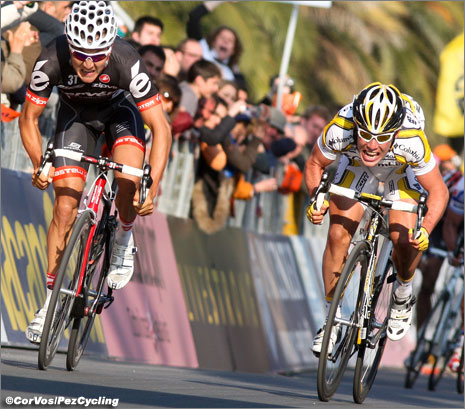 Haussler with a huge headstart versus Cavendish produced a thrilling sprint finish.

Cavendish got a second or so late start on Haussler, but he wasted no time in devouring the missing meters. The overhead video on this sprint is stupefying. People often compare a really fast bike racer to someone on a motorbike. I think that’s a fair comparison from time to time. Cavendish put that to shame though. It looked like he was piloting an MotoGP bike. He went across the vacant space with such speed it was cause to rub my eyes and make sure the video wasn’t being sped up.

The duel between Haussler and Cavendish for the win was one thing, but when you put it into the context of Cavendish starting dead even with the world’s best sprinters – he put acreage into them in the final 200 meters. Miles, kilometers, light years – he left them gasping, groaning, lunging, but they could do absolutely nothing in his wake.

Haussler, though, had a real chance at victory. He got the huge head start that anyone needed to beat Cavendish on that day. He pushed, pulled, yanked, did everything he could to get to the line before the rocketship could chase him down. He saw him coming, he moved left, right, left, then finally back to the right doing anything he could to keep Cavendish out of his draft, and he very nearly pulled off the miracle move. 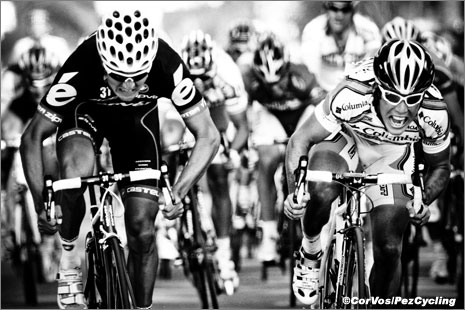 A headstart was about the only way anyone had a chance against Cav in 2009.

Haussler looked like an injured antelope chased by a lion. His face a mixture of anguish and fear, his posture higher, stiffer. Cav was the crouched lion with nothing but raw power to be seen his face, barely keeping his chin off of his stem, a bullet locked on to its prey. Haussler was close though, agonizingly so. It looked like he lost a year of his life for each of those last five pedal strokes. The demarcation for legend dangled tantalizingly close to his desperate lips. 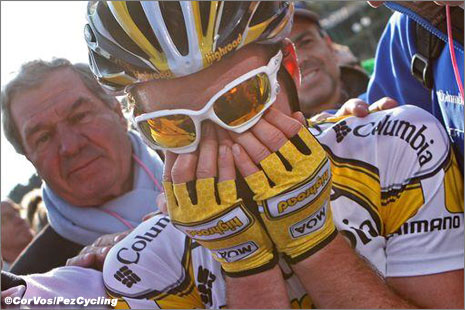 It didn’t take long for the tears to flow.

But the line didn’t come soon enough – the two young stallions lunged for the line, but it was Cavendish, the legendary Zabel’s pupil, who got to the white boundary of glory first. 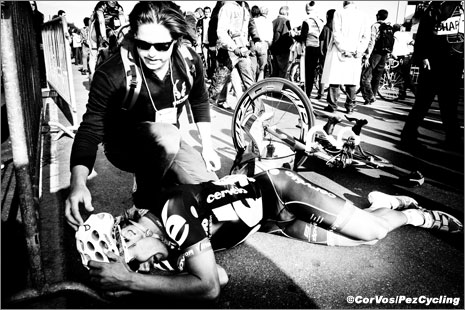 Correspondingly, it didn’t take long for Haussler to collapse to the pavement.

After that, the two, almost identical in their finish line poses, parted ways. Haussler knew he had lost, Cavendish knew he had won. Haussler pulled over and collapsed to the ground in utter anguish at having lost his biggest win in the final centimeters. Cavendish soared into the waiting mob, hugged everyone in sight, and began the rite of passage for all Sanremo winners: the tears started flowing. The two shared tears in their separate ends of the ring. 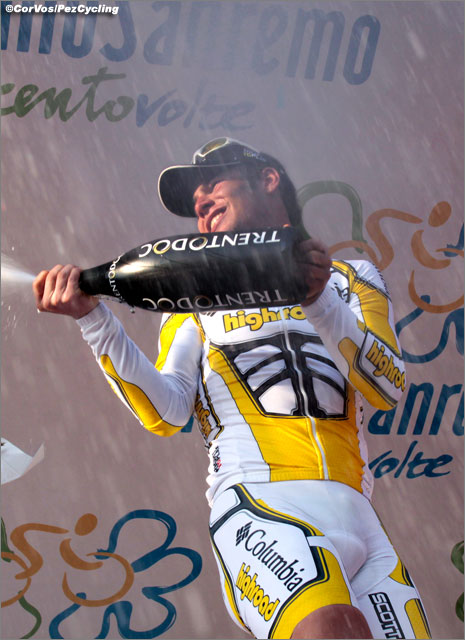 I have never seen a sprint like that. I don’t imagine there have been or will be too many sprints like that.

The two protagonists of that thrilling final kilometer journeyed down very different paths for the rest of the season, and both proved very fruitful. 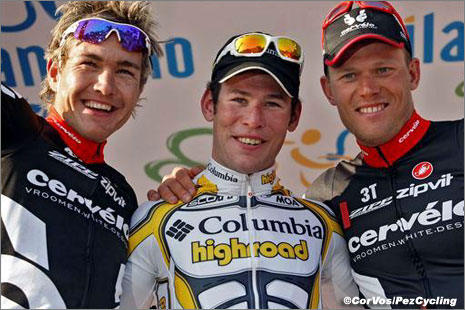 Haussler recovered his composure to enjoy his time on the podium.

Haussler continued his surprising spring with a third place at the Tour of Flanders not long afterward, then followed that with a 7th at Paris-Roubaix. That result went nicely with the rest of his Spring Classics season: he almost took the win at Het Nieuwsblad, but was caught in the waning meters and finished in 8th place.

Haussler’s season was arguably the revelation of 2009. He was without a doubt the most improved rider of the year. Haussler was by no means an unknown before ’09, but he was one of the many young guns touted for greatness that really just hadn’t measured up to the lofty expectations placed on his Australian/German shoulders. Then he did. The Spring saw him assume a spot as one of the world’s best in the Classics, and the rest of the season saw him assert himself as one of the best all-arounders in the game. 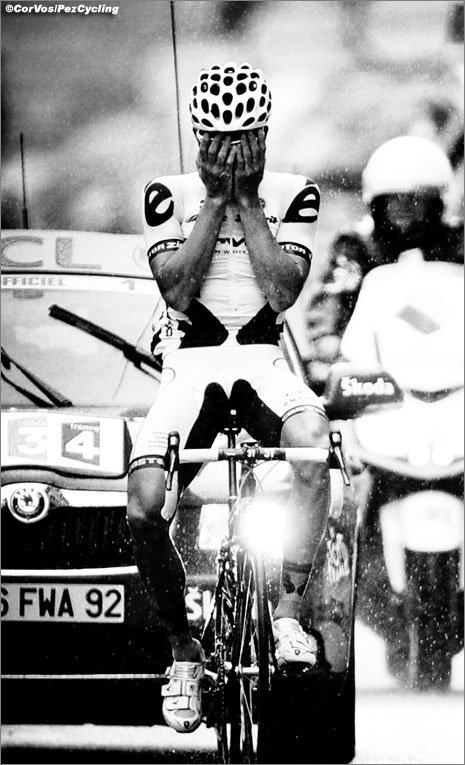 While Cav ran away with six stages in July, Haussler’s solo victory was stirring.

He took six very different wins throughout the 2009 season along with gobs of top placings. He was a changed rider in 2009. I have to wonder what we’ll see of Haussler in 2010. 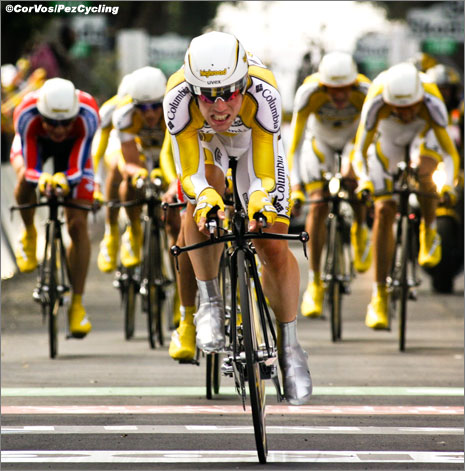 Cavendish spent most of 2009 surprising us. He stunned everyone with his victory at MSR, then showed his newfound power was no joke as he led the Columbia boys home to TTT victory at the Giro.

Mark Cavendish, for his part, set about making sure the whole world knew that he was the best goddamn sprinter on the planet. Sure, he said it a fair bit, but he made it very, very clear with his legs. 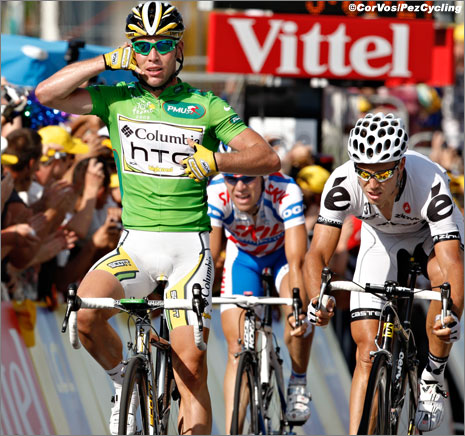 Cav calling HTC – thanks for the sponsorship!

The 24-year-old Cavendish knocked out an astounding 24 wins in 2009. That isn’t terribly unheard of, but considering that over a third of those came in Grand Tours (six at Le Tour and three at the Giro) and one of them was Milano-Sanremo, the quality was second to none in 09. 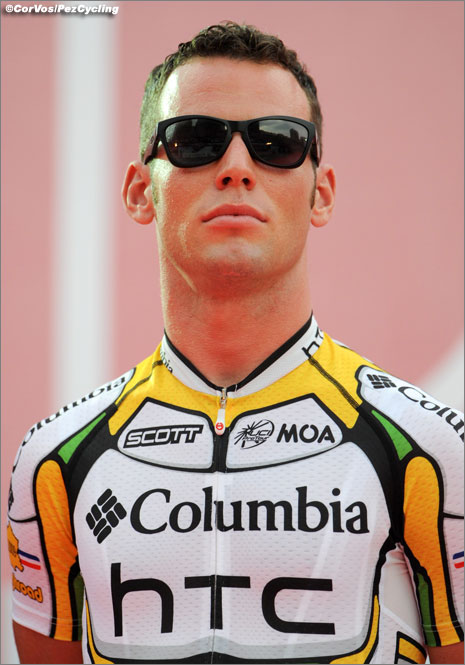 I think it’s pretty clear that Cav is at least part ass hole. It’s just a question of how big is that part. 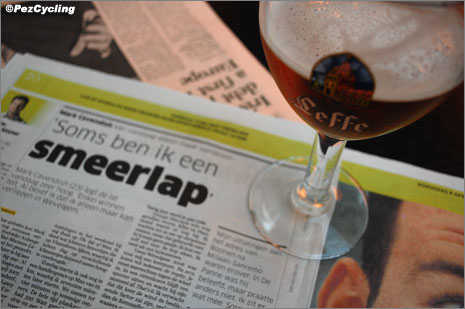 The Flemish word for something akin to a sonofabitch / ass hole is smeerlap. Right before Gent-Wevelgem this year, Cavendish admitted that he’s sometimes an ass hole. Haha.

On and on the list of his wins goes. It started in January in Qatar, moved to North America for two stages and the sprint jersey at the Tour of California in February. March yielded a stage at Tirreno-Adriatico along with Milano-Sanremo. April continued the festivities with a couple of stages at De Panne, then came May with three stages and a stint in Pink at the Giro. June was pretty quiet with only two stages at the Tour de Suisse, but July was all Cavendish: SIX stages at the Tour de France, then came the end of the season triumphs at Missouri, the Sparkassen Giro, and a stage in Ireland. 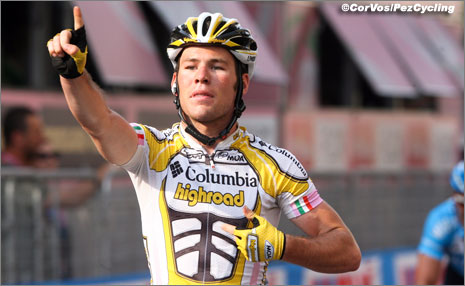 Three stages at the Giro? Not too shabby.

Cavendish is always good for a quote. Cavendish claims to only answer the questions posed to him: “When journalists at the Tour de France ask me if I am the best sprinter, I answer ‘Yes’, and that’s seen as arrogance, but if they don’t ask me, I don’t say I’m the best sprinter in the world.” 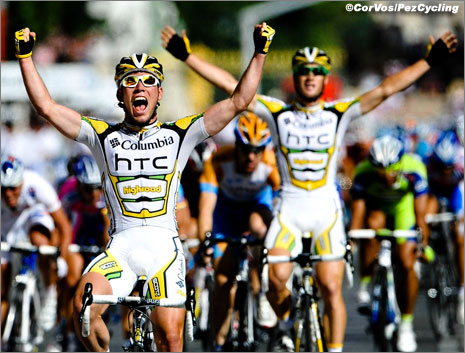 Six stages at the Tour? That’s more like it. The win on the Champs d’Elysees was right up there with his win in Sanremo in terms of utter domination over everyone else.

You have to ask yourself if you wouldn’t be so damn cocky if you were that good. It would be hard not to be. I for one wish I could be that cocky.

And just for entertainment value, one more quote directed at Filippo Pozzato. He calls him his: “least favourite rider in the peloton [with] his over-moisturized smug mug.” Pippo countered at one point calling him ‘amateur.’ Cavendish seems to have gotten the final word though in his BOOK with this gem: “One day I’ll maybe tell Pozzato what his problem is: I think he fancies me.”

I’m a budding fan of Mark Cavendish. I couldn’t stand him for the longest time, but I am beginning to warm to his, er, style. Some say he’s a dick, but at least he calls things how he sees them, and, for the most part, that’s a rarity in our world of carefully measured words. They’re sportsmen. The riders are there for a show. Why not take the show off the bike and produce some theatrics on the sidelines?

I’ll be the first journo in line waiting to jot down the next gem.

For more fun, give me a shout on Twitter.

Seeking San Remo Pt.2: The Duel To Via Roma