“Frio!” shouts Matxin, the Saunier DS – that’s “cold!” in English and “snel!” in Fife, Scotland. We’re off: it’s 09.35 and it’s not just “frio” it’s very misty too, but they’re only going six hours today. The traffic in Granada isn’t too bad, but I wish assistant DS, Sabino, would look at the road instead of at Matxin in the passenger seat; Matxin could talk for Spain and Sabino isn’t far behind him…

We have to communicate in a mixture of French and English; “Montagne aujourd’hui?” I enquire – “ah, oui!” 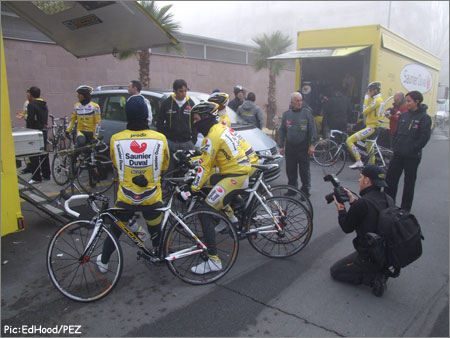 Getting ready for a long day at the office.

Half Hour In
It’s 10.00, we’ve caught up with the boys and the sun is out; my Scottish eyes aren’t used to it and I’ve left my shades in the room, damn! We’re going on ahead of the group, Sabino gets us lost, Matxin isn’t happy – he stops talking, but not for long. We’re blasting along those long, straight, rolling roads you’ll know so well if you watch the Vuelta on TV. 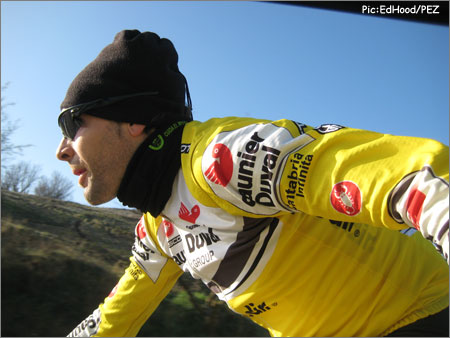 Iker Camaсo comes alongside at 10.35 and there’s a debate about the route, he can talk almost as fast as Matxin. Ahead, the snow capped peaks of the Sierra Nevada rear into the clouds. 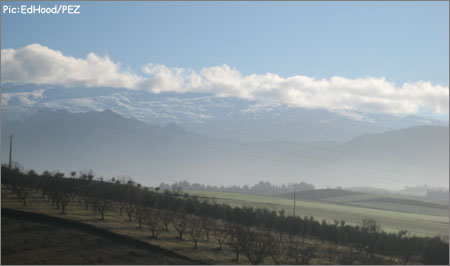 1.5 Hours In: The Climbing Begins
It’s 10.55 and we’re climbing a wide, well-surfaced road, but there are shoulders rocking back there and hats are being shed; they’re still chatting though. Gears are low and revs high as we head ever upwards. 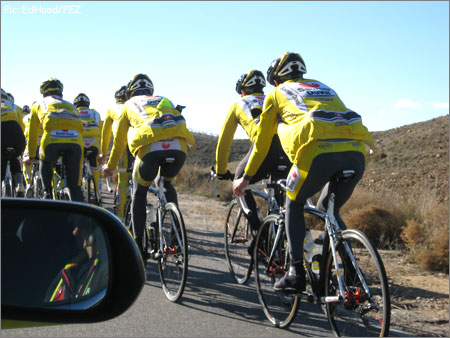 It was fun till we started climbing…

The SatNav screen displays just a single line as we chug towards the skyline, past skeletal olive trees. Juggernauts whine past, but there’s no drama or horn blasts – maybe the truckers are Ricco fans? 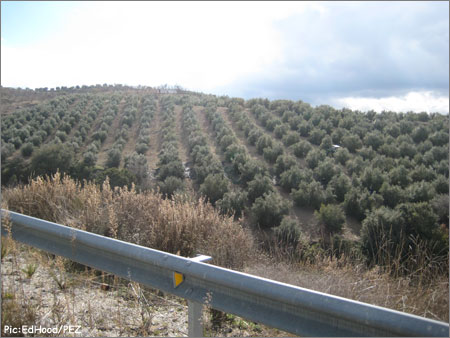 Neo pro, Hector Gonzalez decides to head back, just on the two hours, one of the Saunier amateur squad decides to join him; up ahead the revs are higher and there’s no chat, Spain sure is hilly. 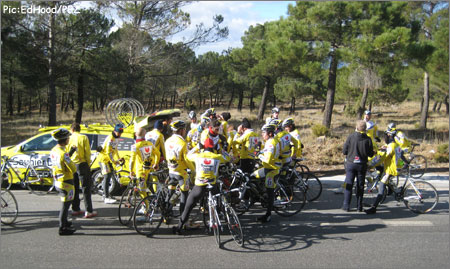 2 Hours And Some Change: Time For A Coke
“Coca Cola por favor!” Shouts Riccardo Ricco, with his diamond-studded ear ring sparkling in the bright sunshine, as we have a pit stop, high in the quiet hills at 11.37. As usual, it’s Leonardo Piepoli making the most noise, demanding energy bars, waving his skinny arms and ribbing everyone, they’re all used to him by now and just laugh. We don’t stop for long though, we’re soon back on the grey tarmac rolling through the scrub and pines; a couple of stragglers get motor-paced back to the group. 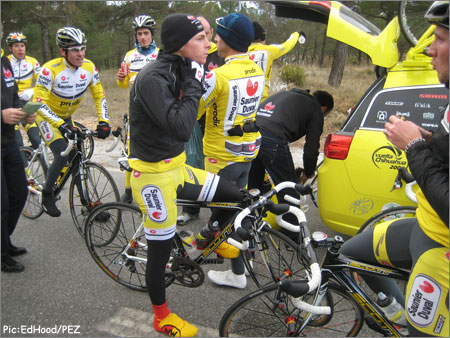 Ricco dons the proper descending attire and coasts most of his whole team off his wheel save for Piepoli and a few others.

2.5 Hours: Get Warm
We soon stop again though, 11.55 and there’s a long, long descent coming up; Matxin wants the boys to be warm: hats, capes and gloves go back on. As it should be, it’s the top men who are ready first; Piepoli and Ricco lead the plunge. There are switchbacks though and the rises are sticky, there are three groups on the road now, as Matxin decides to pace the second group up to the front group, where Piepoli and Ricco are in charge. You can’t just say that you are a ‘capo’ – you have to demonstrate it. But the descent is tricky and there’s no heroics, no one wants to end their season before it even starts. 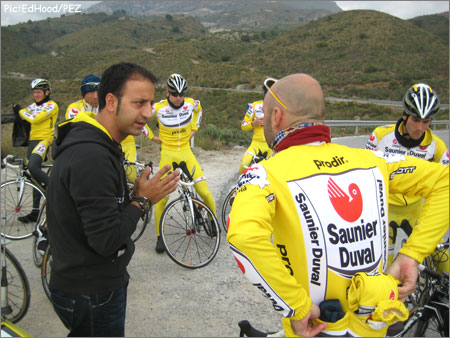 Matxin doing a good impression of pissed at Piepoli.

Matxin ain’t happy, it’s 12.20 and Piepoli and Ricco have dropped everyone on the descent. “Halto!” and there are ‘words’, the jist of which would seem to be that; “we’re on a team ride, not a death ride!” Leonardo appears to be saying; “it’s not our fault that they can’t descend, boss!” 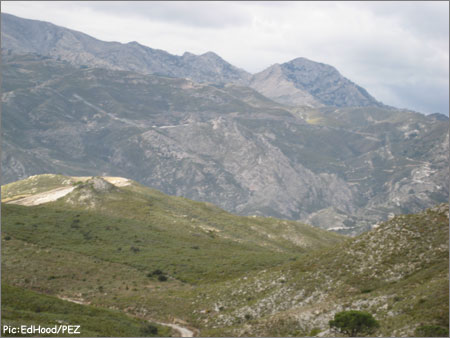 3 Hours: We’ve Got An Off-Road Explorer
Off we go, back up the hill we just descended, the tempo is steady, but not killing; 12.38 and Manuele Mori takes a trip into the gorse bushes, going uphill! But we get him up and away again with just his pride hurt. 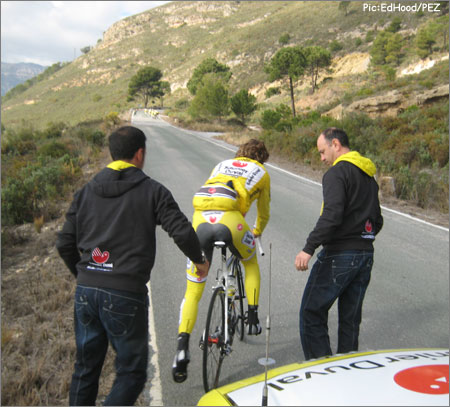 Manuele Mori tried a taste of gorse for a moment…yum.

Eight have survived the climb and the watch says 12.50 as Piepolo bounces away at the front. Pretty soon it’s six and even Ricco isn’t looking so cocky as he sits at the back; it’s Gomez Marchante doing the damage now, with Piepoli tucked in behind. But Marchante cracks, slipping-back past the car with a wry smile. Five now, as Josep Jufrй strings them out; “piano, piano” shouts Matxin as we reach the top, he wants the others to catch up. We stop the car, under a grey sky and one by one, the stragglers ride past, we continue on our way and Litu (Angel Gomez) tucks in behind us and gets an ‘easy’ ride back to the pain squad, who are taking it easy – for the moment; 13.05. 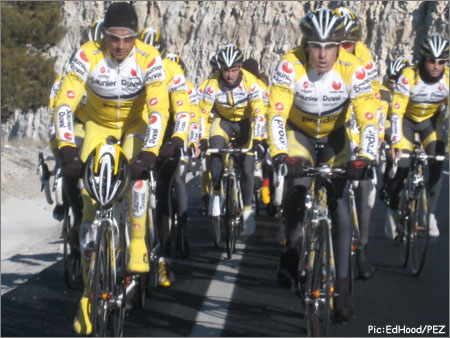 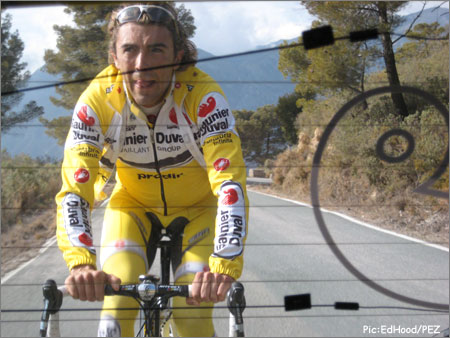 The cars prove invaluable trying to keep the extraordinary range of talent and fitness together.

More motor-pacing as we drag another four victims back up to join the group. There’s no ‘just riding home steady’ here – the work must be done. 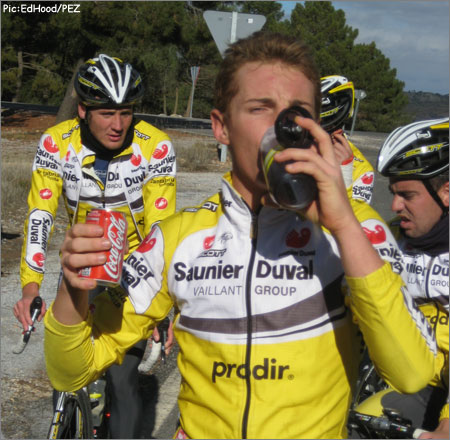 Coke: the fueling choice of champions.

4 Hours: Refueling
Second pit stop, 13.25 and it’s cold, the sun has gone into hiding; cold or not, the guys glug down tins of ice tea, whilst Ricco guzzles more Coke. The energy bars rapidly disappear from the rear of the car as capes go on to beat the chill. The mood is a bit more subdued, except for Piepoli who is as loud as ever, he seems in great shape, just under four hours of knocking lumps out of everyone doesn’t seem to have left him up nor down. 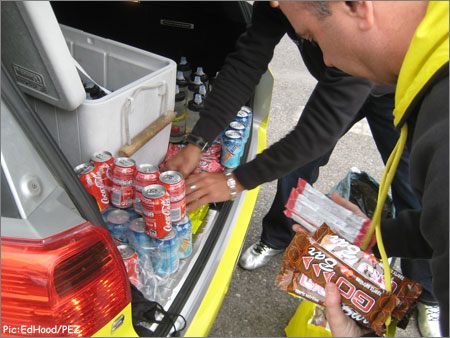 Ten minutes later, the first puncture of the day, Sabino changes the wheel and we motor pace Josй Alberto Benitez back up to the group, rolling through what seems like the home of every olive tree in the world. 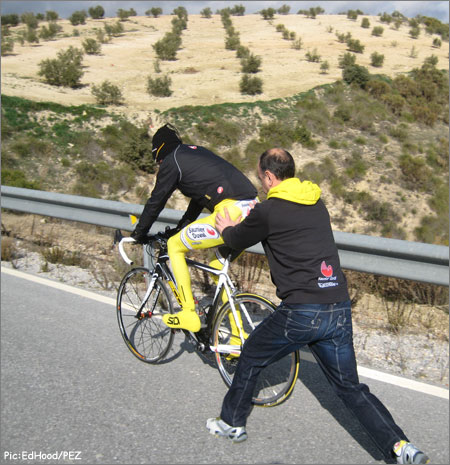 No worries, Mr. Benitez! We’ve got a new wheel, a push, and a motorpace to get you going again.

Almost 5 Hours: A Rare Village Sighting
It’s rolling at 14.05 as we battle with the speed bumps in the litttle village of Agron; despite being out four four-and-a-half hours, we’ve hardly passed through a village and seen very few vehicles.

It’s still all together as the sun struggles with fluffy clouds, peasants burnt black with the sun, tend the precious olive trees, hoping to coax a good harvest from them come the summer.

5 And Change: Turning The Screws
Matxin pulls alongside the group and Sabino signals to Piepoli to change – he’s been pumping that big gear into the wind for too long now and they want someone else to get the workout, it’s 14.40 now, nearly five hours in.

The group has split in the wind, they’re riding ‘through and off’ at racing tempo now, with Rubens Bertogliati’s face never far from the front. 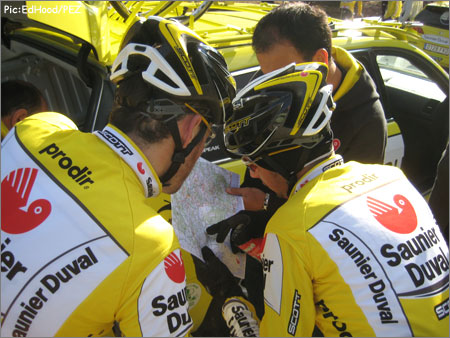 There was much map consulting by riders, management, and police on this particular ride.

Despite maps and SatNav, it seems as if we’re lost, we ‘ask a policeman’, the two groups merge due to the delay and we’re touring the industrial estates of Santa Fe as the watch says 15.00.

Once back on to proper tarmac it’s ‘through and off’ again on gently rolling grey roads past the inevitable olive groves.

Now I know how Dave Duffield feels when he starts talking about the 1874 Milan to Stockholm; flat roads, long sweeping bends and the string changing smoothly behind us, what to say? 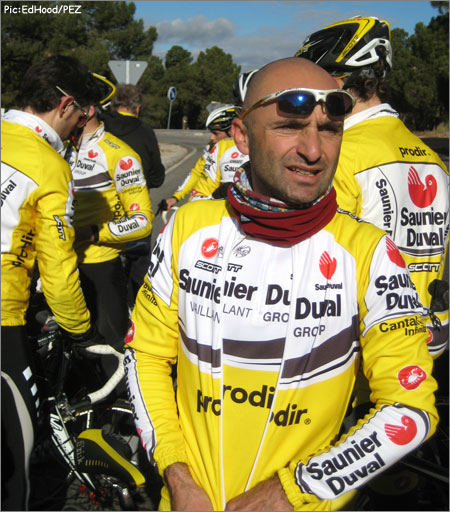 Leonardo Piepoli is not only a mini rocket ship with a neverending fuel supply, but a character and a half as well.

Six Hours Since Departure
It’s 15.25 and no sign of Granada, it’ll be six hours, alright!

Six hours clicks-up and I could use a shower and a coffee – all I’ve done is sit in the back of this car, never mind trying to cope with Piepoli. 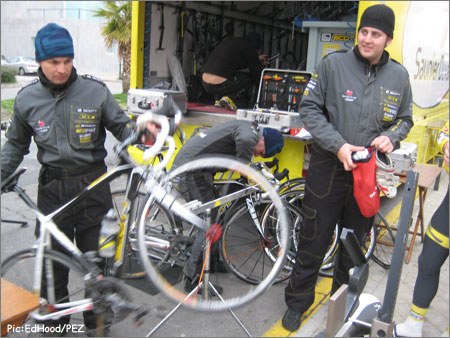 As the riders finish up, the mechanics begin.

I make it around six-and-a-quarter hours when we arrive back at the the Hotel Nazaries; just another day at the office. And has Piepoli finally been worn-out ? 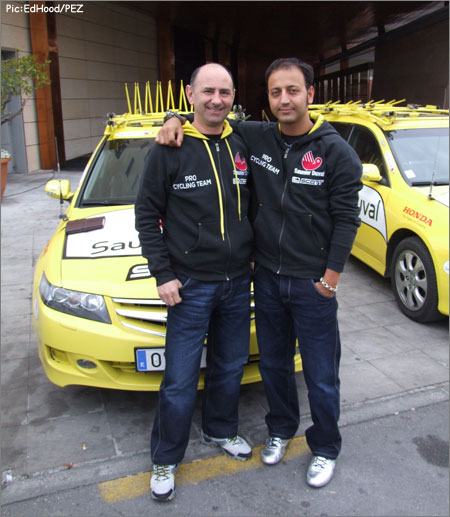 Sabino and Matxin – our entertainment for the day, thanks guys!

Pro Shop – Back to Business