The Scottish winter was a wee bit too much for our man Ed Hood, so he hopped a plane and headed directly for the sunny environs of Spain. Of course, it was no random hop. Ed is on the scene for PEZ in Granada to get us anything and everything newsworthy on the Saunier Duval training camp.

You know you’re in Spain when . . . . you see the bull; jet black, proud, dominating the skyline. There used to be around 100 of these giant beauties dotted-around Spain, there’s a lot less than that now, but the numbers shouldn’t slip much more, they were given ‘protected status’ by the Spanish Government and can’t be pulled down. Originally they carried the word ‘Veterano’ – the name of a famous and fiery brandy still made by Osbornes, but the outline become so synonymous with the product that eventually they stopped painting the name on them.

And why the English name for Spanish brandy? Back in the Napoleonic War, when the English helped the Spanish evict the ‘Little Corporal’, many of the English officer classes stayed in Spain after the war and married-into wealthy Spanish wine-making families, hence Osborne, Cockburn and Hardy. 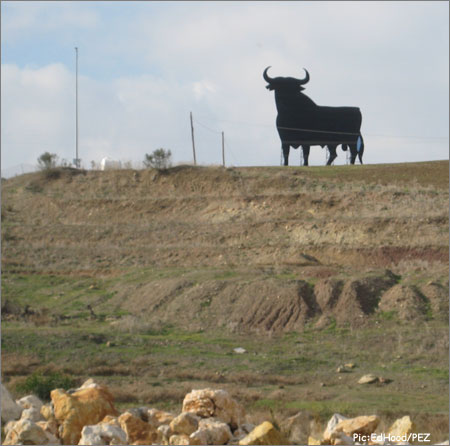 The bulls are supposed to have magical qualities too, if a childless couple make love under the bull’s mighty cojones, then the lady will conceive – so the legend goes. 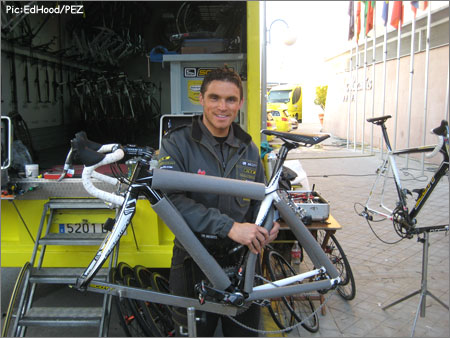 There’s a helluva lot of work to be done for the team mechanics this time of year.

Some Changes In 2008
David Millar has gone, so has ‘Gibo’ Simoni, sprinter Francisco Ventoso, and who knows what’ll become of Iban Mayo, but the team is still a strong one with the likes of climbing super-star Leonardo Piepoli and emerging Italian ‘capo’ Riccardo Ricco still advertising the central heating boiler company’s wares. 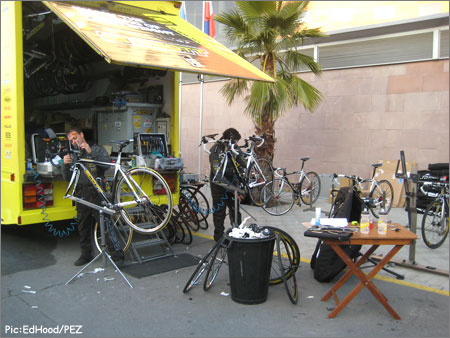 We left a wet, cold and windy Scotland behind, flew to Malaga, picked up our hired Peugeot, said ‘hello’ to the bull as we headed north and arrived here in the five star Hotel M. A. Nazaries in Granada. 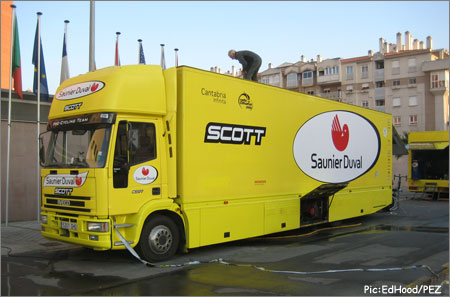 It might be possible to see this truck from space. Thankfully Ed saw it and didn’t get lost.

The hotel was easy to find, the Saunier Duval armada is hard to miss, still bright canary yellow for 2008 – but that’s what this game is all about, catching the eye, attracting interest and publicity. 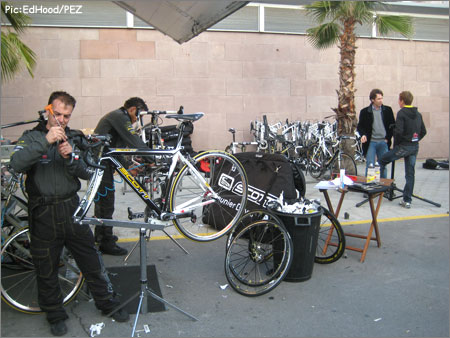 Who is that man slight of build a wee bit off in the distance?

Supastar Sighting
We had just parked the car when we spotted our first ‘star’ – Riccardo Ricco, relaxed in jeans, ‘relaxed’ was the last word you would use to describe him in the finales of Milan-San Remo and the Tour of Lombardy, both of which he animated; only a back-to-form Cunego could keep him off the top of the podium at Como. 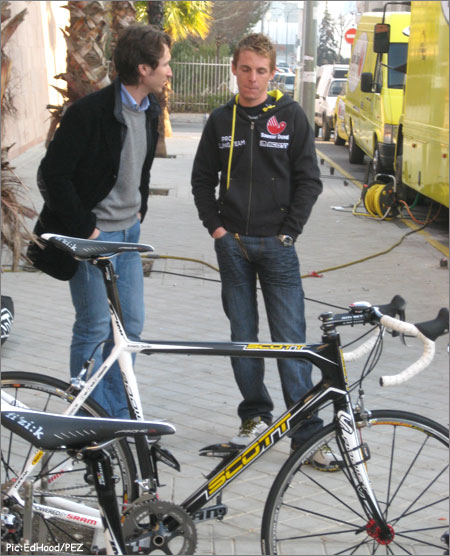 We’ll be talking to Riccardo about those finales and also his goals for 2008, before the camp finishes on Sunday. 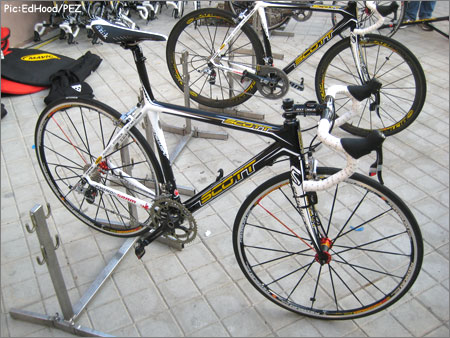 That is one fine piece of velocipedery.

The Saunier Duval Steed
The colours are the same and so are the bikes – Scotts, but this year they have a new paint job and integrated seat posts, we’ll be talking to Scott to get the low-down on the team’s handsome new steeds. 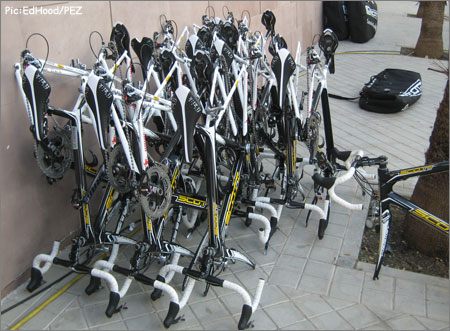 Those are many nice pieces of beautiful bikery. 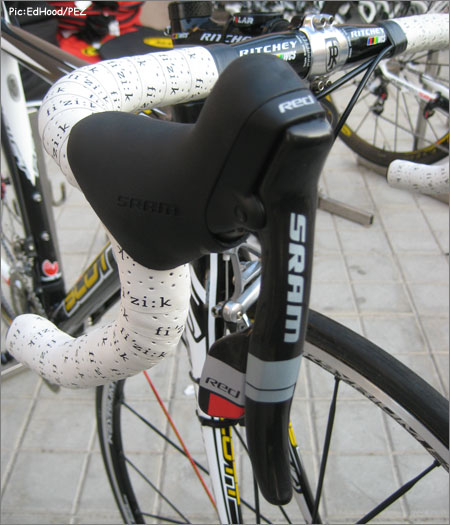 Red is the new cool kid in school. 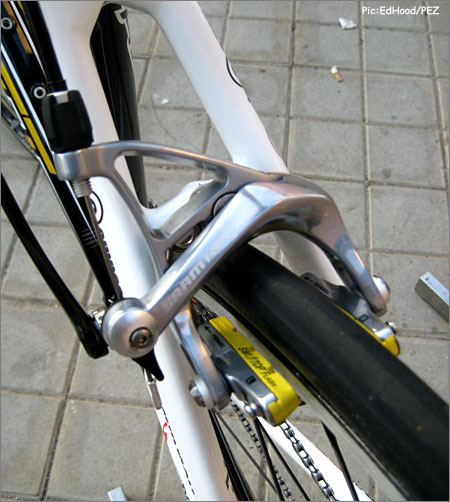 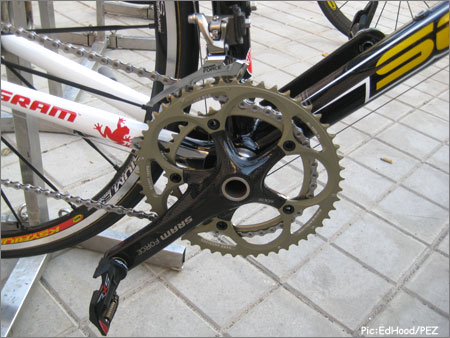 As per the norm, not all of the bikes are outfitted to a ‘T’ with the top-end gruppo. Force still plays a hearty role on the team, as do the TIME RXS pedals.

While talking equipment, the next guy to get Pezzed, was spanner man, Roberto – we rode shotgun with him in the team car last year on a four hour training run; he still carries the Pez pics we took of him back then, setting positions. 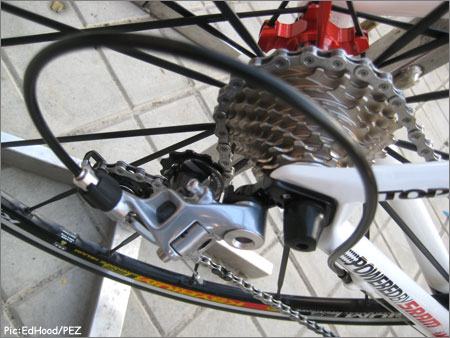 We’ll be talking to team boss Mauro Gianetti about the highs and lows of 2007 and his ambitions for 2008, what’s it like to have to let a rider like Millar go?

Time will be spent on the road too, as we follow the team into the mountains which ring this old and beautiful city. 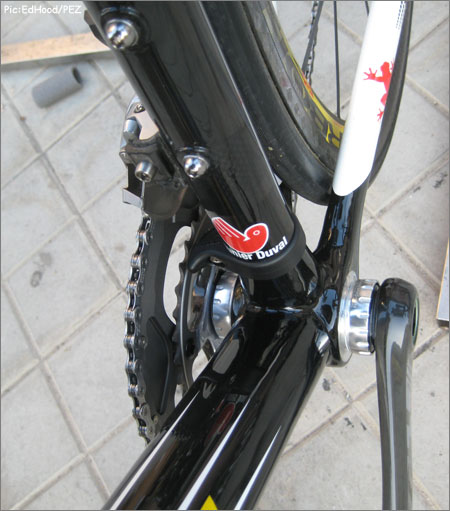 For these exclusive insights into the world at the top end of the ProTour – keep it tuned to PEZ!