With most of my interviews completed, day 3 at the Saunier Duval-Prodir training camp in Murcia was set to be a little less hectic, allowing time to observe David Millar get poked, prodded, and tested, and a chance to drool on the new Scott Plasma TT bike.

Got Plasma?
After a typical continental medley of pastries and cafй I had a rendezvous with Adrian Montgomery from Scott bikes to take a look over the new Plasma TT bike that David Millar will be aiming to ride to prologue victory in his comeback Tour de France. 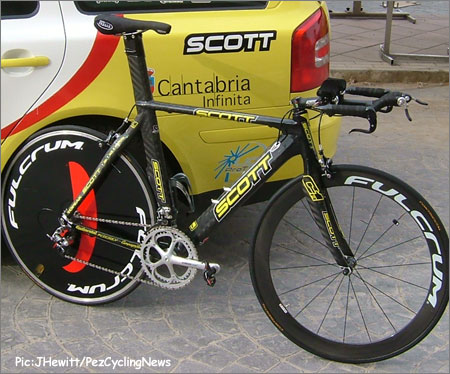 There’s a very real chance this Scott Plasma TT rig could carry the winner of the Tour’s 2006 prologue to victory.

This was a sweet machine. Flowing lines, aero tubes and the exposed carbon weave that has become the company’s trademark. The bike looked the business but the best was to come when I lifted it off the stand. Light was an
understatement, it felt like something was missing, but is wasn’t! Stay tuned for a full write up in the coming weeks.

David Millar all plugged in for some early season testing.

Got Millar!
After I managed to overcome my bike-induced drooling fit I made my way to the
team’s makeshift lab in one of the hotel’s conference rooms. Today’s lucky
subject was no-less than Millar himself: suited, booted and wired up like a
Christmas tree for a batch of tests. The protocol was made up of an incremental test that would take over an hour with regular sampling of blood
lactate concentrations to determine the Brit’s maximum sustainable power
output as an indicator of his current condition. I questioned Millar concerning his form earlier in the camp. His resounding but mildly sarcastic “f*%$ing fantastic” would be put on trial today. 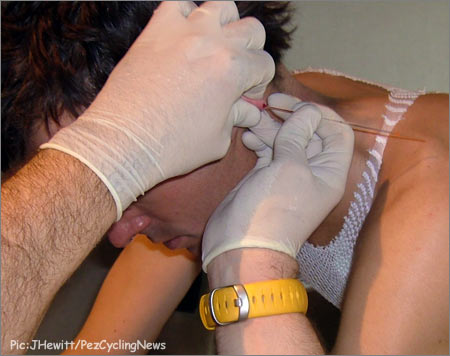 ”I’m cool with team initiation ceremonies, but where exactly did you say that other piercing is supposed to be…?”

David conducted the calibration of the trainer under the watchful eye of team doctor Inigo: “pedal up to 25km/hr and stop” he instructed as the flywheel revved and decelerated abruptly. “Good, we’ll begin”. Millar’s smooth pedaling began its metronomic cadence as the test progressed, his demeanour of professionalism and concentration evident despite the gaggle of journalists and cameramen keen to snap the Tour stage winner in action. It was a rare opportunity to see the medical staff in action up close.

”WhooHoo! Check out Millar, I didn’t know you could get a piercing there…!”

I left the team to their work, and on returning following the test Millar reported that it went well and he was satisfied with his condition.

Got Internet…
An afternoon of transcribing loomed ahead but I took a break to send off this
report back to Pez HQ. The biggest disappointment from the hotel was the fact that there was no Internet connection. As a result we conducted a clandestine scouting mission to hijack a wireless signal in the surrounding city. We finally found the optimum location, a park bench with two bars from belkin54g!

Got Champs?
After the article was on it’s way, I returned to the hotel to catch the riders on their return from training: an epic 200km day. Despite this gruelling outing, the older riders had still found the energy to award a jersey for world champion of training‚ for the winner of the race to the top of the highest climb on the day’s route. The victor, a certain Gomez Marchante.

Got Interviews
After hanging out in the lobby with Dave we made our way to lunch for
another dose of pдella. The afternoon was made up of more coffee, more typing and an interview with the team’s Canadian rider Charles Dionne – winner of the SFGP not so long ago. The hotel was also hosting the presentation of the Nico-Matteos continental team: a professional team in it’s own right but closely associated with Saunier-Duval and one of the sources for the talented young riders that manager Mauro is looking for.

Do you think they’ll notice one less bike around here…?

Unfortunately the presentation itself wasn’t a particularly photogenic affair. Apparently there were two Spanish personalities presenting the riders, but with no knowledge of the popular culture they appeared to me to be two incomprehensible middle-aged men. I’m sure they were nice people though. After dinner came round again the day was done. I’m slowly adapting to the Spanish proclivity for eating at 9:30 in the evening.

Gilberto Simoni: “Pink Goes With Everything!”