We last saw our hero Nick on the lower slopes of the Poggio as he rode the final capi of Milan-San Remo. But as Nick blubbers and gasps his way over the climb, a worthy adversary awaits to pounce, and the plunge to San Remo becomes a duel to the death! (of egos at least…) Fasten your seatbelts and read on…

Again the climb is as steep as ever, 9% in places so by the time I’m halfway up I’m beginning to feel it big time, but I struggle on with words of encouragement from all angles. As I near the top I find a little tempo & relax into the pace of some of the riders around me (the older guys with hairy legs and beer bellies) so rather than pull in at the top to watch the race pass as planned – I find myself elbow to elbow with a local careering over the crest and beginning the descent into town.

I look over at the guy, who’s got his poker face on, he’s probably about my age and looks pretty clued in so I just sit on his wheel as we take the first hairpin. Instantly I’ve lost a couple of metres as I see him sprinting out of the bend, that little devil inside me says “have it” and I sling my bike round the next bend and sprinting down the straight to get back on his wheel. 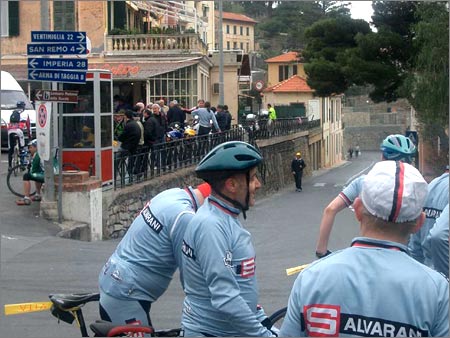 Atop the Poggio, wiley weekend warriors chat pleasantly while waiting to half-wheel some unsuspecting sod into a death-defying descent.

The GAUNTLET IS THROWN
Each time he brakes a bit later for the bends and I catch him glimpse over his shoulder to see if I’m still there – amazingly I am. I’ve never really had the bottle for full on descents, but even with my responsibility as a father to be, somehow I’ve got caught up in the moment (Sean Kelly’s legendary dash after Moreno Argentin in 1992 event doesn’t get close).

This is war, if he thinks all my winter training – 2 turbo sessions and a reliability trial – are going to waste then he’s only kidding himself, because as we come out of the last bend and onto the, (luckily, already closed off) streets of San Remo I’m stuck to his wheel like Blair to Bush and both of us know it’s a fight to the death. Although nobody is even batting an eyelid I’m imagining the crowds are here for us and as we fly towards the finish line I “graciously” refuse to go through as he swings over. 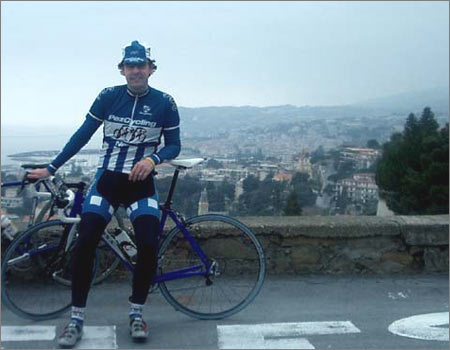 Thar she blows – San Remo in the distance.

Not for me the etiquette of the road, so he’s done a turn, big deal, where was he on the Cipressa? I’m here to win whatever the consequence. Something’s mumbled under his breath and to be fair he does have a point as he’s been at the front for the last 6km. I reluctantly ride through without even a glance, the tension mounting and the shear competitive instinct is almost tangible – he only slots in, right back on my wheel – disgusting behaviour, who does he think he is?

We fly along for another couple of hundred yards and suddenly see a paddle waving policeman trying to direct us down a side turn, “no way Jose!”. We sweep by him on both sides (like a traffic island on a Tdf stage) and continue our battle as he whistles and shouts after us. We turn onto the Via Roma skillfully avoiding a “Esta The” banner being fixed to a barrier. 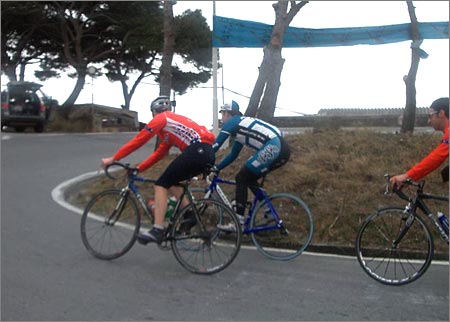 Descending the Cipressa. Note the guy sans-lid in back.

I swear I hear cheers (or cries of disbelief?) as suddenly the slimey continental drops a gear and jumps me on the inside. I think my legs are going to explode but I manage to get out of the saddle and pull him back so that the two of us are now hurtling side by side down the centre of the road. The only problem being we’re a good 500metres from the line and he’s in as poor a state as me… Both of us slow dramatically, our heads flapping around as we both gasp for air I think we simultaneously realize the absurdity of what we’re doing.

But with a large crowd clustered at the finish we felt duty bound to continue and so I find myself making one last effort and a final lunge for the line. I reckon I got it, he’d definitely say he did (he’s Italian after all) but either way we both sat up grinning from cheek to cheek and even got a bit of applause! Anyway he actually was quite friendly once we’d crossed the line and I’ve certainly got him to thank for a truly memorable introduction into La Classicisma – the Classic of Classics as well as a criminal record with the San Remo Traffic Police. 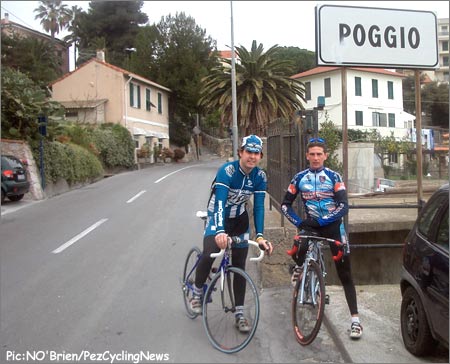 Nick and his partner-in-crime come newest cycling buddy. Funny how the shortest distance between two points is just two wheels.

I crawl back to my Hotel for a quick change and 30 minutes later I’m pushing my way through the crowds back to the Via Roma to await the finish (and see how it’s really done). The race is live on big screens on either side of the Podium and as I get there Bettini is attacking over the Cipressa – past my grafitti perhaps? (no doubt without a blink). Twenty minutes later my waiter from the morning is proven right, as the crowd go wild for local boy (born in La Spezia just down the coast) Petacchi thunders past to collect his first San Remo win and so conclude my first San Remo experience proving my theory correct, that La Primavera is still as special as it ever was. 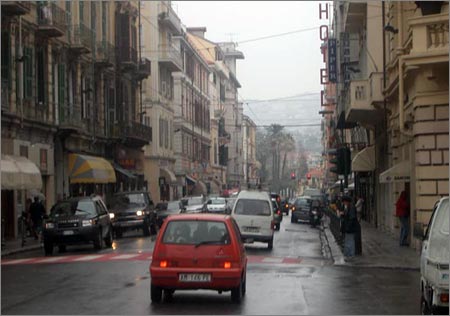 Via Roma after the battle.

• To experience Italian cycling for yourself visit: www.GrupettoItalia.com

Read Part 1 of Seeking San Remo: The PEZ Report
Like PEZ? Why not subscribe to our weekly newsletter to receive updates and reminders on what's cool in road cycling?