Al Cabbad’s email directions instructed me to “walk up one block to Flatbush, then a half to 5th Ave. Make a right on 5th for five quick blocks. Hopefully you will be shocked enough to let all Pez readers know about us!” And I was on my way to Brooklyn to meet R&A Cycles.

On a recent trip to New York City, for a ‘holiday’ with Mrs. Pez (taking some much needed time to get re-acquainted after a long stretch being good parents to our young daughters), I’d planned a small travel extension to Brooklyn to meet for the first time one of my oldest clients, see his shop first hand – and Al Cabbad – the “A” of R&A Cycles – was on board to meet The Pez! 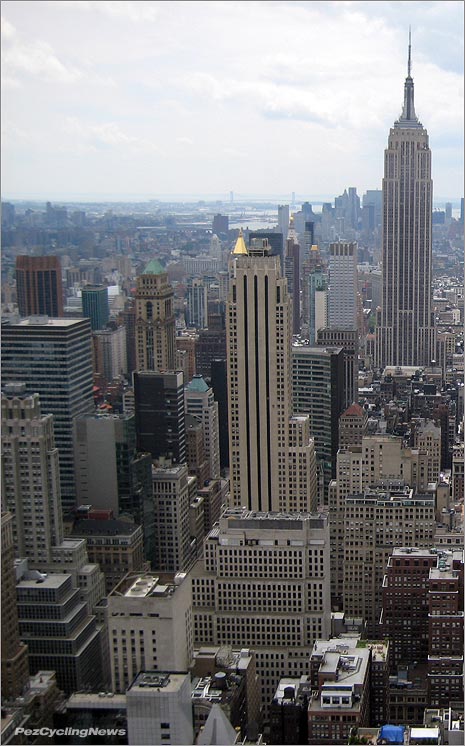 Looking south from the top of 30 Rock – 78 stories up – R&A Cycles is somewhere across the East River in the upper right corner of this pic.

In the interest of full disclosure, Al has been a client of PEZ since 2005, when R&A Cycles banners first appeared on the site. Fast forward six years and we still had not met each other. 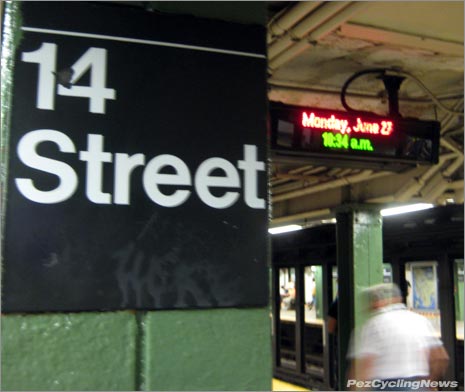 While the shop started as a brick & mortar ‘local bike shop’ in 1976, Al launched his first website back in the early 1990’s, when a 56k modem was considered ‘hi-speed’, and laid claim to “the first online cycling mail order website”. Today the business is a balance between a thriving brick & mortar retail shop, and their constantly growing online sales division.

But I knew all that, what I really wanted was to see the store in person, and finally meet Al. 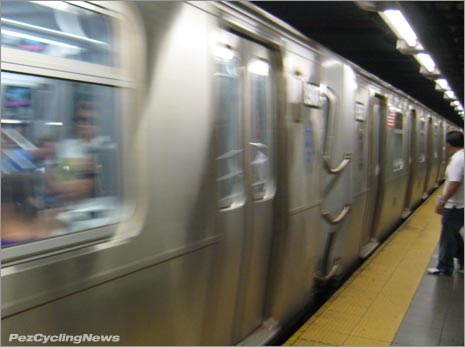 So on a morning when Mrs. Pez happily ditched me for a half-day exploring Macy’s on Broadway, I headed to the subway station to catch the N train from midtown Manhattan to Brooklyn. It was my first time in the Big Apple, and I was fully caught up in the excitement of the urban center of western civilization. Coming from a city that just got a light rail line to its airport last year, it’s a pleasure to be in a city where public transportation is so well developed, and learning the metro system in a new city is always a welcome adventure. 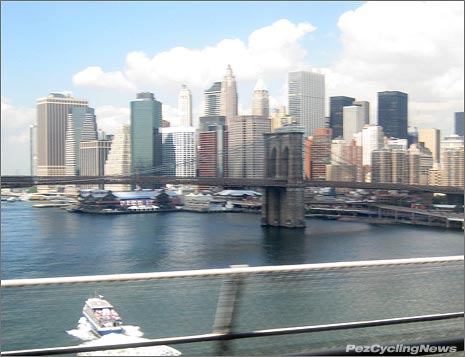 In spite of the well intentioned plans, this was as close as I got to the Brooklyn Bridge… this time.

Like most of the subway lines in Manhattan, this one travels mostly underground, but I was pleasantly surprised when the track slowly rose up and above sea level, than climbed onto the Manhattan Bridge to cross the East River into Brooklyn. 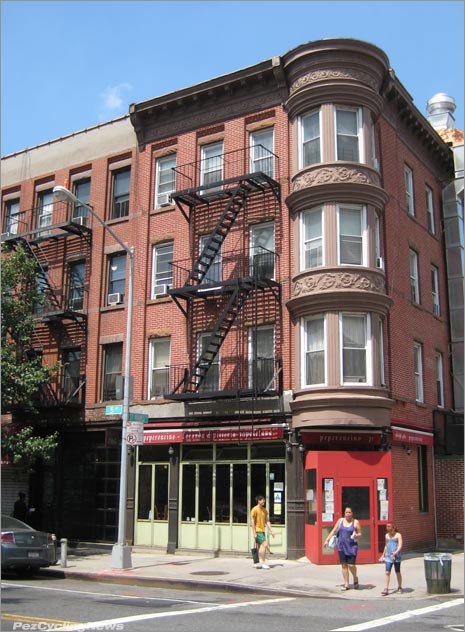 After 3 days of seeing the world’s tallest buildings, emerging from the Pacific Station revealed a whole different world – one that seemed much more down to earth. 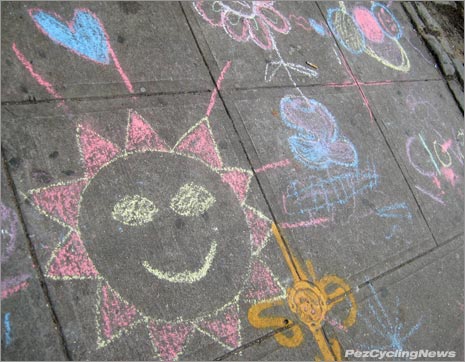 This is a neighborhood where people actually live.

Aside from the new basketball stadium being constructed across from the super-mall nearby, in just one block I was in old town Brooklyn – tree lined streets, two- and three-story buildings, mix of residential & commercial… a real neighborhood. 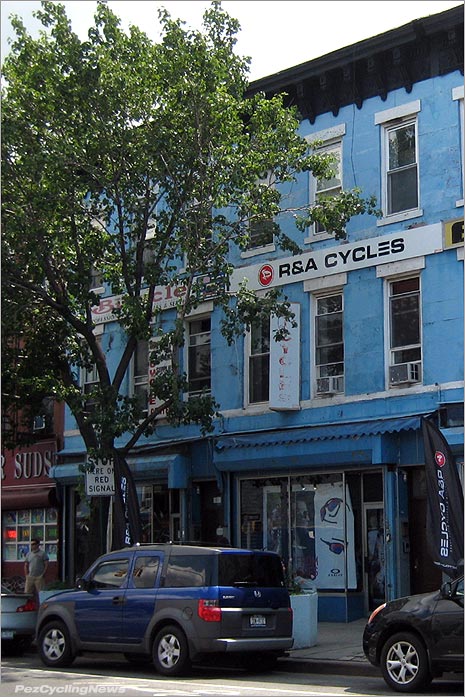 The R&A ‘empire’ is diversified well beyond bicycles, including a hardware store, a dry cleaners, and more – all run by different members of the family.

I’d heard that the R&A brand was fairly prominent on the block – Al’s grand parents (he’s of Argentinean and Syrian decent) started a couple of small businesses way back, the success of which allowed them to purchase some buildings in the area – some easily noted by the large “R&A” business signage. 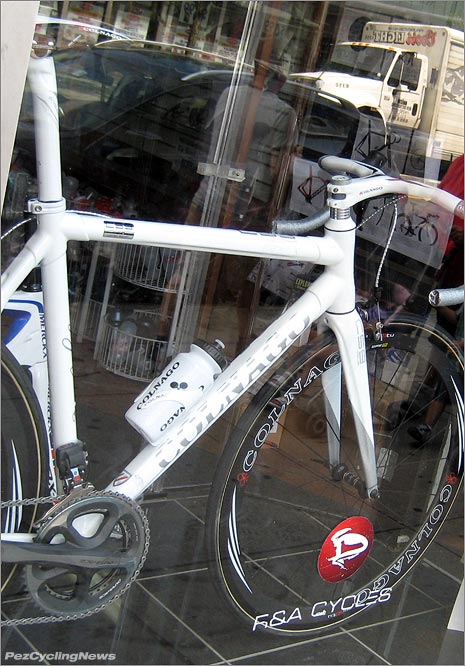 I was as surprised to see this beauty in the front window as I was to see no bars in that same window.

It’s a modest neighborhood – almost the antithesis of a lot of the big brand “concept” stores you see in some places, but I knew I was in the right spot – and that this was no ordinary shop when I spied the all white Colnago C59 Limited Edition displayed in the window, Al confirmed it could be yours for a US$16,499.00. 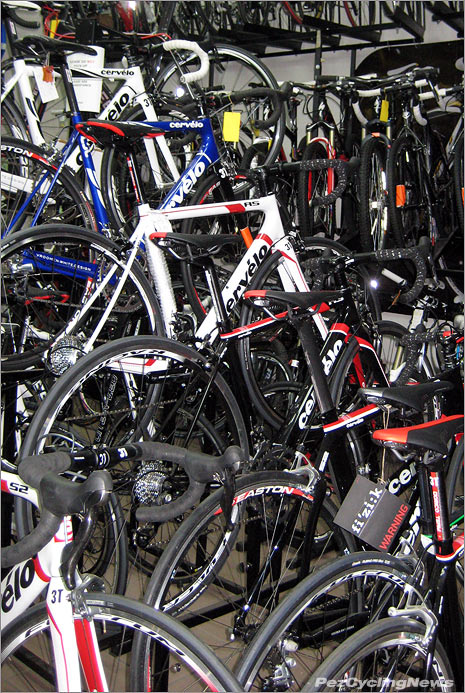 The shop itself is actually 3 storefronts expanded inside to operate as one space. My first impression as I walked through the door was of a well stocked, but small retail bike shop – with walls lined with wheelsets from ZIPP, SRAM, HED, Corima & Lightweight, and the ceiling hung with top line frames from Colnago, Merckx, BMC, LOOK, Kuota and more. 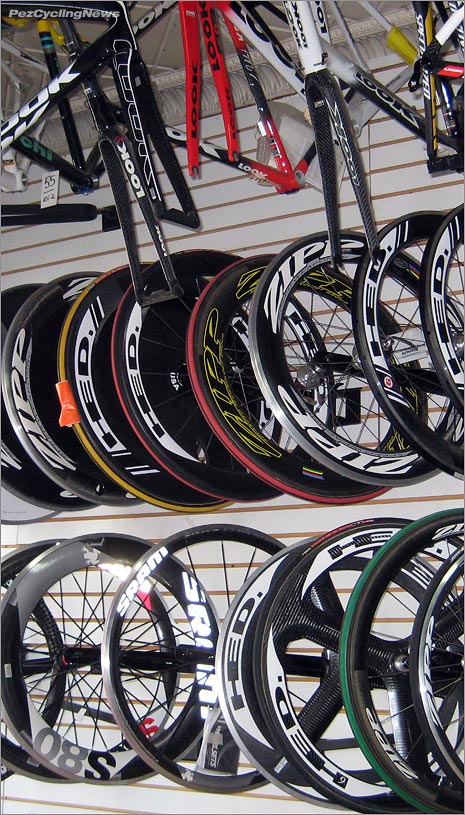 Just a few of the 15 different wheel brands they stock.

I knew R&A stocked a lot of the best brands (Al corrects me: “ALL the best brands”), but I had no idea that all of those would be on display in the store. And when he told me that he stocks “in every size, and most models” – he wasn’t kidding, and he wasn’t trying to brag – he was just stating a fact, and one advantage they have over other stores: R&A has your size in stock. I’d never seen such a huge selection of bike candy in any one retail space. 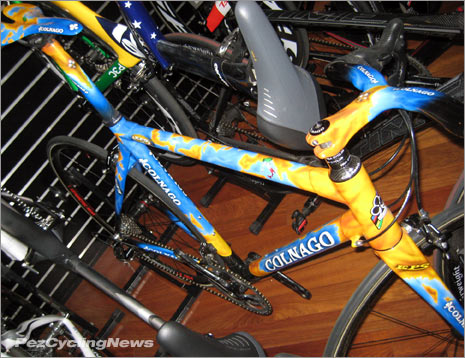 In addition to a massive offering of road frames and bikes (the website lists 20 major brands), R&A also does a sizeable custom business – Al pointed out a custom hand-painted in Italy Colnago GEO frame that was covered in a map-like paint scheme – with the Italian boot prominently positioned on the top tube. If you want one of the 25 in existence, you gotta call R&A – and buck up the $6000.00 for the frame set & seatpost. 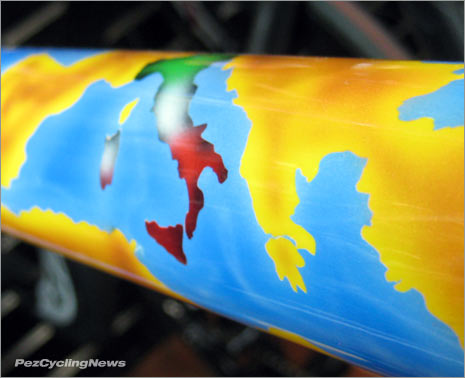 As we walked though the store, I wondered how in this down economy, R&A could appear to be so thriving. Obviously they’ve got selection and inventory covered, and the R&A ‘call center’ is plainly visible behind the front counter – a place Al spends a lot of his own time – personally taking orders and working with customers. If you call them either toll free inside the US at 1.800.825.3762 or from outside the US at 718.636.5242, Al will likely answer the phone – and if not – he’s usually nearby.

And while Al has hired the right staff to make this shop runs the way he likes it, he’s the driving force. 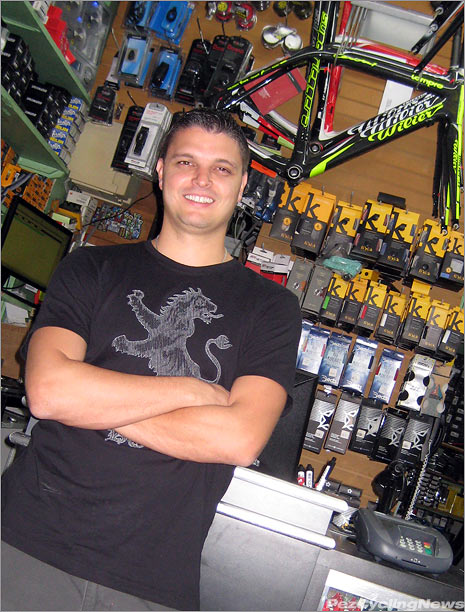 Call R&A and there’s a good chance you’ll talk to Al. And if you’ve never shopped at R&A Cycles – you should – they might just become your new LBS (local bike shop.)

I was surprised to learn that Al is still a couple of years south of his 30th birthday, but he’s clearly the man in charge. As well as a passion for cycling (a pre-req for any cycling-related business), Al’s drive to succeed emerged at a young age – from back when he was hustling homemade cd’s on neighborhood streets as a kid, to selling whatever he could make a buck on, to being the youngest deejay (at 16) to play at New York’s famous Limelight club. He’s got a motivation you don’t see in many people, but you often see in successful ones.

The fact that he’s riding less because he wants to ‘focus on building the business while he still has the energy’ is more proof of why R&A keeps growing.

He reminded me of a harder working version of myself… and maybe a smarter one too. 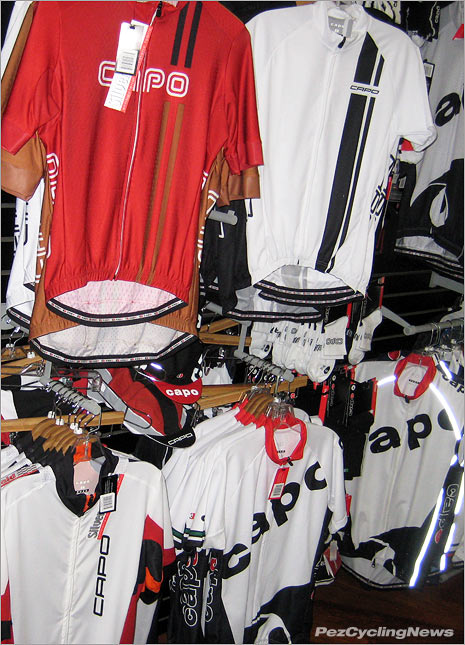 You need the latest kit from Capo? R&A has your size.

For those not lucky enough to visit the store in person, the R&A website is a full storefront that comes right to you. And as I talked with Al while prepping this article – he reminded me (again) that they have almost everything they sell in stock – so orders ship either same day or next day. 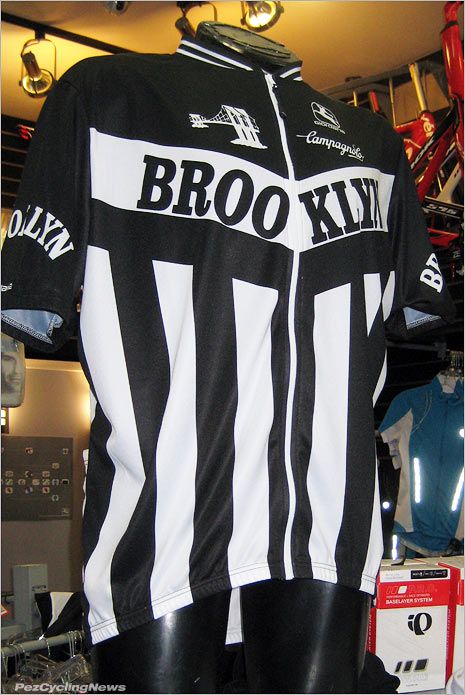 What’s a shop in Brooklyn without a line of these?

As part of R&A’s global sales strategy, they have staff who speak Spanish, Portuguese, and French. 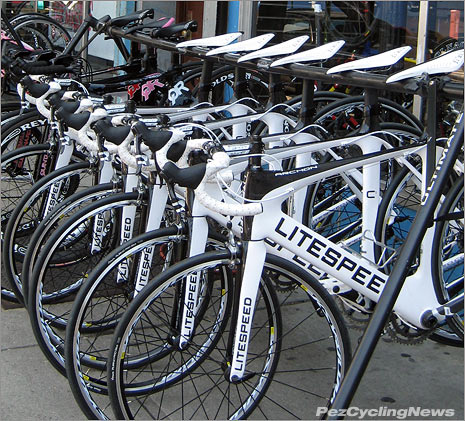 When stock space inside gets tight, they just move inventory to the sidewalk. 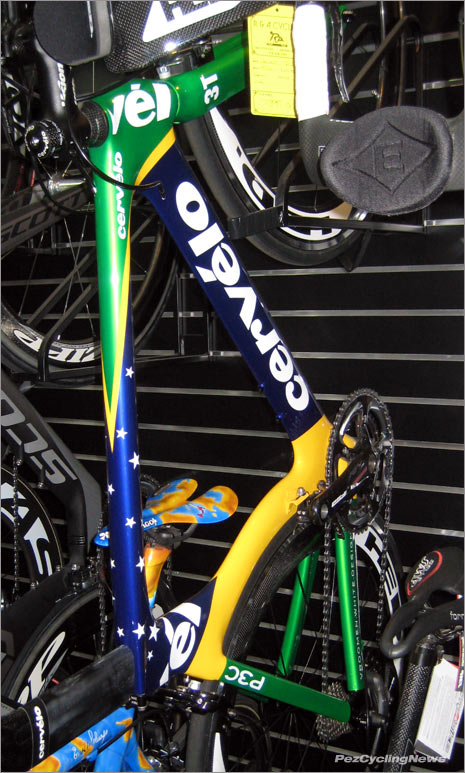 Not only is there a huge selection of TT and tri bikes in store… they’ve got some pretty cool paint schemes – here’s a Cervelo P3 2011 “Brazil” Ltd. Edition bike – ONLY available to pro teams… and R&A customers. 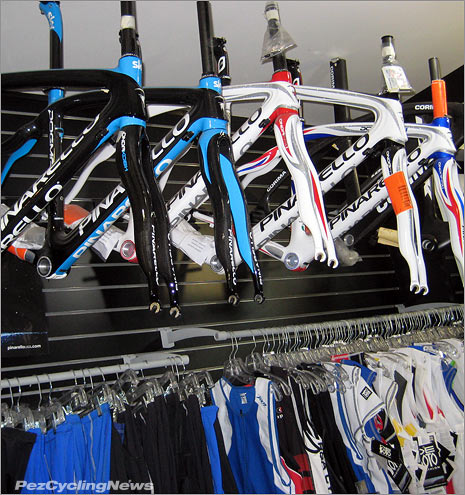 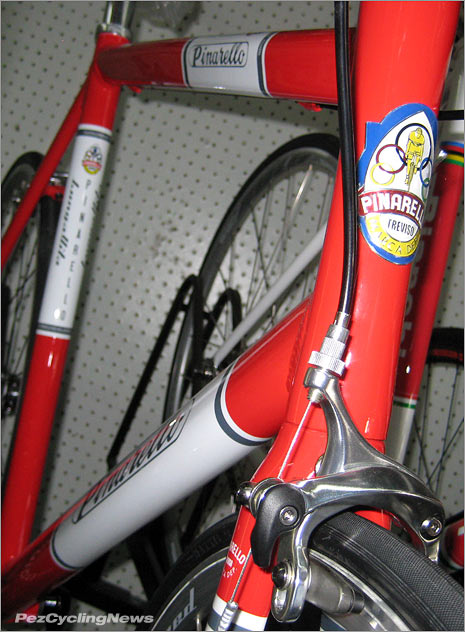 As our time came to a close, Al took me to his ‘secret’ warehouse – complete with dirt floor, handmade shelves, and housed in a building that was easily 100 years old. Aside from the narrow spaces to walk between the shelves, it was a bit like the raw materials division of Willy Wonka’s Chocolate Factory – except filled with bike gear. Each aisle was packed floor to ceiling with bubble wrapped frames – the Colnago section, the Pinarello section, a section for every brand Al carries, fully stocked with frames waiting for owners. Then he showed me the wheel section – boxes and boxes of very high-end wheels – and the bars, stem, saddles, sections – everything you need for whatever size you want is right here.

They say that the biggest and best are in New York, and although Brooklyn is truly a city, place, and headspace unto itself… R&A Cycles certainly fits the bill.

Check ‘em out online – I’m pretty sure they’ll have whatever it is you desire…
RACycles.com

The store is open pretty much every day except July 4th (and Christmas?)
And you can find em in person at:
105 5th Avenue, Brooklyn NY, 11217 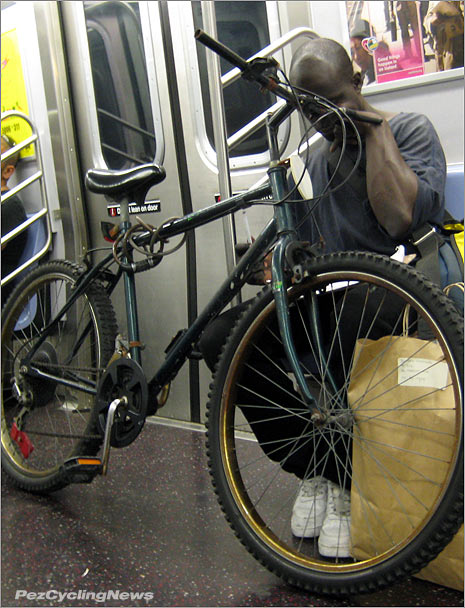 On the train back from Brooklyn I ended up sitting across from this guy. At first I wondered why he would bring his bike on the subway, then I deduced he was a messenger, delivering that paper bag to a high-end clothing store addressed on the label. Being a former bike courier myself, I chuckled at the thought of taking the train to make one delivery… unless this guy gets paid by the mile. But a closer inspection of his bike was even more entertaining. The first thing I noticed was the overall beater-ishness of the rig, but it got worse. I could see that his front brakes were completely mal-adjusted – one of the brakepads was set to contact the actual tire. Hmm – no front brake for you. So my eye naturally wandered to the rear brake, which looked like it was in fact adjusted properly so the pads would hit the rims. But as I gazed back to the front of the bike, I noticed the handlebars were missing a key piece of hardware… the lever for the rear brakes. Okay then… no brakes for him. Maybe that explained why he was taking the subway from Brooklyn to upper Midtown Manhattan.