With his return to the Pro Peloton it seems the whole cycling world is once again interested in Lance Armstrong. While the headlines ponder the will he / won’t he of Le Tour, Armstrong is focused on his training and lucky for us, he let PEZ-man Ted Arnold tag along on a recent 5-hour Hill Country Training Ride. Here’s a look from shotgun…

Wednesday, 19 November
• 6:45 AM – Mellow Johnny’s Bike Shop in Downtown Austin is the designated meeting spot and is where I find Dave Bolch, LA’s right hand man in Austin. Dave’s friendly demeanor is the stuff of legend, and quite simply put there isn’t much he can’t do. From making his own espresso this morning, to taking care of Lances’ bike needs, Dave is the do-it-all-and-then-some type of guy.

• 7:17 – After a caffeine boost and some breakfast we make our way to Lance’s place to start the ride. Dave’s stint with LA goes back to the early USPS Team days where he was a soigneur. We hit the gated drive and pull up to the guest-house garage, where the bikes and toys (like an all Black Chip Foose Pontiac GTO*) reside.

• 7:32-7:50 – Dave readies the follow vehicle for a long day. In the back a few sets of Bontrager training wheelsets with 25mm tires and traditional spokes, along with food, bottles, and all of the clothing needed for a day in the saddle. A few minutes later Lance makes his way down from the main house dressed in LIVESTRONG cycling clothes and ready for the day.

• 8:00 – Occasional training partner and long time friend John “College” Korioth arrives and the jawing begins. It will be a theme throughout the day, but it starts over a wheelset. It seems a certain someone doesn’t approve of John’s choice of lighter wheels and tires so the boss goes to the garage to make sure John has a set he can use just like the set on the boss’s bike. 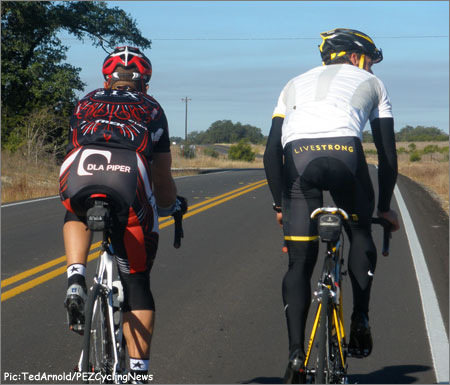 • 8:05 – Realizing that we’re missing a few goodies Lance needed, it’s back to the shop while Lance and John make their way southwest from central Austin. By 8:30 we’re on their tail and Dave’s long slog at 20 mph in the driver’s seat begins.

• 8:33 – It’s rush hour as Dave tells me how Austin’s sprawl has ‘removed’ some of Lance’s favorite old routes from the list. Soon we have our first follower for the day who doesn’t realize she should pass us in the three open lanes to our left. Oblivious to what goes on behind, Lance turns over the pedals in perfect, round circles while Korioth, a Masters National Champion mashes a bit more.

• 8:42 – As we make our way out of town Armstrong’s Oakley shades fly off his helmet and a certain eagle-eyed PEZ-man eyes them tumble into the brush along the road. At a stoplight later, I hand them back while I discuss with Dave just what the Barney Fife’s of the world think of some guy in lyrca on a bike holding up traffic on their small country roads. Dave says they usually figure it out quickly, all is okay and go on their way. If traffic starts to stack up behind the car Dave will pull ahead so they can pass, waiting ahead so everyone in Mayberry stays happy.

• 8:55 – As we pass a cyclist going the other way the subject comes up of the average rider getting passed and trying to jump on Lance’s wheel. Sometimes it will happen but pretty soon they go way over their limit and that’s when things can get dodgy. Before we finish our talk Korioth punctures and it’s time for a nature/Blackberry break. Lance peruses his mail for what will be the first of several sessions during the ride. Dave laughs that in the 5 minutes after the Blackberry goes back in the car the thing goes crazy while people respond to what Lance just sent out. 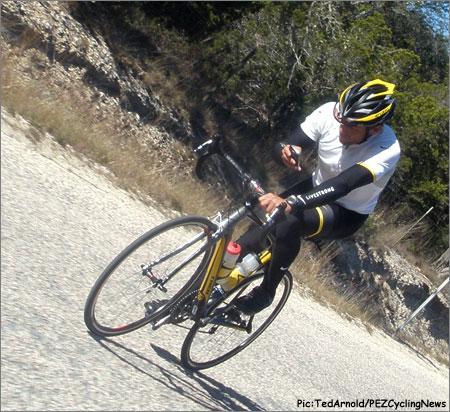 • 9:24 – As we make our way towards Dripping Springs, Texas, we get our first hearty redneck “[email protected]&K YOU” from a car going the OTHER direction. While some rednecks prefer trucks, this guy prefers his Geo Metro and I can only think to myself some meth lab back in the sticks is missing it’s owner. Dave adds in that he finds it ironic that when Lance isn’t dressed “Lance” enough he isn’t as recognizable to people and gets hassled more. Apparently, his white Nike jersey this day isn’t “Lance” enough as the honks and hand gesturing happen several more times. I wonder to myself what outfit qualifies as “just Lance enough”.

• 10:06 – As we pull off Bell Springs Road near Dripping Springs, Dave sees his wife, who honks in support. His local knowledge of the roads around here helps when Lance needs to plot a course or like today when changes pre-planned the route as he goes. A few minutes later were on a loop Dave likes to ride when he can sneak out on bike for himself. It’s at this point I’m officially jealous and wish for a second that I was on my bike, but not struggling to hold LA’s wheel on the hill as Korioth is doing. 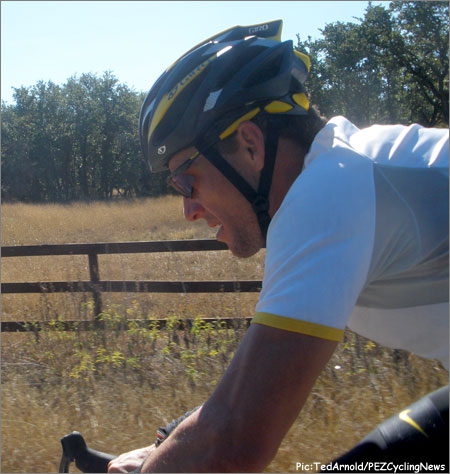 • 10:14 – Boys will be boys as John and Lance take turns grabbing the back of each other’s saddles to catapult ahead and playing side-by-side chicken with one another, soon Lance raises his hand moving it in a flapping jaw motion mere inches from Korioth’s face, something that will be repeated by both towards one another throughout the duration of our ride. As Night Ranger blares over the Satellite Radio, Dave cranks it and asks Lance if it is more or less white trash than the Sammy Haggar he blared the day before… no answer. 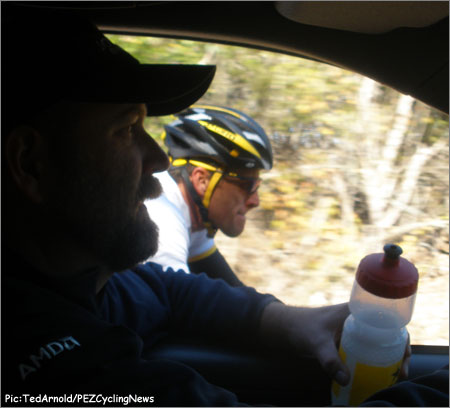 • 10:30 – As the boys grind out the miles Dave gets some phone calls made. Occasionally, Lance slips back and Dave holds two conversations and drives. While Lance stretches his back muscles on the bike the subject turns to Lance’s trainer and how he is working on lean muscles and core strength that will suit Lance for the year ahead. It’s no coincidence that his weight is a few kilos lower than it has been in the past. Somebody is looking pretty ripped.

• 11:15 – After trading some water bottles with Lance and John we quickly pull over to refill some empties for the final push back towards Austin. A simple X marks the bottles with sports drink, and no markings for the regular water. Everything in the follow car has its place so that Dave can be on task. Aside from bottles Dave remarks Lance is pretty efficient and doesn’t take too much in solid food, even coming clean that sometimes he’ll indulge in a Snickers Almond Bar and a coke on a long ride. My stomach growls and I want a Snickers bar… 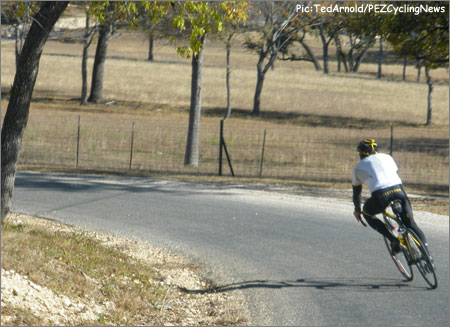 • 11:21 – As Lance takes Korioth for a city limit sign sprint we get the first angry honk from someone in a white diesel truck, and actually on our side of the road. Ironically, he pulls into his driveway some 300 yards later. As we pull over for a stretch and Blackberry check Lance and I laugh over the fact that it happens pretty often.

• 11:40 – The same jackass in the white truck pulls past with the same “f” you honk as before. While Dave takes a call I see Lance look back my direction and then drift back on my side of the car, I comment about a certain level of compensation that some Texan country boys have with their vehicle choices. To our right a guy checking his mail box realizes Lance just went past his house on a bike at 36 miles an hour and he yells a hearty shout of encouragement. 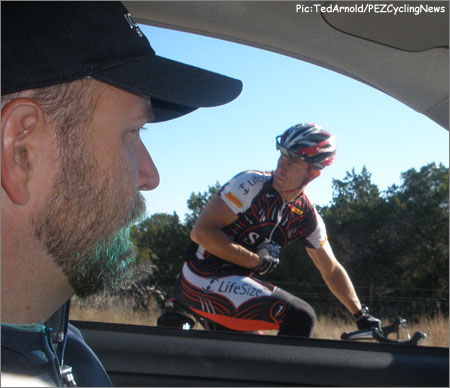 • 11:55 – Getting closer to town Lance catches up with John who kept pedaling when we stopped last, but as the catch is made John isn’t able to latch on. I hand over a full bottle to Korioth and he sends us on our way. After making a right turn onto a slower road LA requests his Blackberry once more and asks where Korioth is, noting he slowed for second so he could latch-on. We all laugh when I tell Lance that John gave it a “Community College” try but couldn’t hang on.

• 12:15 – On the outskirts of Austin now and red lights let Korioth rejoin. He gives an emphatic “never quit” yell with an extra finger wag in Lance’s face. Within seconds the jawing hand motions are fast and furious before Lance answers with a vicious acceleration and a look back over his shoulder at Korioth. For anyone that has followed cycling in the last 10 years I can safely say you have seen a similar glare before.

• 12:30 – Back in town Lance gives me a hearty thanks as Dave is going to drop me off at the shop while Lance rides back to the house. It’s been a good ride along and the start of some great things for PEZ and Lance Part Deux. Hopefully, we can keep up with Mellow Johnny as he rolls through the next few months to race ready fitness. Stay Tuned.

A freelance writer and bike nerd Ted Arnold is living proof that it is better to be lucky than good. After a few stints in the real world and few failed dot bombs Ted landed in the bike industry. He currently works at Mellow Johnny’s in Austin were he spends his time sharing his passion for bikes and writing about himself in third person hoping the boss won’t catch him.
Like PEZ? Why not subscribe to our weekly newsletter to receive updates and reminders on what's cool in road cycling?