Always striving to blaze a new trail – PezCycling News hooked up with special correspondents – The Cutters – to bring you the “real” coverage of the US Pro Championships. You may already know
them – setting the bar high for cycling fans around the block and around the world on the roads of Le Tour – and you’ll see a lot more of them this July. But for now, here’s how some of cycling’s truest fans spent last Sunday in Philly…

– Report and Photos by Tom Shaw of The Cutters –
As summer approaches in Philadelphia it can only mean one thing, cycling, cycling, cycling. Sunday’s US
Pro Championships capped off a great week of cycling in the Pilly area and even though it was cloudy all day the energy at the race was as high as ever. I began my day by meeting up with the rest of the Cutters and Shamu at the starting line to pump up the Posties. They were excited to see us and had high expectations on the day.

The Cutters’ pet, Shamu, has really become an unofficial mascot of the Postal team and even these cutties couldn’t resist jumping on the bandwagon.

After watching the start we jumped in the car and headed for Manayunk, home of the Wall. The Wall is one of the toughest climbs on the US circut because of its mile long 17% grade, which the riders climb ten times. The Wall also host the best parties of the race creating a festival like atmosphere. There are live bands, young people, old people, drunk college kids – you name it and it’s there. There are so many people jammed on either side of the road that you can barely move, but being the city of “Brotherly Love” it all works.

O’Brein’s Water Hole has become a US PRO Champs Landmark. In addition to cooling down the riders as they climb up the Wall with a sprinkler type device, tired and worn out fans can refuel here as well.

The reaction to our Cutters shirts was great. People were yelling to us, “Tape me in!” and “Go you Cutters.” There were even some people that recognized us from the 2002 Tour coverage on OLN. With the race close to finishing we got in the car again and headed to Lemon Hill were the real Philly Cycling fans are. As we were walking up the backside of the climb the announcer yelled out over the mic, “hey it’s the Cutters,” and went on the explain the the crowd of a couple thousand that we are “famous” for our Tour exploits.

This Reggae Band rocks the crowd from the a porch along the Wall.

The feeling on Lemon Hill is very much like what you experience at the tour in the Alps, just lots of love for cycling. As the riders went by for the last time everyone quickly gather around all of the generator powered tv’s to watch a great field sprint unfold on the final straight. Attention American riders: wake up and learn
about home field advantage. But all in all it was another great day for bike racing in America. Tom Shaw 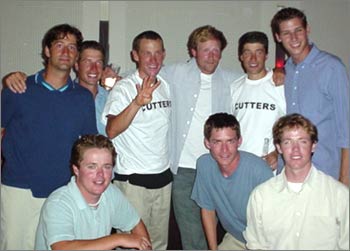 How the Cutters Came to Be.
Tom Shaw & Tom Sabol first met at LaSalle University as roomates and track teammates in their freshman year where they quickly found out that each shared a passion for cycling. After the 2000 Tour de France (Lance’s 2nd victory) Sabol and Shaw knew that they could stay away and quickly made plans to invade the 2001 Tour. Armed with a tent, American flags, Cutters t-shirts, and US Postal Priority Tape they staked out their position in the French countyside. It didn’t take long for the two to notice that the fan base for the Postal was paultry in conparison to theEuropean teams so they decided to take it up a notch.

They needed something that would truly separate them from the crowd. They found it when on rest day between the Alpine and Pryriness stages. It was an inflatable killer whale better known as Shamu. The
two quickly went to work tranforming the whale into the ultimate USPS “mascot” and from that day on the
roadsides of the Tour de France have never been the same. It didn’t take long for the USPS riders and
coaches to catch Shamu fever and even invited him to their victory party in Paris. Recognized internationally, the whale has become a cult symbol of cycling. People always ask Tom & Tom, “Why a Shamu?” and they always answer, “Exactly!” 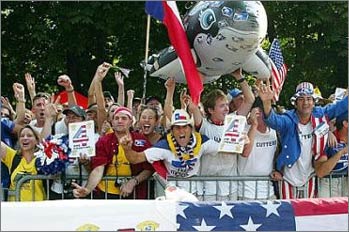 Upon return their return Tom & Tom immediately spread the gospel of the Tour and decided that they
needed to assemble a bigger contingent for the 2002 Tour. They turned to their former LaSalle teamates and hand picked four people who they felt could handle the pressure of completing a Tour and live up to the Cutter ideal of, “Shamu, Country, Tour.”

With a bigger and better crew the 6 Cutters stormed the french countryside and showed the Europeans how we do it in America. Coincidentally, Lance went on to win his 4th Tour and has repeatedly conveyed how the Cutters made all the difference in his success.

As the 2003 Tour approaches Tom & Tom have put together another strong crew. They will be joined by2nd year veteran Brien Bell, and newcomers Dooner and Chu. As preparation for the Tour Tom & Tom crashed US Postals Training camp in Arizona and partied on the Manayunk Wall at the US Pro Championships with their good friend Shamu. So Look out Frenchies they’re back.