The 2005 Giro d’Italia route was worth the wait as this edition features some classic climbs in the Dolomites and Alps, including the legendary Passo Stelvio. At 2758 meters high, over 20km long, and so many switchbacks, it’s a brute that invites action from only the manliest men. Scott Keller is such a man, and filed this report… 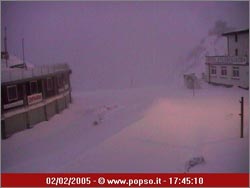 Today the pass is closed – covered in snow as you can see on the webcam at www.bormio.com – but in September only the roads were closed as part of a gran fondo, which is where…

Our story begins…
I was lucky enough to ride Passo Stelvio da Bormio when the roads were closed on Sept 4th this year. I was unlucky because 7,000 or so Italians, Swiss, and Germans decided to do the same, so there was a bit of traffic going up! My Italian friends Marco and Giovanni picked me up and drove us to Bormio where our Gran Fondo began. 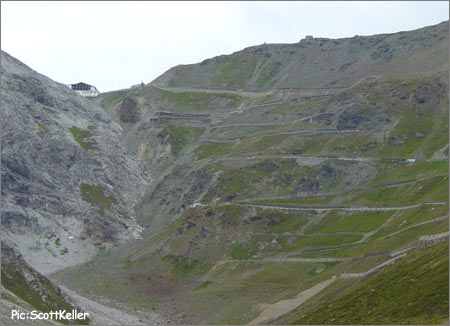 I was also lucky enough (or unlucky) to ride the Stelvio from the easy side, Bormio, which is only 21 kms with an average grade of 7.1% and 1553 meters of climbing. The riders in this year’s Giro have to hit the climb from the North side, which is a pretty nasty climb, especially at the top where they hit endless amounts of switchbacks (unlucky again since I love switchbacks!). 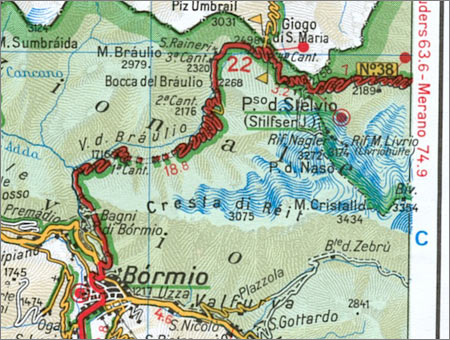 I got dizzy just riding down them and couldn’t straighten my neck out until half way through the ride when we were in Switzerland! Even with the cramps in the neck from bending around the tight corners I wanted to turn right back up and attempt to climb back to the top! But my two Italian friends had other ideas, so off to Switzerland and around the mountain until we once again climbed damn near the top of Stelvio again. This time we went up Passo Umbrail da Sta. Maria, which isn’t too simple after 100k in the legs and 13.6 kms more of 1500+meters waiting to crack you.

BUT LET’S START AT THE BEGINNING
Starting the Stelvio from Bormio was amazing. Bormio is in a huge valley surrounded by the most prestigious climbs in all of cycling. From here you can hit the Gavia, Mortirolo, Trafoi and tons of other Giro climbs in any given direction. We hit up the Stelvio on the day the National Park closed the road to cars. I had no idea what I was getting into!

We started heading up around 9 AM and it was a nice clear day with tons of cyclist heading up. Marco and Giovanni gave me the go-ahead to wait for ‘em at the top so I started at a good pace passing a few packs here and there. It wasn’t until it opened up a bit that I saw 1,000’s more people in front looking like long snake slithering up the mountainside. When I saw the first set of real switchbacks and the Ricolo guys hootin their horns, I thought I may have reached the top, but after only 45 minutes… I knew I wasn’t done yet.

In case you hadn’t noticed, you’re getting’ close to the top… of the world.

After the first set of switchbacks you get pretty high up and the temp starts to drop. It opens up to this huge valley between the tops of the mountains and you still have 7 km or so to climb. With a nasty head wind and a false flat for a while you start to get pretty cold and slow down, getting distracted by the open fields and great views around.

The tops of the Dolomites offer up their own brand of Distractions.

Coming from the Bormio side was no picnic but it was a great ride. Halfway up you start going through the tunnels. There are two types of tunnels too, some that are drilled directly through the mountain and super cold, and tunnels built out of concrete. I prefer the mountain ones where it’s super narrow and you’re afraid to hit the walls because they are so jagged. When I was descending I had to go really slow through some of them because people were still grinding there way up in the middle of the road looking cross-eyed…sort of like me an hour earlier up Umbrail! 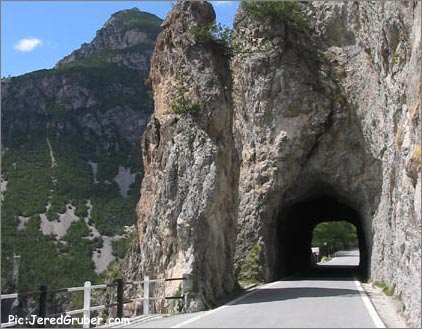 The roads feature a variety of tunnels – some lit (like this one), and some not so much….

After I saw my next pack to chase down, I picked up the pace but soon wished I hadn’t since by the time I caught them I saw a bunch more switchbacks that led to the summit. To the left you could descend to Switzerland via Passo Umbrail, which I had no intention of climbing 4 hours later, but did anyway. To the right was the top of Stelvio and a nasty kick to finish it off. Once at the top I was occupied by the glaciers to the north since that was the first time I’ve ever seen them.

Somewhere near the top… we think.

I was one of the first ones up so I was quick to get a bratwurst from the German/ Austrian guys yelling at me to buy one in 10 different languages. After a while tons of people from every direction started pouring into the little summit village.

Remember – always climb with your buddies – in this case – Marco & Giovanni.

When Giovanni and Marco arrived we bailed down the North side which was amazing (and up which the Giro passes), 40 minutes or more of pure downhill and what felt like 100 switchbacks! That’s why I really wanted to climb from that side, but maybe when I watch those guys suffer in May during the Giro I will change my mind, or maybe I will just have to head up after them to get a real taste of it.

Switchbacks on all sides – let’s ride!

After climbing from Bormio to Stelvio we descended down those amazing switchbacks to Switzerland, looped around to the left (flat/rolling for 25 kms) and that’s where you start to climb straight outta Switzerland on the pretty demanding, sometimes dirt/rocky road of Umbrail. Going through Switzerland was like a fairy tale, the smell of the air was clean (compared to Italy), everything was bright green, and all the houses looked like they were from a movie set – even though they were hundreds of years old they still looked brand new.

We’re not in Italy anymore… Is that yodeling I hear?

By the time we reached Umbrail I was getting a little bit tired since I offered my Clif bar to my buddy who cracked through the valley. So going up Umbrail on an empty stomach was a bad idea – as I would soon find out! It turned to a rocky dirt road 3 km’s into it. It may have only lasted 2 km’s or so, but seemed like forever. I liked it, felt like I was back on my Mtn bike again!

The climb up the Umbrail features about 3km of dirt road.

Here there were a few people coming down from Stelvio who must have been Swiss heading home and didn’t want to return back down the same way they came up. I would stop and take photos and a few of them would say something in German, to which I had no response, only “Sorry, I only speak English and really poor Italian”. So they would start chatting in near perfect English with me!

Most of them would tell me about how every year they do this ride because the National Park closes the road to cars, and that is why 7,000 people or so show up to this every September.

With scenery like this all around, it’s a challenge to keep your eyes on the road.

Out of all the climbs I must say Stelvio is by far one of the most scenic out of all. It is easiest to actually see the road back down to where you go, because it literally descends straight off the mountain. I have no idea what those road engineers were thinking or how the hell they even managed to put a road where it was, but I was sure glad they did!

Once at the top – treat yourself to a wonderful local souvenir, or even a bratwurst and beer.

Climbing the Stelvio took me an 1 hour 15 minutes going pretty hard and only stopping a few times for photos. It is damn long but pretty gradual. In comparison to the Gavia and Mortirolo, the Stelvio is easy/fun (coming from the Bormio/South side), but coming from the North side with way more switchbacks, which the Giro will be doing, will be a hard day in the saddle.

Info on the event and road closures at StelvioBike.it

See The GIRO
If you’re thinking of seeing the Giro, check out the trip from www.PodiumTours.com