Roadside PEZ: The Strade Bianche can be one of the most exciting races on the pro calendar and the 2017 edition didn’t disappoint. Our PEZ man in Italia, Alessandro Federico, was ‘Roadside’ to take in the charm of the white road Classic. 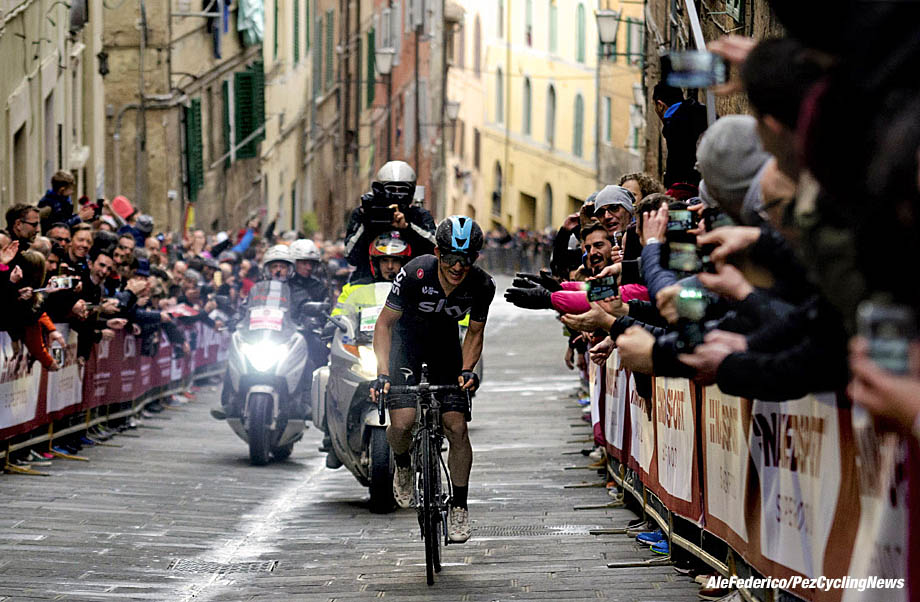 Michal Kwiatkowski climbing the Santa Caterina road to the finish. The Pole will be the winner for the second time

After almost five hours of chasing and eating dust, the moment we were waiting for has come, the passing of the race. My friend and photographer Angelo (named and know as Pedale.Forchetta) and I are at the end of our chasing day, but the best has yet to come! We are sitting on the stones on a short steep narrow road in Siena, surrounded by hundreds of fans. There’s a kind of excitement all around and you and you fill the time so you don’t realize it has passed by. Year by year you can just remember that moment when the race passes so close to you that you feel part of it. This time it was Kwiatkowski once again (he also won in 2014), but you really don’t care who’s the first because you’ve seen all these guys struggling on the dusty hills and fighting against the strong wind and you know all of them are kind of supermen. You just respect all of them. The crowd shout so loud that you can’t hear riders breath, despite the fact that they pass half a meter from you. And this is how my day at Strade Bianche ended. 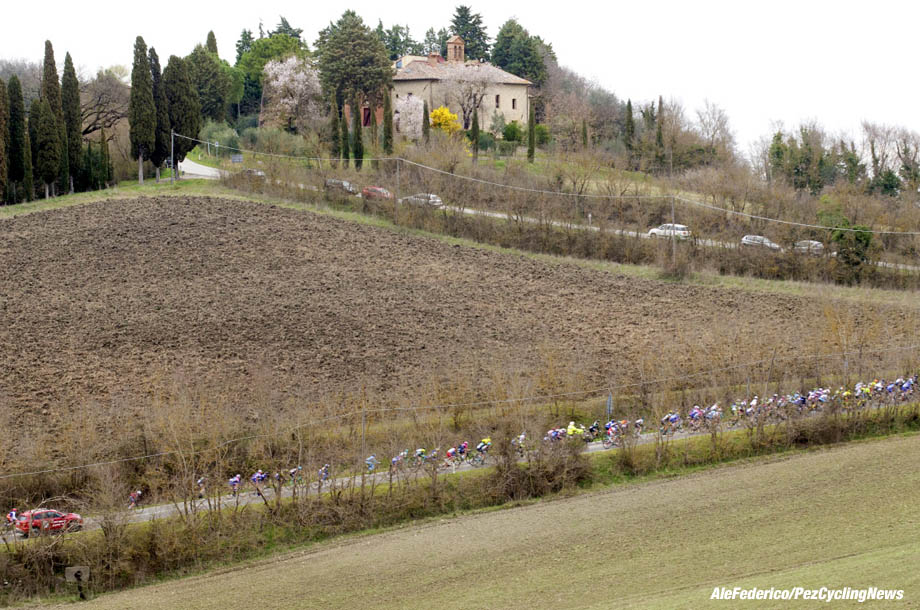 Flowers enjoy the passage of the ladies race in Radi

Flowers on the road
Any cycling fan knows that the name Kwiatkowski in Polish language has something to do with flowers. So that now I can say that the whole day was having something to do with them; kind of clues that it was the day of Michal. Flowers on the hills all around, just blossomed and colorful, especially yellow mimosas and white almond trees which are the first of the season, which is a bit delayed this year. Flowers also on the bike, the ladies competing before elites, me and my friend Angelo had one of their passes in the plan and so we waited in Radi, after 50km from the start. The day is very cloudy, especially looking west (where any Atlantic storm comes), but the air is quite comfortable, last year was very cold. The forecast is for rain but we know already the weather of the area and we are more focused on the wind and not on the rain. Radi is very well protected by hills and there’s no wind but we know that going south we will meet it. The ladies passage comes and goes: all together, “gruppo compatto” as we say. 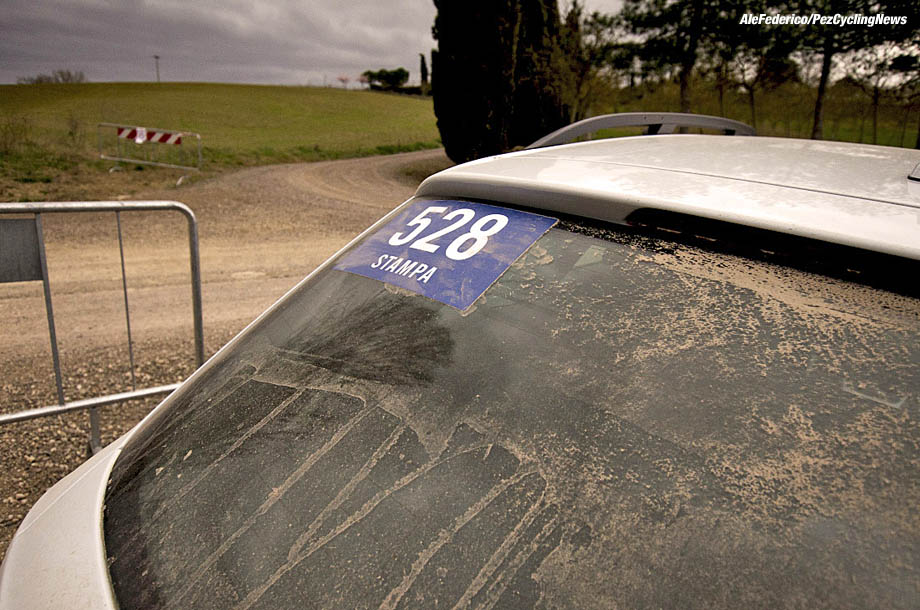 The dust is already very thick on the car after only a few kilometers of ‘White Road’. Just imagine riding in the bunch for 50 km

The local bar
The menu of the day has us leave Radi and we move to sector number three to wait the men’s race. On the way we pass through a small town named Murlo and since we have time – and because we are talking about a café we drank in at the Giro d’Italia last year – we stop the car and look for the local bar. Any town or village in Italy has got one and also Murlo. It’s the kind of place we were looking for; good short espresso and locals doing… what they do every day… stay at the bar! Angelo asks for a picture and everybody really enjoys the idea. Without moving a finger they find the ideal position in the portrait. It’s a kind of exchange: we have the picture and they have an argument for next twelve months. We can look forward to the next edition to enjoy another moment with this peaceful and nice company. 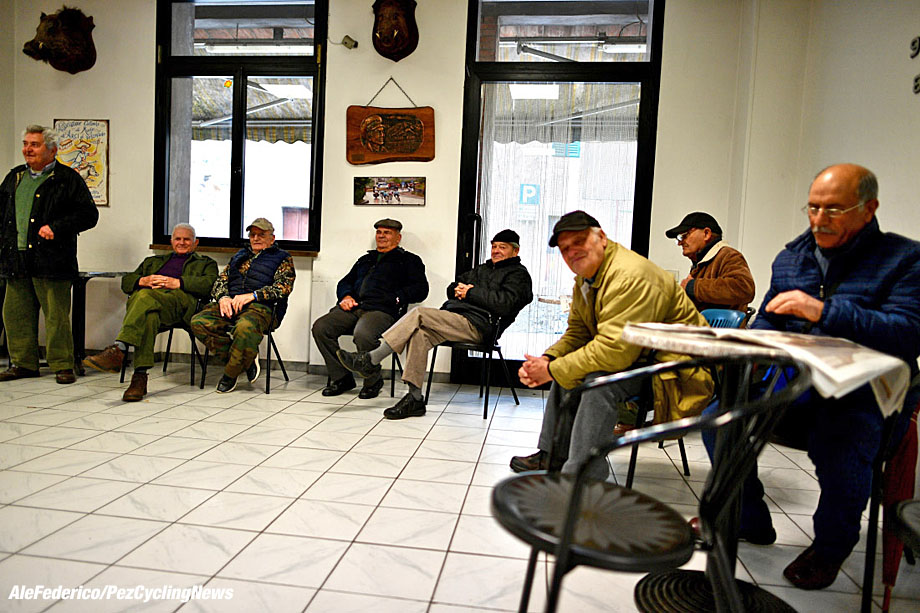 One of the most recommended bar in Italy: Murlo’s – The coffee is excellent 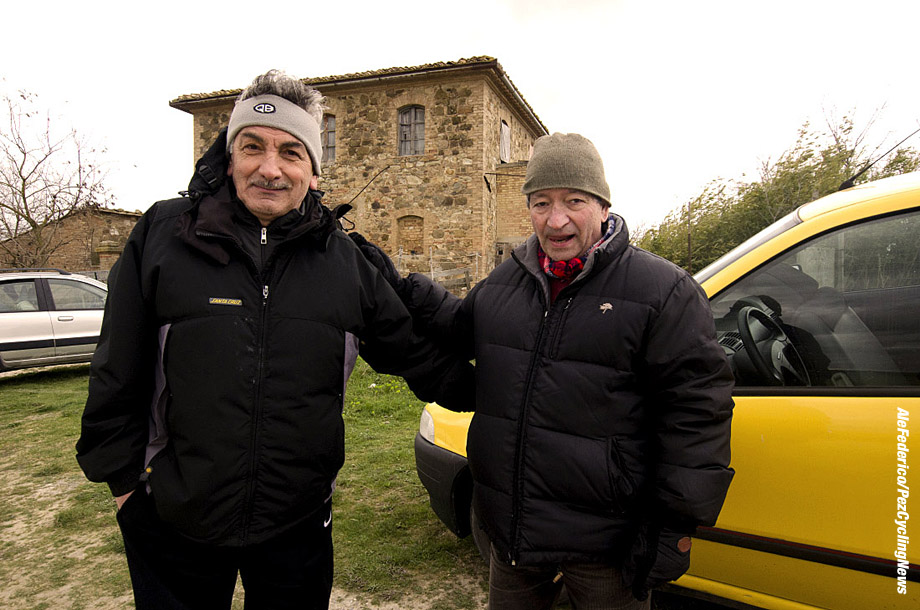 Our two new friends – Will we meet them next year?

The dust and the wind
Forecast is for rain, the sky is getting worse but the wind blows stronger now in Buonconvento and instead of the expected mud we have a lot of dust. We are quite the experts of the race now and we choose the windward side to avoid the cameras and ourselves being covered with dust (or white mud, today) after the race passage. Again the race comes and goes and we again follow it to join another sector of gravel in the first part of the race. We reach the southern point of our trip in Lucignano d’Asso but the wind here is stronger than ever. We can barely walk safely without crashing with all our gear and we ask how the riders will be able to ride here. Only two other guys are waiting for the race to pass at this point and they ask us what is happening in the race. These two guys are so kind and friendly that they offer us a glass of red and a panino. Angelo doesn’t drink, but I accept and I could spend part of the story to tell you how good the wine was. The race arrives faster than expected and the breakaway with Pinot is increasing the gap to over five minutes, but Lotto Soudal is clearly organizing the battle in this tricky sector of gravel, which so exposed to the wind. When we leave the two guys with the wine, we fix our next meeting for next year – “next time we will organize a grill” – they promise, hoping for better weather. 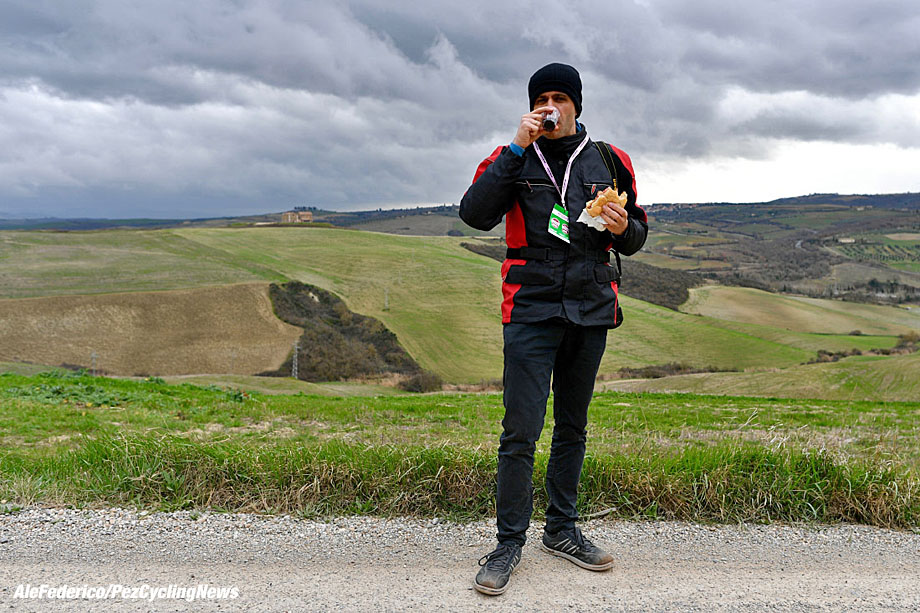 Oh yeah. The red and the panino time! 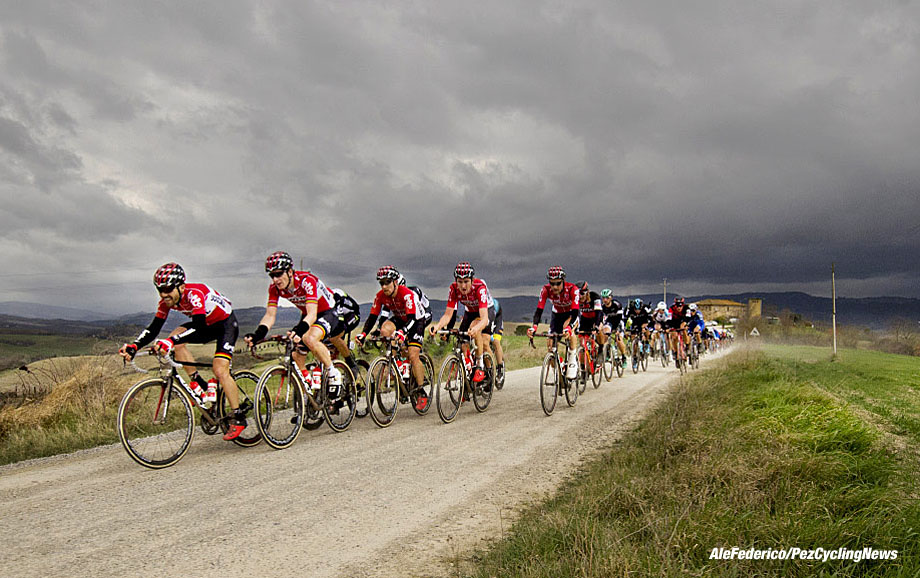 Lotto Soudal preparing some kind of attack in the wind

The wind (part 2) and the rain
While we head north the wind decreases a bit, but not that much to become comfortable, however it’s not good news because with less resistance the rain starts to fall. In Buonconvento it is raining quite strongly and in Monteroni a little bit less. We climb up to San Martino and some pieces of the road are already dark. However we can’t see mud but we immediately understand that the race will change soon. Unfortunately the rain increases while the breakaway approaches. They are five and they are exhausted, the pursuit is still led by Lotto but the bunch has been reduced to a maximum of 15 riders. Our excitement starts to rise because we understand the race has already exploded and we can’t wait for the moment when it will be at the top of the final climb to Siena. 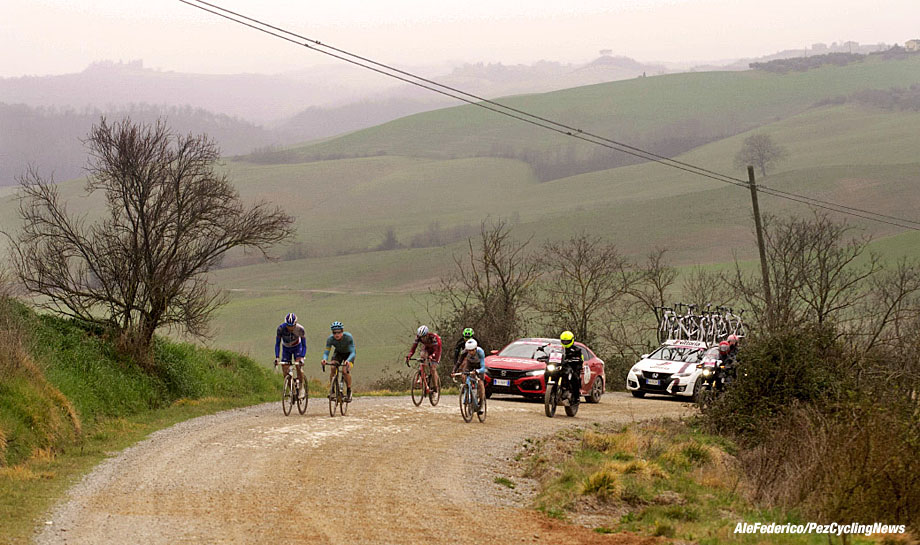 Siena we come
We still have two more passages to enjoy: Monteaperti and Siena. Neither are on gravel, but very exciting. Usually the race is decided by Monteaperti and in fact we can already recognize the head of the race for the final. Dumoulin, Van Avermaet, Stybar, Kwiat and still Pinot are now pushing hard to reach Siena. We also have to move a bit faster than other passage, but we feel perfectly in control of “our” shortcuts, despite the road being a bit wet. We arrive in Siena, it feels just like a few days since the last time we were here to see the race pass, but another year has come and gone. While we climb the narrow road we look at all the faces of the tifosi who had been waiting for hours for the race. We feel privileged for the fact that we just watch it and we sit. Kwiat is solo ahead by half a minute. He comes, we can see him down below, two hundred meter away from us, climbing strong. He is in control, he will win easily. Our feeling at that moment is so without control that the hands shake, the heart races and it’s a bit difficult to recall all the sensations we were living through. Once the race passes we feel like returning home after a long voyage. Exhausted. 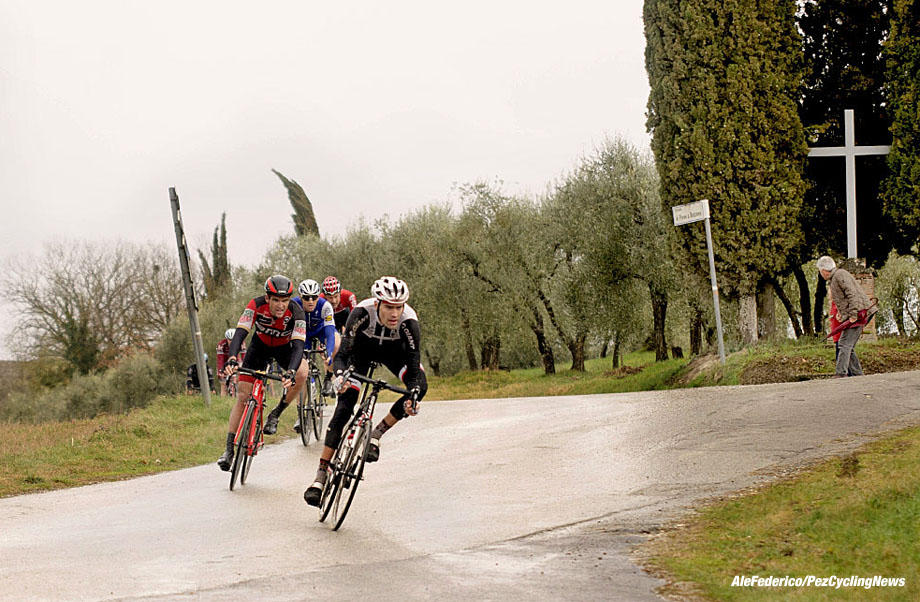 Dumoulin, Van Avermaet, Stybar and Wellens heading to the final at speed

All riders one by one pass through and we have a picture of all of them, especially the last, but my favorite is for the young Norwegian Truls Korsaeth, 23 years old, in the break all the day long and 20th at the end. I don’t know whether one day he will ride for a win and I also don’t care. He was great today! 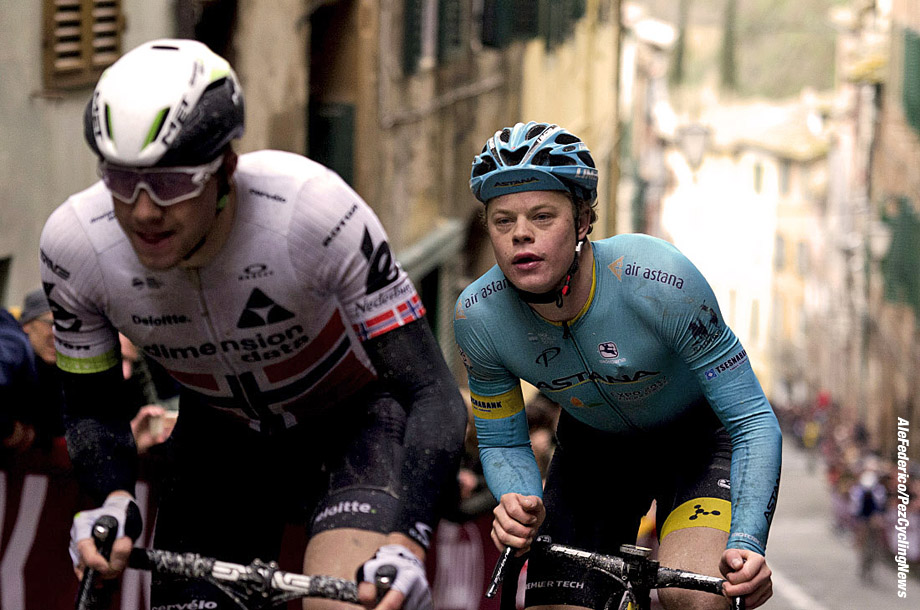 Truls Korsaeth on the final climb after the long breakaway

Keep it PEZ for the 2020 Strade Bianche race report on Saturday and all the news in EUROTRASH Monday.

# You can see more of Ale’s photos on his Instagram page HERE. #