All eyes are on the streets of San Francisco for the final big event of the U.S. season. Now if you’re a cycling junkie like we all are here at Pez, you’ve probably spent numerous daydreaming hours during your local rides thinking “Hmmm, this would be an awesome race course.” If you’re a cycling junkie named Dan Osipow and help to manage the Postal team and Tailwind Sports, you can actually work to turn your backyard into arguably the best one-day event in North America. We spoke to Dan about the design of the course, then took to the streets to tackle it ourselves.

Dan’s Plan
“A lot of thought went into the design for a handful of reasons – great hills, great neighborhoods, opportunity for fan support and – in particular – safety. With so many great hills to consider, the most important piece to the puzzle was the downhill – how steep, how safe and of course are there any trolley tracks to consider.

”Being a North Beach resident, I went ahead and thought about a race in that part of town that would hit other great areas of interest. The former mayor encouraged us to hold the start/finish area by the Ferry Building, as the construction was taking place for a new and better building and surrounding area, and here in SF, that spot is somewhat the heart of the city with ferry boats landing there, the new trolley service opening, near Justin Herman Plaza, which would be perfect for the expo, etc. 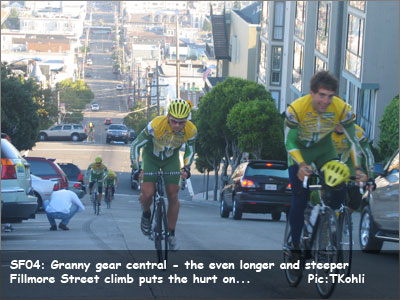 ”The most natural hill to bring into the course was Fillmore, for its steepness and for its appeal to all San Franciscans. Most have either jogged, walked, drove, ridden up the hill and all know just how steep it is. Plus, the downhill we selected down Broadway is long and safe and not too steep. The other major hill, Taylor, was easier to find, as a few streets around that hill were too steep to consider.

”For the overall loop, a 10 or so mile loop would be best for the race and the spectators in terms of the timing of each lap, so the fans wouldn’t have to wait around too long before seeing the group again. The inclusion of North Beach, a bit of Pacific Heights, the Marina – it all made sense to try and make the best race course in San Francisco.”

Early one morning this past week, McGuire Real Estate CEO and category
4 racer Charlie Moore joined his McGuire women’s and men’s squads to scout the course. The course’s start and finish is along The Embarcadero, a thoroughfare lined with public art, palm trees, and a clear view of the course – making it an ideal setting for the planned start/finish area and VIP tents, and for the 1.3-mile parade laps that open the event. The green- and yellow-clad squad rolled easy along the first part of the 8.8 mile main course loop that skirts touristy Fisherman’s Wharf and the historic army Presidio. 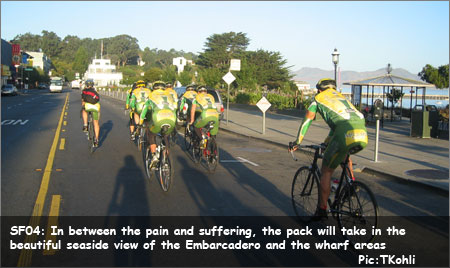 No easy riding was possible for the most challenging part of the course in the well-to do Pacific Heights district, however. After turning from Greenwich, the McGuire squad breathed heavily as they climbed up Fillmore, featuring a final two blocks with nearly 18% grade. Bikes were swung back and forth, and bodies were poised far over the front wheel for balance. The men are to complete this climb nine times, and the women five. At the top, a left turn onto Broadway brought a descent that quickly separated those who reached the top from those strung out on the climb behind. After carefully negotiating trolley tracks in Italian North Beach district, the ascent of Taylor Street hill begins, a two-block power climb of over 13% grade which is not only present in each 8.8 mile loop, but also featured in the closing five mile circuit. 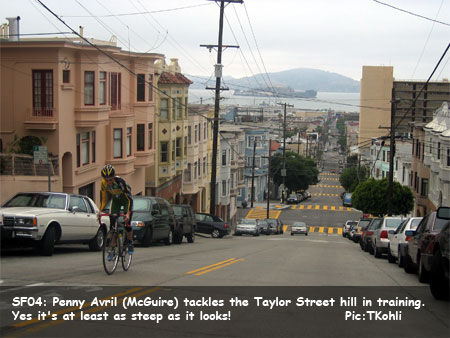 Upon finishing the pre-ride, McGuire women’s team race leader Penny Avril commented, “This course is technical, so there’s not a lot of room for recovery. If we’re not climbing or descending, we have to look out for many corners, trolley tracks, manhole covers, and uneven pavement.” Veteran Dave McCook, a member of the men’s squad, said that the men’s team would sport at least a 27 rear cassette. Overall, the race is 108 miles for the men and just under 52 miles for the women.

Riders to Watch
From a city famous for its hills, one should expect a no less challenging course. It has attracted start list that reads like a Who’s Who of cycling. Lance Armstrong is bringing the Postal “A” team, (minus Vuelta guys Floyd Landis and Manuel Beltran, but adding Mike Creed!). Postie George Hincapie won the Grand Prix in 2001, after help from his boss Lance to bridge to a break gave him the freshest legs in the front group. Webcor is a contender with two past winners in their ranks: Charles Dionne, winner in 2002, and Chris Horner, who took a decisive win in 2003 in a solo breakaway.

Adding international spice to the mix are the Acqua & Sapone, Phonak (without Tyler, who is also at the Vuelta), Saeco, and Domina Vacanze squads. 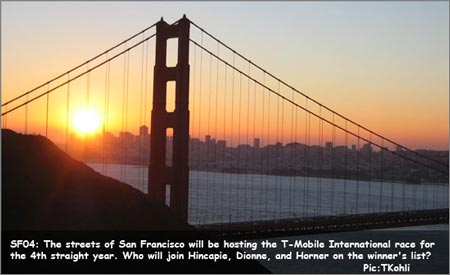 The women’s race is likely to be equally competitive. Local Christine Thorburn, re-united with her Bay Area Webcor squad after placing fourth in the Olympic Time Trial, is a favorite. Team T-Mobile’s US national champion Kristin Armstrong and 2004 Olympic Silver medalist Dede Demet will be looking to please their sponsor. The woman everyone will be marking, however, is 2003 winner Nicole Cooke. Any doubts about Cooke’s form after eight months away from racing due to a knee injury were erased after her G.C. win of the women’s Giro Donne stage race and her 5th place at the Olympic road race.

The tough T-Mobile International is the grand finale event of the US Pro Cycling Tour’s 2004 road race series. Look for points leaders Fred Rodriguez and Gina Grain to defend their placing here, a tall order in a race of attrition that last year saw only 54 of approximately 150 starters finish in the men’s field and only 67 of about 145 starters crossing the line in the women’s race.

Pez will be out in force in San Francisco to take in the sights and give you the scoop on the race and the Hammerhead’s Ball Friday Night, so see ya there!

La Vuelta Stg 5: The Beast From The East Roars!