Without doubt the fastest growing facet of cycling has to be the Grand Fondo. They cater for all categories, age groups and levels of fitness, just look at how many people have been brought into cycling at maybe its worst time for bad publicity in the professional ranks, over the last 10 years. Joshua Liberles and Greg Lee recently savored the Oregon Triple Crown based in Cottage Grove. Here is what they found out:

The Oregon Gran Fondo, part of the Oregon Triple Crown series, returned for its fourth edition, winding its way west of the town of Cottage Grove, Oregon, through the Siuslaw and Smith River forests, and along some of the best roads many of the participants had ever encountered. The distance – 117 miles – represents the primary challenge, although the 6,700 vertical feet contribute, too. There are shorter options – the 71-mile Medio and 25-mile Piccolo routes – as well. 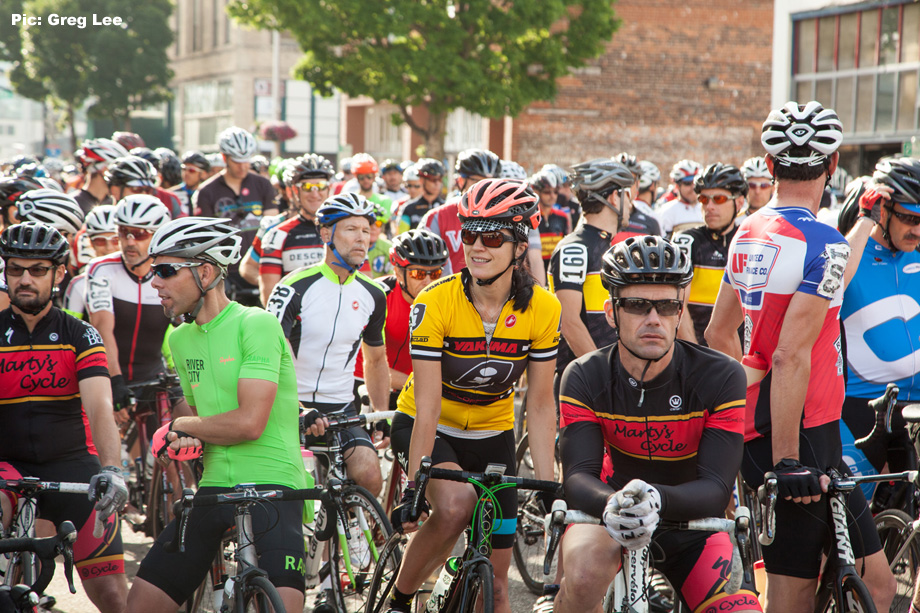 Cottage Grove has a population of about 10,000 people, which, amazingly, is enough to make it Lane County’s third largest community. The town’s most famous as the setting for the train scenes of Buster Keaton’s The General, and Stand by Me, and the parade scenes from Animal House. The city of Eugene is more than 15 times its size, but is 23 miles due north. We were heading west onto tiny roads, where we’d encounter perhaps a dozen cars in the next five-and-a-half hours.

The gorgeous Village Green Resort, where fondo riders could decompress on 14 idyllic acres, served as the official event accommodations. Dirtbags like us could also opt for free camping at Bohemia park, right in the center of town. 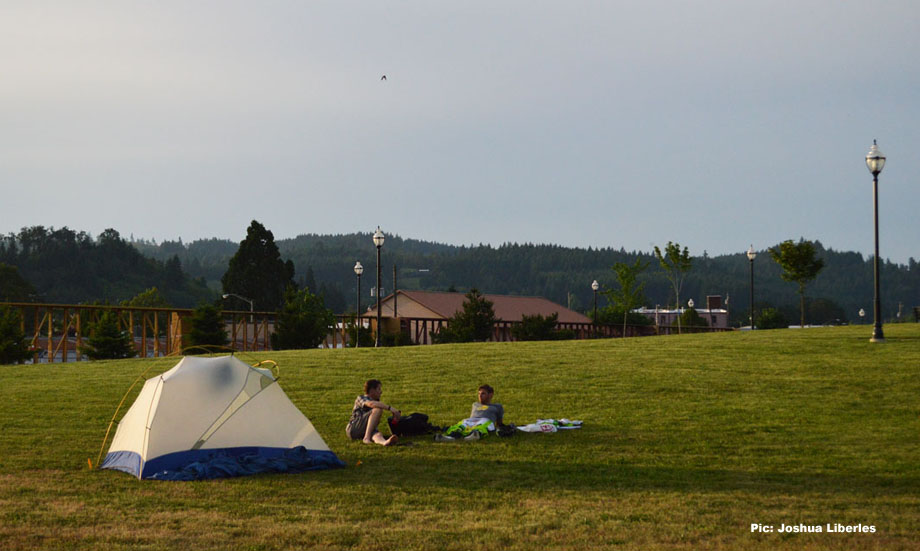 Ripley’s Oregon Triple Crown
Mike Ripley took the helm of the Oregon Gran Fondo and the grueling, justifiably titled Oregon Coast Gravel Epic, coming up on September 26th, this year, adding them to his Willamette Gran Fondo (August 2nd). Each ride has been around three or four years, and they’ve grown by 20 percent each year. The three courses also form a geographic triangle, bringing a lot of well-deserved attention to an area that’s a cyclist’s paradise. 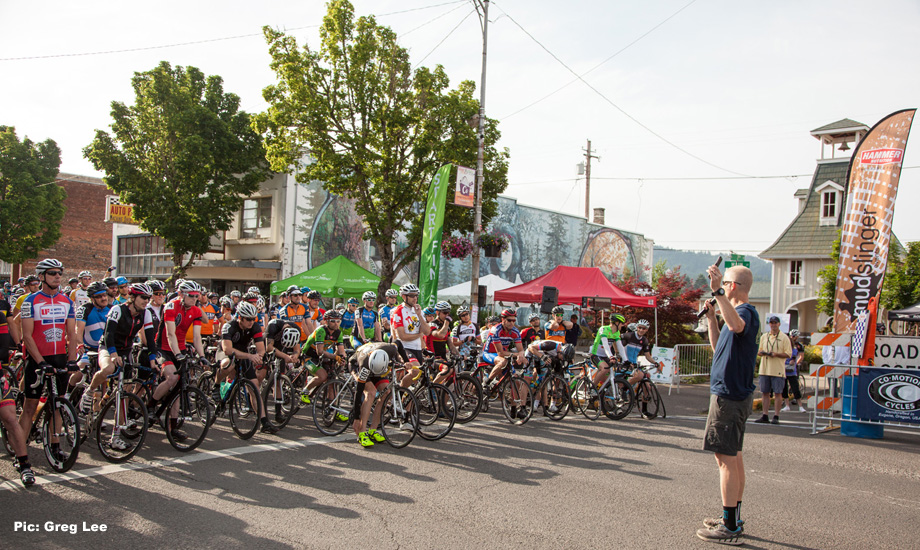 The three-event series has an overall purse totaling $2,500 for the top four men and top three women, in addition to individual stage prizes. The Oregon Gran Fondo offers a trophy and prize for best man and best woman, a mid-course KOM and QOM award, as well as a best-team prize. 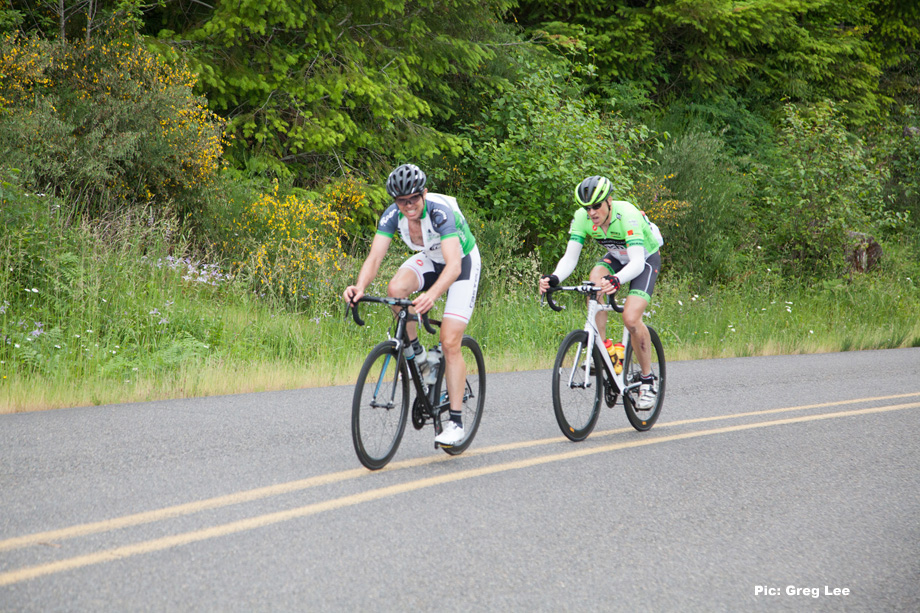 Ripley has promoted notable mountain, road and stage races all over the state, including the High Cascades 100 and Oregon 12/24-hour MTB race. He’s a huge – both literally and figuratively; the former basketball player towers – advocate of trail work and cycling in general, and he loves to help people to be active and to experience nature. Seeing 12-year-old kids take a midnight lap in his 24-hour team relay MTB race is one of his most gratifying experience as a promoter, as he tells me. Fondos were a logical step – bringing a well-run, challenging cycling experience to the masses, and providing a rare opportunity to provide a supported setting for those looking to push the pace for the distance. 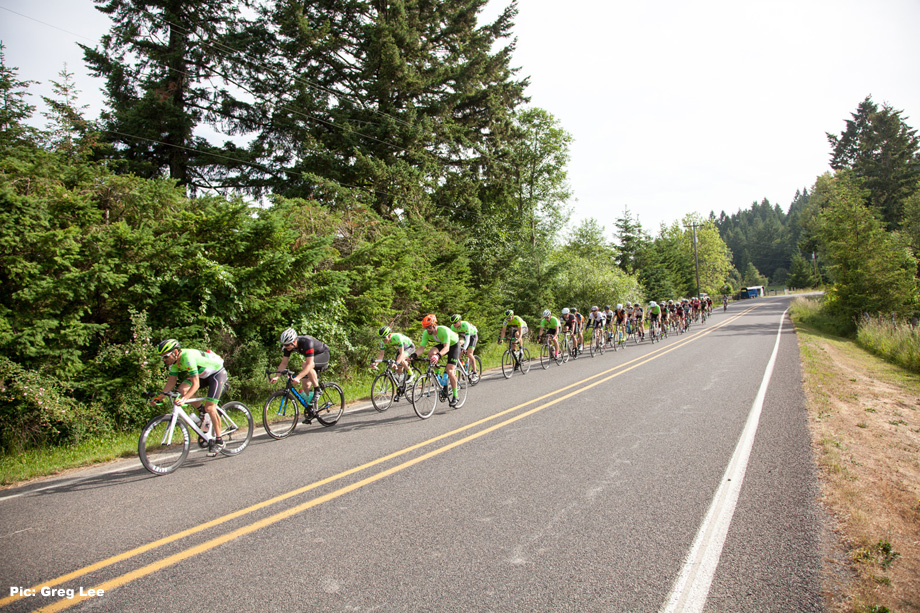 Fondo Fun Times. And, Are We Racing?
Gran fondos occupy a hard-to-define space in the cycling world. Are they social fun-ride tours? Are they races? Maybe a challenging, high-paced group training ride through beautiful countryside? The answer in most cases – and the Oregon Gran Fondo was no exception – is: a bit of all of the above. 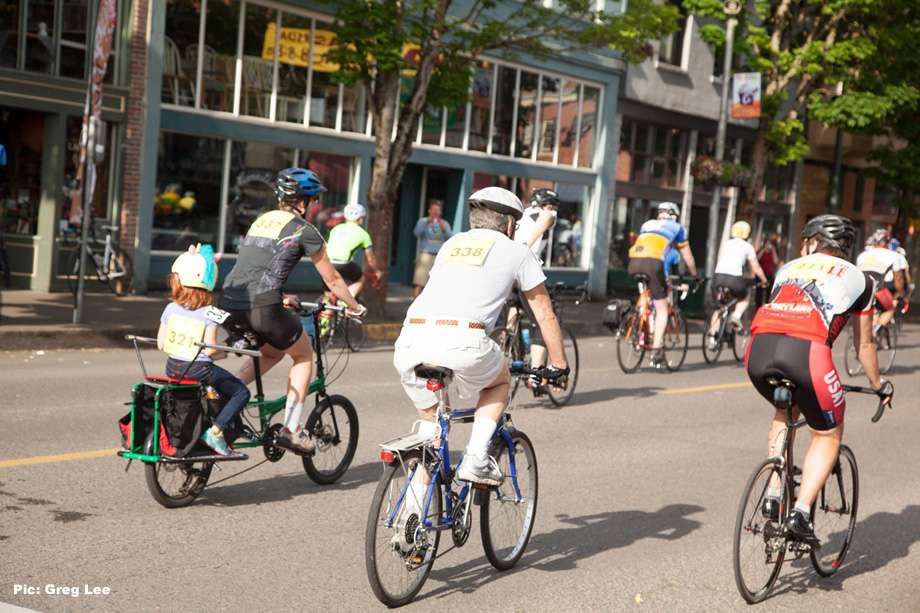 In Europe, the bigger fondi can lure thousands, with riders ranging from cyclo-tourists enjoying panini along the route to disgraced dopers looking collect on the hefty payouts. The Oregon renditions are a lot more relaxed It’s racy, for sure, but there are periodic rest stops stocked with snacks and drinks so, at the very least, you don’t have to pack six water bottles and 3,000 calories – although there were those with CamelBaks. And that means that you can either set out to ride your own pace from the get-go or, should the lead group prove a bit much on any given day, you can always revert to a snack-filled, social Plan B at any time.

And a big party awaits at the finish line, regardless of how quickly you get there. A meal and a beverage (beer/wine/cider included) come with the events, and there’s plenty more for purchase. 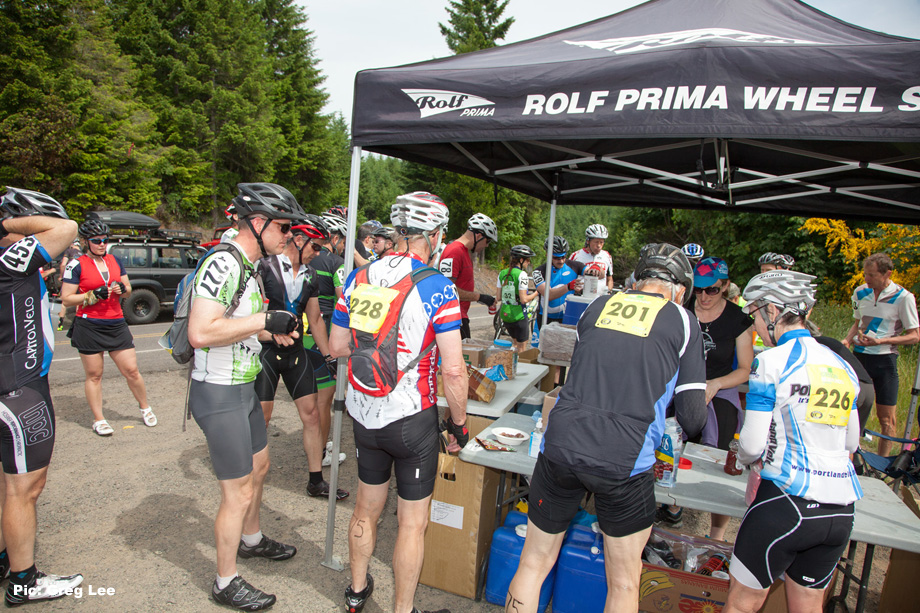 It was relatively early in my cycling career, at the Enchanted Circle Century outside of Taos, New Mexico, that the true answer to the question, “is this a race,” surfaced. Promoter Dave Mount announced through a bullhorn to the crowd at the start line that it “wasn’t a race.” Many audibly chuckled. Former U.S. Pro road race national champ Bart Bowen and some other notables were among those ready to launch the pack careening off into orbit. And one racer adroitly fired back, “Any time you have more than two people, a finish line, and a timing clock, it’s a race.” So, there you have it. 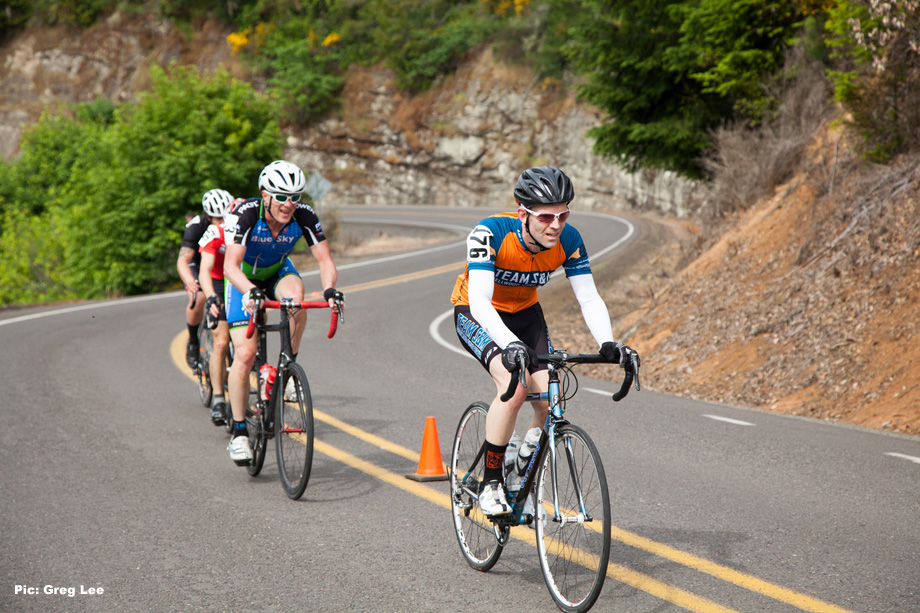 In true fondo spirit, the Oregon event was a mass start for all 400+ participants. There was no separation by race category, only a vague recognition of past finishing times – those folks got preferential position – and then a strong encouragement to self-select from there to keep the pack relatively safe. One obvious difference from regular road races was the presence of tandems, and there were at least a couple co-ed duos with the chops to motor along at the front on the flats, and to keep close enough on the climbs to re-emerge a couple more times during the ride before getting dislodged from the front group for good. 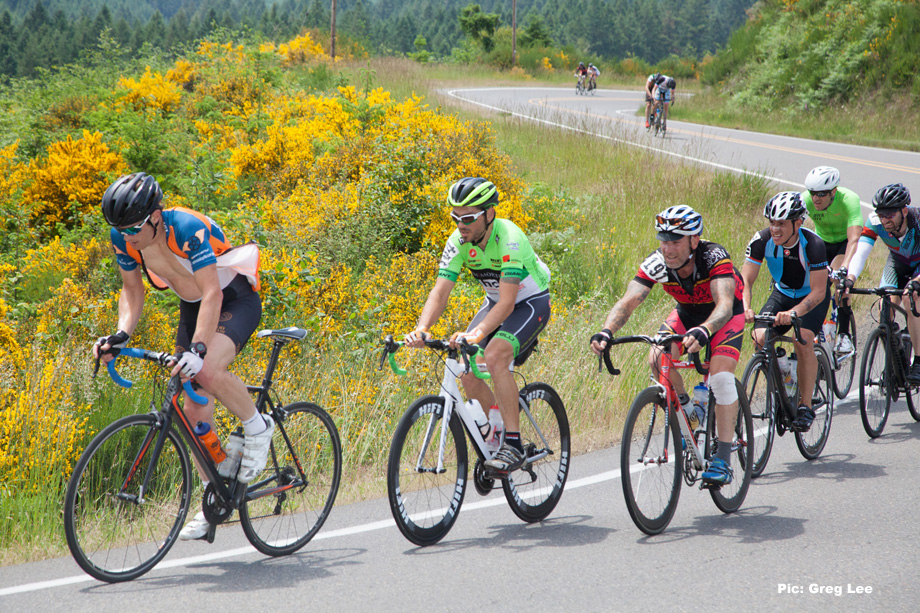 My four-man team – Hosmer Chiropractic-RPM Mortgage, from Portland – was definitely treating the event both as a competition and an opportunity to put in a sizable training load. Chris Bagg and I had raced in the OBRA team time trial championship the day before, so we started with some achy legs. David Kuhns and Galen Mittermann rounded out our quartet. 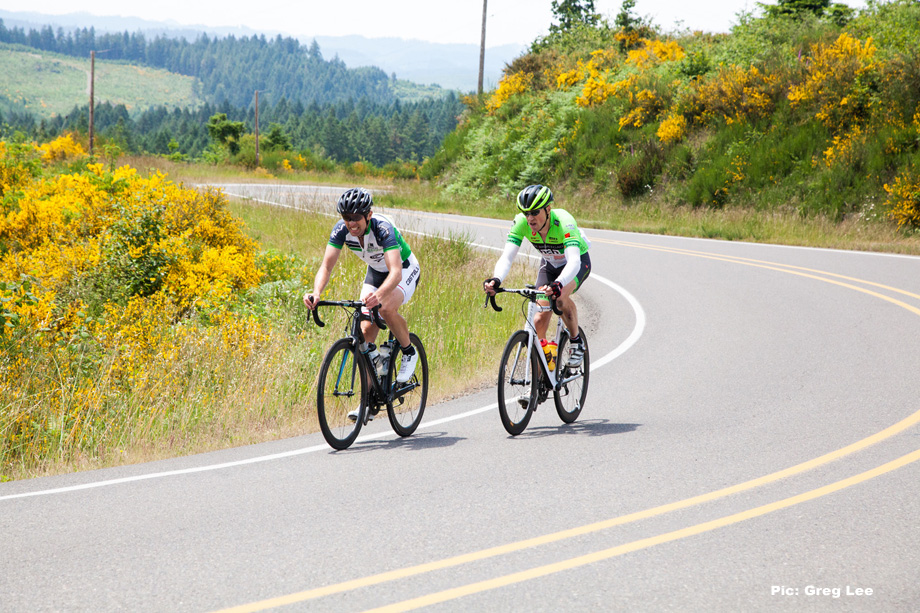 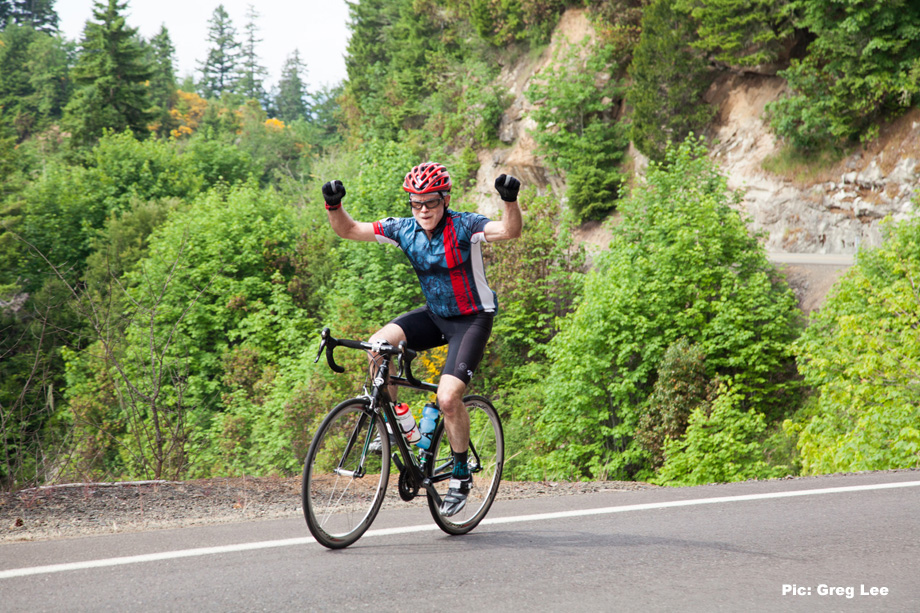 Ahead awaited 117 miles of glorious pedaling, mostly on tiny back roads. The 6,500-some-odd feet of elevation gain came mostly in three clumps – hills that were long enough to gradually slough off some riders, or encourage folks to reconsider their approach and call it a “fun training ride”, but not sufficient to cause a true sorting out. 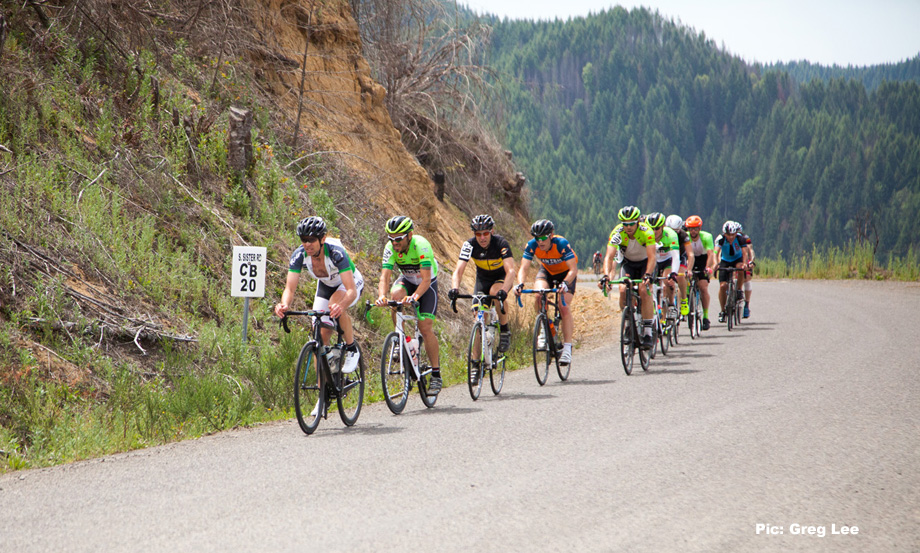 Seth Patla (Rapha-River City) tested the waters with an early attack, about 15 miles into the day on a gentle rise. He hovered ahead for a bit before a Team Oregon rider decided to bridge. As Patla later told me, Mr. Team O dutifully pulled through, then promptly and dramatically imploded and dropped himself on the very next rise. Patla wasn’t exactly planning to try to solo the entire race, but he gritted his teeth, got in the drops, and set off. It would be hours before we’d see him again. 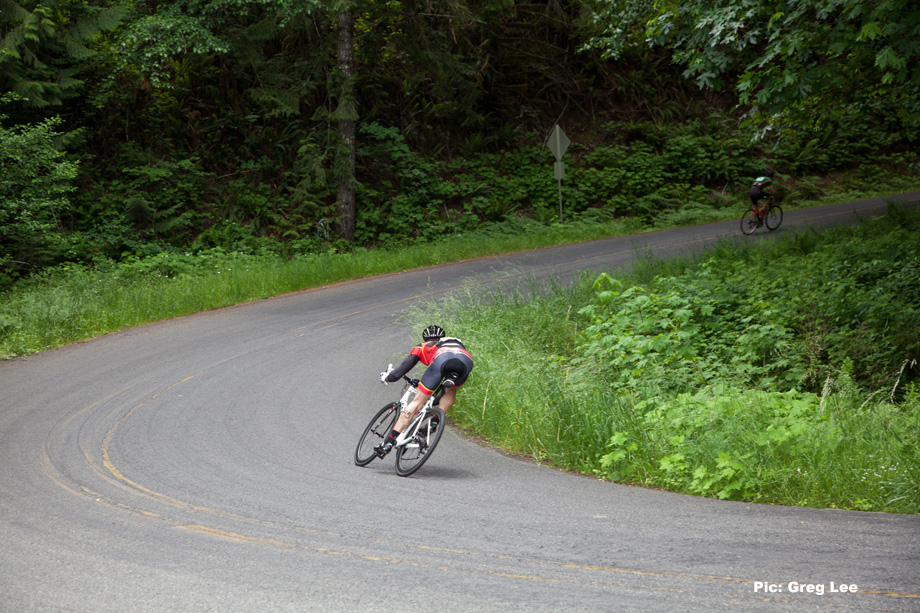 The longest climb comes 26 miles into the day, rising about 1,000 feet in 4.5 miles. A group of 10-12, including all four of my team members, had distanced the rest, but the following, seemingly endless, fantastic, twisty, mostly descending false flat that lasts a full 35 miles was more than enough time for a bunch of folks to rejoin. Somewhere along that stretch the group decided to pit and refuel at rest area #2, and a frenzy of water bottle filling and snack grabbing ensued, and the peloton swelled further to a huge group. And the tandems were back. 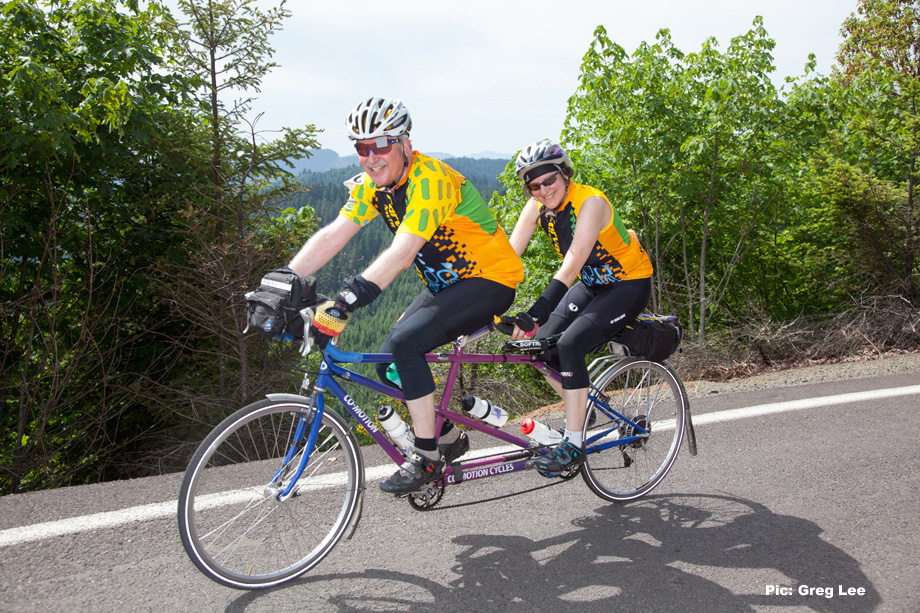 Two riders who opted to skip out on the pack’s agreed-to refueling stop made it up to Patla, but they all would return to the fold not long after. The Rapha-River City rider spent about 60 miles off the front, alone for almost all of that time. Of course he’d pay dearly for that effort, but without reservation he won “man of the match” honors. 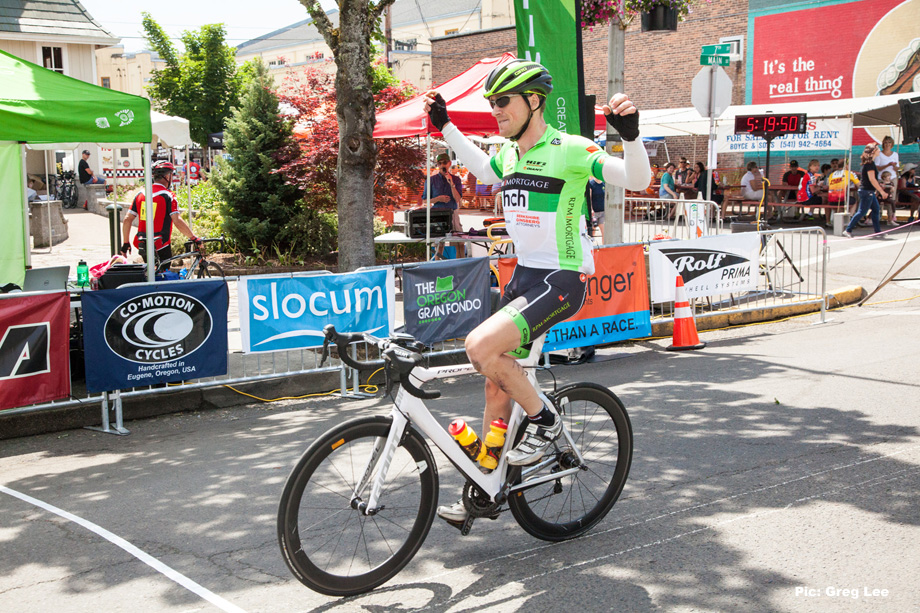 I won’t bore you with details of the rest of the race. Suffice to say we attacked lots on the remaining hills, and managed to get Mittermann across the line in first, solo and with a big gap over his breakaway mate, Larry Jackson, Bagg (Hosmer Chiro-RPM Mortgage), Ray Fiori (Team Dirt), and David DiMarco (Hutch’s-Slocum-Co-Motion) rounded out the podium. I was second in the next group, in ninth. Fun ride or training race? Whatever it was, it was nice we won it. 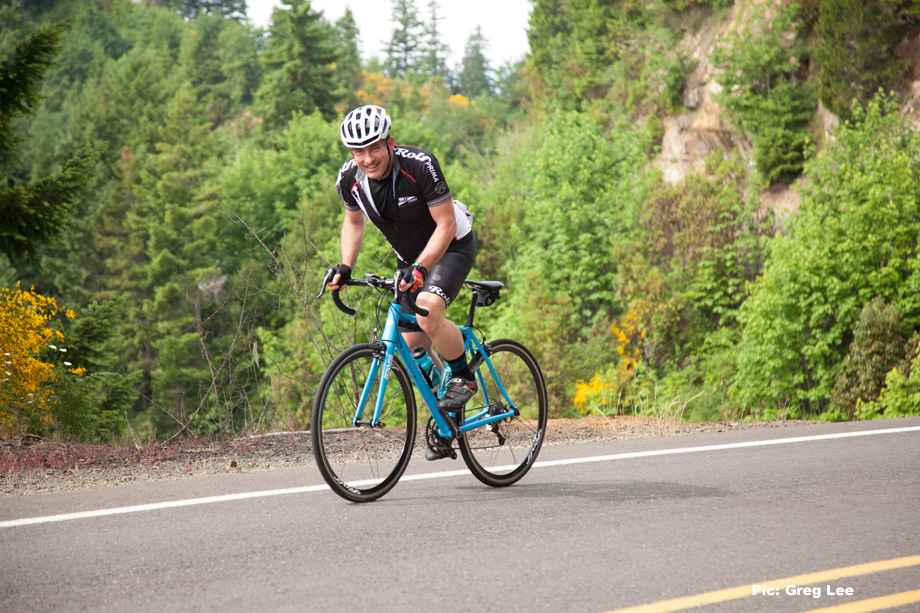 Misha Fuller of Eugene took home top honors for the women, and she beat most of the men, too. Cristina Mihaescu (Olympia Cycling) was next, followed by Clara Terrell. 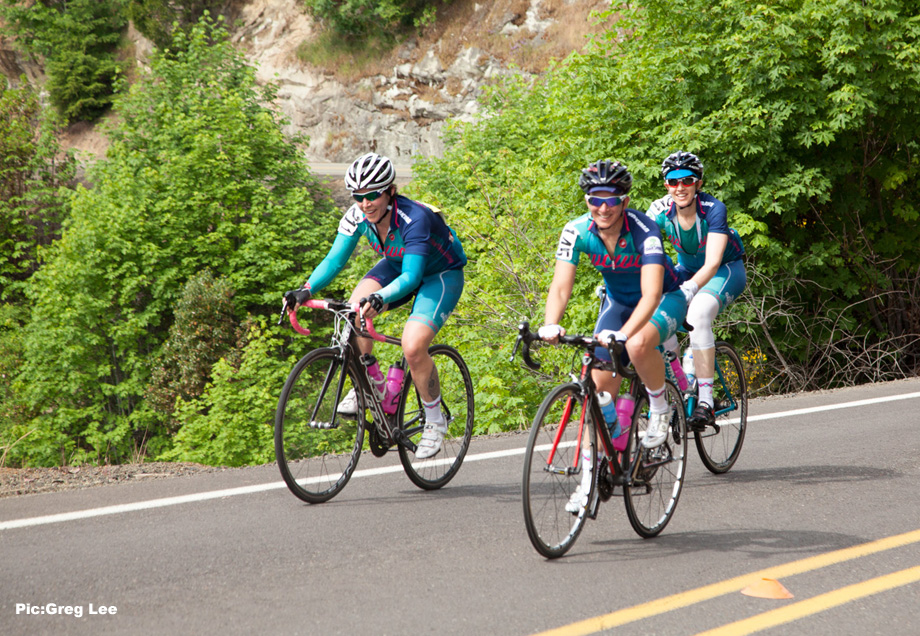 Looking Ahead, and Book Your Rides
The Oregon Gran Fondo and the other Triple Crown events have room for growth – but not all that much. Ripley estimates that his long courses can comfortably hold another 100 to 200 people total. So mark the dates and start training – these fantastic routes and events are well worth the trip. See you in Philomath! 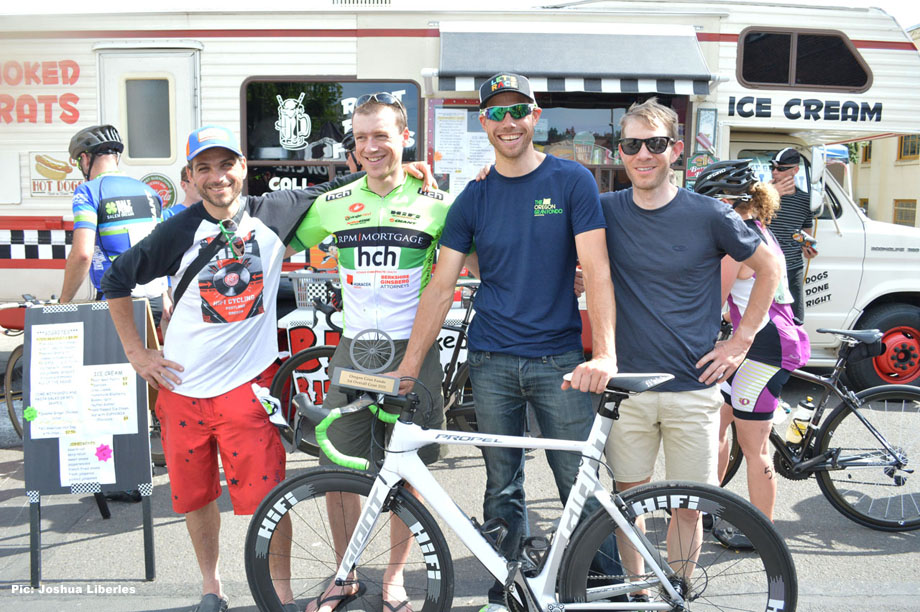