There are some requests in life that you simply can’t refuse, and the text message I got last week from a cycling buddy was one of them – how would I like to get into the Tour de France Peloton, was all it said, so it took me all of 2 seconds to reply of course I would – no questions… already sensing a wind up.

Well, although not quite what I’d hoped, it was kind of true, because what was actually being offered was the opportunity to feature in next year’s TdF promo video… not quite the real thing but one for the “blaggers’ palmares. The organisers, TFL, of next year’s Grand depart were filming in London the coming weekend and were after a “pseudo peloton” to feature in it with some of the capital’s great landmarks for its backdrop. How could I refuse an opportunity like that? 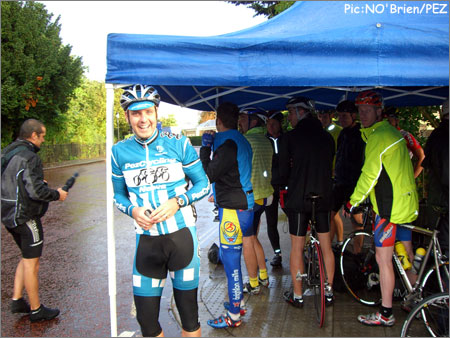 The Glamour of the film industry… you try making a wet September look like a warm July.

The director apparently had requested no overweight riders to make it more convincing, so it was with trepidation that I found myself riding into Regents Park on a very wet Saturday morning to find a shivering gaggle of wannabe George “Clooney-Hincapies” clad in Lycra hunched around the film crew. It was not looking very convincing, but gradually the weather cleared and as more London cycling ‘faces’ appeared the order was given for the bunch to begin to circle the park, (Regents Park has a ring road of around 2km that is rumoured to be the finish of the 2012 Olympic Road Race) Each ‘lap’ we would have instructions shouted up from the camera men as they tried different angles, and ever so gradually each lap got a little faster until after half an hour we had a near race situation with early morning joggers being sent flying by 50 odd cyclists tearing round trying to win the sprint for the camera each time round. 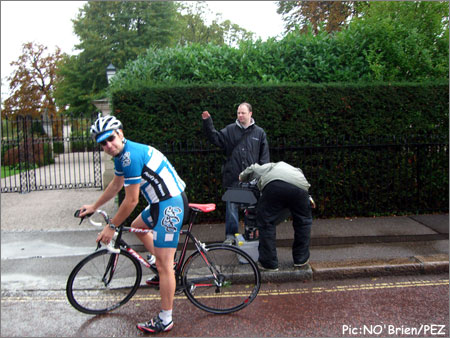 “I reckon, if we just get the angle right we can make this lardy boy look like Bettini.”

On one lap the camera was positioned low in the left hand gutter for the classic ‘whirring’ legs shot. I’ve never witnessed such evil switching as the riders cut in front of each other mercilessly just so as they could freeze frame later to point out their legs flying past. However, the atmosphere was fun and with one rider selected to be the yellow jersey there was lots of micky taking especially as he had to stay on the front constantly in what was becoming a high tempo training ride.

The video is to premier at the announcement later this month of the Tour route and will be broadcast globally off the back of that, so we all realised we were doing something useful for the Grand Depart organisers ‘Transport for London’ and hoped to do our little bit to make it a storming success next year. What we didn’t realise was that Regents Park is a dog walkers heaven so as the frisky Labrador bounded into the pack bringing half a dozen guys down the quest for authenticity seemed to stretch too far – especially as it turned out the dog’s owner was a Belgium tourist, no doubt still reeling from his team’s Worlds failure the week before. 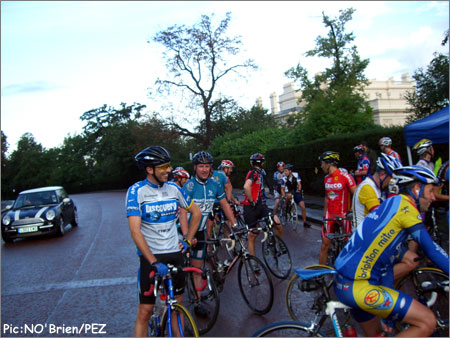 Forget about the Ekimov look-a-like in the Discovery jersey – that’s Sir Michael Caine flying past in the Mini, honest guv.

Anyway the camera kept rolling as the luvvies say and they also filmed the remounted bunch with the young girl star of the story – who without giving to much away… is visiting london with her family in the style of the 60s french cult film ‘The Red Balloon’ following a (guess the colour?) balloon around town until eventually it floats past the race… but you’ll have to wait and see and if you look hard enough you might just see yours truly in his Pez kit trying to show his best side. 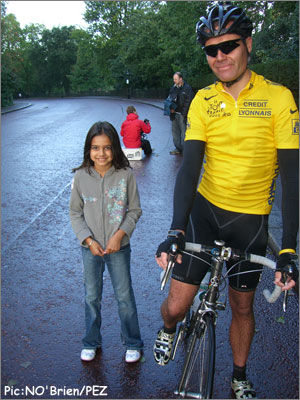 The two stars of the show coming to a yellow screen near you soon (and probably the first maillot jaune to have hairier legs than the great portugese Joachim Agosthino!). 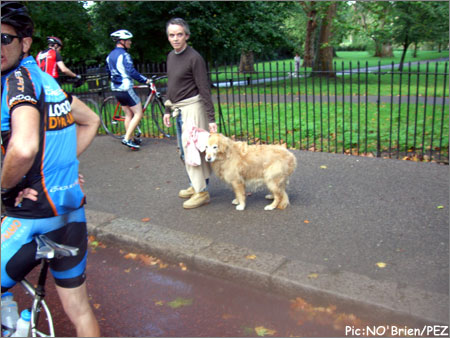 Say hello to cutie Boonen the Belgium Labrador that ripped the bunch apart.