The ASO rolled out the red carpet in Paris this morning at the Palais des Congrиs to honor the 2009 Tour de France and to announce the 2010 route. The Tour’s who’s who were all there, from star riders past and present, to the ASO, UCI, host cities and countries, sponsors and press, and of course PEZ – ! Here’s our first look at the festivities. 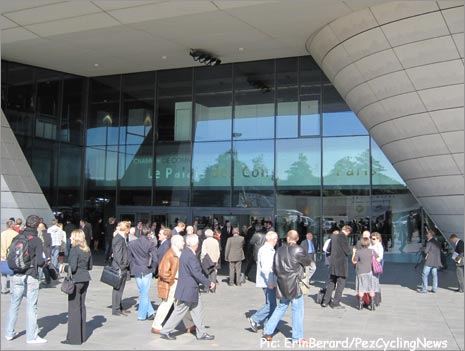 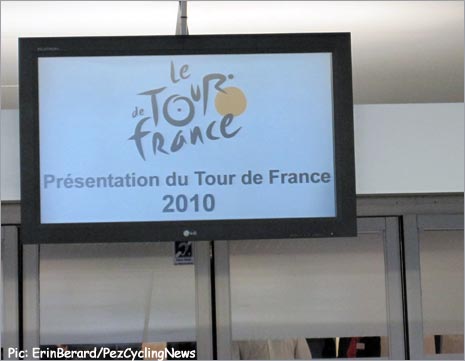 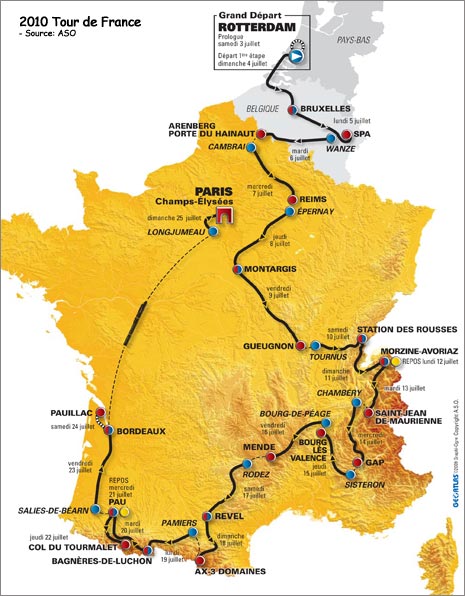 There was definitely a “feel good” ambience to today’s presentation, including a nod to the glorious heritage of mountains in the Tour de France, and energy was high in the room. Christian Prudhomme admitted that even he got goose bumps at this event each year. 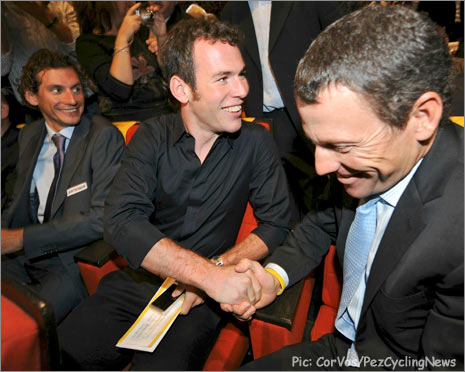 I had a few minutes to speak with Christophe Moreau who arrived with his wife who is expecting and met up with Stйphane Augй of Confidis. Christophe was excited to learn about the route. I spoke with David Deroo from Skil-Shimano, originally from Sailly-lez-Lanney near Roubaix, who was excited about the rumor that there would be a stage of pavйs! “I’m used to it, they’re in my neighborhood.” 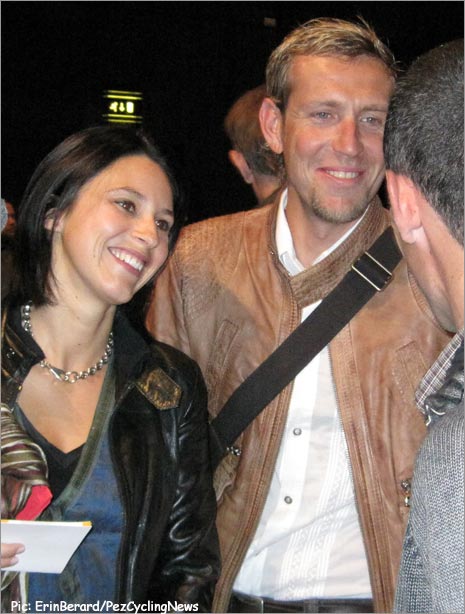 After an initial paparazzi frenzy around Lance, Schleck, and Contador (really it was all about Lance) down in the front of the auditorium, worthy of Oscar night in Hollywood, Jean-Etienne Amaury, the President of the ASO, got thing started off with a warm welcome. 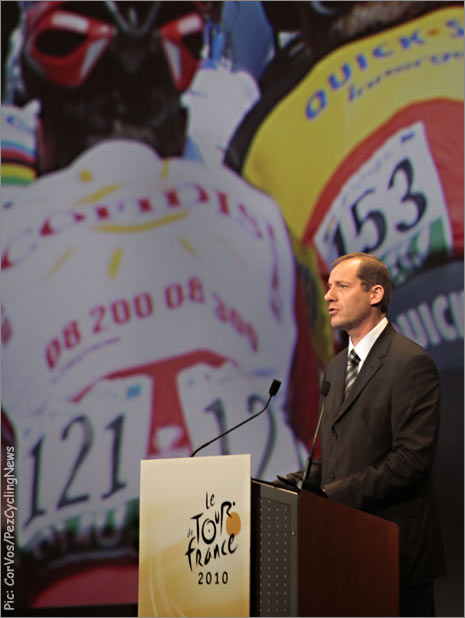 He spoke of the ASO’s firm stance on doping and its center at the continued dialogue and relationship with the UCI, after which he acknowledged Pat McQuaid in the audience. He continued on to lighter topics when he set the stage for the film recap of the 2009: “The Tour de France is at the heart of French happiness.” For the next 10 minutes, we were treated to the highlights of last year’s Tour. The scene opens with the sound of cicadas and lavender fields of Provence. Then came shots of Lance, Contador, and the two of them hugging. Did I say “feel good” earlier?

The film went on to focus on the global audience of the Tour with live footage of international fans along the roadsides, including Contador’s mom and dad at a stage finish. More hugs. The French heroes of last year – Brice Feillu and Thomas Voekler stage victories were highlighted as well as some of the bad moments such as Jens Voigt’s horrific crash. 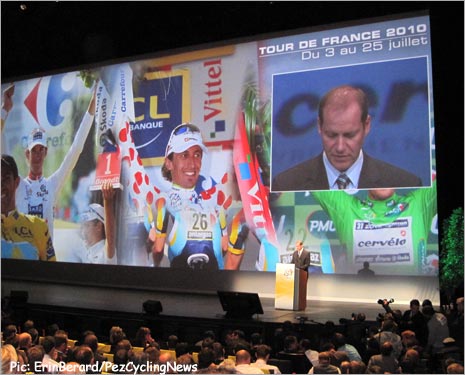 Up next came Christian Prudhomme who acknowledged the Tour’s early start from a newspaper to today being broadcast in high-definition television to millions. (Watch out for 3DTV broadcasts as they were testing 3D cameras at Paris-Tours recently.)

He introduced 1910 and this year’s Tour honoring the “Centenaire des Pyrenйes” or 100 years in the Pyrenees. Behind the podium appeared the famous TDF map as a large rock depicting the lunar like “sommets” of the hallowed Pyrenean mountain top finishes. Not surprising that indeed, the Tour slogan this year is “Les Йternelle Quкte des Sommets.” 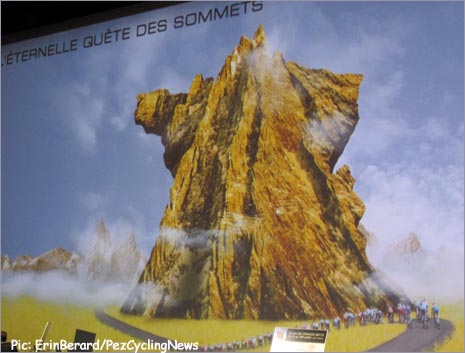 Next we were treated to a special black and white film starring Eugиne Christophe. Christian was right; we all will remember this man’s name. A pro from 1904 to 1926, he became the first rider to ever wear le maillot jaune in 1919. He rode 11 Tours and finished 8. His ultimate claim to fame is that he had to weld his own bicycle together while leading. (By the way, another cool fact you’ll love is that he is considered the pioneer of cyclo-cross.) 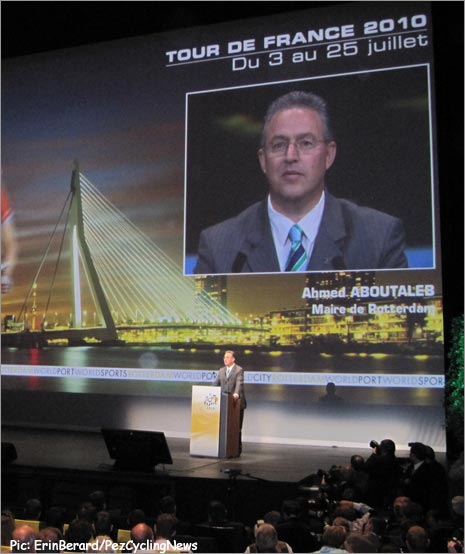 Christian Prudhomme introduced Ahmed Aboutaleb, Mayor of Rotterdam, who welcomed the Tour to the Netherlands for the 5th time (1954, 1973, 1978, 1996). More “bike love” from Holland as the “country of bikes” (factoid: 16M people and 16M bikes), with a promotional video of every type of citizen biking in Rotterdam, although ironically no one in the video was wearing a helmet!

Finally, the route unveiled in IMAX style – following the yellow line as it winds around the map of the Netherlands, Belgium, and France swooping up and down mountains and descending into the flats and valleys. From the windy flats of Europe’s largest port in Rotterdam, to Belgian cobbles, to four grueling stages in the Pyrenees, to one individual time trial through the vineyards of Mйdoc in Bordeaux, there promises to be a road surface for every taste. They will also ride by Eddie Merckx hometown of Meise, Belgium during Stage 2, a tribute to his 65th birthday. 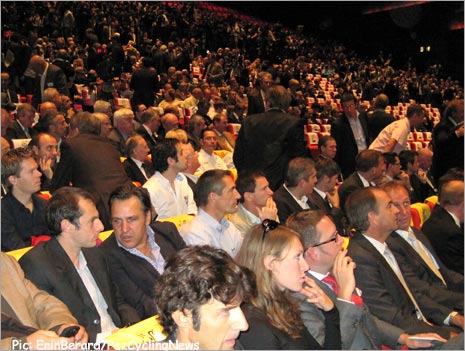 I caught up with some French riders after the show to get their impressions. Stйphane Augй of Confidis exuded confidence in the route, excited by the Pyrenees as he is a native of Pau and he’s an old-timer at Paris-Roubaix as well. He’s off to Senegal for a two week vacation. 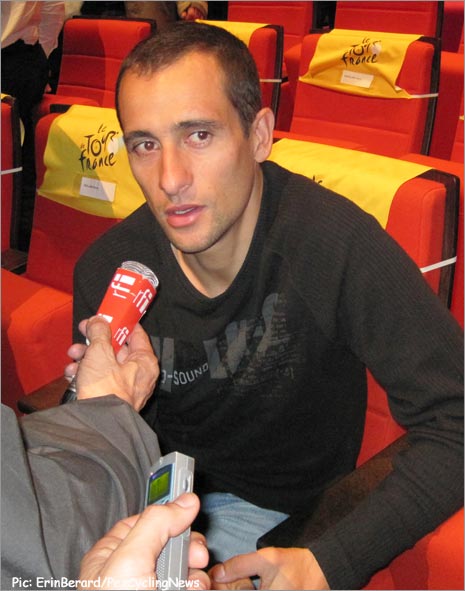 Sandy Casar with Franзaise des Jeux is on vacation too right now but he’s planning to do cyclo cross races in the next few months. He and Jimmy Casper (below) with Besson Chaussures-Sojasun shared concern about the first three-stages and the typical nervous energy at the start of each year’s Tour. Nervous energy combined with flat windy Dutch terrain and cobbles, may wreck some havoc in the peleton early on in the race. 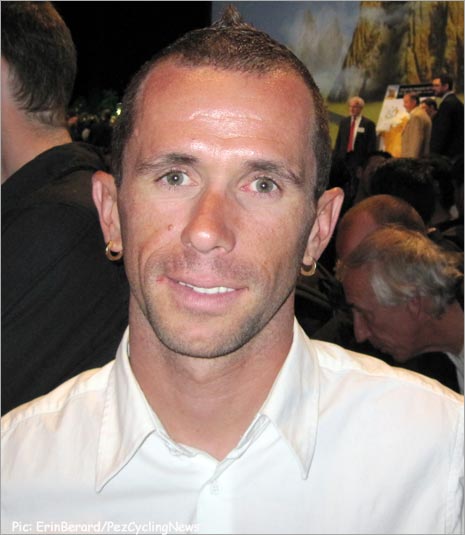 A crowd of press was gathering on the stage around Andy Schleck but I spied Brice Feillu (below), winner of Stage 7 of last year’s Tour, and got an interview. He is looking forward to the mountains and is setting his sights on the polka-dot jersey. His brother Romain and he recently signed two-year contracts with Dutch team Vacansoleil, leaving Agritubel at the end of this season. He has met the new team and is impressed by their recent third place finish in Paris-Tours. Brice appeared humble in his comments in that he hopes Vancansoleil is invited to this year’s Tour. His eyes lit up when discussing a two-time ascent of Le Tourmalet! The French love their grimpeurs, we hope he gets the chance. 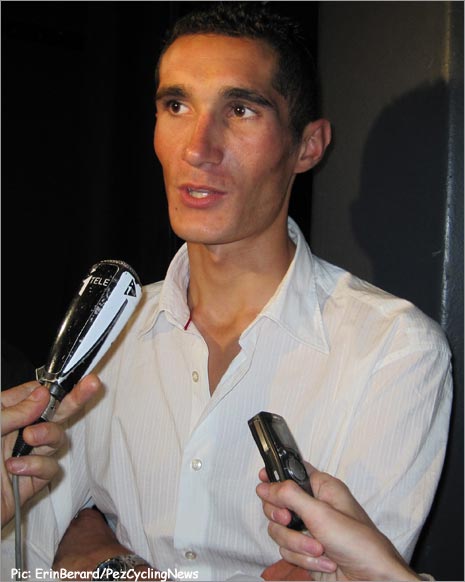 The highlights of the 2010 Tour route include:
• 3 countries
• 1 prologue
• 9 flat stages
• 6 mountain stages and 3 summit finishes
• 4 medium mountain stages
• 1 individual time trial (59km)
• Le Tourmalet climbed twice
• A taste of the Classics and cobblestones (seven sections during Stage 3 from Wanze-Arenberg Porte du Hainaut over a distance of 13.2 kilometers, 3 sections in Belgium (2.2km) and 4 sections in France (11km)
• Stage 15, on July 19, 2010, from Pamiers to Bagnиres de Luchon, will be 100 years to the day that the first TDF riders covered this Pyrenean route (July 19, 1910)
• 2 rest days in Morzine-Avoriaz and Pau
• 23 level 1, level 2 and hc mountain passes
• Ride by Eddie Merckx home in Meise, Belgium during Stage 2
Vivent les sommets!

Stay tuned as we’ve got much more to come from Paris, and the full PEZ-Analysis of the ’10 Tour de France route. 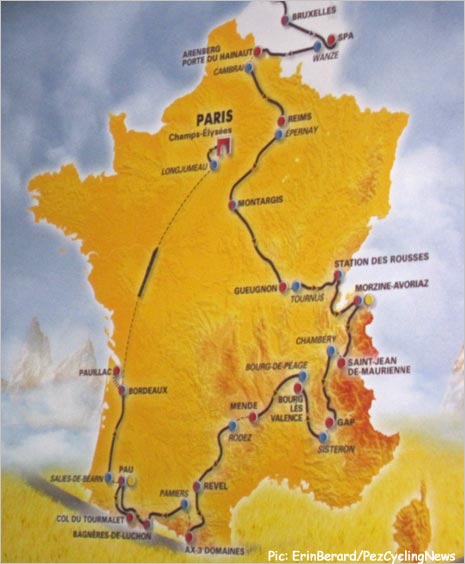