One of the Tour’s traditions is the morning sign on. The event draws huge crowds and provides a chance for the fans to see the riders up close. This is the red carpet of pro cycling and many of the riders make the most of it – using the opp to show off their own interpretations of personal ‘style’. So let’s start at the top and work our way down.

Words and Pics by Randall Butler and Edmond Hood

Never one to miss a story, (ie: create our own), we spent a few minutes recording the coifs for your consideration… We saw everything from bed head to moussed curls, from buzz cuts to never cuts. By the time sign on had finished two things were clear – the dreaded mullet just won’t die and it was the Italians who left the breakfast table early to finish the look. 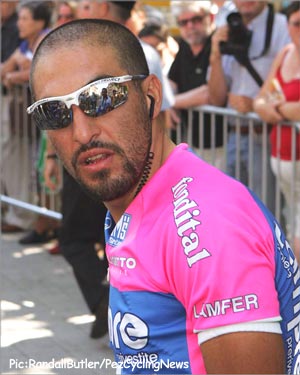 • We’re not sure if Salvatore Commesso shaved just before the race or even if his hair grows at the same speed as the beard. You might say it’s a cultivated look. Still, it works for him. If you were thinking about copying his style – fuhgedabuddit. 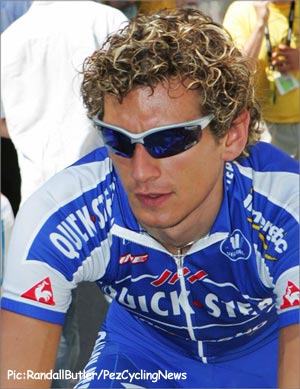 • If you’re Italian and you win Milan – San Remo you can wear whatever you want, who cares if you’re second last on gc? Pozzatto’s got panache and the team truck carries a supply of mousse to help get him through the race. 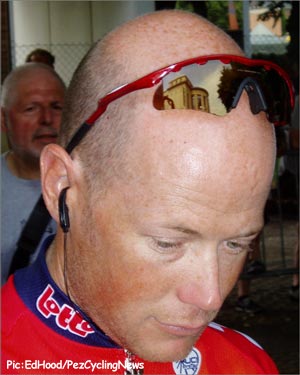 • Some guys have gone the air-cooled route, Chris Horner has left stubble but Stefano Garzelli has gone right to the wood, like Horner says; “it’s no style-statement, just practical.” 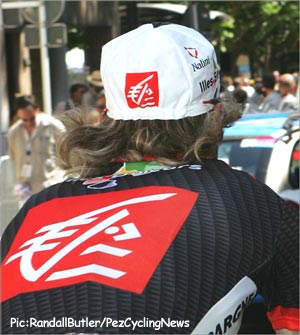 • At the other end of the scale is Vladimir Karpets of Caisse D‚Epargne who has flowing locks and a beard, I asked for a comment on his coiffure in my best Russian and he told me; “nnnnrrrrrrrggggggghhhh!” Apparently they don’t call him Karpets for nothing. We’re not sure if he hasn’t been paid or if he once had an accident involving scissors. 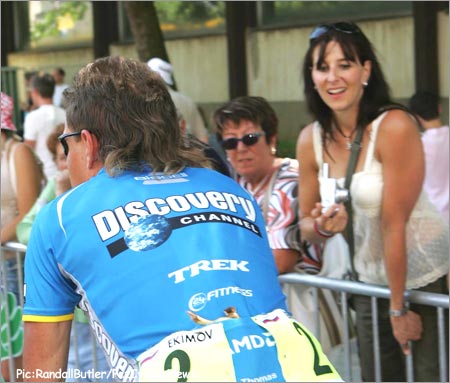 • It’s that mullet again – a look that’s the same age as Eki. Even fans were shocked – well except for that lady in the background – she obviously see something she likes… 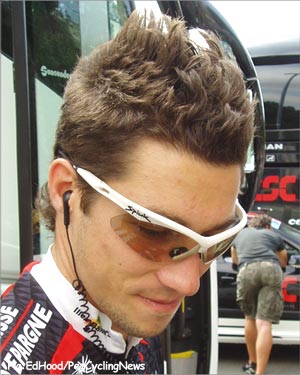 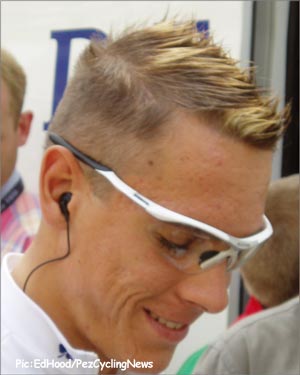 – whilst Gilbert of F. des J covers all bases with shaved sides but a spiky, dyed top. 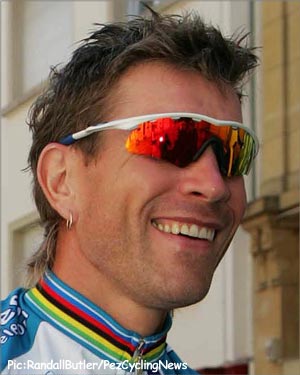 • A man we must congratulate is Laurent Brochard, pioneer of hair styles no self-respecting pro athlete (or person) should wear – maybe that time with the beads brought him to his senses – he’s cleaned up his act and his head looks good, but we’ll talk about Laurent again in a minute. 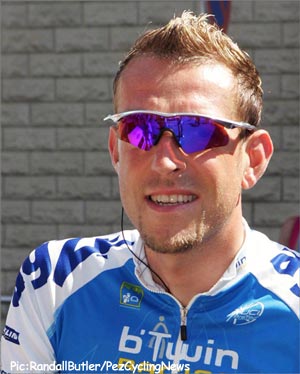 • Christophe Moreau looks pretty sharp here. Meticulously coiffed, colour highlights and just the right amount of gel. Its just that there is something rather Pee Wee Herman about the whole thing. This look might not work if he wasn’t wearing lycra.

• Alessandro Ballan woke up an hour before everyone else to perfect this wash ‘n wear look. Still, it was worth it. If he couldn’t ride a bike like a locomotive he could always saunter down the runway. And what about those shades! 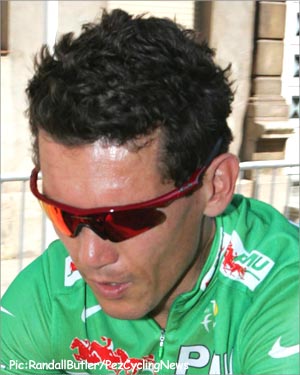 • The Robbie Mac is a true wash ‘n wear – for the man in a hurry. Not much to say about this one except wouldn’t green highlights look good with that jersey? 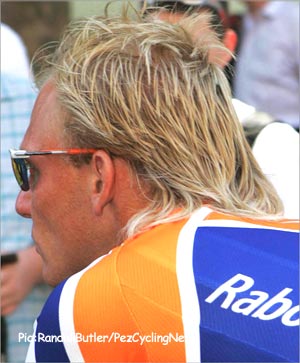 • Bram de Groot’s mullet is doing more harma than gouda. Are we missing something? Is it a case of everything old is new again?

Burns Are Back, Baby! 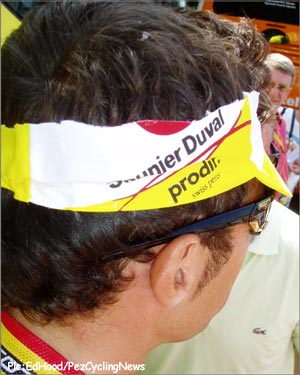 • Sticking with hair, but easing down the head a little – side burns are back, Saunier man Simoni’s caught our eye as did those of Caisse‚ Pereiro, in both cases there’s a little twist, Gibo‚ wears his with a topless racing cap, whilst Pereiro’s are aided and abetted by a quiff and a little gel to the hair. 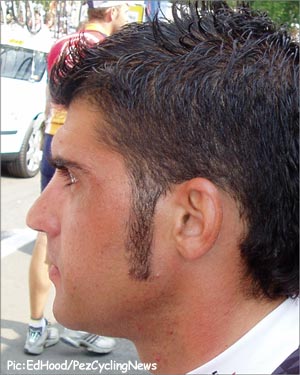 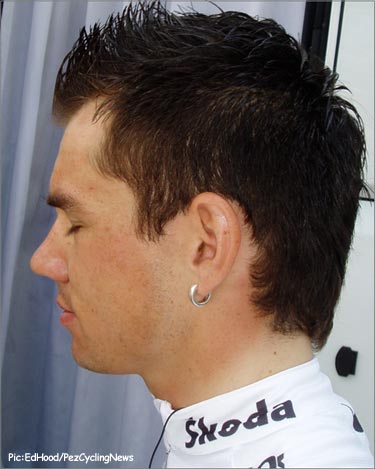 Ear-rings are still popular – Mayo still sports a double number as does Ricco of Saunier whilst current best young rider, Fothen of Gerolsteiner (above) has a single under-stated silver hoop. 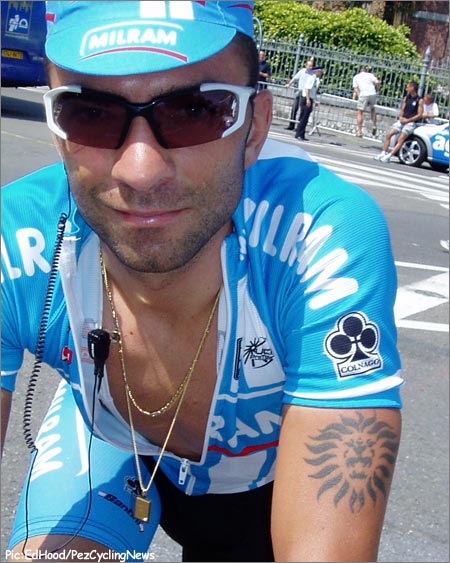 • Among the top-men in the tattoo stakes are Chavanel of Cofidis with his calf and Sacchi of Milram’s fore arm although Fabio spoils it a little with an over-dose of gold chains around his neck – it’s not surprising really, given all that time he spent as one of Super Mario’s lead-out men. 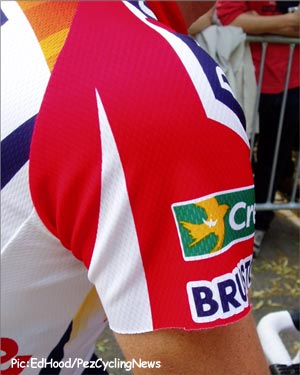 There are some nice jersey cuffs on the go this year, Lotto have chopped theirs off to let a little air up there, 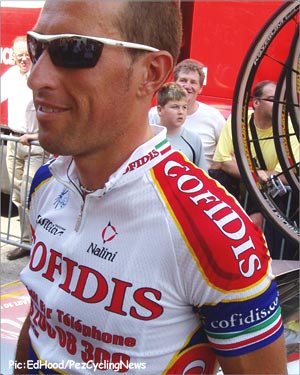 – whilst those Italian bands in on the sleeves of Moreni’s jersey to honour his 2004 win are cool. 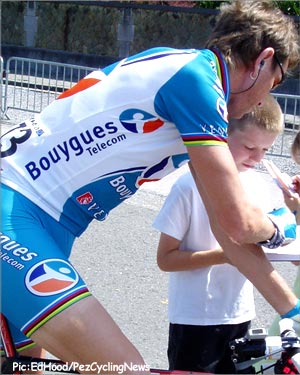 • Brochard has the right to wear the worlds bands to his sleeves as winner in San Sebastian in 1997, BUT we think he’s gone a tad far by putting the same bands around his shorts. 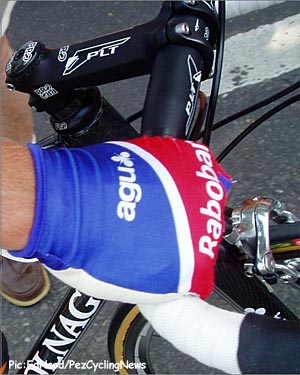 • We liked Boogie’s red, white and blue mitts to match his Dutch champion’s jersey but a lot comes down to socks – easily visible and a sure make or break in the style stakes, 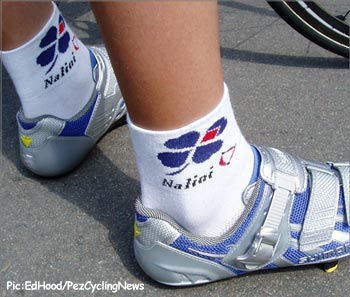 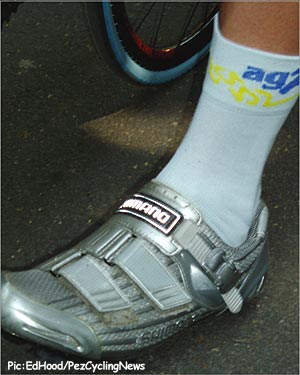 • If you are thinking that Robbie’s get our vote as the longest, there is worse – I can’t bear to talk about them, but check-out our picture of Christophe Moreau’s feet, I used to own a pair of ‘tube-socks’ in the ‘70’s that looked just like ‘em.

So who’s coolest? You’ll have to make your own choice (and live with it!), but we’re liking… 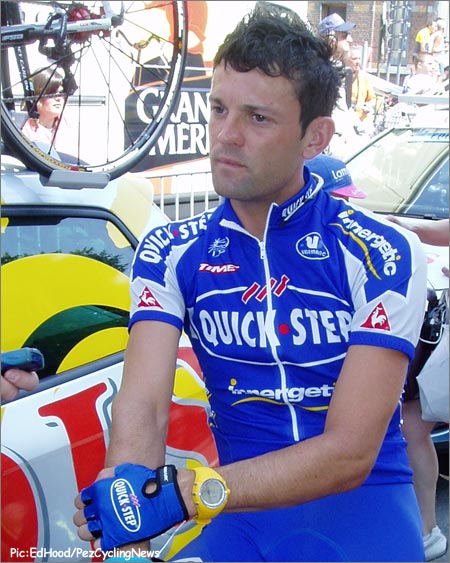 … Cedric Vasseur has a pretty solid style – understated and cool, and is reportedly the peloton’s favorite go-to man for daily time checks…