First off, it’s HOT here in Georgia, only a mere 20oC or so warmer than Halifax, leaving me drinking like a camel at an oasis during our 125 km ride on the last part of Stage 1 today. Here are some notes on the happenings of the pre-race and Day 1:

The Tour de Georgia starts in Augusta a week after the Masters, so the residents were treated to brightly garbed people riding along the streets instead of walking the greens.

The Lance Bubble
The Tour boasts an incredible lineup of ProTour and top American teams, and they were all presented at the Augusta Ampitheater Monday afternoon. Unfortunately, the riders were treated to a less-than-stellar turnout of spectators, with an estimate of less than 50% from previous years. It’s an incredible shame and hopefully something that will change as the week progresses, because the organization is incredible and the racers are certainly keen. So if you’re anywhere in the area and even if you’re not, get thee to Georgia! 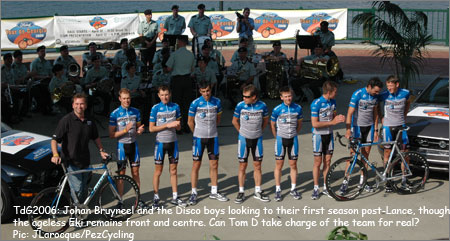 The Home Team
The Jittery Joe’s team is on home turf and obviously eager to give a good show. With that in mind, I caught up with GM Micah Rice on Monday for his perspective on how the week looks for the Bean Team:

Pez: What are the team goals? What will you be happy with for the TdG?

Micah Rice This is the biggest race on American soil, so obviously this is a major milestone and objective for our team. The name of the game is really providing positive exposure for our sponsors and positive experiences for our team. How do we achieve that? I don’t think it’s by riding conservatively and settling for a decent overall placing (top 10). Ultimately, our objective is to get on the podium, whether it’s the KoM, sprint, most aggressive, or young rider (Trent Lowe won the best young rider for Jittery Joe’s last year). The value of our win on Brasstown Bald (with Cesar Grajales) in 2004 to our team simply cannot be overstated, so it would be incredible if we can take a stage.

So the situation is fluid and we’ll play it somewhat by ear as the race develops. Let’s just say that, if we see an opportunity to chase a leader’s jersey, our entire energy will shift towards that.

MR: Trent Wilson has been a tremendous addition to our team in every way this year. He has fit in perfectly and I really think this will be a breakthrough year for him. He spent the past two years riding in a support role for Selle Italia, and this will be his first chance to really take a leadership role for himself. I rode with him this morning and he told me that his legs are spectacular, so I’m really looking forward to seeing him tackle this race.

This is also the chance for our other riders to test themselves. There’s Peter Hatton who’s riding well and can put in a solid ride in the TT, and Jeff Hopkins is our sprinter.

Breakfast with Scott USA
Tuesday morning, I had breakfast with Gary Thornton from Scott USA along with the Prodir-Saunier Duval team. Unfortunately, my fellow Canadian Charles Dionne had to withdraw at the last minute, leaving the team with only 7 riders. However, at least they have a semi-Canuck on the team in Peter Mazur, who was born and raised in Canada but races with a Polish license.

Pez: How has the wind tunnel testing you did after the Tour of California worked out?

Gary Thornton It was awesome how much information we gained from it as a team. The bikes themselves are already really light and aero, but the testing enabled us to dial in the position and also educate the riders about different equipment choices and riding styles. For example, it reinforced the importance of maintaining your head in a stable position rather than waving it all around, as the aero helmet simply becomes a big “parachute” if you do that.

Did the work pay off? Jose Angel Gomez Marchante’s winning the final TT and the overall at the Pais Vasco certainly helps our confidence that it did! 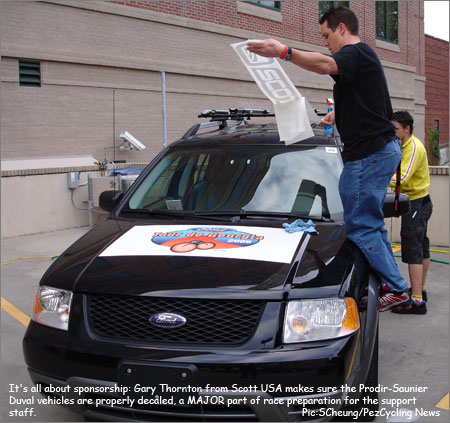 Pez: So just what are the logistics of bringing a ProTour team from Europe here to America?

Gary Thornton Quite an amazing feat of organization really! Besides just flying all the riders and support staff over, we have to basically obtain everything that the team needs once they arrive. That includes vehicles like motor homes and all the supplies for cleaning the vehicles. Then there’s the four big grocery carts full of supplies for the week, along with all sorts of plastic containers for cereal, etc. Let’s just say that the grocery stores and Wal-Mart were pretty empty once all the teams got done with them! We’ve also had to hire some American-based soigneurs, and everything’s complicated by the language barrier of many of the staff. So it’s really a testament to the team and their dedication that everything goes smoothly.

PezCycling is travelling with Discover Adventures at the Tour de Georgia, see their website at DiscoverAdventures.com
Like PEZ? Why not subscribe to our weekly newsletter to receive updates and reminders on what's cool in road cycling?