Team Bicycles of OJAI Get PEZ’d!

PEZ Welcomes Team Bicycles of Ojai as our newest PEZ Newsfeed partner. Thanks to the dedication (and obvious appreciation of fine cycling entertainment!) of the Team Ojai crew, the latest PEZ headlines are now streaming their way into California’s Ojai Valley! But just who are these resident Ojainites? 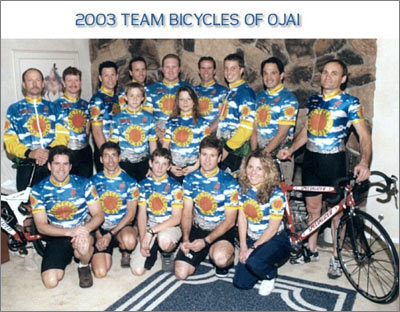 Tell Us A Little About Yourselves…
The Team Bicycles of Ojai cycling club is based out of California’s Ojai Valley, about 25 miles north of Ventura and the ocean. The team has a strong group of dedicated cyclists in Road, Mountain (both Cross Country and Down Hill), Cyclocross and Track.

Our team just hosted the first annual Garrett Lemire Grand Prix in the City of Ojai, to honor Garrett Lemire who was killed in Arizona racing. Garrett was racing for KB Home at the time of the accident, but grew up in Ojai and was one of the team’s first members.

The race a great success. The coarse is a challenging one mile with a good little climb at the mid point of a lap. There was a large pro field and Harm Jansen from RPM won. Next year should be good with some minor improvements. 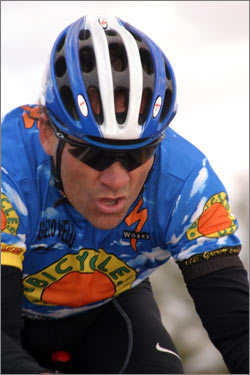 Bob Coble (that’s him right there) is the shop owner, and he clearly knows how to suffer. Coble has a strong background racing on the track. Coble and fellow racer from Ojai, Ryan Yee (Team Monex) recently did the Tour of the Southland in New Zealand.

Another up and coming young rider is Chris Barton. Barton is only 16 years old and is already winning big races, like the Valley of the Sun stage race in AZ for the juniors. Barton has won a few other races and this is his first year on the road. He started 2004 as a Cat 5 and is now racing Cat 3’s. Barton will be one to watch in the future.

Alan Sharon is in charge of the DH Team. Sharon has several strong junior riders. Sharon who also races DH took charge of the team to give young kids in the community something to do. Sharon has really done a great job in taking the time to explain the ins and outs of racing. 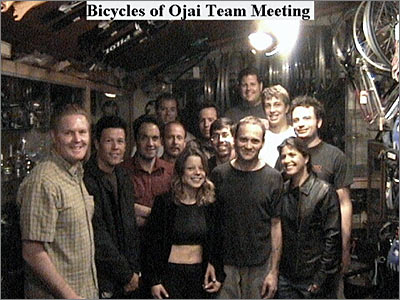 PEZ obtained this rare photo of the first team meeting. No word yet on what the secret hand-shake is though…

You Gotta Ride In OJAI
Ojai has some really great roads to ride, like the Lake Casitas Loop which runs over HWY 150 (West) toward Santa Barbara. This loop is about 40 miles in length and has some good climbs and a long stretch of flats along the Pacific Coast. Then there is the Santa Paula Loop which runs over HWY 150 (East) toward Santa Paula. There is some good climbs and rolling hills. This loop is about 40 miles in length. Another fave is the ride up Maricopa HWY (North) that is very nice. The climb is about 9 miles long to Rose Valley. Great views and you can drop in the backside of Rose Valley and head toward Pine Mountain or have a 9 mile decent back to Ojai.

All of these rides are part of the training group rides that leave Shoreline Cycling in Ventura on Saturday and Sunday at 730 AM.
Anyone wanting more information about the rides can contact us via the website.

So check out their website and join ’em for a ride:
www.bicyclesofojai.com

Get PezCycling News daily headlines for your own website!
It’s FREE and it’s EASY – We deliver our top 10 daily headlines as content for you own site. Check out how to Add PEZ Headlines Now!
Like PEZ? Why not subscribe to our weekly newsletter to receive updates and reminders on what's cool in road cycling?

US Bicycling Hall of Fame: The PEZ Report