Last time PEZ spoke with Phil Southerland and Team Type 1, he was planning to tackle RAAM with a team of diabetics to raise awareness and over $1 million dollars (!) for diabetes research, education, and aid for current diabetics. What was once a far-fetched scheme is rapidly falling into place… We asked Phil just how they’ll do it…

WHY RAAM?
I had a little sit down with Phil to discuss the progress of Team Type 1, but first, some minor details had to be taken care of, such as the biggest worry of all:

PEZ: Phil, you’re a crit racer, you love crits and one day road races, what happened? Why RAAM?

Phil: We wanted to do something that could be viewed as a major challenge. Something to show that wow, diabetes doesn’t have to hold you back from achieving your wildest and craziest dreams.

PEZ: How did you get the idea?

Phil: We were in Carmel, California for the Juvenile Diabetes Research Foundation Ride for the Cure, and we had just done a century, and in my opinion the hardest century I’ve ever done, because there was 30 miles of climbing in it, and I hate climbing. We were all sitting around drinking – what can we do that is real big and on bikes? Someone piped up: we could ride across America, and someone else finished it off: we could race across America. 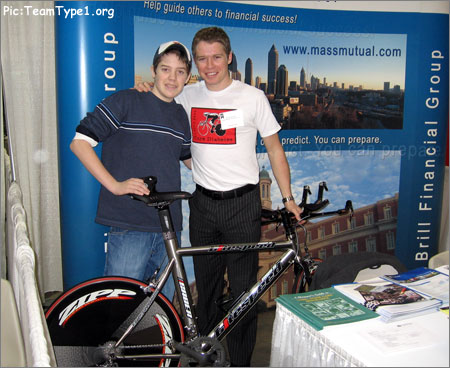 Phil brought his bike to the American Diabetes Association expo.

PEZ: So once again, another wild scheme can be blamed on the happy feelings associated with a lack of sobriety. When did you realize that you were going to have to TIME TRIAL across America? Did you forget that you hate those too?

Phil: Um, yeah, it took me a little while before it dawned on me what I had just gotten myself into. But, hey, it’ll give me a chance to improve on my time trialing, and to show that if you take the right steps you can overcome anything.

PEZ: That sounds a lot like your message for diabetes…

Phil: Time trialling is just like diabetes for me, with the right adjustments I should be able to do it…maybe…hopefully.

PEZ: RAAM is a damn expensive undertaking – how did you go about finding support, what have you pulled off?

Phil: Finding sponsors? Yeah, that was a lot of hard work, but it’s paying off. Between our sponsors, we’ve pooled approximately $375,000 dollars. There’s a lot needed for a campaign this size to do RAAM: 30 people – eight riders for Team Type 1, and support personnel will all fly to California, RV’s, wheels, people, food, gas, etc. The numbers are enormous.

PEZ: Team Type 1 is definitely not hurting in the equipment side of things – what companies stepped up to support TT1 for RAAM?

Phil: Hincapie will be supplying all of our clothing. We are also going to be able to experiment with Zero Gravity’s new cranks, which are purportedly the lightest and stiffest on the market, well, not quite on the market just yet. (The Jittery Joe’s/Zero Gravity team is hoping to be on the cranks come Tour of Georgia). Zipp is providing us with some wheels to keep things aero, fast, and light. Litespeed is hooking us up with bikes – Siena’s for the climbing portions and Sabres for the long, long time trial. 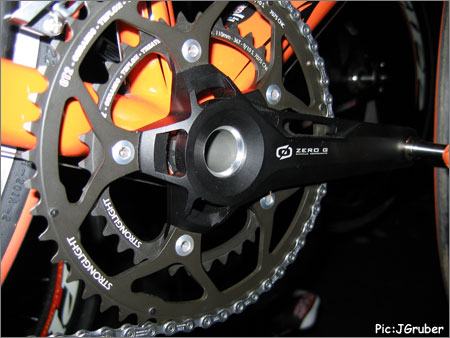 The new Zero Gravity crank would be a nice addition to any bike.

Phil: Yep. That’s huge. Without Litespeed, we might not be doing RAAM, as the cost for bikes, components, etc. would be absolutely ridiculous. I can’t say enough how important it was for us when Litespeed agreed to help us.

Rudy Project is providing us with glasses and helmets, which is cool, because as diabetics we ride our bikes, so we don’t go blind. The glasses protect our precious eyes. On a serious note, one of the biggest side effects is blindness – 55 diabetics per day go blind because of the disease – again, we want to make it heard loud and clear, far and wide, that by living the right lifestyle and making the right adjustments, none of this has to happen. You can not only live a normal lifestyle, you can do some incredible feats, which is what we hope to do by breaking the 8-man team record for RAAM.

BREAKING DOWN A RECORD
PEZ:So that’s your goal for RAAM?

Phil: I can see it now, the headlines: Eight person team sets record for RAAM, but they’re all busted for using needles. No seriously, the 8 person record is about a 19.9 mph avg. The overall record for a 4-man team is 24 mph (set just last year). Our goal is to do it in under 6 days, and hopefully take the record. We’ve estimated that we could save over 12 hours over a team that doesn’t have the same equipment as we do, so that definitely won’t hurt.

Six days would be 144 hours total race time, divided by eight – a little under 20 hours a pop essentially. 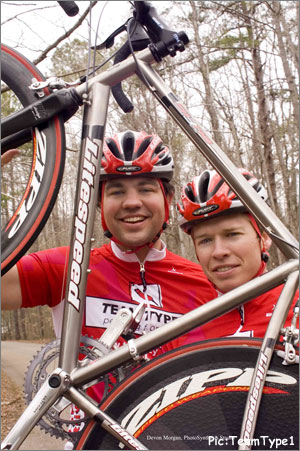 Phil Southerland and Joe Eldridge enjoying the equipment that will hopefully take them to a short ride across America.

PEZ:How will you break up the shifts?

Phil: We’ll break it down into four, 2-person teams – each team will ride for four hours, 30 minutes on 30 minutes off – then the team will get 12 hours rest. Rest will be combined with recovery, sleep, as well as PR work, because we’re planning on talking to the diabetic communities in each sector.

PEZ: No way, are you serious? That’s going to be bordering on insanity after a couple of days.

Phil: It’s going to be a logistical nightmare, but we are going to do it, because that’s why we’re doing RAAM – to raise awareness. We’ll do it…somehow…some way.

PEZ: So you got some big time equipment support – what about financial?

Phil: Abbott Diabetes Care was a big victory for us. Abbott is supporting us in a huge way financially, as well as providing us with a huge RV that will follow us during RAAM and will also serve as a huge roving billboard. Abbott makes the Freestyle Flash, which is the fastest blood glucose monitoring system on the market.

In 23.5 years, I’ve pricked my finger approx 103,000 times and given myself 51,000 shots. The average finger check takes about 30 seconds – I’ve spent a lot of time waiting on finding out my blood sugar levels. The Freestyle Flash has really brought that down – the Flash pulls it off now in only 5 seconds. It might not sound like a big deal, but 30 seconds many times throughout the day sprinkled about at ANY point, is a significant thing, and Abbott is helping diabetics get even closer to living completely normal lives. 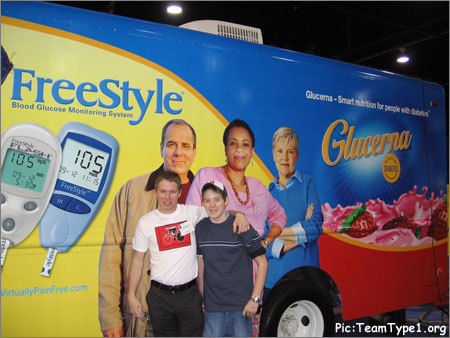 Jittery Joe’s has also agreed to work with us. We’ll be selling coffee, just as the Pro Team does, where the profits will go directly to Team Type 1.

The Weather Channel has also just stepped on board, which is a huge deal, and might lead to other big possibilities, like…

We are currently working on a budget for a documentary on our journey for awareness. It’s still a ways off, as we’d need another $800,000 or so. It would definitely be an investment – short term return and then profitability over the long haul through royalties.

PEZ: So the important things that need to happen behind the scenes are being taken care of – most importantly though, how’s the training?

Phil: I’m still doing a lot base training, which requires high volume at low intensity, but thanks to my E-Caps and Hammer Nutrition I get along fine. I recently had some Achilles trouble, which came from overtraining. I just had tendonitis in my Achilles. Back in December, I started out way too hard, doing a lot of volume with no base beforehand, and then I jumped straight into high intensity work, without a proper base. I was still working on my own at that point.

In recent weeks, Rick Crawford (TargeTraining.com, coach of Tom Danielson and many more) agreed to work with Team Type 1 and he has been a huge help for not just me, but the whole team. He obviously made it known to me that I was training like an idiot – without a proper base, you’re going to get injured, or perhaps even worse, you won’t be able to sustain your fitness, which has a very unhappy result at the end.

Rick has also been a big help for us, as he’s coming up with better ideas for fuelling diabetics specifically, so that we can maximize our potential and realize our goal of setting the record at RAAM. 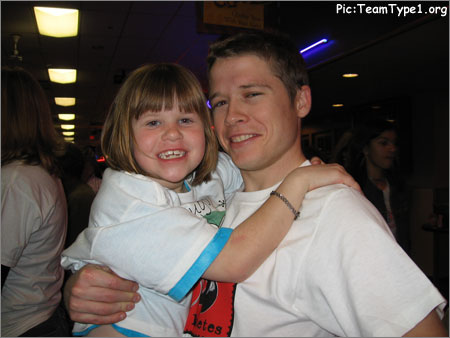 Phil hangs out with Heather (6) who just found out that she’s diabetic 8 months ago.

PEZ: What are your plans for the time being?

Phil: We’re working on getting the documentary together – that’s the next big project. Apart from that, a lot of training, and working to tie up any loose ends. Abbott is going to be so generous as to send some of the team to Children For Diabetes in Orlando at the end of July – I will be speaking there.

I’d also like to use some of my RAAM form to have a go at some big races – a few of us will be doing the seven-stage Tour of Shenandoah at the end of April in Virginia, which should be incredibly hard, but an important step towards our goal of gaining fitness for RAAM.

I also have a long-term goal for Team Type 1. I want it to be a professional team, which will be comprised mainly of diabetics, and one of the goals of that will be to form farm teams in various states, which will have diabetic kids on them – the pro team being something for them to aspire to. It’s a long way off, but so far, even my wildest dreams have somehow kept coming to fruition, so I’m not afraid to keep on dreaming.

About Team Type 1
Team Type 1 is a team of needle junkies. We are the probably the only team in the world who is very open and public about the fact that we all do injections on a daily basis. We are also the first ever all Type 1 diabetic team to compete in The Race Across America. We are doing this because we want to show diabetics world wide that you can do anything and everything a non-diabetic can do, if and only if, you manage your disease.

Our next goal is to raise $1,000,000 for the Juvenile Diabetes Research Foundation. Diabetes for those who do not know is a disease in which the pancreas does not produce a functioning form of insulin. Insulin is the hormone that regulates the amount of glucose in your blood. Due to this fact, we must self regulate, by making a lot of small adjustments throughout the day, be it testing our blood sugar (15 times a day with a Freestyle Flash,) doing injections (7-10 a day on an as needed basis,) diet, and exercise (a bike of course.) Thanks to PEZ for letting us tell our story.

Looking for some background? PEZ spoke with TT1 a few months back.

For more info, head to the Team Type 1 website.