Having worked as a mechanic, driving Team and Neutral support cars on and off since 1991, The Pez talked me into parting with some of my “tales from the inside the race caravan”. Earlier this year I drove neutral support for Mavic at the Tour de Georgia and GP Cycliste de Beauce. 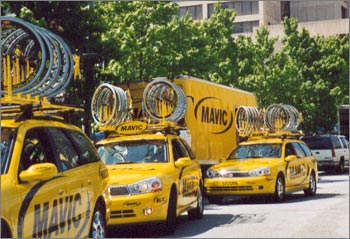 The convoy consists of as many cars as there are teams plus security, officials, (UCI) commissaries, press vehicles and motorcycles. We drove bright yellow Saturns and BMW motorcycles fully decked with equipment. Our “convoy” consisted of up to three cars and two motorbikes (with one pilot and one mechanic), sometimes a VIP guest on the front seat which could be a pretty podium girl or an event sponsor’s representative. This well oiled, underappreciated operation has many moments of craziness, especially driving like I do with my window open (to feel the race), responding to 2 radios and sometimes a cell phone!

At this Spring’s Tour de Georgia, I arrived in Savanah with Tech director John Berlinger and motor pilot extraordinaire and shop owner Paul Rinehart after a 17-hour drive. About 12 of the other mechanics had just driven the 18-foot box truck containing 150 wheels, 10 bikes and tool bins from California, where the first couple of calendar events hadn’t quite gone to plan. Marketing director Chris Zigmont found himself in the precarious position of leading a pack of racers on his motorcycle in one of the women’s races where event security had failed and local traffic had invaded the race course. 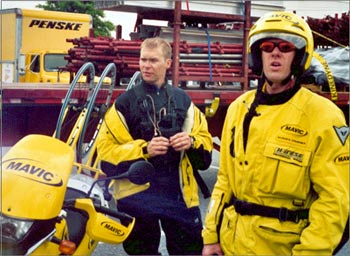 Car assignments are called at dinner. Mavic car 1 is the moving headquarters and always in front of the main field with moto 1, car 2 is usually behind the team directors in the caravan and car 3 (me) is not far behind the opening car. Should the field split, moto 1 first moves behind a break when it gains close to 30 seconds. If the break gets up to a minute, I pull off and move in with moto 1, while car 1 stays with a chase. Since the moto mechanics tend to be a lot busier and only carry a few wheels, two of which are on their harness, they will take wheels as needed off one of the loaded cars as they go.

The order of the caravan cars is decided by the officials and based on the first three rider’s placing on GC every day. The Team cars are also there, usually carrying the team directeur, mechanic, and maybe a sponsor or vip. Besides busying themselves with strategy through the riders’ earpieces, they can’t maneuver like we can. Otherwise you’d have 4-5 Team cars trying to pass each other at once which means one might end up in a ravine. 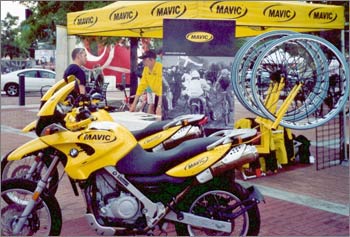 In the Thick of It
The landmarks in Georgia were the finishing circuits. Some were so tight and short most of the caravan had to deviate before the end. Not us. On one of many occasions, my car entered the circuit first since the pack was either together or a break just formed with a slim lead so the maneuverable moto 1 was trailing them. Radio Tour calls us just after car 1 does through our internal two-way radios. A few guys have 50 seconds and gaining. We pull over despite the narrow cobbled road lined with tons of southern tifosi.

A moment, and I mean a moment, after we get behind them one rider needs a bike change. Scott Hodge is ready and jumps out with a pair of compatible hoops. Whoa, now we need to change the pedals. I get out to assist since I know 120 riders are gonna bomb on us in seconds… I throw the rider’s bike in the back seat, no time to fill the empty rack rail, drive up to Scott who looked like Ben Johnson pushing him off, yell to climb in the front seat-by exception.

We had to let a few riders get past us at the next corner and then find a spot to pass ‘em back at criterium speed. All four wheels are screeching and sliding sideways on the hot Georgia asphalt, especially on the small cobbles. It feels like Nascarville and the spectators are overjoyed with the action. 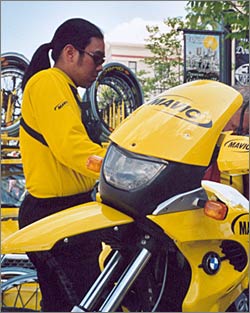 Randy Villanueva surveys a scraped moto that hit the pavement in Gerogia.

There’s No Life Like It
Seven year tech “veteran” Randy Villanueva has been a tech support veteran for seven years, and offered his insiders peak at what keeps him on the road: “Contrary to one Cycle Sport article, most of us, including myself, are volunteers. We work for no pay but Mavic houses us and feeds us during the event. Some of us, like myself and Eric, have been doing this a while and are on call for a good number of events including Tour De Beauce and are usually contacted some weeks before the event for availability.

When we arrive, usually then we find out our assignments for the week. Eric is a great driver, therefore is usually driving either the lead car (car 2) up the road or the support car for car 1 (car 3) in the back half of the caravan. Car 1 is reserved for our director John Berlinger and his lead mechanic, Chris Clinton; incidentally, two of the three paid service staff of the company. The other paid staff in Service Course is Chris Zigmont, who is usually my lead moto driver and is also the director of marketing for the USA.

The rest of the crew (there were seven or so of us all
total) in Beauce, are volunteers. We do this either as
a stepping stone like so many other team mechanics
that have come before us to move on to bigger things
or just as a side job because we enjoy it so much, like Eric. I can attest sacrificing a lot but gaining a great deal. The satisfaction that knowing your service makes it back to the race is huge and all of us take our jobs very seriously. Personally, after working Service Course for as long as I have and aspiring further, I couldnever watch a bike race in the same light on TV or inperson again. There’s something about wearing the yellow and seeing it in a race that makes it all worthwhile.” 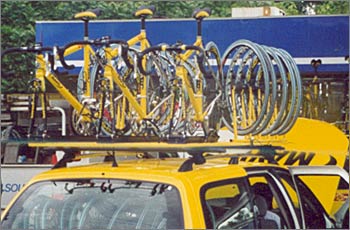 The Daily Grind
Well into the 6 day event (9 for us), we’ve been awaking at the crack of dawn to prep our equipment so to service any rider’s mechanicals during the day’s stage. The bikes and wheels were washed the night before, trued and tuned, 5 pairs of wheels and 3 spare bikes per car of various sizes are loaded on the custom roof racks, not counting wheels, pedals and tool box invading the mechanic’s bubble, always ready to jump from the back seat at a moment’s notice. The Cosmic Carbon with the deeper rim section and bolder decals are always clamped in front of the loaded car roof for better brand visibility.

Life On Camera
On stage 3, Webcor Belgian rider Lionel Syne had broken away for over 100 miles (~4 hours) and being the breakaway car, impossible for us to take a nature brake. As the pack absorbs him near the end, I swiftly break to a halt for the obvious next to another journalist’s car. The same contributor who got pulled out of the caravan for reckless driving, now being chauffeured. He yells something rude in our direction and next thing I know, being so close to the finish, one of his camera wearing allies had me and my mechanic on the jumbotron screen for the world to see while the public was there to witness the last hour of the stage. Nice going guys! 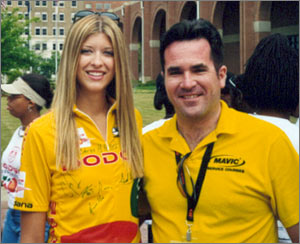 Everybody loves the Mavic boys…

North To Beauce
In its 18th edition, the Grand Prix enjoys some notoriety and selective circuits. With Quebec wanting the first two stages of the Tour de France in 2008 to celebrate the province’s 400th anniversary, the pressure was on to present a great race. We knew the roads were the worst in the world, which often equals lots of wheel changes. The epic stage to Mont Megantic had an unpaved section the town couldn’t get tarmacked in time for the event. As we neared what seemed like an interminable section, it was decided to send car 2 past the pack and create a pit area, the driver becoming a mechanic as well. No cars could’ve gotten to a rider in time in case of an imminent mechanical.

This is the kind of genius stuff Mavic improvises in the heat of the action. Since the race had a different UCI chief commissaire than Georgia, the caravan diagram often changed and this one was a classic example. In one instance I thought I was delirious as history was repeating itself in the same year and I had to gesture like crazy out of my car window so local traffic wouldn’t run over the two breakaway guys we were covering. Later I realized we had 50% fewer cops rolling in the convoy on motors than down South.

It was decided with Mavic 1 I alert Radio Tour of this hazard since I was there and speak French, something we prefer not to do since we’re only supposed to listen to directives, not clutter the air waves. No one responded to my educated observation. Nice going guys! I was relieved the head commissaire liked me enough to let me know we all did a good job out there. It’s all part of the race and is a lot more than what you see on TV or in most cases, read about!