In our ongoing efforts to make you smarter, we’ve pulled on the protective eyewear and lab coats to better understand the scientific long formulae and multi-syllable words that explain the drug better known as EPO. Our own James Hewitt reportedly guzzled gallons of coffee sifting through the scientific ‘mumbo-jumbo’ to present a PEZ-guide to EPO, so you wouldn’t have to … down the coffee that is…

EPO – What Is It Good For?
The recent Amgen Tour of California has highlighted the title sponsor’s role in relation to one of the most prominent drugs in the endurance sports world – erythropoietin. Amgen scientists first developed genetically engineered erythropoietin in 1983. They called the compound “EPOietin alfa.” In 1989, the drug was approved by the U.S. Food and Drug Administration (FDA) for treating anaemia in people undergoing dialysis for chronic kidney failure. Technically, erythropoietin is a naturally occurring glycoprotein hormone that is mainly produced by the kidney. It regulates the production of red blood cells. EPOietin alfa is a synthetic version of this hormone that when injected, boosts red blood cell production.

Doping: A Brief History
The technique of infusing blood to supplement an athlete’s oxygen carrying capacity had been used for some years and became widespread amongst endurance athletes following the 1968 Mexico Olympics. The term ‘blood doping’ was coined by the media in the early 1970’s after a Finnish steeplechaser used the technique and went on to win two gold medals at the 1972 Munich Olympics. In 1984 the IOC prohibited ‘blood doping’ despite the fact that no detection method existed. The introduction of EPOietin alfa provided a means by which athletes could increase their endurance capacity using simple injections without the need for time consuming and potentially dangerous blood transfusions. That is not to say EPO misuse is without its risks. The deaths of 18 Dutch and Belgian Cyclists between 1987 and 1990 with very high red cell counts has been linked with the drug. 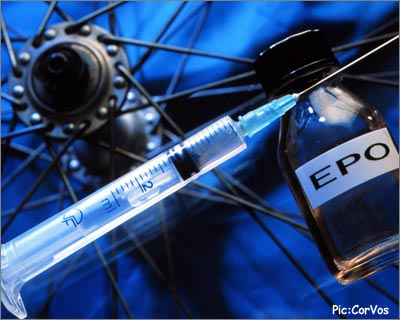 Looking For Clues
In 1998, the Festina team was expelled from the Tour de France following a police raid. Large quantities of EPO were discovered and this marked the explosion of rEPOrts of widespread EPO use in the peloton. The race to develop a test was running in earnest and by the 2000 Sydney Olympics a test for synthetic EPO had been introduced. This was pioneered in cycling in 2001.

The test has been refined in recent years and is based on the fact that Endogenous (produced by the body) and recombinant (synthetically produced) human forms of EPO have different patterns of ‘molecule modification‚ called glycosylation. Simply put, the molecule’s structure and ‘technology‚ are slightly different. This causes the natural and synthetic molecules to exhibit different electric charges. The test uses a technique called isoelectric focusing to separate these molecules according to their electric charge. This takes place on a bed of gel which is transferred to a special paper where a second technique called ‘double immunoblotting is used to identify the molecules further.

This technique has been called into question as it is very much dependent upon the skills of the operator on the basis of a colour reaction with an antibody that occurs in the test. This introduces the possibility of human error. The different molecules are called isoforms: a version of the protein with some small differences. A positive test for EPO is based upon the percentage of these ‘basic isoforms’ in the urine sample. More than 80% is declared as positive for EPO use.

Testing the Test
A number of athletes have questioned the validity of the EPO test. Most recently Roberto Heras but in August last year, Belgian triathlete Rutger Beke had his conviction for EPO use overturned on the basis of a scientific investigation that concluded the he was found to excrete molecules that would yield a positive test due to ‘post-exercise proteinuria.

His body excreted more of these proteins naturally and would push the percentage of such proteins over the 80% limit. The next problem is that the antibodies used to identify the EPO proteins are not specific to EPO. They may react with other unrelated proteins in the urine. These questions were raised with WADA who conducted a review of the IOC’s urine test for EPO. They concluded that it “has undergone an extensive scientific validation…” and that “it is a well-established procedure widely accepted by the scientific community.”

However, in a pre-published study in ‘Blood‚ the Journal of the American Society of Haematology’ on February 21st this year it claims, “these earlier publications missed critical control experiments and were not designed to exclude non-specific false-positive misidentification of other non-EPO urine components”. This is a specific reference to the reaction of EPO antibodies with proteins unrelated to EPO.

In January 2005, WADA issued a directive to make testing more qualitative. This based the criteria on the bands which form on the special paper onto which the gel is transferred following the reaction with the antibodies. Rather than simply declaring a minimum percentage, at least three bands are identified with the two most intense bands being identified to declare the result. This is determined visually or by a statistical technique called densitometry. This validity of this method is contested by some but research is ongoing into the refinement of the EPO testing protocol. Interestingly, last year’s scandal surrounding Lance Armstrong’s 1999 Tour de France urine was based upon research that was being conducted on the samples in the French Chвtenay-Malabry laboratory.

On the other side of the globe, scientists in Australia are developing a new method using two-dimensional gel electrophoresis. The present method of isoelectric focusing only takes place in one dimension, the new method would add a second dimension to the testing on the gel at a right angle to the first. It is hoped that this will increase the validity of the EPO testing method.

So What Have We Learned?
Whilst there are problems with current anti-doping measures, more than ever is being done to combat ‘doping‚ in sport. This article is intended to be a brief insight into the history, current practise and possible development in the field of anti-doping testing for EPO. It in no way is designed to exonerate athletes who have tested positive for EPO or criticize the efforts of WADA, the IOC or the UCI in their fight against those who use banned performance enhancing drugs.